Little Hamaca city park has grown a bit recently and I never noticed until this week. The park is a small area of open space between the Riviera Canal to the north and the airport to the south and one enters off Flagler Avenue right the Urgent Care Clinic, The road into the park is called Government Road and it is long and straight and it feels endless at the mandated 15 miles per hour (25kph). 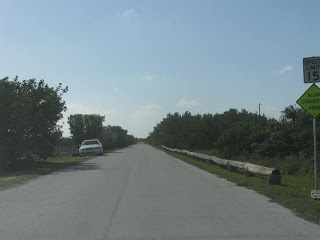 It is used by cars and scooters but it is also a pedestrian path and a bicycle route as well and fifteen miles an hour is a good speed to stick to as you never quite know what you might meet on the roadway in the park: 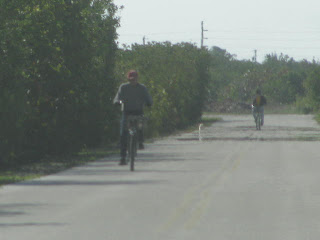 A hammock (hamaca in Spanish) in South Florida botanical talk is a small rise of high ground above the flood plain that allows hardwood trees to take root. You'll see clumps of tall trees among the mangroves all over the Everglades and in the Keys and Little Hamaca in Key West has been preserved as open space for city residents. A good job too. In 1962 this place was a key component in the front line defenses against Cuba during the missile crisis. (As an aside the film Matinée starring John Goodman is set in that period and worth a view). The US military set up mobile missile launchers around key West and also erected towers who purpose I am not sure of. In this period picture from the State Library archives it appears the towers were used to house tracking devices or radar of some sort for the hawk missiles which would be launched from their trailers: 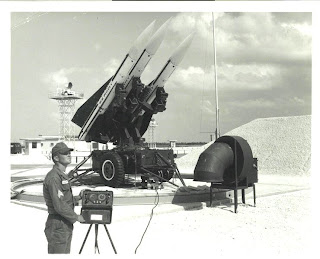 The towers and the buildings and the protective berms are still there as we shall see in a moment. Before we return to the present there was one other Hawk Missile picture from the Cuban missile crisis that I really like. It was featured in the Citizen newspaper a while back and I've never forgotten it. It shows three women and a baby walking past the missile batteries on Smathers Beach apparently unsupervised and without a care in the world. I wonder if these days with all the terrorist paranoia we will ever learn to trust each other again like this: 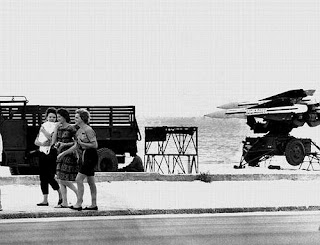 For the longest time the old Hawk Missile base at Little Hamaca was closed to the public. 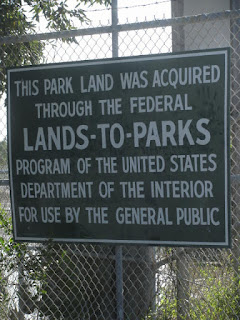 I first came out here on a ride along when I joined the police department. The K9 officer putting up with me in his patrol car brought his dog out here for training, teaching the animal to hunt for contraband hidden among the ruins. These days my more pacific dog likes to stump around sniffing on her account. 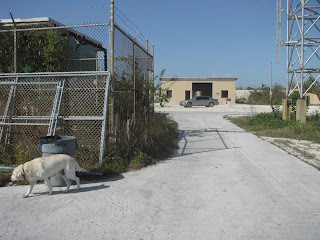 There are tons of these platforms all over the place: 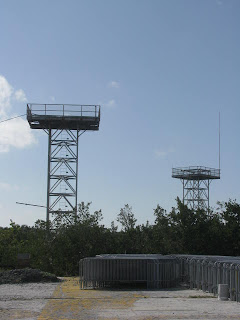 This side of the island (the southeast corner) is rather lower lying and wetter than other parts of the city. The airport runway is built out across the salt ponds, very conveniently pointing right at the center of town to make sure flights in and out pass over the heart of the city at low altitude. 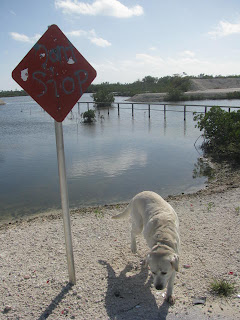 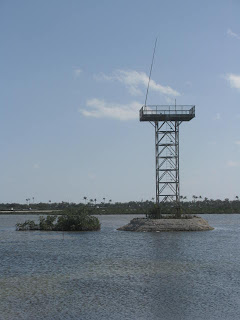 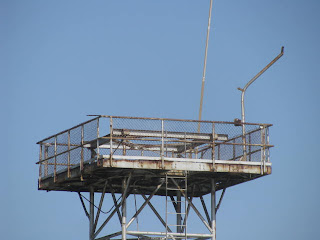 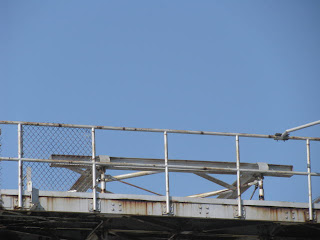 Happily they don't seem to have forgotten any ordinance or left any spare missiles behind but these old oil tanks reminded me of epic industrial struggles to break up monopolies in the early 20th century, lessons forgotten today. 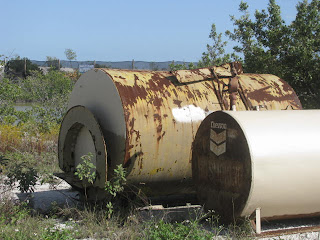 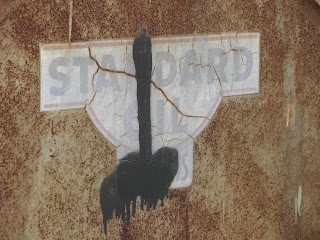 I expect that sooner or later this area will be organized and become defined by what one can and cannot do. For now it is pretty much open to anyone that wants to wander. 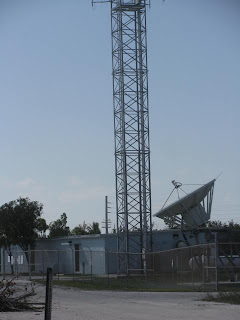 Check out the picture of the Hawk Missile launcher above, for a resemblance. 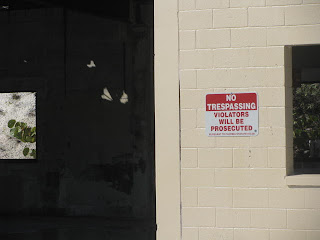 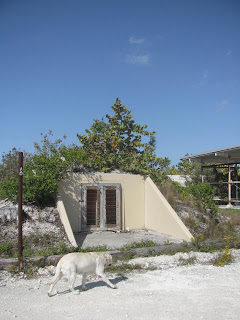 These creatures are absolutely everywhere these days even where tourists rarely tread! 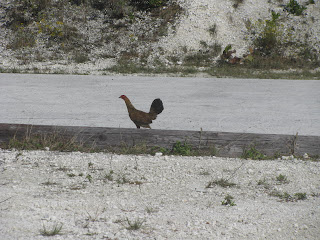 I did meet a few wanderers on scooters and bicycles looking for an exit, of which there are none here. 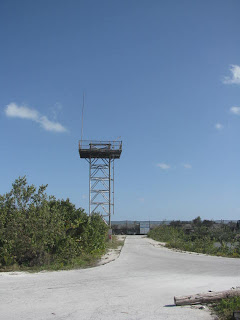 It never ceases to amaze me how a city as small and constrained as Key West manages to find space for so many activities. There are tennis courts all over town, a skate park on Flagler Avenue, the PAL program in Bahama Village and now a paint ball field out here: 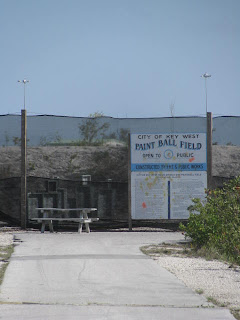 There used to be people complaining about paint ballers in the salt ponds so instead of getting all legislative they built them a place to enjoy their sport in peace. This is Key West though and we do need a fair amount of signage to get through the day. My dog is a daredevil. 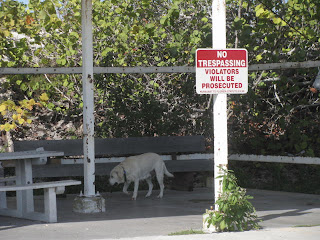 Views are hard to find in the Keys so when presented with a berm rising up above the mangroves, Cheyenne and I were nothing loathe. 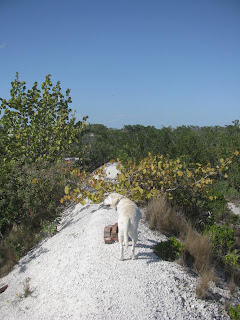 The Missile Farm in all it's abandoned glory, looking west: 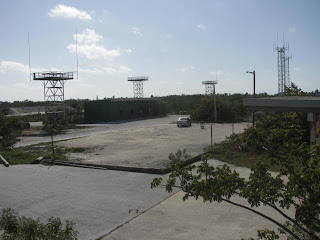 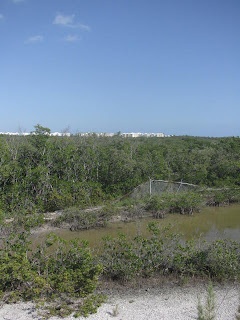 And south at the airport: 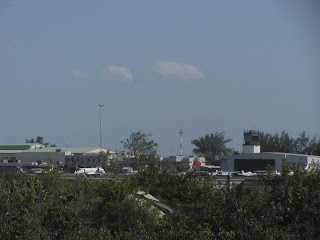 To the north across Little Hamaca Park are the canal side homes on Riviera Drive: 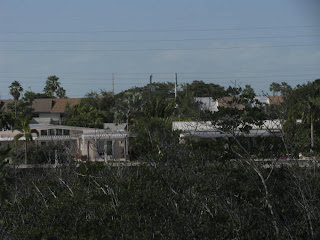 And more antennae to the northwest. It's an absolute forest of them around here. 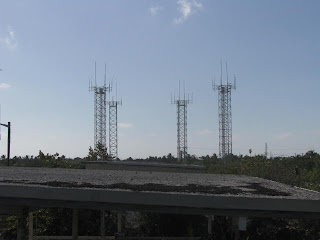 This old monument looks like the southernmost buoy that predated the one currently in use. Perhaps they had nowhere else to put it. 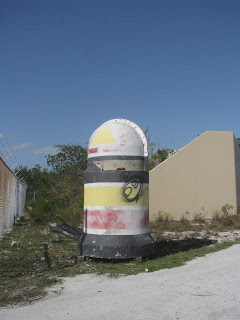 In 1981 when I first rode into Key West the point was marked with a sign but I guess that wasn't good enough as time went by and the city "upgraded" to a buoy. 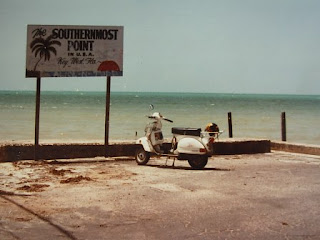 Another reminder to take pictures because things are always changing.
Posted by Conchscooter at 12:01 AM

The towers were to place the various radars at a higher elevation, for more effective range over the horizon. In normal field deployment the trailerized radars would be put on hilltops, if available. The radars had three functions: acquisition, tracking, and electronic counter-measure. There were four of these installations in and around Key West, and the one remaining in the closest to original configuration is on Geiger Key.

Speaking of pictures before things change, did you get a chance to view "The Key West Picture Show"? If so, was wondering your opinion of it.

Thank you Keith.Happily there's always somebody to fill in the historic record.
They show the picture show movie at the tropic at 12:45 saturday mornings and though I have meant to go it is an awkward time for me. Now is hall feel pushed to so do. From what I know the film refers to "before my time." well before.

I got a DVD copy from the Lee County Library - maybe there is one at Monroe County so you can watch it on your own time.

today, your words were sooo gentle, easy on the eyes. It's like being a tourist standing right beside the best tour guide and restaurant critic in the Keys. Must be those relaxing days away from the office..

When treated right from new the P200 was an ultra low maintenance machine. All it took was a couple of ounces of transmission oil every few thousand miles and an occasional scrape of the cylinder head when it coked up. They are indestructible. I think one would be a superb post depression crash get you to work vehicle (spare tire/tyre included).

Matinee is a great little film although I'm sort of surprised you've heard of it. I was going to buy it for a gift for at Christmas but it's going USED for a mint and new is a small fortune! (I checked with BnN...)

Oh and kudos on the picture of the Southern Most Point!! How fun to see it as it was. I would love to post it on my blog... if you didn't mind my linking to it, that is...

Matinee is not even available on Netflix. You can take and use anhything here with attribution. I don't post for profit. I rode the vespa coast to coast and to Mexico in 1981.

You will most naturally recieve credit! Merci! What a great trip-- sounds like fun. I took a trip to India in college but in a safe little cocoon- nothing nearly as interesting as that kind of adventure. Thanks again!

You can't find Matinee on Blockbuster online either! I got it via our fantastic Interlibrary Loan System here. I work at the library and spent some time digging around for it. There were only a couple of copies in the database (a bank of libraries throughout the US and in some parts of Europe which share resources with the Denver Public Library) and it was on VHS. What fun it was!

I was stationed at the Charlie Battery on the north side of the air station on Boca Chica 1974-1976. Life for an Army unit as a guest of the Navy was unique. Our mission was 24/7 and each battery faced a different direction N-S-E-W.

I am a HAWK veteran currently living in Key West, the only one I believe. I feel the HAWK sites in Key West are an important part of not only local history but US history as well. Thanks for posting the pictures and story!

I was the Company Clerk in Battery B from 1961 until I was discharged in 1964. We were originally set up on an old naval gun emplacement site just off the end of the Key West Intl airport. Thanks for this site and the memories.

I now own a business of my own with the help of Elegantloanfirm with a loan of $900,000.00 USD. at 2% rate charges, at first i taught with was all a joke until my loan request was  process under five working days and my requested funds was transfer to me. am now a proud owner of a large business with 15 staffs working under me. All thanks to the loan officer Russ Harry he is a God sent, you can contact them to improve your business on.. email-- Elegantloanfirm@hotmail.com.

By the time I went to Ft. Bliss in June of 1980, 1/65 had already moved to Ft. Bliss. Being stationed @ Ft.Bliss as a 16E..(I withdrew from 24E course) after AIT then Germany 🇩🇪 I remember hearing nothing but good things from soldiers who were stationed at 1/65 Key West. First to fire. SP4 R.R. Smith...AKA Pudd

I was the Commanding Office of C Battery 6 Missile BN 65 Atty in 1967. Lots of memories.