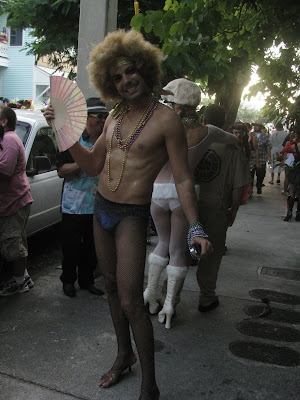 "They had no idea!" Frank Duponty chortled as he held up traffic with one hand and talked over his shoulder to me. "These big biker guys had never heard of Fantasy Fest and they were wondering why there were all these naked men walking around? Hey, it's just another weekend in Key West," we were laughing. It's not really but for those who worry about public nudity and men kissing in public this is not a good time to be in town. 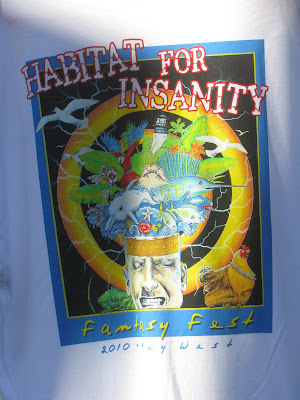 The big parade is tonight when I'll be at work and my wife will be tucked up at home with Cheyenne, a glass of wine and a book. We aren't such big fans of the parade down Duval Street as it consists only in part of floats built locally to local themes. Too many big krewes from the mainland come down and bring their generic pirate ships and ghost trains and add a touch of mainstream boredom to a Key West tradition. We like the local's parade on Friday and we take a wander on Duval before what's known on the program as The Masquerade March. There's lots to see.

Everyone shows up, including some startled looking young men with wide eyes and crew cuts. 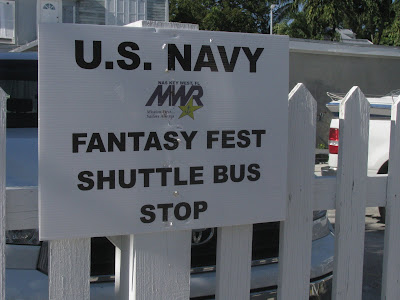 Bead tossing is a big part of the main parade, supposedly to encourage women to expose their chests as the floats pass by. They were tossing beads from upstairs at Fast Buck Freddie's. 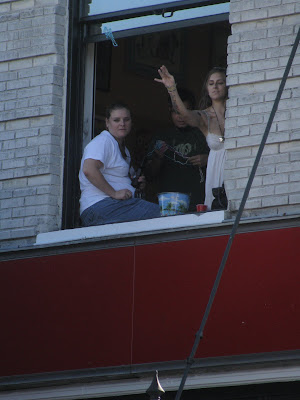 Another big part of Fantasy Fest is to satisfy the need of elderly Mid-Westerners to expose themselves in public. Some do it with humor. 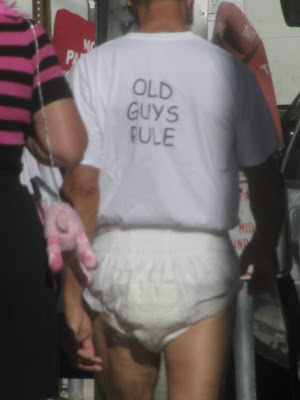 Everyone was ogling the young things offering nude cruises. The rules of Fantasy Fest supposedly require genitals to be covered and female breasts to be at least painted. 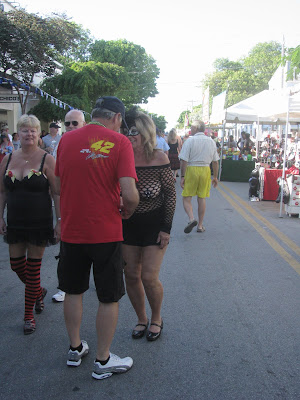 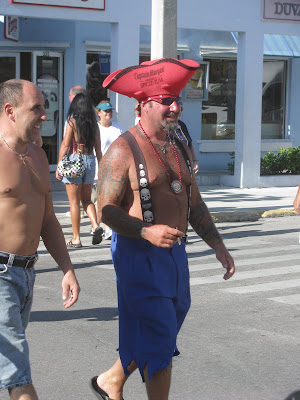 No, really they are. 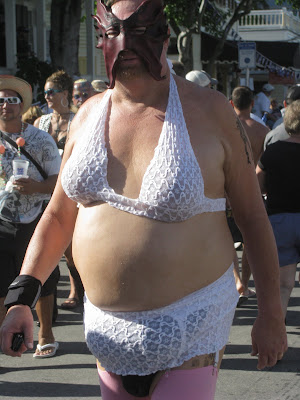 Across the street beer was offered for two dollars without the naked barker.

Horseplay is encouraged and you'd be astonished how good natured it all is.

The street food was back, pork crackling and arepas but we went for a plate of something different. Braza Lena on Caroline Street is expensive so we had a taste for ten bucks. 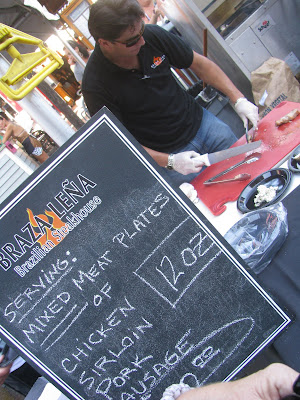 And for dessert we wandered and watched. 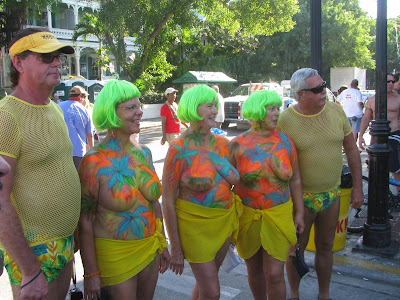 And I watched the old men, my contemporaries, get their jollies with their camera. Sweet aren't they? 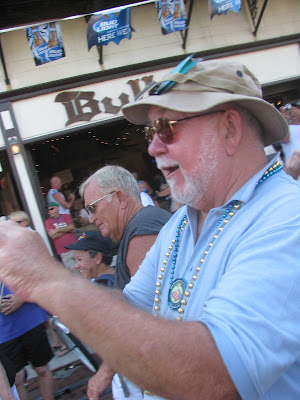 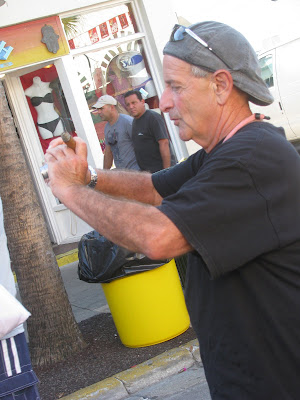 These two looked effective and creepy. 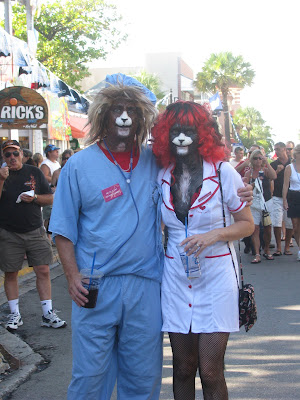 This is gross and illegal.

I figured she had a tough row to hoe, essentially selling ice cubes on a glacier. 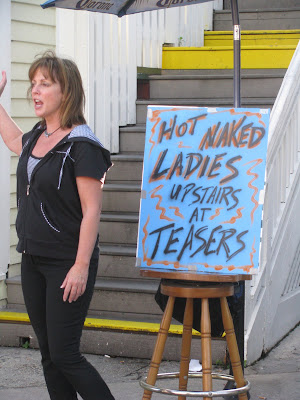 I am always glad I'm just a dispatcher, hidden away upstairs at the police station.

A good day for people watching from the Whistle. 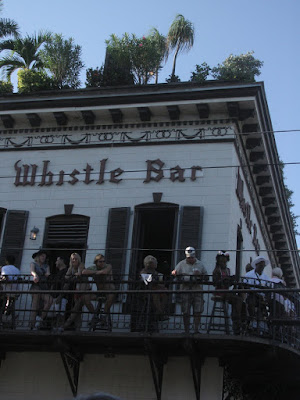 I wondered why she was scratching her butt. 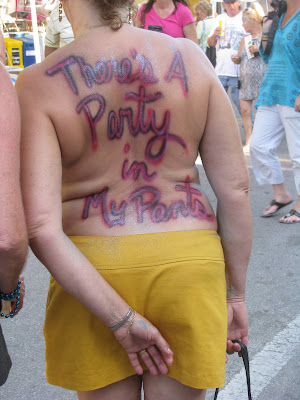 "The Devil made me do it" he laughed. 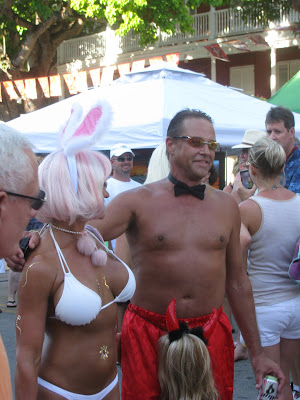 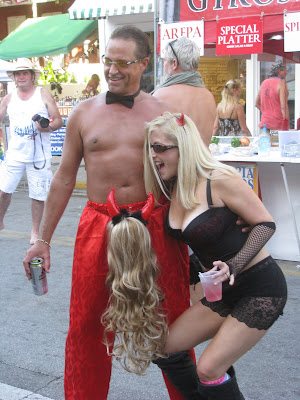 An amiable crowd, lots of food and some rather strange taste in clothing. We left Cheyenne at home, she doesn't do crowds. 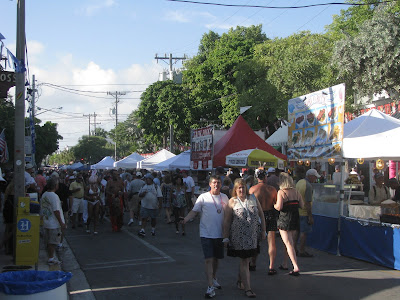 "Five dollar foot long" read his t-shirt. "I wish I'd thought of that " said a passer by. He really did to my astonishment. This guy bore an uncomfortable resemblance to Jack riepe. 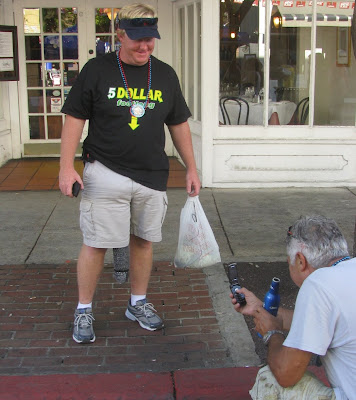 Fantasy Fest is a big deal. It raises lots of money for Aids Help it gets tourists in town during a quiet time of year and this year it got Tom Walker back writing a column in the Key West Citizen. He used to be a regular and is much missed but they gave him a return appearance this week for three of his trademark columns. He doesn't get it all right though. He mentioned in yesterday's column that pink Crocs make suitable footwear for a Fantasy Fest outrageous outfit. If he wasn't so funny (and a sworn law enforcement officer) I'd challenge him to pistols at dawn for uttering such a slur. 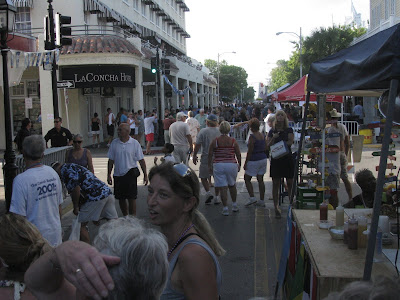 Yup, she nearly hit me with a set of beads as I tried to get a better picture of the bead hurling from Fast Buck Freddie's. He threw me a set as compensation, which I passed to my wife. No harm done! 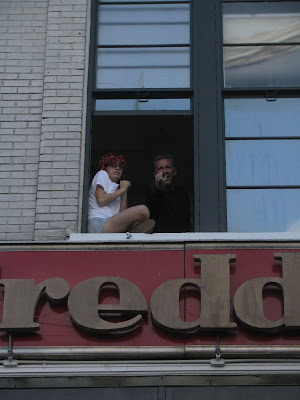 And that pretty much sums it up: no harm done. On Monday I'll have pictures from the Masquerade March which is known to most as the local's parade. 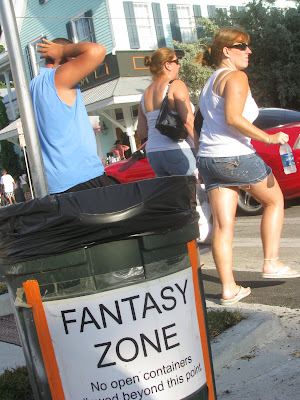 And then it's all over as one crosses out of the modesty-free zone.
Posted by Conchscooter at 12:01 AM 8 comments: Links to this post