Hurricane season is upon us, and it will peak next month statistically speaking but it won't end until 30th November, according to the scientists at the National Hurricane Center. In deference to the season I present Key West's first line of defense against tropical storms: 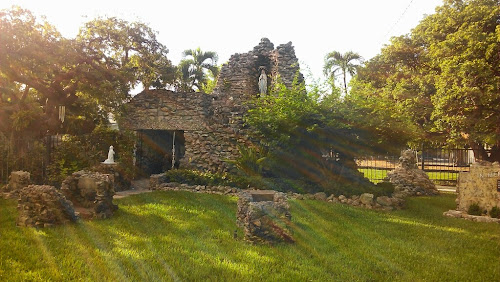 Yup, its the time of year when The Grotto at St Mary's Catholic Minor Basilica gets the attention. I heard on NPR's Wait Wait Don't Tell Me that Gwyneth Paltrow a new age actress, had a conversation with some boulders on a hike and they affirmed her sense of self worth. Call me a philistine but if she needs more affirmation than the obscene size of her paychecks she might as well do the world a favor and get herself into a nunnery. Which could work well for her as she already has a belief in magic rocks. We have magic rocks to beat the band at the Minor Basilica on Truman Avenue. 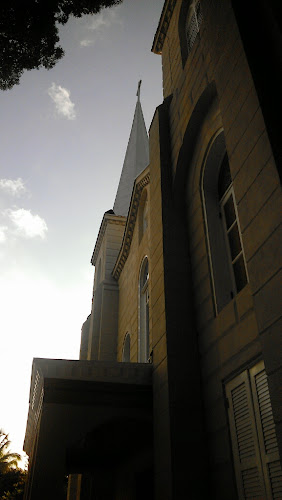 And if you get lost on the way to your devotions there is a handy dandy aerial photo to explain the layout. 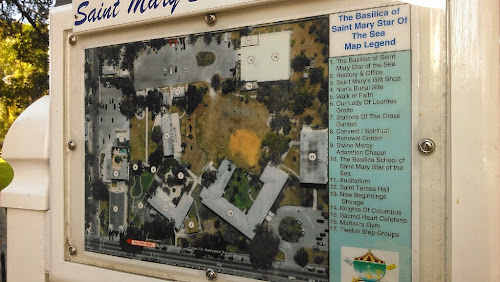 The Grotto, modeled after the cave at Lourdes in France where Our Lady was said to have appeared to a peasant girl and told the 14 year old to get a chapel built there, which she duly did overcoming the sceptical indifference of the entrenched clergy. A miracle indeed. Thousands of free medical cures are said to take place at the original grotto where the local one has no such curative powers (I think) but it is said to repel hurricanes. Power enough you might think. 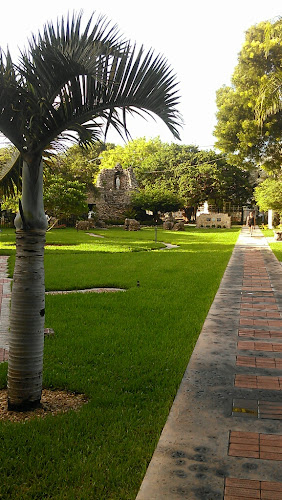 The everlasting abortion debate chunters on here of course, though how one remembers those who never made it onto the scene is a question of syntax and grammar that might defy the logic of any po-faced pedant like me who tries to keep a logical face on a world gone mad. 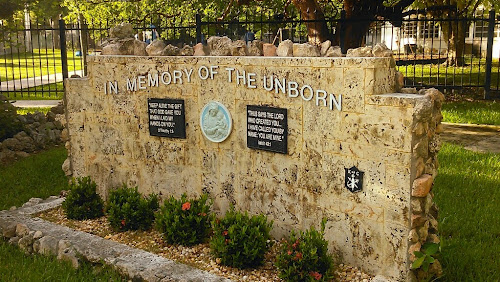 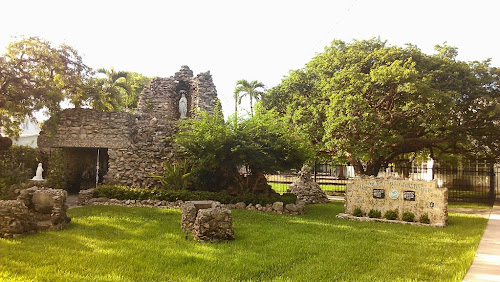 It is charming of course set in perfectly manicured gardens which exude an air of tropical freshness unlike any other place in Key West. And though the Grotto isn't actually Lourdes the votive candles burn bright. I spent far too many years getting a Catholic education in an English Boarding School attached to Downside Abbey so I am fully equipped to move around the Minor Basilica and not make a total fool of myself. Catholicism is a brilliant religion, adopting elements of other faiths and making them seem as naturally Catholic (a term intended to mean "universal") as you would never imagine them being part of someone else's faith. Burning candles in the sanctuary has it's roots in Judaism and burning a candle to send one's prayers up to an eager expectant God remind me of Bhuddist prayer wheels and flags which rotate and flap to the greater glory of their deity. Passover made Easter and the Solstice made Christmas. And we were all brought up o believe it was our own invention, we young Catholic gentlemen. 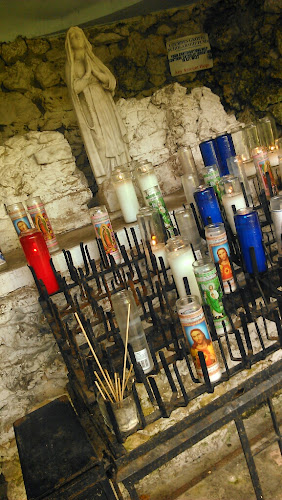 But lest we forget the true purpose of the grotto is to deal with pesky hurricane threats. 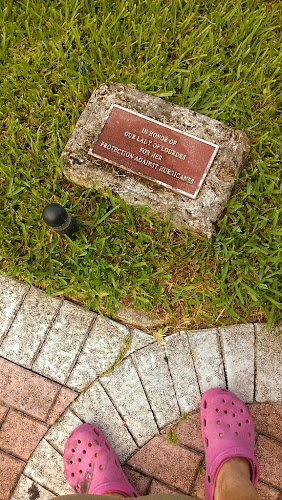 And there is a rather interesting rosary circuit set in the lawn with the stations carefully marked out. I figured it is one circuit for each series of mysteries. Which if you aren't a Catholic might constitute a mystery in and of itself. Muslims hold misbaha, Cypriots use worry beads, Catholics measure the rosary. 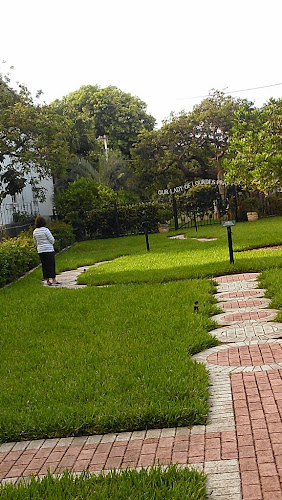 When I was a child we used to thread our fingers and say a little rhyme that started out as here's the church as we folded our hands and here's the steeple as we pointed our forefingers skywards... 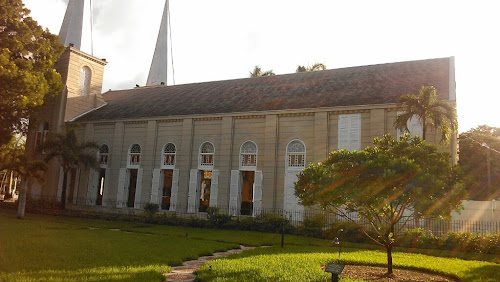 ....open the doors and there are the people as we unfolded our hands and splayed them to symbolize the interior of the church. Silly, but that's all I could think as I walked back to the church, or rather the: Minor Basilica. Which is the official Vatican designation for this rather lovely tropical church. 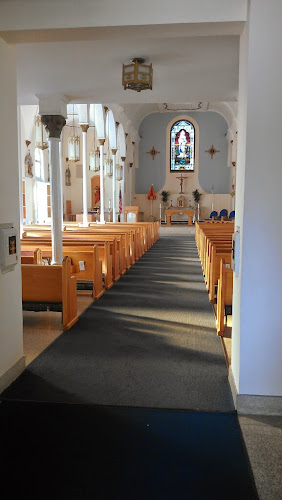 "Spe Salvi" means through faith we are saved which is a translation from a letter by St Paul wherein the suggestion was that we are saved in hope, where hope is intended as trust in God. When I was learning my catcheism the monks used to rattle on about Faith (belief in God), Hope (trust in God) and Charity (love of God), of which Charity was the greatest virtue as it will persist after we die when we will no longer require faith and hope as we will know it all at that point. Until then there is this: 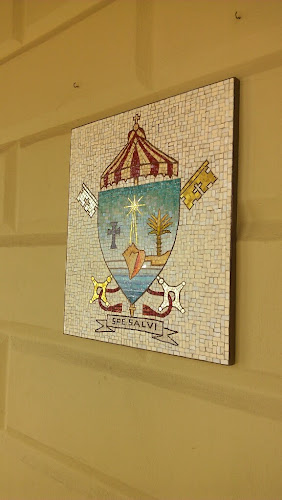 There is a certain pleasure to find a church wide open and unencumbered by locks, open to cross breezes and the warm tropical air. I went inside and sat a while wondering why I'm stuck in the logical minority that sees faith as a form of whistling in the dark. 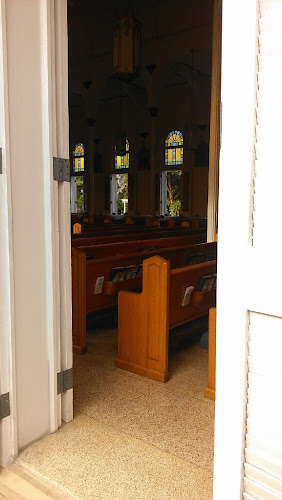 Everywhere I go I see her throwing up her hands in despair. I keep apologizing but I keep coming up short nevertheless. One childhood prayer too many never answered. 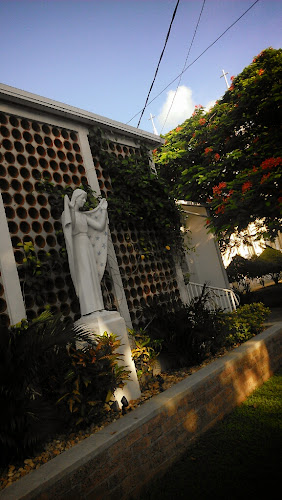 Like a friend said to me "it can't hurt" when I mentioned the nonsensical hope that The Grotto might spare us hurricane damage. Wilma in 2005 flooded half the Lower Keys and caused massive amounts of damage. And that was just one in a number of hurricanes that have done their worst over the years. Logic really has nothing to do with it because the faithful will tell you without The Grotto things would just have been a whole lot worse. Personally I'd rather see the federal Government spend a bit more money and keep the weather satellites rotating properly in space which they are failing to do owing to old age and wear and tear. Or perhaps we can just keep hoping and praying The Grotto will do the work of the satellites and do us the extra favor of smiting the storms in a Biblically fearsome way. Do I get the same magic rock coverage as the faithful? So far so good.