If you want a custom made bicycle wheel this is one of the top places in the country to go. On the right is my nephew Jacob who reports to the owner.

He races cyclo-cross, with a history of off road racing and riding, plus he's worked for Trek and turned down a promotion that would have taken him out of his home town of Asheville.

Jacob is a home boy, married with two boys and the proud manager of an all American factory that makes hubs splines and spokes to top specs. Cheyenne was included in the tour and a dog friendly factory sounds good to me.

They make multicolored spokes to customer specifications out of unobtanium and ship them out.

They hire Americans to do the work in house.

And fiddly manual labor it is too.

Posted by Conchscooter at 8:55 PM No comments: Links to this post

A-Milking We Will Go

Brother in love Bob invited me to go goat milking. My farming days are, I hope, far behind me but I'm fine being a spectator.

It was a stereotypical little red barn that housed the goats and cows out of the fifty degree day and the sudden bursts of wind moaning through the trees like the ghosts of Thanksgiving past.

Celo describes itself as an Intentional Community, a not quite commune of privately occupied homes on shared ownership of land where all community decisions are made by consensus. In this world of families treading lightly on the land the call went out for volunteers to help milk the cows and goats. Bob took one day a week on goat duty.

It is a fussy little barn with copious instructions on how to coexist with dangerous farm animals. I read the instructions and recoiled in terror. Then I remembered this is a place where caution is the byword and normal life can be attempted without necessarily fatal results.

I read the second sign literally and wondered why Bob didn't feed the cows. "I'm a goat milker," he said patiently as though I were slow witted and couldn't tell the difference between this:

With the goat head stuck between the bars and the creature wolfing down breakfast Bob, at the rear, sprang into action first washing the teats with soapy water, much to my astonishment, as I had never seen that done before. Then he got stuck in, in full-on Biblical style.

Silently and with determination he sat alongside his goat and I could hear the results of his labor tinkling into the bucket. He had mentioned previously he was new at this and I was on no account to make fun of him. There was nothing to mock, he worked like a Trojan.

I kept an eye on the food level at the front while Bob beavered away at the back. He said that the goat remains passive as long as the is food to keep it's interest. As soon as the food bowl is empty she starts to kick with sub-optimal results in the milking end of things.

Eventually Bob straightened his back and proceeded to disinfect the teats, another first for me. The elderly milk farmers I knew as a child were far less fussy. Indeed I have drunk milk from horses and cows squeezed directly into the glass, no filters or soapy water involved.

We took the milk back to the house where Bob thanked me for being then lucky charm that kept the milk flowing and the goat still while he tweaked her teats. Perhaps I should have confessed I handed the goat a little extra feed as he tray ran dry and that was enough to hold her interest while he finished.

We had last week's goat cheese and herb spread created by his wife, as an appetizer for our early Thanksgiving yesterday and it was quite pleasant even for me who dislikes the flavor of goat in my food. It was mild and creamy and my sister in law seems to have figured out how to leave the flavor of goat back in the little red barn, where it belongs.

Posted by Conchscooter at 1:21 PM No comments: Links to this post

Nobody could really believe it when the Feds stood up and announced loudly that they owned Wisteria Island. But...but...but e Bernstein family owns it don't they? Not according to the Federal Government which has asserted ownership going back to the 19th century. As reported by the Key West Citizen the ownership was confused by the question of whether or not the island is shallows created naturally or an island built with dredgings from the creation of the deep water harbor. The material dredged is called spoil thus the question is: does that make Wisteria a spoil island or not? At first the answer was yes, allowing the private ownership, now the research says no thus the Feds will have to reimburse the modest purchase price and assume control. Or will they? Local authorities are hoping this scenario will come to pass but no one can really believe the nuisances who claim ownership will be booted out. And the Bernsteins have proved to be a huge headache for local officials. 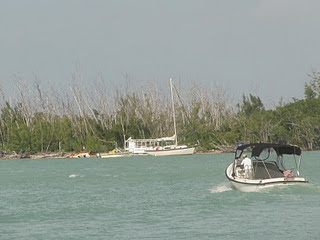 This whole mess started out when the family prosecuted a couple of liveaboard boaters who took a walk on the island and were taken to court for trespassing. The walkers ultimately won their case, but the precedent was set that walking the island was trespassing. After decades of neglect the family had decided to turn the scrubby island into gold. They presented a plan to the county for a whole resort to be built with hotel rooms, cottages, employee housing and as a sop to local people a park. The county recoiled pointing out that land use rules allow but two homes. Which at modern rates you'd think would have made the Bernsteins millions for two homes sharing a private island. But we live in a greedy world and many more millions made more sense to the land developers. Had they accepted the modest proposals they probably would have got away with the ownership and made enough money for an average family to live extraordinarily well in perpetuity. What happened instead was a local land use activist with the moribund Last Stand environmental group got active and single handedly researched the issue and pestered the Feds and threw the ultimate wrench into the works. The problem with development is that developers never give up. Block them and back they come. Block them and back they come. It's a never ending process of wearing down the opposition. However get the Feds involved and then you have to go to the Republican Party and get them to rein in our ultimate protectors. So far the Feds trump all. Well done Last Stand. Wisteria gets to remain public and perhaps little less wild than below or it becomes an exclusive village as see at the bottom, on Sunset Key. 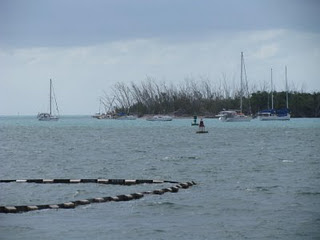 Wisteria's future is undecided but that mere fact is exciting in a world made safe for developers. I hold out no hope for Truman Waterfront, especially now that the Mohwak has been banished anid scheduled for sinking. With the museum gone from the seawall upscale development will be able to move in. The struggle to contain these things never ceases. Happily a false step has exposed a fissure that Last Stand heroically exploited. 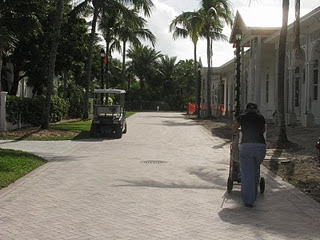 I walked Wisteria Island when I was living on my boat at anchor. It was a musty airless place covered with acidic Australian pines (hence it's nickname of Christmas Tree Island, because to the fevered tropical mind casuarinas can resemble pine trees from a distance) which don't permit other growth. Boaters used the island happily as a place to do boat projects repairing dinghies and outboards, as a place to walk their dogs and as a site for cook outs and campfires in winter. I doubt it will return to that happy natural state but we can now hope that it may be something other than a second Sunset Key. One is quite enough.


Posted by Conchscooter at 11:34 AM No comments: Links to this post


When my brother is law's cousin first came here as a child for Thanksgiving she took one look inside their home in the woods and famously said: Look dad! This is how the pioneers lived!

Now she reads Psychology at Georgia State and passes out on the couch while minding the new generation.

But yes, the interior of my sister in law's home-made home...

...does have a 19th century air, just right for a family holiday. The first time I showed up there 18 years ago I in turn was astonished when the phone rang. Even though I had frequently called the number I was quite surprised such technology reached so deep into the Western North Carolina woods.

I escaped the claustrophobia of many people getting ready for an early Thanksgiving by walking Cheyenne with Mason Bob's dog and a black cat joined us so I tucked her into my jacket.

We walked in silence and I marveled at the bare trees and abundant fallen leaves.

Soon enough we had to get back for dinner...

With salmon this time around. Fair enough, we were having the main meal a day early, might as well break with tradition and have wild Alaska salmon!

A roaring fire, lots of wine and lots of stories. And a warm dog at my feet.

Posted by Conchscooter at 8:17 AM No comments: Links to this post

Conchscooter
Key West, Florida, United States
An archive of more than 5600 photo essays about Keys living since June 2007. My thanks to all those who have made up the 2.8 million views and 20,000 comments received by this page over the years. Please feel free to reproduce any original photo as long as you give Key West Diary the credit.

Live passionately even if it kills you because

something is going to kill you anyway