They came to the Keys for the first time on Friday and people lined up to take a look inside the aircraft that fly into hurricanes. 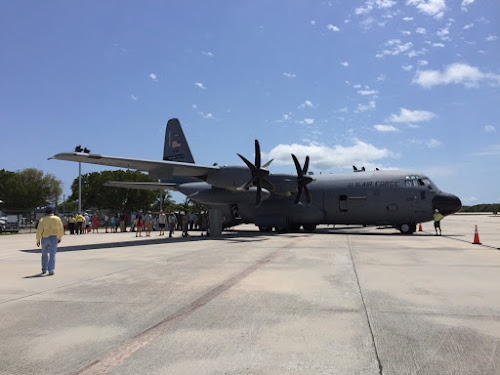 The big gray Hercules aircraft belonged to the 53rd Weather Reconnaissance Squadron based in Biloxi Mississippi and operated by volunteers of the Air National Guard. They operate ten of these aircraft flying into weather systems in the Gulf, Pacific and the Atlantic as needed to measure wind speeds and air pressure in hurricanes. 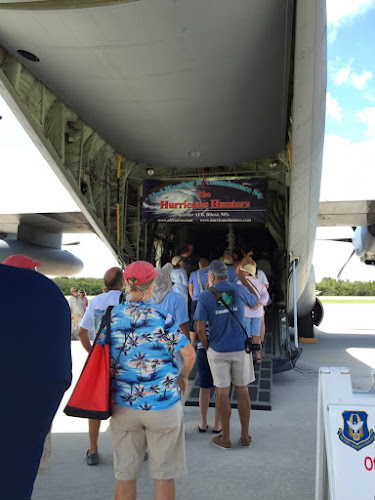 The interiors of these aircraft are spartan and the fact they are capable of flying for thirteen hours doesn't mean the planes are designed with comfort in mind. 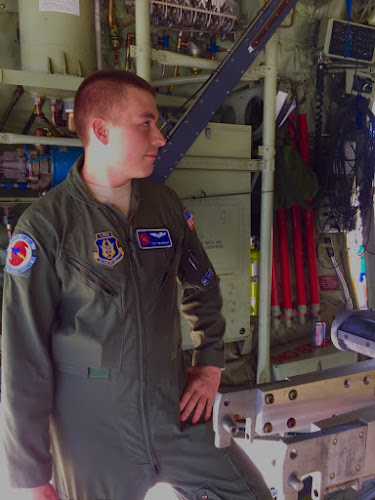 The WC 130 has been in continuous production for forty years and part of its success is due to its adaptability. The interior is designed to accommodate what are, essentially, modular interiors. 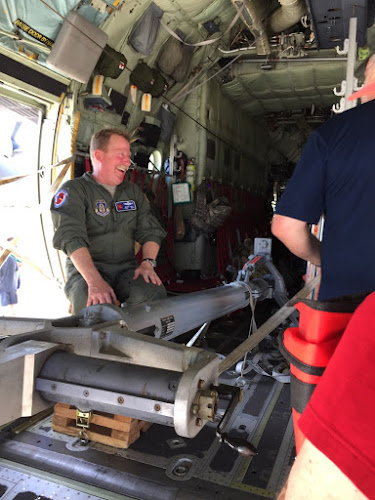 The underwing fuel tanks enable it to fly for extended periods: 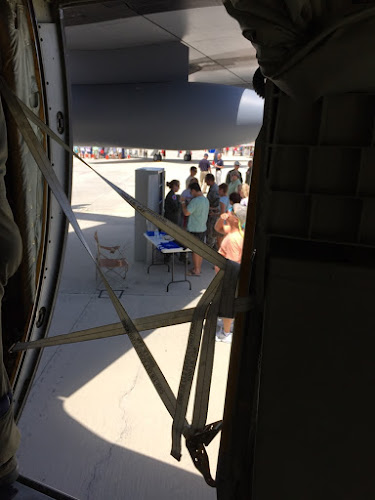 The padding on the walls cover all the various and assorted attachment points for any kind of equipment that may be used. 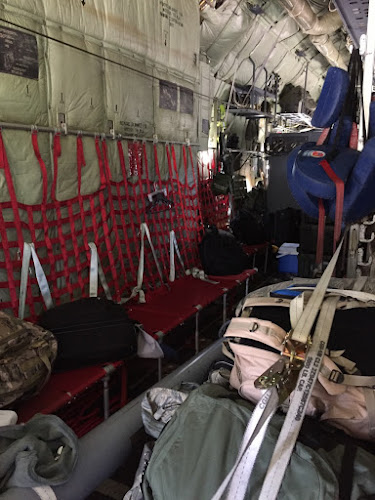 The line of folks I was in was dotted with several veterans of various stripes and the militart hardware brought a gleam to their eyes. 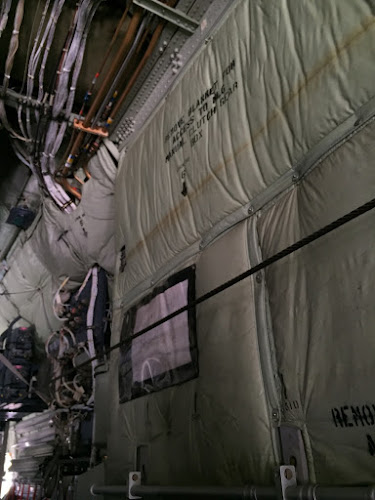 The old dude in front of me seemed rather surprised when the meteorologist on board, Nicole Mitchell, here seen in her Facebook photo, told him she worked for the Al Jazeera network. I found her very informative so much so I failed to get her picture hence the borrowed image of the All American Blonde working for a ...foreign ...network. Social confusion is amusing to watch. 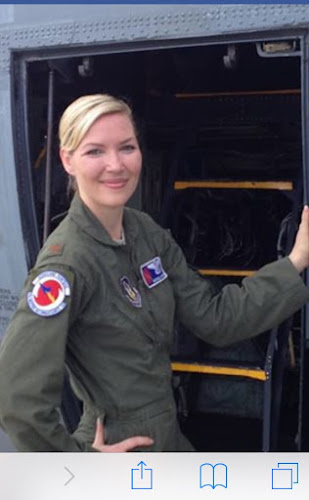 Her work station is this extraordinary collection of electronics which in point of fact is simply a modular unit installed on a pallet and easily lifted out of the aircraft as needed. Nearby she has a metal tube that sticks out under the aircraft for launching the weather collection devices known as dropsondes used to measure air temperature pressure and wind speed inside the storms. 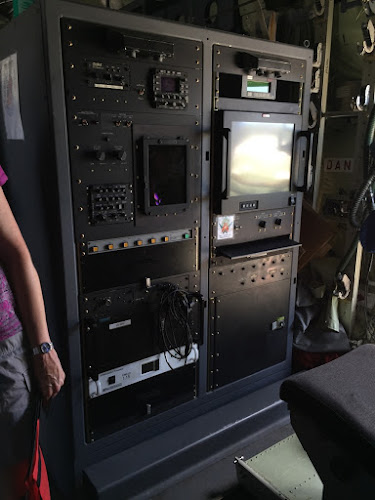 It's amazing stuff, old fashioned looking, robust with no concession to consumer taste or market attractiveness of the equipment. And as you can see here mounted on tiny wheels that slot into the pallet guides on the floor. Mitchell explained the aircraft  can be adapted for use as "ordinary" military aircraft, but other Hercules aircraft cannot be adapted to serve this special role as weather aircraft, owing to their specialized equipment. 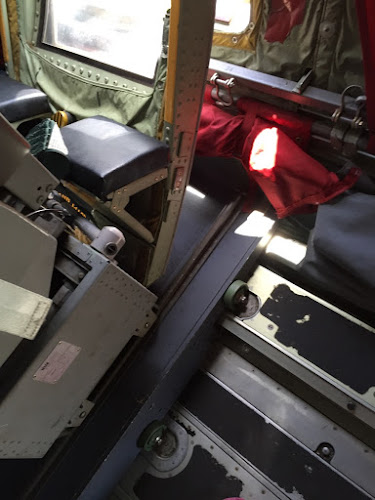 The pilots have a relatively large cabin to work in, compared to commercial airliners but they don't seem to get any perks either in the area of comfort or ergonomics: 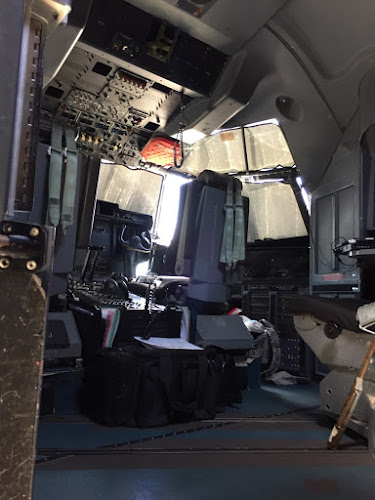 It's amazing to see what electronics really look like in a world where taste and fashion have no place. Strongly built easy to trace and service and replace their wiring looks like this: 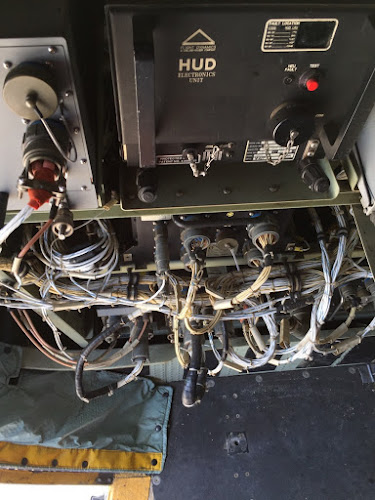 The planes were part of NOAA's hurricane awareness drive as June 1st marks the official start of the Atlantic Hurricane Season,  however no one told Tropical Storm Ana and that weather pattern has been dumping rain and wind on the Carolinas just a tad bit early...but don't listen when people mumble about how awful the rest of hurricane season is going to be. Every years is a crap shoot it seems and whatever will be will be. Which is to say we may get mashed or someone else may but no one knows that far ahead. 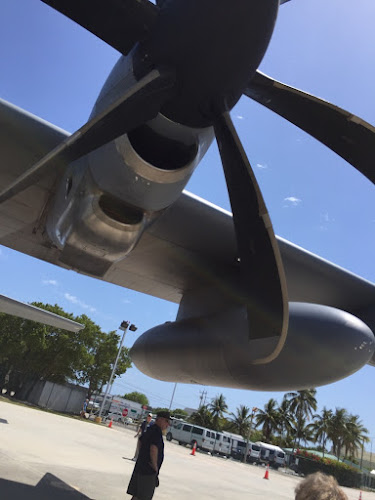 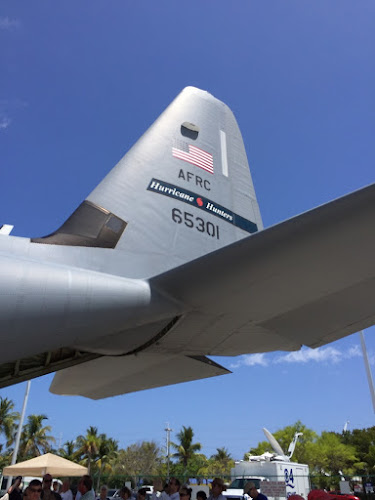 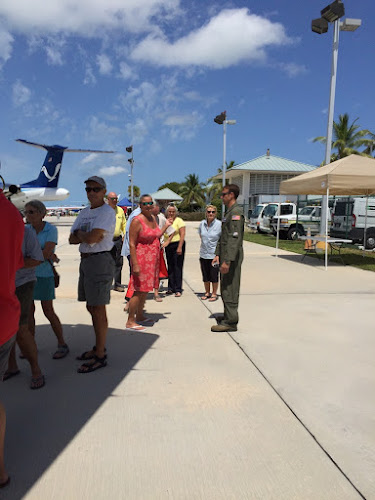 Alongside the military they also had a civilian jet on display, designed to fly 9 miles in the air and pass over the top of weather systems. The Gulfstream 4 was too noisy to air condition and the temperatures were such it was no open to the public. 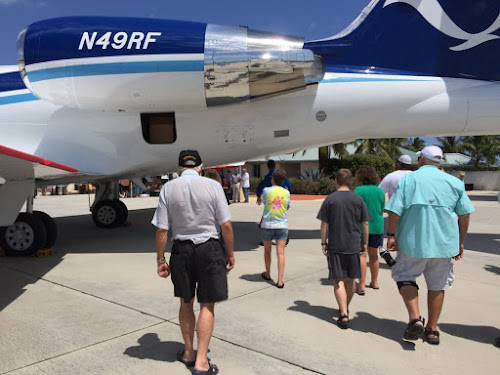 Mechanic Angel demonstrated the sonde drop from the tube under this aircraft, explaining it flies for about twenty minutes after they drop it, sending weather information to a satellite. 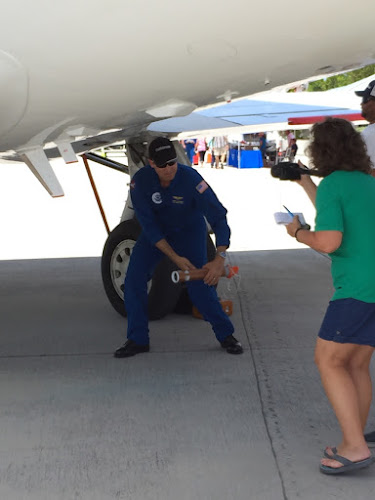 The jet uses up to $17,000 of fuel to fly up to 4,000 miles while dropping these sondes which check the atmosphere every couple of seconds during their seven minute  drop under a parachute. 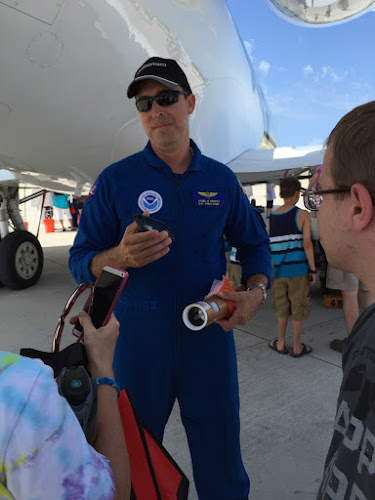 These civilian planes fly all over the Eastern seaboard from their base at McDill Airforce base in Tampa. And they see some pretty odd stuff. Angel showed us  a phone picture of the top of a hurricane a  ball of puffy cotton wool with a big blue circle in the middle marking the eye of a hurricane. 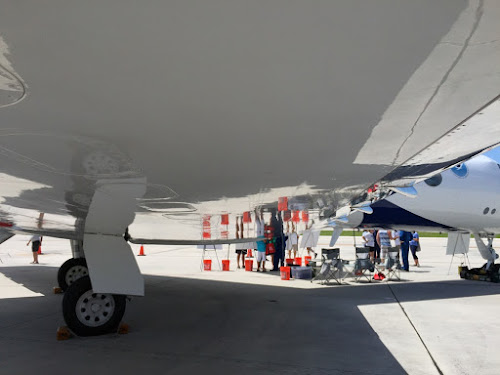 Apparently the art of flying a plane into a storm started in World War Two when British flyers training in Texas wondered why the Americans were packing up and preparing to flee their airbase in the face of an oncoming storm. Those were I suppose testosterone laced days because the Texas flyers got in a plane and flew into the hurricane to see what would happen. They survived and replicated the experiment later to prove the point. 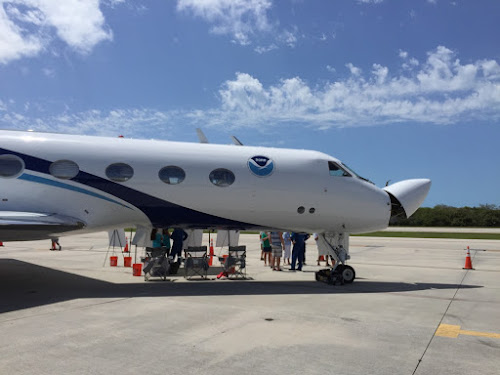 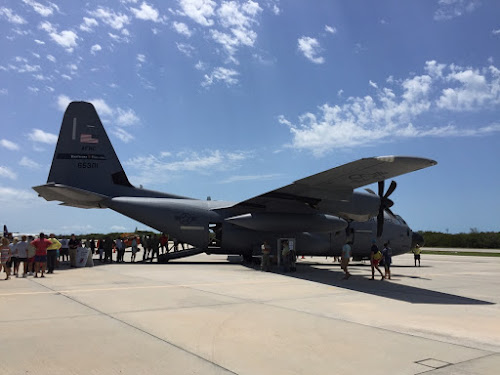 Hurricane season can be a nuisance even though generally these planes give enough warning as part of the preparedness network, so the storms themselves don't have to cause any loss of life with proper preparations in a First World country with adequate building codes and easy evacuation routes. Personally I would rather live through hurricanes than earthquakes or tornadoes or floods. But unfortunately sometimes we have no choice, at least hurricanes give warning thanks in part to these planes.