In discussing our recent four day trip to Las Vegas a friend who likes the place described it as "Disney for adults" which was funny because I had the exact same thought while I took my early Thanksgiving dinner with my wife seated at the edge of the lagoon at the Bellagio resort. A perhaps less flattering comparison came to my mind as we strolled the famous Strip: this place is how Key West should be if it got it's public spaces properly organized. To my own surprise I liked Las Vegas very much. 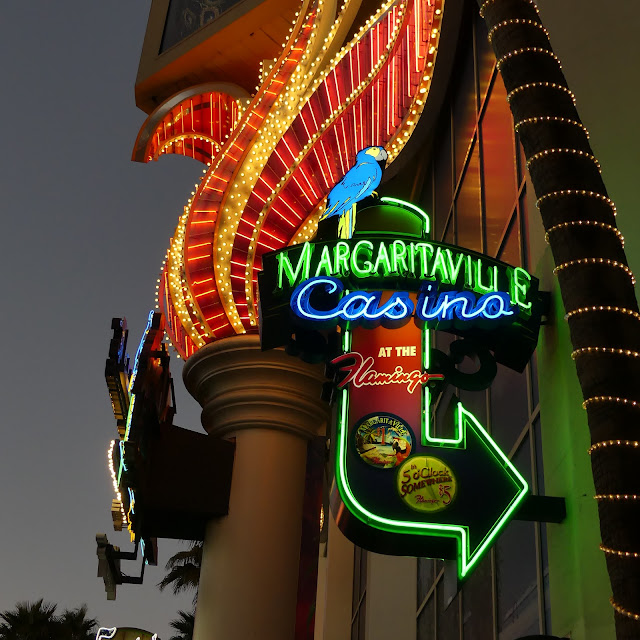 I have visited Las Vegas over the years and have never much enjoyed the place allowing its reputation for sleaze to prejudice my own objective observations. This trip we stayed at a Hilton resort which was smoke and gambling-free, we failed to feed the slot machines and we took advantage of what Las Vegas had to offer with open minds and we enjoyed it tremendously. I want to go back. 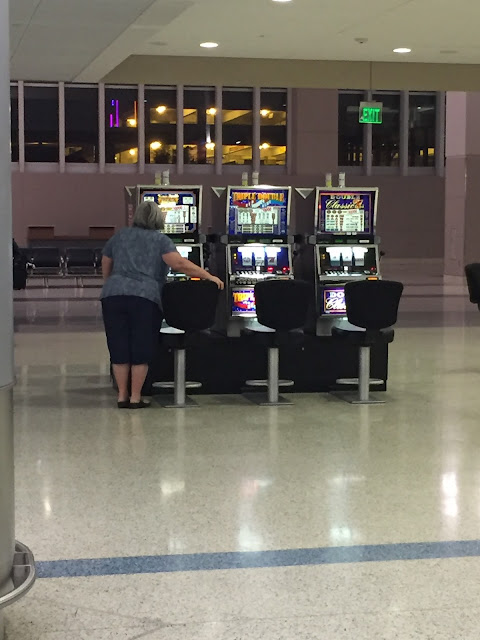 My wife who hasn't been there in forty years was horrified to discover the slot machines take a minimum of  a dollar at the airport...that put her off completely which is funny as her father was an accomplished and profitable poker player. I have no interest in throwing money away, unless it's on motorcycles or travel so we both saw eye to eye on that. On the surface and from the 19th floor Las Vegas is just a collection of random buildings... 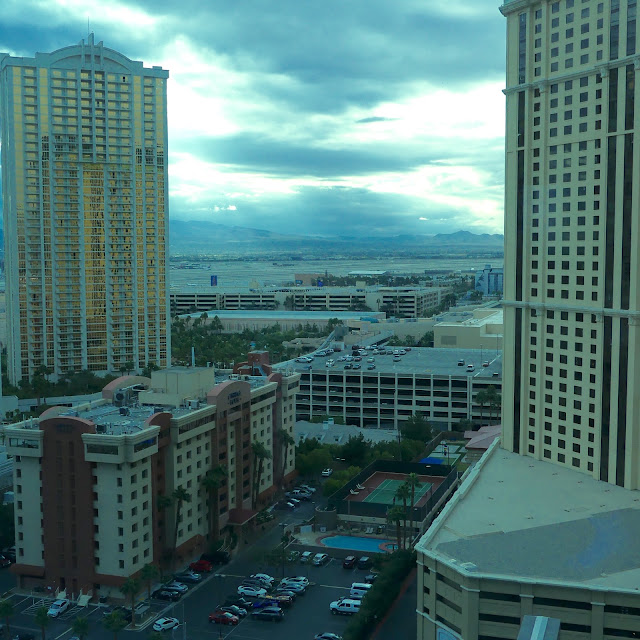 ....some of them strangely beautiful or garish depending on your point of view. But then all of Las Vegas is tasteless and crass, and in that way this place is totally liberating. Las Vegas to me represents the true essence of island time, such as they speak of in Key West. You are completely free to do whatever you want all day or all night. Now they have even legalized marijuana so  I don't know where that will lead. Most places have no dress code, and those that do state as much clearly so you can take the opportunity to dress up, so come to Las Vegas be yourself and no one will notice or care. It's fantastic! 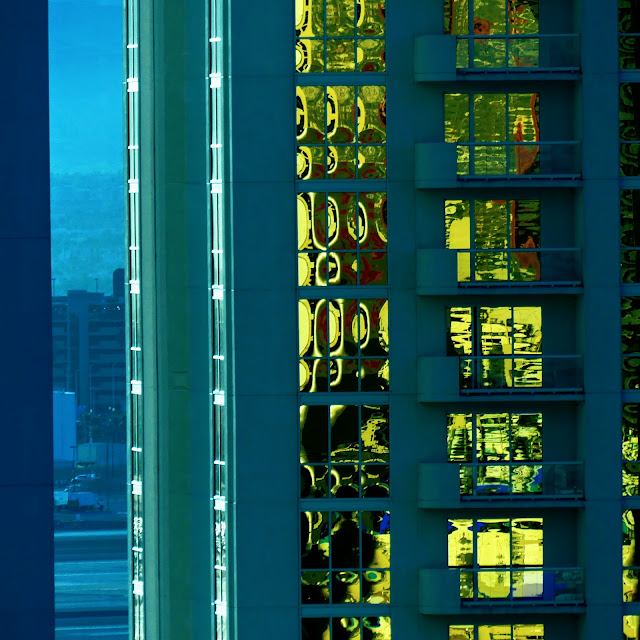 I remember when this place was cheesy neon and free shrimp cocktails and so forth, and there are remnants of the old Las Vegas at least superficially but when we went for a walk on the strip for several hours around dusk we found a place where you can walk at all hours with no fear in a place that is kept clean and spotless and not one drunk did we notice. 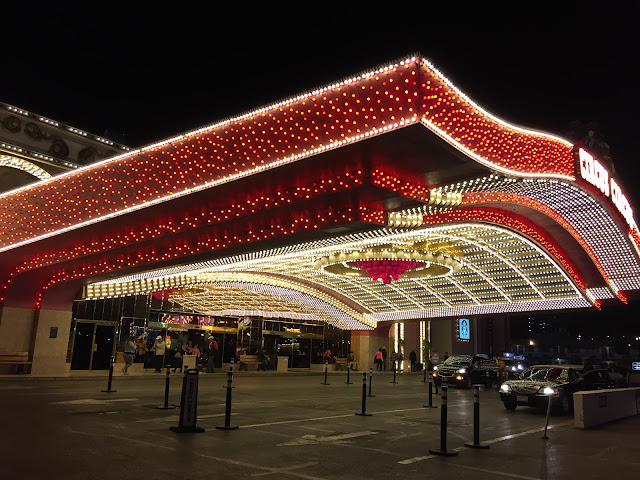 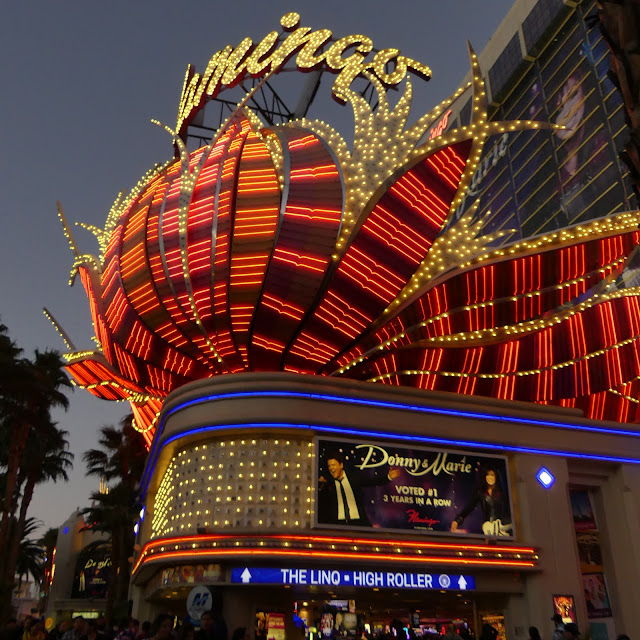 The half size Eiffel Tower... 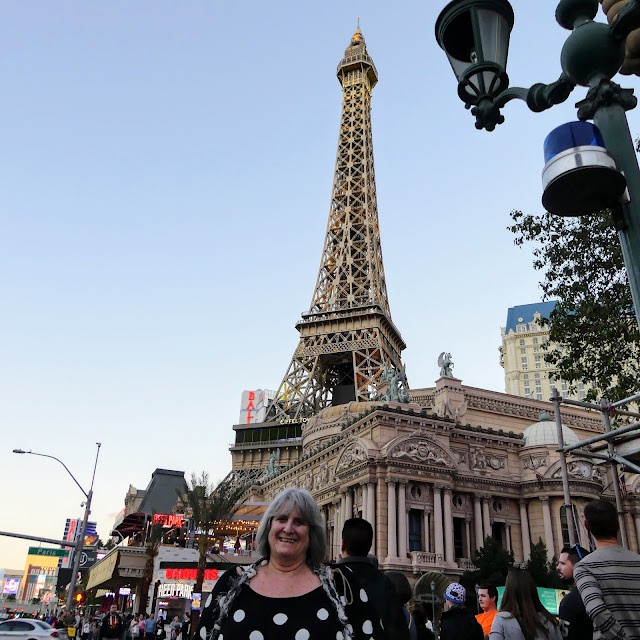 ...the magnificent and over crowded Bellagio resort where I would never want to stay but where the best of the many Cirque du Soleil performances in town was well worth a jaw dropping visit: 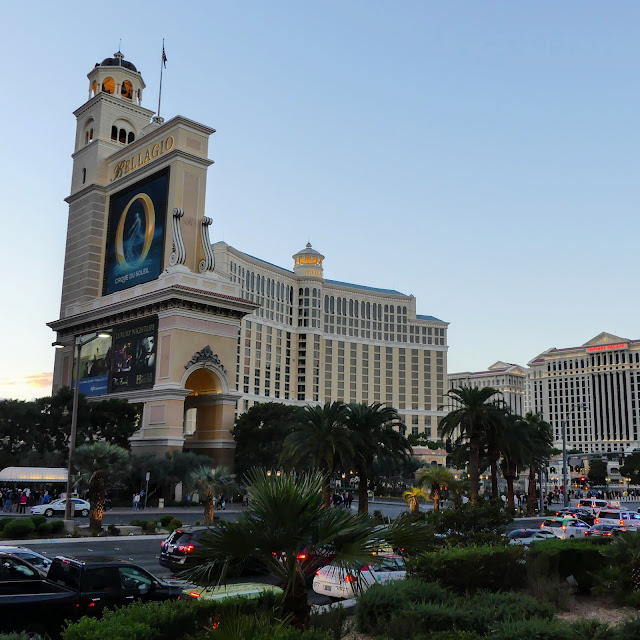 We  ate at the edge of the lagoon our last night. Like I said garish and absurd but totally cheerful and welcoming. One thing I have always liked about Las Vegas is that its a union town and the staff we encountered reflected that with long term employment and loyalty to the companies that treat them well. Tips are appreciated but people get paid to stay on the job and grow with the companies: 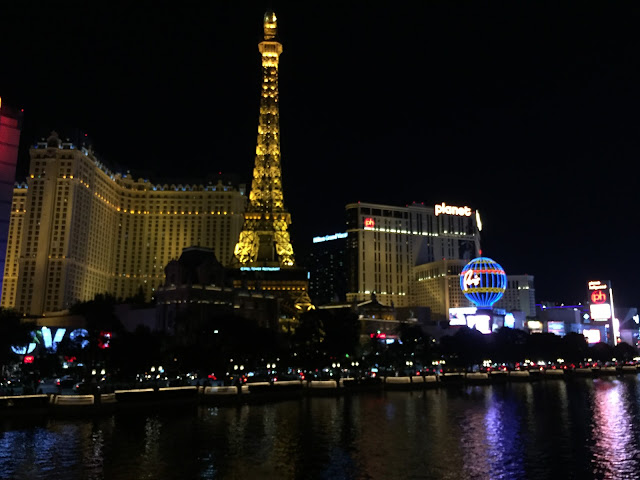 And in the middle of fake opulence and garish bright lights the inevitable: 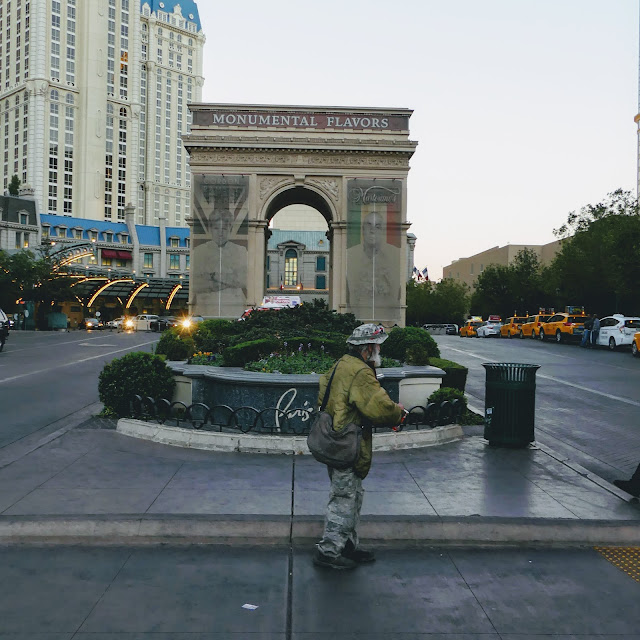 Duval Street should boast street performers and entertainers such as we saw. Sober polite and skilled: 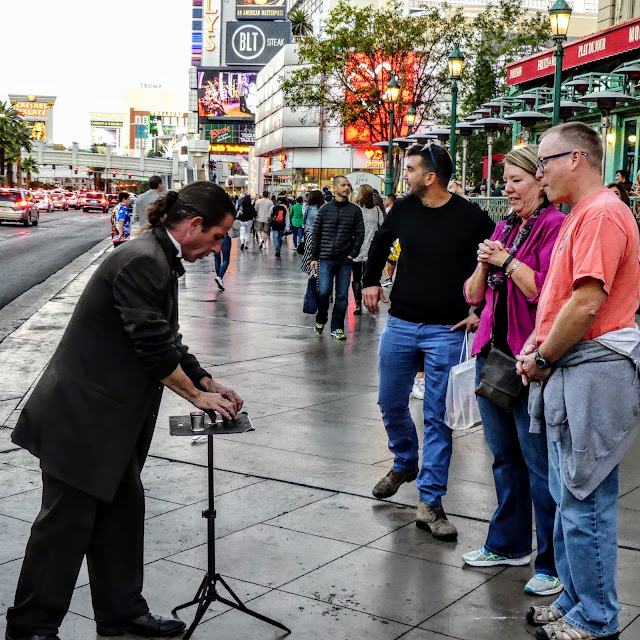 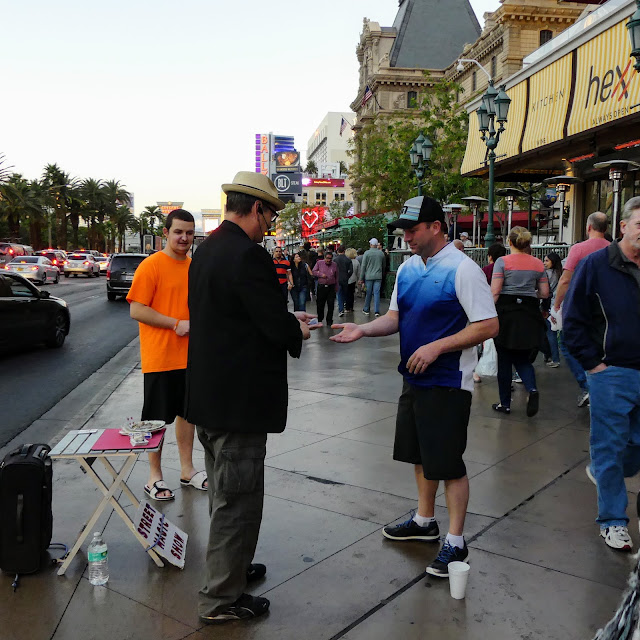 And cheerful bums minding their own business. We saw no drunks, the place smelled clean and crosswalks were replaced by pedestrian bridges at major intersections. The strip was manicured and landscaped and patrolled by bicycle police just like ours in Key West. 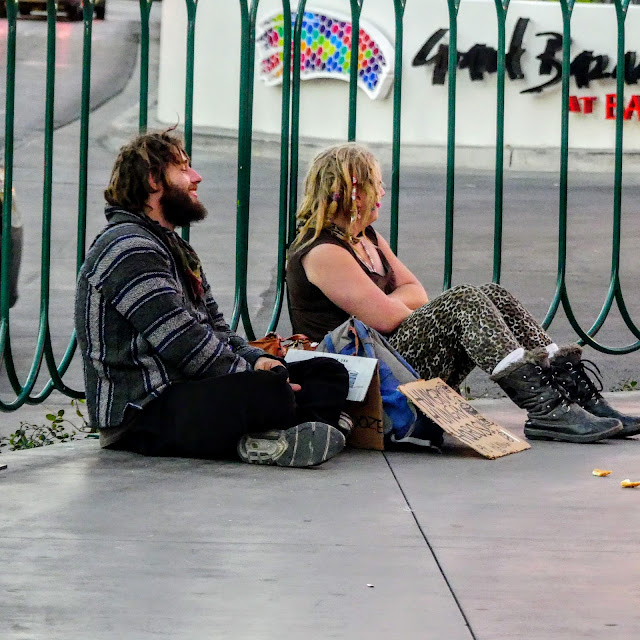 We walked among crowds who were boisterous and speaking a Babel of languages but no one was acting angry or belligerent. Show girls ready to be photographed with you: 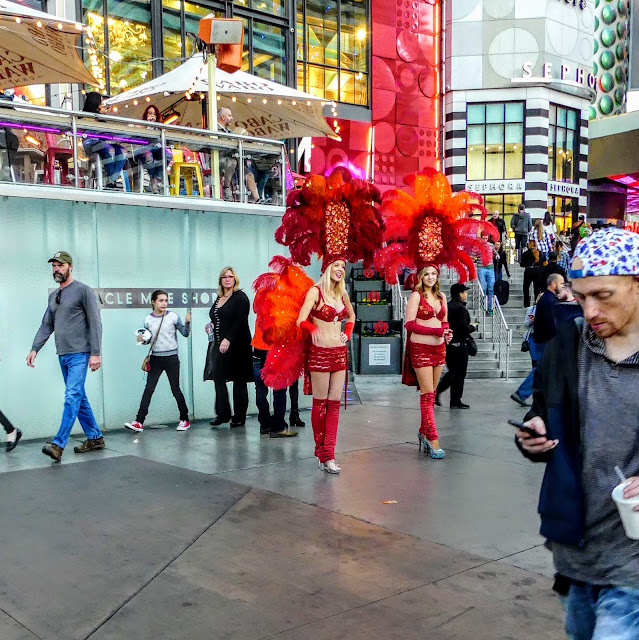 I suppose we lucked out and one could have a completely different experience but we could have spent a lot more time on the Strip people watching and window gazing. I did miss public benches just like I do at home but they do like to keep people moving in these spaces. 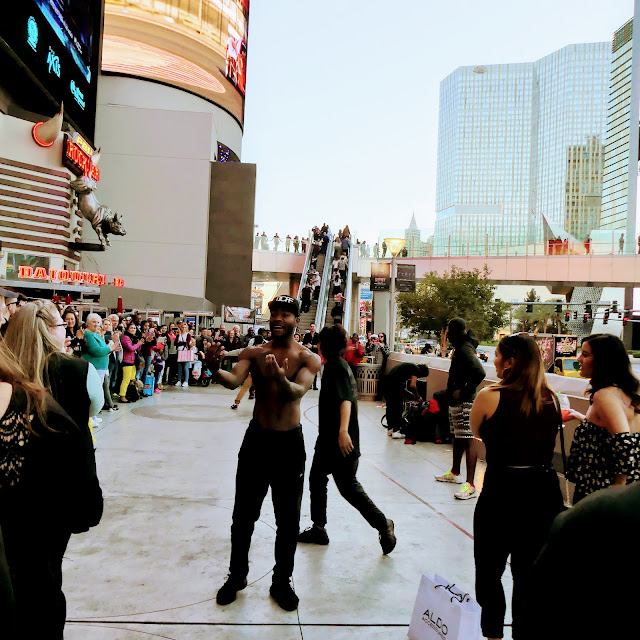 You pay a tip and these blonde bombshells will cuff you for the privilege of a selfie with them. There are tons of your favorite (or unknown to you) cartoon characters wandering around ready to be photographed with you. This to me was the part of Vegas that harks back to the more innocent era when women in underwear reeked of quickie divorces and suburban lust. It's not really what this town is about now, they make more money acting respectable. 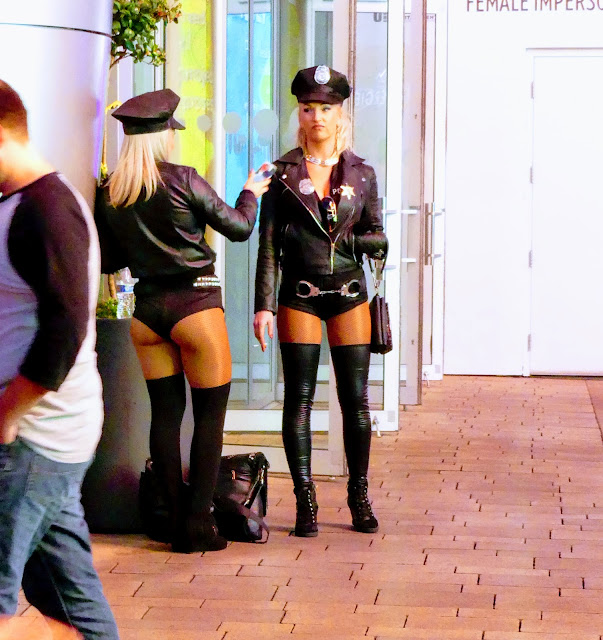 Who could resist a gondola ride while being serenaded by a chorus of O Sole Mio? Me, that's who. Especially on a 45 degree night in November but they had takers. 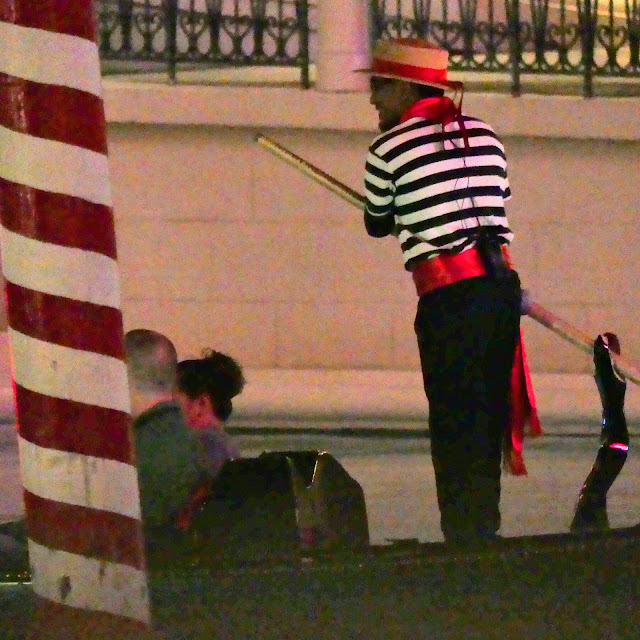 The whole place was like a walk in the park and I thoroughly enjoyed it. 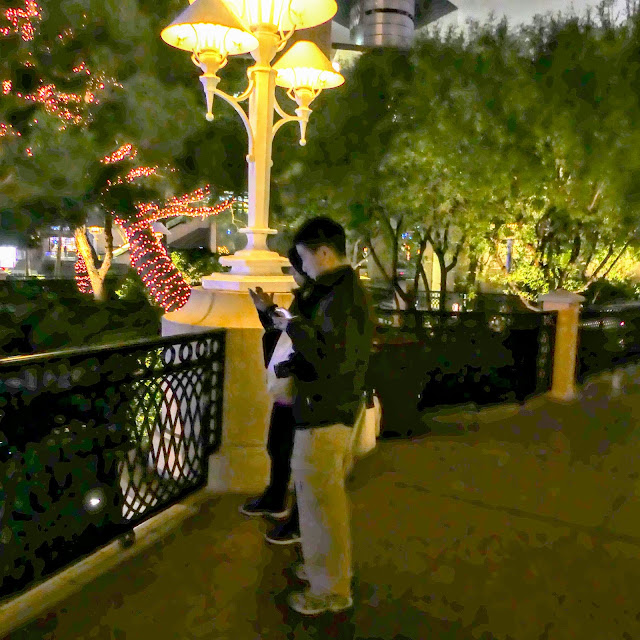 Extravagance with a precious commodity in the desert: 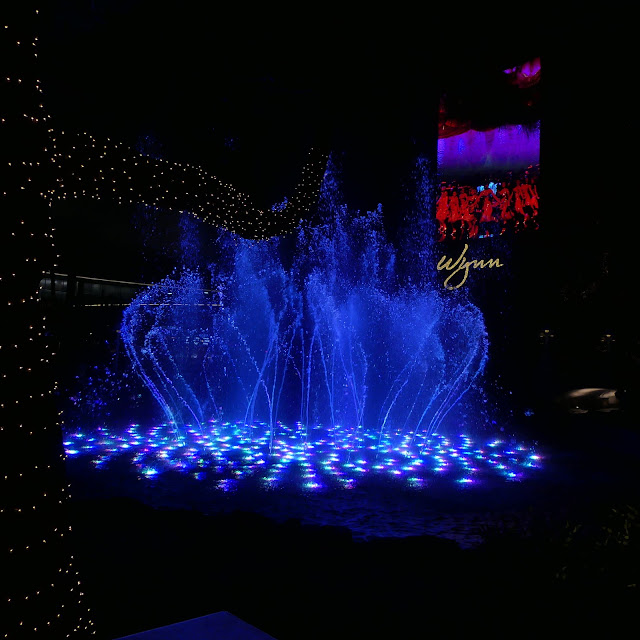 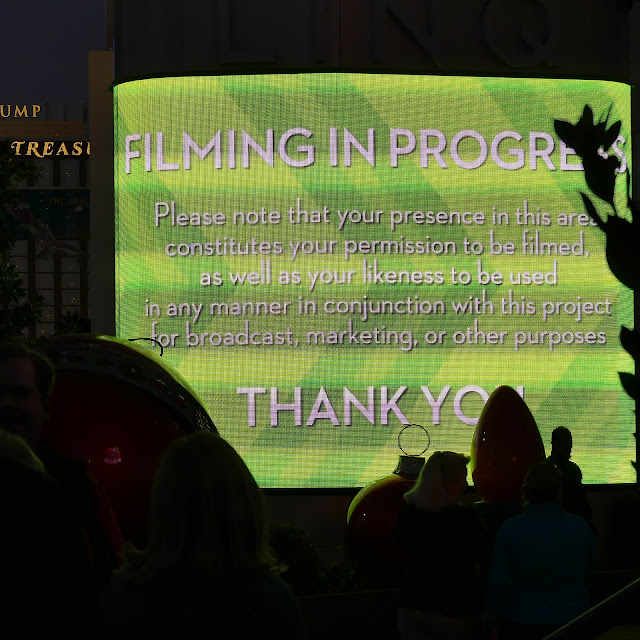 We walked past tons of dens of iniquity, boring places filled with blank faces and the smell of burnt tobacco, photographed rather poorly on the fly, the workers keeping things spotless of course: 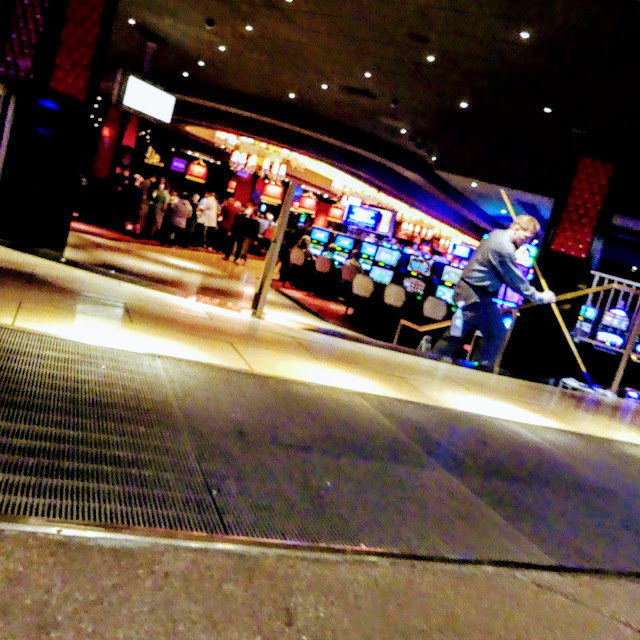 Everywhere I looked there were wonders to be seen. We left ourselves no time for  museum visits and there are plenty... 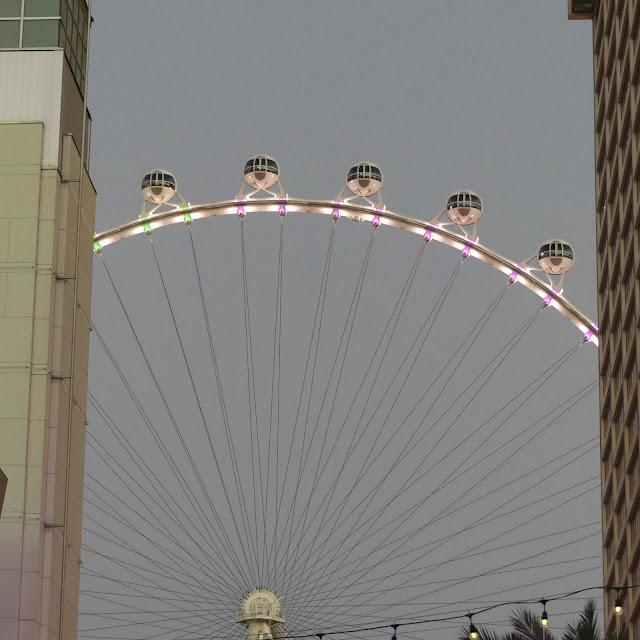 Beside the themed resorts with their bizarre cultural roots, Egyptians, Romans, Italians, French and so forth there are tons of brightly illuminated tower blocks everywhere. No shortage of energy wastage here: 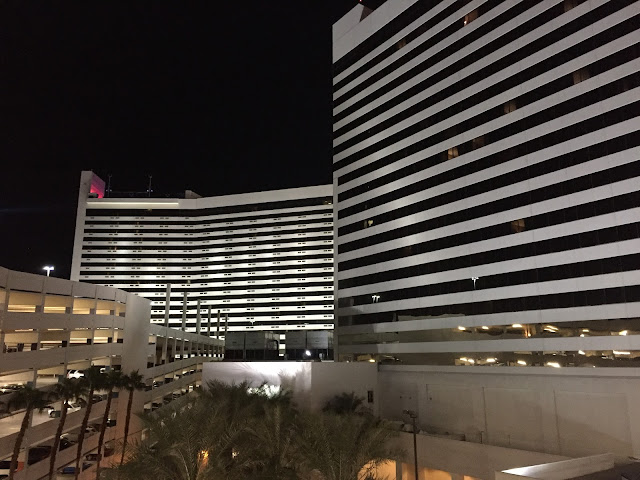 Lyft was a new experience for me and gave me a chance to engage with half a dozen locals talking about their lives, transplants mostly from California in search of affordable housing and reliable jobs and one guy from the Bronx who evaded a life in a gang by coming here at random, getting married and making a career with MGM. Las Vegas he said saved his life. MGM paid for his schooling and gave him a management position and because he is ambitious for his family he drives on the side. My respect for Las Vegas went up after that enlightening conversation. 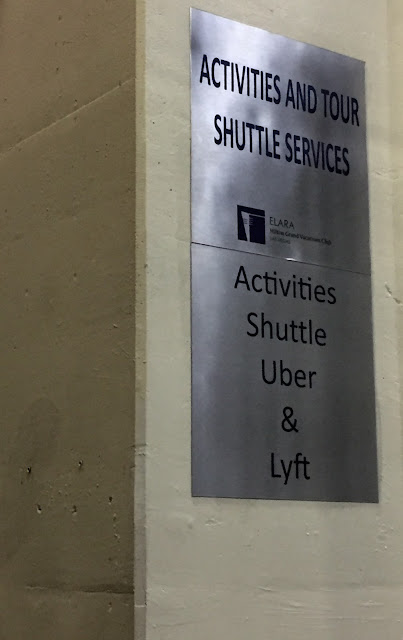 Oh and don't forget the silliness and the extravagance. Waste and excess could drive you nuts or you laugh it off. Your choice. 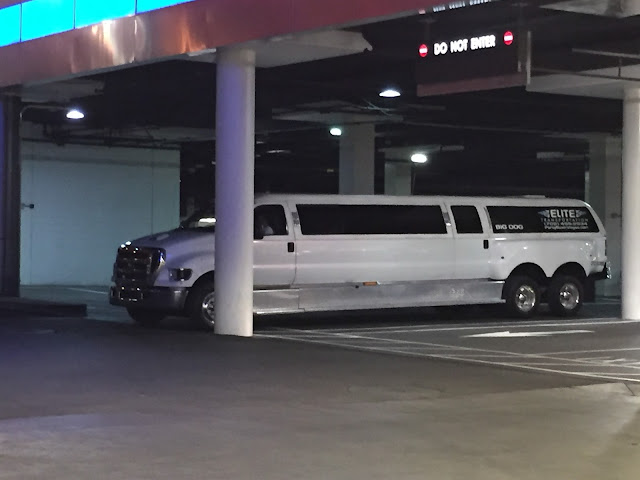 I think I will be back. Perhaps I will find the nasty unpleasant underbelly we should all hate on another visit. Somehow I doubt it, Las Vegas thrives on being a rather nice place to visit even if you don't gamble or want a  divorce. Who knew?
Posted by Conchscooter at 12:00 AM 6 comments: