A Cold And Not Quite Frosty Morn

Were you to suppose that sleeping in a van is almost like sleeping in a house you would be quite wrong, but after none months ownership I have decided finally what it is like. It is exactly like finding your lost youth and sleeping in a  van is a private and personal sleepover with your pre-pubescent self. This moment of self awareness came to me last Saturday morning at about 5:45 when I opened the back doors of the van and stepped onto the cold wet grass in bare feet wearing only a pair of shorts. It was 45 degrees, and not precisely balmy. I took this photograph about an hour later when there was some light. 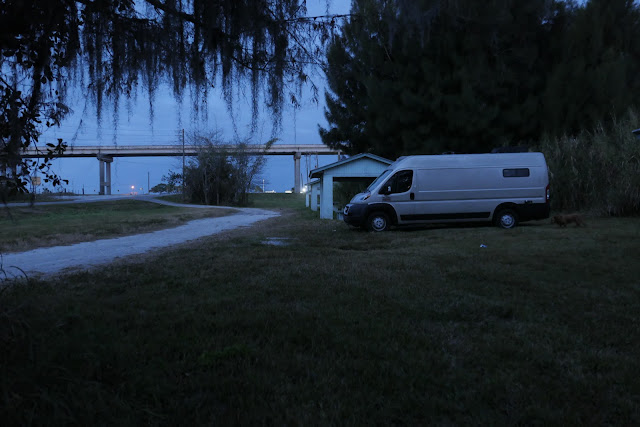 The day promised at least a little sunshine as I watched a few cars passing on Highway 76 from Stuart. We were about 25 miles south of the town of Okeechobee on the shores of the lake. I am required by marital law to sleep in the bed on the side closest the rear doors and furthest from the body of the van wherein is located the toilet compartment. This meant that on waking up unreasonably early the only way I could reach my clothes, including shoes and socks was to slip out of the back and walk outside round to the front. That or wake up the sleeping wife. The choice was obvious even through chattering teeth. 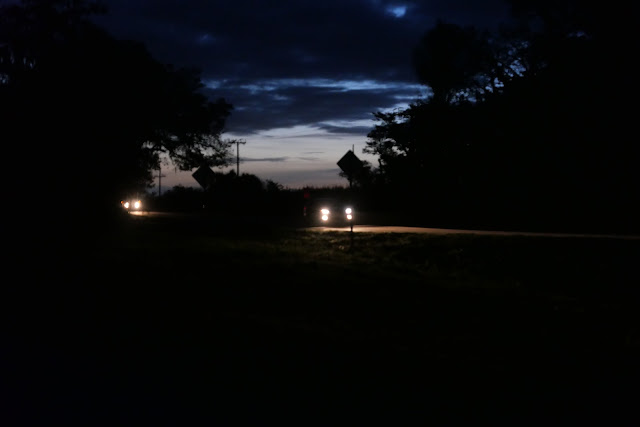 With camera in hand and eager dog wide awake we set off to explore the mowed grasslands around Port Mayaca lock. The night had passed in the sort of deep empty silence you find in wildernesses and yet here we were at a modest roadside rest area. I felt restored by sleep but filled with the anticipation of another day of not having a  clue what comes next. it's the sort of feeling you have to bury under a ton of routine and social obligations and endless parades of paperwork when you are trying to be a responsible adult. Out here all I had to do was stop Rusty getting squashed by hurtling sugar cane trucks and look for photographs. My wet feet were no longer frozen blocks of ice even though my socks, doubling as towels, were a little damp. I was not a creaky 63 year old behaving irresponsibly, I was Lewis and Clark all rolled into one exploring limitless frontiers. A van can do crazy things to you. 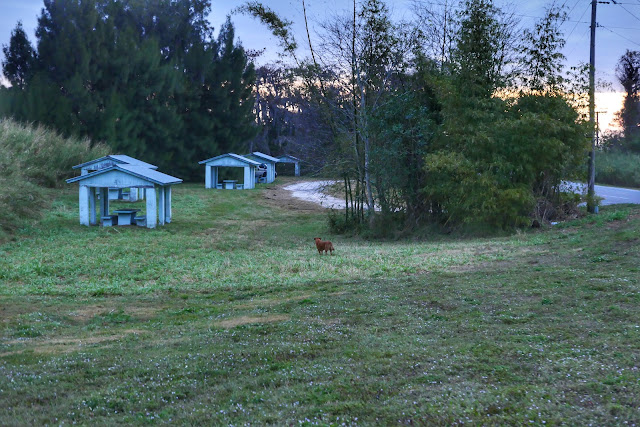 There must be a very hard worked employee of the Corps of Engineers or Martin County with a ride on mower who takes really good care of the grassy edges of life around here. The whole place is mowed smooth and with trash cans and impromptu parking areas must make a great fishing hole for those so inclined. 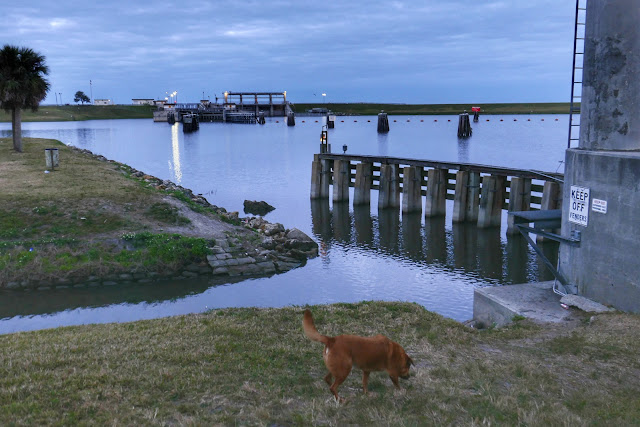 I saw a big fat trawler anchored on the St Lucie Canal, a  Krogen 42, very sturdy and capable of crossing oceans though rarely employed in such arduous duties when owners are more at home deep inland. I have come to enjoy the ability to explore that the van offers me quite aside from the pleasure I get from being reduced to teenage appreciation of the world around me. It was gone an hour later when we drove off and in the time it would take the $400,000 trawler to reach Stuart my $90,000 van could be close to the Georgia stateline and in Atlanta for dinner, had I wanted. I have no regrets about choosing a land bound retirement plan. 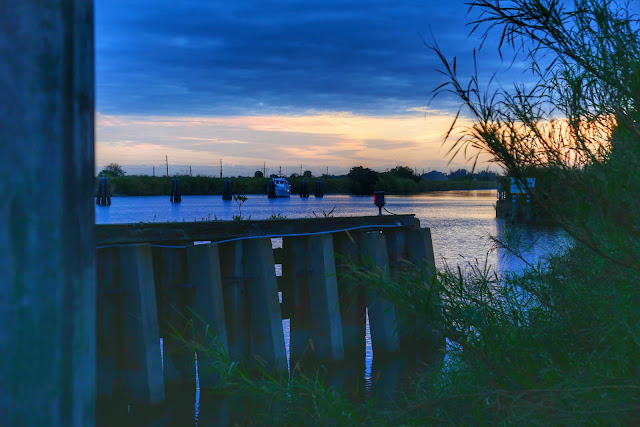 Rusty had a grand time as wandered a massive park-like  open space, a cool morning breeze in the air and no one anywhere in sight. Roadside stops like this one have become abandoned relics when every road become a superhighway and the parking lot still visible gets gradually overgrown. I should note that traveling with a  dog on a boat is hellishly complicated and I really do appreciate the ease of sliding open the side door and simply letting him out. At stops he sits outside and watches the world go by. Easy peasy. 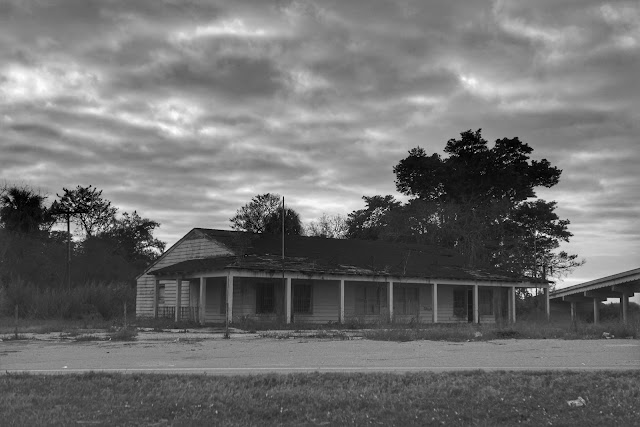 Our explorations complete we returned to the van where hot tea (for Rusty) and a delicious chicken strip (for Me) awaited us along with plans to seek out Layne's favorite sandwich shop in Orlando (Seven Bites) for lunch. Curbside pick up with pre-payment makes for one easy way to explore at least something in the time of pandemic when you are unwilling to sit down in a restaurant. It was a good start to the day that walk with Rusty with the promise of more to come. 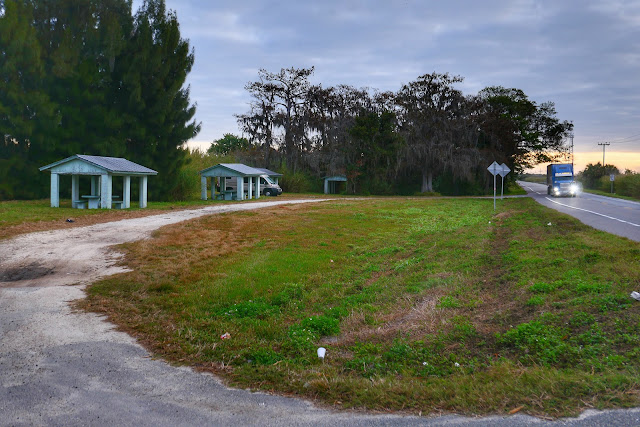 The thing about traveling in a van is that unlike a boat you can get right to the heart of places and I like that ease of exploration. Paradoxically what I liked most about traveling by boat was the innate separation of being at anchor away from the land. I like having my own island, a place of quiet, the pleasure of being surrounded by your own stuff, the feeling that all you need is in your home. The van does some of that but it is more practical in terms of running chores and  so forth. We did a great deal of walking when boating which was no bad thing I suppose. 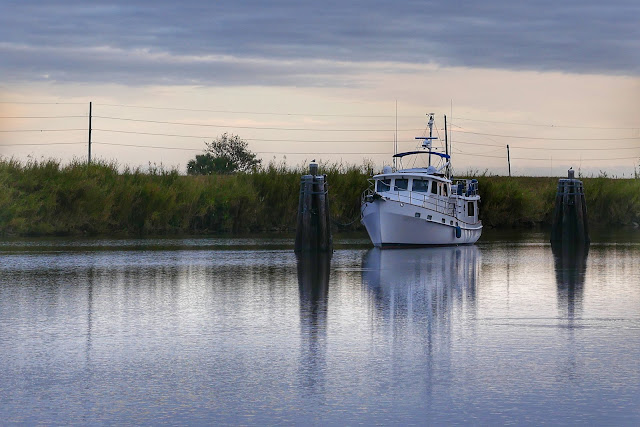 Either way you get to break out of the routine, to see new things, to live on the edge of other people's cultures and I like it very much. Not everyone does it voluntarily and later in the trip we parked next to a woman and her twelve year old son living in their SUV at  a freeway rest stop. She insisted she was fine and moving into housing in a  couple of weeks but Layne emptied the larder for them and even offered a blanket which they said they didn't need. They tried to refuse some cash we included but my wife hid it among the food packages. Those are the people who suffer through the "van life" conundrum, the involuntary dwellers of vehicles, unplanned, no money, on the forgotten margins. I expect we will see more of them as we go. I particularly dread crossing paths with stray dogs because I have this weird sensitivity to dogs and I dislike their helplessness in a human world. 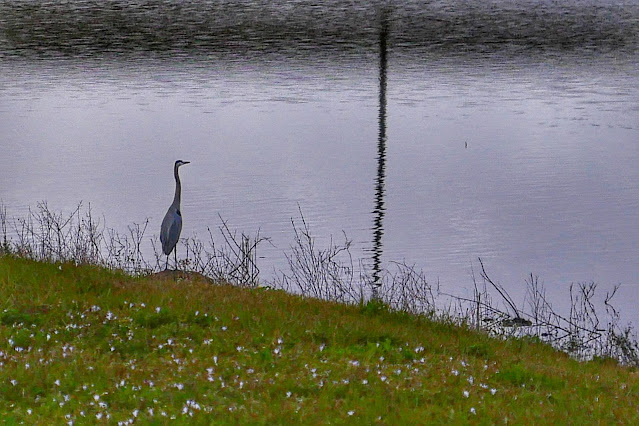 I listen to the fears of road travelers always worrying about safety as though it were some quality purchased outside their daily lives.  Security has become a commodity you buy on your way to the grocery store, because listening to your inner voice is a skill lost in the fog of civilization. Years ago on our travels my wife and I awarded each other a veto. Anytime one of us gets a bad feeling, a sense of awkwardness about a plan or a place all that has to be said is "veto" and we move on. We neither felt any compunction about stopping at the rest area and our intuition was rewarded with a good night's sleep. Fear is pervasive and I wish  curiosity and joy could take it's place to improve  lives.. 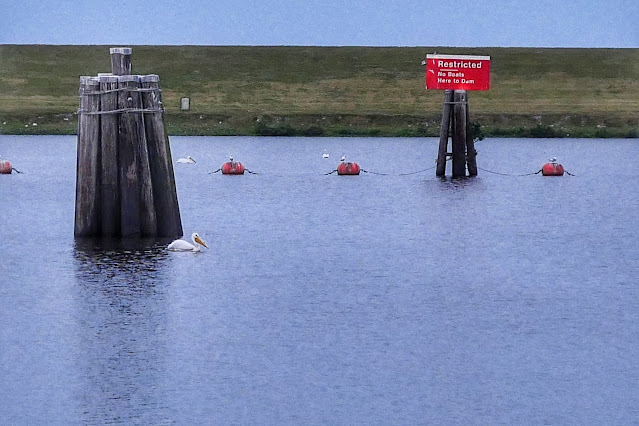 One aspect of roadside travel that is wearying me is the constant tide of trash everywhere. It may be that I am paying more attention to it but it seems to me it's getting worse. We both talked about what we had seen this trip and the plan now is to carry gloves and pick up tools and strong garbage bags to try to clean these roadside stops.  A duck swam up to me as I stood on a seawall and looked up making me feel guilty I had nothing to offer. How do wild ducks become beggars in this messed up world? On the one hand the anglers dump their bait boxes and toilet paper around the parking lot and on the other they feed the wildlife? 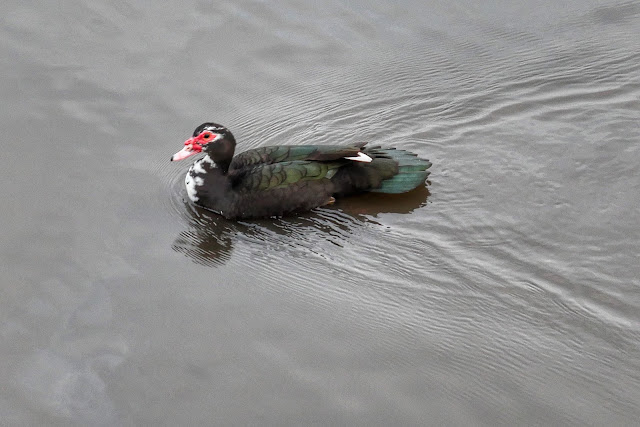 Back in the van, back on the road. Rusty has learned to travel in the big booming box and no longer fears road noises as we roll. He won't sleep in the bed in the back by himself underway but sits up front with my wife and looks out of the side window. At each stop he is always impatient to get out and see the new place where we have arrived. He seems to have the enthusiasm and curiosity required of any member of a well organized voyage of exploration. 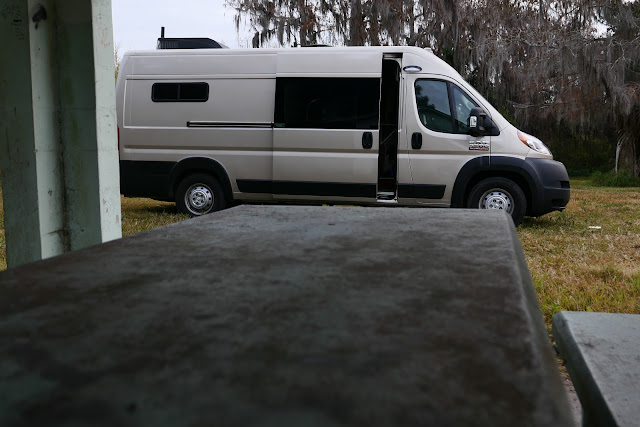 Back up over the bridge, one more useful stopping place logged. More unknowns ahead. 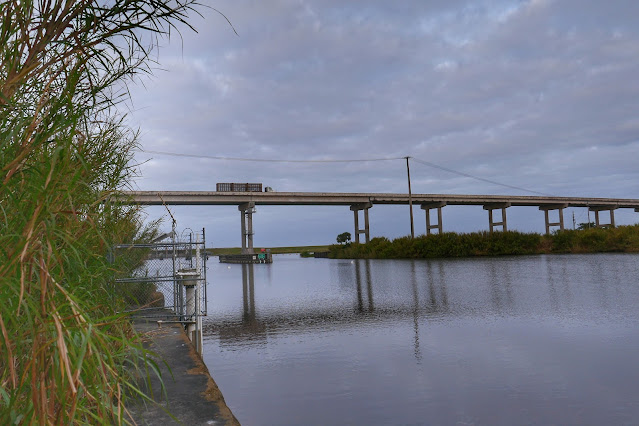