From December 7th, 2007 This consideration of a book still on my book shelf at home and never quite forgotten. Guns Germs and Steel got a completely dfferent reception a year earlier.

Bob agreed to wander through the bookstore with me, which came as a surprise. Bob had been retired for a while and he prided himself on being a doer not a reader. We had met while sailing the coast of Mexico en route, in our respective sailboats, to the Caribbean. Bob was a good friend and he and his wife Barb were excellent company, inveterate card players and excellent hosts. A retired electronics engineer he loved to fix things, and found my love of reading amusing but impractical. He told me he read perhaps one book a year. In this California bookstore Bob prodded me towards the shelves and started telling me I should read this and that. I nodded dumbly, astonished by his fervor. "This," he said. "You have to read this, it will blow your mind." 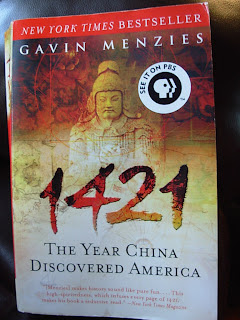 Well, I have to admit I was a bit dubious. He had previously recommended to me a book and in my opinion he got the thesis all wrong on that one. It was a good book, though, titled "Guns, Germs, and Steel," which posited that Indo-Europeans had received environmental advantages that helped put them ahead of rival cultures. Bob wasn't at all sure that other ethnicities could have profited from the advantages that Europeans used to get ahead. Europeans were the greatest, he said at the time. Not any more, nowadays Bob was reading voraciously and his world view was expanding, and he wanted mine to do the same.


The author of 1421, a retired Royal Navy Captain, spent 17 years researching a detective story about who actually traveled round the world first. The author's conclusions, beautifully detailed though perhaps according to his numerous critics  not so meticulously researched, would be absolutely devastating. He claims China sent fleets to all corners of the world where many of them crashed and sank and left behind colonies of Chinese sailors and concubines who created outposts of Chinese culture, genes and agriculture everywhere including Australia, South and Central America, Africa and of course to us most astonishingly, the United States. Hence he asserts the ubiquitous nature of the Asian appearance of native peoples the whole world over. Inuit and Incas, Fuegians and Aleut all have Chinese genes in them! 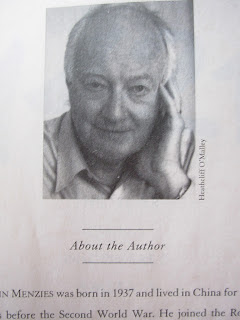 I loved his explanation of the famous Bimini Road, a strip of carefully placed underwater stones off the beach on North Bimini, obvious and simple in his world. Others have concluded the stones were placed by aliens or were part of the myth of Atlantis or some other rubbish. Menzies figures, with lots of research that the Bimini Road was a pair of slipways to haul the Chinese Admiral's junks damaged in a recent hurricane. 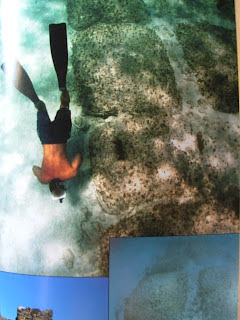 Not everyone approves of this re-write of history. Perhaps it is just a fictitious novel posing as history  but it is a fine yarn and I enjoyed it. Some other people did not apparently and they are quite miffed athe good naval Captain.


From Wikipedia this amalgamation of critiques:

Mainstream Sinologists and professional historians have universally rejected 1421 and the alternative history of Chinese exploration described in it as pseudohistory.[2][27][28][13] A particular point of objection is Menzies' use of maps to argue that the Chinese mapped both the Eastern and Western hemispheres as they circumnavigated the world in the 15th century.[29] The widely respected British historian of exploration Felipe Fernández-Armesto dismissed Menzies as "either a charlatan or a cretin". Sally Gaminara, the publisher for Transworld, the company which publishes Menzies's book, dismissed Fernández-Armesto as merely jealous, commenting, "Well, maybe he'd like to have the same commercial success himself." On 21 July 2004, the Public Broadcasting System (PBS) broadcast a two-hour-long documentary debunking all of Menzies's major claims, featuring professional Chinese historians.[13] In 2004, historian Robert Finlay severely criticized Menzies in the Journal of World History for his "reckless manner of dealing with evidence" that led him to propose hypotheses "without a shred of proof".[5] Finlay wrote:

Unfortunately, this reckless manner of dealing with evidence is typical of 1421, vitiating all its extraordinary claims: the voyages it describes never took place, Chinese information never reached Prince Henry and Columbus, and there is no evidence of the Ming fleets in newly discovered lands. The fundamental assumption of the book—that the Yongle Emperor dispatched the Ming fleets because he had a "grand plan", a vision of charting the world and creating a maritime empire spanning the oceans—is simply asserted by Menzies without a shred of proof ... The reasoning of 1421 is inexorably circular, its evidence spurious, its research derisory, its borrowings unacknowledged, its citations slipshod, and its assertions preposterous ... Examination of the book's central claims reveals they are uniformly without substance.[30]

Tan Ta Sen, president of the International Zheng He Society, has acknowledged the book's popular appeal as well as its scholarly failings, remarking, "The book is very interesting, but you still need more evidence. We don't regard it as an historical book, but as a narrative one. I want to see more proof. But at least Menzies has started something, and people could find more evidence."[31]
A group of scholars and navigators—Su Ming Yang of the United States, Jin Guo-Ping and Malhão Pereira of Portugal, Philip Rivers of Malaysia, Geoff Wade of Singapore—questioned Menzies' methods and findings in a joint message:[26]

His book 1421: The Year China Discovered the World, is a work of sheer fiction presented as revisionist history. Not a single document or artifact has been found to support his new claims on the supposed Ming naval expeditions beyond Africa...Menzies' numerous claims and the hundreds of pieces of "evidence" he has assembled have been thoroughly and entirely discredited by historians, maritime experts and oceanographers from China, the U.S., Europe and elsewhere.[26]

Menzies has created a website for his readers to send him any information they can find that might support his hypothesis.[13] Menzies holds that his website is "a focal point for ongoing research into pre-Columbian exploration of the world."[32] In response, his devoted fans have sent him thousands of pieces of purported evidence, which they claim serve as proof that Menzies's ideas are correct.[13] Menzies also says he uses information his fans send to improve his hypotheses.[32] Academics have emphatically rejected all of this "evidence" as worthless and have criticized what American history professor Ronald H. Fritze calls the "almost cult-like" manner in which Menzies continues to drum up support for his hypothesis.[13] In reaction to this criticism, Menzies has dismissed the experts' opinions as irrelevant, stating, "The public are on my side, and they are the people who count."[13]
The book was included in History News Network's list of the worst books ever written about American history.[


Like so many pieces of history if you give this one any credit at all you have to change a lot of other perspectives as well. It will never catch on and consider I read this book and wrote about it on this page in December 2007.  The idea that Chinese super cruisers sailed around the world long before anyone else has yet to gain serious consideration. Thanks to the human predilection for preservation of innate prejudice it never will. I remain intrigued. And is there anyone ready to explain Bimini Road with something other than Atlantis or Aliens?
Posted by Conchscooter at 12:00 AM 5 comments: