I was surprised to see small boats making progress through the harbor yesterday and when I realized how many of them I photographed I saved the pictures for a separate cold front essay. 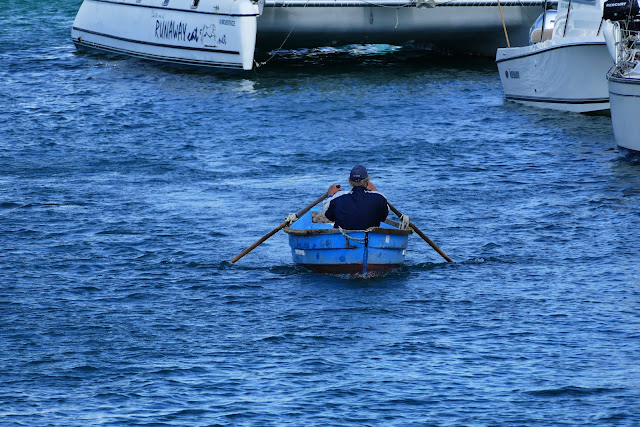 Technically the winds have not produced a proper gale as the winds reported to 35 miles an hour have been mere gusts and not sustained, however these are mathematical calculations and merely standing on land facing the wind you could say it feels like  gale. 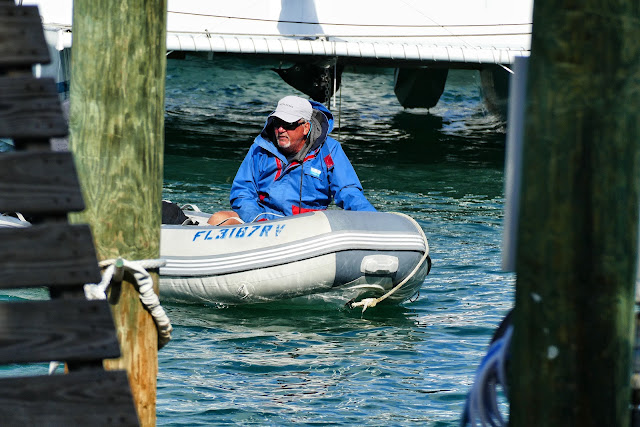 Sailors like all humans have a tendency to exaggerate, thus in a  sea story waves have the ability to get taller and deeper and winds increase in strength exponentially in the telling. What may not be proper reporting makes for much better storytelling.  Being securely tied up in a marina makes for a crappy story but much more comfortable living. 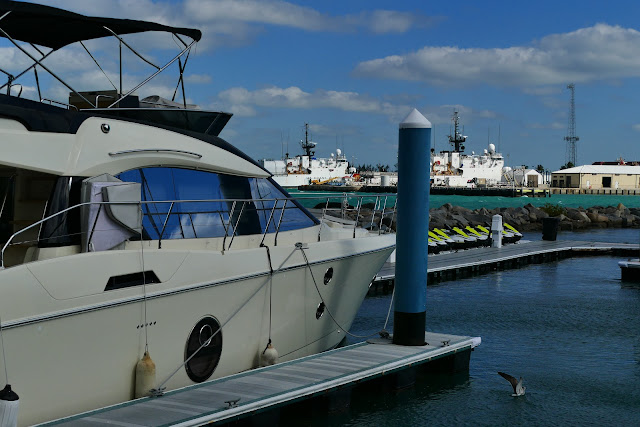 Note the tightly wrapped black plastic garbage bag in the bow. Unromantic but critical device for the average liveaboard who wants stuff to travel and remain dry. I cannot imagine this boater's return journey in a  small inflatable with an equally small outboard. It would be a long slow wet ride. 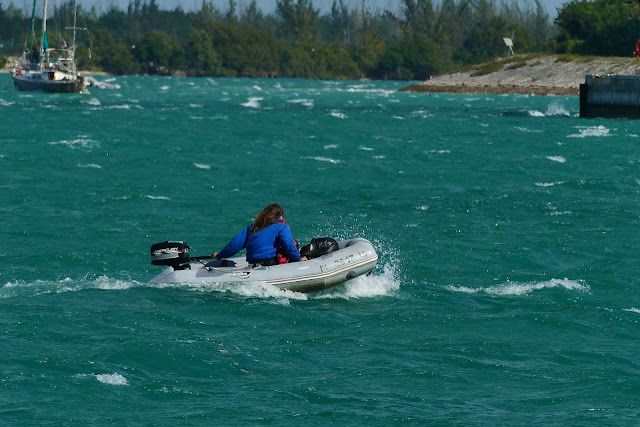 There are those who eschew outboards altogether as instruments of the devil, naming no names Webb Chiles, who takes pride in rowing his inflatable. Who can argue with the health benefits and general manliness of a pair of properly sized oars? I can. It's too much hassle for daily living at anchor. I am in the mainstream here. 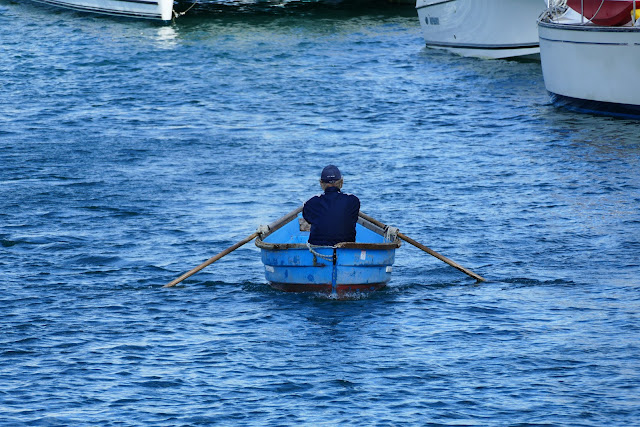 A nice hard dinghy with a big motor. Naturally that makes towing or storing the thing difficult for the average modest sailboater so a dinghy in this work boat style usually  indicates a sailor who sails less and anchors in one spot more. But he commutes mostly dry in the heaviest winds. 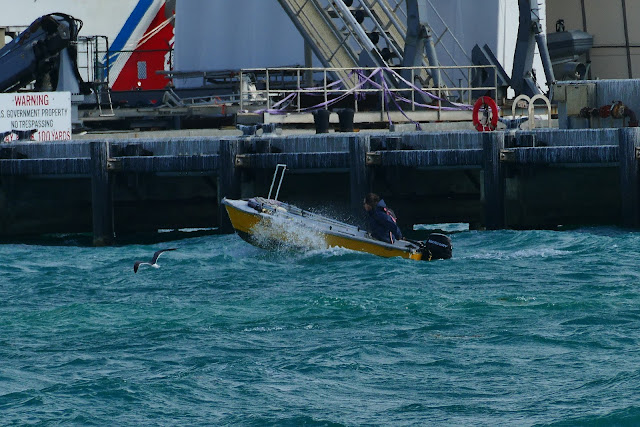 I was trying to capture wave action. always modest in these shallow waters, along the breakwater protecting the Bight and to my astonishment another small rubber doughnut dipped  and bobbed into my viewfinder. 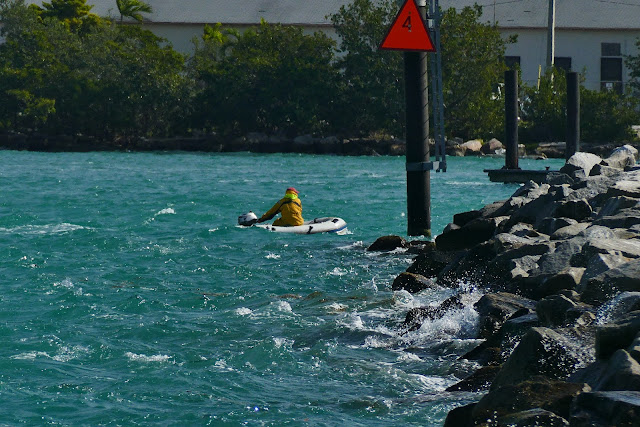 That was the best I could do to illustrate massive overwhelming seas submerging the north shore of Key West. I have to admit I didn't look really hard as my digits were numb and my brain was following suit. 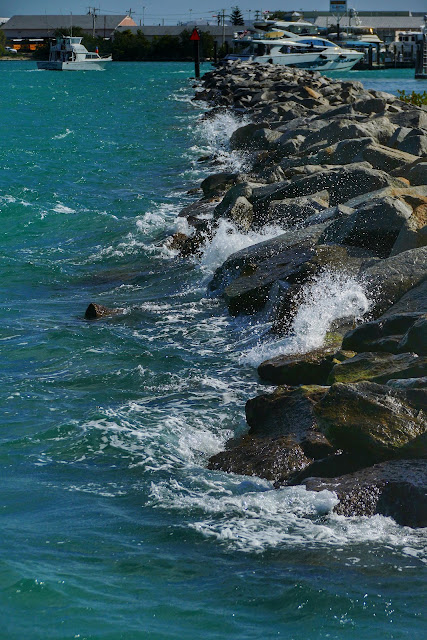 I had, as reported elsewhere, a slow intermittent exit from Key West around four post meridian as vehicles struggled to find alternatives to North Roosevelt. Traffic snarls don't bring out the best in people and I saw lots of pushy car drivers and distracted phone operators. I was at least inside with the heater on. Then I noticed a gaggle of cyclists at the light at South Roosevelt. It didn't look much fun but I thought perhaps it was better than bouncing around and taking a shower in a dinghy. 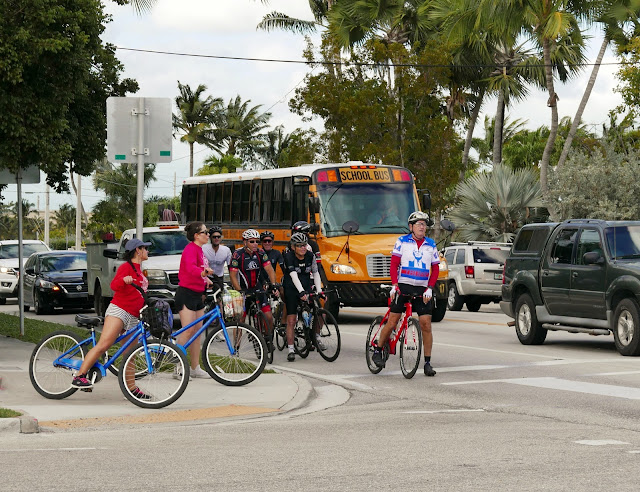 Whichever way you look at it travel yesterday in the Lower Keys had it's challenges.
Posted by Conchscooter at 12:00 AM 4 comments: