The plan was to take a few days off, no overtime and rest after a three week stretch of dispatching. The plan fell into disrepair almost as soon as we woke up Saturday morning. By the time I was driving the van over the Sunshine Skyway bridge into St Petersburg my mood was as gray as the sky... 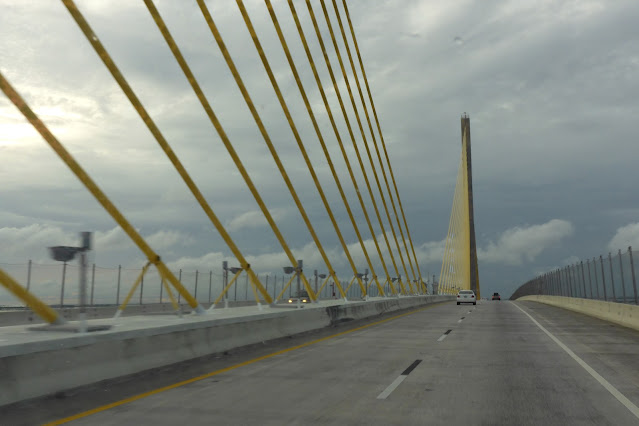 Friday might was decision time in my household. I got off work and was home by 6:30 pm and Tropical Storm Fred was lumbering around the north coast of Cuba producing modest 40mph winds and lots of rain. My wife and I decided it would be best to bundle ourselves on the road and get to the mainland before the storm as modest as it might be, swept the Keys. 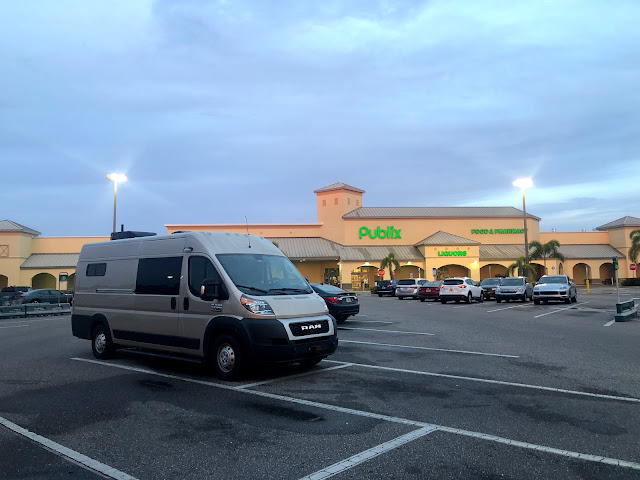 The next morning we tackled the storage locker problem and rented an upstairs unit near the Miami airport. The idea is when we fly back we can stop by the storage locker and pick up anything we might want to haul back to our van life elsewhere in the world. We rented an upstairs unit in an air conditioned building with the hope that our sentimental few possessions might be storm proof...If not we shall be even less burdened than we plan to be as we start our travels. 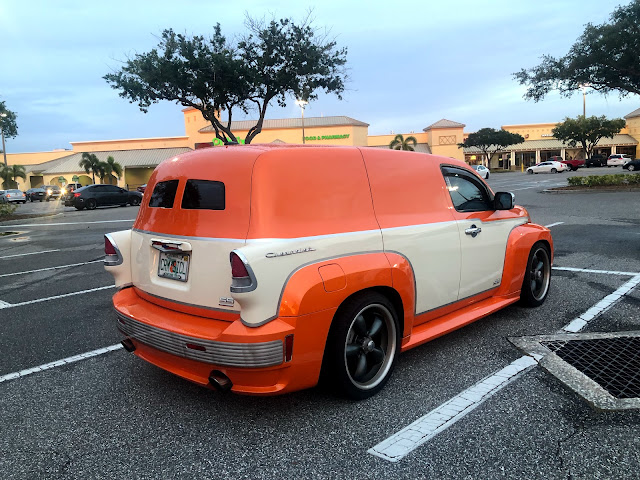 My wife was strangely lethargic and forced me to do the paperwork (horrors! Me in charge of paperwork?). After we had cleared the back of GANNET2 of our first pile of boxes I insisted we go home. It isn't like Layne to show anything less than a type double A personality. She overrode me and insisted in turn that we continue to St Petersburg and our friend's pool house on loan for the weekend. I got behind the wheel and drove Alligator Alley while wife and dog slept in the back. 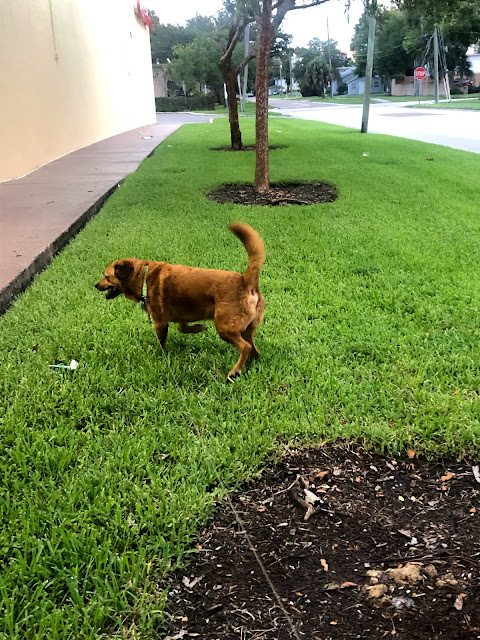 The owner of the house is away so we stopped to get supplies at Publix, and when I say "we" I mean I did. In another display if uncharacteristic disinterest herself pulled up extra blankets while I walked Rusty and then stopped in Publix all by myself to get dinner. I was very restrained and bought Useful Things like salad and soup but steered well clear of banana pudding and ice cream and alcohol. 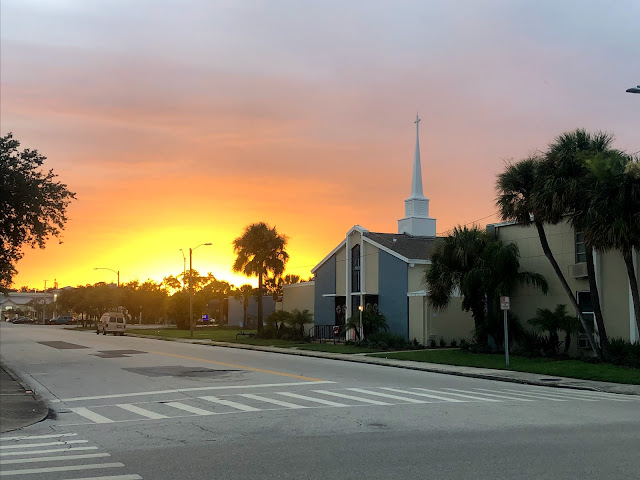 It was a rather odd evening watching my wife droop as a nasty rash appeared on her forehead straying onto her eyelid. I got a bit grumpy feeling certain we should have turned back after the storage locker drop off in Miami and now we were six or seven hours from home. After a disturbed night's sleep I was on Rusty duty as usual and we wandered the neighborhoiod known as The Coffeepot for an hour, Rusty with his nose and me with my camera while the invalid tried to sleep. 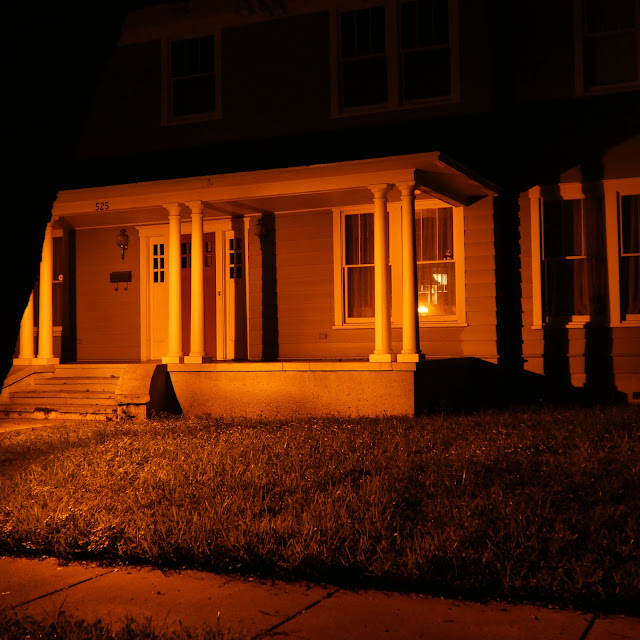 It's an interesting part of St Petersburg, near the water  and north of the central downtown, streets of upper class homes covered by large trees with varied architecture and neat gardens on all sides. 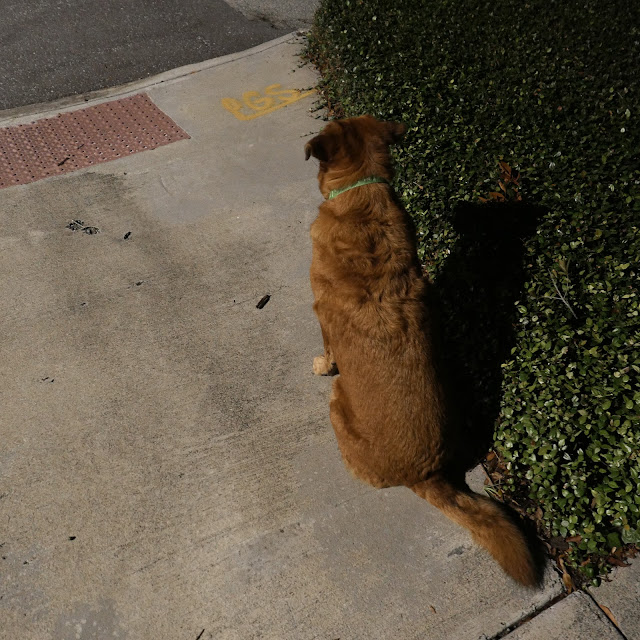 I followed Rusty as he wandered ahead and we were alone on the streets at five of a Sunday morning. It took my mind off my wife's rash, at least a  little bit. 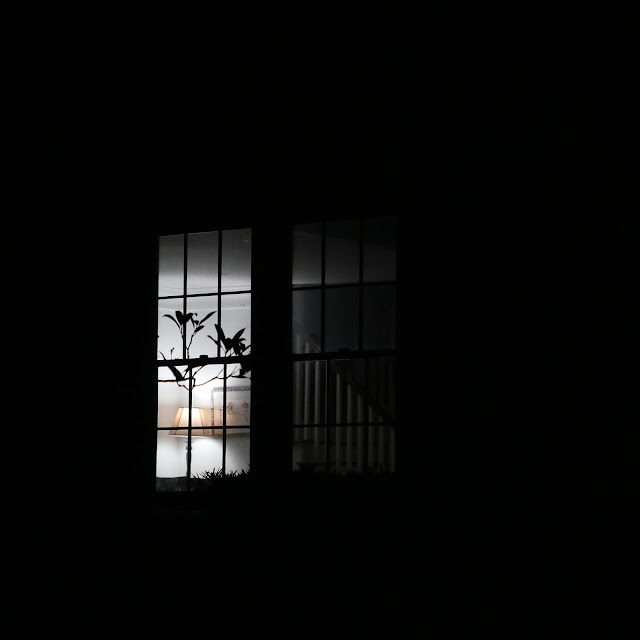 Faced with the prospect of living and traveling in the Promaster  camper van this medical problem was an interesting exercise in how we might cope when away from home.   Certainly it was hugely convenient to have a bed and toilet and kitchen right there for the patient and for myself when she was in medical facilities being checked out.  If necessary we could always rent an air BnB I suppose. In this case we found a clinic and waited two hours beofre Layne could be admitted. 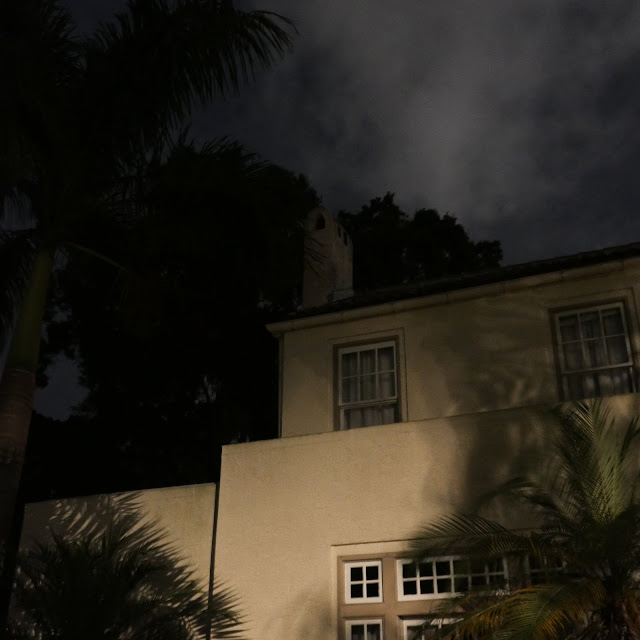 The primary care doctor was pretty freaked out and wanted her to see an ophthalmologist at St Petersburg General. So back in the van where Rusty and I had waited in the rain we called the hospital where a very apologetic nurse said the wait to be seen was at least eight and a half hours. Covid has swamped us she said. My wife looked a bit taken aback. We can get home before that she said, So I started back down the freeway toward Alligator Alley. 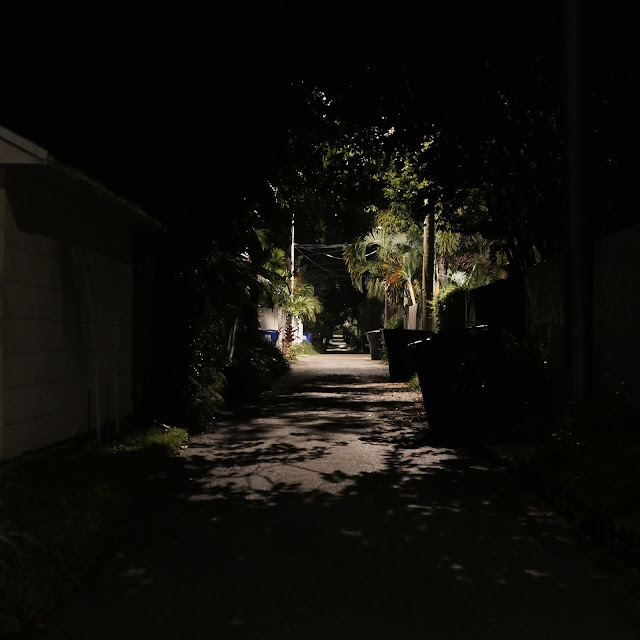 I had been to the Dali Museum that morning, pushed out of the pool house by my wife to see an exhibit of photographs by Lee Miller. 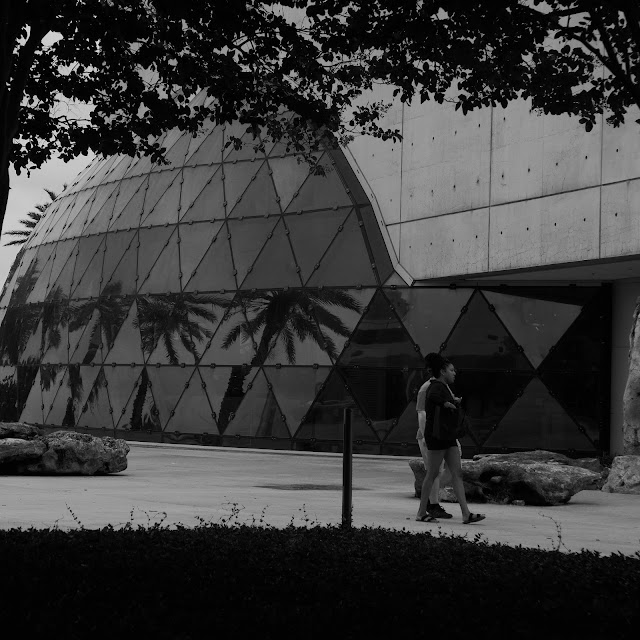 At the time I couldn't figure out why my feverish wife was so forceful but on the drive back toward Miami she confessed she had wanted to come to St Petersburg so I could get to see the exhibit I had been looking forward to for a while. 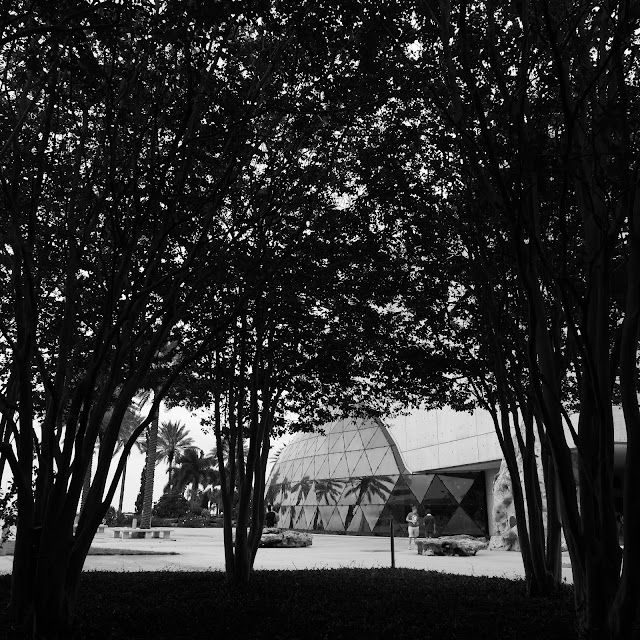 She knew if she didn't push I would never have agreed to take on this crazy drive with her showing every sign of a fever. 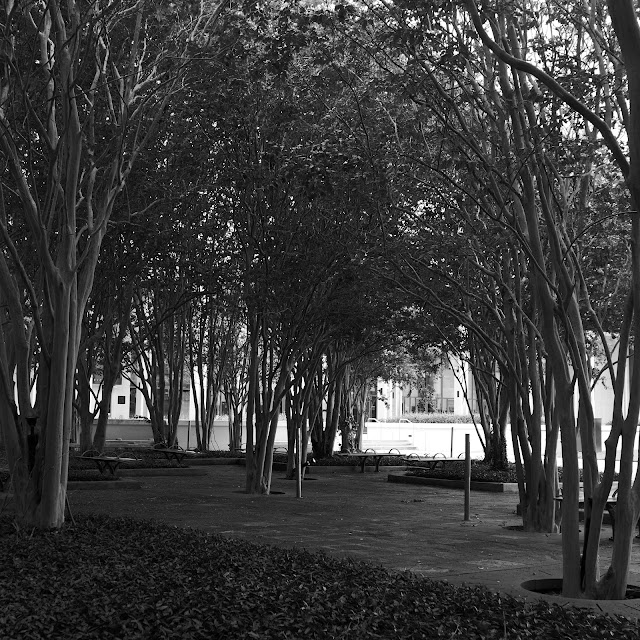 We had been concerned she might have been starting down a Covid path herself with her compromised immune system but the doctor diagnosed a nasty dose of shingles, so there was that sort of not terrible news. It was painful though. 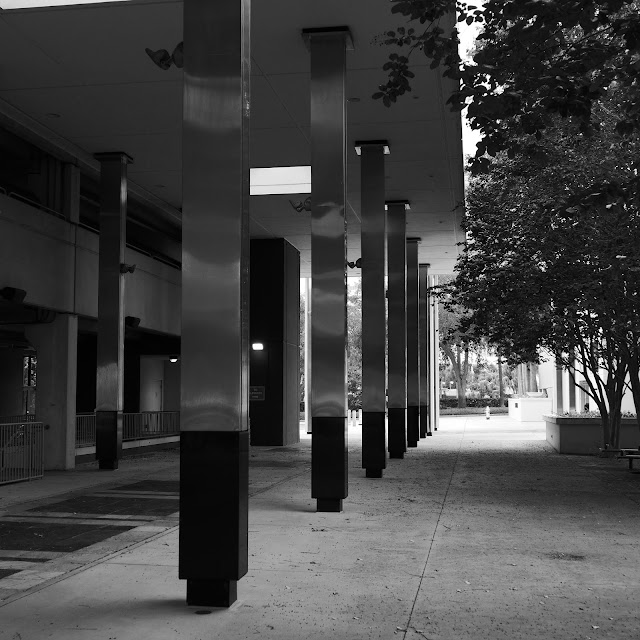 I took these pictures in a light drizzle outside the museum sitting under the trees and just catching my breath after the sensory overload inside the Dali. 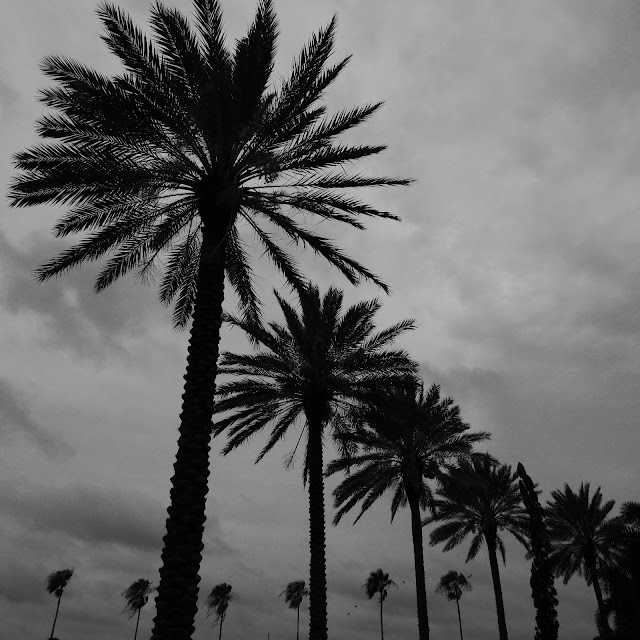 There I was, lurking in the shadows, wondering where my weekend had gone. 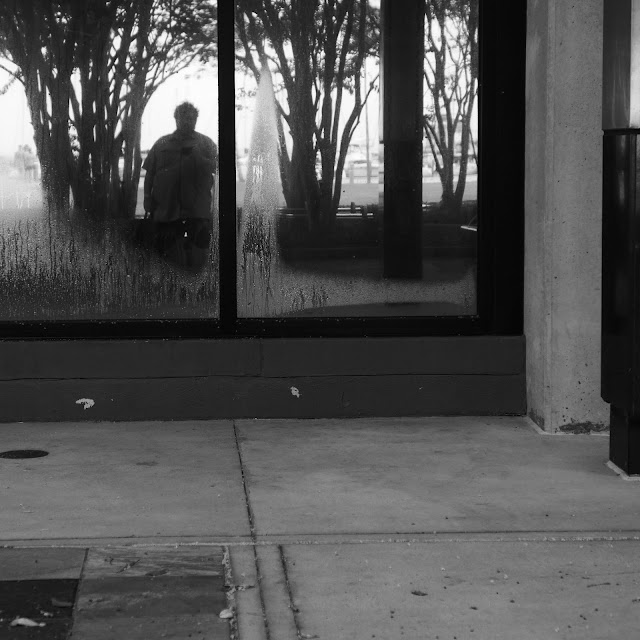 On the road to Miami my sick wife had a brilliant idea, and we pulled over to check it out. 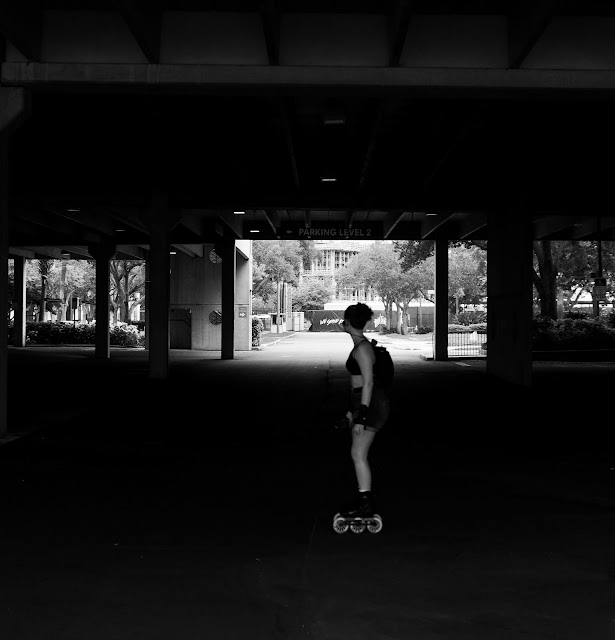 There is an eye hospital in Miami called the Bascom Palmer Institute attached to the University of Miami, the preeminent eye hospital in the country. I wonder she said fi they have an emergency clinic. 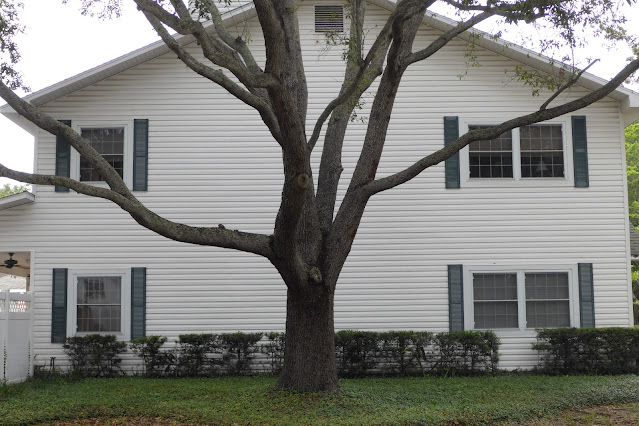 Sure enough they have 24 hour emergency services for people with eye problems so I recalibrated Google maps on my phone and got GANNET 2 back into gear. It was an inspired decision. We arrived at about 11:30 at night and I unloaded Layne so she could shuffle off to get help. Part of the joy of this Covid nightmare is the impossibility of gaining access to any medical facility unless you are the patient. This added little wrinkle engenders the sort of helplessness and distance that makes the whole process so much harder. There's no doubt the no visitor rule is critically important but it sure does add a burden. I took Rusty for a walk and then we settled down in the parking lot to sleep until the patient called back. Thank God we had the van and the air conditioning and the toilet all to ourselves. 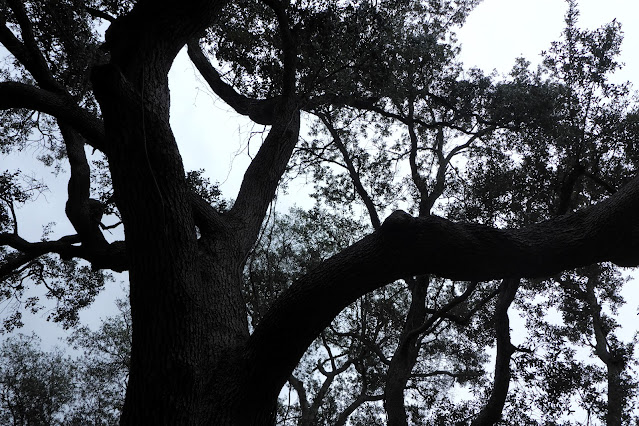 My walk took me past a hellish landscape of urban decay, homeless lunatics squatting on the sidewalks mumbling to themselves, blanket shrouded lumps snoring under the trees, piles of trash and discarded fast food containers all along the sidewalks. Miami at it's least finest. It was a relief to get home to the van and close the door on the outside world. 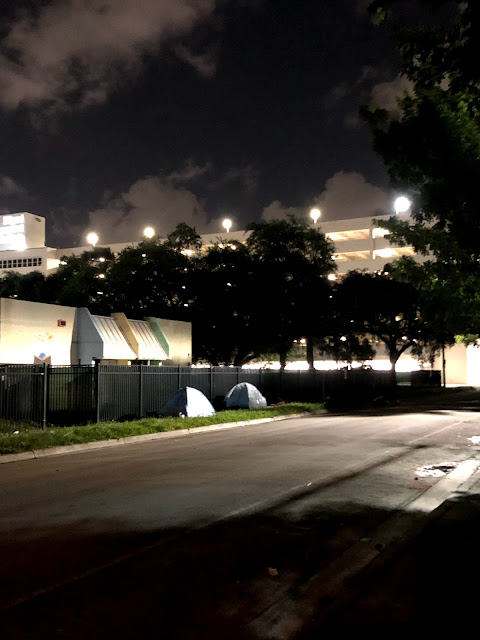 Layne woke me from a  deep sleep with a telephone call around 1:30 in the morning with the good news that her eye was not in danger but the facial pain would persist for a few more days. I got behind the wheel, she and Rusty went to bed and we zipped down an empty Overseas Highway to arrive home at 3:30 in the morning. Rusty got his neighborhood walk to check the latest smells, and that was the end of a very weird weekend away. The van's contribution was outstanding; the rest of it sucked. Van life, from the files: 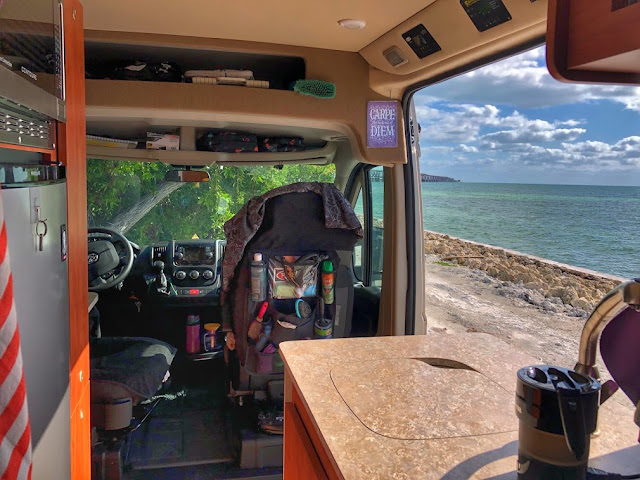 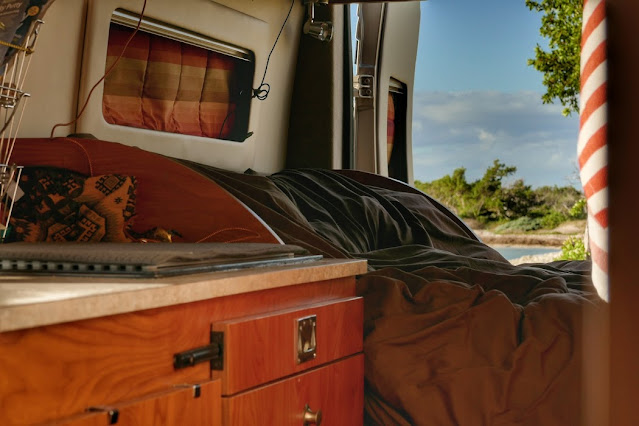 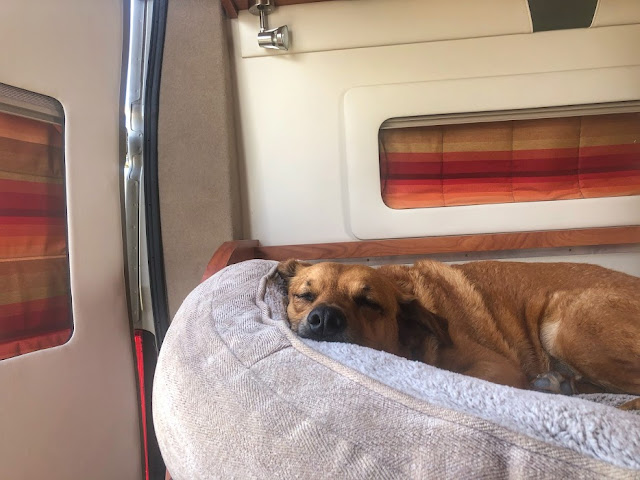 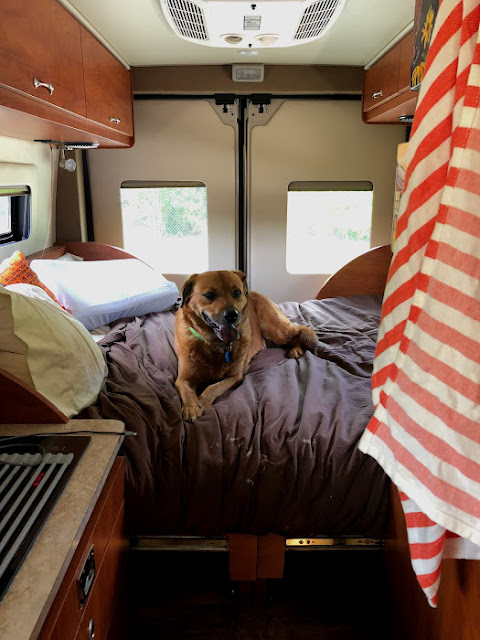