I had lunch with Robert, we parted ways and Rusty got up from sitting quietly under our feet (it was outdoors). Rather than gallop home I decided to reward Rusty with a walk. One day I will run out of new places and he will be disappointed. Today  was not that day. 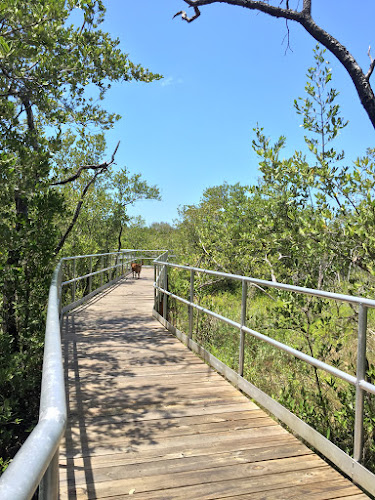 The walkway in Little Hamaca City Park has been modernized with aluminum to replace the old wooden handrails, which were here when I came with Cheyenne: 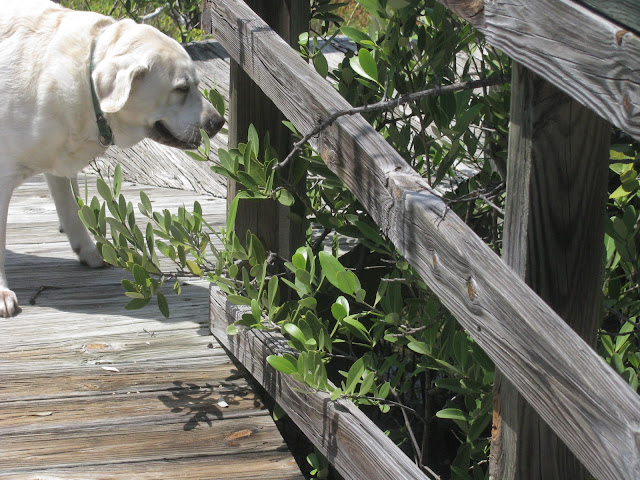 Rusty trotted on ahead and he is devilishly  difficult to photograph as he moves so quickly: 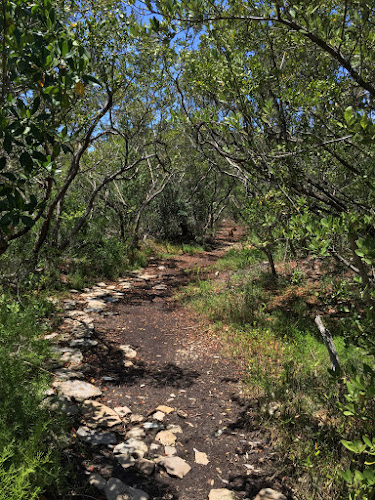 Unlike his predecessor, the late lamented yellow Labrador Cheyenne who was fast enough: 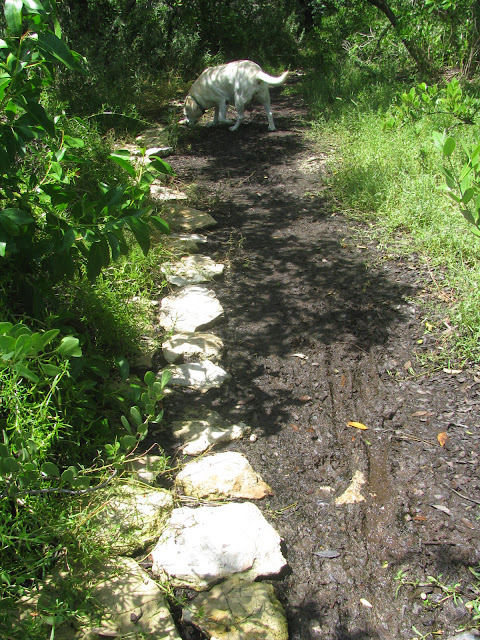 The old information signs are still here, decomposing into illegibility: 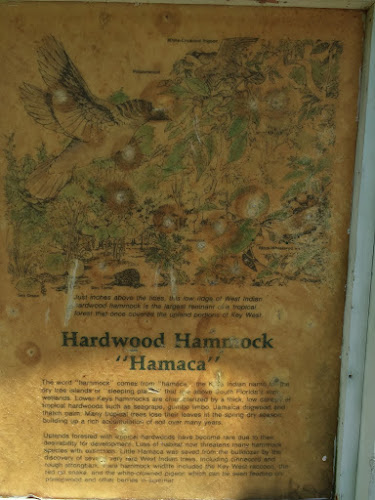 The essence of the story, oft repeated here is that the Spaniards understood the Indians to be describing their beds "hammocks" when the Indians meant the mounds-of-high-ground-that-are-dry, when asked about their sleeping places. Hence the confusion and the name given to outcrops of dry land in the middle of the Everglades ( and Key West it turns out): hammocks where hardwoods thrive in the midst of water. 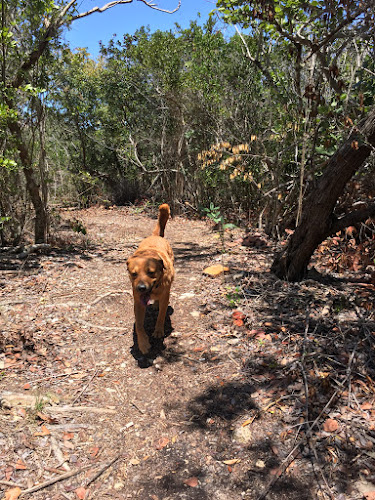 The walkway crosses the path above the dirt and the salt water and eventually arrives at the Riviera Canal. 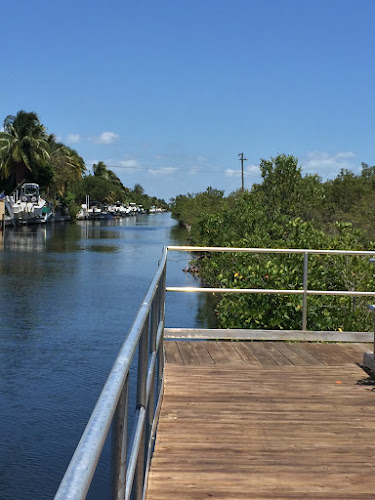 There used to be space to tie up a boat here for water access to the park. Nowadays the aluminum rail is solid and uninterrupted. Not many boats ever used the dock and I expect fear of falling into the water motivated the change: 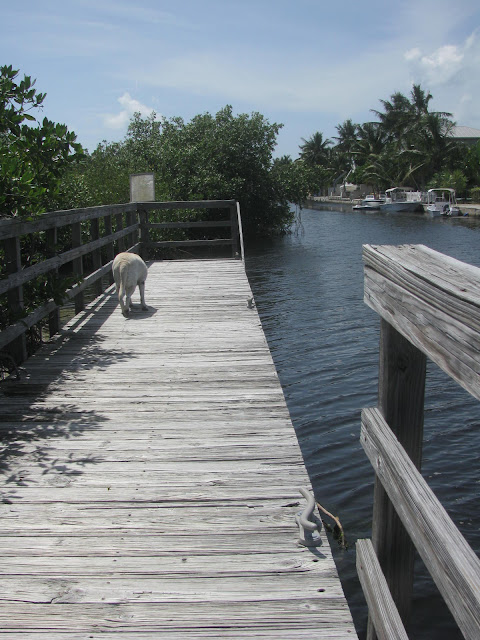 And so back whence  we came: 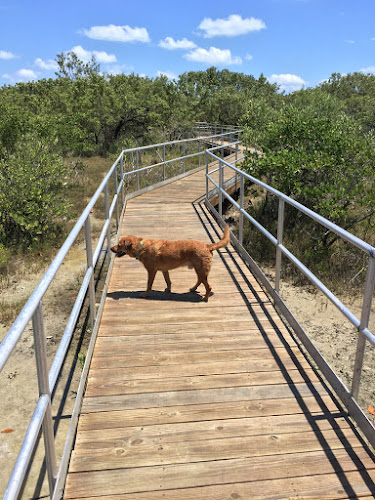 The gambusia trenches are still here of course. They used to keep mosquito larvae eating fish in these trenches to help with the insect problem in the Lower Keys. I suppose the silting up problem is more trouble than they are worth: 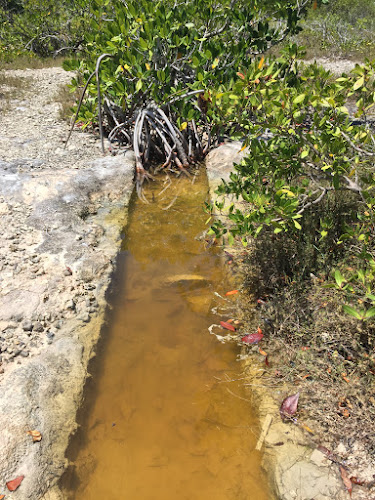 This is where the story gets a bit sticky. I sort of wandered off the trail following Rusty and playing with my camera, and before I knew it I wasn't at the edge of the trail but I stepped off far enough to be properly lost. 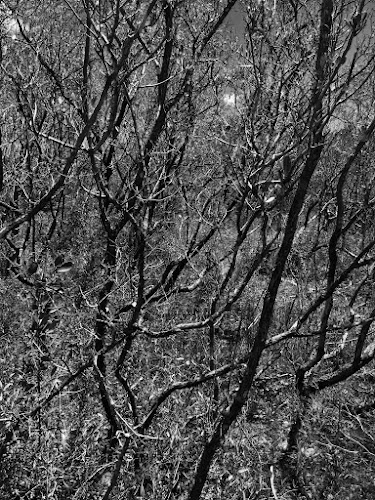 Rusty thought it great fun, but I was wearing socks and sneakers and my feet got wet, the branches snagged me and it was an awful sweaty struggle to get out of the maze. I have no idea how I managed this feat of idiocy. 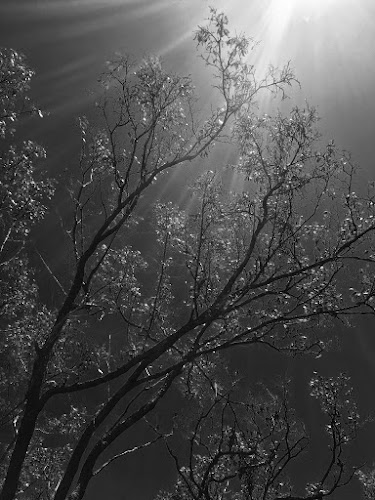 Twenty minutes later all was well, feathers unruffled once more... 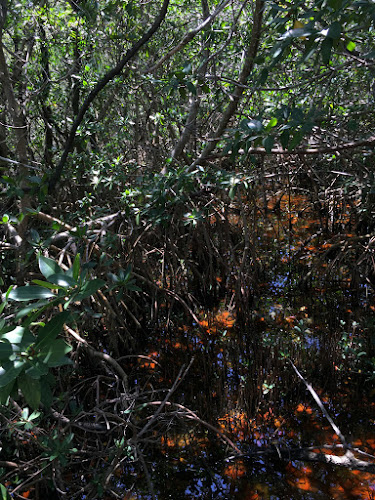 The wretched dog enjoyed himself enough to demolish a bowl of fresh water: 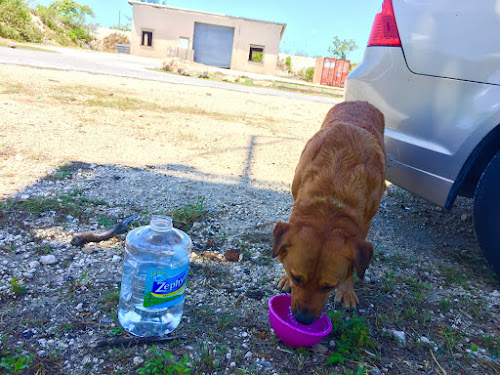 Rusty was far from exhausted so we had to tour the old Hawk Missile site, a Cuban Missile Crisis installation now rotting away. And from the tops of the berms that protected individual rocket launcher sites we could see all the way back to the Riviera Canal: 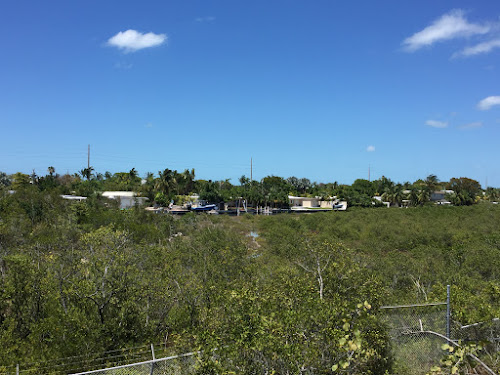 In this picture you an see the berm of mounded sand and gravel built to protect the rocket launchers: 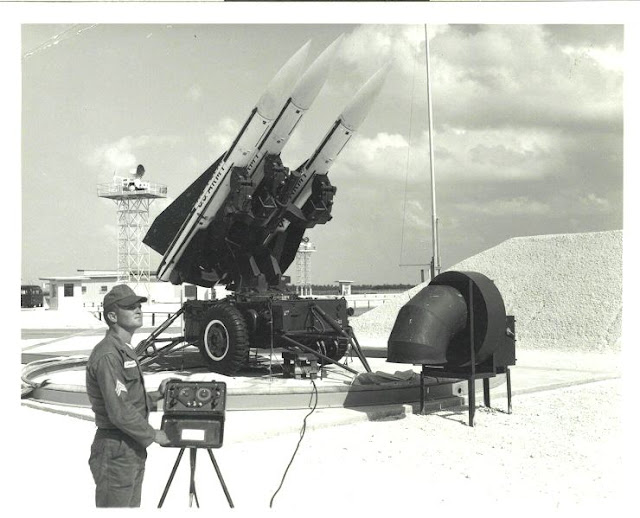 We climbed them together and I felt like I was twelve years old again, except that now I have gray in my beard and an iPhone instead of a slingshot. 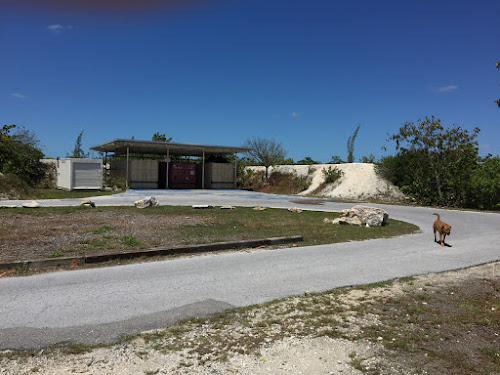 And a brash brisk explorer of a dog: 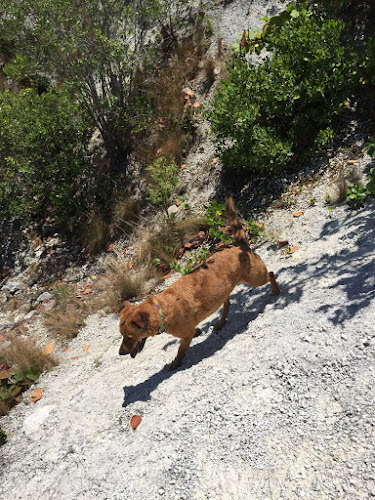 They are trying to beautify this area too, but I hope it remains as open and untrammeled by signs and fences. Fat chance: 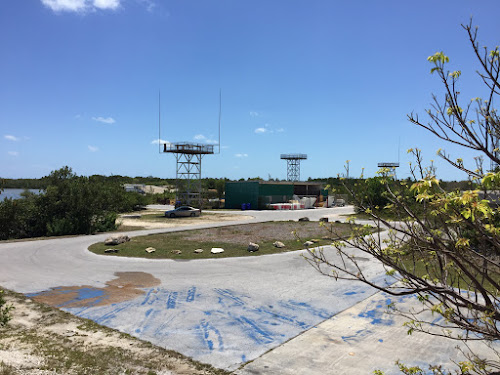 My dogs, past and present love exploring this place: 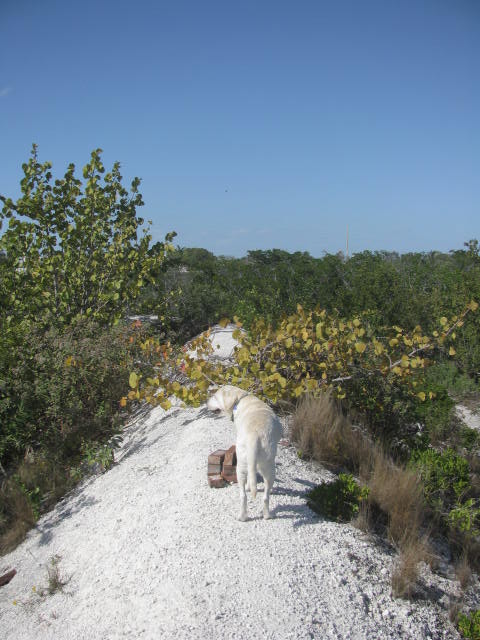 Past above and present below, barely visible through the leaves: 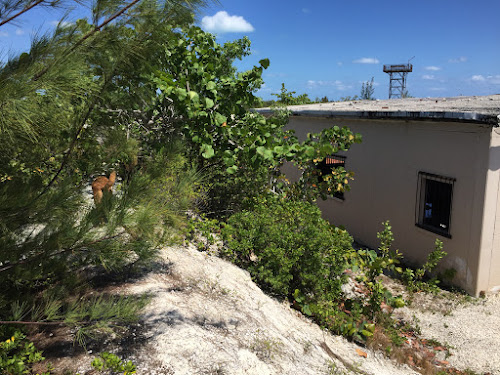 Another berm-top view, this time of the Las Salinas and Oceanwalk complexes at the eastern end of Key West: 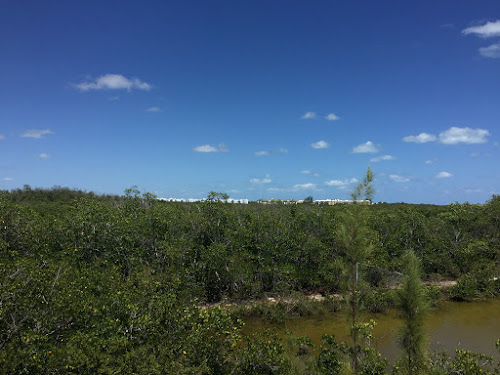 They have done a lot of clean up around here which is nice, I grant you: 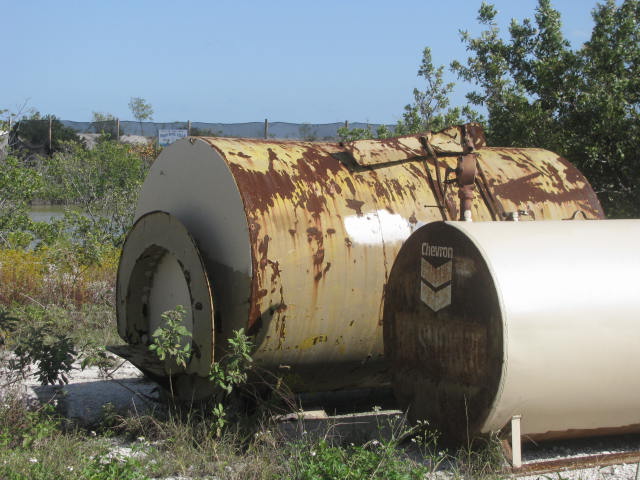 Rusty will be sad if this place gets closed off or overly gentrified: 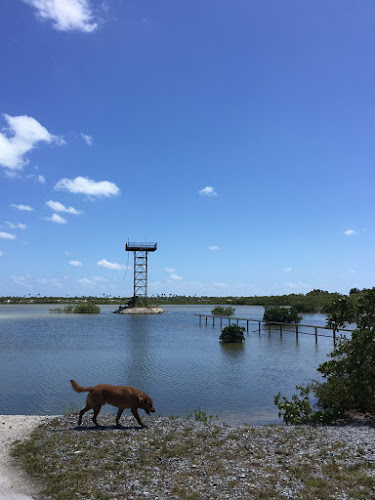