I have walked most if not all the lanes of Old Town and this one I wrote about in january three years ago. Here it is again. 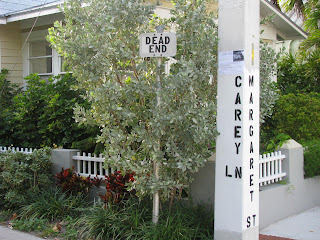 Carey Lane according to some people (not me!) is also known as Thompson Alley (not Thompson Lane which exists in various truncated segments around the city). J Burke Wills noticed, as did I that Carey lane appears to be an extension of Angela Street which runs alongside the cemetery north of Margaret: 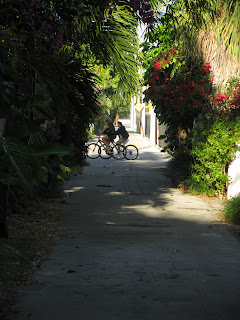 Wills suggests the lane may have been named for George Carey an English sailor known for his preference for silk top hats, perhaps a pleasure derived from operating a haberdasher's downtown. There was also apparently a female Carey called Alicia who was known for her ice cream in the late 19th century. In any event Carey Lane is a well tended dead end close to the main entrance to the cemetery. The city has been busy tending to the curbs and sidewalks in this area, as evidenced at the entrance to the lane: 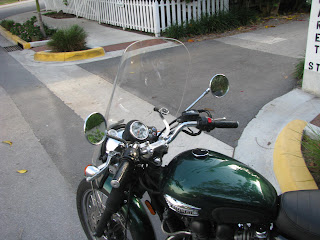 The homes on the half block are pretty and well maintained and made a quite delightful, albeit brief stroll on a windy winter afternoon: 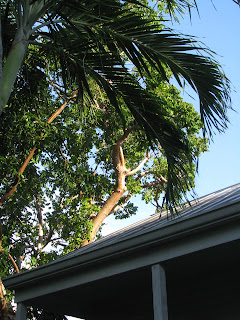 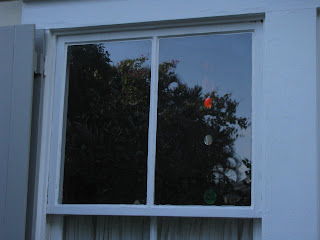 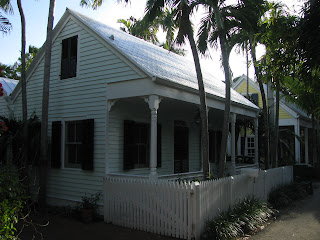 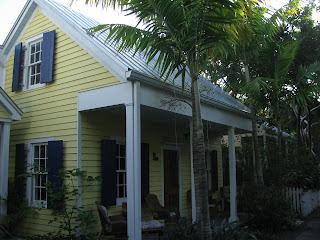 A Scooter in Turkey has made me self conscious about taking pleasure in photographing bougainvillea, but life is nothing if it is not lived dangerously: 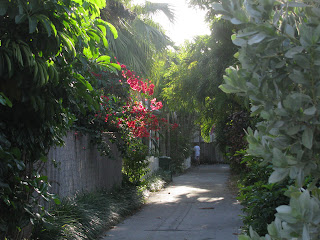 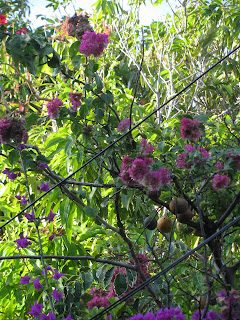 Carey Lane enjoys fewer grumpy signs than other parts of the city, but I did find one: 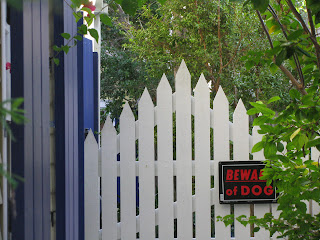 It was a beautiful winter's afternoon in Key West. The sun had finally made an appearance after a gray start to the day with heavy clouds. The east wind had picked up and the trees were rustling and shaking. Temperatures were perfect with no humidity at all and as I strolled I looked in the window and saw the awful god of television sending messages to his entranced acolytes gathered in a dark room. Further up the street there was a dude sitting on his steps reading the paper and I couldn't resist making a comment about the foolishness of being indoors on such an evening. I think he considered me intrusive so I went back to minding my own business: 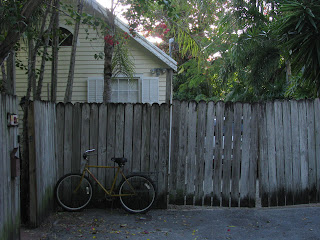 The irony for me lay in the fact that the TV home had a splendid porch with comfortable wicker chairs, while the paper reader was scrunched up on his steps, lacking as he did all outdoor amenity. And on the subject of "none of my business" I had to ponder the weirdness of importing Spanish Moss to Key West. This stuff is to be found in abundance north of Lake Okeechobee in the pine forests Up North but in the sub tropics, 60 miles north of the Tropic of Cancer it seems you need to tie it to the tree to make it look as though it has taken root, as it were: 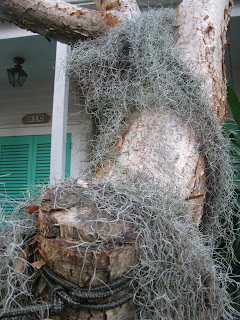 It may just have been the day, the perfect weather, the fact that I continue to be gainfully employed in these difficult times, I don't know; but I really liked Carey Lane. 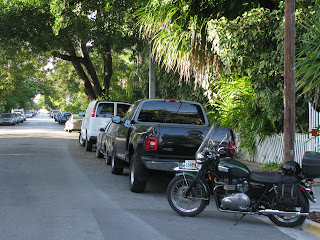 And that main thoroughfare called Margaret Street wasn't looking at all bad in the brilliant sunshine. There I was in shorts and short sleeves and people in Oklahoma are buried under an ice storm. Oklahoma is definitely not OK at the moment, no matter what their license plates say.
Posted by Conchscooter at 12:01 AM No comments: