So I have three pictures and as I work with this alternative blogging format I am struggling. However I do want to have an alternative to Blogpress and I am trying to keep an open mind. Blogsy may be better if I can master it. I know some readers want bigger pictures and this seems to offer them. Sigh

The pictures look larger, even though they are laborious to upload, thirty seconds each, instead of instantly as on Blogpress. Here's a second one.

And here for good measure is a third.

I like Blogpress because picture uploading is instantaneous and I can line up the pictures and write between them. Here I twiddle my thumbs while the pictures selected are uploaded and I can't put them all on the page before I write.maybe I can but I have to work here to learn how I can format the page on my iPad. However this is a much better App than the original Blogsy I checked out last year when you couldn't even write on the same page as the pictures! And I can upload more than one picture per post. So if you like this look let me know and I will try to switch to this app. It is not at all intuitive so I may lose patience with Blogsy.

Posted with Blogsy
Posted by Conchscooter at 2:42 PM 8 comments:

A Short Walk In Des Moines Part One

I have long held to the belief that intelligent telephones drain the intelligence from humans and I would resist joining the herd for as long as I could. However the inexorable march of technology drives skeptics like me to the curb which is an unpleasant place to be. 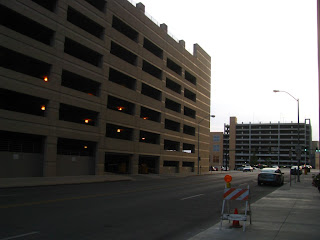 Consider that when I was a child when lost it was natural to approach a stranger, preferably one grounded in the unknown community by a job, and that stranger would know how to get where you were going. It was normal for gas station attendants to know their communities and it was normal for them to give directions to strangers. 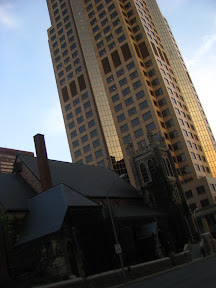 Nowadays the idea that a stranger can get directions from some semi-educated clerk in a store or behind a gas station credit card machine -which customers operate by themselves these days- is ludicrous. Thus it is almost impossible for a Stranger in town, traveling without a smart phone, to find his way. Thus one has to ask what advantage do paper maps have over electronic ones in this modern google-mapped world? They are nothing more than back up in case of power failure or nationwide terrorist attack by electro-magnetic pulse. 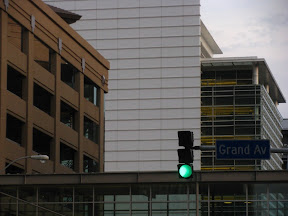 In light of the fact the end of civilization is not in sight, perhaps over the horizon if we listen to voices other than those of the mainstream press, I decided I could join the herd. I still know how to read a paper map after 50 years of doing it but watching my wife become an expert navigator after years of failing hopelessly, convinced me it was time. And so it was I found myself walking the streets and paths of Des Moines convinced I knew where I was going. 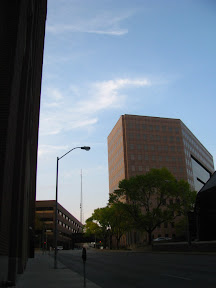 I strode with confidence through the wreckage of people at the Greyhound station, avoiding the touts like a big city pro and promptly took a wrong turn. I realized I had to get my own start on the program because the phone has no walking mode that I have yet found and the little blue triangle was taken aback by my lack of progress and left me stranded while it paused and tried to figure out what kind of vehicle made no visible progress.


I had almost six miles to walk to get to the hotel which I figured would take a couple of hours. It was not cold in the asphalt jungle and even though the sun was hidden by clouds and darkness seemed to be falling fast I figured I could enjoy a short walk through Des Moines. It seemed wholesome after so much sitting to stroll with my suitcase over one shoulder and my courier bag over the other. I was balanced and the load was light. I walked and looked as I went. 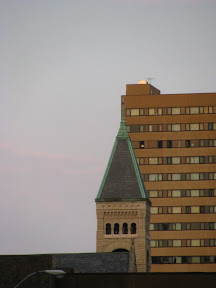 The first thing that struck me was the quantity and quality of the parking garages. The whole area was filled with multi story parking lots designed with all the care one expects an architect to lavish on an office building. They were as tasteful as a parking garage could be, not like the grey cement horrors inflicted on the good citizens of Key West. 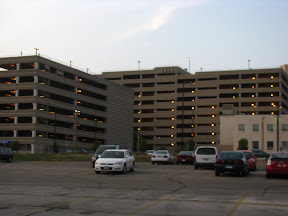 These were in shades of brown and gold, delineated with stainless posts and wires, illuminated in the dusk by the warm glow of orange sodium lighting. Clearly the supply of parking is inadequate as there were plenty more cars parked on the city streets. I guess the more you build the more they drive. If the electro-magnetic pulse does come some unhappy day these immense garages will be suitable monuments to the era of JH Kunstler's ironically titled Happy Motoring. 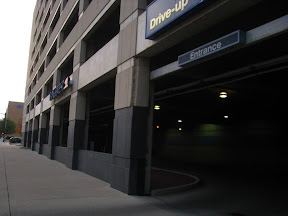 I had the gall to stop a harried looking man with white hair and glasses who had the misfortune of stepping across Grand Avenue onto my piece of sidewalk. He wore a conservatively blue and white striped shirt, carried a briefcase and looked like a businessman rushing to a meeting. Nothing deterred I asked if all of Des Moines consists of parking garages. He paused and looked around resembling slightly Steve Martin pondering a comeback but was forced to admit that yes, around here there were a lot of places to park. He looked taken aback by the revelation forced upon him by a stranger with an odd accent. He slipped into Chamber of Commerce Mode and waved at downtown talking about the riverfront named by French explorers for some reason "Of The Monks" ('des Moines' in French), and the library a modernist copper cube designed by a British architect and the park of modern sculptures at 15th Street. 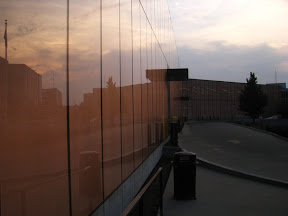 He brightened as he remembered he lived in a culturally rich town, a place with more than many parking garages. 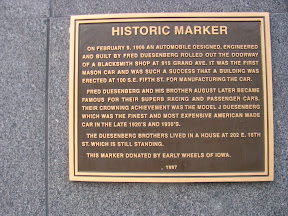 I blame myself and my Aspergers but somehow we got onto the forbidden topic of politics and Iowa's role in Presidential elections. I wondered why Iowa figured so little in the national debate and Steve !Arron bristled at the suggestion. "President Obama got his start when the Iowa caucus came out behind him," he said. But I said there is much more to Iowa wondering why I know so little about the state that dominates reporting for several weeks every four years. For this Obama supporter as he shyly admitted he was to a perfect stranger, the caucus was as much of Iowa as the nation needed to know about the Hawkeye State. "we just had a strategy meeting," he added as though to convince me of the worth of the straw poll vote open to anyone in this white bread state that supposedly sets the tone for the Presidential Election to come. 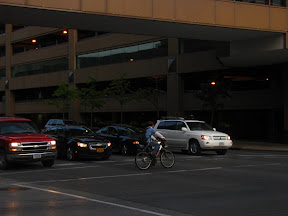 I followed his suggestion and too a peak inside the library which on first contact looked within as conventional as it looked unconventional from without. I felt like a hobo going into the library loaded with luggage so I beat a retreat and contented my self with admiring the statuary in the park. 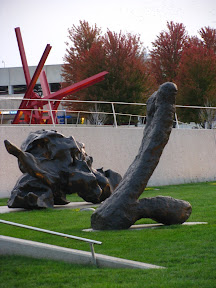 Is it just me or is that thing particularly phallic? - Posted using BlogPress from my iPad
Posted by Conchscooter at 1:46 PM 3 comments: