It occurs to me that over the past few years I have written about an endless array of aspects of Key West and as I close in on the end of this blog as an active daily record of my life in the Lower Keys I am at a bit of a loss as to which essays to pick to highlight on the way out. In this case I figure the Literary Seminar is coming up again pretty soon next month so here I offer a few thoughts from 2008 about life music and poetry in the Southernmost City. I am sad this blog has to end tomorrow but I am looking forward to our new endeavor at http://TheKeyWestLocal.com as I hope you are too. 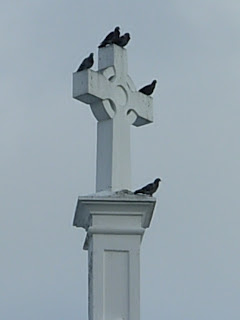 "Carol invited me to a reading," my wife said as she curled up on the couch, leafing through the Sunday Citizen. "I wonder if I should go...?" A girl's afternoon out, thought I, which means I get to do my thing. "Friendships need to be nourished," said I sententiously so we drove into town and my wife went off with her friends to some sort of post-feminist reading circle as I thought, and I took the wife's scooter from her workplace and rode into town. Her Vespa ET4 has been languishing while her arm is in the surgical cast and the plan was for me to ride the 150 home and tart it up a bit. But first I had some culture and color to absorb. 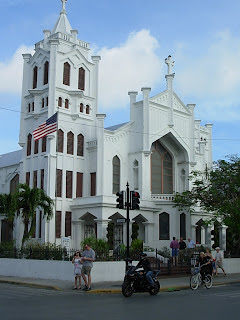 My wife's teaching assistant and office manager were salivating at the prospect of spending the afternoon at Jack Flats on Duval with their men while watching The Game, however for me an afternoon off means a meander through Old Town on my (wife's) Vespa taking pictures for future blogs ending up at the Old Pile seen above, St Paul's at the corner of Duval and Eaton, where the Philadelphia Brass Quintet was giving the first in this season's series of "Impromptu Concerts." 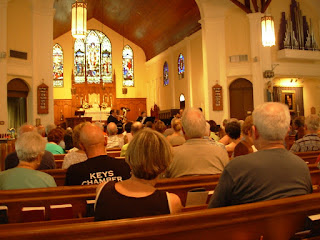 On the steps of the church I met a couple of friends who invited me to sit with them and I did. The quintet did their bit in a concert I rated okay,interesting selection of pieces but the execution seemed uneven to me. As a former tuba player I love the instrument to death but it can too easily kill off the melody in a small, relatively small space. 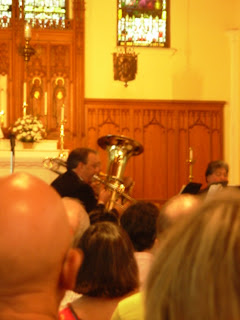 The sun was setting as we streamed out of the church and key West always looks lovely in the light of the dying day, with a purplish tinge on the sky and warm gray tones down below as street lights come on and open doors throw squares of orange light onto the sidewalks. I took the long way out of town along the south coast startling an ambling convertible on my 50mph "moped." The ride home was delightful on the little Vespa. 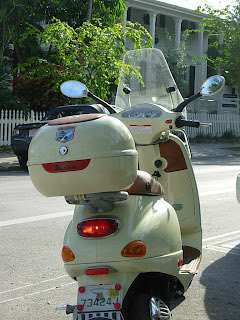 Not least because it buzzes along merrily at 65mph and even allowed me to pass a dawdling kid in a souped up hatchback and I get silly pleasure from surprising people with my wife's little scooter.


That was the last pleasure of the day. Half my enjoyment of the music came from actually bothering to show up, a sense of being rewarded for the effort. The ride home was fun no doubt, always a pleasure but my wife's "post feminist reading" turned out to have been a poetry gathering at the Key West Literary Seminar. Well, bummer, she met Billy Collins. And I didn't. Grrr.


It was sometime last year I was wandering the stacks at Voltaire Books on Simonton Street when I opened a slim volume of poetry called Sailing Alone Around the Room, if only because I used to be a single handed sailor. And if you think the book is about sailing, think again. I burst out laughing at the very first poem titled Another Reason Why I Don't Keep a Gun in the House, and if you think it has anything to do with the Second Amendment: think again. Think of an innovative Beethoven composing for a dog abandoned at home. 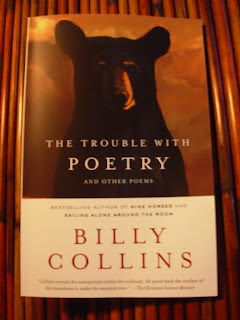 My always thoughtful wife brought me home a copy of another book of Billy Collins' poems, and if you look at the title you'll know why this is a book you have to own. I've enjoyed only a very few 20th century poets, mostly writers out of the trenches of World War One, and I have mostly been drawn to romantic, rhyming, poetry-like poetry from the classical 19th century. Billy Collins has been a breakout for me, and my wife knows this. 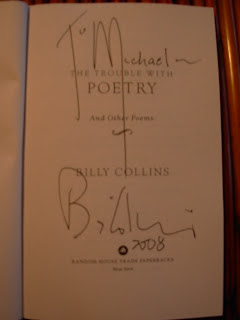 Post feminist readings have a lot to answer for. And so do assumptions.
Posted by Conchscooter at 12:01 AM 10 comments: