When I first published this essay on the 29th of February 2008 I titled it "Waterskiing with Lookouts," because it includes a story of old time Key West. Which is why I am inlcuding it as part of my daily retrospective of some of my favorite essays over the past four and a half years. Don't forget please to bookmark http://TheKeyWestLocal.com to follow my blog to its new daily home on January 1st 2012. 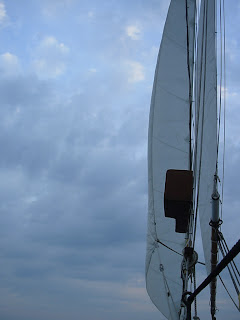 When Jan sent the invitation to take a sunset sail to celebrate Lucy's birthday I remembered what I had previously forgotten: that I hadn't been sailing in a long time. We sold our catamaran two years ago and that was after it hadn't left the dock in a year and that was when we got back from our Bahamas trip in 2004 I think. So it was past time to get under sail and even though my wife was away shopping I wanted to go and celebrate in style. Carol and Chuck had fun also, on the schooner Hindu celebrating Lucy's unspecified birthday: 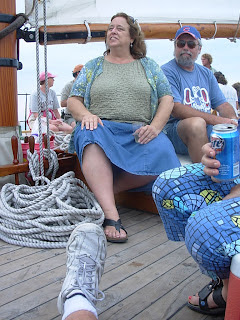 And so I did, and it was perfect, and it's one of those things one should do more often and instead we leave them for visitors to enjoy and they do. The eager tourists were sweet and spiffy in their name brand clothes and excellent good manners as they listened to Captain Kevin expound on the joys of Key West. They were entranced and I liked counting myself among them as we lurched out into the flow of the harbor life. I remember when I used to run a sailboat for cruise ship visitors, they liked getting out on the water as much, if not more, than resident Key Westers. Of course residents get all squirrely about playing tourist in a home town where being local is a badge of honor like being made is an achievement in the Cosa Nostra. So, to avoid the dreaded tourist label we skip the sunset cruise, and what a shame that is. 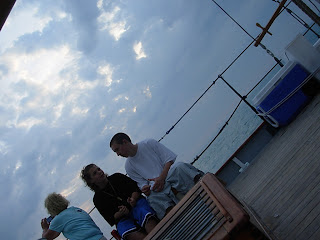 In actual fact the actual sunset sucked, not least because the cold front that was getting ready to climb into bed with us was loading the skies with thick gray clouds, but the sail was just fine without a wild display of purples and yellows and orange across the evening horizon. 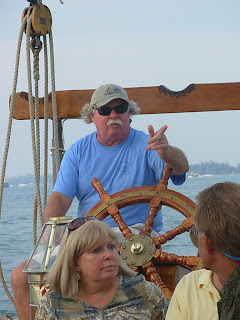 Before driving us out of Key West Bight Kevin the captain gave the safety speech in a thick New England drawl and he pointed out that Key West is home to the second largest (winter) fleet of sailing schooners. Who knew. It was also his pleasure to point out that five of us on the boat were also licensed Captains, but I for one was busy ordering room service, too busy to be an actual licensed captain. 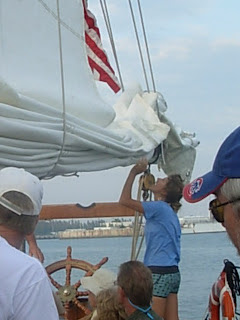 Room service came courtesy of the fresh young things living their adventures in Key West before old age and respectability descend on them. They raised Kevin's sails and then turned their hands to hauling out the wine and the beer, complementary they called it; free I called the ice cold can of Yuengling. I dislike euphemisms. Then the youthful adventurers brought out trays of bruschetta sandwiches, fried bread with meat and cheese and peppers and it was all too delicious. " Who told them my wife is out of town?" I asked, glad to have dinner served to me. Everyone was too busy eating and drinking to reply. 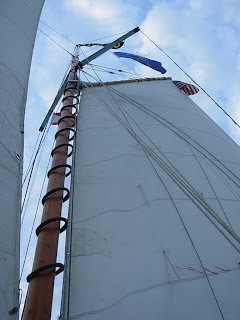 And so it went, this most civilized means of travel, a warm teak deck to sit on surrounded by true friends who know how to live and let live, people with lots of stories to tell and ready to laugh. We were I think, a little rowdy, though it was cheerful middle aged rowdiness, glad-to-have-woken-up-this-morning good cheer. I was thoroughly happy watching Kevin start the engine to get us through the tack, and then listen to the silence of sail as he entertained those lucky people sitting in the front row as we sliced past the Key West waterfront including this crowd of people perched on the pier at Simonton Beach peering at some unseen thing, the missing sunset perhaps: 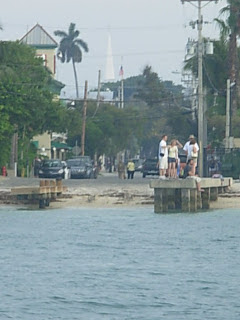 By the time we had tacked out to the end of Fort Zachary Taylor it was getting quite dark and we had been crossing tacks with all the other schooners out hauling people around the harbor, including trading cannon shots which was corny and funny and very loud. 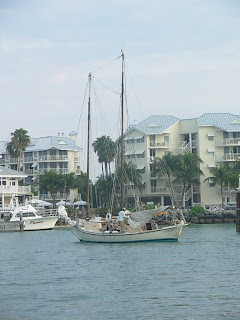 It so happened that Gretchen was one of our slightly rowdy party of locals and Gretchen was one of those five spare captains on board, and she started the cruise seeking approval for her decision to abandon buffing her 20-foot center console, and take the evening off instead. We all heartily agreed this was the right thing to do. And so it went. The thing was, that as the good ship Hindu turned around and rode the tide back towards Mallory Square and the lights came up over a darkened Key West, one of our number brought up the time honored lament about the old Key West, a phantom of a place before hotels lined the waterfront and the locals sold their heritage for a large pot of gold. Well Gretchen got to telling her stories of boating in the good old days (the only aspect of those days that I think I really miss) and we got to talking about water skiing, a hobby I never took up during my life on the surf riddled coast of Central California. 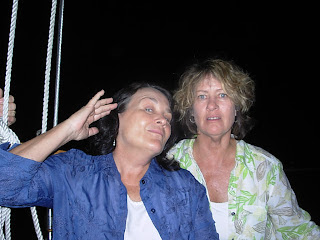 Gretchen (dressed in blue, stone cold sober, sitting next to a startled birthday girl who couldn't figure out what the flash was about) told of water skiing the flats even on windy days in places unmentionable, where calm waters lie between exposed flats that keep the waves out of the skier's path even on the very windiest of days. Ah yes those were the days, not least she said because skiing was allowed. Nowadays she said, the Coast Guard has made it an idle zone. That is to say a zone where the engine can be run at idle speed, not a place where only idlers may dawdle. She looked dreamily at the bright lights of the city's waterfront and remarked how odd the world had become. Nowadays you can only water ski with a lookout, she mused. And I wondered what it would be like, not just to water ski, but to do it like an outlaw, a gang member riding a wave while the Coast Guard's back is turned. It sounded very exciting, and I felt perhaps we should score one for modern day Key West, a place where lookouts, the epitome of lawlessness, find employment. 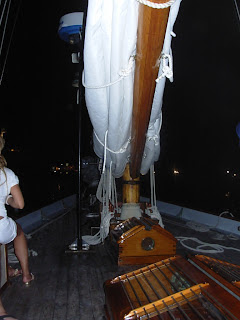 Oh well, I'll probably never know as teak and canvas and six miles per hour is more my waterborne speed.

It started to rain on the way home and I was so energized by my gentlemanly sail I failed to stop to put on my waterproofs and got home riding the Bonneville tinkled upon and buzzing. What a great day.

Posted by Conchscooter at 12:01 AM 10 comments: Links to this post