I went to the Red Garter once and I wondered what the fuss is about. Sad eyed Eastern European women walking around an improbably decorated room pretending to find the patrons fascinating. I stood there with some grossly overpriced drink wondering where they found so much blackness to decorate a room. They've hung a sign on the front door which seems less than likely to work 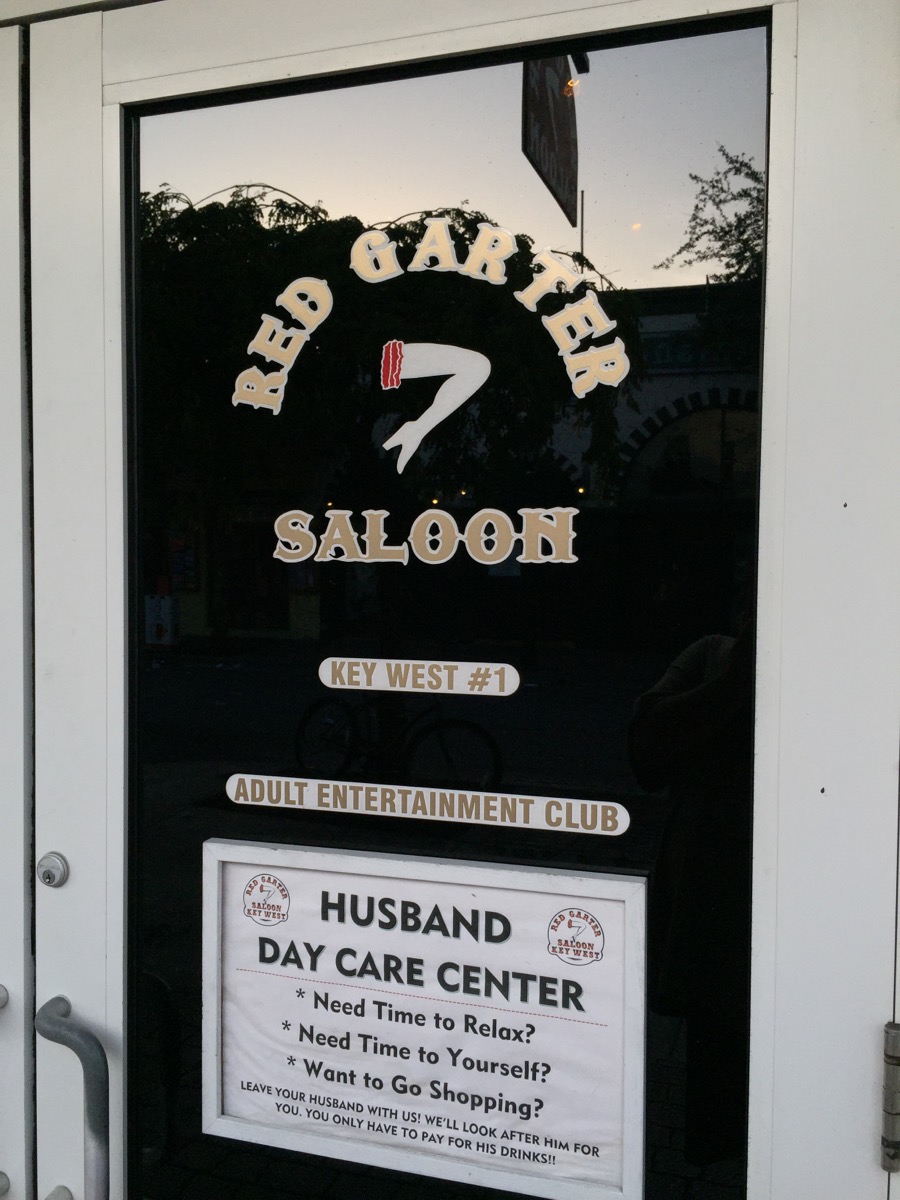 One isn't allowed to take pictures to preserve the sensibilities of the bourgeoisie but Google is your friend in these difficult circumstances once again. Gay Paree at the turn of the century it ain't but it's the best that 21st century straight Key West can manage. Drop off your husband here, have no fear and go shopping. I like to think the darker recesses of the 801 further up Duval show gay men a better time but I'm not going to hunt for images of that glory hole on the Web. 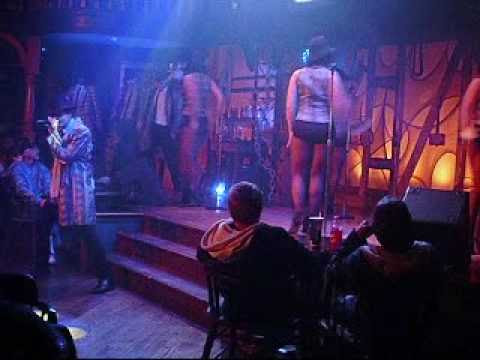 I am certified to dive but I gave up diving as a bad job owing to all the paraphernalia required and in the end I'd rather go ride a motorcycle and risk dismemberment than go floundering around underwater and risk blowing up a lung. But having spotted this delicious looking dive tank I may have to reverse course. Do people really dive with pink tanks? Great stuff., I'm jealous. 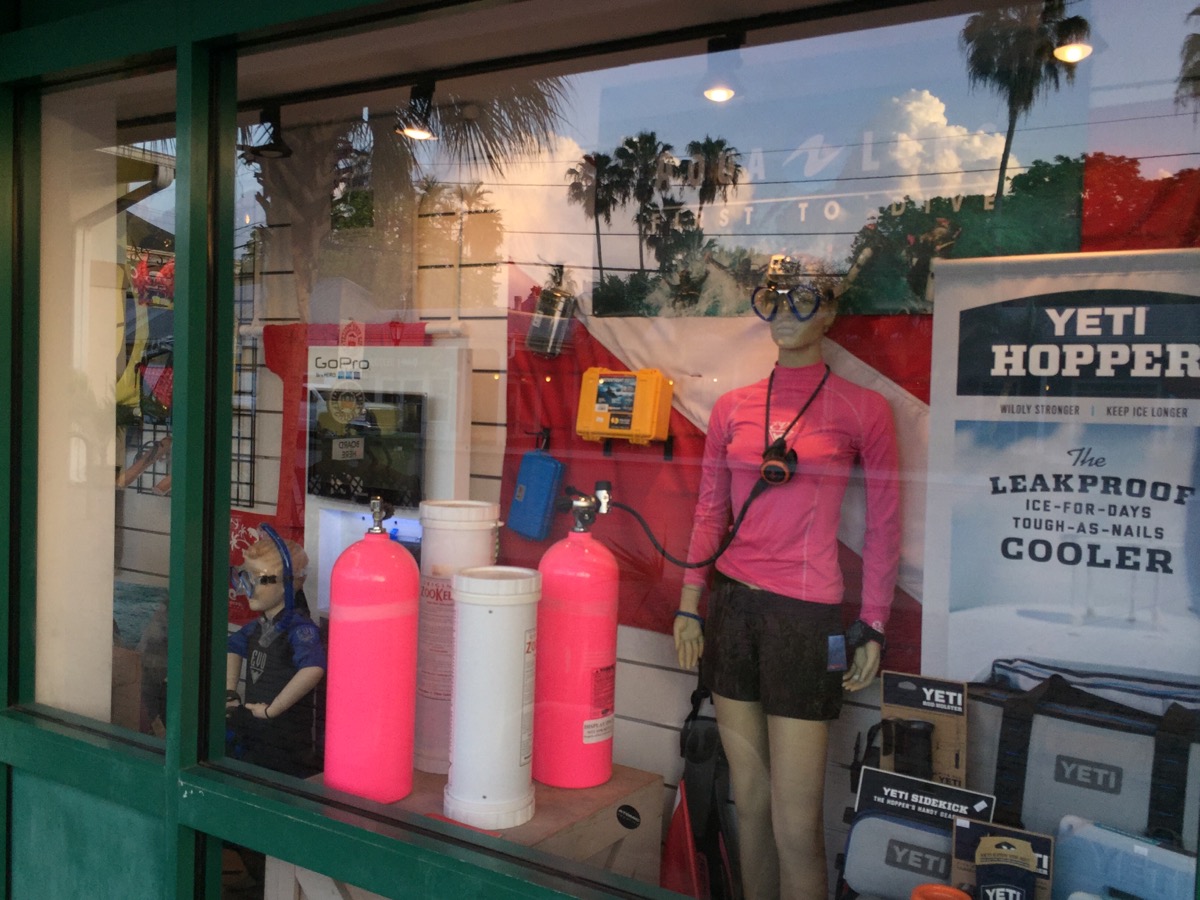 I am not looking forward to the next year and a half of planned road reconstruction between Big Coppitt (Mile Marker Ten) and Key Haven (Mile Marker Five) when the state is planning to repave the four lane highway. Apparently the engineers came to Key West to plan the two-and-a-half-year wreckage that was the reconstruction of North Roosevelt and when they drove the four lane highway they were appalled by what they found. It is a nightmare of pot holes and torn asphalt, worthy of a forgotten African highway in the early stages of self destruction. So I'm glad it will get rebuilt but it means more road works for ever and ever Amen. The Boulevard work seems to have been brilliant mind, with properly timed traffic lights and no flooding yet in the mild rains we have had so far. I have high hopes for the next round of work and look forward to a billiard table smooth highway out of Key West. Next year. 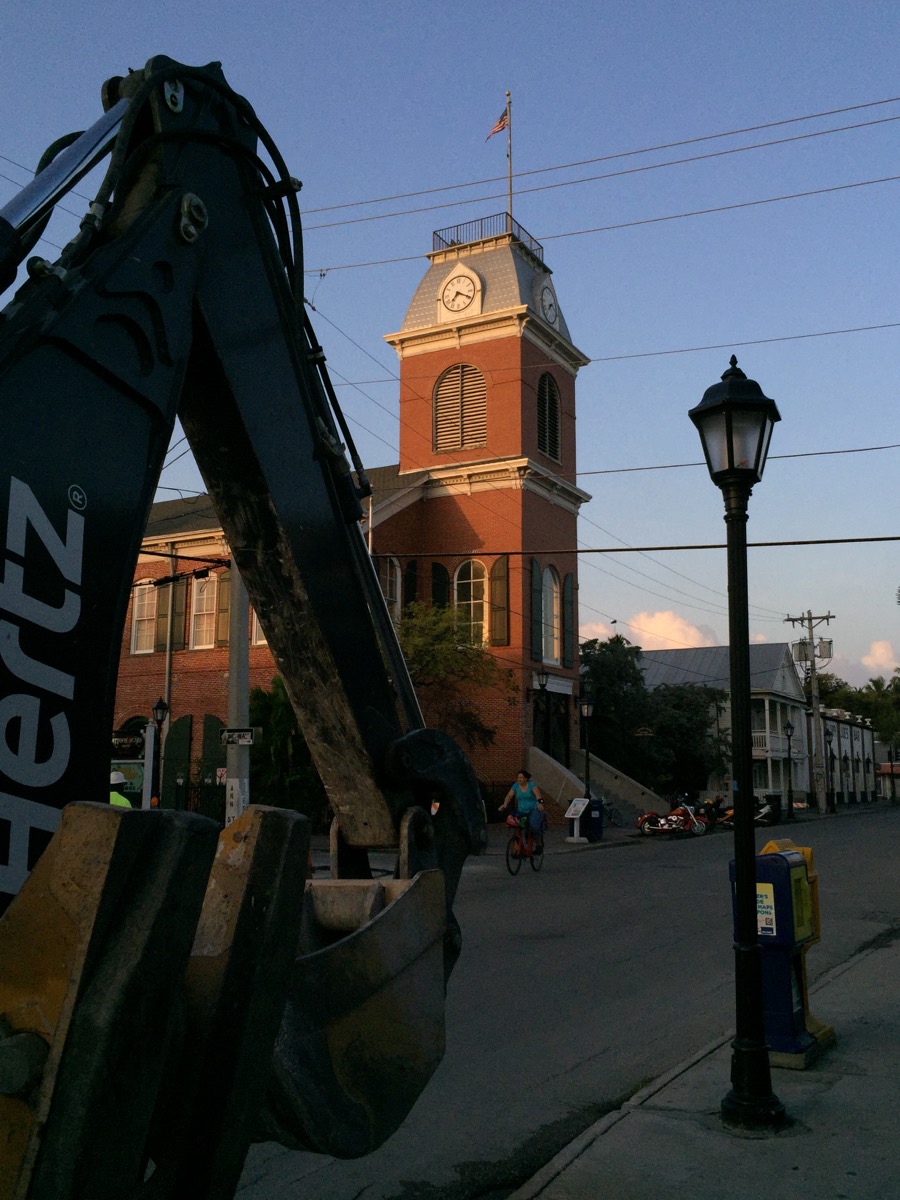 Meanwhile downtown Key West has been torn up for much of the winter for sewer work or some other thing. I have to say it was bizarre seeing the streets in the busiest part of town at the busiest time of year closed off for construction work and now the city is not completely saturated with people the machinery has moved out of Duval and Eaton and Simonton Streets. Judging by the picture above it would seem it is now Greene Street about to be torn up. 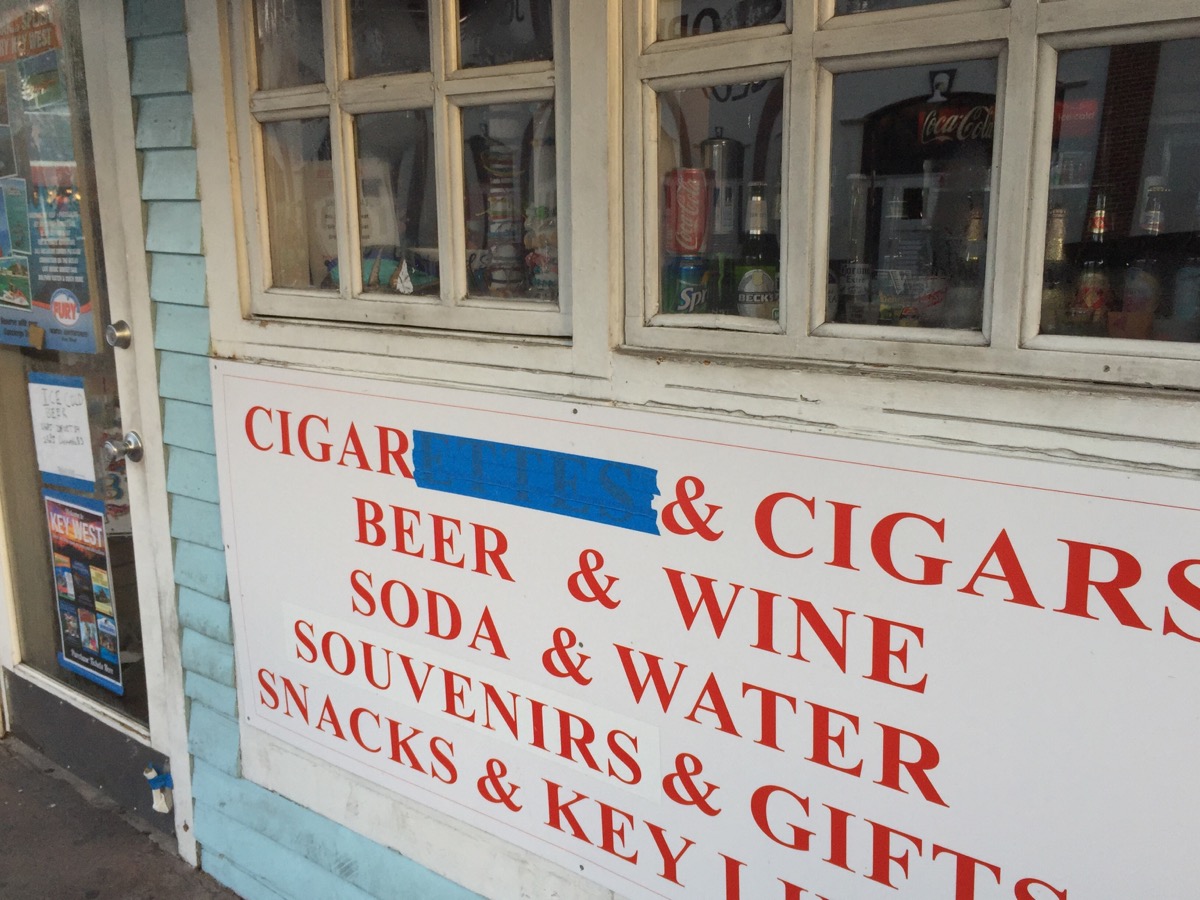 The sign above amply expresses the lack of giving a toss that exemplifies the mass tourist economy. I know that running a business costs money but a lick of paint would work wonders for a lot of the tatty smudged and grody downtown businesses. And the duct tape (or more accurately boat tape) to "clarify" the sign just looks like shit. I mean if you are going to overcharge people couldn't you at least do it with style and grace? 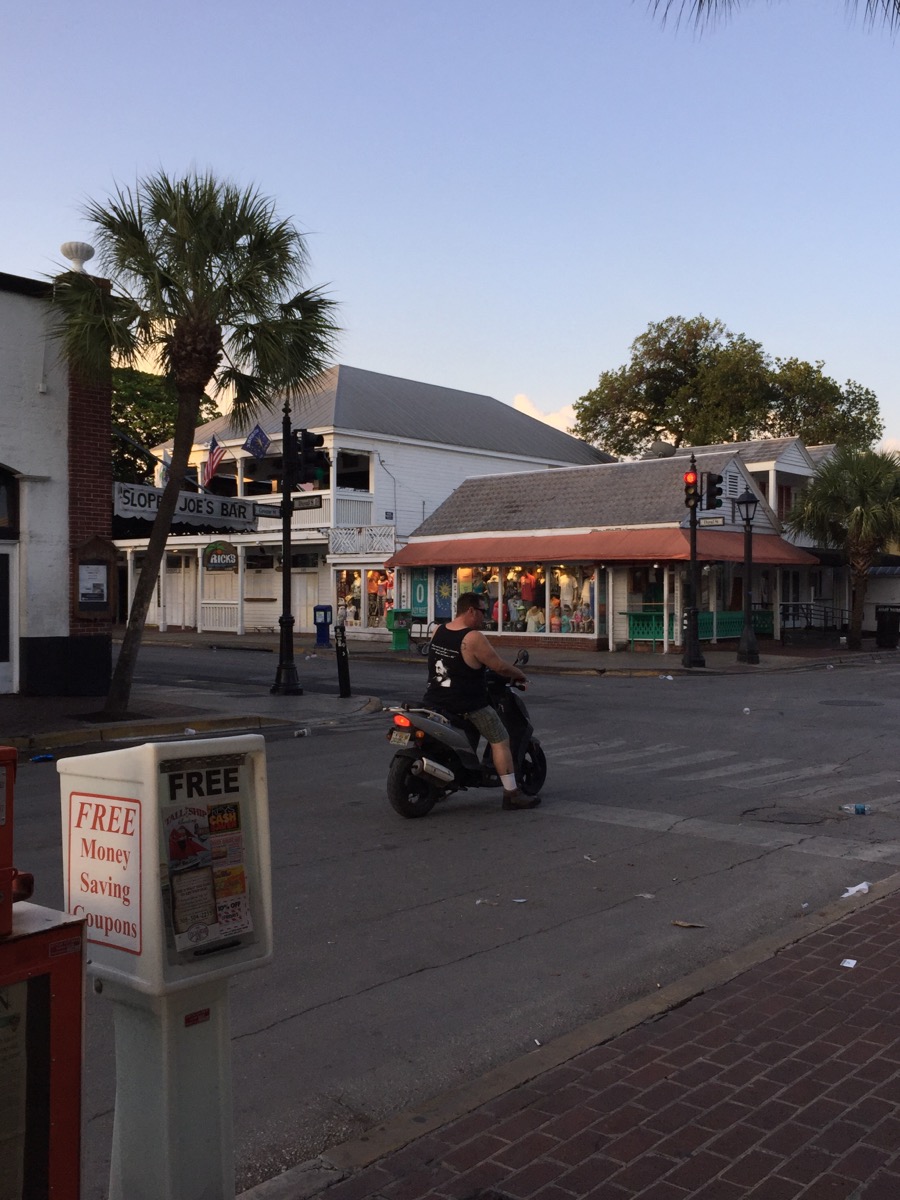 So I close with a few early morning street scenes, the time I like best in Old Town. The streets are dirty because the cleaning crews haven't got here yet and drinking from nasty plastic cups and throwing them in the street is the kind of tourism our civic leaders are eager to promote. But if you look beyond the signs of the night's excess the city retains its small town charm, its tropical warmth and bright colors and its variegated roof lines. 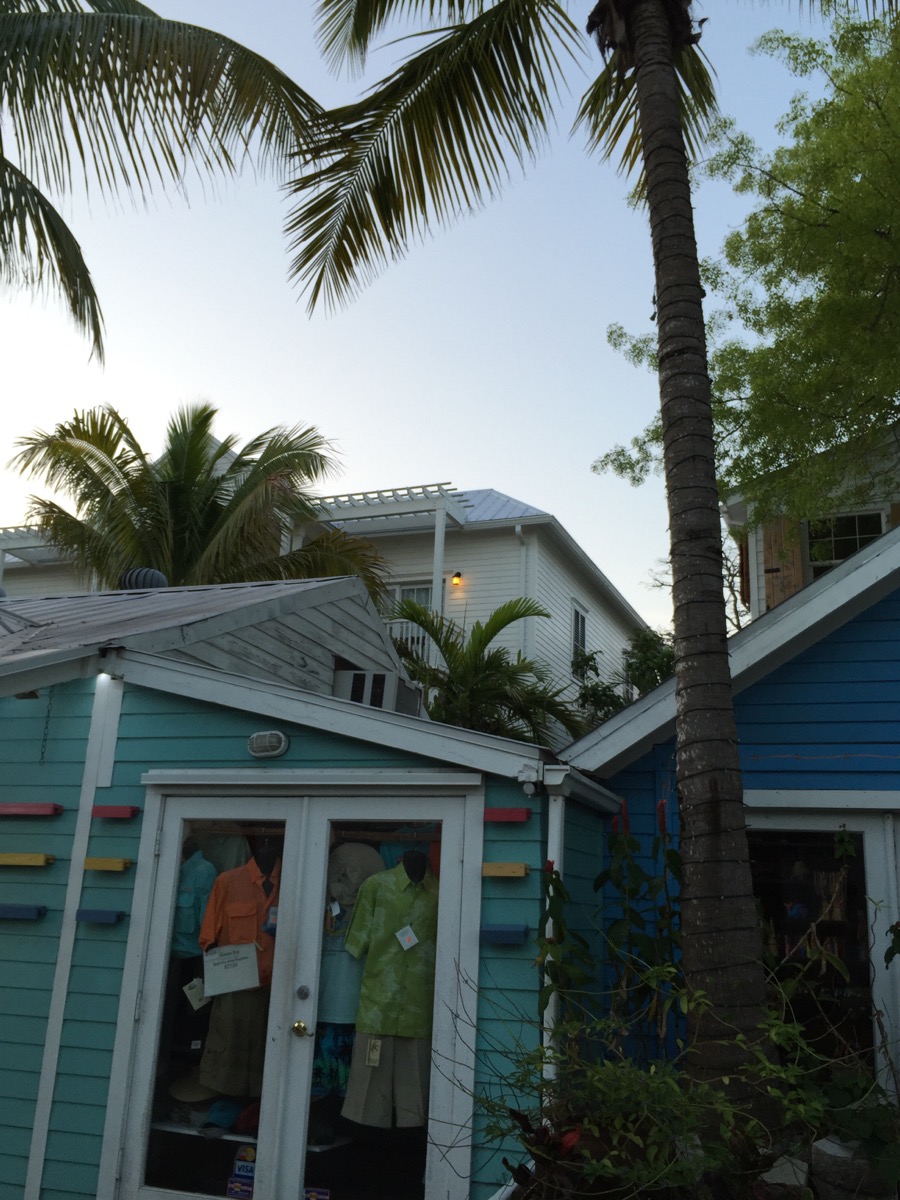 Some people can already be heard moaning about the summer heat that can be felt during the day. I love it. I sleep in air conditioning but I have shady areas outside my house to sit with my dog and read ( I read she watches the world go by) and I enjoy the lassitude of being in the heat without the need for doing.Dry heat makes my skin itch and renders my hair like straw but summer in the Keys is an invitation to enjoy the shade, go swimming and to go for moonlit walks with your dog. I hope the snowbirds never figure out how lovely Key West is in the summer. I've been in Kansas in July and I cannot imagine the attraction. July in the mountains....well that's different. 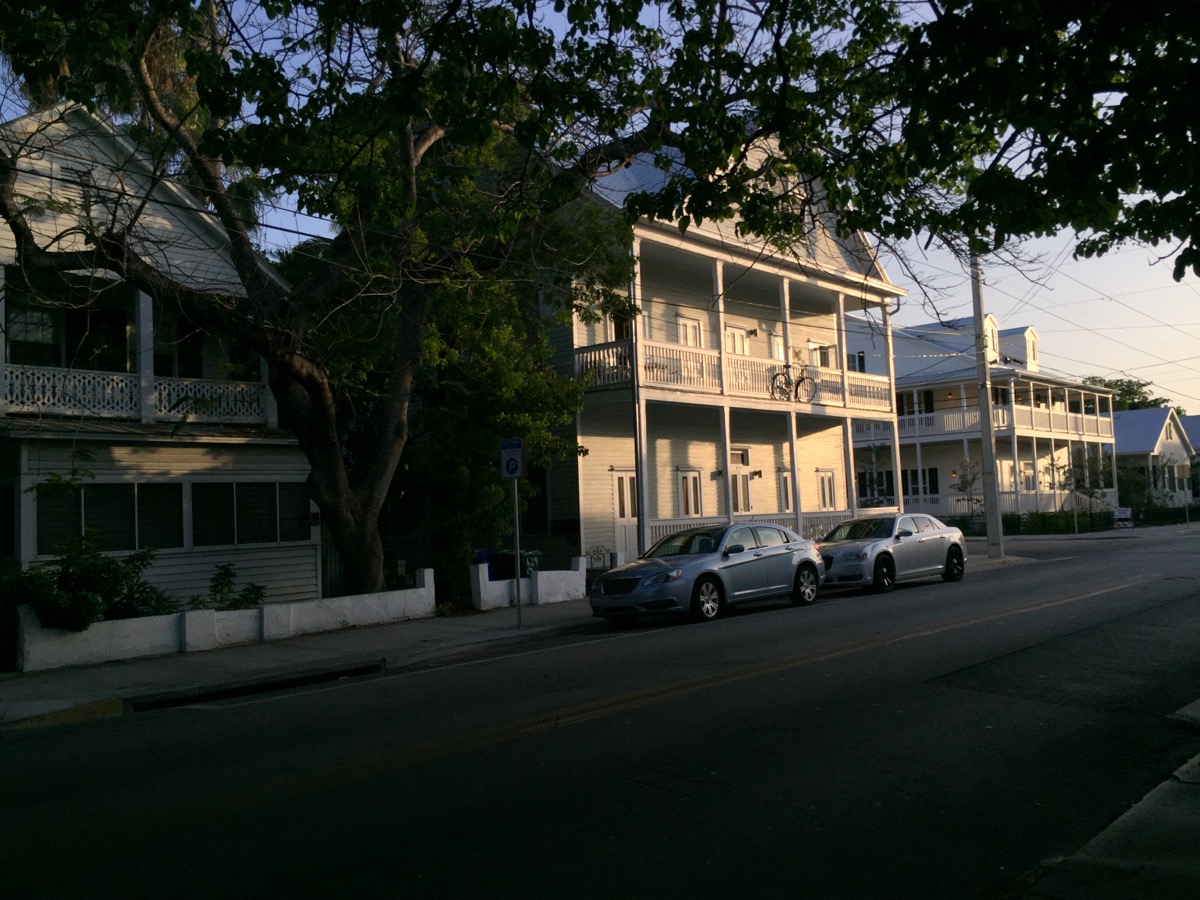 I like summer in Key West and if I can find the time to blast up to New England this summer once again for a few weeks away I wouldn't mind. Luckily summer lasts easily into October here and swimming season usually ends near November with the second real cold front. I have a busy summer ahead so I may have to stay close to work in Key West but that will be okay too. 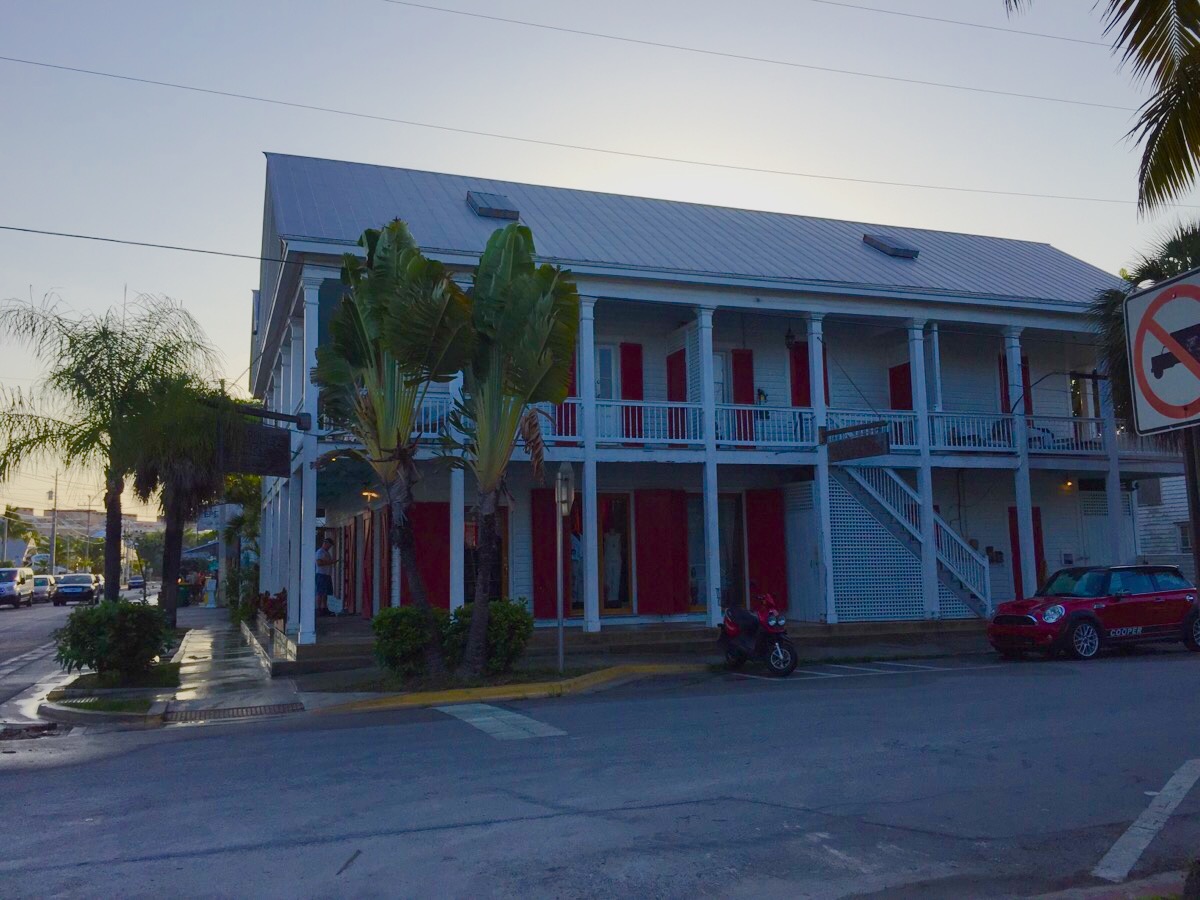 Doug Bennett of blogging fame enjoys his retirement in Key West, always a cheery greeting for passersby from his Caroline Street home. Check him out when you stroll by. 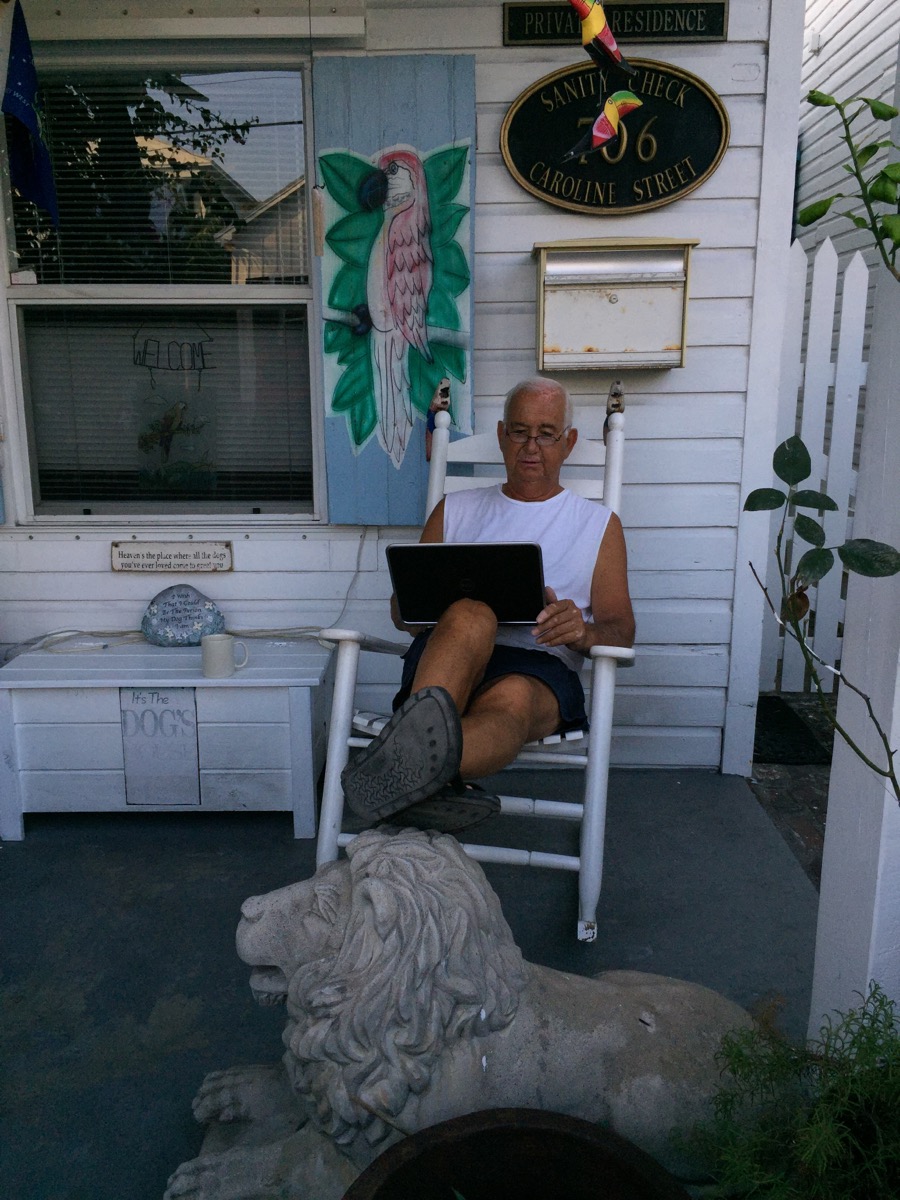 Check out the Travel and Safety podcasts this WEEK and listen to Brady Steffl tell tall tales from his motorcycle saddle. Thanks for listening.