The changes are moving into the van this week, a few desultory furniture sales, overstuffed garbage cans, such that we gave the pick up driver a $40 tip to ease his twice weekly pain. He seemed grateful. This week we are organizing our paperwork and restowing our voyaging preparations as the stuff in the van shakes down. There it sits awaiting our 3 am departure in about three weeks. Three am to avoid traffic naturally! 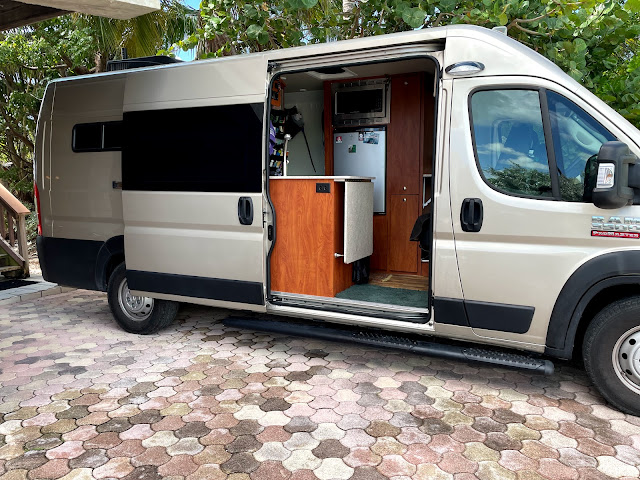 I took Rusty downtown early yesterday morning as part of Layne's plan to have me do some light shopping when Publix opened. It was a good plan but I have been forced to the opinion that Rusty is growing as bored with his limited walks as I am. I've photographed these spots for more than a decade and he's walked them weekly since 2016 so between us we have seen sniffed and photographed every nook and cranny I think. 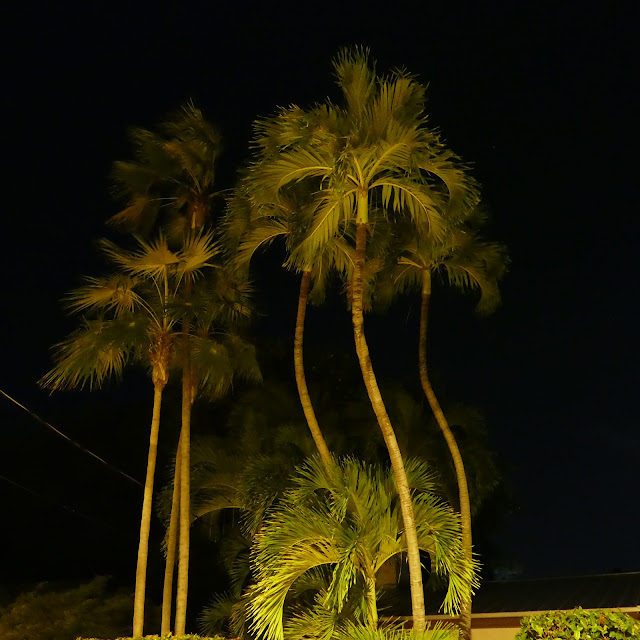 We walked in circles, Rusty leading this way and that and back again, and after the third such circuit we moved the car to his favorite spot at Eaton and Duval and he did the same thing again. After my third pass of Wendy's breakfast "baconator" and one more saunter in front of a peculiar silvery bikini stuck on a lily white mannequin and I made the executive decision and we headed to New Town against the ever increasing commuter traffic into town. 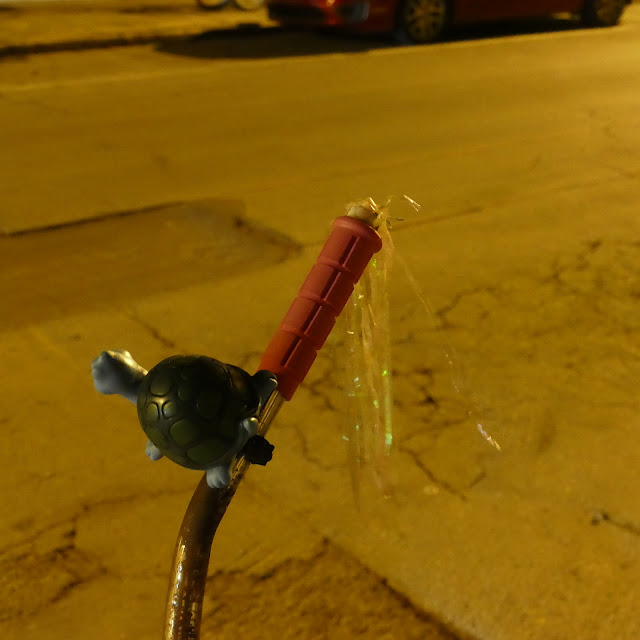 I met a family when we were selling stuff and they had just moved into the Keys from Up North. I recommended the museums downtown as places to visit. I like the Audubon House and Mel Fisher, possibly at an hour or three later than 6 am, but Rusty has his early morning needs. Actually any of them are worth a visit and if you can get yourself past the Hemingway House and the Butterfly Conservatory you get a round of applause from me. Which is worth what it cost you. 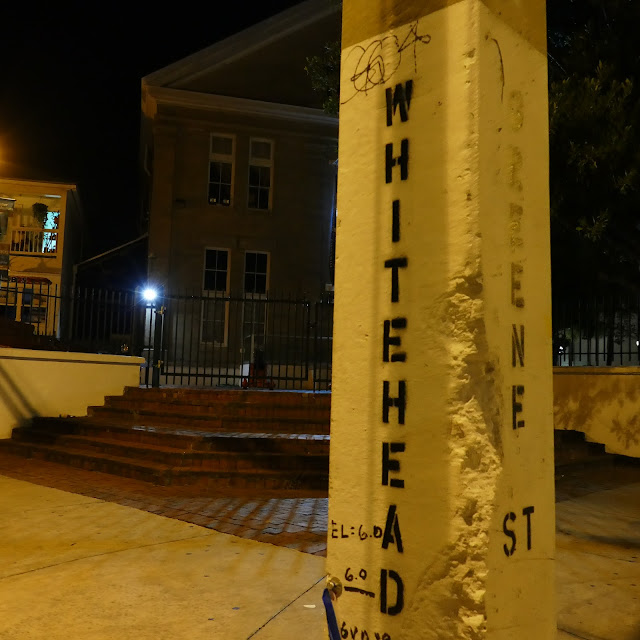 So we drove out to New Town, which is to say I drove while his Highness sat in the back with his nose out of the window causing cute attacks across town among the few others awake enough to notice him. 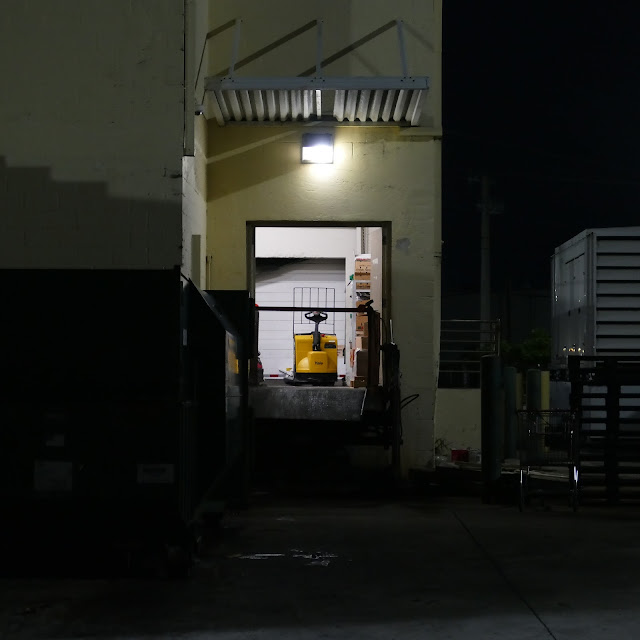 I have discovered Rusty enjoys the industrial underbelly of Key West, the loading docks for the stores in Key Plaza and Overseas Market. After 17 years dispatching I still have a lingering tendency to use police abbreviations, KP and OSM, for these delightful spots. In case you were interested the city has no proper geo-location for this area and we had to enter it as OSM, (Over Seas Market) and then in the notes we would add "in the rear" or "next to the loading docks" to identify this strip of unkempt cement. 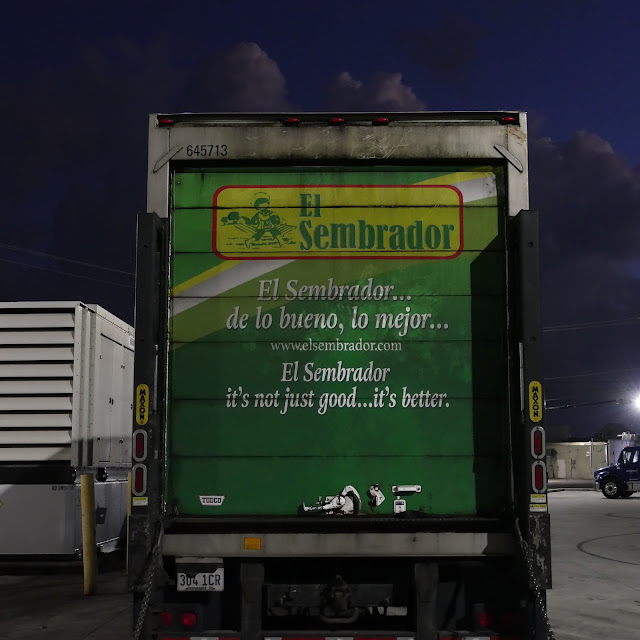 The "Sembrador" truck was apparently delivering frozen vegetable mixes. The title means "The Sower" as one who sows seeds and the translation from Spanish tickled me just a bit.  It really says " from among the good, we take the better." I liked that understatement. In American English, advertising always goes straight to superlatives, "THE BEST!!!!!" But here we have a modest belief in what is better than the worst but not necessarily the greatest. Lovely understatement. 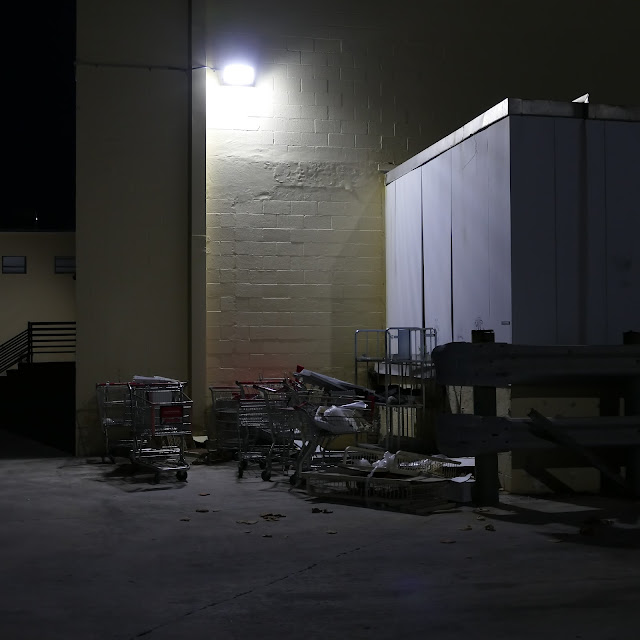 Later we came by here when the sun had risen and the discarded bread was being pecked to pieces by a band of wild ibis picking their way gently through the human debris. Rusty is not a fan of pastry, breads or pizza crusts (I know this from dinners we have shared when Layne was out of town) so he ignored the bread in a way that Cheyenne would never have done. 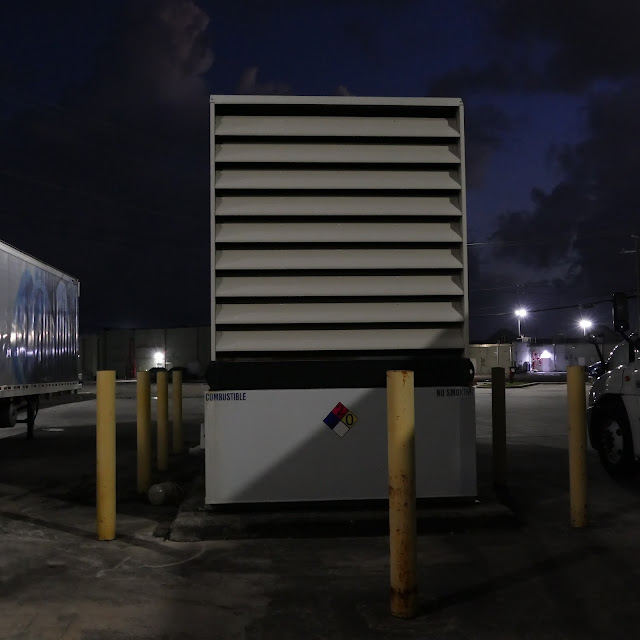 Above you see a massive generator which at this stage it seems, maybe,  just possibly we will not need this hurricane season. Hurrah! However it is a massive Diesel engine sitting on 3600 liters or gallons of fuel in the tank below. The idea is to give the motor a few feet of clearance in the event of flooding and enough fuel to run a few days to allow time for service to be restored. If you look around you'll see generators everywhere ready to keep facilities and hotels and stuff running when catastrophe strikes. We had a great summer this year as the rest of the country burned flooded  and blew down. But not every year is so lucky. 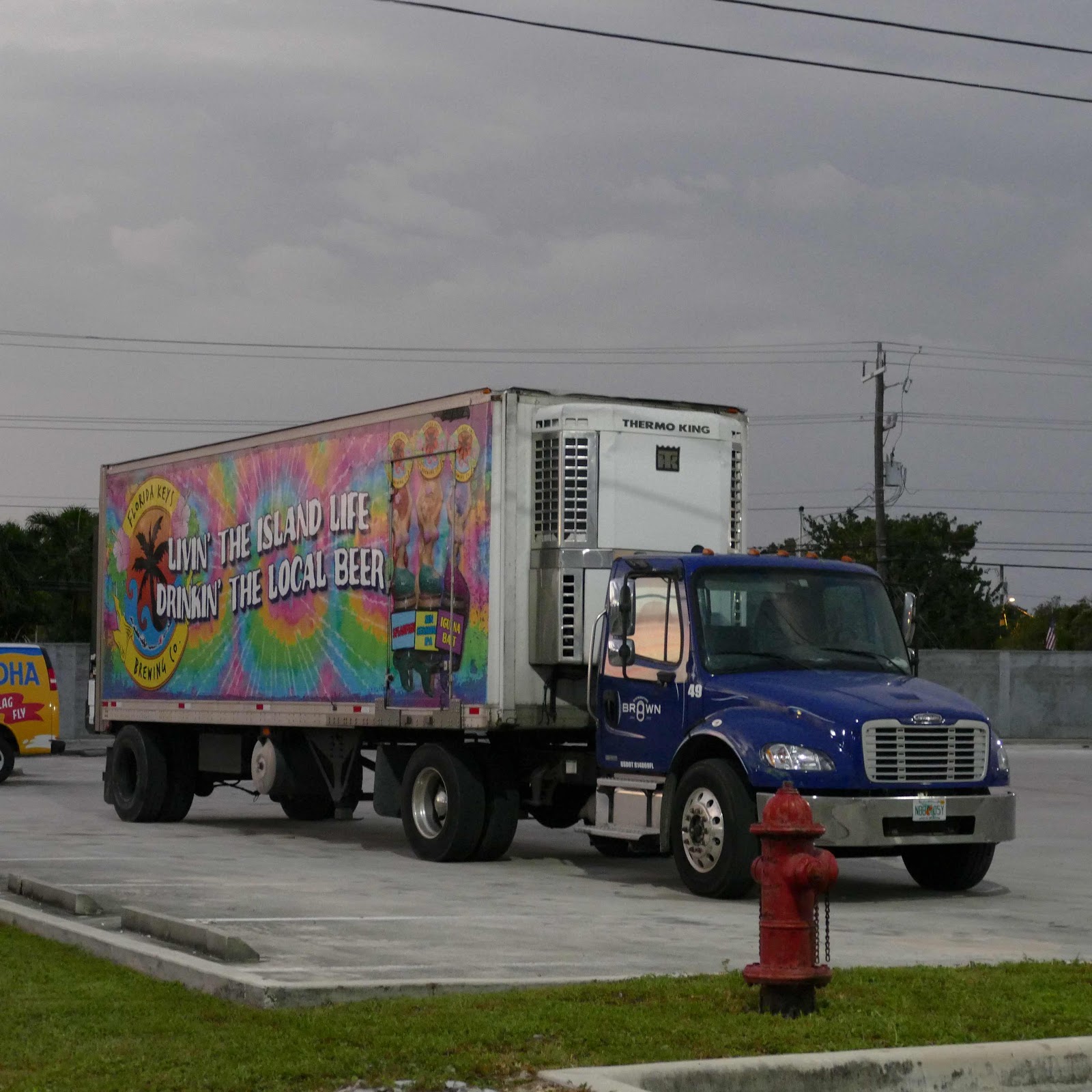 Living the Island Life and drinking the Local Beer. That slogan cracks me up every time I walk by. God knows what qualifies as local in the slogan.Years ago Baby's Coffee used to roast coffee on Duval Street. I know that notion sounds totally bizarre these days when Duval Street is good for chain stores and stuff you can't actually use but it's true. They moved out of town a while ago and sent their roasting machinery to the mainland.  It's the way it goes around here with the cost of land what it is. I am actually surprised you can distill liquor downtown and make a go of it. 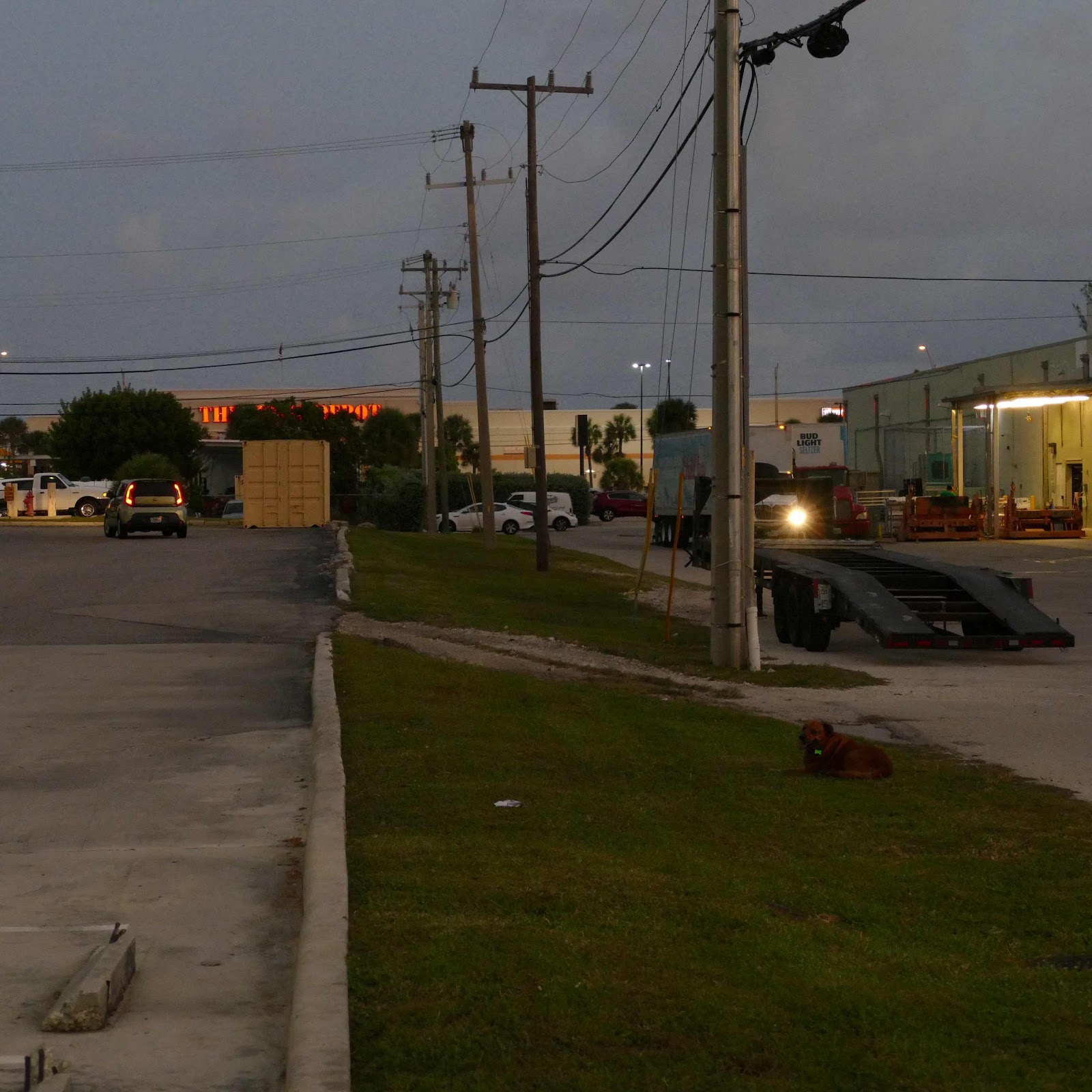 Rusty enjoys sitting and watching and I have a suspicion he will love the opportunities to sit outside the van and watch. He does that every time we take a trip, anxiously pawing to get out and if I have parked us correctly he will find an island of grass or shade to sit in nearby and watch. 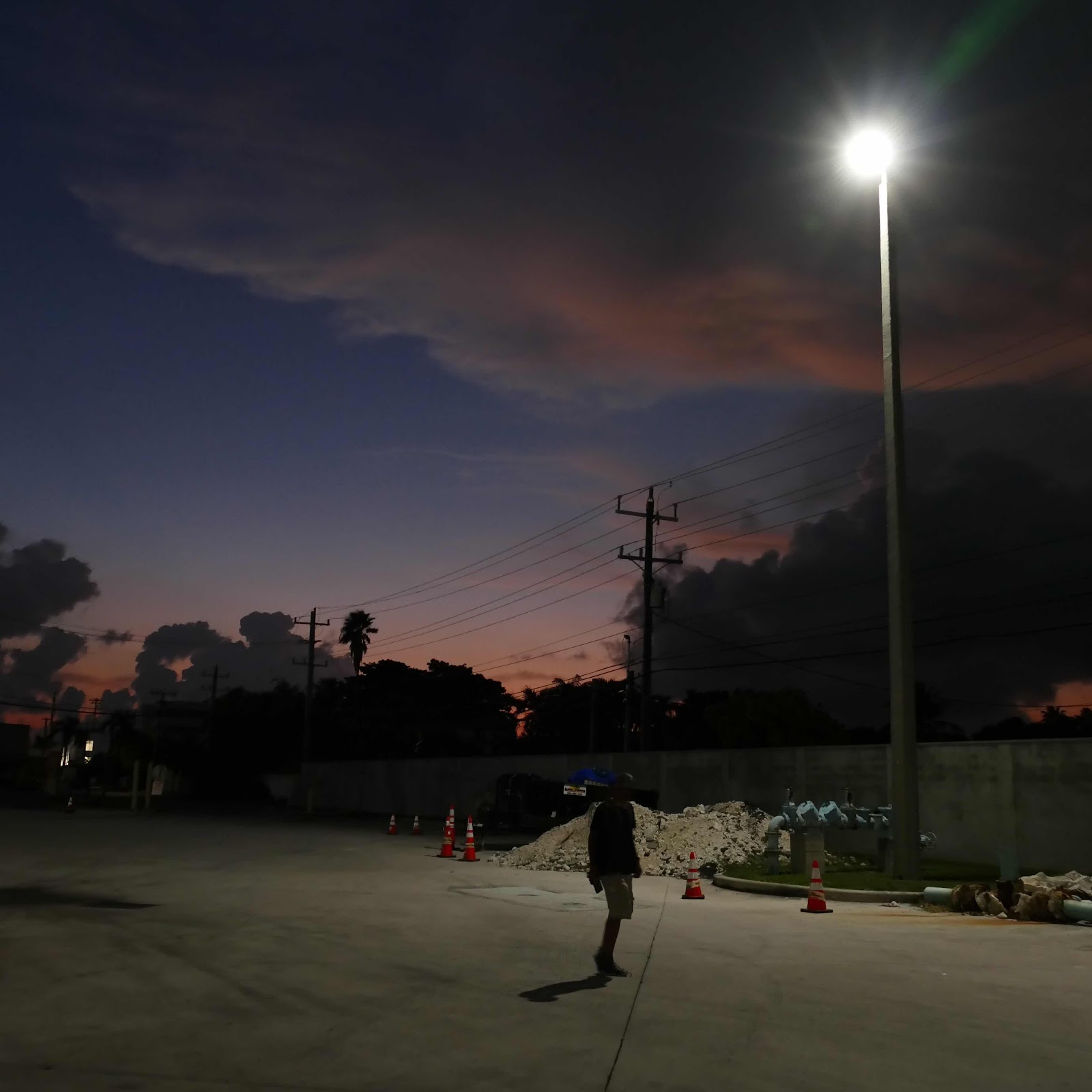 When we arrived there was a man sitting in a white car and he started to get out until he saw Rusty who trotted past ignoring him completely.  It was obvious even to him Rusty wasn't interested so he got out and walked away. What cracked me up was when I said "Good morning" he said nothing for a moment and then managed to gasp a low key reply while holding his breath. Clearly his  joint was medicinal but I was just fine with him being parked while I drove away. 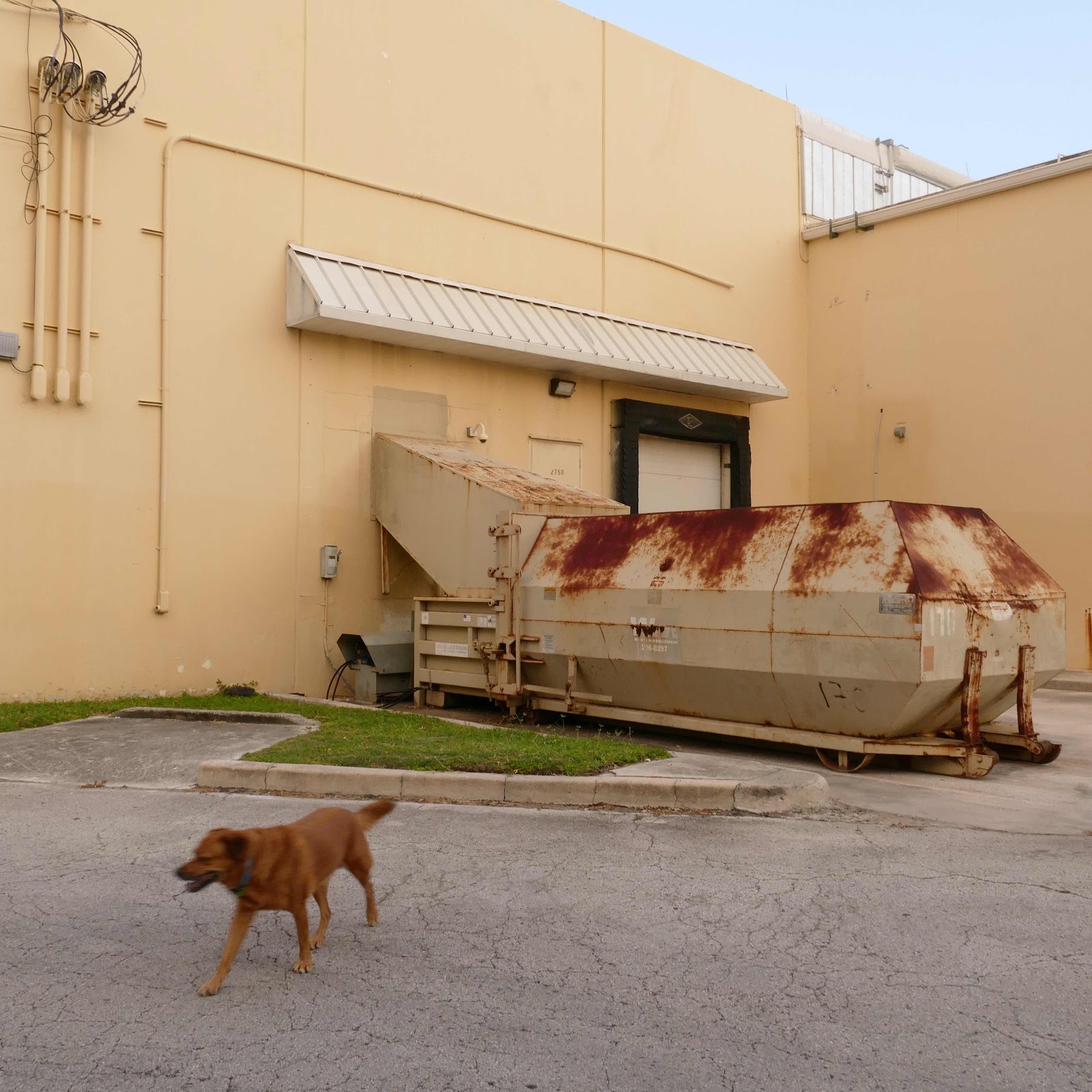 Mask, check, phone with credit card check, shopping bags check, windows open for Himself check. I went shopping and Rusty, exhausted by his endeavors sat in the back of the car and did his favorite thing: watched the world go by. Tough life. 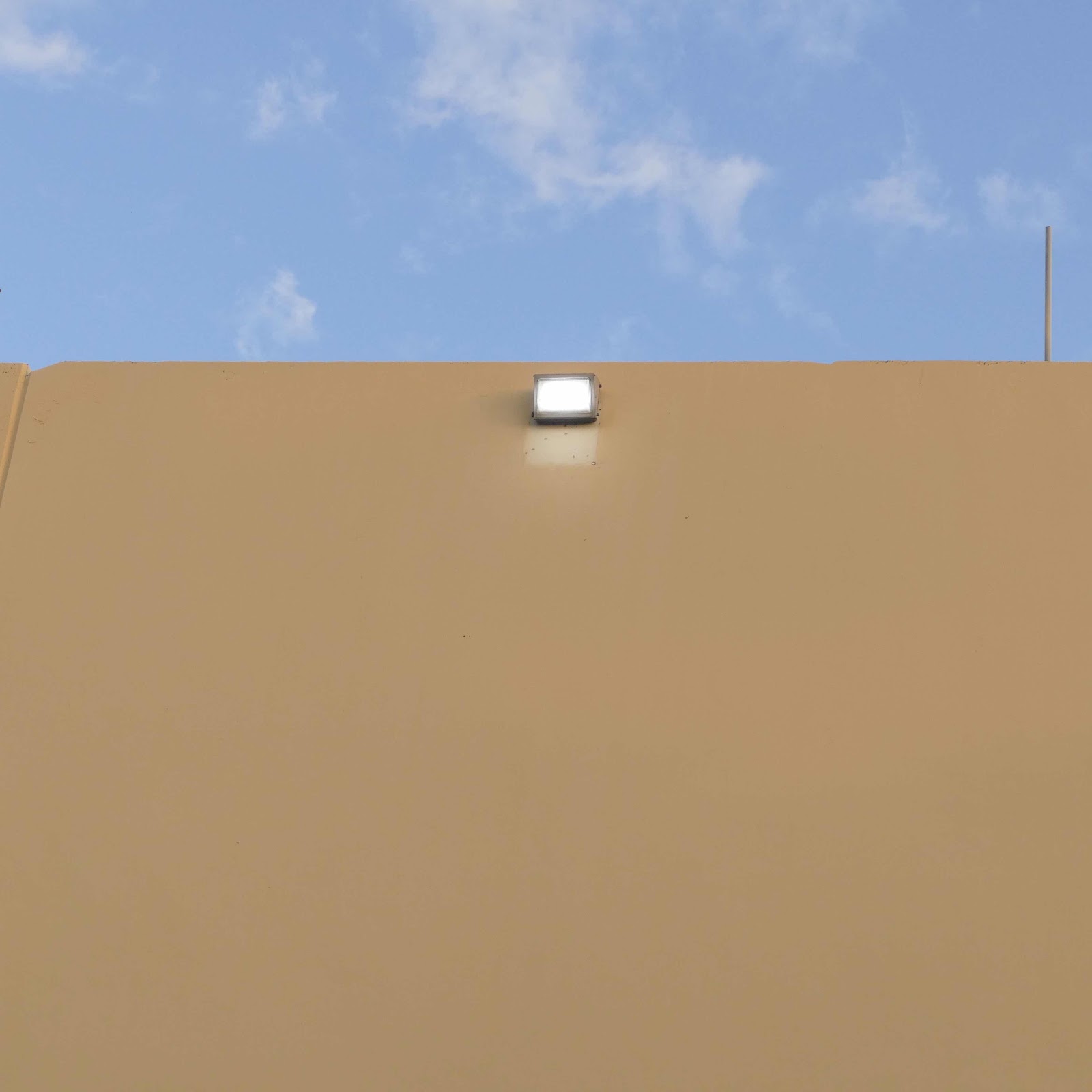