From The Archives: Boca Grande

Robert's Dad has since died, but I remember him fondly, a man with a twinkle in his eye and a sharp sense of history and humor. I like seeing him alive and perky again even if its just on this little page. It was a good  day on the water, now so long ago, five years, a reminder that time really does fly as you age. I'd like to do it again when my boat works! Tiresome boats!

This is the best time of year to be in Key West in my opinion, because this is the time of year one goes swimming. Dolly and Robert invited us out for a picnic at Boca Grande Key, about seven miles west of key West. It was a massive organizational effort by Dolly as Boca Grande is entirely deserted, and we are Americans,, thus want for nothing even in Nature's most remote spots: 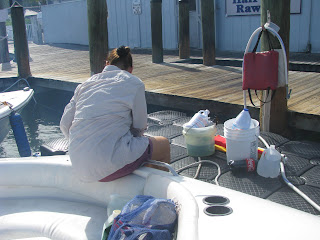 There are a few small scraps of land that are more than just mangroves scattered around Key West, places that are naturally sandy and superbly isolated. Boca Grande is on the way to the Marquesas Keys, and ultimately the Dry Tortugas. The beach at Boca Grande is the farthest west of the string of small mangrove islands known locally as "The Lakes" a broad basin of shallow water surrounded by islands. On this chart Key West is off the screen to the right and the Dry Tortugas to the left: 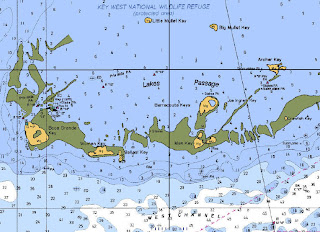 Because we all live in the Lower Keys it was easier to simply rent a boat off the docks behind the Half Shell Raw Bar (305-295-BOAT if you feel inspired) than to drive our own skiffs 25 miles just to get to Key West. The docks were looking good as we pulled away: 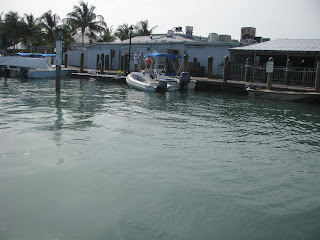 We also had an honored guest on board, Robert's 84 year old father, a man who loves to take cruise ships in retirement and who has been all over the world as a result. However he was rather apprehensive about a small boat trip to a deserted beach as he has several artificial joints which make him vulnerable to falls. The rental boat was a much more comfortable craft than our crude skiffs for him to make the journey: 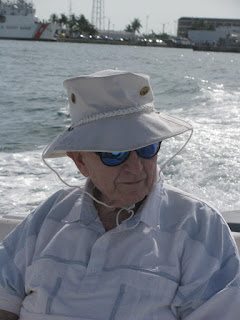 Robert senior is also prone to getting melanoma, "My Norwegian skin!" he lamented, so he had to stay covered up and in the shade at all times. The logistics of this trip were remarkable, and Robert and Dolly pulled it off as we shall see...Robert enjoys sharing his knowledge of the water and the wildlife and we took a pause in the middle of The Lakes so his father, a massively curious man, could catch up: 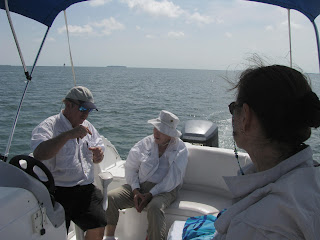 The ride to Boca Grande took about forty minutes at the rental boat's relaxed pace, and soon enough we could see the thin sliver of sand, the full moon high tide was busy dropping even as we arrived and there was a tremendous current off the beach. 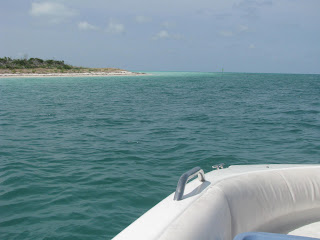 We had our choice of location and Robert beached the boat whereupon we unloaded a mound of gear that soon transformed itself into an awning, chairs, ice chests, a Weber grill and so on and so forth. The awning was superb as there was a light southwesterly wind and in the shade we found ourselves to be refrigerated to a perfect temperature, and the lack of fresh water meant there were no bugs either: 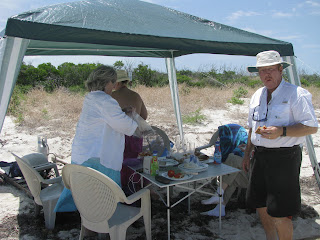 We weren't alone but there was lots of room for all: 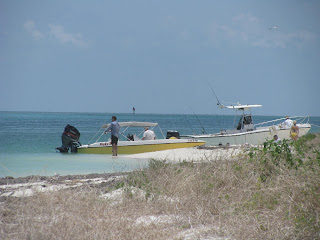 And I have to say we had to be the best equipped group on the beach, with the grill turning out hot cheese sandwiches, with my wife's Greek salad for garnish: 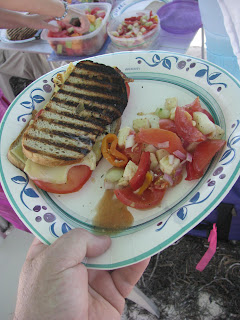 And Robert is no slouch when it comes to enjoying the fruits of his own labor (he grills pretty much at the drop of a hat): 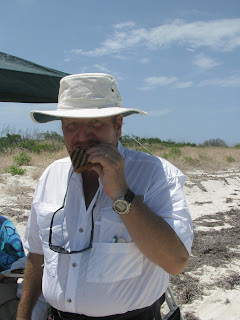 And when I said well equipped I meant it. Dolly and Robert have this excellent ice cream churn. They found it at a yard sale and they use it from time to time and it never ceases to amaze me. It consists of a double walled bucket that gets frozen ahead of time and then one adds a mixture of one's choosing, in this case cream and eggs and milk I believe with some Ghirardelli chocolate, and then hey presto! with just a little churning out comes delicious ice cream, a full quart of the stuff: 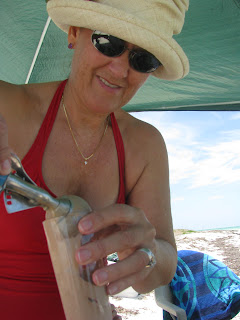 And there we sat, in the shade, fanned by the breeze, hogging homemade chocolate ice cream. 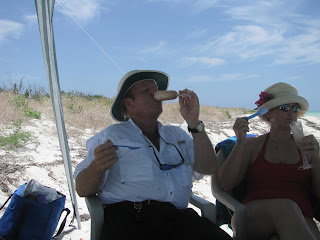 One has to pity the poor plebs who came less equipped... 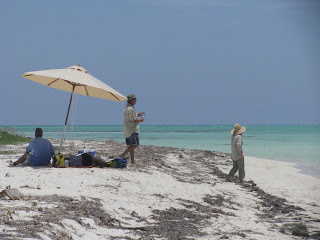 Though they seemed to having fun too, I have to say. It really doesn't take much to luxuriate in this deserted places, all sun sand and sea, just like the travel brochures tell us. Robert senior got into too, he marveled at the ease of the picnic and his pleasure was obvious. We youngsters took to the water, drifting past our campsite in the rushing tidal waters, stepping onto the beach further down and walking back upstream to do it again: 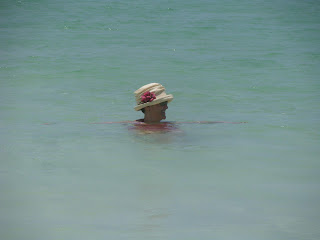 It was like a water park. Even though it hardly resembles it at all, this is in fact real life and we found time's winged chariot rushing us along and soon enough we had to stop this sybaritic playfulness and pack the boat for the return trip: 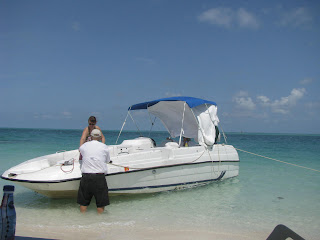 We got Robert Senior safely ensconced in the shade and off we went: 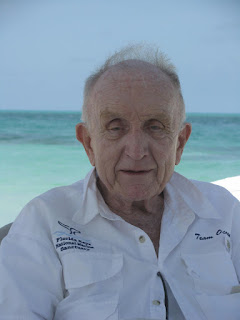 Robert's Dad carries his 84 years very well, but his mind is extra sharp and he exemplifies the notion that a sense of curiosity will keep you youthful. He engaged me in extended conversations about politics the economy and religion in a way that was non confrontational and engaging but also open to other points of view. I felt more like I was in a Greek taverna a couple of thousand years ago engaged in Socratic dialogue than being a bum on a Key West beach. He spent his working years as a financial adviser in Manhattan, and he had some choice remarks to make about the modern ethics of the trade. A confirmed Republican he voted for President Obama and thinks he's doing the best he can in an impossible situation. A religious skeptic, or a pragmatist as he put it, he faces old age with equanimity and a twinkle in his eye. He made the picnic for me, and I was as apprehensive about meeting him as he was about riding the small boat. I've known his son for twenty years and the old man's approval seemed important. He called me a philosopher and slapped his knee with delight whether we found a point in common or in opposition.


The return trip was the usual sedated ride back to base, everyone filled with food and sun and exhausted by water exercises: 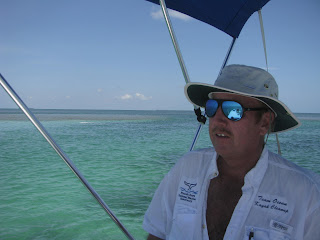 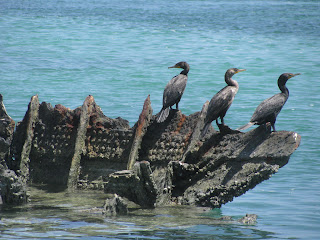 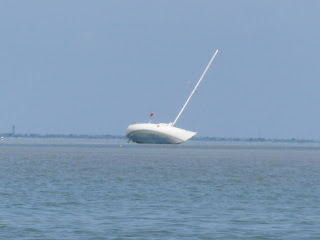 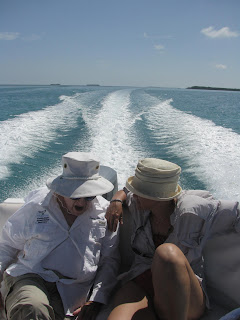 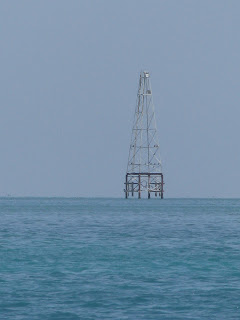 We stopped by Robert's workplace at the national Marine sanctuary offices on Truman Waterfront and I got to snap a picture of the USS Mohawk still decorated for the Fourth of July, a reminder of my tour aboard last winter: 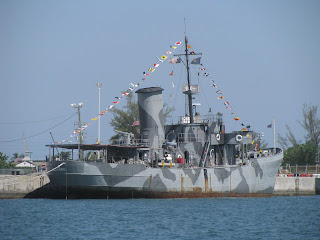 And in closing the view of the Key West waterfront as one crosses the harbor: 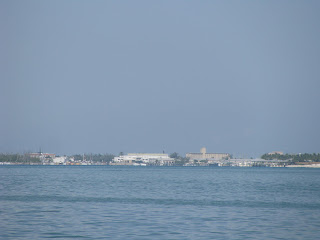 So, remind me, why is it people flock to Key West in winter, when the waters are cold and the seas are rough? Long may they continue to do so, I'll take summer over winter any day.
Posted by Conchscooter at 12:01 AM 14 comments: