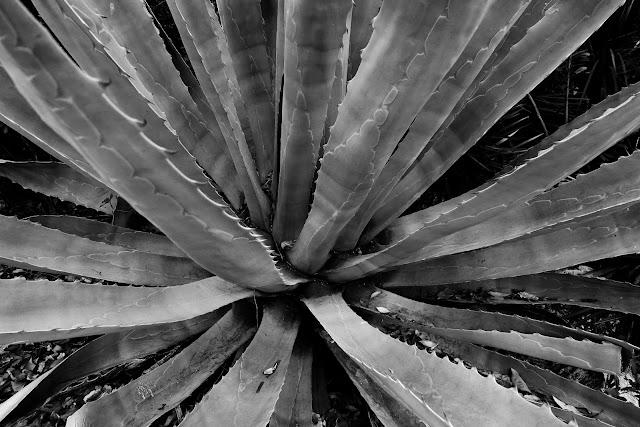 This place is  so odd to me,  a pleasant isolated home with a guest house, harbor and tennis courts listed a few years ago for ten million dollars. And so buttoned up it looks more like a prison than a luxury home. 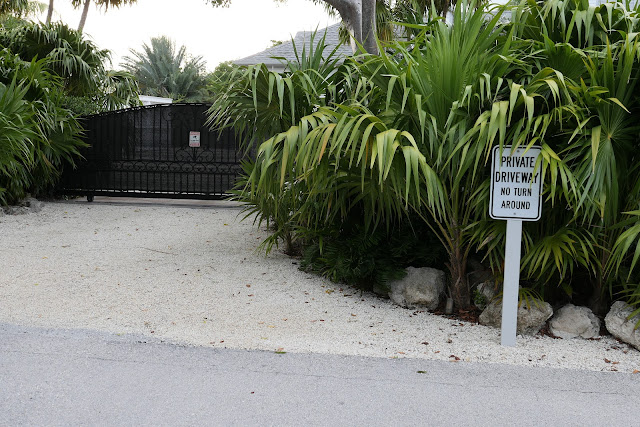 Hurricane Irma wasn't kind but constant work by people with very little English, friendly enough and cheerful to the passing dog walker who spoke Spanish, and very hard working, has brought back the vegetation and fences and and lots of signs. And rocks.  I feel like I'm walking past one of those places on the highway that advise not to pick up hitchhikers. 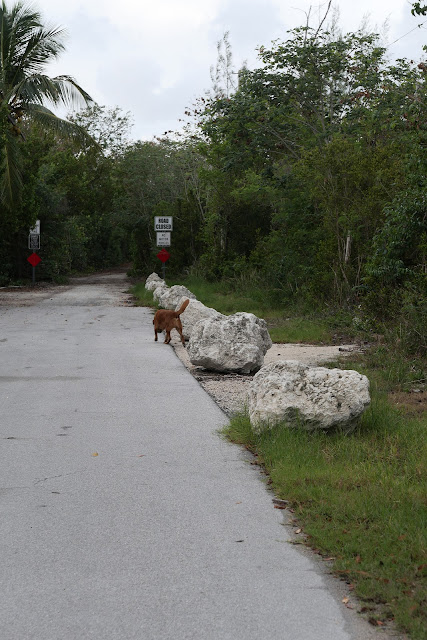 The Old State Road 939 heads south from the Overseas Highway, passes the KOA which is finally being rebuilt and dead ends in a gate put across the old road by the wildlife people. You can walk it but not drive it. Its about two miles long and ends in the Sugarloaf Creek, a tidal waterway where the road bridge has been taken down. 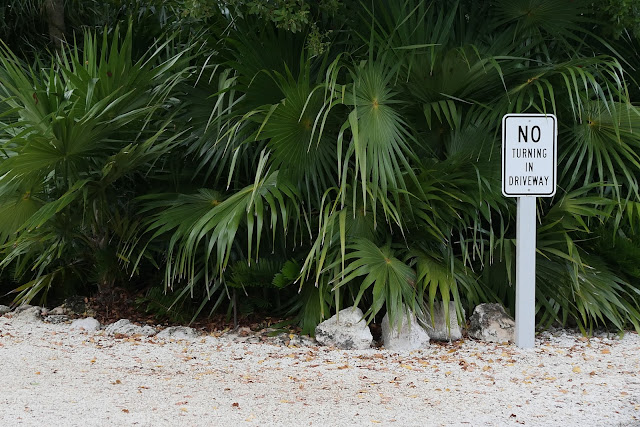 This business of no turn arounds is a positive obsession for these relative newcomers. I come here to walk Rusty so I park close the campground and come down on foot, but others are exploring and find themselves stuck in a  dead end. And they confront these signs: 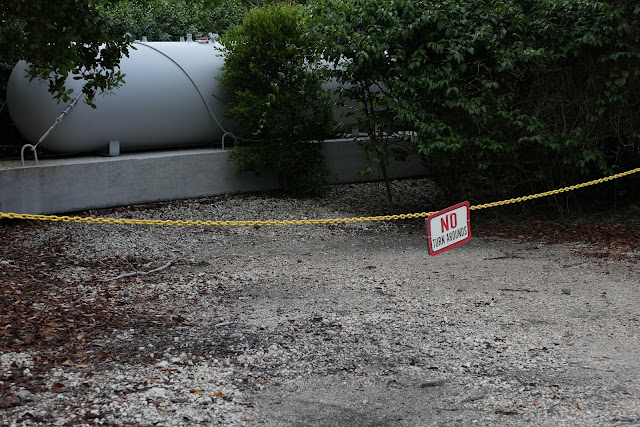 The gate closing the road is out of sight about a quarter of a mile down the road and there is a small turn around there but if you arrive here the owner of the manse is determined you will back the other half mile to get back to the KOA entrance where you can turn around without backing into the bushes (as I do) beyond the Lord of the Manor's irritated reach. 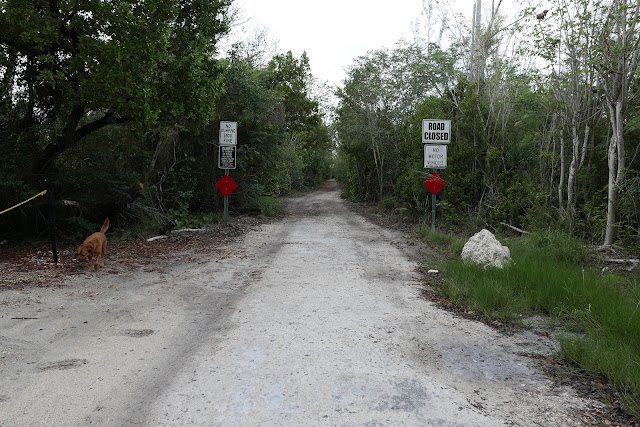 I rode my Bonneville down the old state road a good few years ago, in 2007  more precisely: 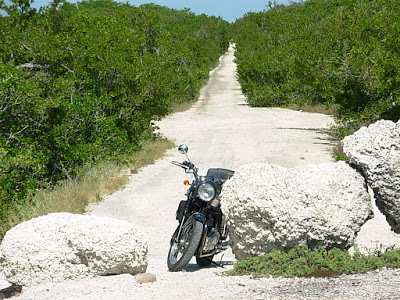 and I enjoy walking down to the saltwater creek from time to time. But it is decidedly a one track lane nowadays and once in, you are committed. Especially as not many people seemed to be trained in the art of the three point turn. 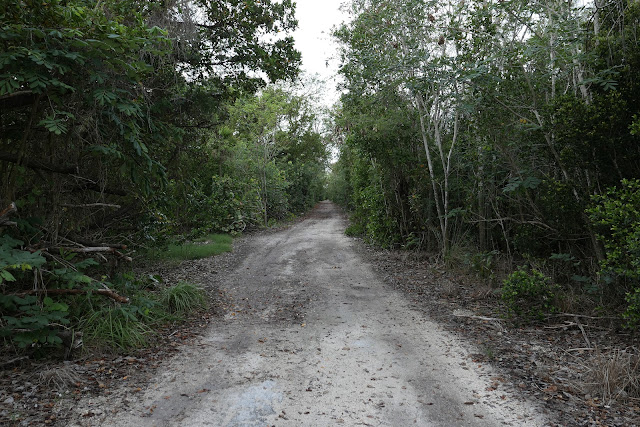 I noticed all the signage because it has sprouted up suddenly from people who don't really seem to have set up a winter home in laid-back-land with the intention of relaxing into the ambiance. Furthermore this sort of face on the world is emblematic of the changes that have been spooling up around here. You used to have to go to the mainland to see this lining A1A up the coast. 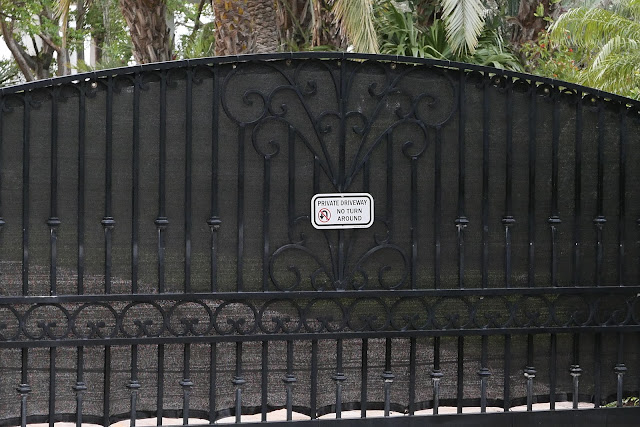 I don't suppose it's illegal nor do I care. The lady of the manse once caught me photographing a succulent and drove up in a cream colored Mercedes convertible and imperiously demanded to know what I was doing to her mailbox. Nothing I said. She glared at me. I said you really don't have much to fear in the Keys compared to where you are from, most people try to get along fairly peaceably. Then I was naughty. I told her I was relaxing after a day working 911 at the POLICE STATION and realization dawned that I was an instrument of her class and therefore on her side and she couldn't have been nicer. I was slightly revolted. The barricades don't make me feel any better. 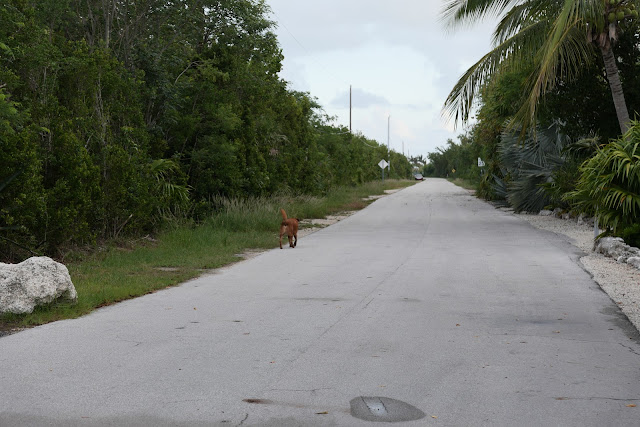 It's not to my taste this style of hiding behind moats. I was born into the landowning classes and ran away as soon as I could when I realized I could not do my duty. Now I am a serf and I enjoy not being responsible for anything but myself and the possessions on my back (in my van). I see all this anxiety and wonder at the stress. So what if someone turns around in your driveway? You can turn around in mine on John Avery Lane as often as you want between now and April. When I leave we'll hand the landlord the keys, I think my wife knows where they are, and off we shall putt. To me that is freedom, not worrying about who is backing into your driveway. 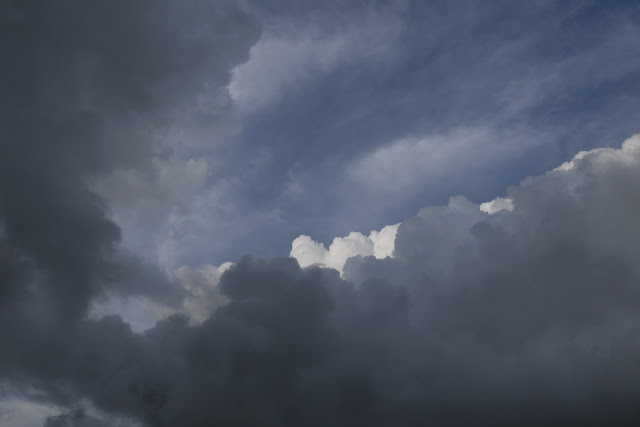