They are proud of a saying attributed to King Henry the Eighth, who reputedly announced that in his opinion hops are a  wicked and pernicious weed destined to ruin beer. Frankly I'm not completely sure I disagree with him. My glass of Lil Heresy brown ale at the Wicked Weed was not as sweet and as smooth as I  might like though it was entirely drinkable and at less than 6% alcohol it was quite the wussy beer on offer. 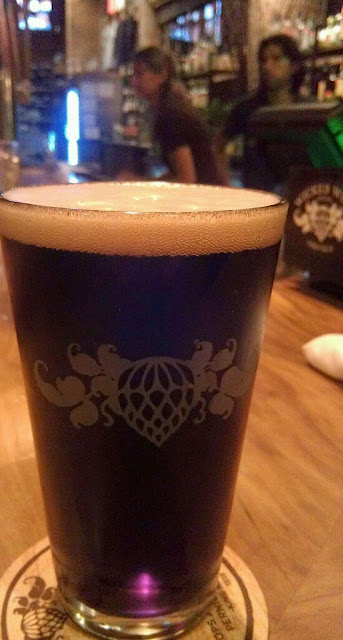 This place opened last Fall and became an instant success according to my nephew Jacob, an Asheville native immensely proud of his city and its growing reputation as a home to craft beer. "We are the east coast rivals to Portland Oregon," he said with a smile as we pushed our way into the huge brick warehouse dominated by a portrait of the old hops hater himself. 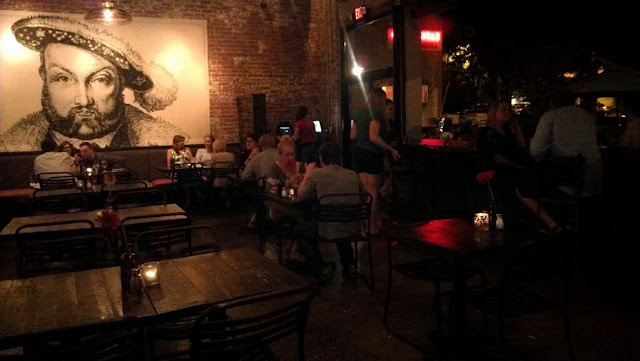 Jacob prides himself on being able to take down a Freak Double IPA and a triple IPA was also on offer that night. I am not a fan of India Pale Ales as brewed in the US  this century. originally they were brewed to be exported to India from England in sailing ships to supply the white rulers in the colonies. However nowadays when there is no need to protect from spoilage  brewers seem to feel the need to create beer from battery acid. I am no great fan of "Super Tuscan" gut rot wines, nor of Starbucks's brand of battery acid black coffee nor yet do I enjoy bitter beer. I seek solace in wine coffee and beer and I enjoy smooth sweet flavors. That said the double IPA really wasn't as bitter as some I have tasted.﻿ 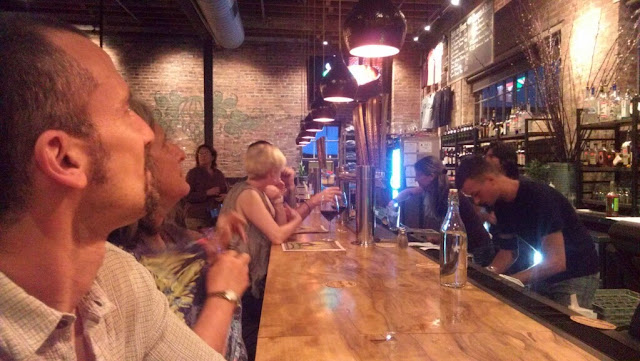 Downstairs you can sample beer from barrels, Wicked Weed Barrel beers which sounds like fun and watch the brewing process, but we had plenty to deal with upstairs at the bar sampling Wicked Weed Beers. 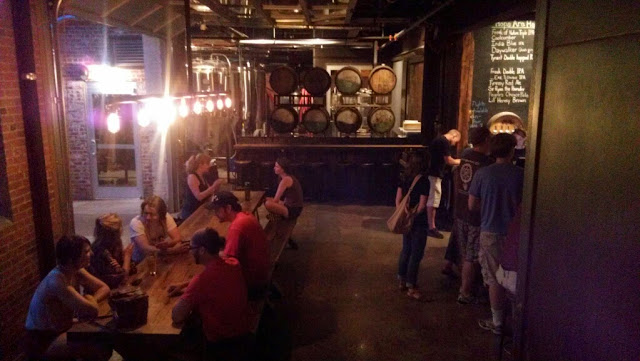 Jacob told me it was the very strength of those beers that attracted patrons and when word go out the lines to get a seat in the bar were up to an hour long. In winter. I cannot imagine that. 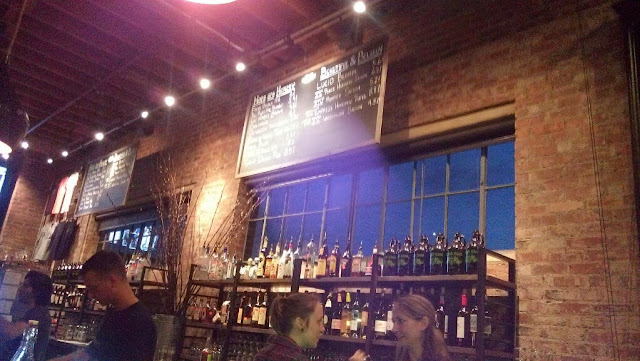 The list is massive as you can see and the bar tenders are quite willing to let you taste before buying and you can also get beers in ten ounce sizes as well as the more usual 16 ounce pints. I was quite tempted by the Cucumber beer and I saw a lot of them being sold, but I wanted to try something stronger and went with the brown ale. 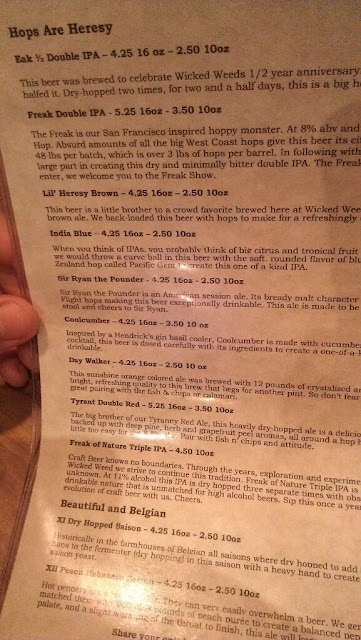 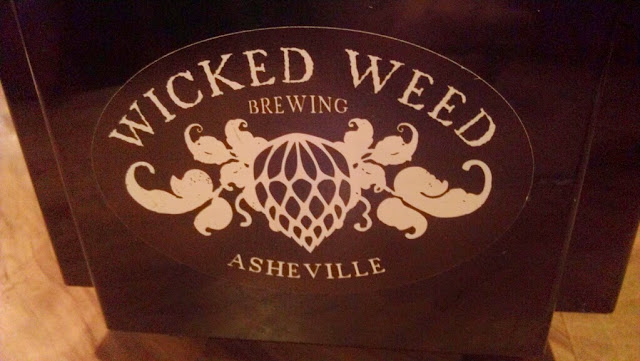 Jacob had brought his young family home early from a Fourth of July camping trip, thanks to the insistent downpour that washed everything out the first week of July. Bad for them, good for me as we got to hang out and even the brats were silenced by fried tilapia fish tacos prepared by their mother, Jacob's wife Bevin. Consequently we had no room to try any of the food that is reputed to be quite good. 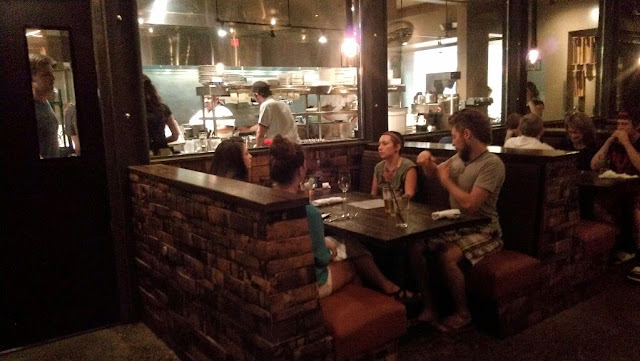 I'm not sure my photographs do a very good job of showing how busy the bar was on a weeknight before the  holiday. It was hopping. 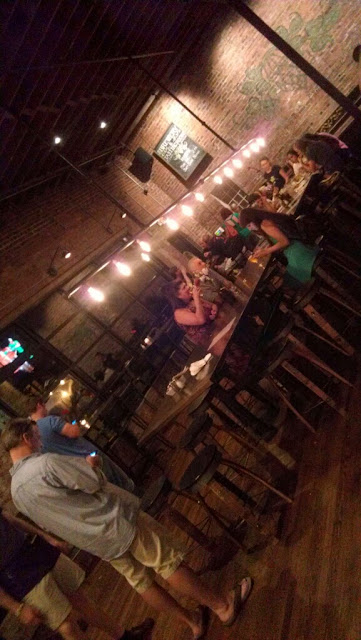 I guess I'm a bit of an old  fart because this place is quite the magnet for youngsters. I liked how people were out having a good time without having o get roaring or falling down drunk. 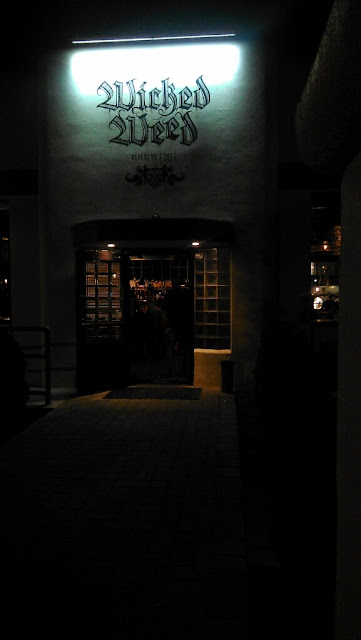 They were enjoying their beer, as strong as it might have been, and enjoying a warm night out. I won't envy them come December but it was a nice place to be in July in between biblical downpours. 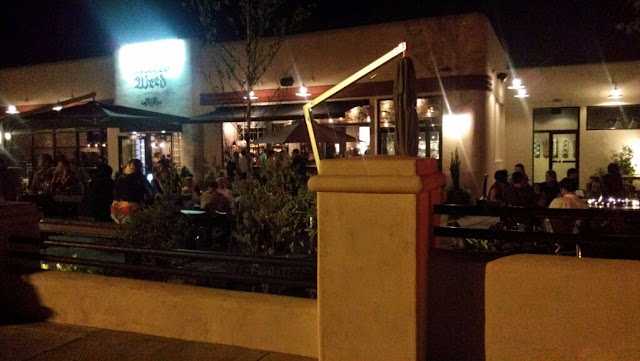 It made me quite nostalgic for Key West's own modest little Porch, and it also made me hopeful for the new brew pub that is supposed to be completed later this year at the old Waterfront market. Perhaps hops aren't so diabolical after all.
Posted by Conchscooter at 12:00 AM 2 comments: