I try not to forget how dramatic my commute is, just a couple of feet above the ocean, but from time to time I do wish people could pick up the pace. Even now in June when the winter slow pokes are long gone we find ourselves trundling along ten or more miles an hour under the limit/ It's tough when you are living to a schedule but you can see why visitors tend to look around and slow down. 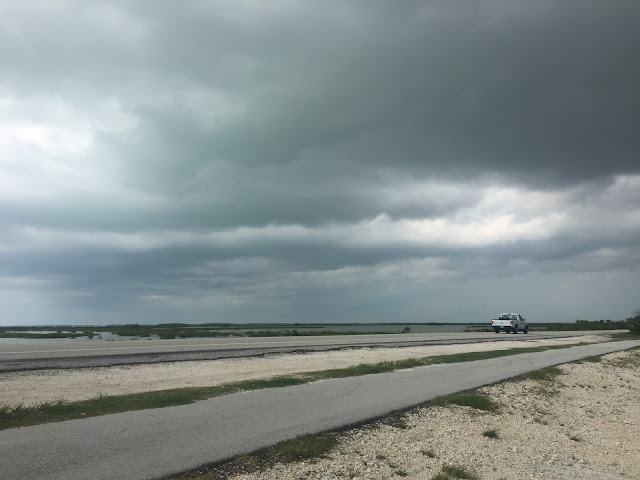 I got this next image from the Internet because it reminded me distracted drivers are also well in evidence on the Overseas Highway and where in the past I thought weaving meant drunk nowadays it could but it could also mean reading the phone. So when I spotted a couple of these motorcycle killers I decided yesterday was he day to slow own and pull myself and my Suzuki aside from the flow. 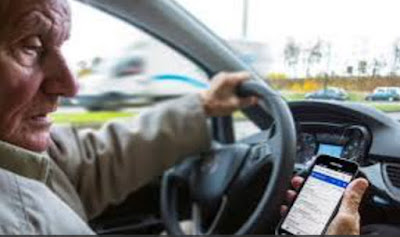 There are things you will see on your commute, things that flash by, work day after work day and you never take the time to stop and investigate, so after one too many slow pokes, one too many near misses from a distracted driver I decided yesterday, returning home from my exercise class, I would do just that: investigate. This marker has caught my attention over the years and it turns out it was an NFL player riding his bicycle in 2014 who was struck and killed instantly by an apparently distracted driver who claimed he didn't notice he'd killed a man: 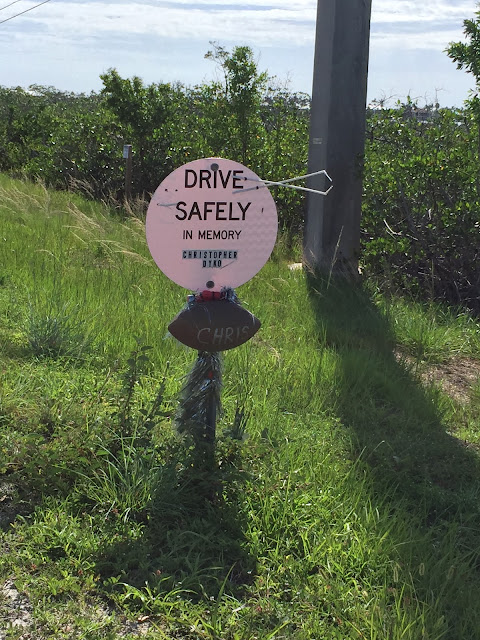 From the Miami Herald Florida Keys Bureau:
A judge Wednesday spared from prison the 89-year-old Sugarloaf Key man who struck and killed former NFL player Christopher Dyko on U.S. 1 in 2014 and then drove away.
Domingo Javier Veloso, 89, wasn’t charged with striking the bicyclist but for leaving the scene of a fatal crash after his car entered the bike lane near mile marker 16 on Dec. 28, 2014.
“If he hadn’t have left the scene, there would have been no issues,” said Assistant State Attorney Christine Poist, who worked the case with prosecutor Jon Byrne.
Judge Wayne Miller no Wednesday sentenced Veloso to one year of house arrest followed by nine years of probation, a $5,000 fine plus the cost of the investigation by State Attorney Catherine Vogel’s office and the Florida Highway Patrol.
Veloso returned about 2.5 hours later with his wife, telling police he was the driver and that he had no idea he had struck a person.
Prosecutors didn’t ask for the 4-year mandatory prison sentence that goes with Veloso’s crime to but wanted some county jail time for the elderly man.
Miller handed Veloso a 364-day jail sentence but suspended it.
Veloso’s driver’s license, which was medically revoked by the state after the fatality, was also suspended for 10 years by the judge.
Dyko, 48, of Bremerton, Wash., who played with the Chicago Bears briefly in the 1980s after a standout career as an offensive tackle for Washington State University, was killed instantly, police said.
His family sent letters to the court but didn’t make the long trip to the Key West courthouse for Wednesday’s hearing.
Dyko was in the Keys to ride with a bicycle tour group and was headed back to meet up with some of them when he was struck, reports stated. 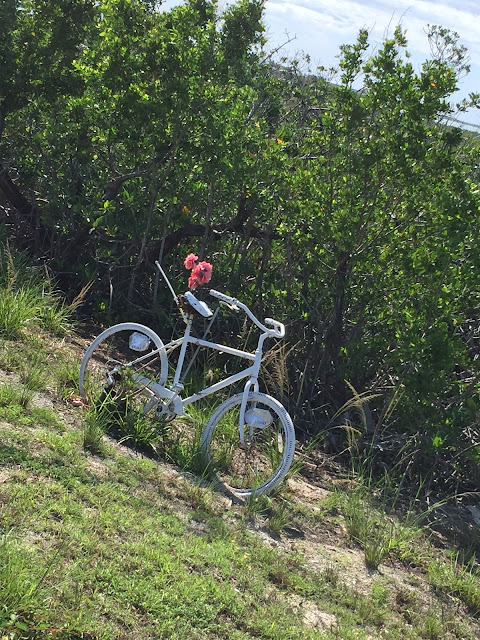 A little  further along I pulled aside again, this time at the Sugarloaf Lodge. There was a note on Facebook not so long ago about the return of the sign after Hurricane Irma tore it all down: 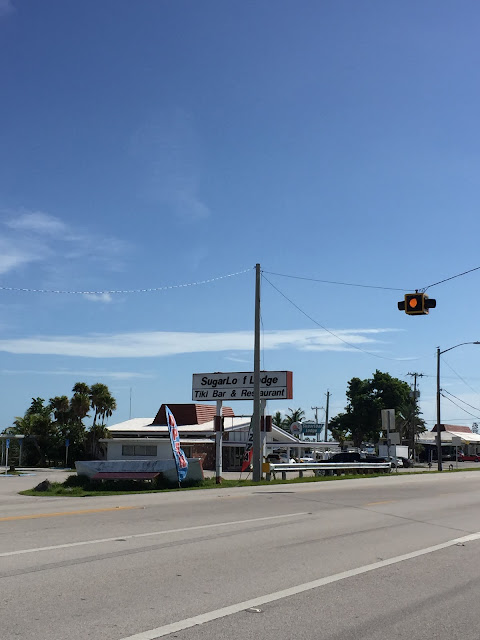 In point of fact the roof of the sign is still on the ground. It used to look like this: 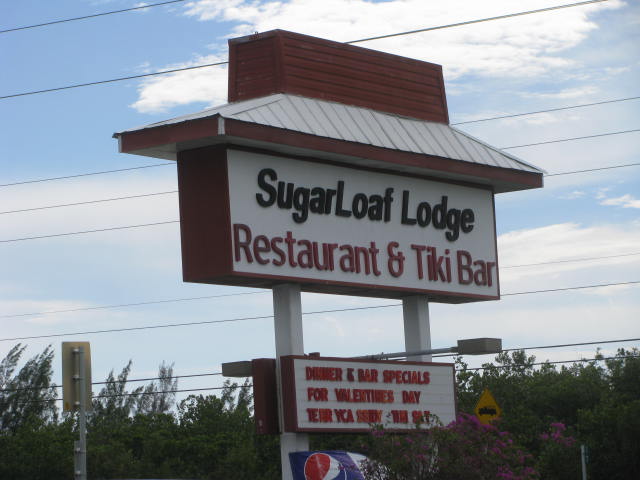 And then there is the bicycle bridge to nowhere opposite Sugarloaf School. I sopped there too and pulled off the roadway. They ran out of money after they built the bridge, but there is supposed to be a  full bike path along Sugarloaf one day. As we have seen its needed to keep cyclists out of traffic. 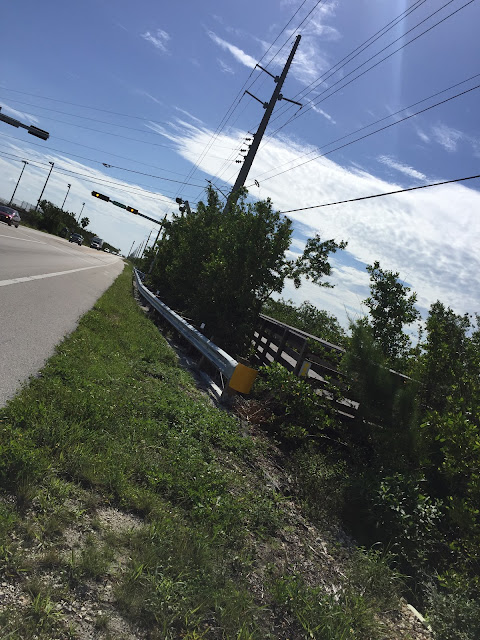 On the opposite side of the highway is this absurd For Sale sign. It looks real but all there is behind it is mangroves to the horizon interspersed with water. It's like a classic Florida case of someone selling real estate made up mostly of water. Utterly weird. 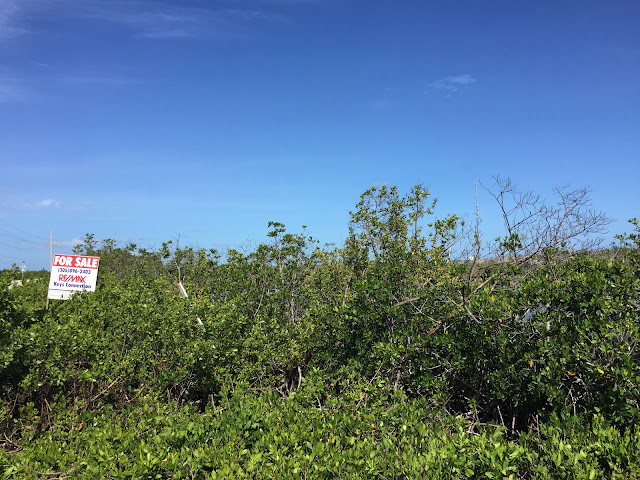 At Mile Marker 20 there is a bus shelter which is no unusual thing, they have put them all along the highway for many of the stops between Key West and Marathon. The odd thing about this one, and I see it almost every day is the advertising. The  campground has been closed for major repairs and renovation since Hurricane Irma and yet the advertising is in place as though nothing happened. The Category Four hurricane came ashore just up the road from here... 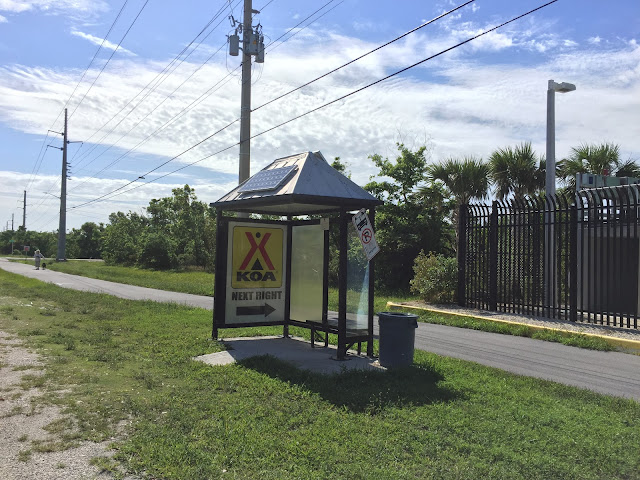 It is an odd stretch of roadway is US 1. Like I said at the beginning there are all sorts of reasons to slow down and look around. At least I've finally taken the time to satisfy my curiosity about some of them. 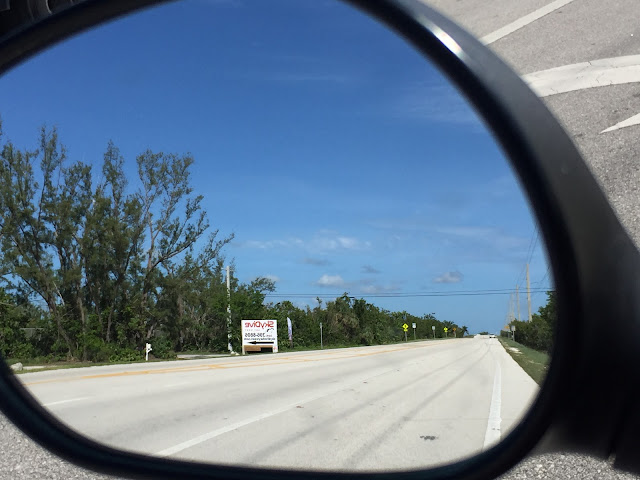 Another view of that sign above in the scooter mirror, pre-hurricane: 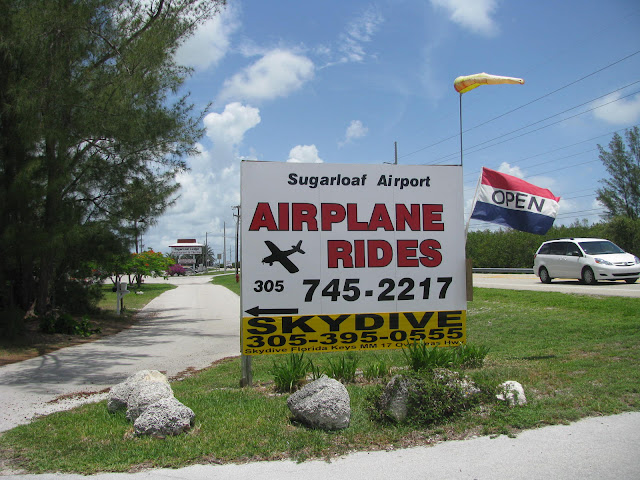 Much better by night, is the Overseas Highway, much more peaceful. 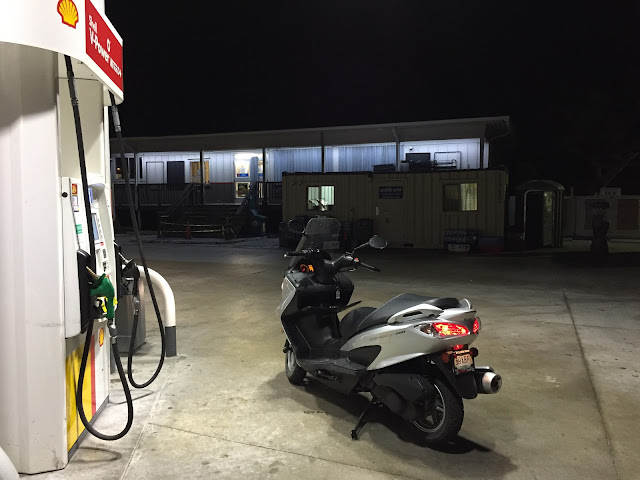