I fear she is aging just a bit, finding it harder to get in the car, apprehensive about climbing the stairs after a long hot walk. Perhaps I allow her years to influence my perception. 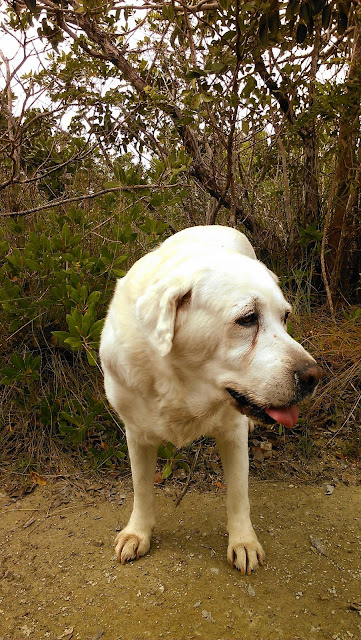 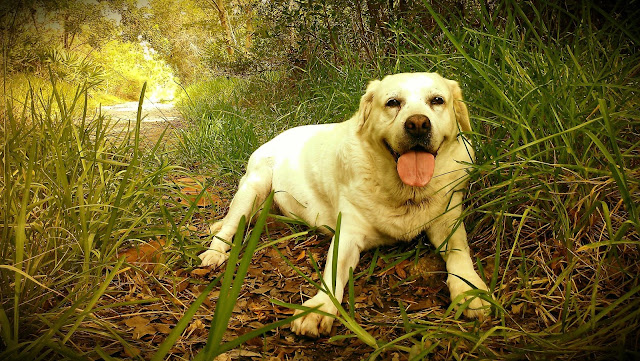 Posted by Conchscooter at 8:38 PM 2 comments: 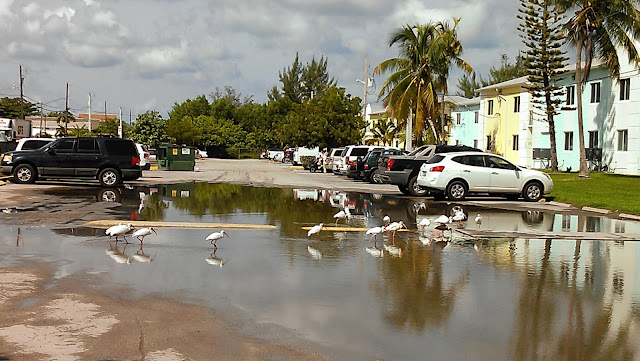 Posted by Conchscooter at 2:30 PM No comments:

Among certain classes of managers working the night shift is viewed as punishment. Frequently the break up of marriages follows on, people say, from too many years being awake and working while most sane people sleep. Sanity I say, is over rated. I love working nights, my marriage seems solid. I get an hour lunch in each twelve hour shift, so sometimes I wander out into the darkness and set a course fro some corner of the city I want to explore. Other nights I unfold the hurricane cot and I take a nap in a dark silent storeroom.
Walking Duval at half pasty three in the morning can be a good hour on an average weeknight, as the bars must close by four but frequently like Willie T's here, they sometimes close earlier. I stopped by to take a picture of the after hours pause and the bar tender came over and we chatted. He recognized my voice from the police dispatch center and we talked about life on the front lines of Key West business irritations. " They stand there right where you are," he said talking about the street people who had been bothering customers that evening, "and they reach over the rails and bum fries and cigarettes and even ask for money from customers sitting here." I shook my head. I don't know how bar people keep their sanity in this crazy, ill mannered town. I like working two miles away behind two locked doors. 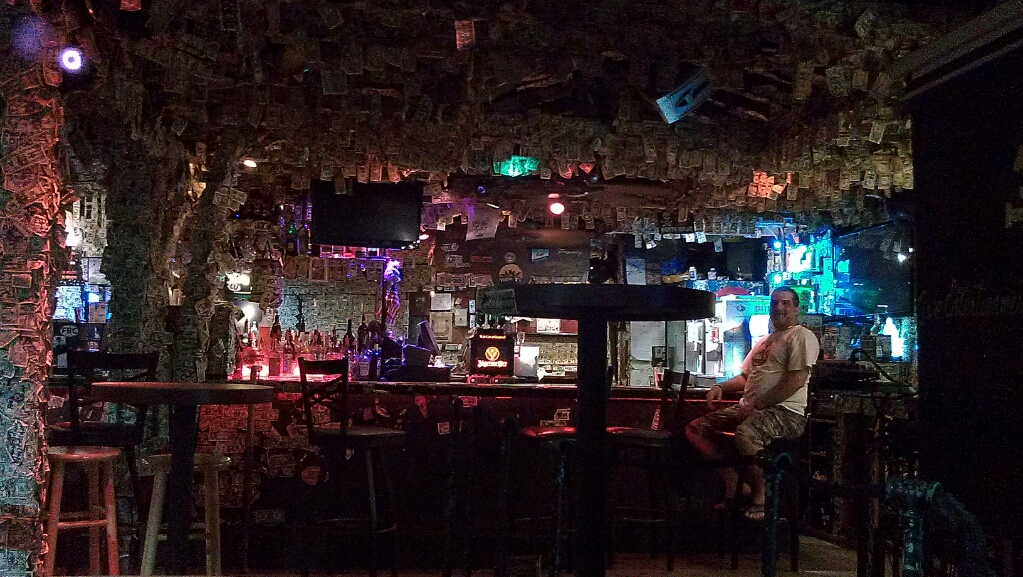 There is a certain serenity on Duval in the early hours of the morning. This main drag is the hub of tourist activity, the most famous street in Key West (named for Florida's first territorial Governor), and by day its the busiest place in town. By night it can be busy too, but by early morning after the revelers leave and before the street sweepers arrive, its a desert. A well lighted, colorful desert. 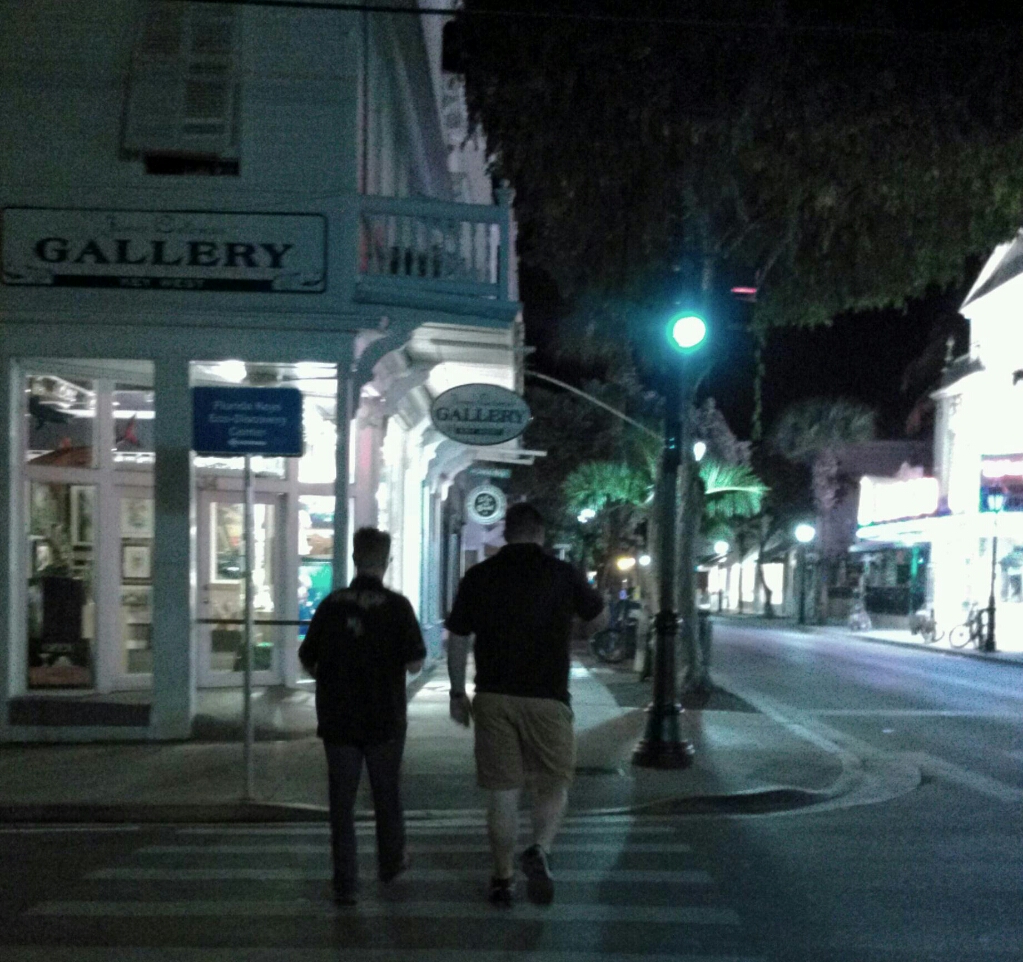 Even though locals complain all the time that Duval offers no intrinsically useful shops it sometimes seems like Duval is a main thoroughfare for people doing useful tings, hauling stuff on bicycles and on mopeds. Perhaps it is a street that functions as a crossing point, a transit route between homes and grocery stores, rather than acting as a groicery shopping destination itself. 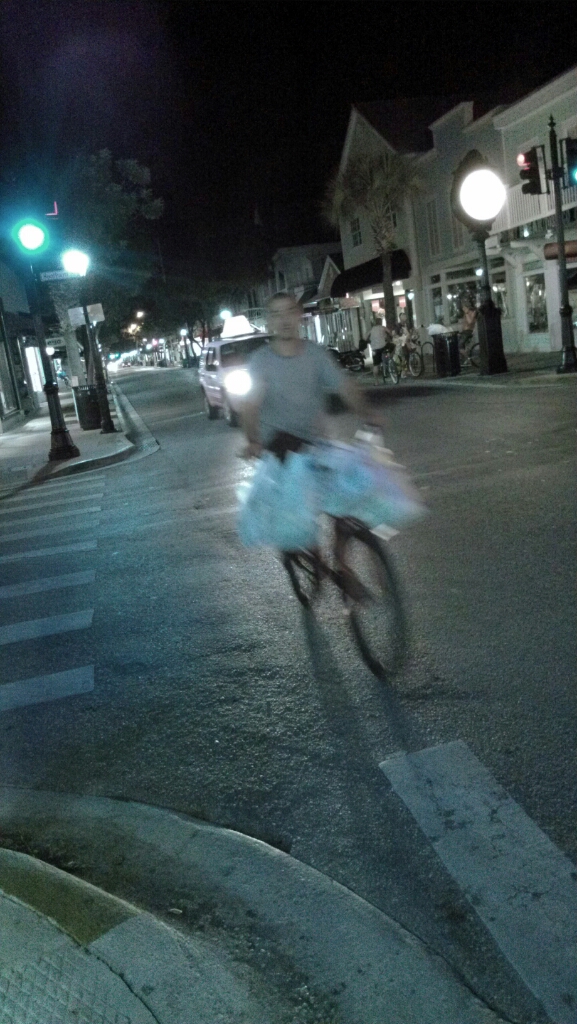 I am a terrible window shopper. I know women who love to troll stores and check out the merchandise, even though they have no intention of buying. They walk slowly, like birds pecking for food, looking and bobbing as they slowly lift one foot after the other pensively running their hands over the fabric, thinking deep shopper's thoughts. Me? I look for what I came in for and when found I buy and I leave. End of shopping experience. 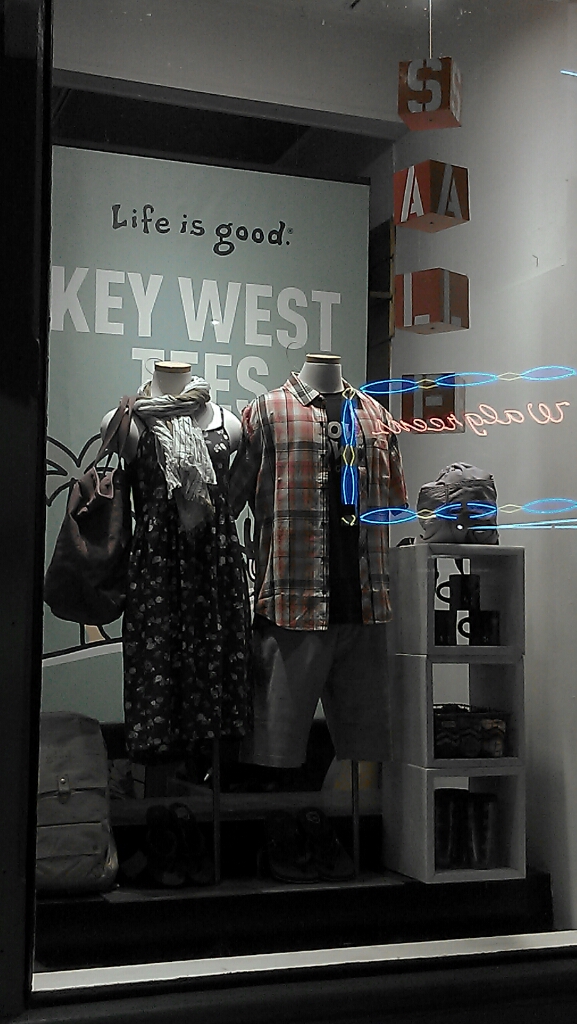 Key West is a city four miles long, an island at the end of the road, a dead end on Highway One, a place you can circumnavigate by bicycle in perhaps an hour if you pedal the 10 miles smartly. Yet every street corner has its little grocery store. I've never seen so many in such a small space, including this one on the 500 block of Duval, the former movie palace called The Strand turned chain store, open 24 hours to sell you what you need. Suntan lotion and beach chairs, flu shots and aspirin, beer (not between 4 and 7 am) and made-in-china souvenirs of your stop in this tropical paradise. 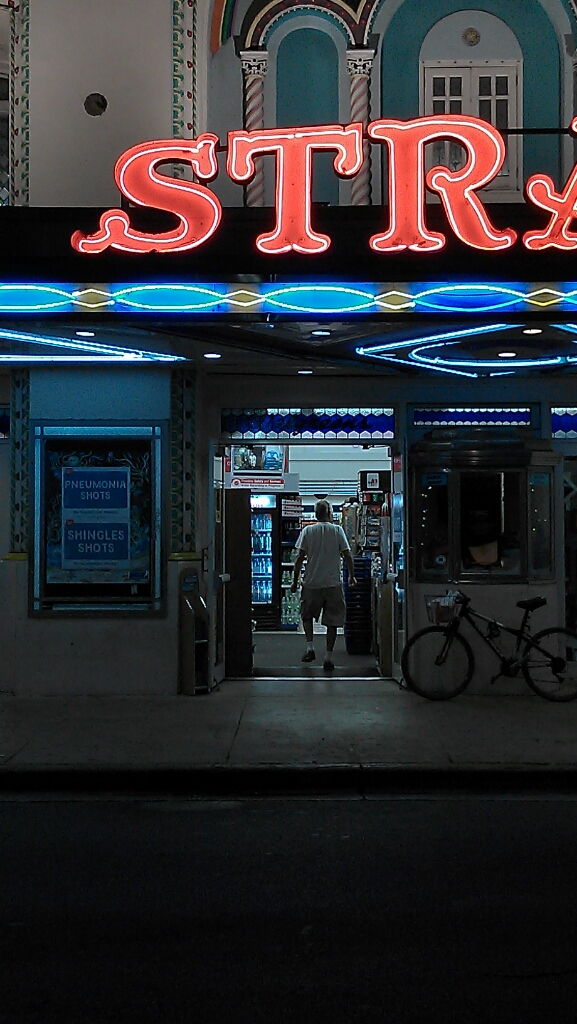 "Walgreens is the best bar in town, dude!" he proclaimed urgently as he glided to a stop at the curb and announced his happiness. It would have been rude to ask him what the bloody hell he thought he was doing dressed like that riding a bicycle decorated like that. Protocol requires one to act as though this style of riding through life is as banal and uninteresting as seeing a Schwinn cruiser pedal by ridden by your sensible aunt from Iowa here on vacation. 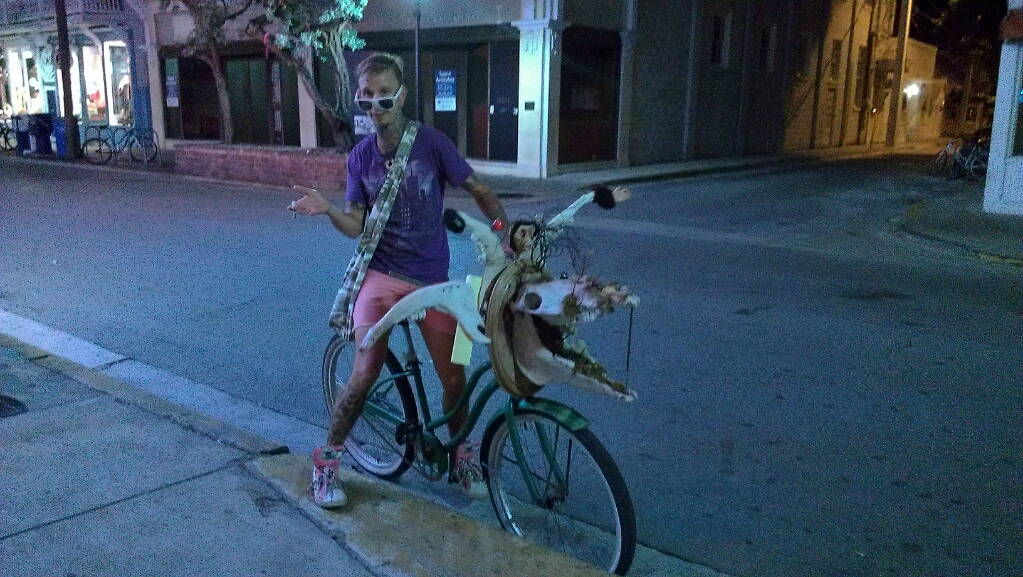 So there you have it, one unsolicited opinion about Walgreens. I have absolutely no idea what he meant but he seemed sober enough oddly, and perhaps his opinion has merit. Beats me. 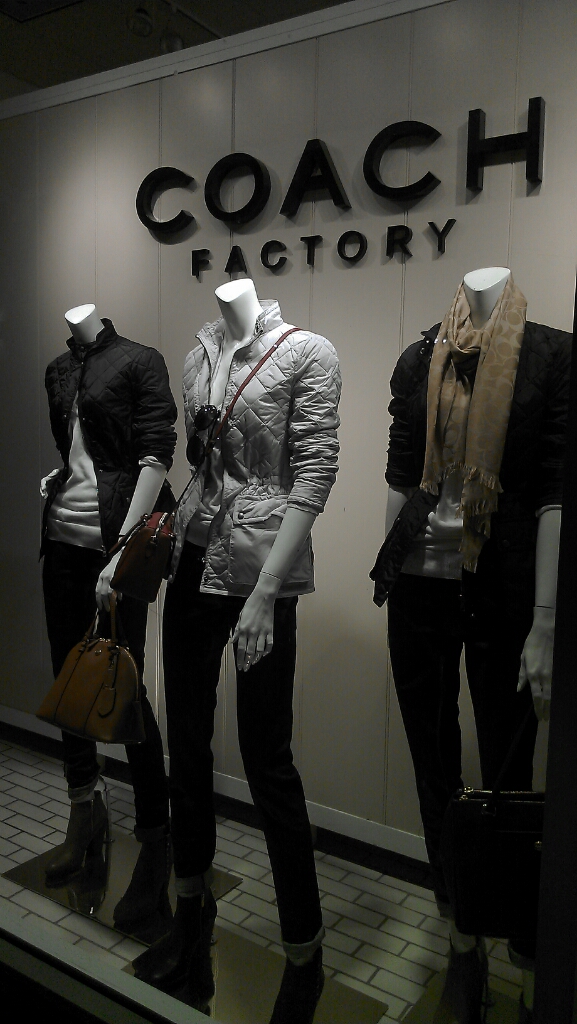 Here's a sad sight: Margaritaville closed. Sob! I am reliably informed it closes every night and as I am the world's worst barfly I can only say I took the picture because I liked the light and the darkness. I am so bad at making small talk ("How about that Texas Federal court decision on abortion?" type of thing is my idea of light conversation...) bars are a dreadful environment for me. Liquor stores are magnificent by contrast. 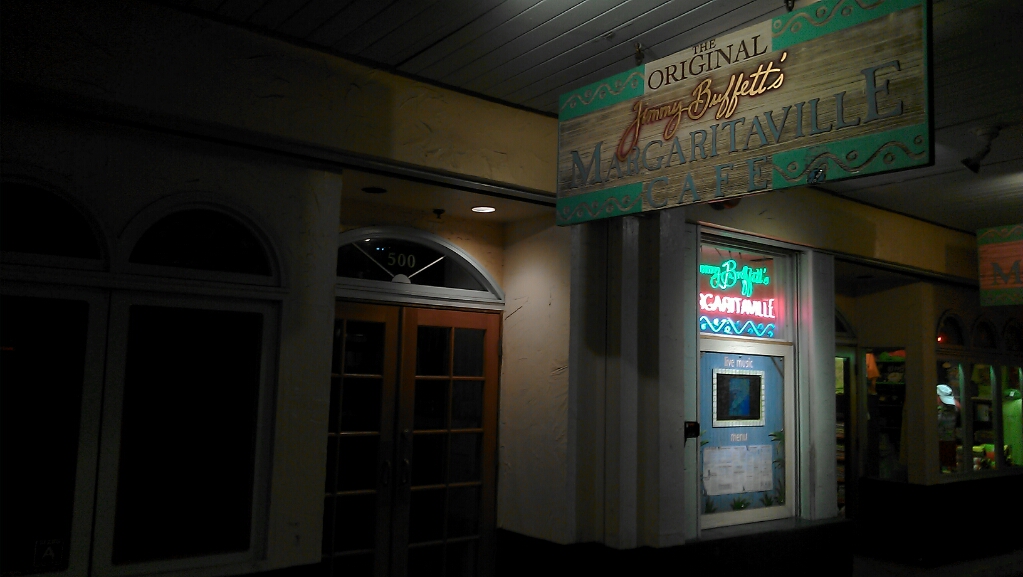 Of course sitting at home with a glass of Old Speckled Hen and your Kindle isn't going to do much for your love life if you yearn for the stimulating lap dances given by charming young Slavic women, who will dance with a will and no clothes at all for a modest and ever increasing fee. Their lair is on Fleming Street just off Duval as their somewhat controversial method of bill board advertising explains. It is a morally ambiguous pastime considering the inebriation of the clients and the rather onerous restrictions on how far you can go as for some obscure historical reason prostitution is illegal for everyone except bankers and politicians in the Sunshine State. 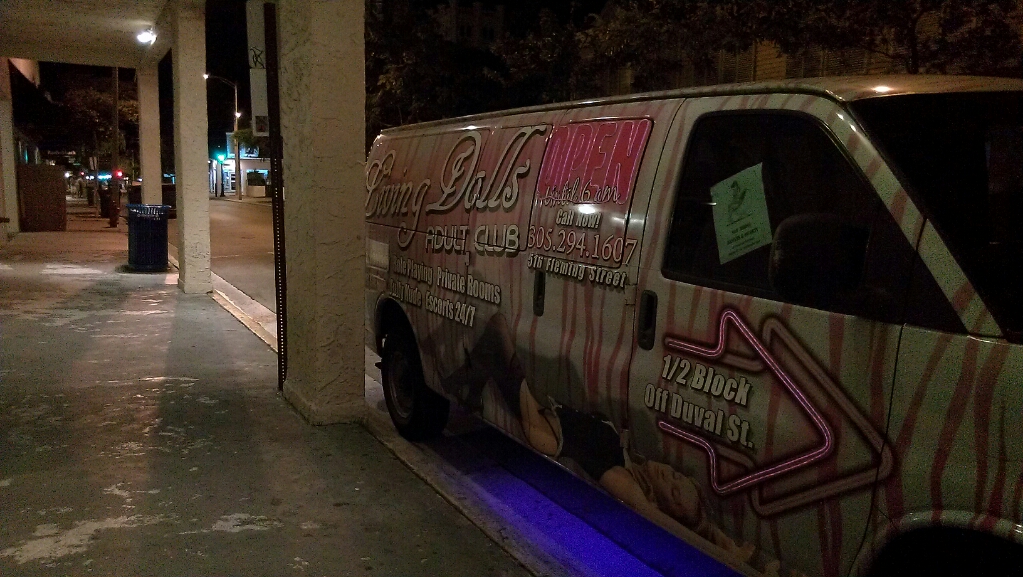 Public nudity is another of those appalling crimes against humanity that will not be brooked by a civilized society except during Fantasy Fest which takes place during the week leading up to the last weekend in October. 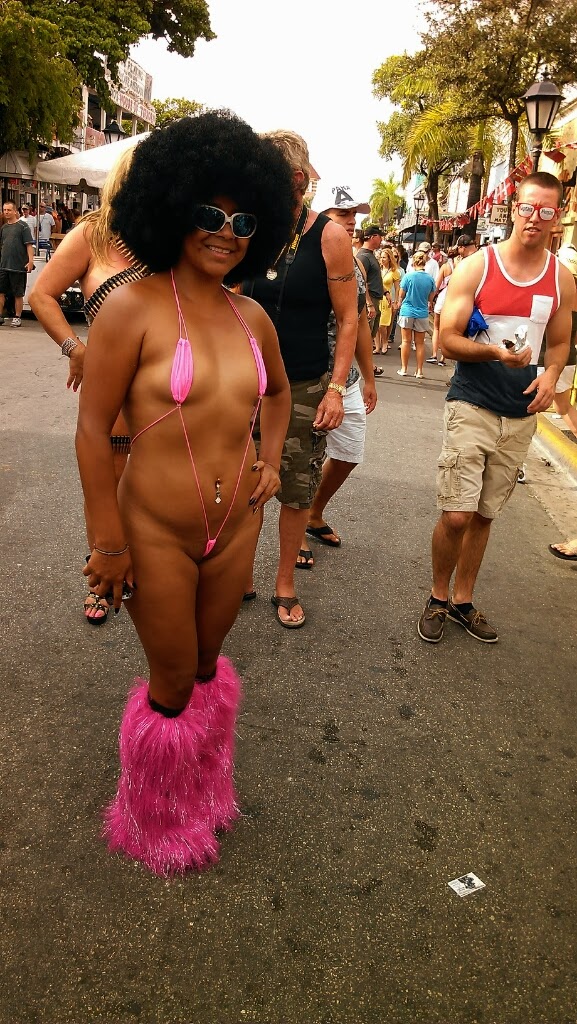 Its about that time of year when the debate starts to warm up again about the suitability of public nudity (no genitals, no nipples and body paint is okay) in a town where many people think Fantasy Fest has lost a great deal of the spirit of fun and festivity some residents believe was the spirit of the original bacchanalia designed to increase tourism in low season. I am of the belief costumes are for other people, as is public nudity, and I grateful that this brazen display of low intelligence quotients only lasts one week. It makes for amusing photography though. 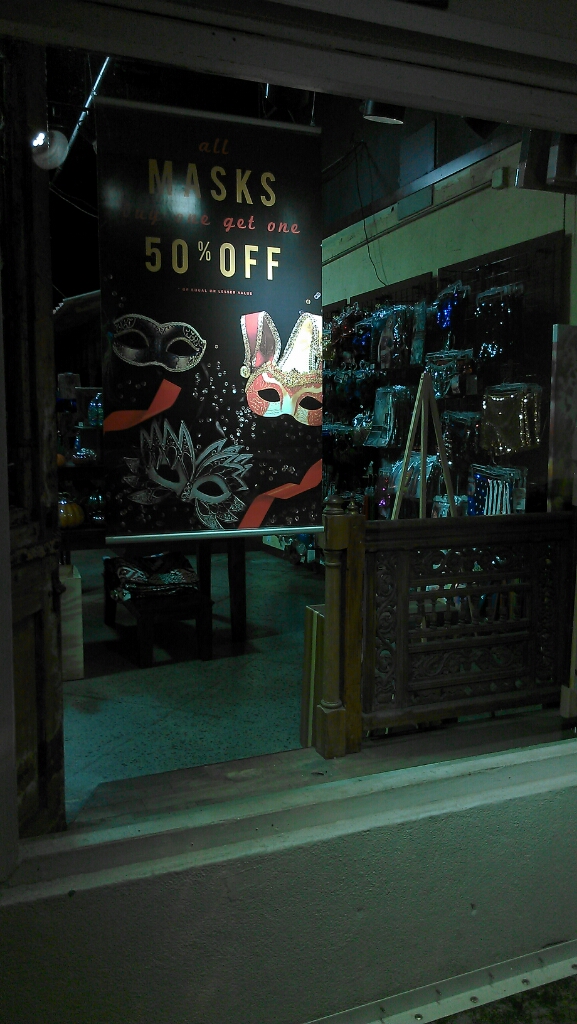 Key West at night sometimes looks like Disneyworld, fairy castles illuminated by spot lights, fantasies of the more juvenile sort on display on the same street where adults undress and locals look away and we fail to notice how pretty even the banal Hard Rock Cafe can be after the humans are gone and all that is left is shadows and light. 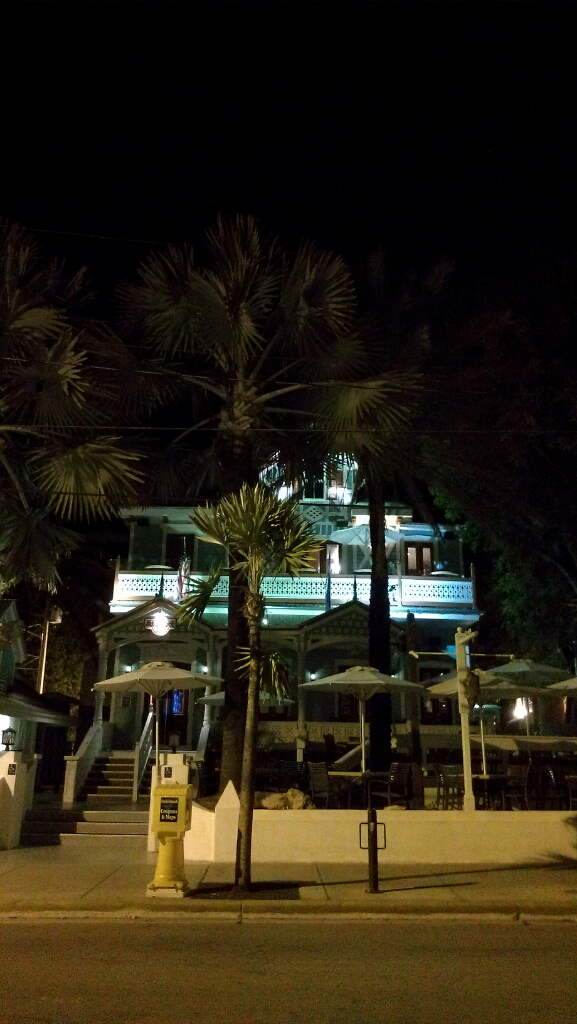 To-morrow, and to-morrow, and to-morrow,Creeps in this petty pace from day to dayTo the last syllable of recorded time,And all our yesterdays have lighted foolsThe way to dusty death. Out, out, brief candle!Life's but a walking shadow, a poor playerThat struts and frets his hour upon the stageAnd then is heard no more: it is a taleTold by an idiot, full of sound and fury,Signifying nothing. 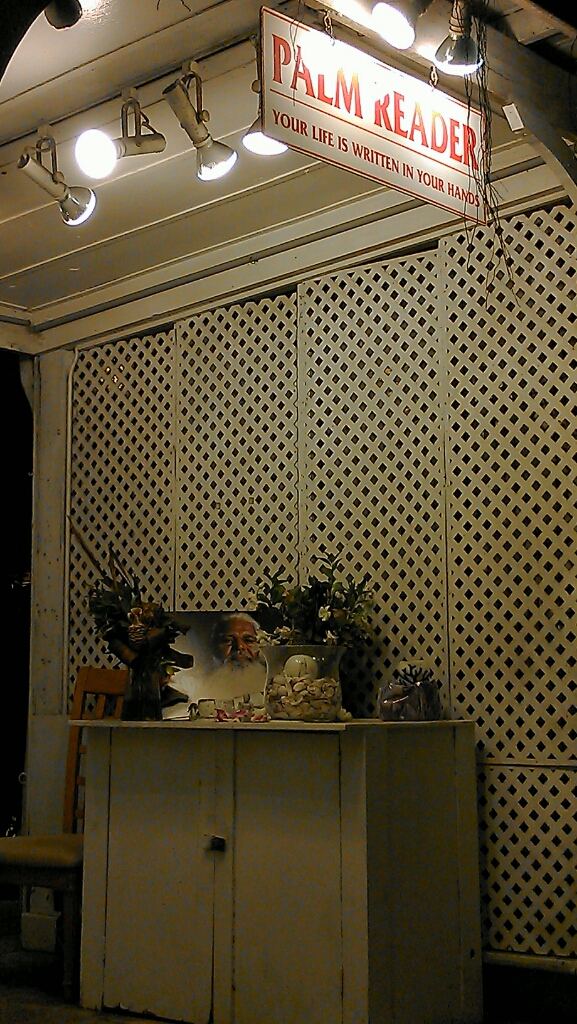 I guess the palm reader's lease hasn't run out on his Duval Street booth even though his own lease expired in Trinidad last month, killed in a home invasion when he was visiting his family. Duval Street: a dark place in a city that knows how to keep it's secrets. A street given over to police cars above and taxis below. Even the cyclists are fading from sight as the clock ticks past four. 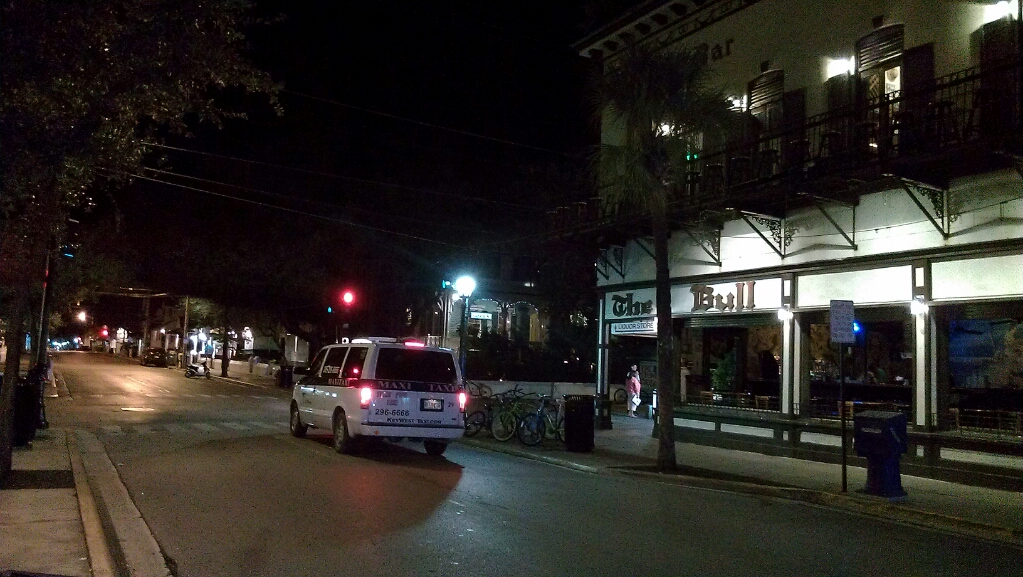 When Jack Riepe comes to visit he wants a decent hot dog, as he is from New Jersey and that rates as gourmet eats in the Garden State. My plan is to bring him here and listen to him make friends as he eats what I think of as pretty decent street food. Apparently I am not alone: 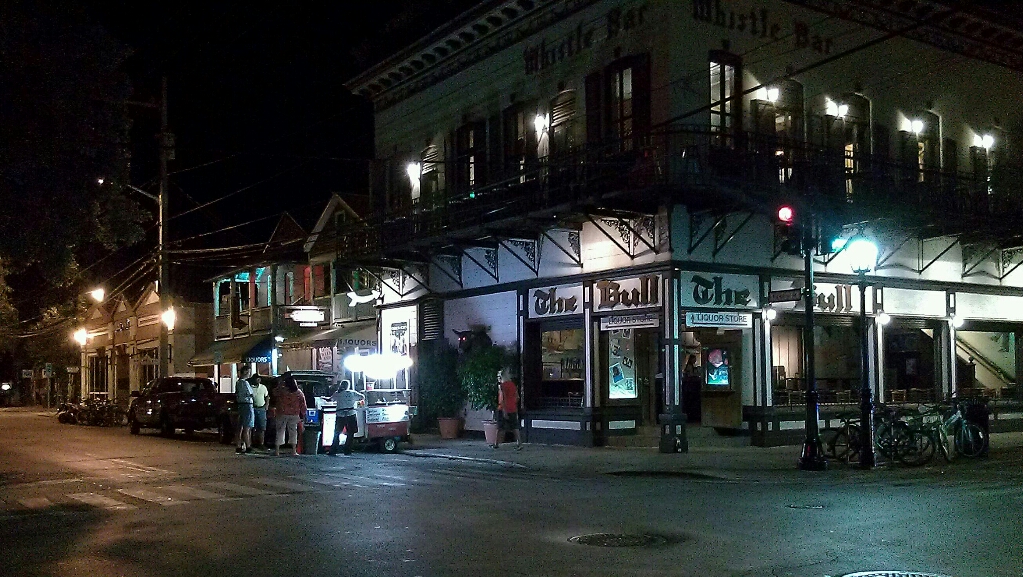 The perplexing question is should I bring him here, where I recharge my batteries drained by working night shift? Probably not, because Duval Street is where Key West is known, not here.