I took a few photographs wandering up and down and around following my dog who does not always walk in straight lines.  One of the last pictures I took of Duval Street before the lock down was a black and white photo under the colonnade in front of La Concha with  vendors looking for customers under threat of closure, which of course came to pass. And now the wheel has gone round and at least one is back to give a semblance of normal trade on a street that dealing with quite a few closed storefronts. 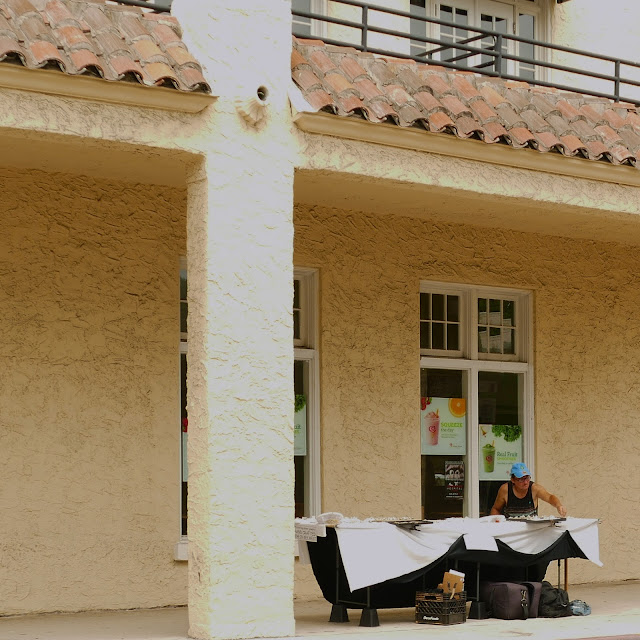 The thing about business closures in Key West is that they happen all the time. People come and people go and with them go their dreams, their jobs, their businesses. The damned virus has stomped on a greater number than usual I dare say but Key West is the island of dreams and hopes. So businesses come and go. I used to try to keep track of them but now I try not to act surprised when I see a new storefront. Because I am a police and fire dispatcher I like to have a mental picture of the addresses but sometimes I find myself losing track. Luckily we are fully computerized so as long as the power isn't out I have lots of tools to help!

There is always a spark I find in certain people, and I'm not one of them, that sees opportunities for business and Key West seems to fire them up more than usual. The thing is Key West is the kind of vacation town that makes the impossible seem possible. You might find Cancun delightful but setting up a business in a foreign country is only for the hardiest entrepreneur. Key West is Florida, the Sunshine State that welcomes every off beat and mainstream hopeful.

The funny part is once you've been here a while you can find yourself judging a new arrival's chances. If you look back over the years and I've been musing on this page almost daily since June 2007 you'll see I've noted that Key West seems to spit people out if they somehow don't manage to fit in. I can'rt exactly define the parameters but like the judge said in reference to pornography, I can't define it but I know it when I see it.

I noted in reference to the closure of one business there were comments made  to the effect that the owner never made any effort to fit in and despite the eatery's apparent success no one expected it to stay. I never ate there and i doubt I shall look up any of his businesses in St Augustine next time I'm there. But some people take these things personally as though they had a stake in other people's business acumen or desire.

I have a line for prospective applicants for residence whether via a job or business which is to tell them to give up all ambition. If you're lucky and persistent you can make a go of it but the chances of you rising to the top is unlikely as not only are the best jobs and locations taken, any outsider exhibiting ambitious tendencies may not find the climate the most hospitable.

I knew a guy 15 years ago who applied to be a dispatcher and got in the training program. I really liked him as he was my age and had a similar sense of humor. When he interviewed for the job the boss at the time asked that interview question about where he wanted to be in ten years. "In your job!" he said brightly as he had life experience and had played the game in other business environments. I winced when he told me. Wrong I said, Should have told 'em you want to enjoy being a good dispatcher. Ambition is not a good thing. He looked shocked but in the end dispatching wasn't his thing and he left.

I have no idea how to run a business, nor yet how to run one without ambition, and even less how to run a business in this coronavirus mess but I have no doubt clever hopeful ambitious people will step and give it a try in the wake of the closures. My other piece of advice, worth what it costs to hear, is if you choose to live in Key West be tolerant. Don't thunder around trying to change what you don't like. It irritates your neighbors and things are the way are for reasons that may not immediately be apparent.Key West: the town of unintended unexpected consequences.