I have visited the Blue hole on Big Pine Key for twenty years and then on Thursday the well known Blue Hole resident said goodbye in spectacular fashion. Out of the water and along the trail he crunched some thing so loudly I imagined it was my bones. 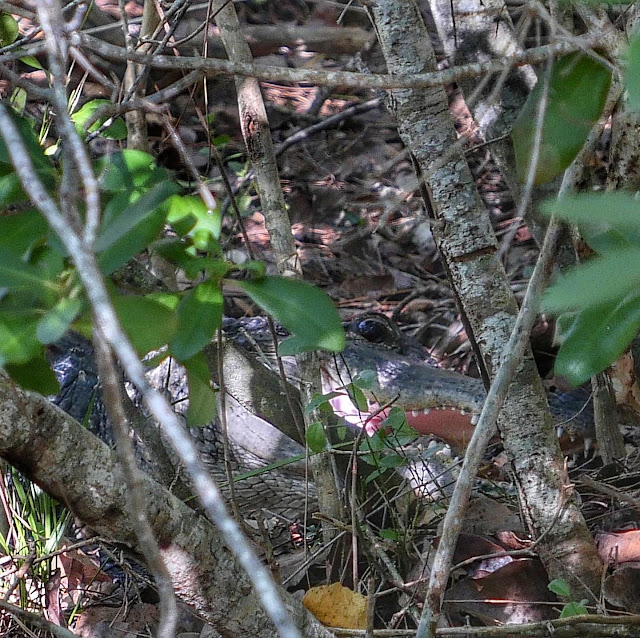 The Blue Hole is called that because it is a pool of freshwater in a spring of islands that lack freshwater resources. There are no natural lakes or springs or rivers or streams in the Florida Keys. Alligators live in fresh water (crocodiles, the less aggressive dinosaurs, live in salt water) thus there aren't any in the Keys. A puzzle is here! 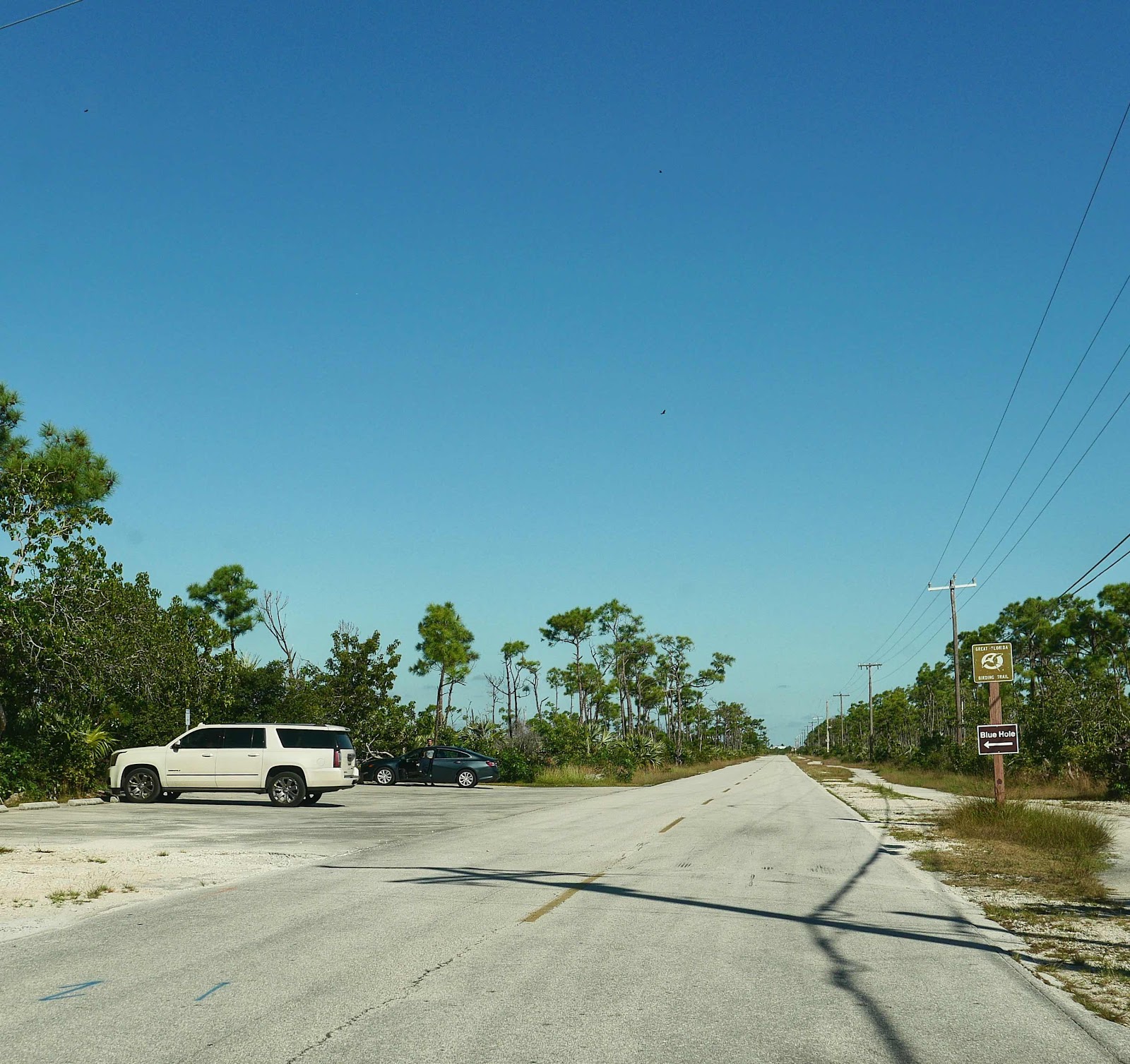 Since Hurricane Irma. new signboards have gone up to explain the vagaries of the Key Deer refuge whose office is closed to the public (Thank you Covid)  in Big Pine but you can read the public sign boards wherever they are posted. And there are lots of them. 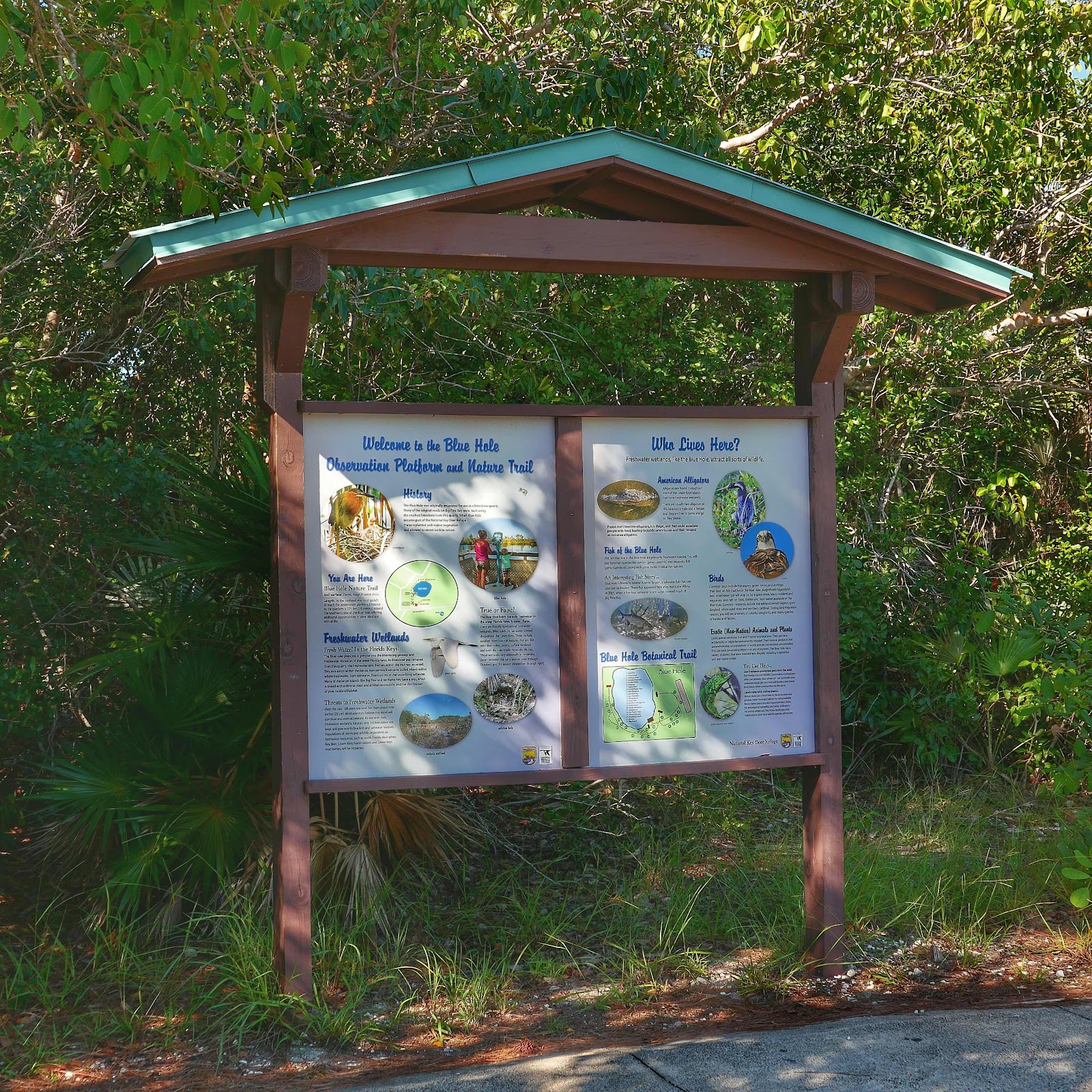 I have no desire to feed Key Deer who congregate around homes where the best vegetation is raised on ornamental gardens. The idea of feeding an alligator is about as appealing to me as having an unnecessary colonoscopy but some people do actually feed them I was told by a resident of one of the houses near the Blue Hole. 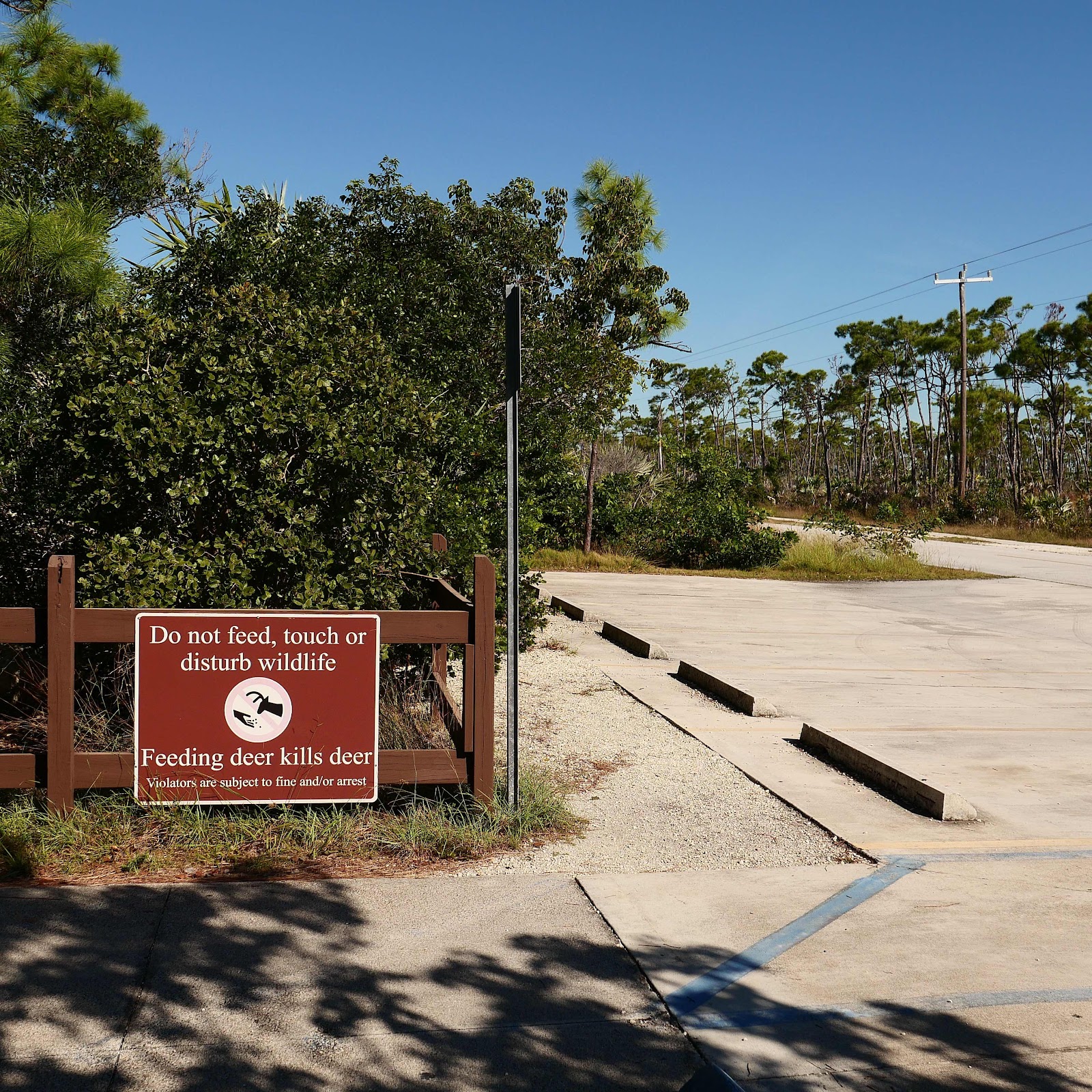 I know a long time alligator in the Blue Hole starved to death after ingesting a rubber toy thrown by some imbecile visitors which blocked its intestine and prevented it eating. Which explains the mystery of a fresh water dinosaur in islands surrounded by salt water. The alligators of the Blue Hole are imported. 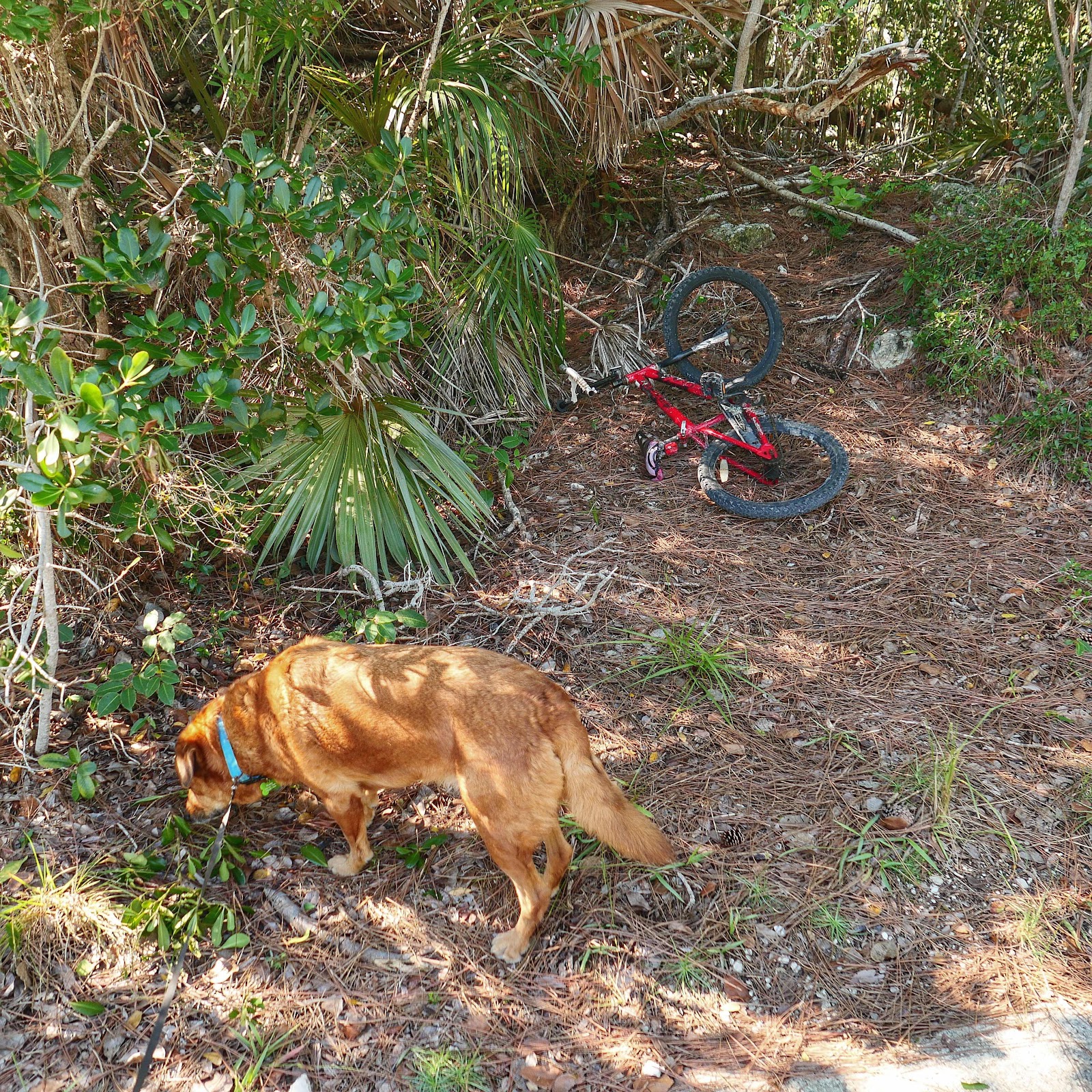 The story of tarpon in the fresh water was a new one to me, see below: 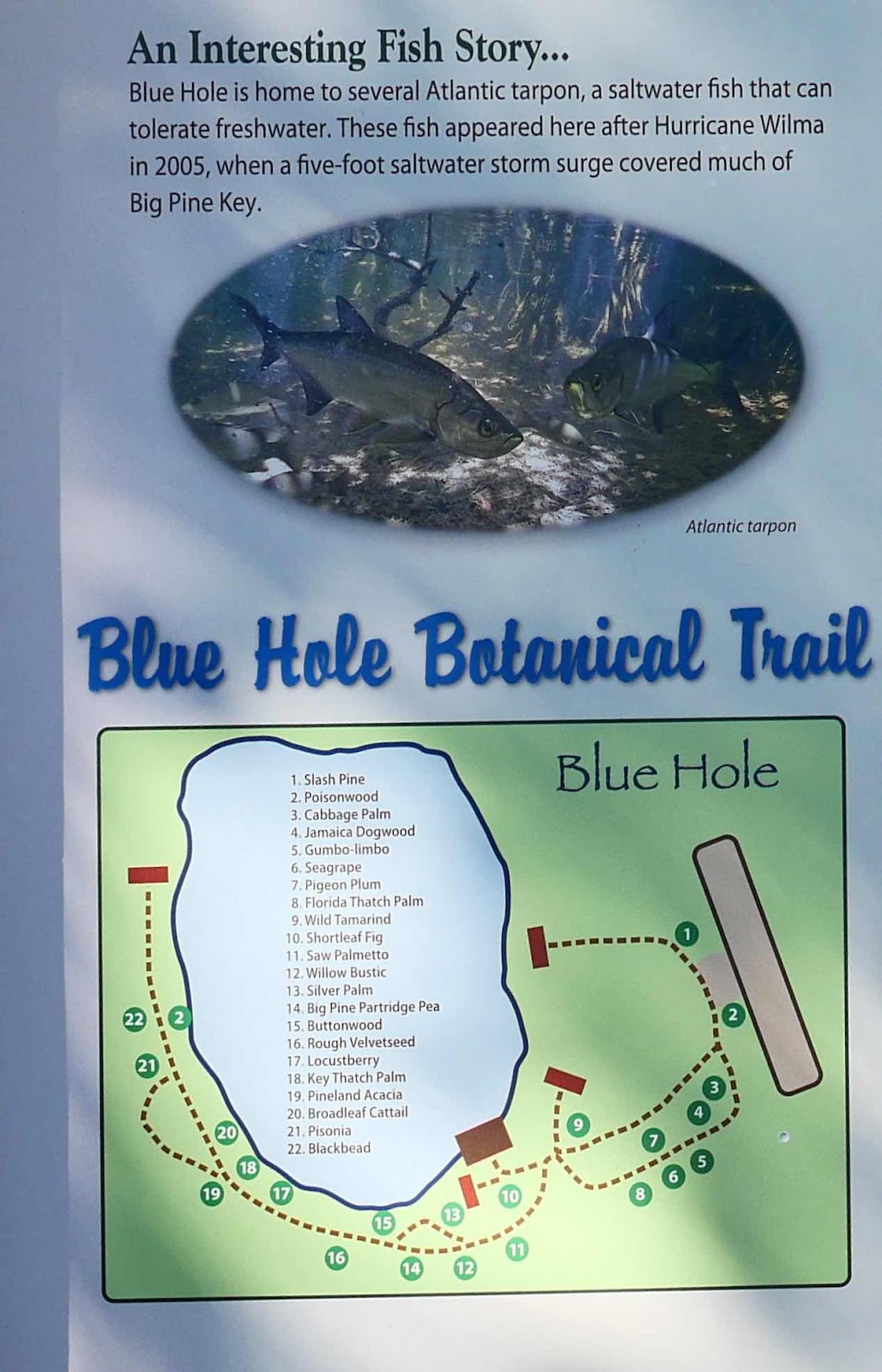 Hurricane Wilma pulled a number on these islands with massive flooding in every direction. My way home was blocked by an alligator in the roadway apparently washed out of the Blue Hole by the same floodwaters that brought the tarpon. All I saw was a wet black tail swishing angrily as the beast sought refuge in the mangroves. 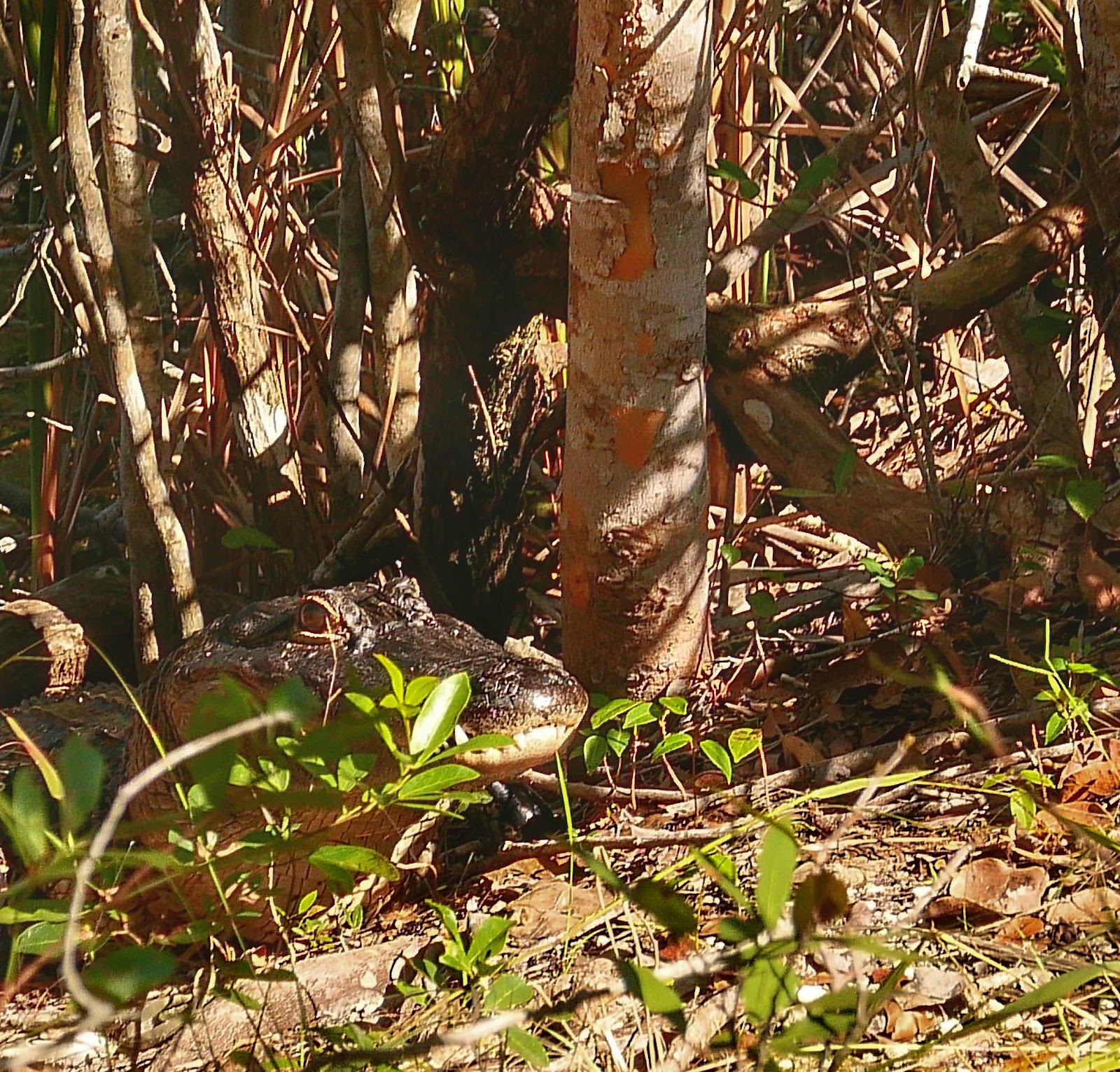 I was hoping to spot the alligator in the water somewhere near the viewing platform overlooking the hole which in real life isn't blue at all. Instead as Rusty walked on his leash ahead of me to the left I looked to the right and to my surprise saw the snuggle toothed snout poking up through the undergrowth. Rusty never saw a thing and was probably wondering why I keep him on a leash on the rare occasions we visit this place. Rules are rules and sometimes they serve a visible purpose. 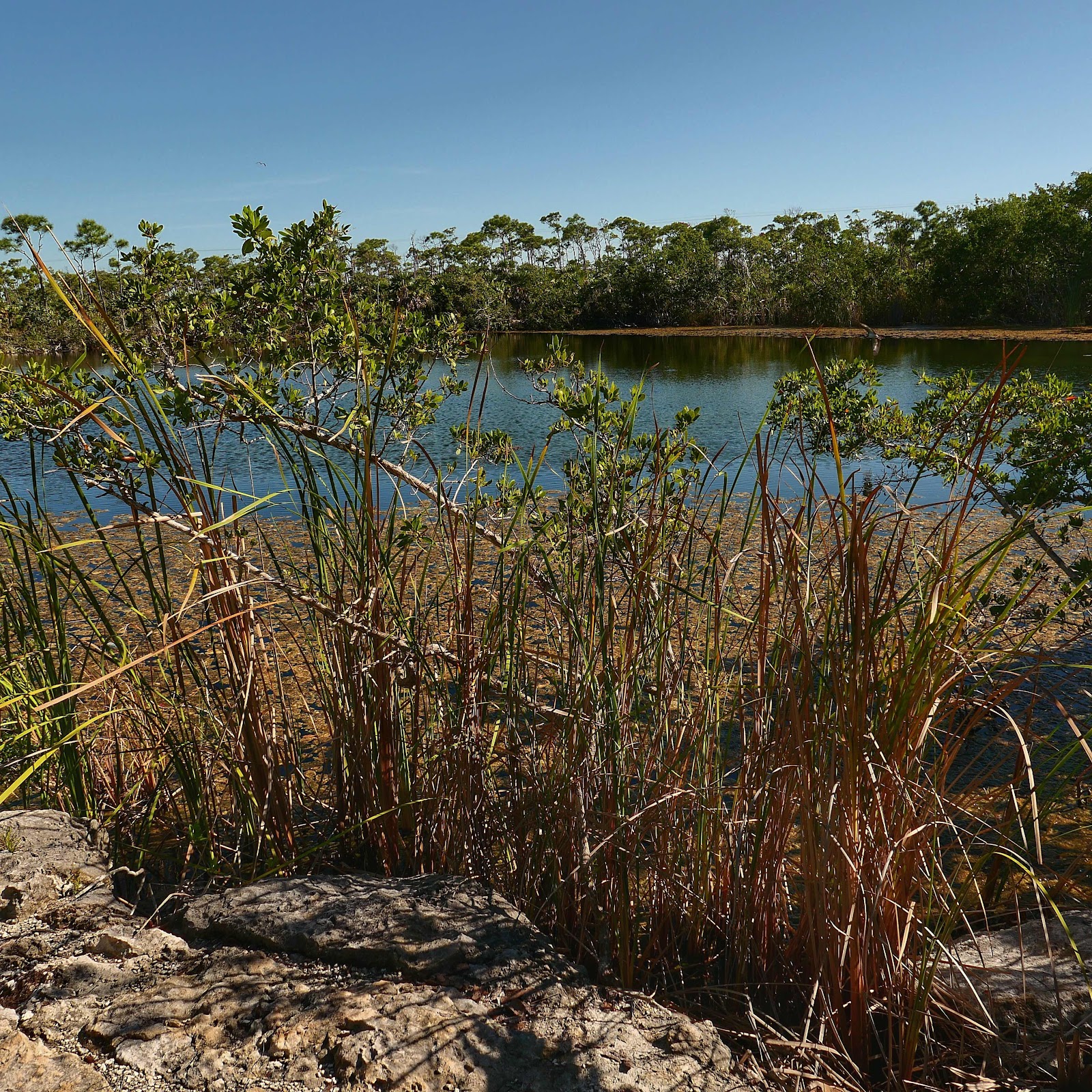 We walked on and wandered the trails round the hole. I kept Rusty close but honestly I wasn't concerned at this point. Alligators inspire terror and they are fearsome beasts but as long as you aren't stupid they will leave you alone. Being stupid is swimming in freshwater canals where they live, especially at dusk or at night. 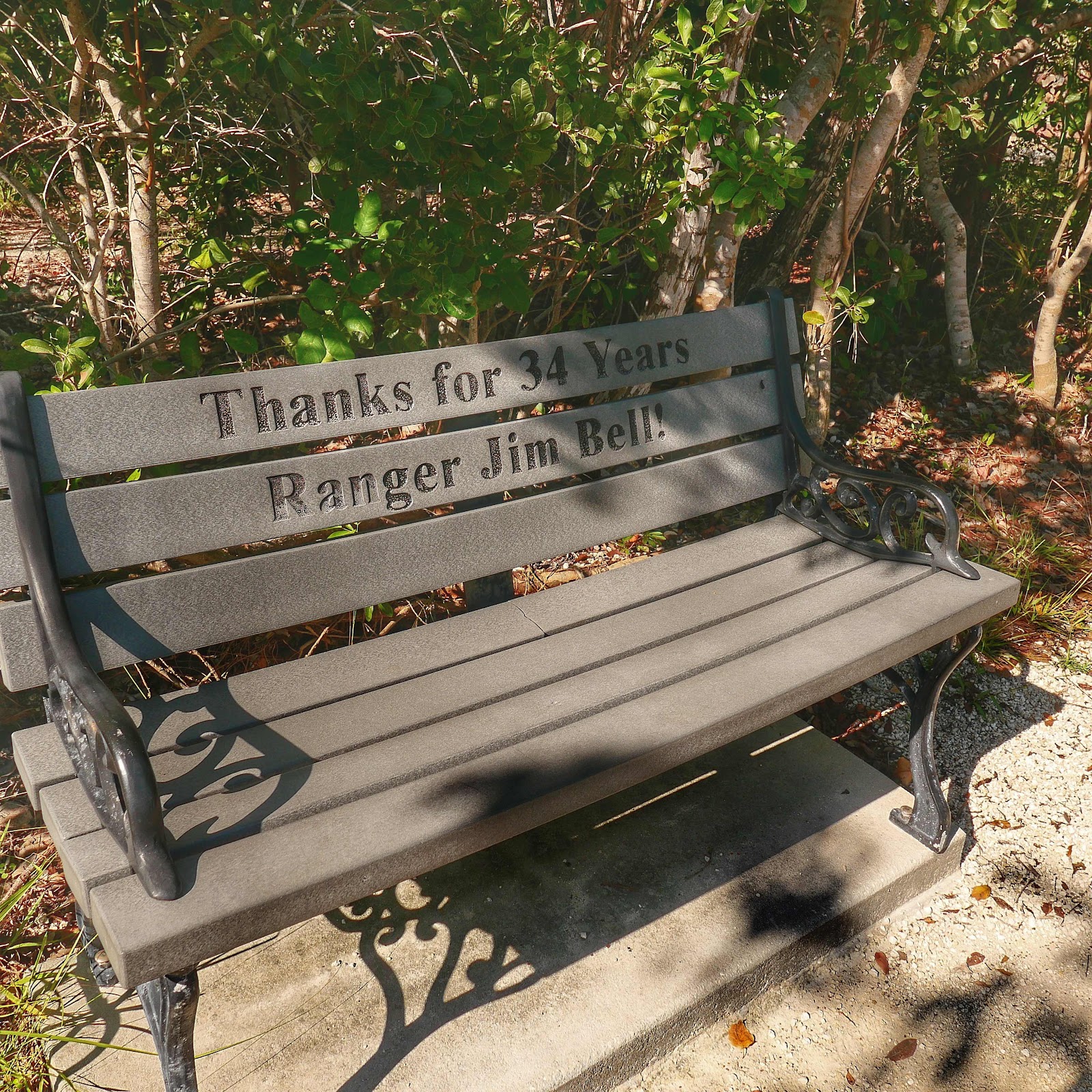 I wondered at the algae blooming in the water all round the pond. I can't imagine it bodes well for the residents of the hole and made me wonder if coming out of the water to sit in the shade might be preferable to being surrounded by scum. Maybe alligators aren't so fussy. 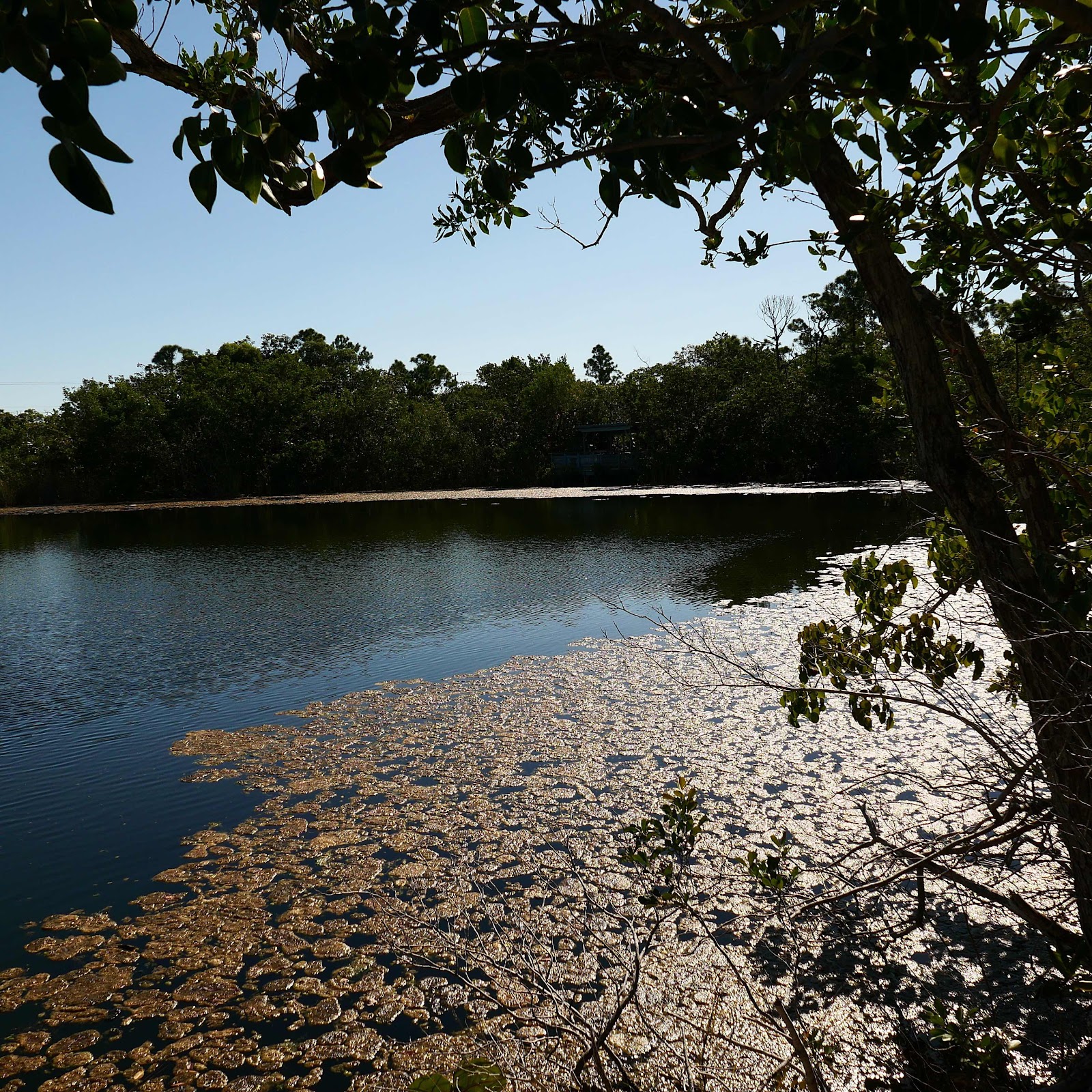 By the standards of mainland forests the pines of Big Pine Key, so called for the size of the island not the trees, are pretty small and underdeveloped. A pond like this in most areas of the East Coast would be nothing special, but around here where quarries are the only source of fresh water lakes this place is rare in the Lower Keys. 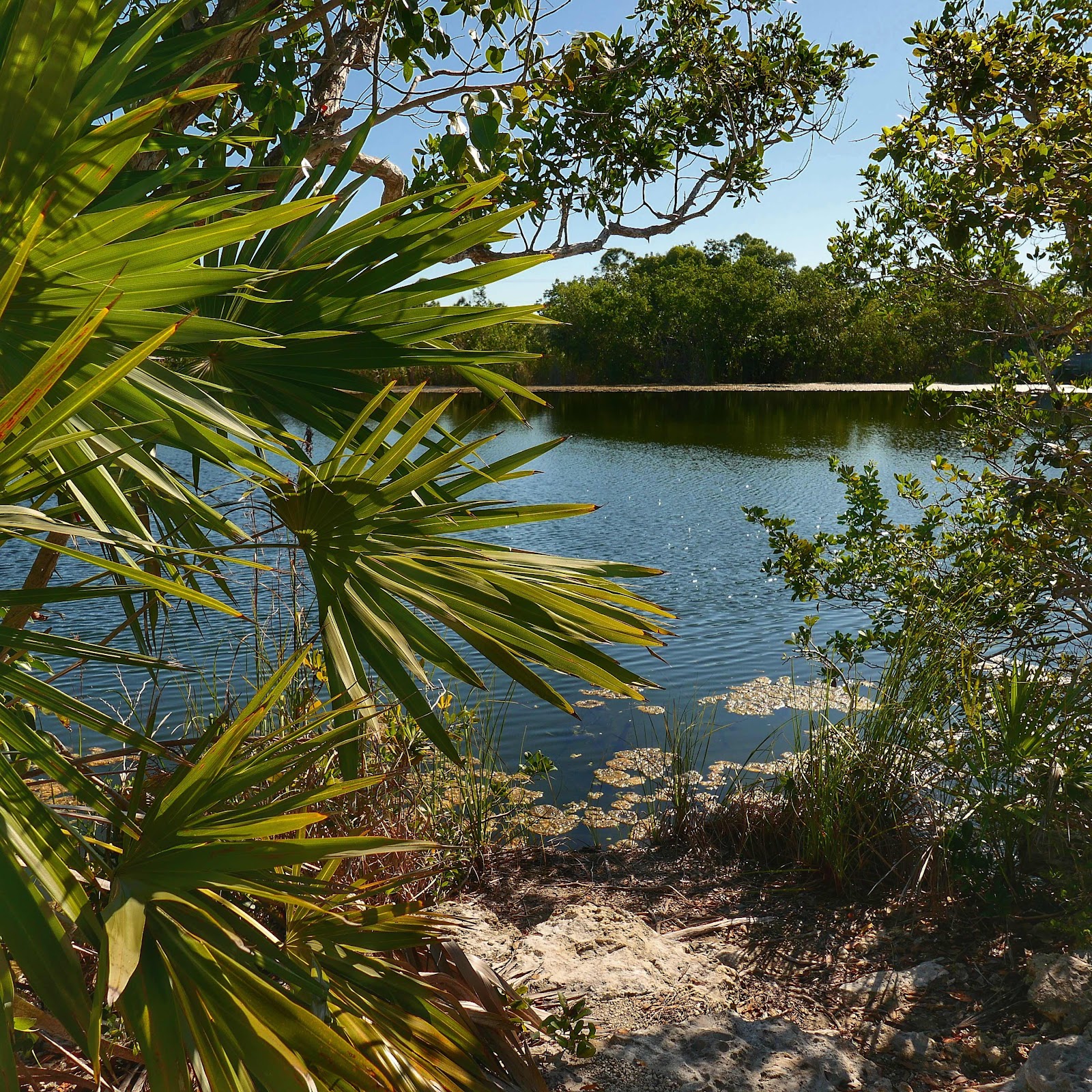 The construction projects required to develop these islands needed gravel and rock to build homes, rail beds and roads. And they dig these materials out of the ground. Where you find a freshwater pond you find a quarry. This one is particularly pretty thanks to the growth on its shores. 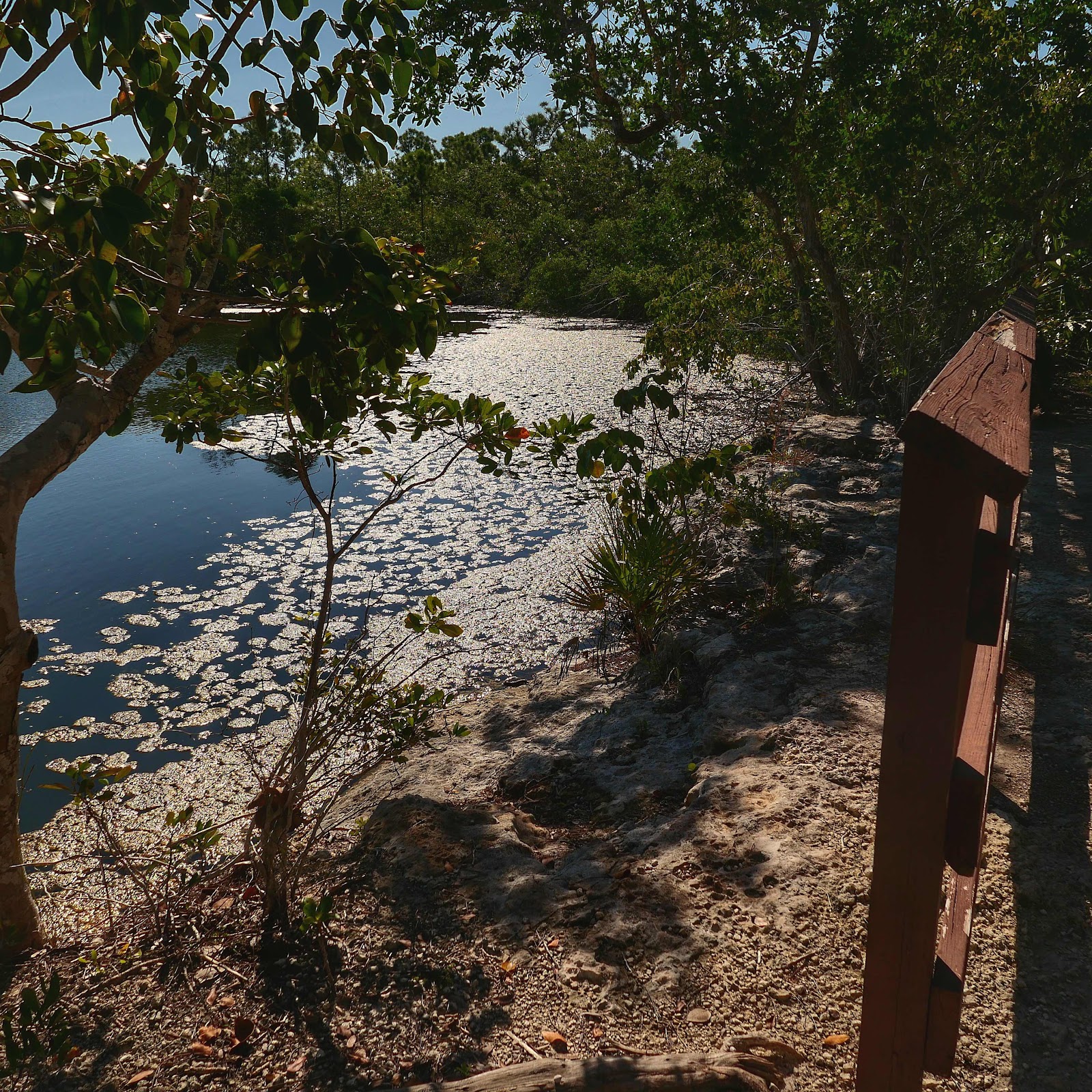 We walked out the back into the edge of a subdivision of homes that apparently attract flocks of Key Deer. Rusty was much more interested in the smells in the bushes than he was in live animals and just like the alligator he saw nothing around him except what he smelled. I reckoned it was a good walk. 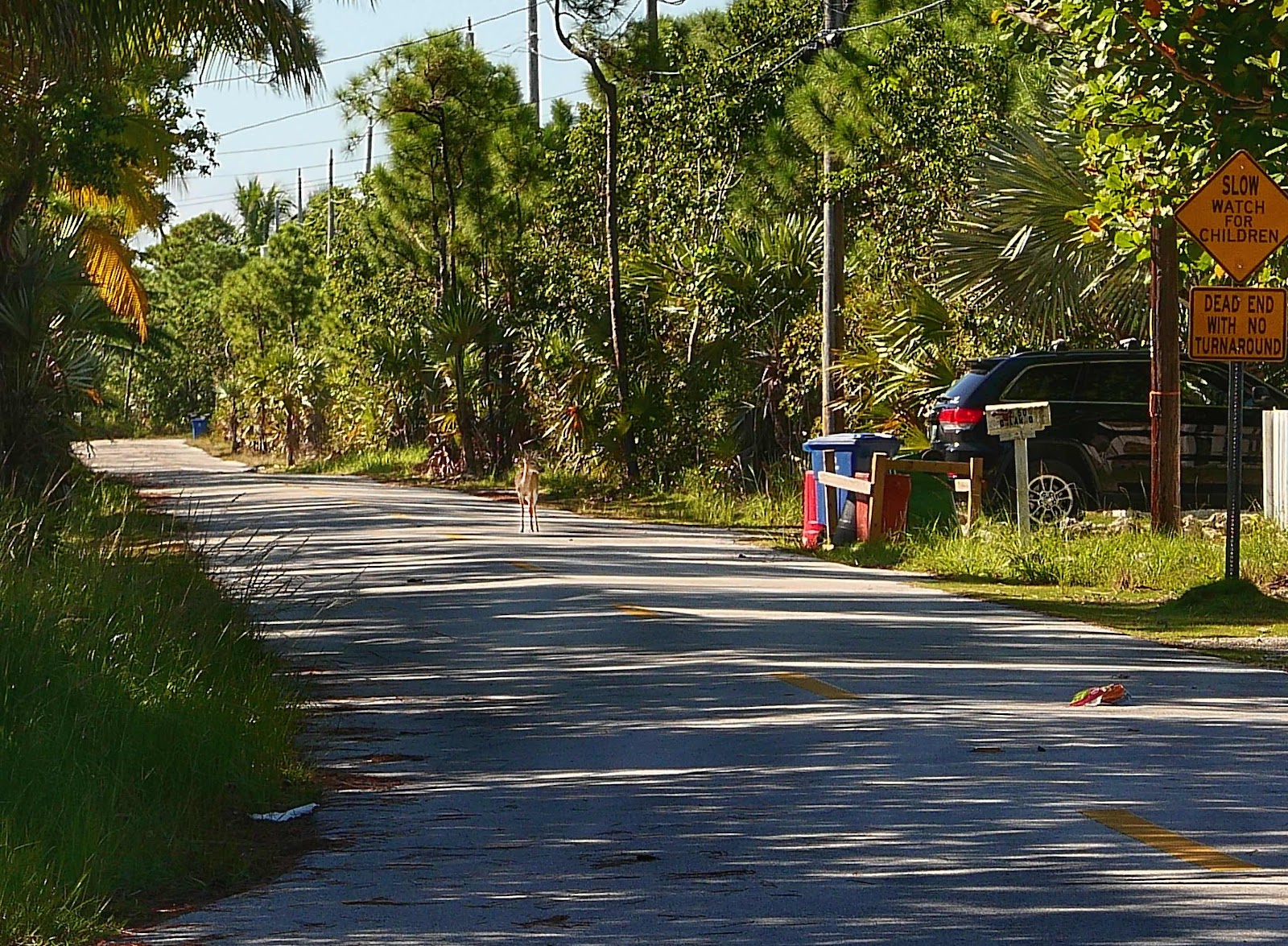 If the hour long drive to Key West doesn't put you off you could do worse than live behind the Blue Hole among the trees and wildlife. 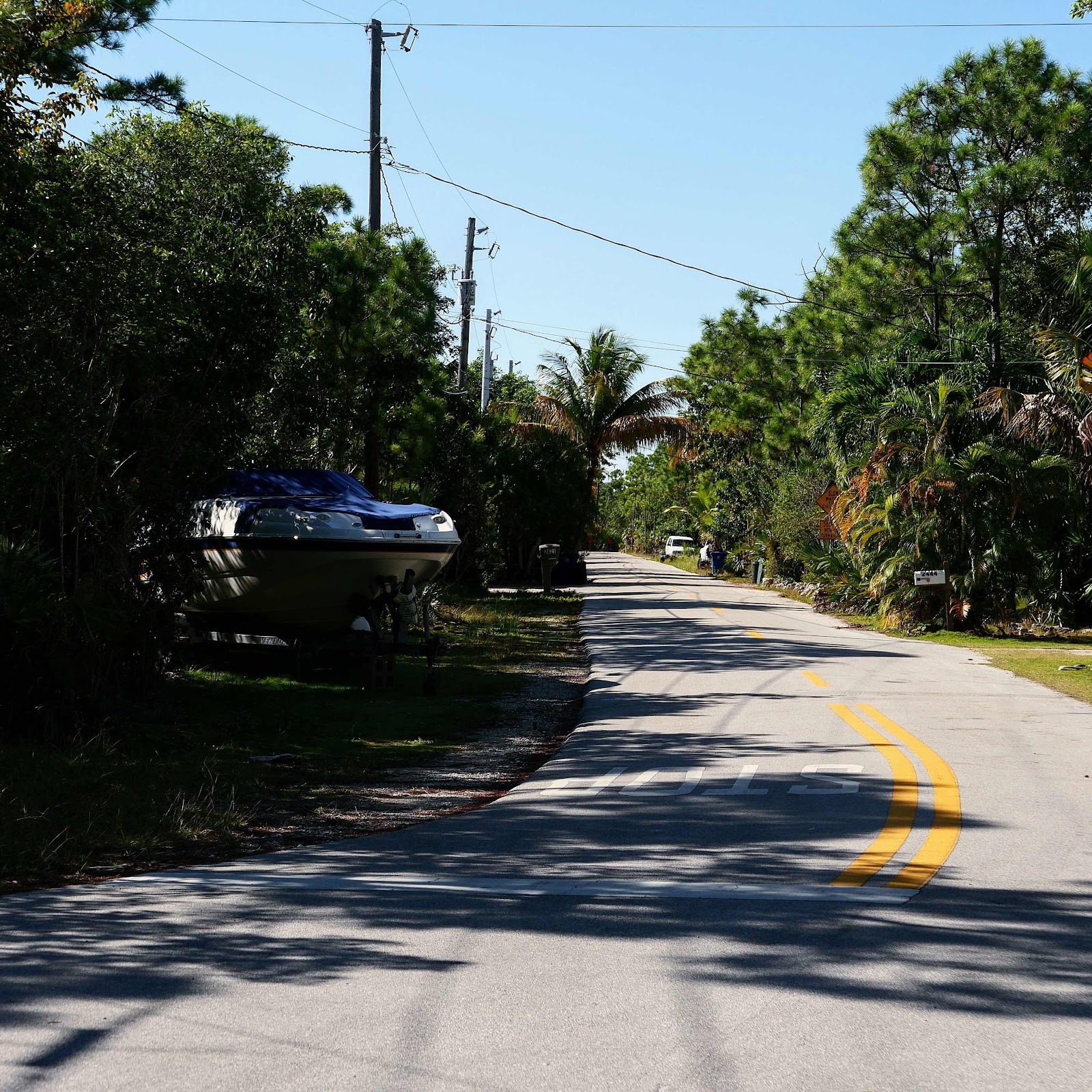 The speed limit on Key Deer Boulevard, the main connection to the Overseas Highway is thirty miles per hour and speeds are checked. Deer are everywhere so texting while driving will end up doing you no good at all around here. Driving north from the highway the road is straight and featureless among little pine trees and palm shrubs. Some maniacs ride the full five miles to Port Pine Heights on the bike path in the blazing sun. 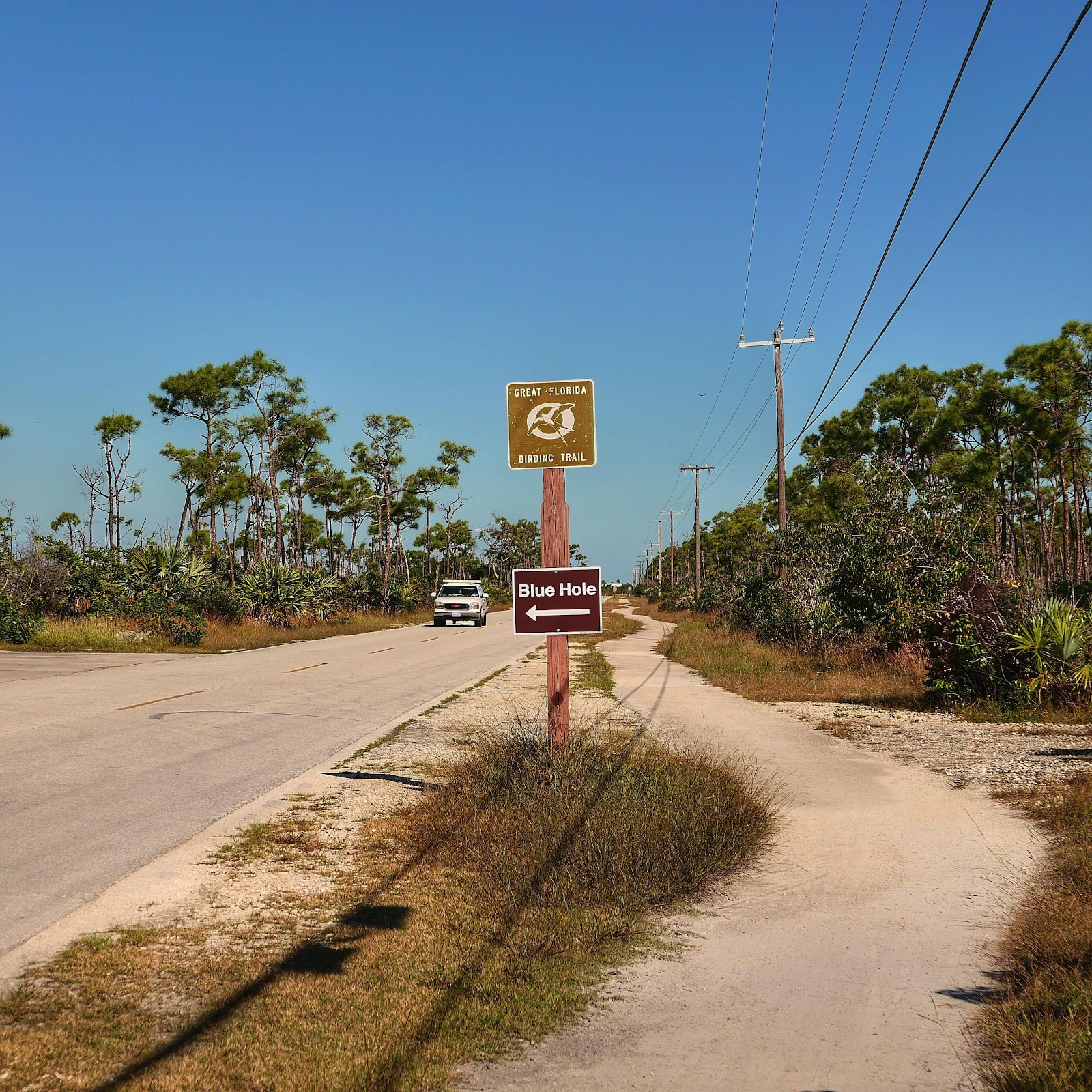 The Blue Hole, three miles from the traffic lights in Big Pine. 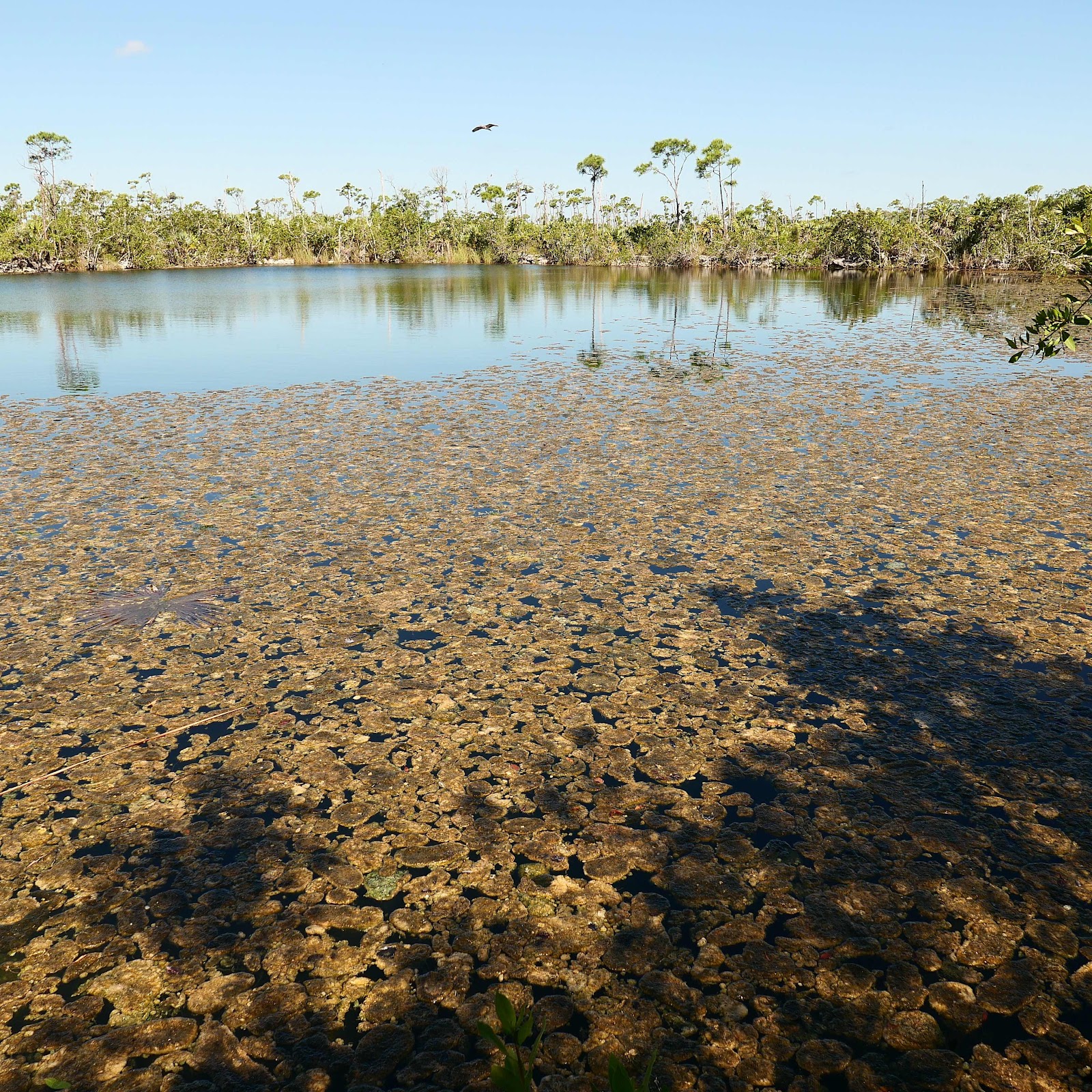 Normally you stand on the platform and peer down at the water. 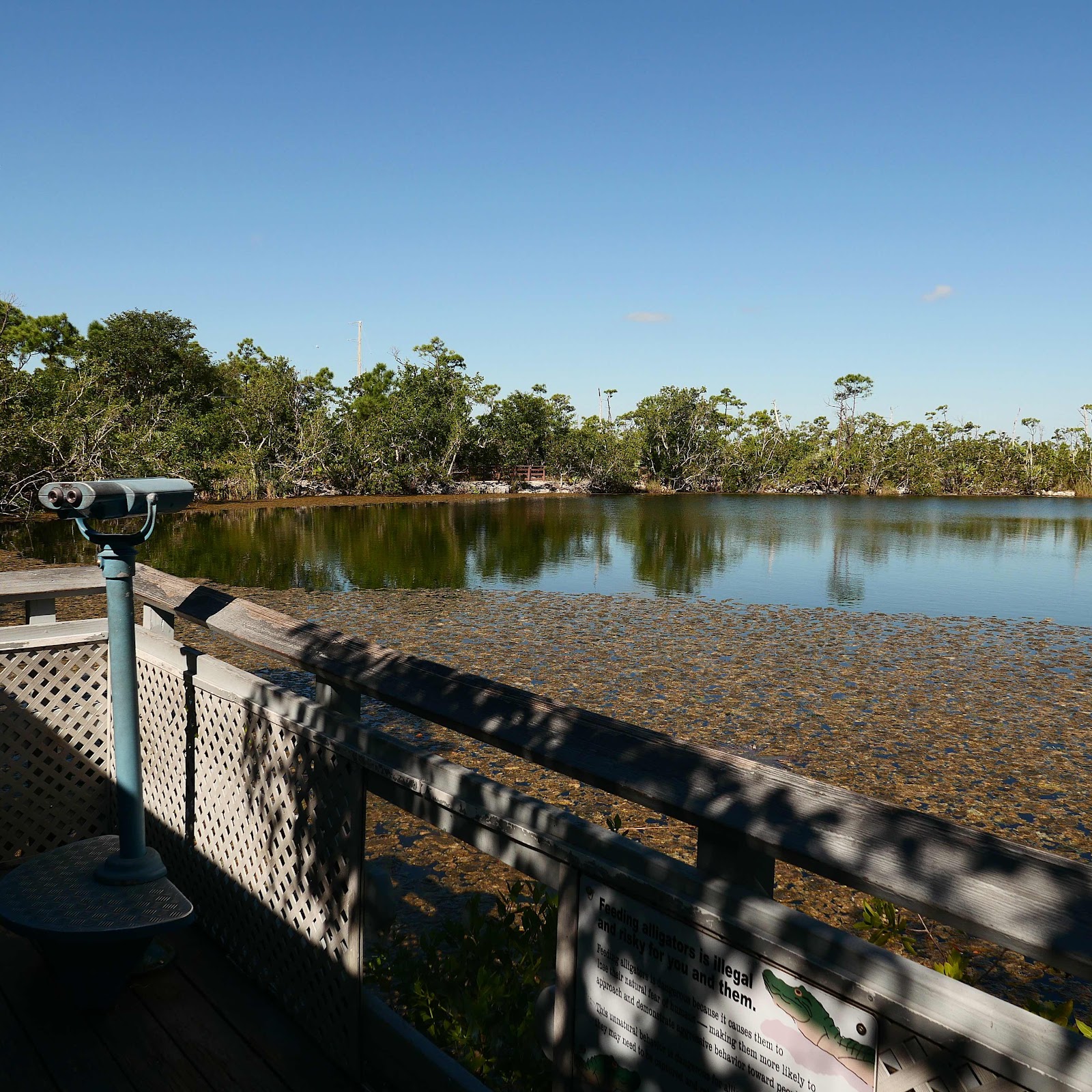 The literature explains how fresh water trapped in these places gathers in a pool above the salt water penetration in the rocks below.  They call the fresh water a lens as that is what to looks like I suppose when seen in profile. 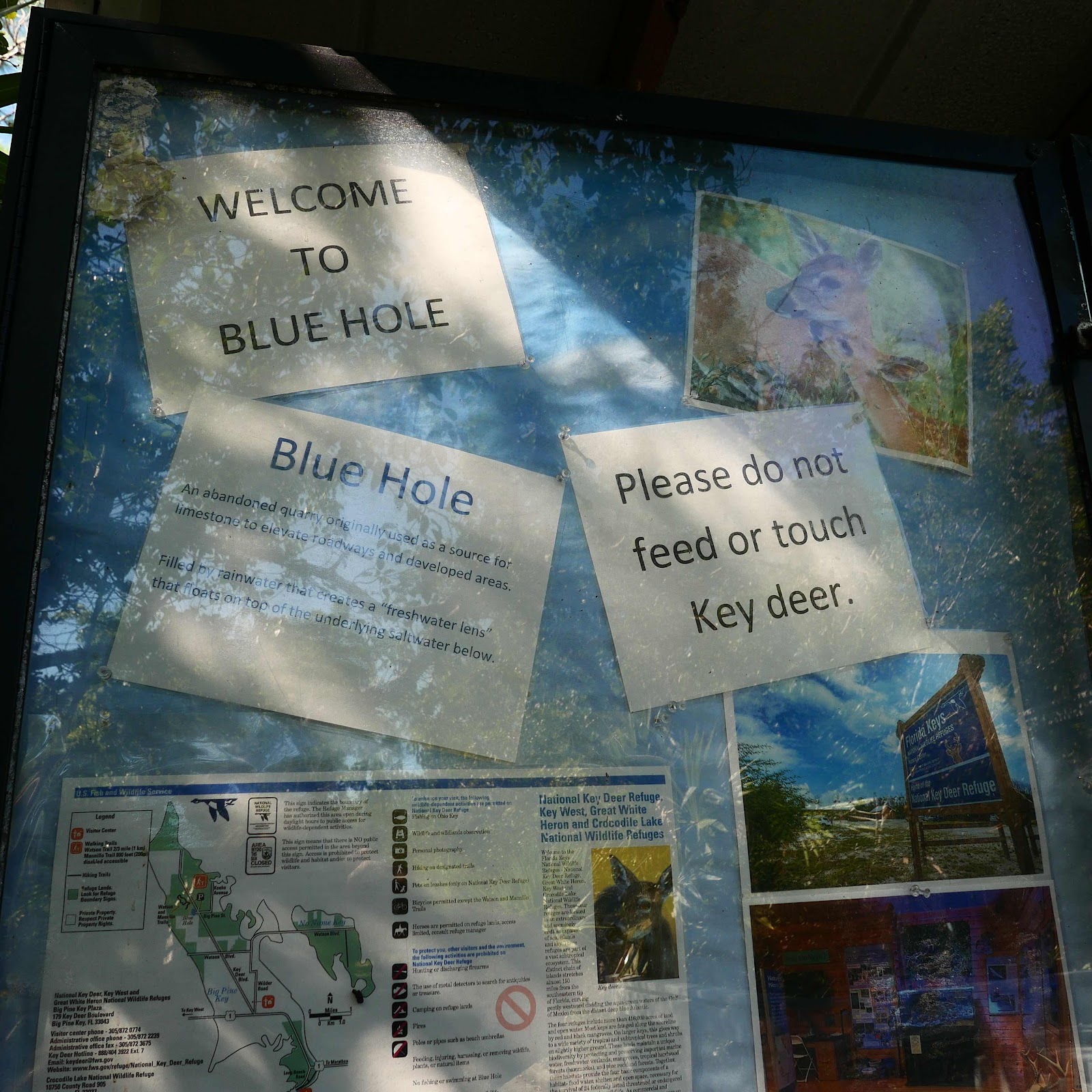 I recommend taking a look around before reading the small print based on this last visit. 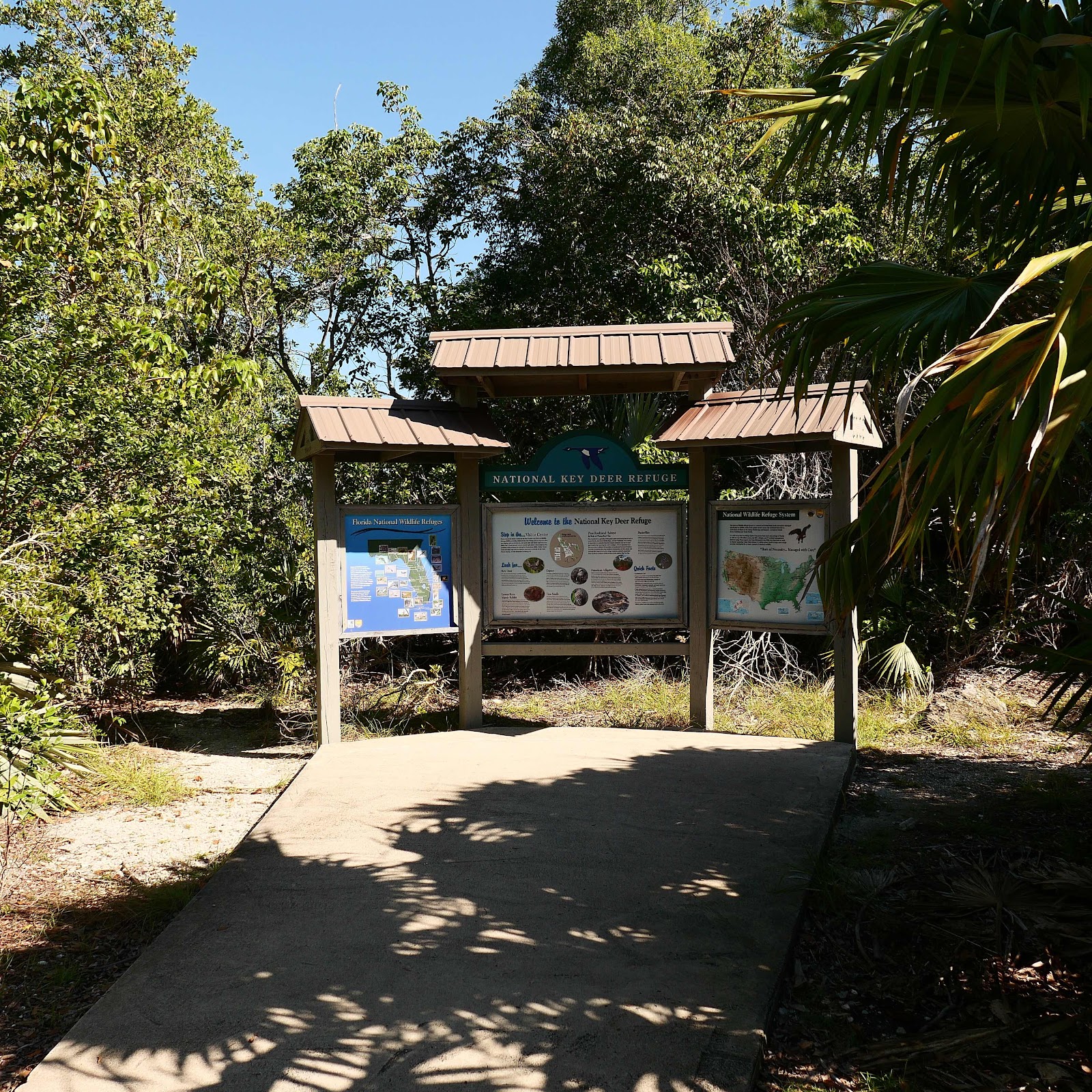 I put Rusty in the car and went back to see what I could find. I found nothing wandering around and peering. Oh well I thought, he's gone back to the water. Had he hell. A slight rustling sound under the trees and finally I spotted him.  He had long since spotted me and I could see his round black beady eye following my movements which suddenly stopped. 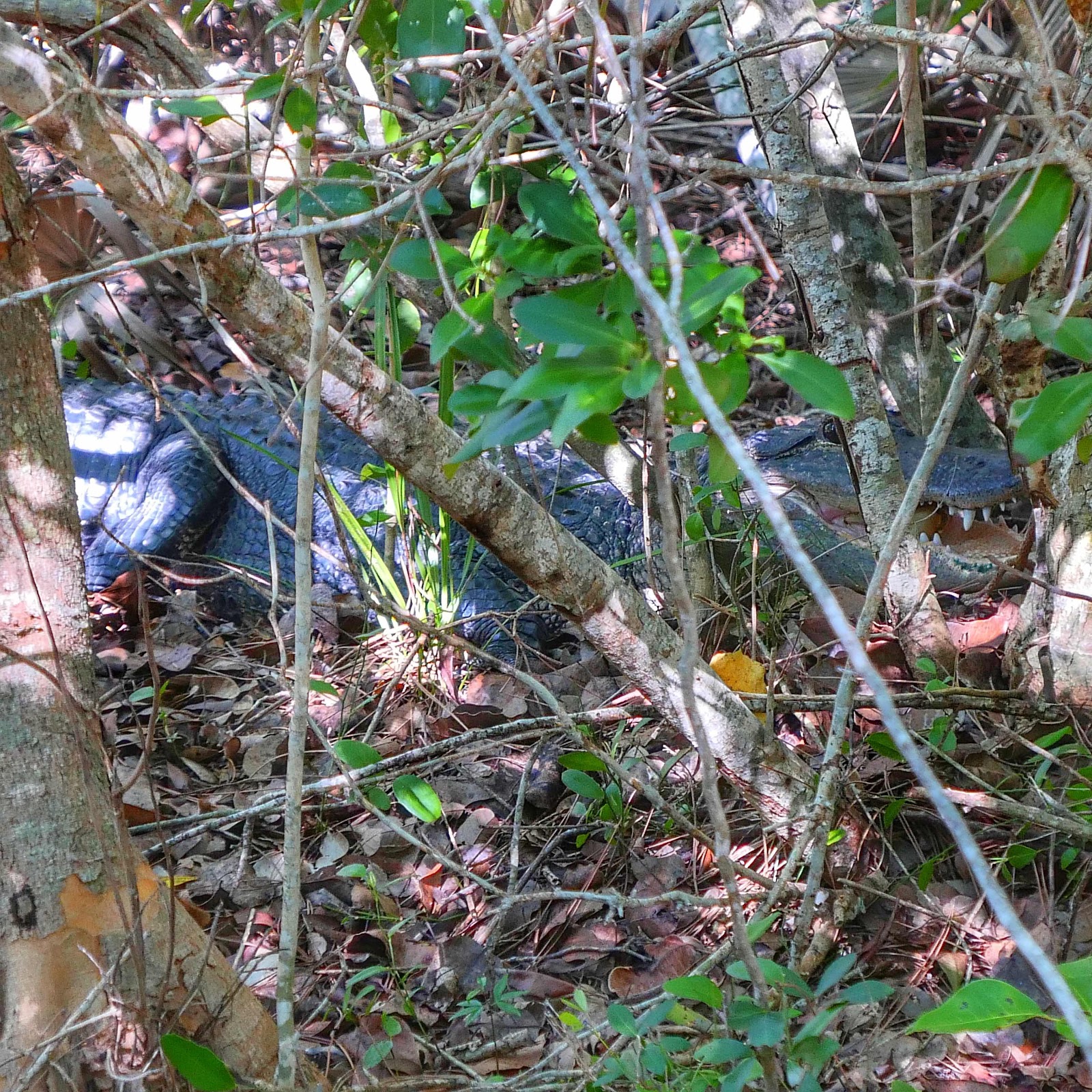 He found something hard and crunchy in the leaves and while I watched her crunched. Alligator jaws are powerful in part because they are fixed. They can't chew, they can only tear or in this case crunch. 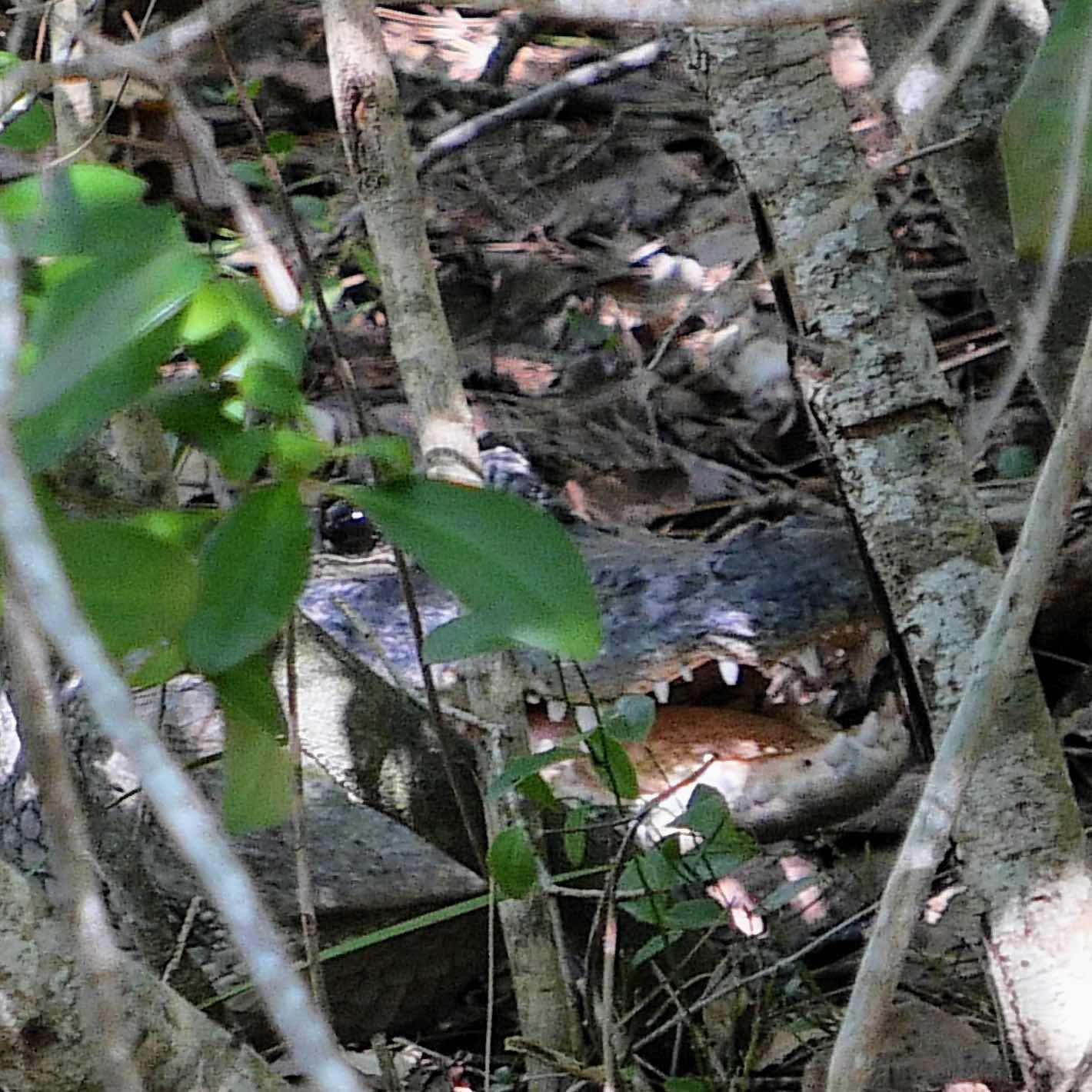 Alligators creep me out more than other predators because they snag their food when they can and put their prey in a hole underwater to rot so they can pull it apart more easily. This means they don't hunt when hungry but when they have the opportunity to grab something. 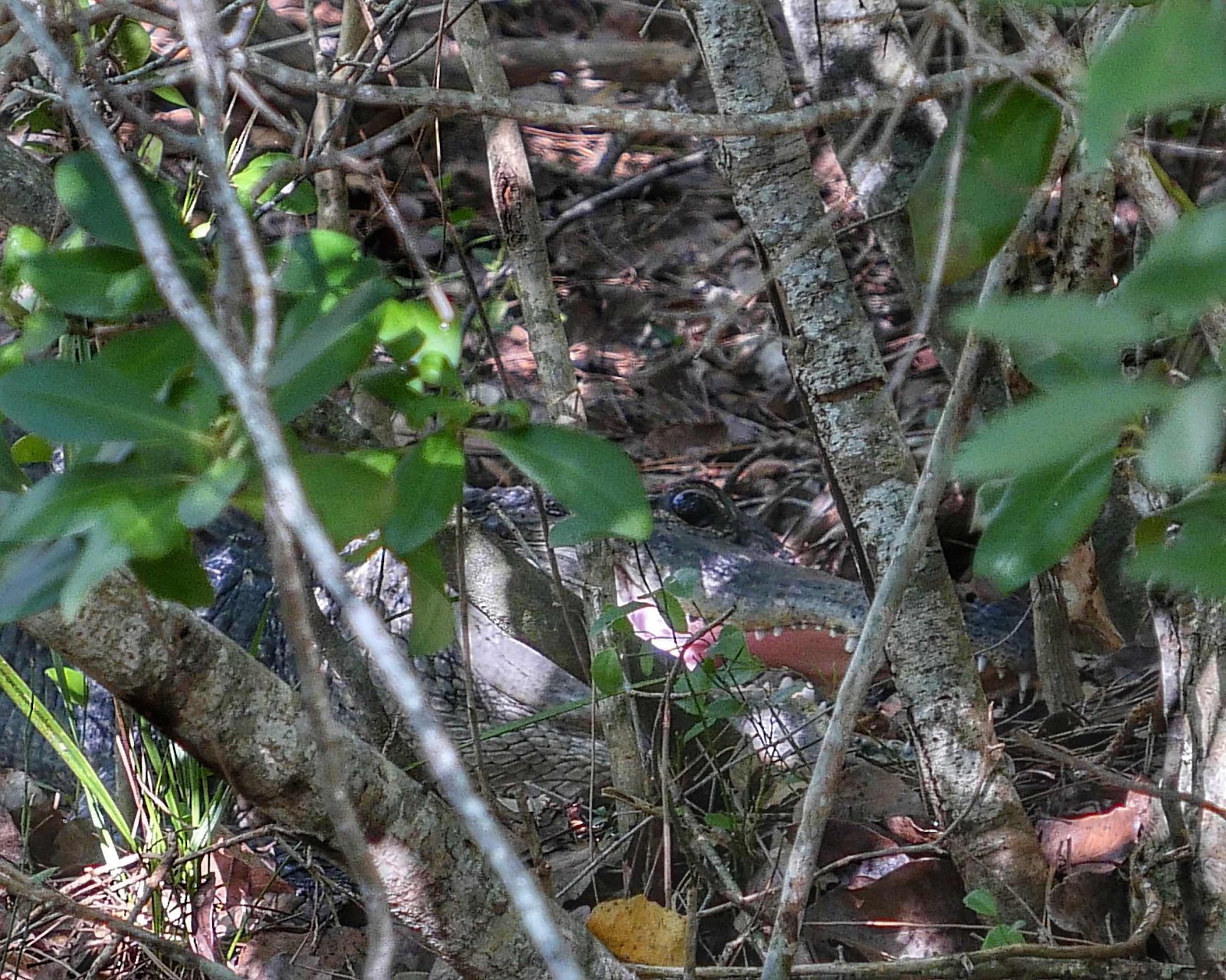 They can run like mad on land and they swim like fish. Well adapted is what you could call them. I'm told we look large to them on land because we tower over them and that puts them off snagging us. I hold onto that thought. It seems to work, as he turned around, came out of the tree with some trouble with his tail and then rested, watching me. I decided to keep my feet and went home. 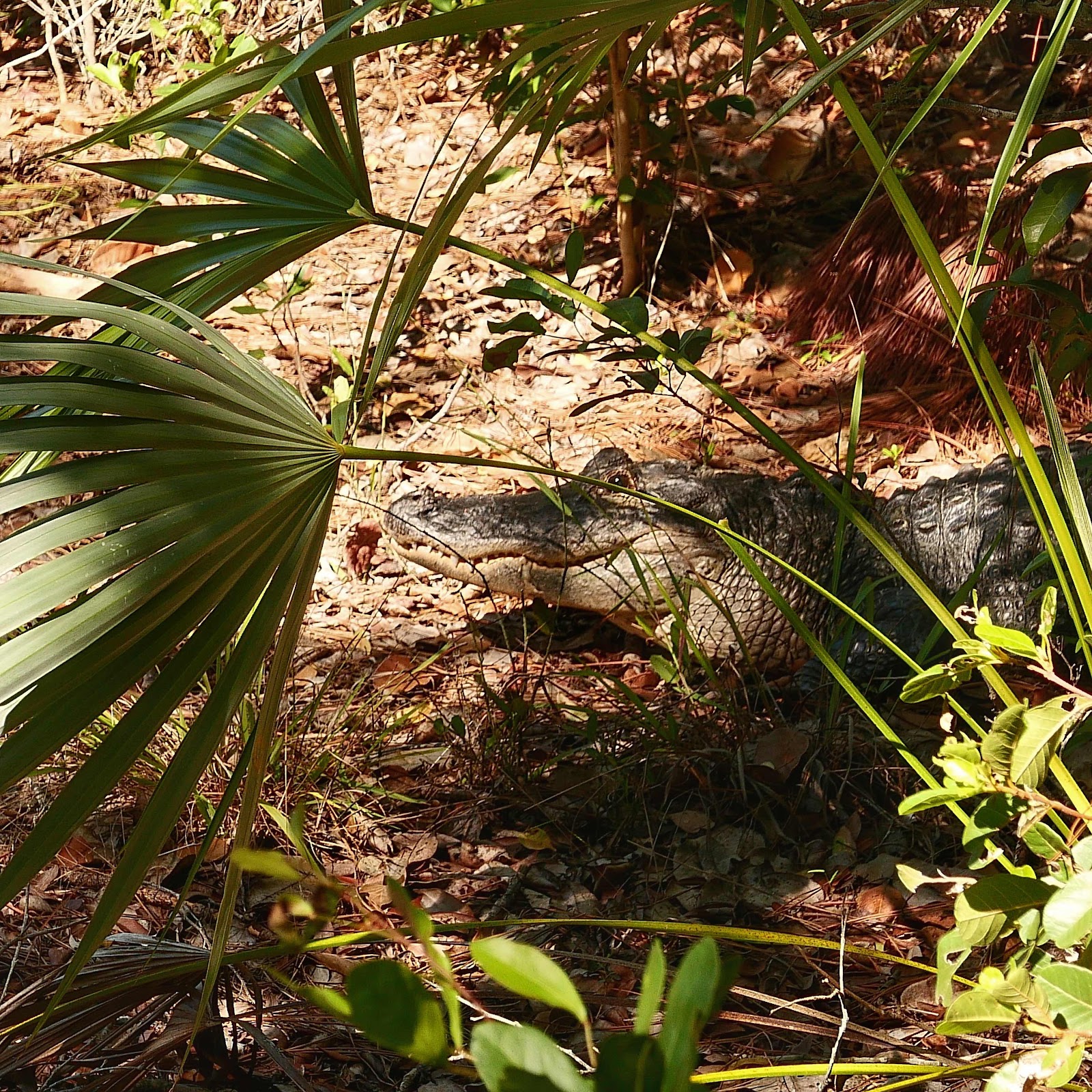