So we don't have great disappointment and unwelcome surprises here is the plan for the next week.  I am flying to Iowa Sunday and meeting my new scooter. I will post updates as I go, sporadically I am sure, as I ride home and need breaks from time to time from the business of riding. My iPad is now a mobile device thanks to my new Smartphone hotspot so I can upload pictures at my wildest whim. Blog content about the Keys will resume next Sunday or Monday or thereabouts. In the meantime for those needing pictures I recommend using the Search function at the top left hand corner of the page. Enter the name of a street, event place or thing and the search will render some truly inspired results. Its looks for any word in any of the 2815 essays published on this page since June 2007. Between now and October pictures and stories will be about my travels across the wilds of the Midwest on a 33 year old 200cc Vespa. It may be more interesting than I'd like.

Like I say, it is an adventure as the outcome is unknown. The journey up consists of two, two-hour flights. The journey back should take a week.
Posted by Conchscooter at 6:00 PM 8 comments:

It is a harsh fact of life about Key West, irrefutable and harsh, that the cost of living is high. It's hard to impress upon incomers how much money one needs to make it in this island society and even the stark numbers don't always make the reality clear to some wide eyed dreamer who wants to move to "Paradise."  Consider how much it costs to move into an apartment. A modest one bedroom will set you back around a thousand dollars each month for nothing very fancy at all. First last and security deposit alone requires you pony up $3000 then you will need to secure utilities and live for a few weeks while the job situation sorts itself out.﻿ And all that is assuming you find somewhere to stay in the first place. The reality of renting is that in winter long term visitors will happily pay more than you for a short term lease. Is it any wonder the majority of people who fill the 140 mattresses at Keys Overnight Temporary Shelter are described as the "working poor." 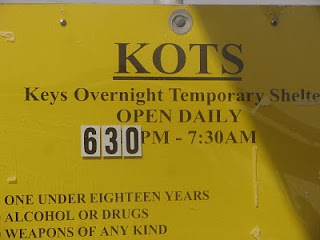 ﻿A working agreement between the city and the county and the Sheriff's office created the shelter and costs the city $400,000 a year to provide humane facilities where people can wash and sleep in relative safety though not exactly comfort. It's spartan and carefully run and it's future is in doubt. 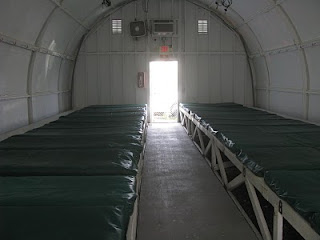 Reverend Steve Braddock has been a firm consistent advocate for the poor in Key West and his role in KOTS came to an end suddenly a few months ago when he announced he was pulling out of the contract. The Southern Homeless Assistance League stepped in and now they too plan to pull out by the end of the year. Kots is proving toxic to local providers. The situation probably hasn't been helped by rumblings of discontent from condo occupants in sight of the shelter at the Sunset complex next to the marina on Stock Island's College Road.They are trying to maneuver a lawsuit claiming Kots didn't follow the strict development guidelines imposed by the city on the condos. Steve Braddock, pictured below when i went to a KOTS open house, decided he'd had enough of dealing with the city's lack of leadership. 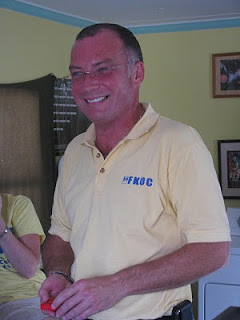 City leaders are as usual saying nothing about the chaos in homeless assistance and telling people not to worry. At the same time lots of organizations, even ones outside Key West are ready to get involved. There are apparently people in Miami who think the Kots budget is worth getting their hands on. Hmmm, I wonder why? The thing is, if Kots were to close it would send a flood of sleeping people onto Key West's streets which residents would get totally up in arms over, yet the grumbling about spending money on the homeless never ceases. With the departure of Braddock the sense of sainted selflessness in the running of Kots evaporated. He was upset the Southernmost Homeless Assistance League, SHAL, started a hands-on program to take over where he abruptly withdrew. SHAL's role is supposed to be disbursing grants and charitable funds to other groups and Braddock saw their direct involvement as an incorrect reading of their charter. His opposition has grown into a drive to remove SHAL from leadership operating Kots. Terribly laudable yet it will now leave all of us to deal with the purists' problem of who shall we have running Kots? City leaders blandly asserted to the newspaper that there is no problem, nothing to see here, move on everyone. The city budget is starting at last to show signs of stress in our shrinking national economy. Raise taxes? Hell no! The million dollar gap is to be closed with increased parking charges (and fines I suppose) of all things. It sounds like a plan designed to offend no voter, and unlikely to work. Closing Kots would help close the budget gap. However that would leave a legal problem likely to piss off many more voters. Under Florida law it is illegal to ban public sleeping at night unless the local agency offers a secure humane alternative. Without Kots, parks and beaches and dark street corners will fill with "sleepers" and no law enforcement to move them along. 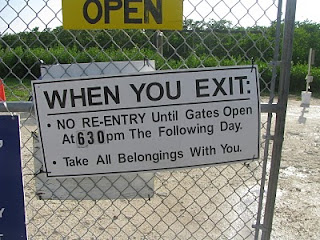 It may very well be true as the hopeful insist, that the economy is getting better, but the realists, and I count myself among their number﻿ wonder if the improvements seen and predicted are just window dressing for the election. I believe President Obama has proved his worth to the one percent and his re-election is thus guaranteed. That Mitt Romney is hopeless doesn't help the cause of two party representative politics and it's electoral facade. So, if the economy stays in a tailspin and poverty doesn't miraculously get eliminated in upscale Key West the situation for the local working poor won't get any better. It's been said before but it's worth thinking about anyway. A tourist economy like Key West's only operates because menial tasks get done by people willing to work several jobs with no health insurance for the chance to live in "Paradise." How to raise the thousands to get a roof over one's head remains the problem. And no one cares to seek a solution to that fundamental problem.

The thing is there isn't much dirt in Key West and in this town longevity does have it's privileges. The longer one lives here the more chance you have of being able to hang on. Some people express this equation by showing disdain for new arrivals, or anyone with less time "on the Rock" than themselves. This scramble to hang on to one's place on the slippery rungs of life in Key West is decidedly not laid back, and it is decidedly hard to break through, even for people who come to town well funded and ready to work. Longevity breeds respect.

People ask me about moving to Key West, just one more piece of advice I am reluctant to give. I see many many people come to town bright eyed and bushy tailed and convinced that they are on the right path, yet the path is so thorny they frequently give up. I surprise myself when I recollect how long I have been coming to key West and how easily my wife and I slipped into our lives here at the turn of the century. However I have a history of not being seduced by Key West's siren call, so in a way I eventually allowed myself to be seduced into living here, not exactly against my will but not exactly embracing the place whole heartedly. To some degree I have retained a slightly sceptical approach to living here. I am aware of the shortcomings and I observe the contradictions with what I hope is a clear gaze. I am also very much aware that what works for me today may not work tomorrow. Change is a constant.

And through all the daily tedium of repetitive middle class life there is Kots, just out of sight, but a constant reminder that the ladder is slippery and the fall into poverty is a short one for all of us. Little wonder recommending a new life in the Sub Tropics is not part of my agenda.
Posted by Conchscooter at 12:00 AM 11 comments: