One thing I try to do with my blog is record the passing of time, or the way things look and what we take to be "normal" today that may be odd tomorrow. I also try to use my camera to take a look at things that otherwise I might not notice. Public phone use, there's something not easily grasped if you were teleported from life 20 years ago. 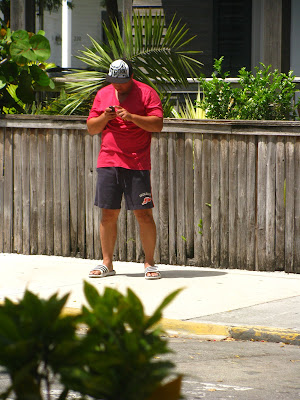 So what's more stimulating, the Cypress House repository of lived-in history right at his back or some 139 character message from someone else wearing their headgear sideways? Had he looked up he'd have seen a sight not often noticed on Key West streets, a cyclist with intent. She rode a ten speed and pedaled easily and swiftly like someone with a destination in mind. 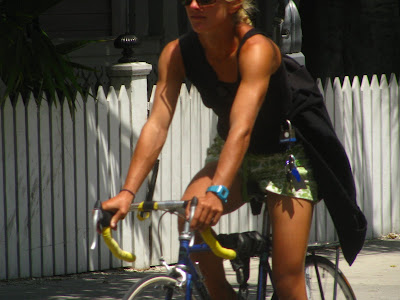 A beach cruiser she was not. He was: 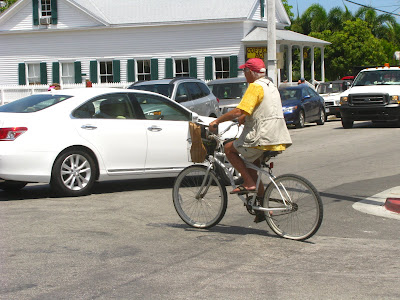 The open space where Jabours Trailer Park was; and it remains open and unused though not protected by silly signs. Schooner Wharf bar in the background. Under the development plans that came to naught, some feared noise (aka music) from the bar would annoy the new upscale neighbors and lead to it's closing. Not so far! 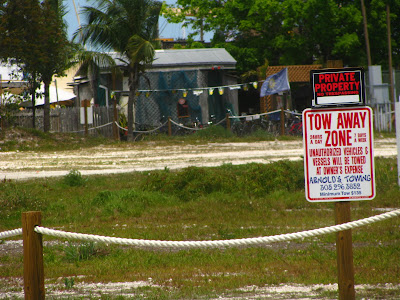 A Yamaha XS100, the super bike of my youth seen here in ghastly cruiser garb. I saw lots more older bikes around Key West this past winter. I hope rising gas prices bring more old machines onto the streets. See Chuck on Fleming if you have a free wreck ready for restoration. 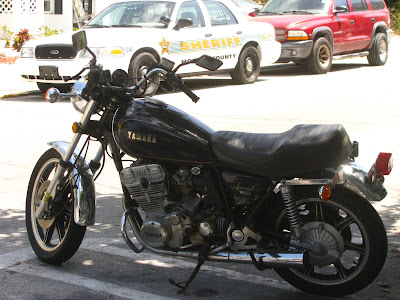 It must get annoying living on a street where visitors feel compelled to steal the street sign. Here Cheyenne stands next to a home made sign that reads "Donkey Milk Lane" according to The Streets of Key West this was a place where the owner of a donkey sold milk supposedly. 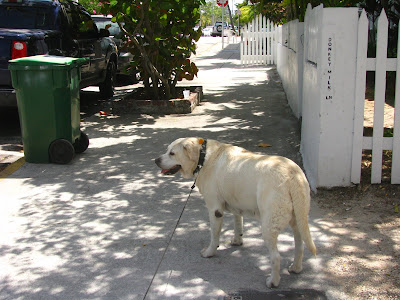 Tourists feel compelled to steal the sign to take back home to their blandly named streets Up North. Sucks to be you I guess if you have to steal interesting street names to spiff up your life. 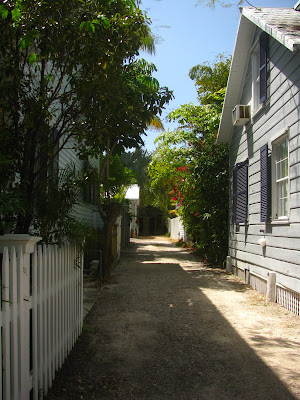 I thought I did an essay on Donkey Milk but I can't find one searching my blog so I guess one will appear soon enough. Doing laundry seems tough enough at a public laundry but to have a busy child in tow makes it much worse. She did not seem the least bit phased. 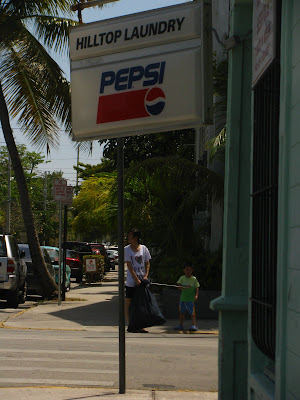 It just goes to show how narrow minded anyone can be but I had never previously considered putting a scooter top box on a bicycle. Yet here one is: 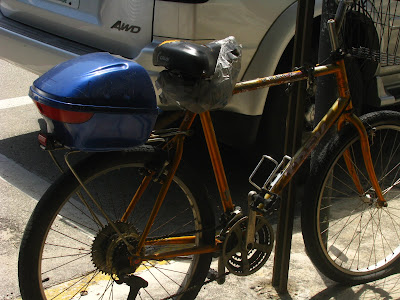 Millions and millions for the wreckage you see before you. Who's going to loan you the money? A bank too big to fail? I think not. 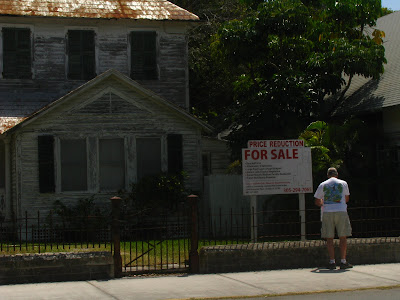 I am predicting prices even here will have to fall a good bit further to find bottom. Realtors disagree. Some people make do with no home at all and take up temporary residence in a church flower bed. 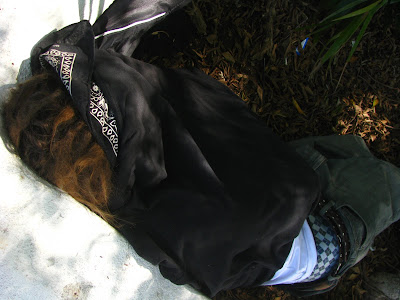 Nice checkered underwear too. One gets the feeling sometimes that Prohibition was not a completely bad idea. In this next picture what you have is a pedestrian caught in the act of crossing Eaton Street against the light and getting caught by a car that had to slam it's brakes on. Do you see the resentment in his eyes? Better perhaps he should have got knocked over to learn the lesson. 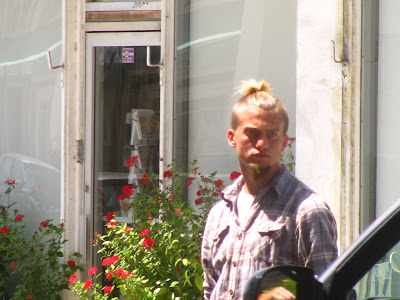 Just another reason I try to avoid downtown during busy winters. This next one is a man in a million who stops to answer his phone even if he did leave the engine running while he chatted. 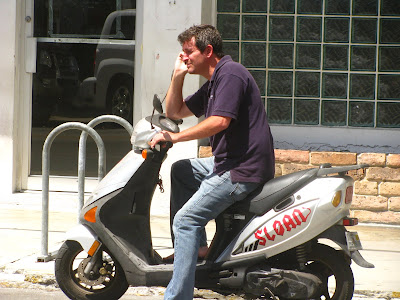 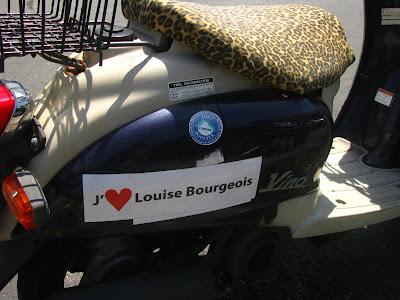 I have no idea but perhaps the message is simply that the owner of the scooter takes exotic vacations. 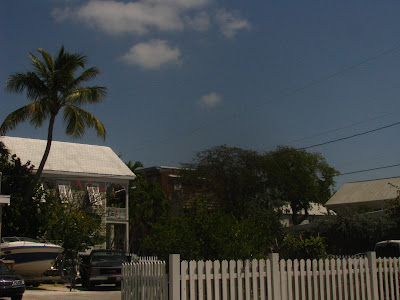 Summer is coming and with it much needed rain. 85 degree days and 75 by night with still a light cooling breeze. This is the best time of year in the Keys. 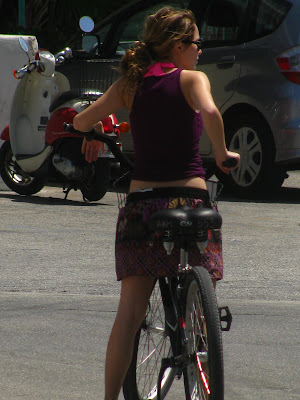 Fausto's claims to be a social gathering spot as well as a grocery store. This is the Fleming Street store just off Duval. And they will tow if you dump your car in their small lot. 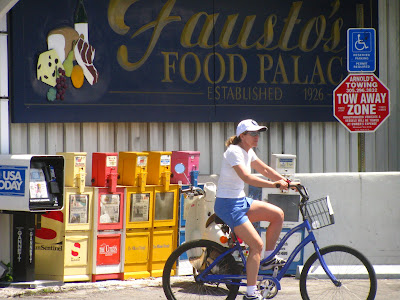 There were a lot of cyclists out with myself and Cheyenne. 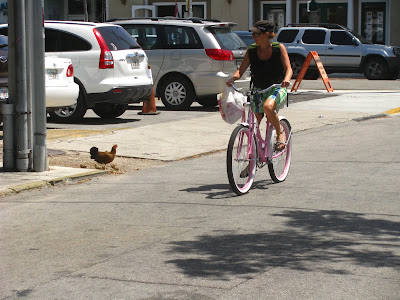 Key West: small town America the way it was meant to be.
Posted by Conchscooter at 12:00 AM No comments: