My wife decided to celebrate the first afternoon of her two week Christmas teacher's break by seeing a movie. Rumor has it the mainstream Regal Cinema in Searstown is bringing back its  four screen emporium destroyed by Hurricane Irma's  rain in 2017. There it sits mouldering away with period movie posters hanging in their frames and paint peeling horribly while, as we shall see the art house Tropic on Eaton Street is taking up the  slack quite heroically. 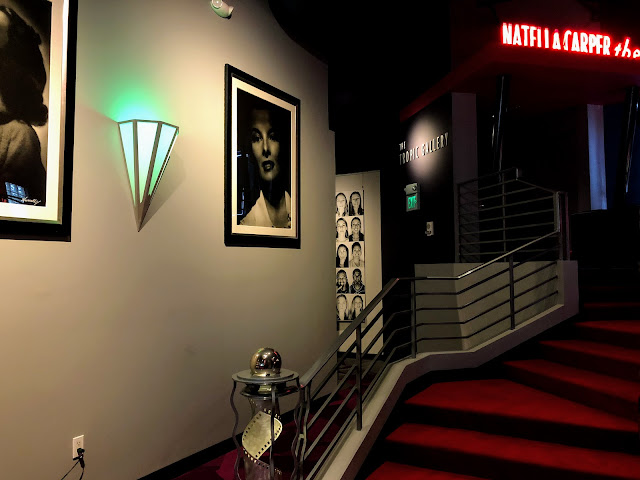 But, after you get your ticket validated and before you get into the the screening room there is a corner of the theater devoted to Art. I've seen some cool stuff here and this latest exhibit is worth a  stop on your way to see a movie. It's not obvious but is in the back entrance to the main "Carper" screen. There are no words describing or explaining  the  exhibit which took me aback until I remembered I had Google in my pocket. 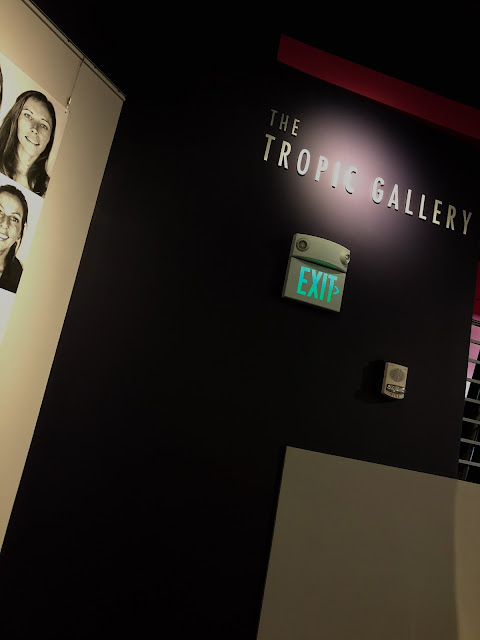 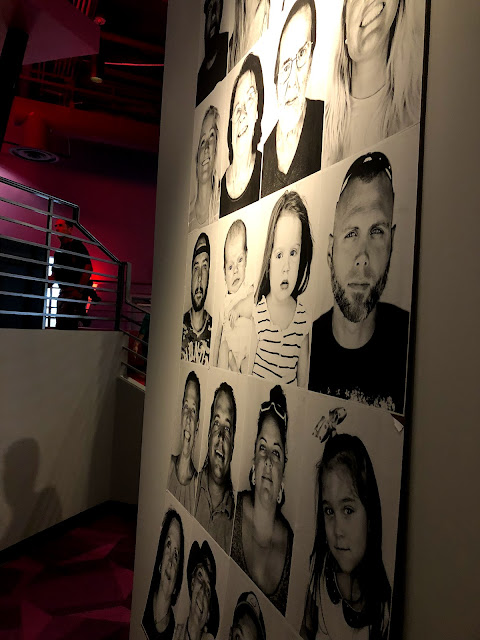 It turns out an enterprising Key West photographer was looking for people to photograph according to his Facebook page, about the time I was in the ICU starting my path to recovery from the wreck.  Let's be clear, no way would I want to be in a gallery like this but I love the initiative and the fact he collected 1100 faces is extraordinary. Apparently the exhibit opened at the Studios of Key West (of course!) October 4th and it has migrated here, where, now that I am walking with a walker frame I got to stump by coming and going to Mary Poppins Returns. 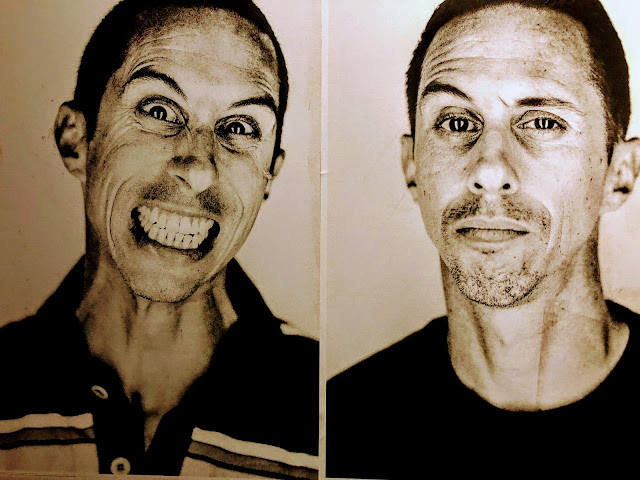 I thought I recognized possibly one friend I know and one public person -Mike Mongo, he of the upside down glasses- in this reduced collection on show. I was quite surprised I didn't see any other familiar faces.  Actually I wasn't sure where the faces were from at all until I noticed some logos on the clothing and that gave me a clue that at least some of the subjects were local. That highlighted a major drawback for me. 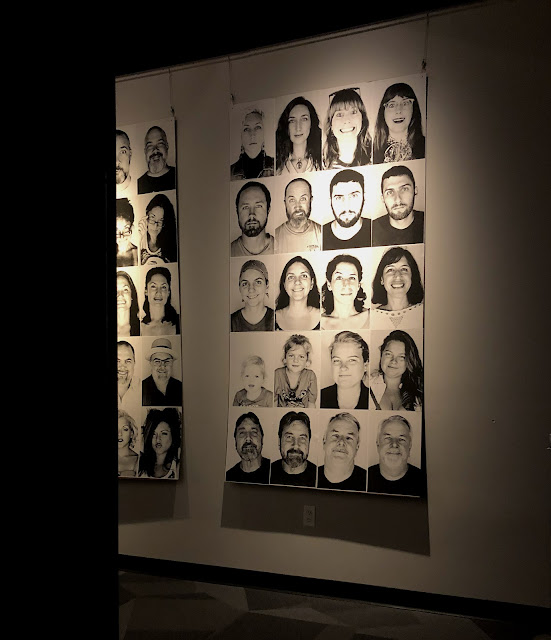 Perhaps originally there were names or biographies attached to the pictures but if they are simply a series of shapes and smiles and grotesque expressions as shadows and shapes, then I find that diminishes the impact a bit for me. I am, it must be obvious, nobody's idea of a portrait photographer and aside from not being very good putting people at ease the tedium of collating stories with pictures is not very easy for me either. Hence the lack of people in my pictures. 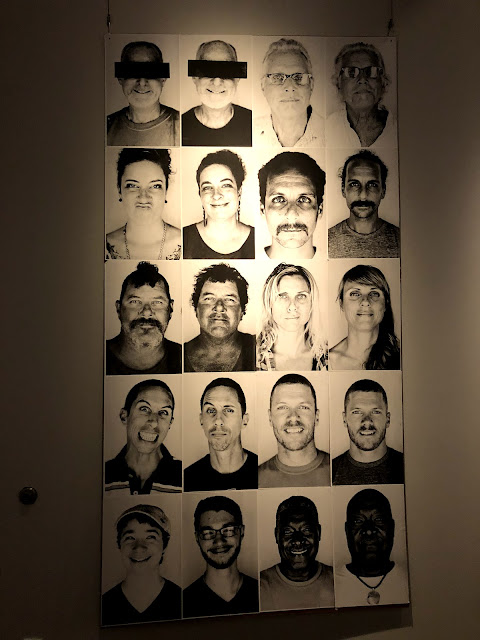 "Heads Up Key West involves hundreds of black and white portraits of over 1100 locals from 2013 and 2018, photographed by Tom Flip Photo....
These photos “capture the real, raw, and compelling characters of Key West” 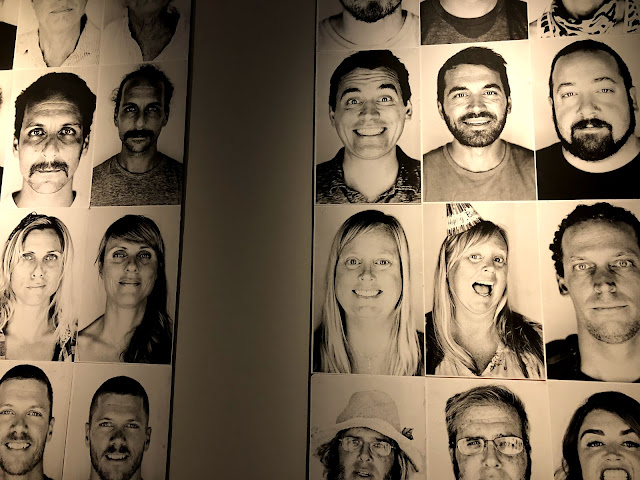 I'd love to see all 1100 of them. You can get lost in a brilliant exhibit like this. My only question is how do you see it if you aren't going to the movies? 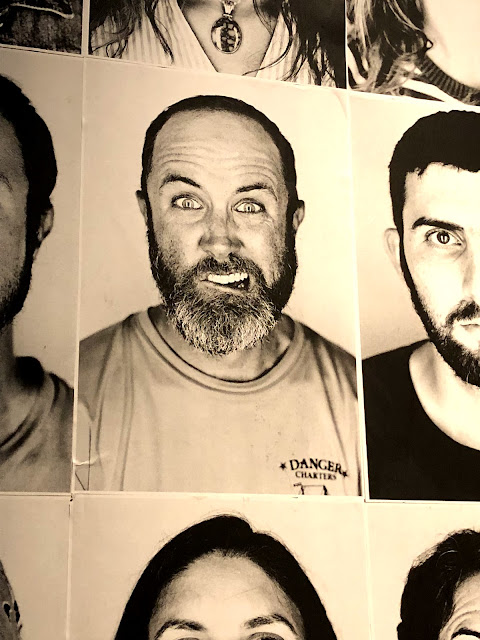 The Studios  says the photos also show changes  brought about the passage of five years: Thomas Filipkowski revisits his popular 2013 project, Heads Up Key West in which he photographed 600 faces from the community. Then and Now illuminates the changes caused by time and circumstance, providing a clear-eyed look at ordinary people coping with the reality of what it means to live in paradise. 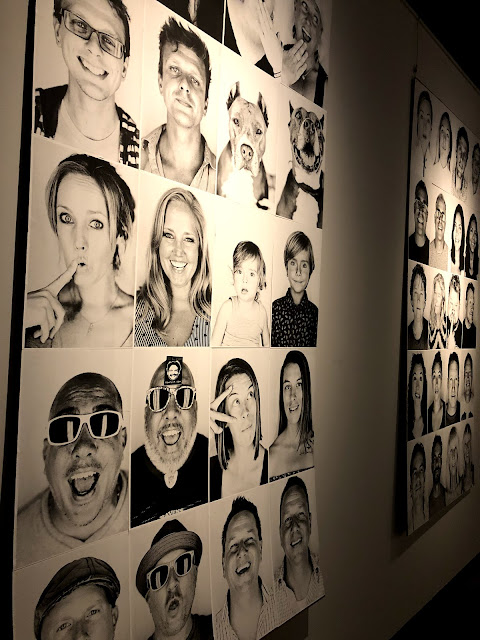 This is great stuff, highly recommended as you really can't see the depth and clarity of the pictures on my tiny reproductions which I hope have given you an idea of why these pictures are worth visiting. 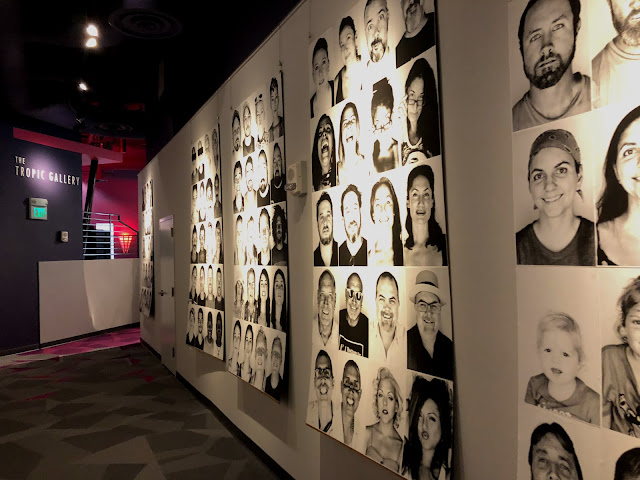 I hope they are still here for the next movie I go see. On that note I had a funny moment in the loo. I was ready to leave and a guy moved to the sinks effectively blocking my exit while he paused to figure out his hand washing routine. As he got going I sat in my rolling walker and announced" One good thing about being a cripple is you take your seating with you." No reaction so I sat and watched him ponderously wash his hands and waited for him to clear out and release me.  I've noticed much more unfriendly behavior since the snow birds came back, in the supermarket and in other public places. It's  quite surprising how obvious the lack of manners and public good will is to me, the handicapped. Doesn't make me keen to be handicapped where they come from, thanks. One more reason to love the Keys, in my opinion. 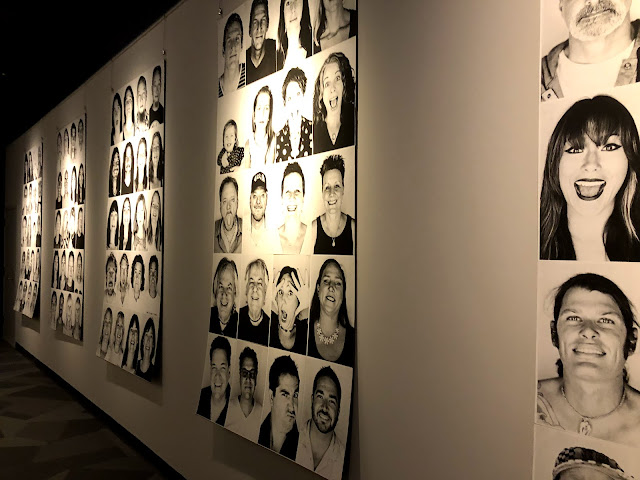 Mary Poppins Returns was a nostalgic  romantic movie, a reminder of cartoon cinema from half a century ago and I wonder if younger movie goers will relate to the cartoon imagery that was reminiscent to me of stuff like Fantasia and those droopy goofy characters. I liked it a lot actually though there wasn't much plot at all and it tended to drag a bit in the middle. Sweet ridiculous movie. Enough said if you're  sixty years old and you recall the joy the original brought you.  I will say I remember The Sound of Music  more fondly with all those amazing unattainable young teenage girls to entice me to dream when I was twelve. Mary Poppins in her original incarnation was quite severe. 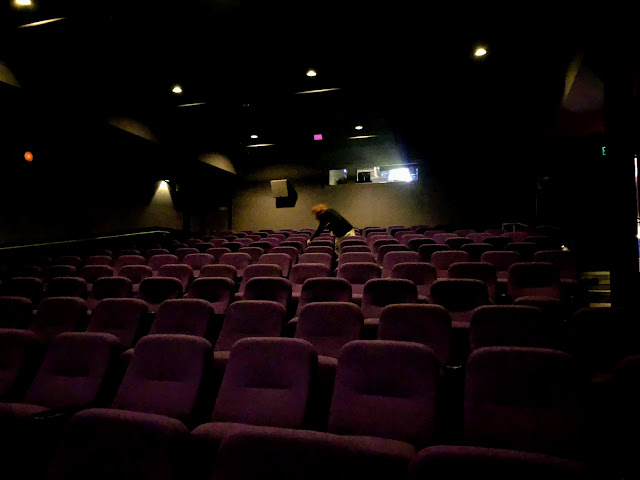 And as for the Tropic...The sprucing it got recently has made a great difference, nothing revolutionary, no big changes hit the eye but it just looks clean and nice. Good job and I'm looking forward to going  back. 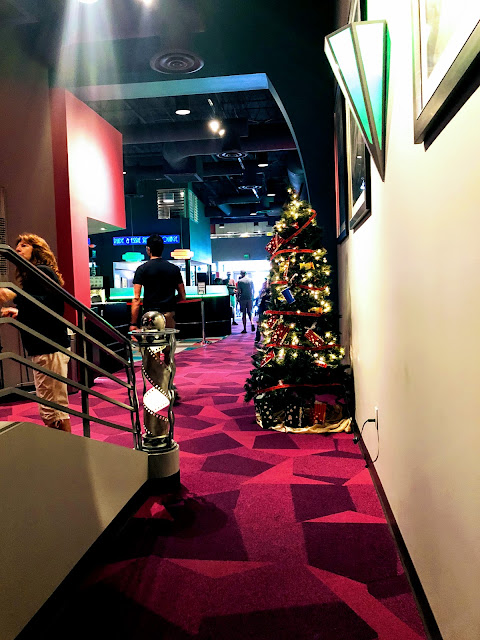 I hope the Regal gets a move on and comes back. I have no doubt running popular movies has made money but in my own selfish way I'd like to see more Arts productions and fewer crowd pleasers but I also want the Tropic to continue being a success so I'd better shut up. 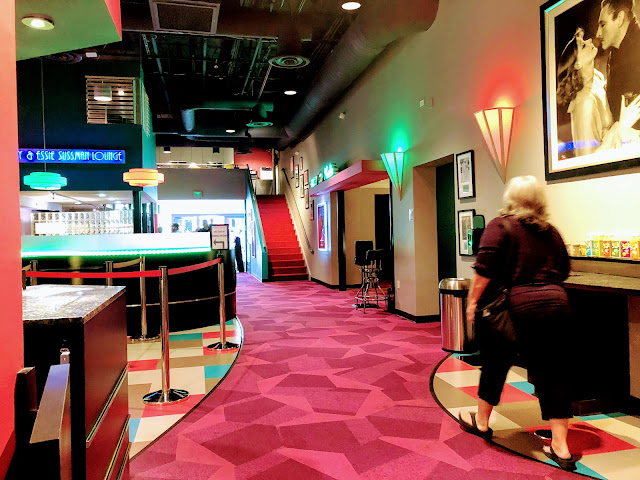