I posted this essay in June 2010. I can hardly believe it was eleven years ago. I've added the few lines dedicated to Sandy Cornish's life from Wikipedia.

Sandy Cornish (1793–1869) was an African American farmer, businessperson, and civic leader in Key West, Florida. As a former slave who had purchased his freedom, he publicly maimed himself to prevent being returned to slavery.

Cornish was born a slave in Maryland in 1793. In 1839, his master hired him out to a railroad-building project in Port Leon in Florida's Panhandle. The position allowed him to earn money for himself, and after nine years of work at $600 a year, he was able to purchase his own freedom and that of his wife Lillah. However, the papers showing him to be free were destroyed in a fire. Lacking proof of his emancipation, he was seized by slave traders, but managed to break free. The next day he gathered a crowd of onlookers in Port Leon. He loudly proclaimed that, having purchased his freedom once, he would not return to slavery under any circumstances. He then deliberately maimed himself, stabbing himself in the leg, slashing the muscles of one ankle, and cutting off a finger of his left hand, which he proceeded to sew back on with a needle and thread. These injuries made him worthless as a slave and thus immune to recapture. Friends took him home in a wheelbarrow, and he eventually recovered his health.[2]

Around 1850, he and Lillah bought a farm in Key West, in the area that is now Truman Avenue near Simonton Street. Selling vegetables and fruits to local residents, he became one of the richest people in Key West. He was a leader of the local black community and the founder of the Cornish Chapel of the African Methodist Episcopal Church, now the Cornish Memorial AME Zion church and chapel, which still stands at 702 Whitehead Street.

He died in 1869 at the age of 76. He was buried in Key West Cemetery, but the location of his grave was lost to history. In 2014, the cemetery and the Historic Florida Keys Foundation installed a plaque to his memory. Speakers described his life as an inspiring testament to human freedom. City Commissioner Clayton Lopez, presiding over the ceremony, said, "His actions in life show that he was not going to accept the fate developed for him by lesser men. He is a legend that continues to point the way to human dignity to this day."[1]

As you scroll down this essay you will see a prevailing color- gray. It's an illuminated gray offset by white and backed by blue sky but this lane is lit up by a summer sun. It was hot out there. 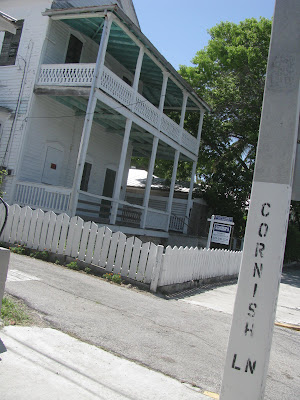 Cornish Lane is another of those little colons off the main street... 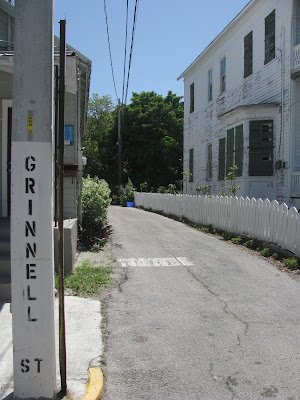 ...and easy to miss unless you are a Labrador with an inquisitive nose. 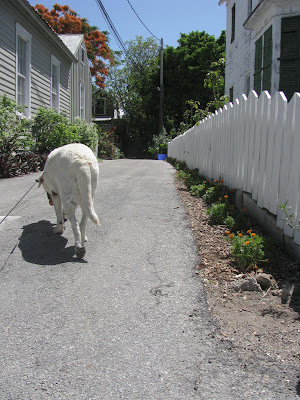 Splashes of color come from natural things and this to me is the joy of living where the sun is bright and hot- everything is in primary colors. This is not the land of fog and subtle shapes and dimly seen landscapes. 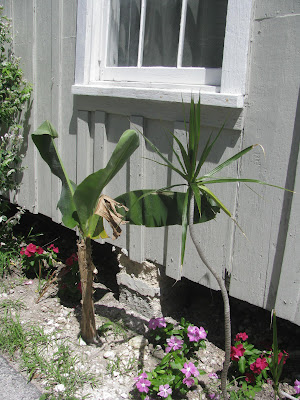 Even the Conch Train provides a lump of yellow as background as it passes down Grinnell Street toward the west. 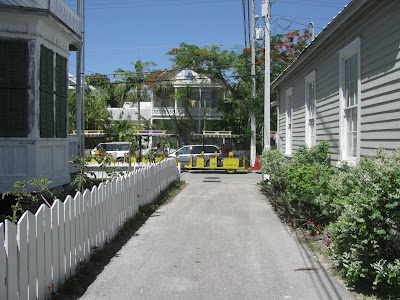 World travelers come home to roost and bring their dust catchers with them. 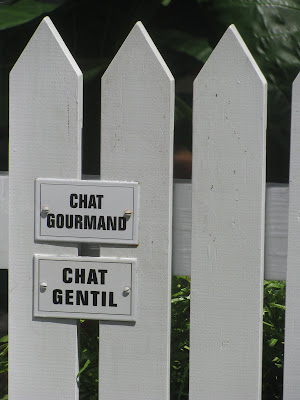 Perhaps they are French Canadians with a winter place in the sun, or perhaps they spent a long wet weekend in Paris, city of gray skies and wet sidewalks. (Remember, Nowhere Is As Wonderful As Key West, wannabe Conch). Especially Key West under construction. 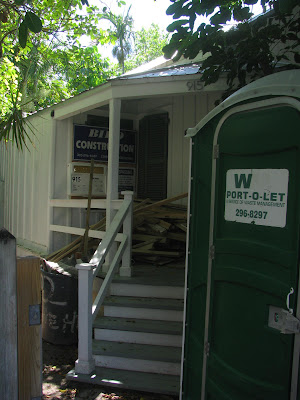 I have seen a few homes actively under renovation around town which seems as though someone around here believes the economy is getting better. Good for them and may they keep spending, right? 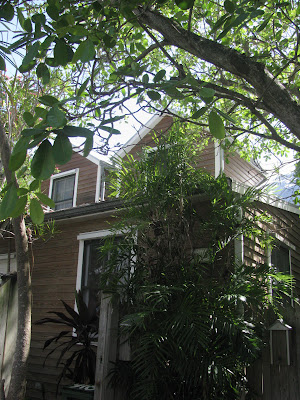 Cornish Lane is named for Andrew Cornish known to his contemporaries as Sandy, according to J. Wills Burke's superb The Streets of Key West. He says Sandy Cornish was born a slave in the 1790s, and bought his freedom with his wife Lillah in 1839. Then God, in a mischievous moment intervened and the documents witnessing Sandy's freedom got destroyed in a fire and back Sandy went onto the slave auction block in New Orleans. Eventually Sandy escaped and cut himself up to make himself valueless as a slave and he and Lillah lived happily every after on the fringes of "civilization" (the Confederate States) selling fruit and vegetables with his wife Lillah in Key West. All's well that ends well. 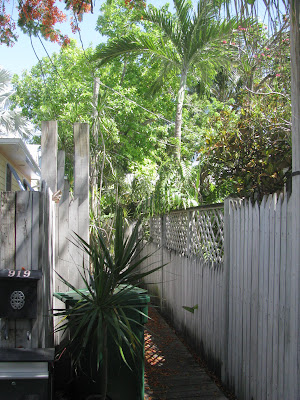 So Cornish got a church named for him on Whitehead Street and a lane here in the outer 'burbs of Old Town. I love the decrepitude of Key West, a city where the elements conspire to restore the natural order of things. A plank after all is just a shaped piece of wood. It doesn't actually have to do anything. 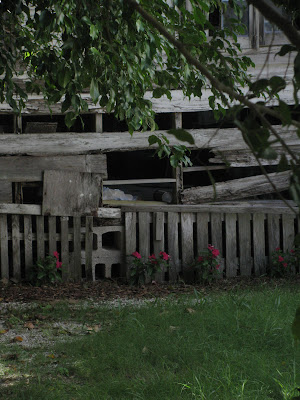 Tourists are frequently told that Key West homes were built from scavenged ship's timbers by wreckers who salvaged what they could off passing ships that landed accidentally (we hope) on the reef. It sounds romantic and it looks lovely. To live in? 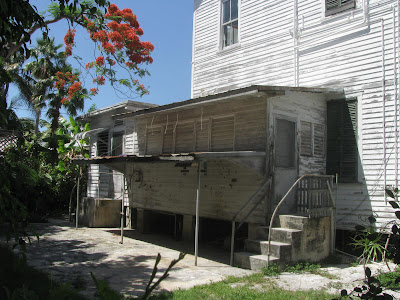 I grew up in old homes and know intimately how complex systems in elderly stages of failure can be. I like modern conveniences and yes I know all about carbon footprints. Sigh. 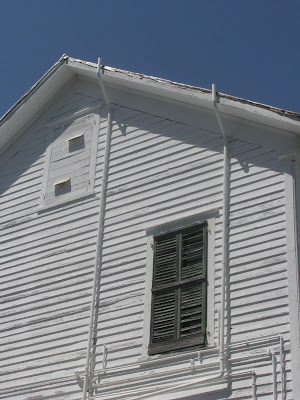 I don't like photographing modern ranchette homes unless it is to tack on a tart comment. This stuff looks lovely but I don't want to live here. 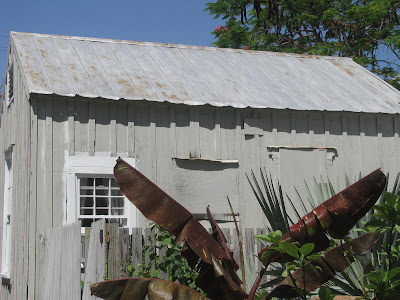 Got foundations? Hell no, we don't need no stinking foundations! A reminder this is a home in 21st century America. Can we please protect it because happily for us all there are people who not only like looking at these places but want to preserve and use them as well. 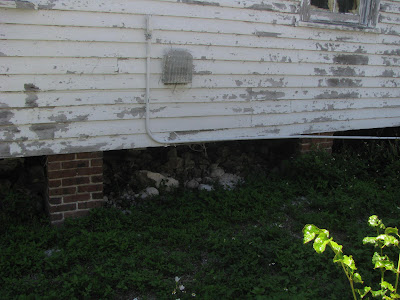 They feel to me like old wooden boats. I love to look at them and enjoy seeing them around but ownership is not for me. 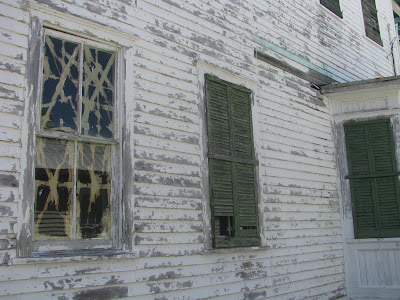 This is blue sky, a daily Key West event. 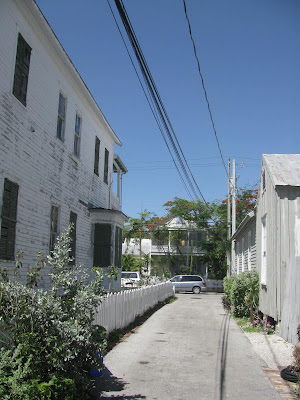 this is an exhausted Yellow Labrador. She too is a daily event in summer when heat at sidewalk level is not dog friendly. 15 blocks and she's panting, so a slow stroll on Cornish Lane was an excellent way to end the stroll. 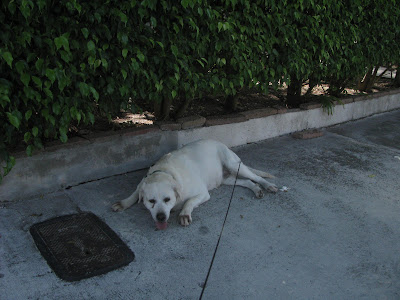 Two more blocks to iced water (princess does not enjoy warm water, it turns out), and an air conditioned car.
Posted by Conchscooter at 12:00 AM 3 comments: