I was bound and determined to eat one meal at the closest thing one could describe as a Jewish deli before we left New York, the city that has a long standing vibrant Jewish-American history. It's brought out the worst in people too, Harry Truman famously described it as "Kiketown" while he was stationed there prior to going to fight in Europe in World War One. And then after World War Two he became the strongest champion of the creation of the Israeli state overriding British objections. They say the reversal happened because of his revulsion at the Holocaust and his belief the Balfour Declaration was a British commitment that had to be honored. Had he just tried a knish from a deli like Jay and Lloyd's he would have understood the need to promote Jewush culture as a good thing. 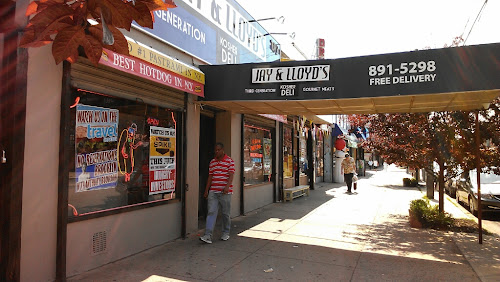 Jesse Jackson another Democrat running for the presidency was caught calling New York "hymietown" in the 1984 electoral campaign. It's odd isn't it how everyone rushes to deny their bigotry yet there it is, under the surface ready to pop out at the most inconvenient time. I've been married to a Jew for twenty years and most things I've seen make me envy American Jews those several quirks that I have seen in action. Jews don't proselytize, they don't do missionary work, they don't beg people to join their religion. Brilliant. There is as far as I can tell no unified theory of life after death, heaven or hell. I can't get much of a straight story because these imponderables seem to be a matter for private concern which is also brilliant to someone like me who had to learn the Catholic catechism in a classroom by heart as a child. Coming from a torn up family I like the bonds that Jews try to maintain in their families through adversity especially. I like their food even though Italian cooking is better (my wife and I argue that point all the time. It's worse than the World Cup debates), and I've never understood antisemitism. With my absurd logical rational approach to things, hating Jews seems weird especially as you can't identify A Jew by sight. How easy has it been for Europeans to load their baggage on Jews through the centuries and what good has it done them? Hating blacks is easy by comparison, they are a very visible minority for bigots to identify, and just as senseless. White Americans have hated blacks and despised them and enslaved them because the Bible endorses slavery they said, all while expecting their subhuman slaves to do superhuman labor in appalling conditions that their white owners could never manage. Acknowledging that all men were created equal while enslaving a segment always seemed an odd basis for a free nation. So I acknowledge the universal prejudices, write them off as absurd, and eat the food to find truth through dining. Soul food? Yum. Jewish deli food? Yum. If Hymietown can produce food like this Jesse Jackson should have felt lucky to be here.
We woofed down the coleslaw and pickles as we waited for our sandwiches. This really is the best coleslaw ever. 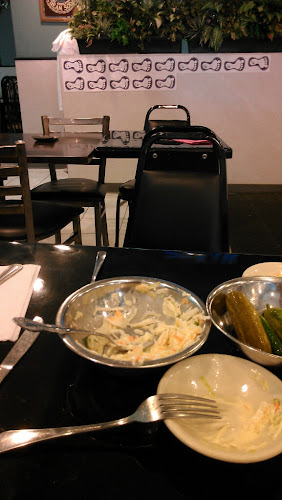 At the entrance there was a sign Come in, so neither of us starves, which sense of humor hits my funny bone with its essential truth, and thus creating a bond between diner and restaurant owner. Corny humor is everywhere...shtick. I find it interesting to see how white Americans take their slang from African Americans, the segment of the population most reviled and stereotyped by whites. Jewish culture is just as American as jazz is American music and just as reviled by those that read Jewish authors and laugh at Jewish comedians (Seinfeld?). I think of the great American novelists of the South, also a cultural paradigm reviled by those who don't live in Dixie, in the land of Faulkner and Williams. The South is the repository of human paradox in America, home to contradiction on an epic scale and thus fascinating. There is a tremendous need in humans to despise those who feed our needs. It is unattractive, potentially deadly, and another reason I love my dog! 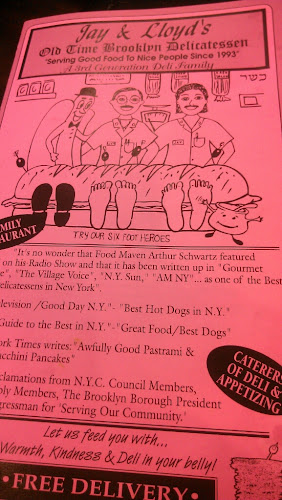 My wife had corned beef and chopped liver on rye, delicious she said but why exactly the food was so special, neither of us could say about our respective meals. I don't eat chopped liver which precludes me from membership among the Chosen People, so I had a knishwich, a local invention involving pastrami, sauerkraut and a potato knish, a Jewish delicacy, involving pastry wrapping a vegetable or a meat, or most famously bulgar wheat. The knishwich is a sandwich built on top of a potato knish. Utterly deliciously sinful, except it is a sin in the sense of Puritan Christian guilt tripping not as far as I understand it, Jewish guilt tripping. The knishwich is too good to be true. I can't exactly describe why it was so good but the potato was powdery and buttery, the sauerkraut was delicate and not vinegary and the meat was delicate, crumbly and perfectly spiced. It was too much food but we ate it all. Shame on us.
From Annie Hall, the movie that captured me in my unformed youth:
Alvy Singer: [addressing the camera] There's an old joke - um... two elderly women are at a Catskill mountain resort, and one of 'em says, "Boy, the food at this place is really terrible." The other one says, "Yeah, I know; and such small portions." Well, that's essentially how I feel about life - full of loneliness, and misery, and suffering, and unhappiness, and it's all over much too quickly. 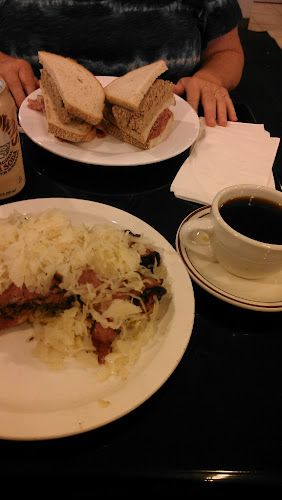 "Yeah I'm one if them" he said when I asked him if he was Jay or Lloyd. He's Jay and I know because I overheard him talking to his staff. In the Jewish tradition of hospitality he made us feel intimately welcome, we two strangers, in his deli. He told us a story of being in Venice, Italy, for the recent Fourth of July and standing in line at an American bar he overheard a conversation between traveling Americans. In suggesting an authentic Jewish Deli in New York, the New Yorker told her interrogator to go without fail to Jay and Lloyd's in Brooklyn. Jay turned around with a gasp on his lips and the New Yorker said: "You know it?" I'm Jay he stuttered overwhelmed by the coincidence. What are the chances he asked us rhetorically. Pretty good I thought to myself, when the food is this good. 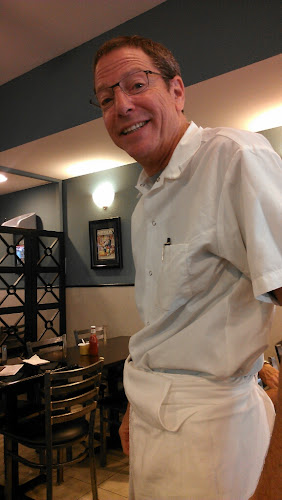 A row of knishes below...spinach, sweet potato, beef, bulgar, potato and something else I can't remember. If you are intimidated by such a deli just ask for the knishes, they are heaven in pastry, all of them. And fruit rugula for dessert (my wife the heathen Jew loves the chocolate). You will do fine eating these pastries and leaving the chopped liver to people who grew up eating such delicacies. New York: home to Jewish liberals, immigrants of all cultures and amazing food, and as we shall see, traffic jams to beat the band. What a city. 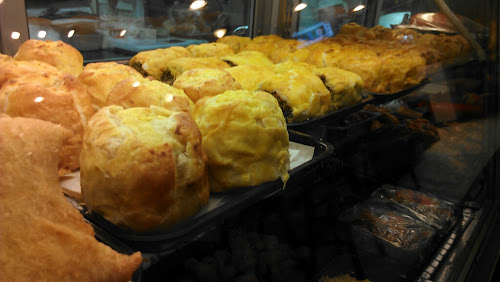 The other place I had to visit in this borough of New York I hadn't seen since I was last there in mid May 1981 to buy a Vespa P200 brand new. I walked into King Cycles plunked down a pile of travelers cheques and two days later I strapped my luggage to it and I took off across America. They don't sell Vespas here anymore, but I remember that day quite clearly and it was surprisingly emotive for me to be standing there remembering the first day of the journey that changed my life. I had hoped my replacement Vespa, the replica of that same machine would have been restored, but the work isn't quite done and the finish date has been pushed back to September. Imagine taking a cab here your third day in a country, climbing onto a scooter and taking off across New York City completely alone with ten grand in your pocket and only one goal: get yo San Francisco by summer's end. Vespa TransAmerica 1981 - ADVrider 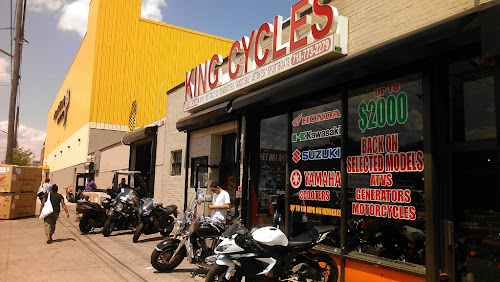 Inside the store I found not the latest Yamaha bikes I'd been hoping to see in the flesh, particularly the 2015 Yamaha SR400 but I did see the new for the US Burgman 200 scooter which I found quite intriguing. It looked small enough to be manageable in town, fast enough for the freeway and very comfortable to ride. A back up plan maybe if the Vespa restoration doesn't work out? This could be quite the daily rider in the Keys. (I ended up buying a lightly used one in Florida in 2018...the restoration did NOT work out!), 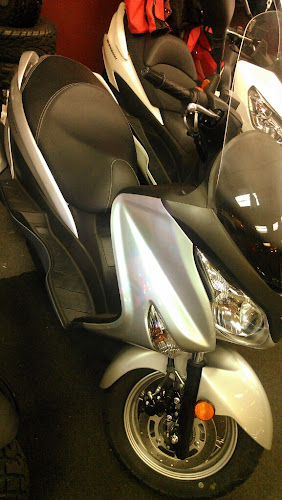 Thus I had lots to ponder as we got in the cash lines to crawl out of Brooklyn to Staten Island, then to New Jersey etc etc...How these people do this every day I don't know. The Overseas Highway this ain't. 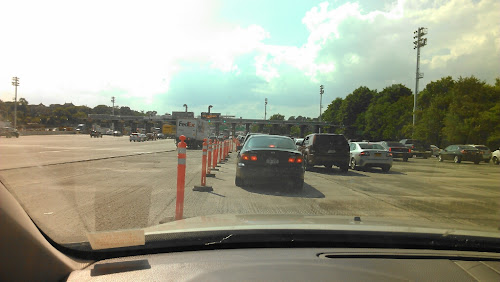 And so we started the winding trek back to Florida.