I had a long standing appointment in Jacksonville to install the last large accessory we have planned for our retirement van and that meant I had to drive the five hundred miles to get the job done. Luckily I am used to early starts and after our usual pre-dawn neighborhood walk I drove away from Rusty... 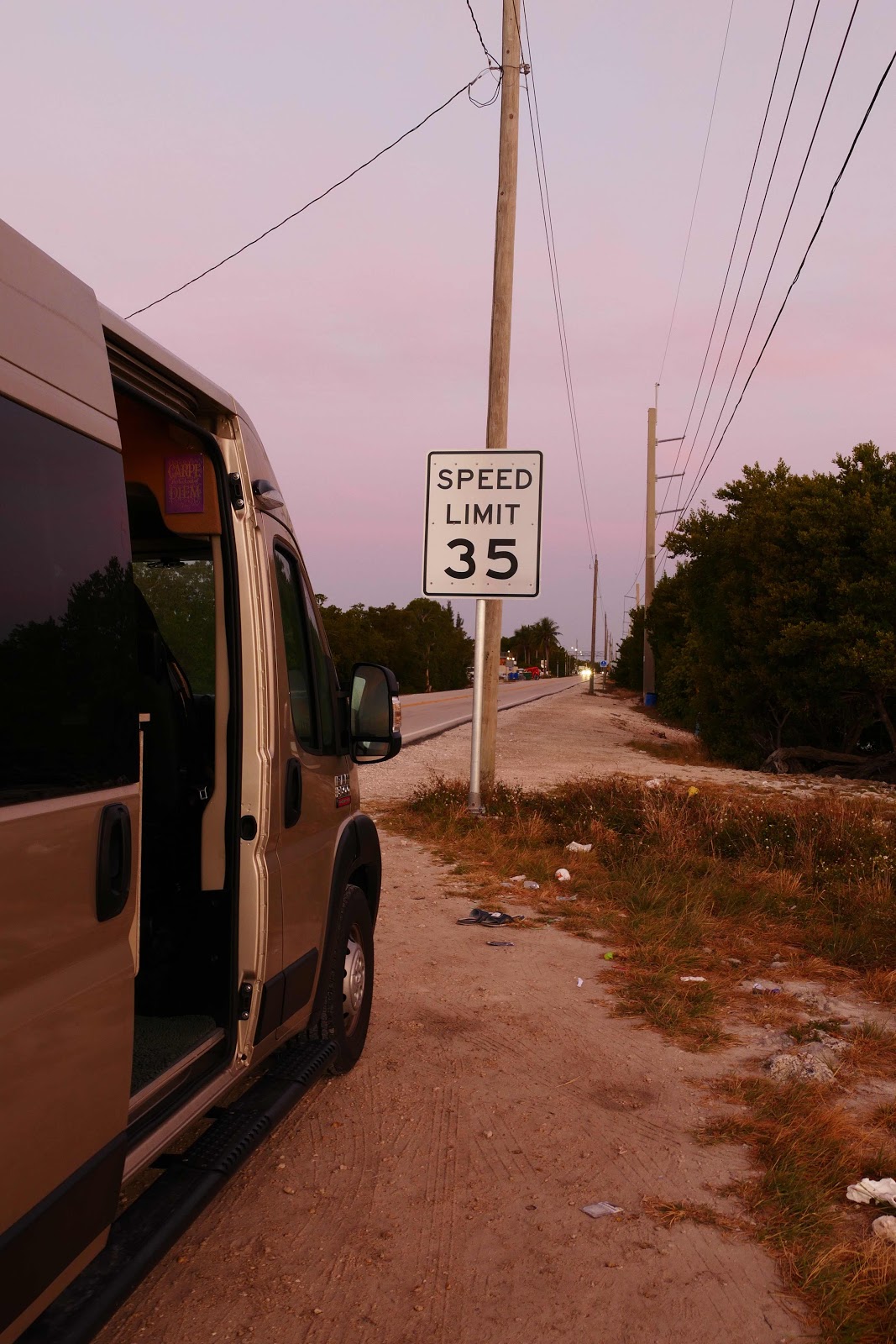 I stopped amid the trash on the approaches to Alabama Jack's on Card Sound Road and started the day as I intended to carry on: stopping for anything worthwhile, including any available sunrise. 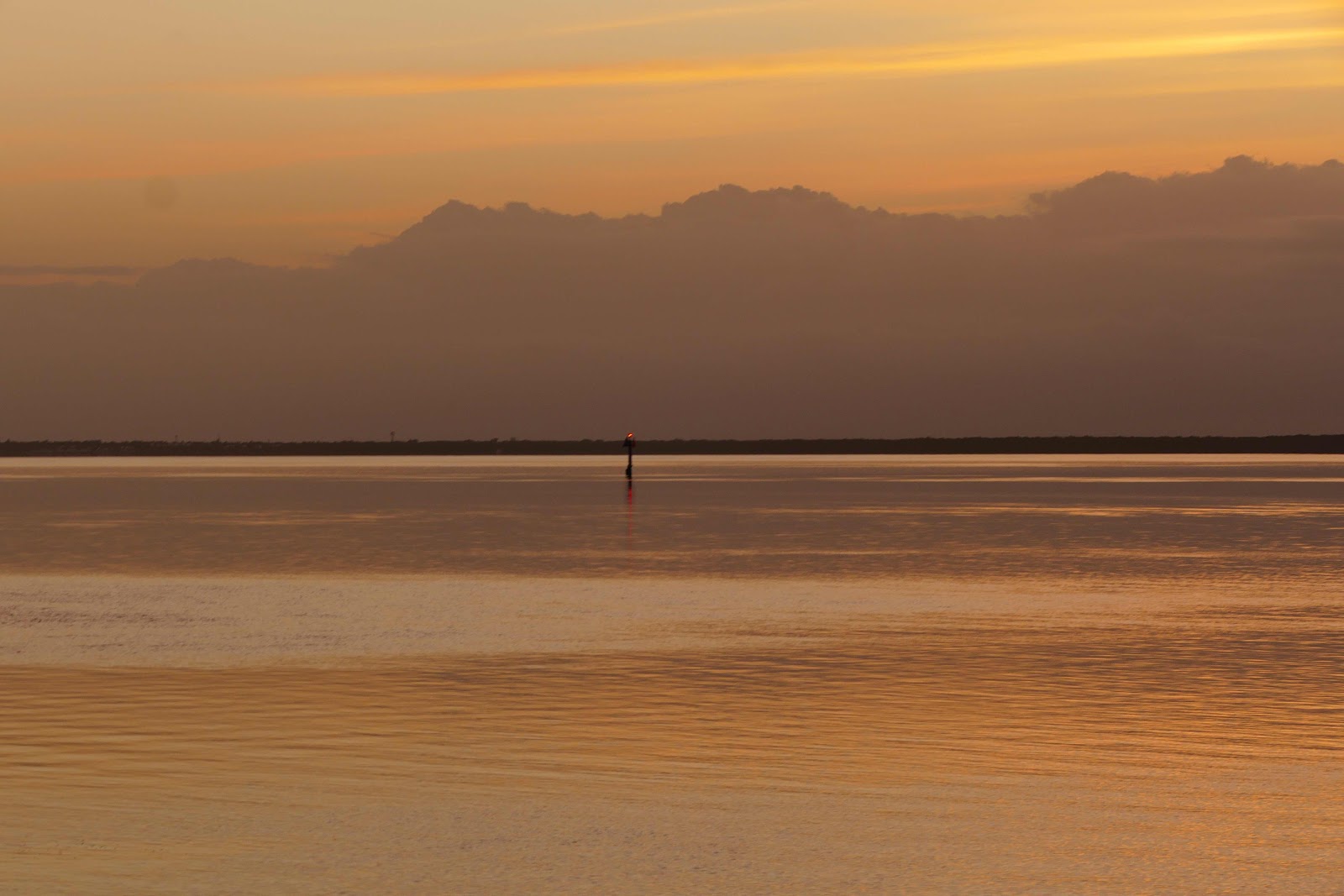 I evaded Miami at rush hour by taking Krome Avenue north out of Homestead, which is now four lanes and quite busy itself, and then droned up Highway 27 to Lake Okeechobee through the sugarcane fields. It's the season to be turning cane into sugar converting the Everglades into a scenic industrial hell: 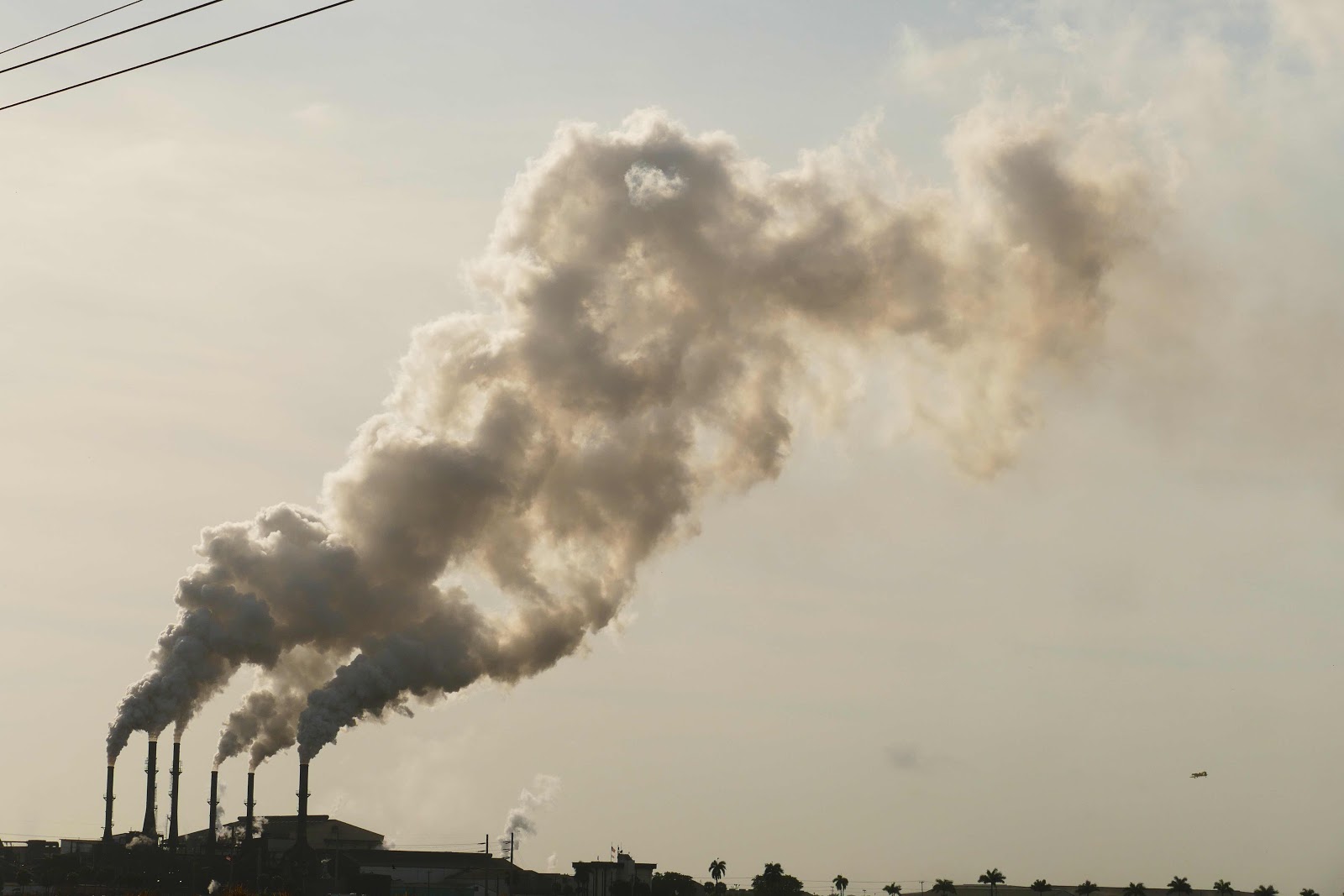 Sugar cane is an appalling crop, a monoculture that wrecks the soil, and whose need for fertilizers wrecks the coral reefs with its runoff and it produces an industry that lives by government subsidy. These are photos of your tax dollars at work. There are bipartisan moves afoot in Washington to spend more of your money to restore the Everglades from the destruction already wrought. And so the circle turns. 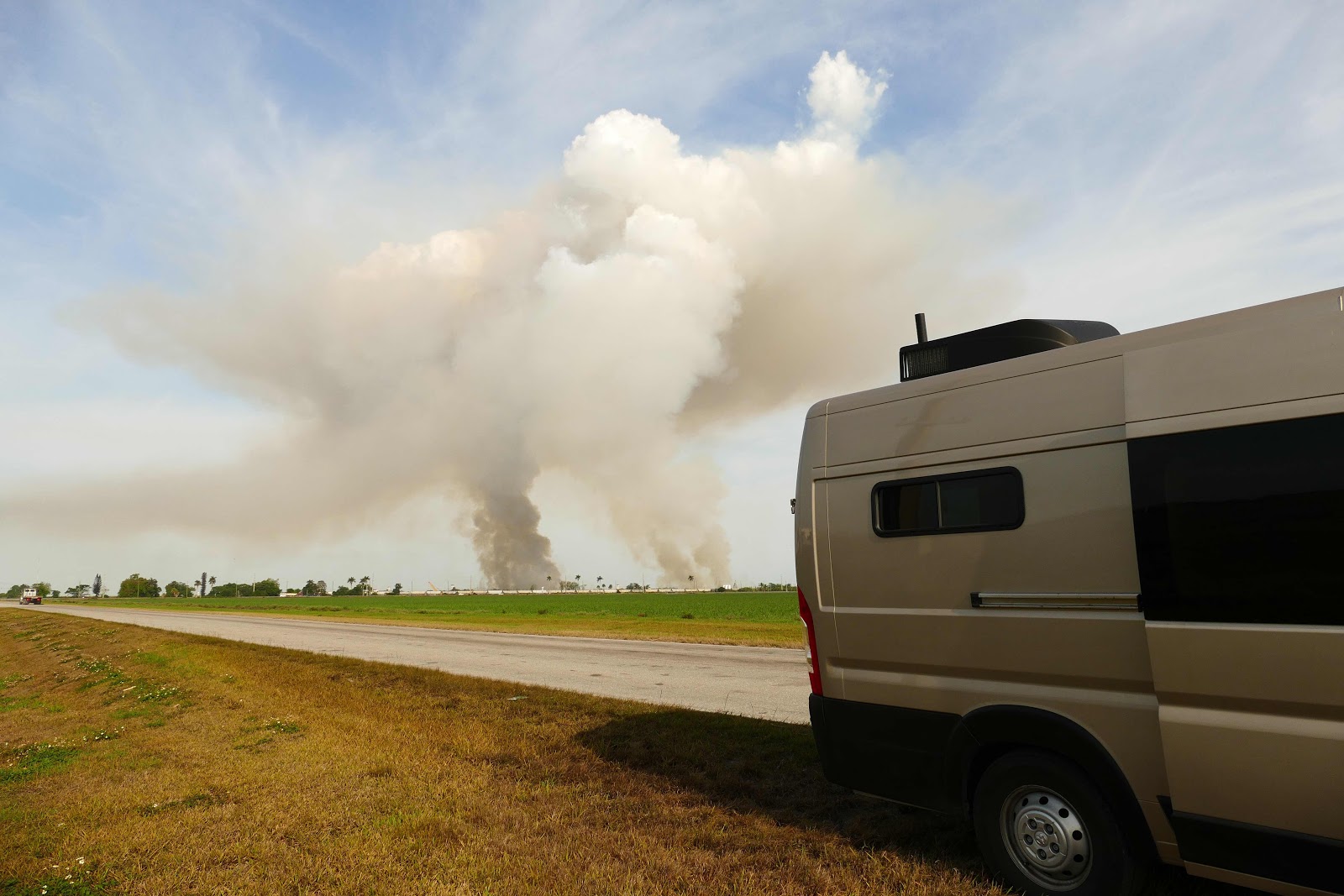 North of the lake Florida becomes a series of rolling hills covered in pine forests which are broken up by fields of cows and horses. Hands up if you didn't know there are actual cowboys and rodeos in central Florida, just like their more famous counterparts Out West! 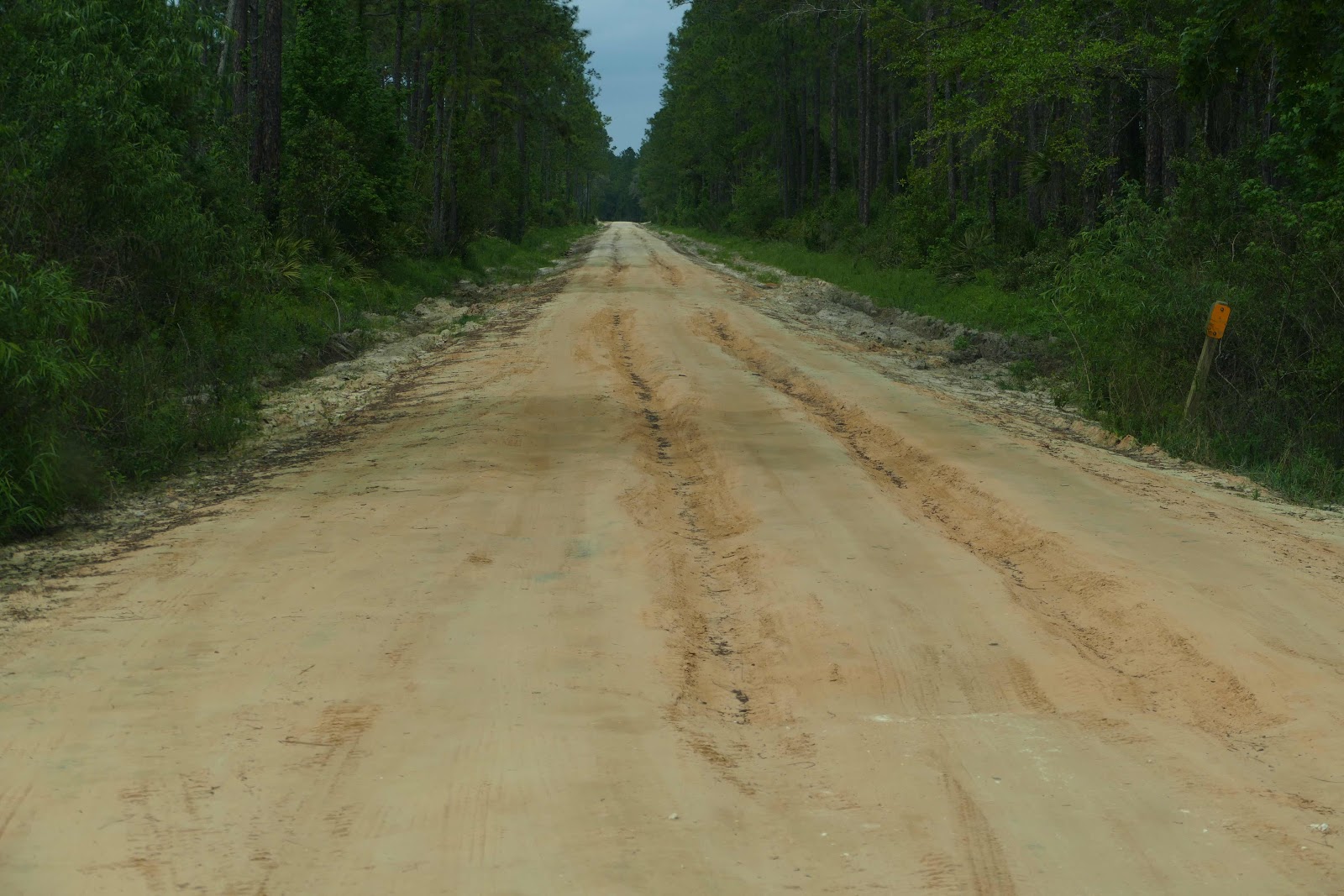 I am very fond of Google maps and especially the satellite view which allows me to spot dirt roads and potential sleepover sites and so forth with a birds eye view. I knew this was a dirt road but the satellite view did not tell me what a disastrous state it was in and I doubt my picture renders the true awfulness. In rainy season it would have been impassably slippery for two wheel drive, as it was I kept the tires on the ridges and avoided the trenches dug down the middle of the road. We proceeded at five miles an hour bumping as though on a pogo stick...good practice this for future adventures I kept telling myself with false bonhommie. 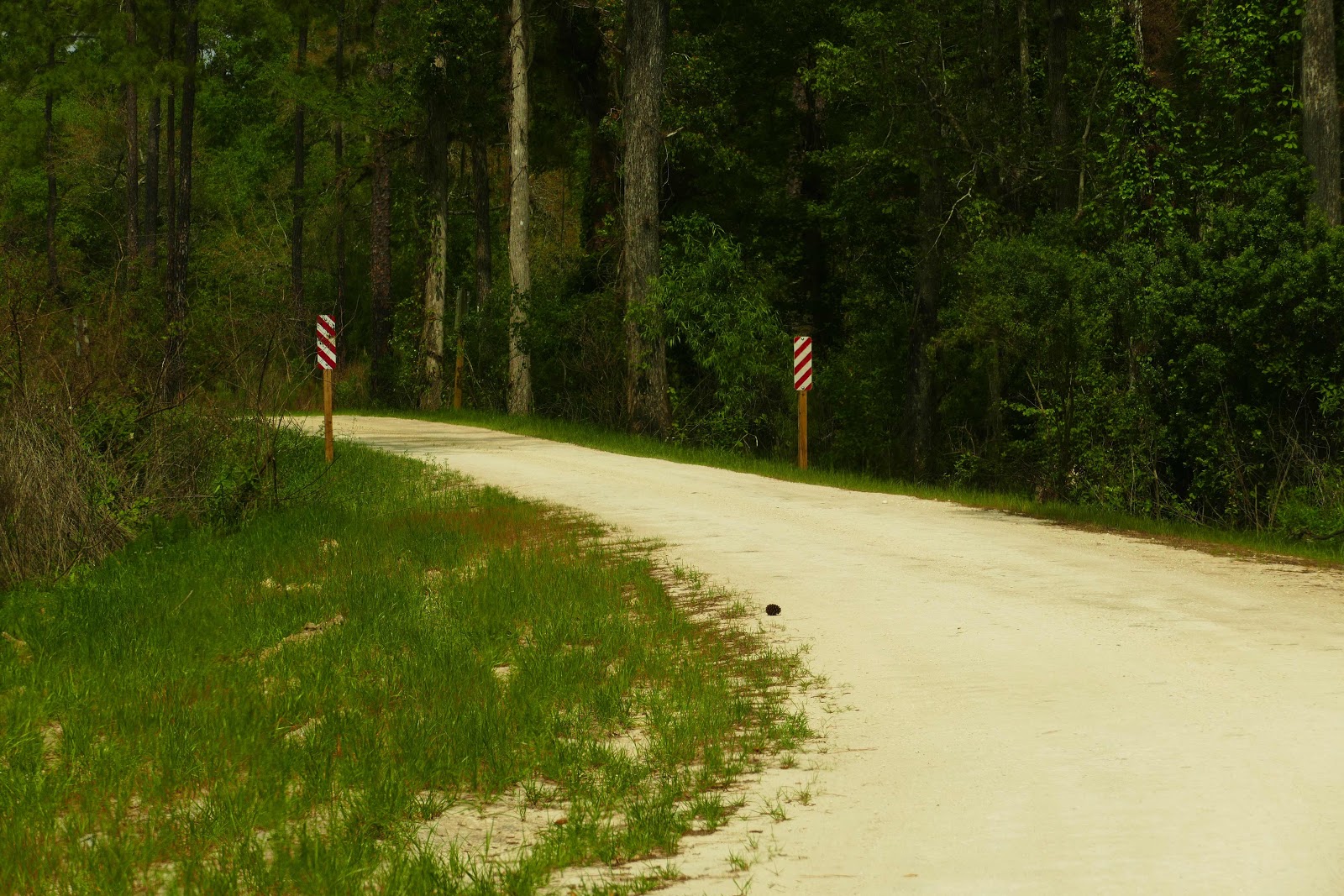 I was wondering how much daylight this madness would consume but after twenty minutes of snail-like progress the road mysteriously turned into a gravel freeway and progress increased to a steady twenty miles per hour, with stops for through-the-windshield photography. 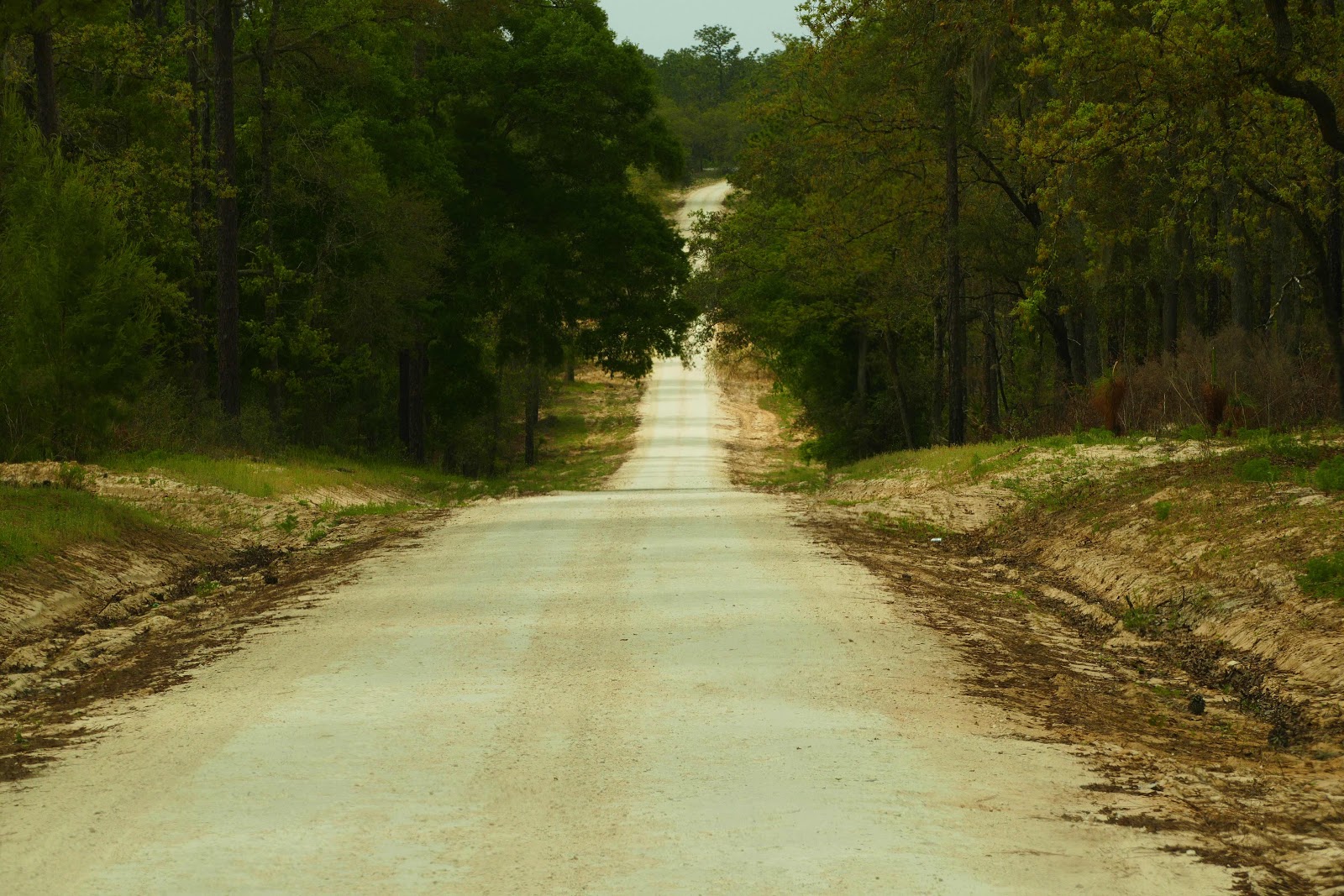 These wilderness areas are the Florida reserved for residents, far from the beaches. This is the Florida people who love to hate this sunny state don't know about. It's here that people with guns and all terrain vehicles and tents come to get away from selfies and beach bunnies and all the nonsense of Spring Break and the headlines. In their midst you find me, the unarmed pansy who likes the woods and the solitude and ventures there with a camera and a silly on road van. 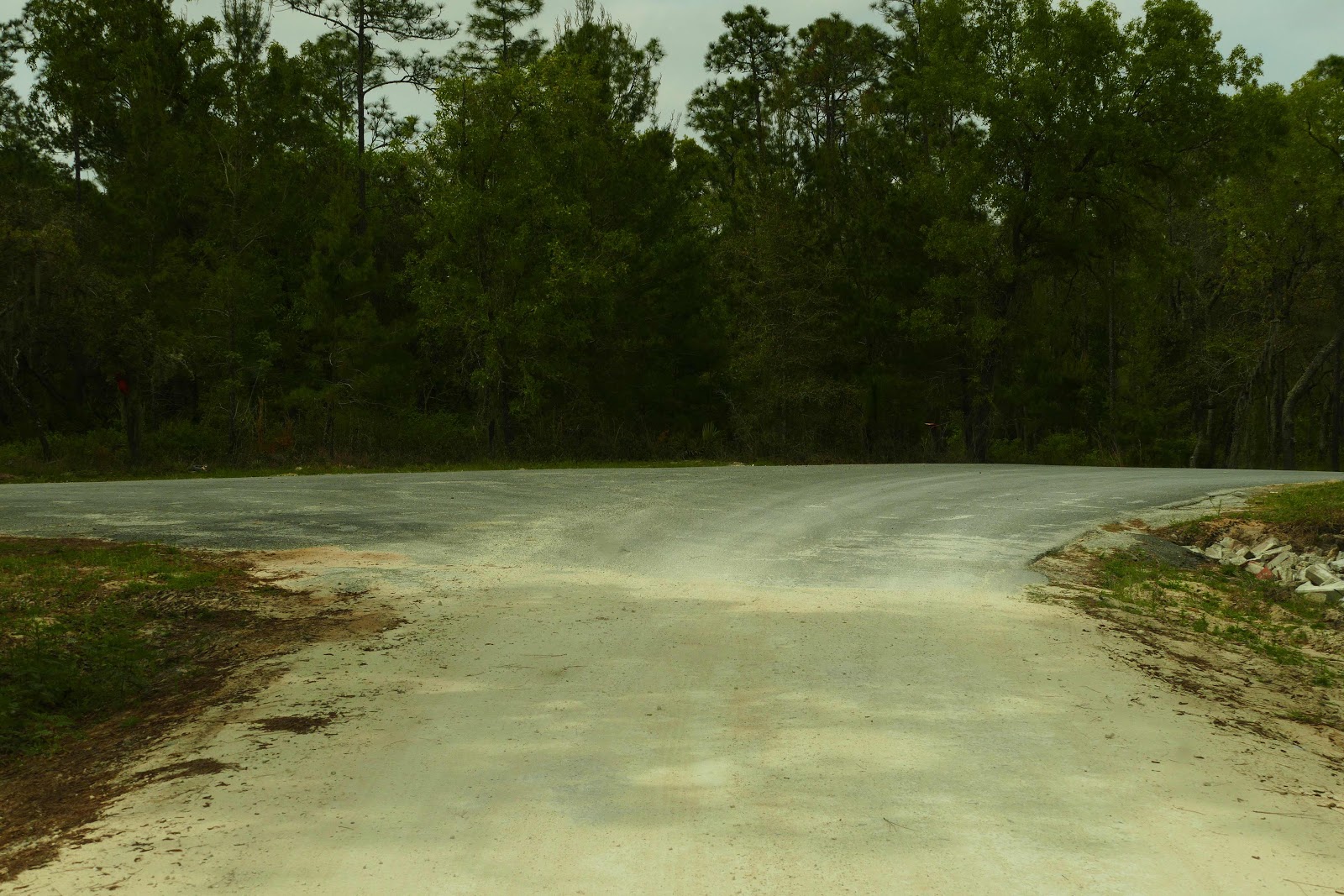 I admit I was glad to see pavement after thirty minutes of bouncing around, even if the pavement brought with it mailboxes and neatly mowed yards and curious looks and whole bunches of young people on bicycles in orange vests and no masks. 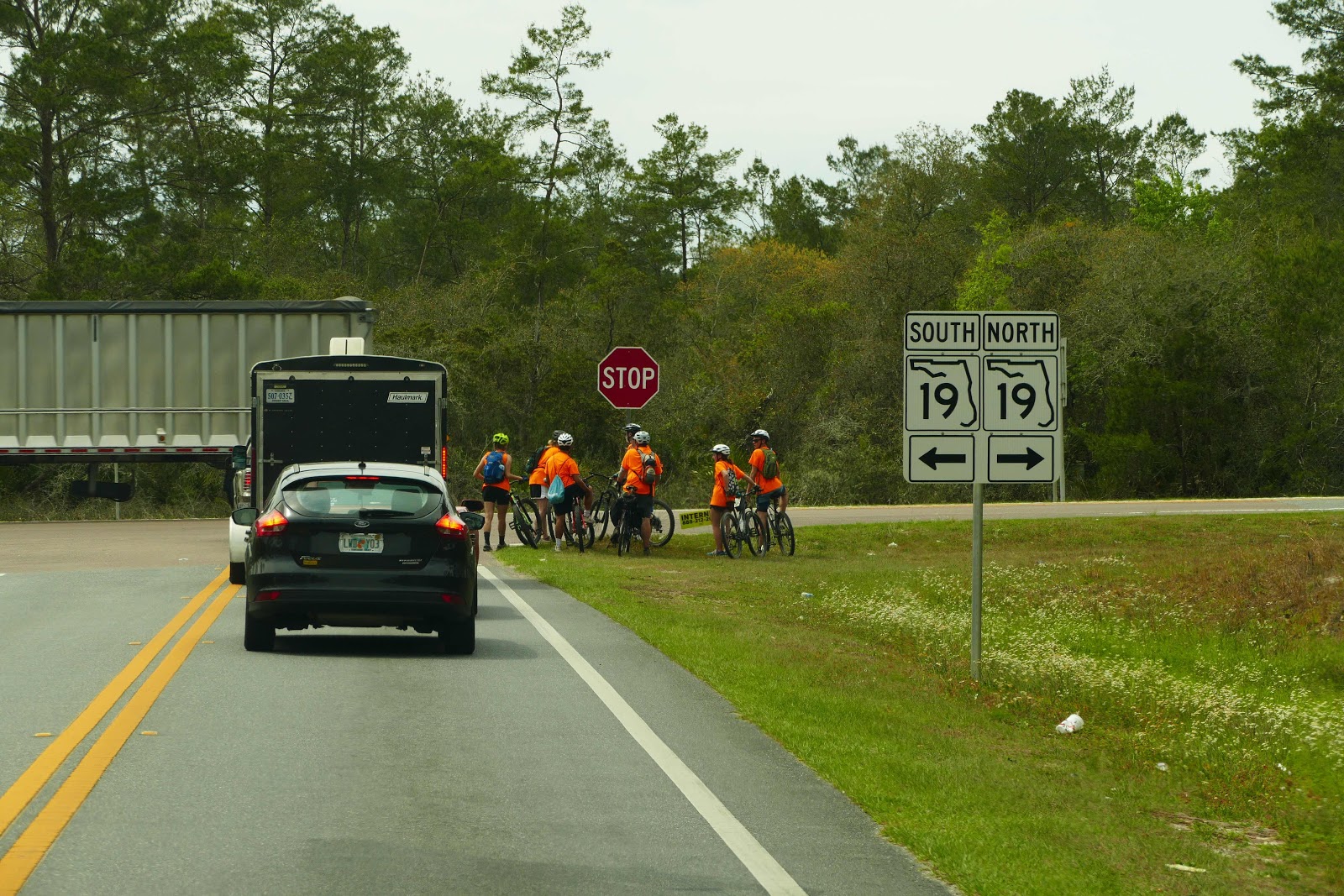 Highway 19 points straight north and south through Ocala National Forest. Lots of sandy tracks spin off from here, some narrow enough only for small ATVs, some wide enough to accommodate a van if the surface weren't too deep in soft sand...a front winch would be handy to get out of a sand hole were you to get stuck. Luckily they happen to install them in Jacksonville, my destination for the night. 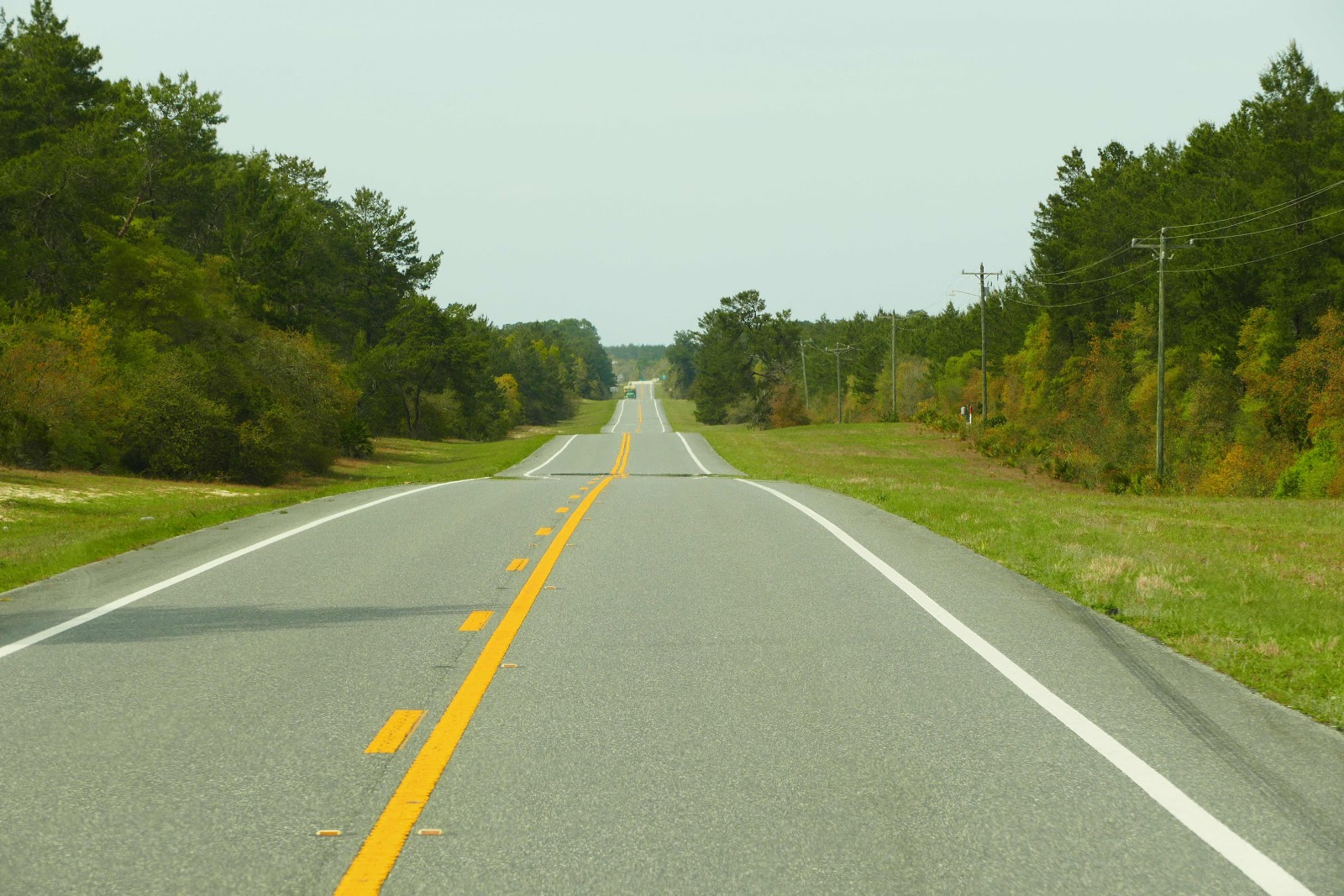 Obeying my principle of an early start and frequent stops I pulled over at a roadside turnout. An especial privilege as dogs aren't allowed but canoes are. Strange priorities. At home I had forgotten to empty the portapotty I carry in the van but the convenience of that little bundle of joy is that you (I) can empty it anywhere so at the turnout I saw not only a trash can but also a public toilet as well as the canoe launch. Such are the preoccupations of life on the road. Then I walked the camera down to the river. I had half an idea to take a quick swim until I heard the rather deep staccato grunt of an alligator looking for a mate, a grunt too deep for a bullfrog and too insistent to encourage me to take a swim, despite the heat. 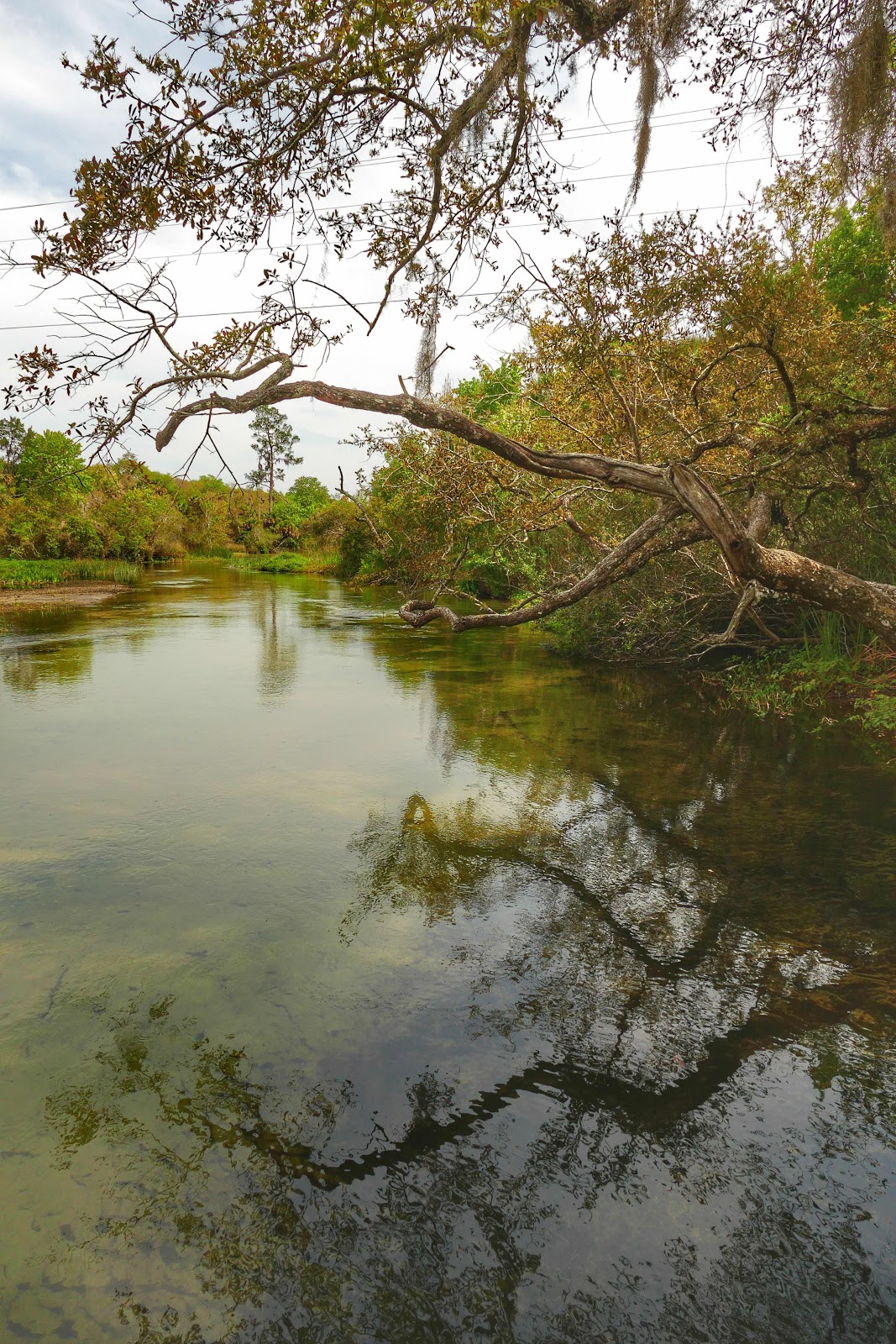 I pressed on and found another reason to stop, an empty parking lot. I made a u-turn on Highway 19 and found myself at a trailhead of the Caravelle Wildlife Management Area. Time for Gannet 2 and I to part ways. 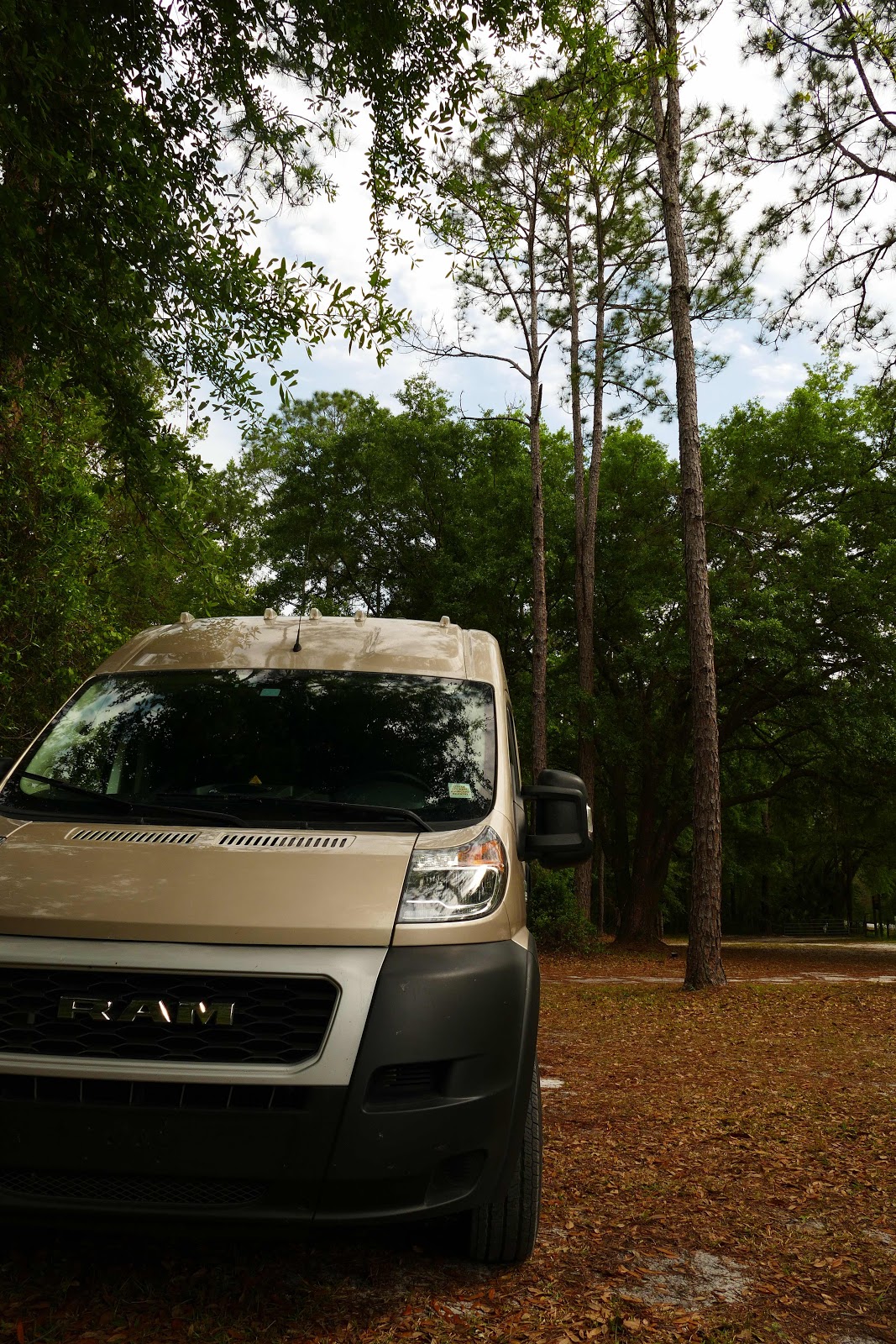 I do succumb to idiocy from time to time and instead of simply photographing the map with my phone I took a paper copy that I carried with some difficulty in my pocket. I referred to it quite a bit as the walk progressed chasing white yellow and red blazes on the trees. 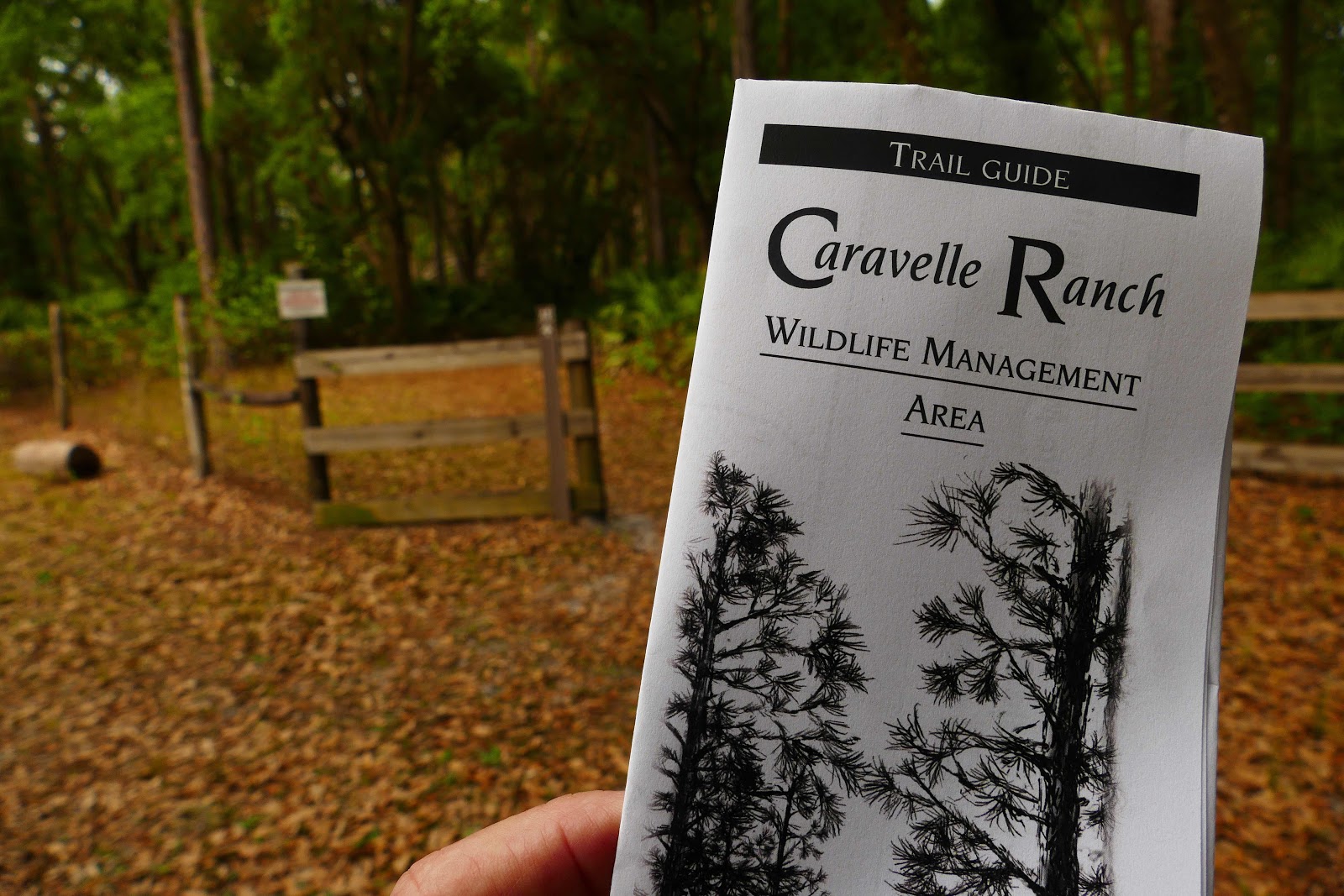 I know the Keys are special and the tropical environment is unique in the continental United States. However big trees, soft mulch underfoot and lots of shade can be quite enjoyable too. 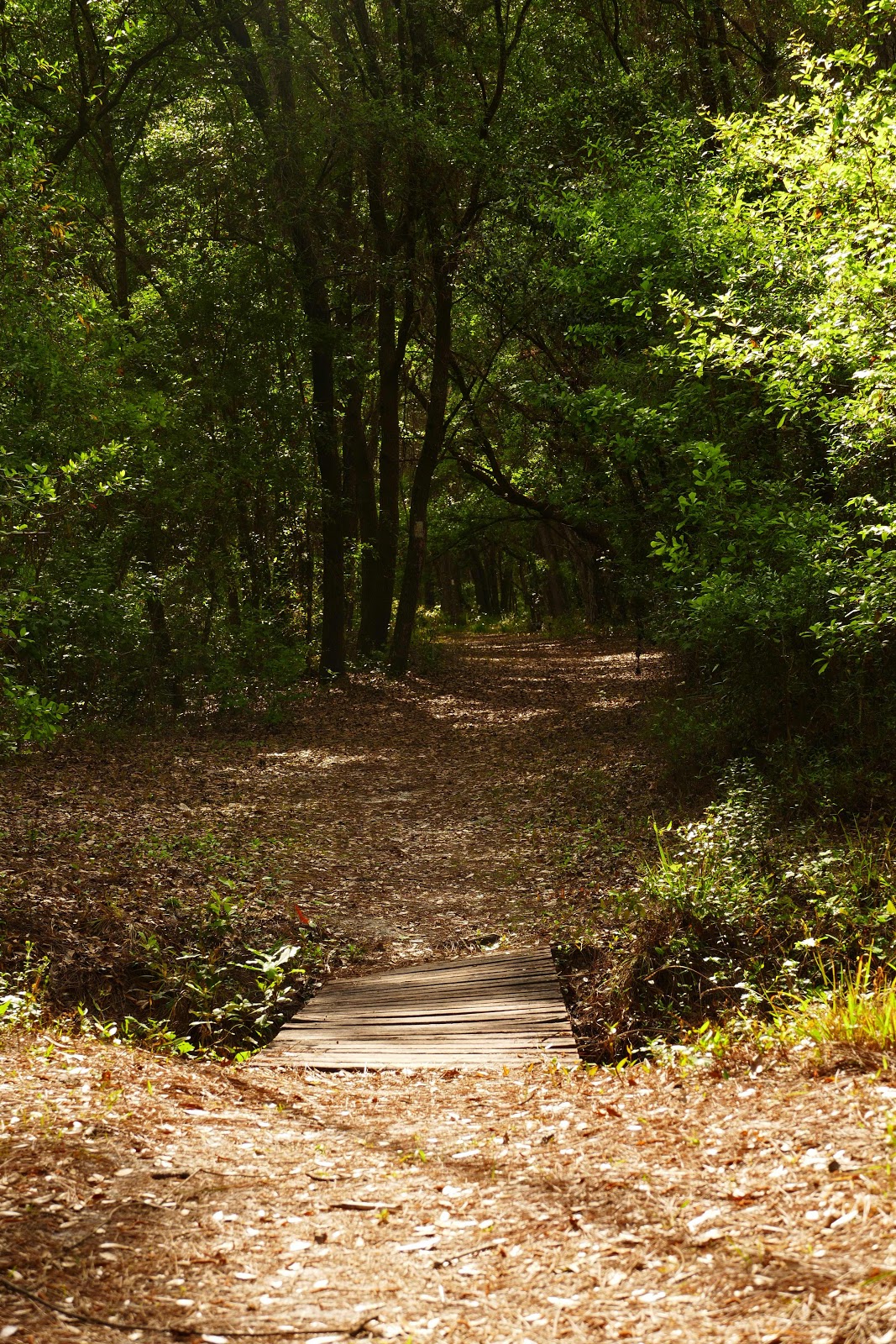 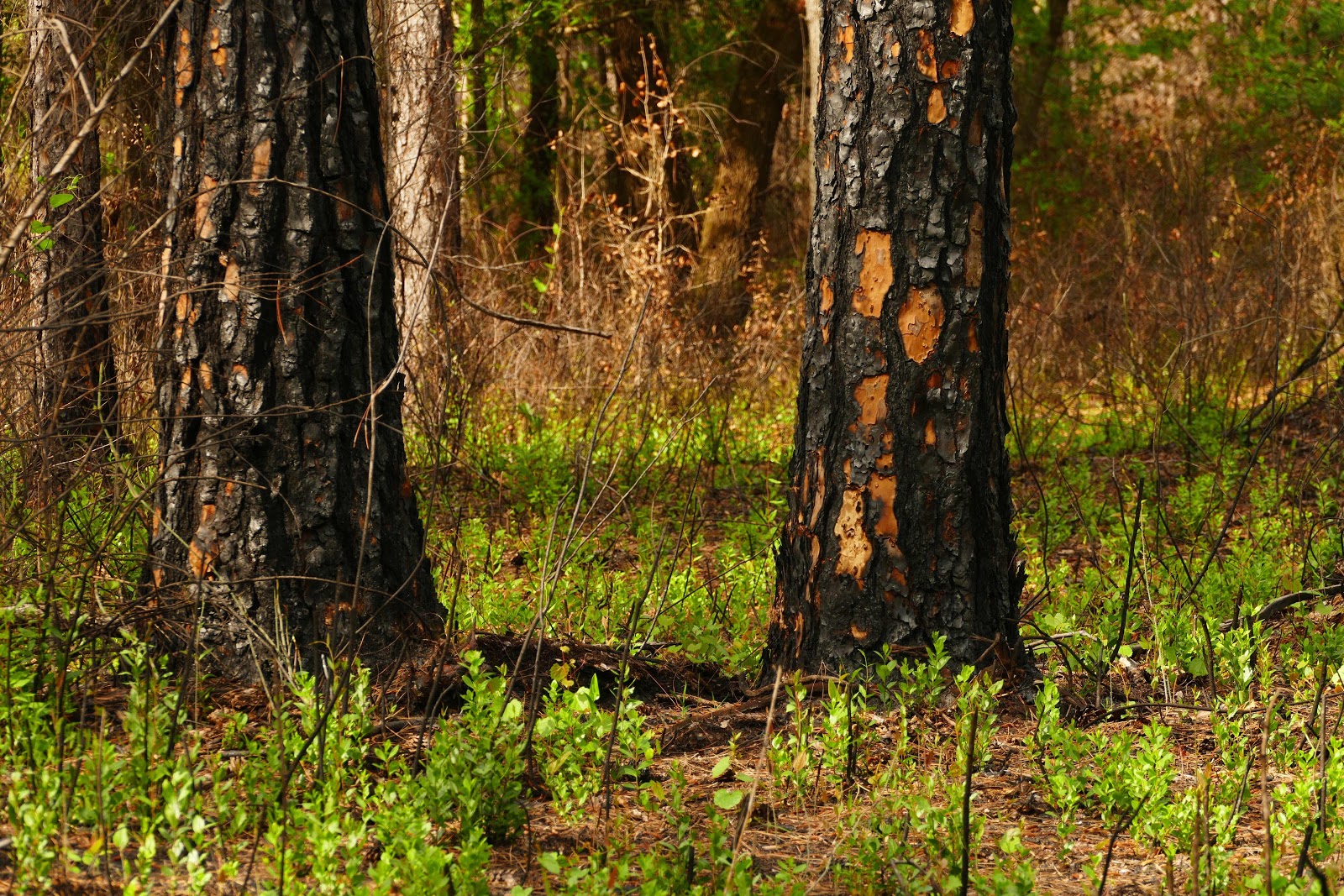 This I suspect is the work of a woodland vandal pecking away. 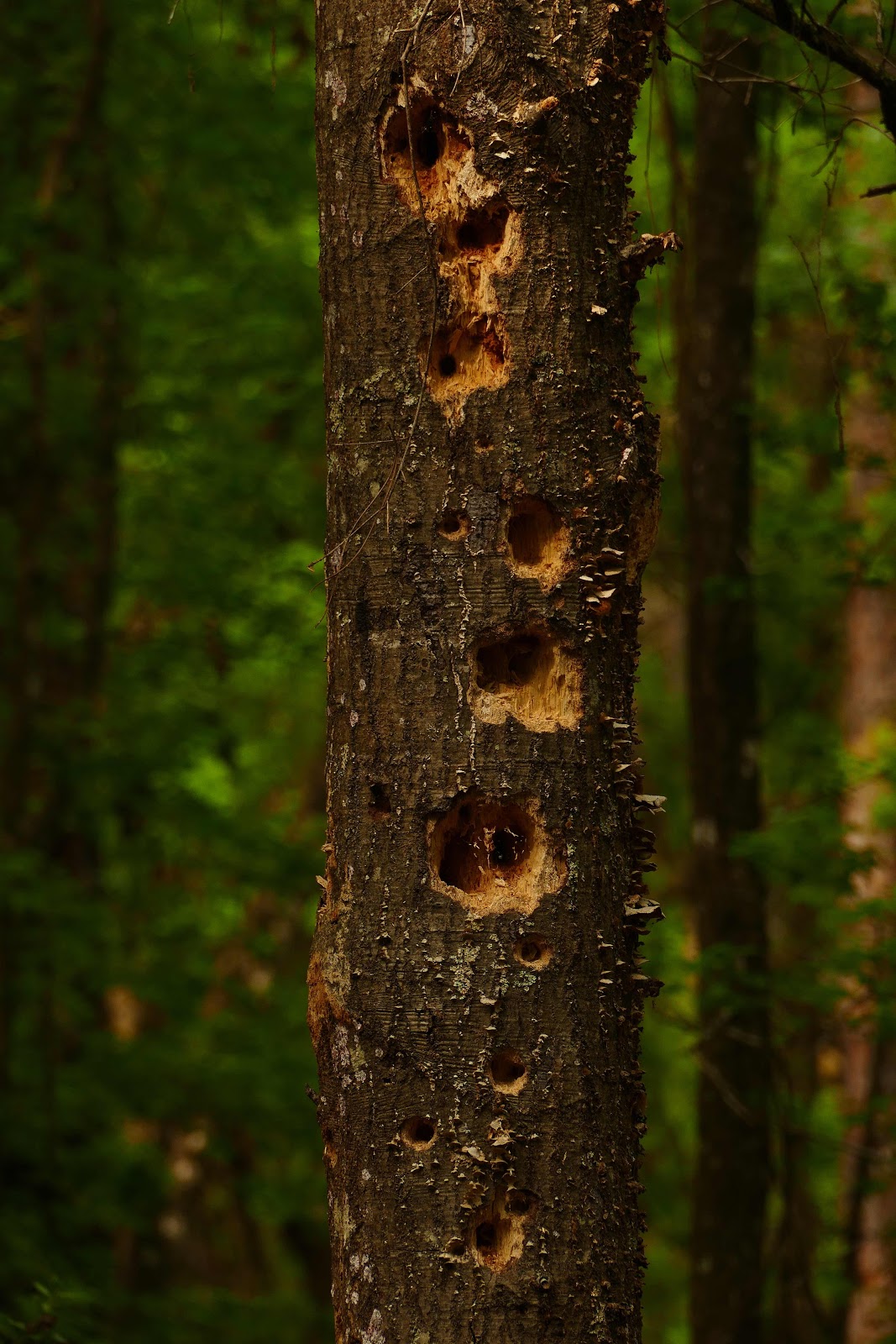 The white trail became a muddy mess which led me to figure that rainy season might not be the best time of year to visit and I was lucky this is dry season. I worked my way around the mud holes and enjoyed the reflections along the way. Mosquitoes were not in evidence either which was nice for a change. 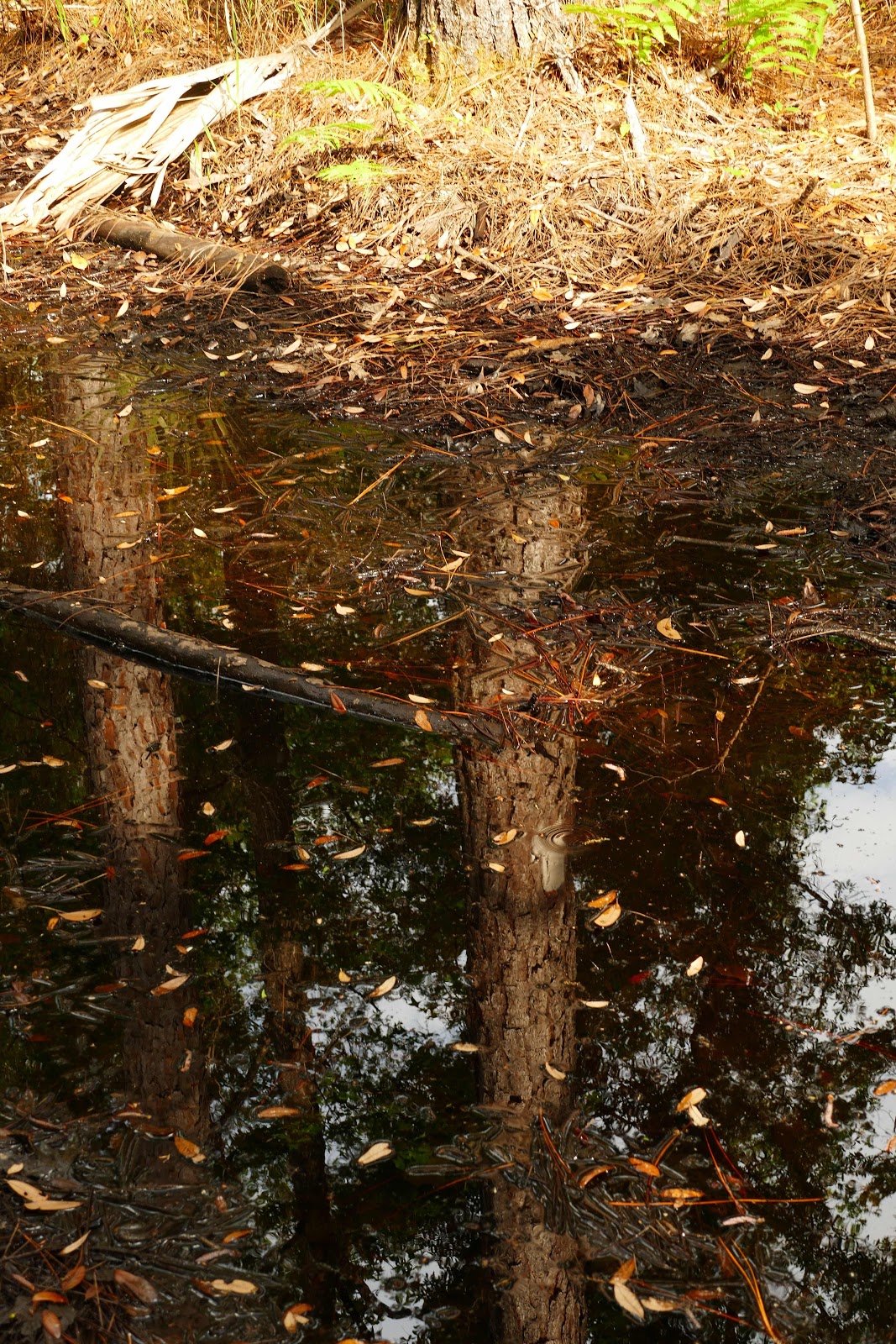 I don't quite get the layout of the land here because this massive roadway below, was not marked except where it doubled as part of the hiking trail. That produced a fair bit of confusion in my mind until I figured it out. However I just followed the white blazes clearly visible on the tree trunks and let the other trails go where they may. 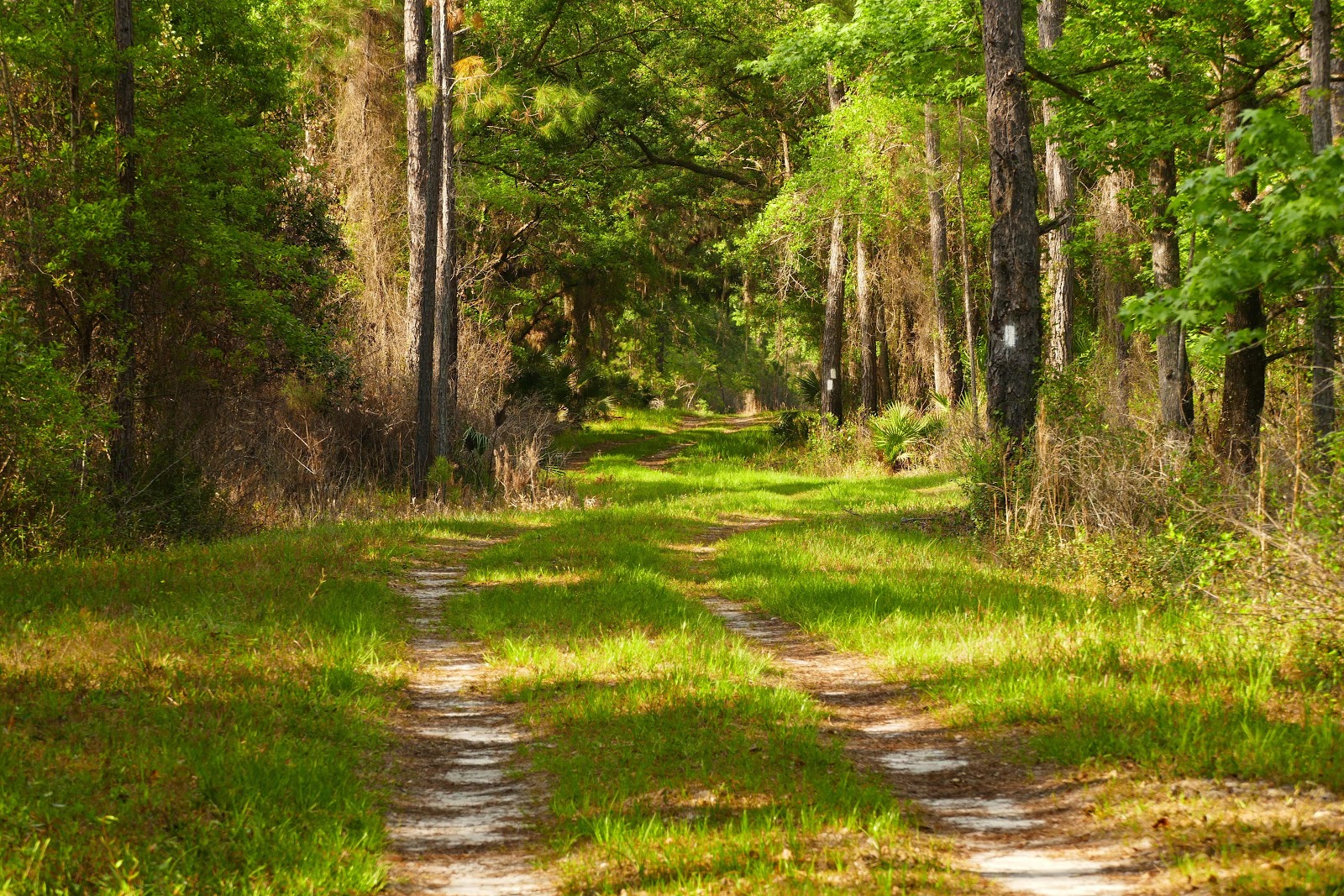 I had the whole place to myself and of course I missed Rusty, dogs are allowed which is one of the civilities I enjoy about Florida. I walked silently on, too deep into the woods to be able to hear traffic on the highway, a constant feature of my mangrove walks in the Keys... 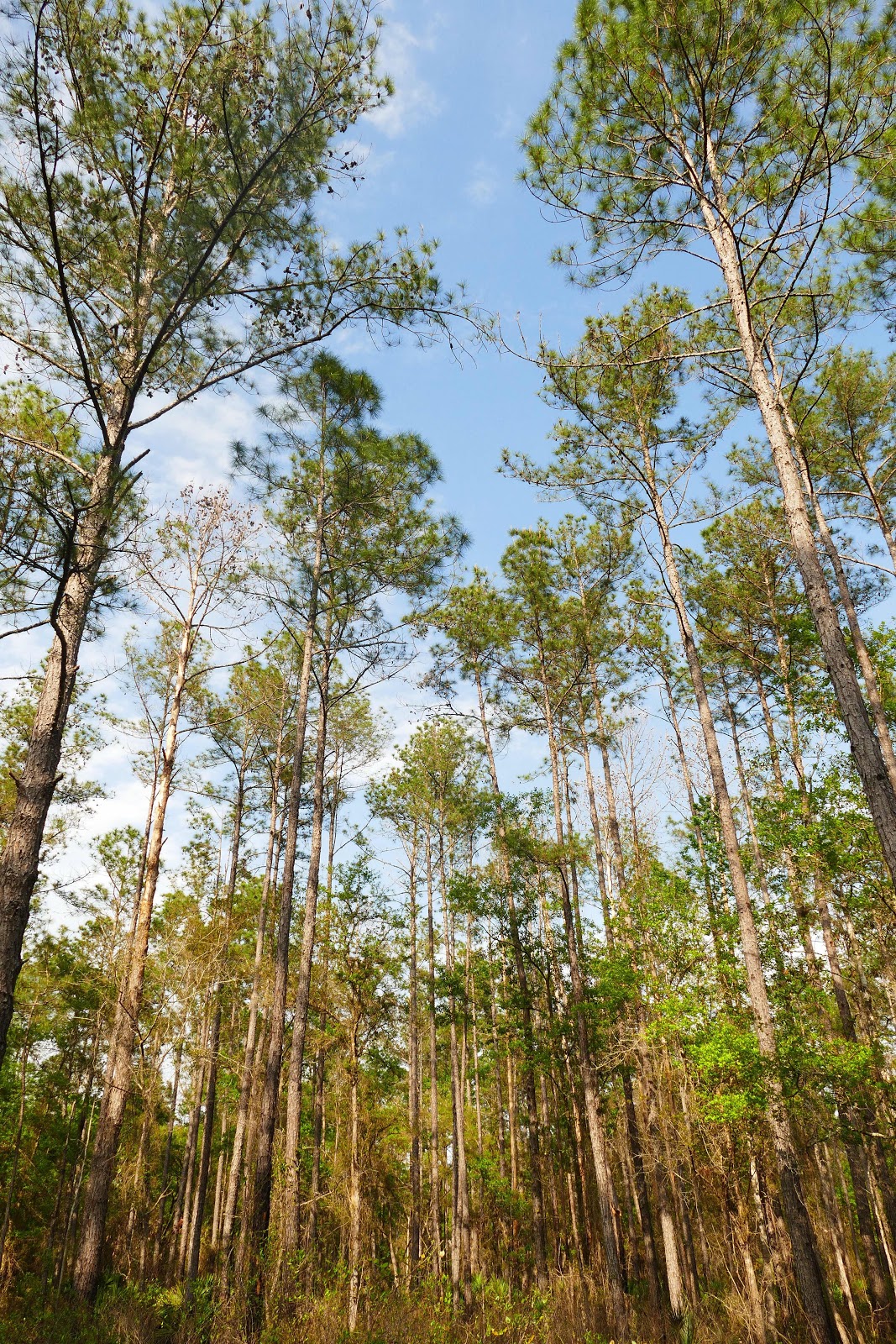 I walked to a spot marked "Shelter" on the map and whaddya know I found...a shelter. There was a sign posted forbidding vehicle traffic beyond "this point" which I figured meant the white trail leading back off into the woods. I guess if you come by the main entrance to Caravelle you must be able to get permission to drive out here for a picnic. I walked. Ha! But I had nothing to eat or drink or any other reason to linger so I pressed on. 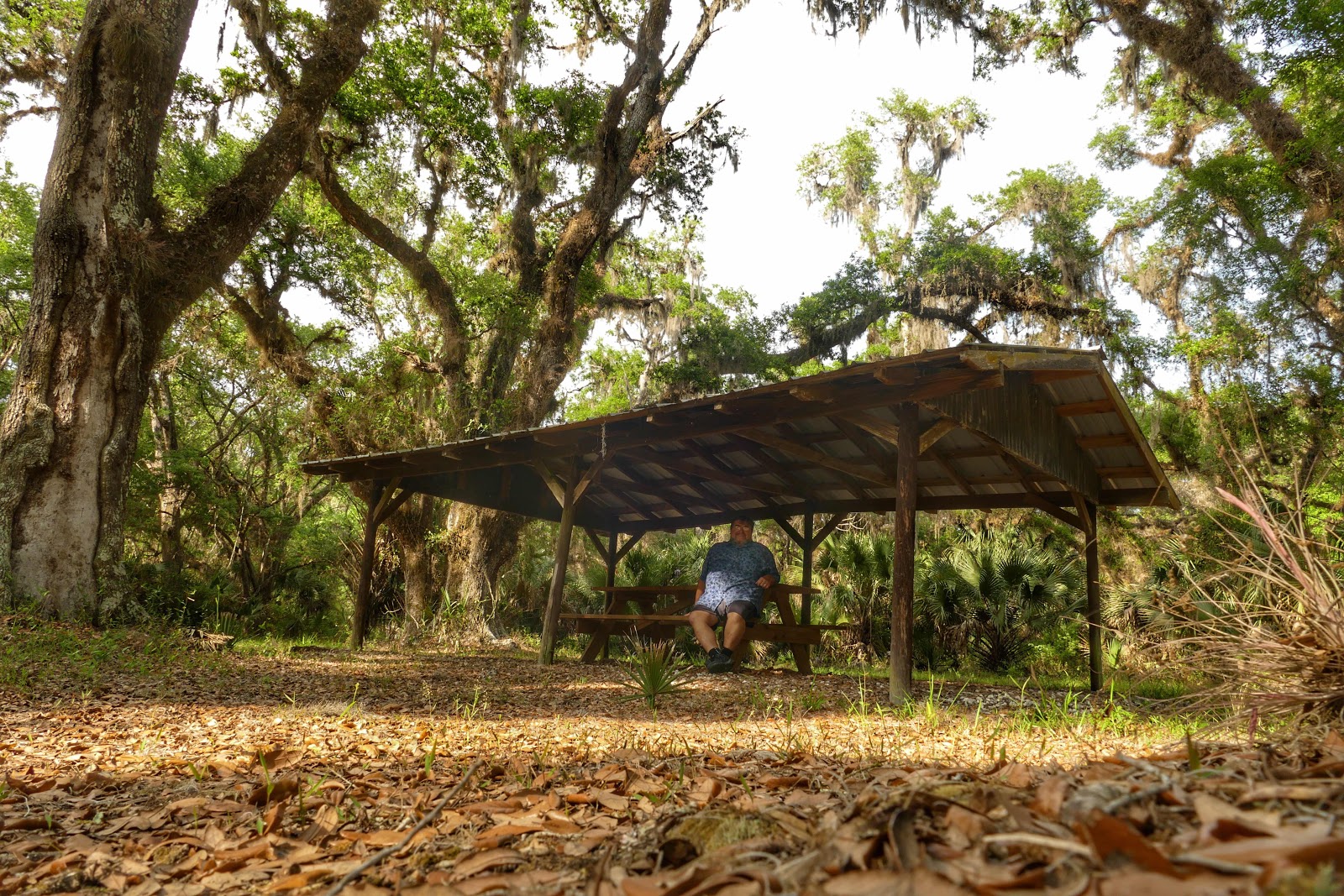 The sun was starting to set and I was having a sweaty good time. 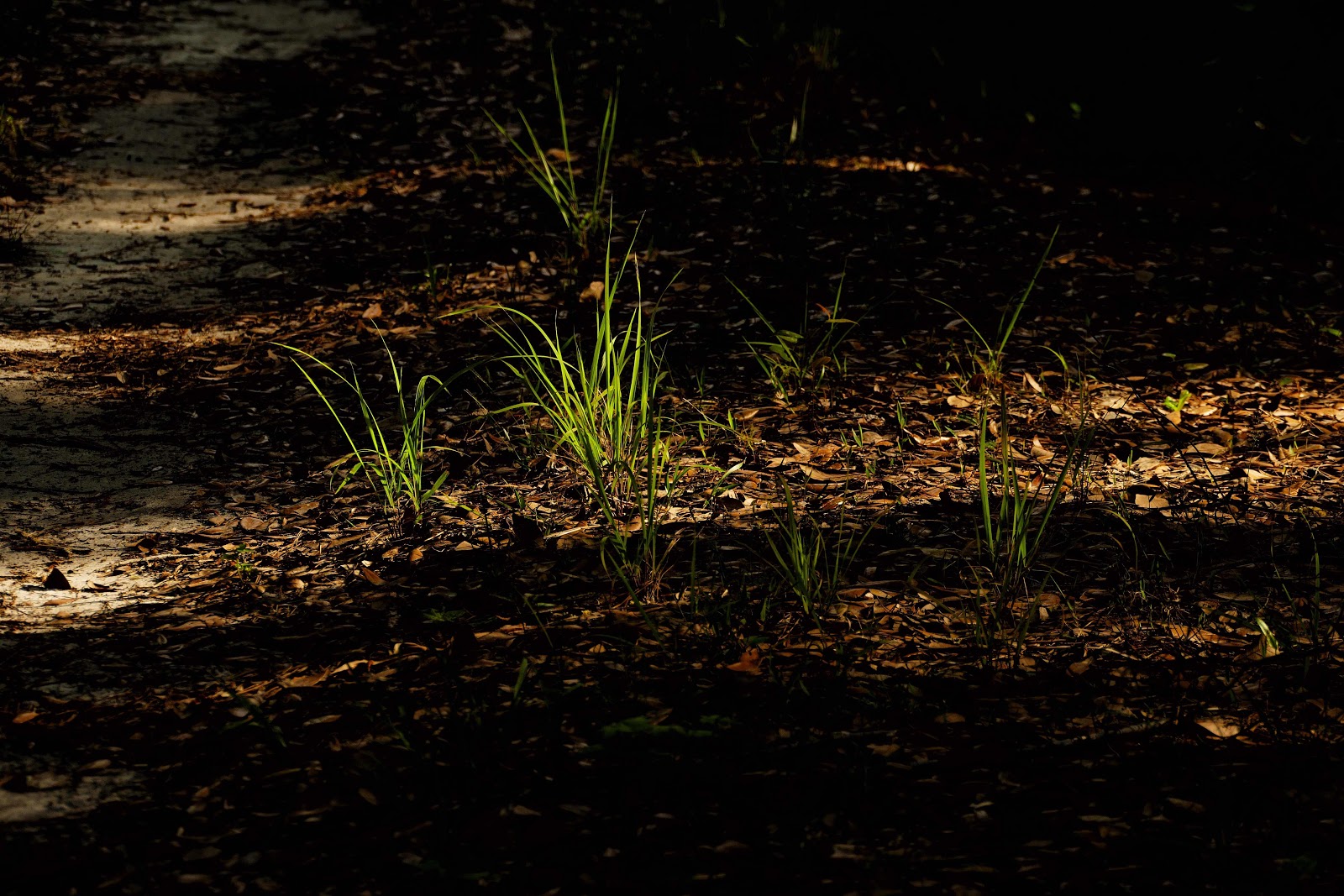 The trails were quite well marked and broad and mowed and easy to walk. It was an amble not a hike and I was entirely content. 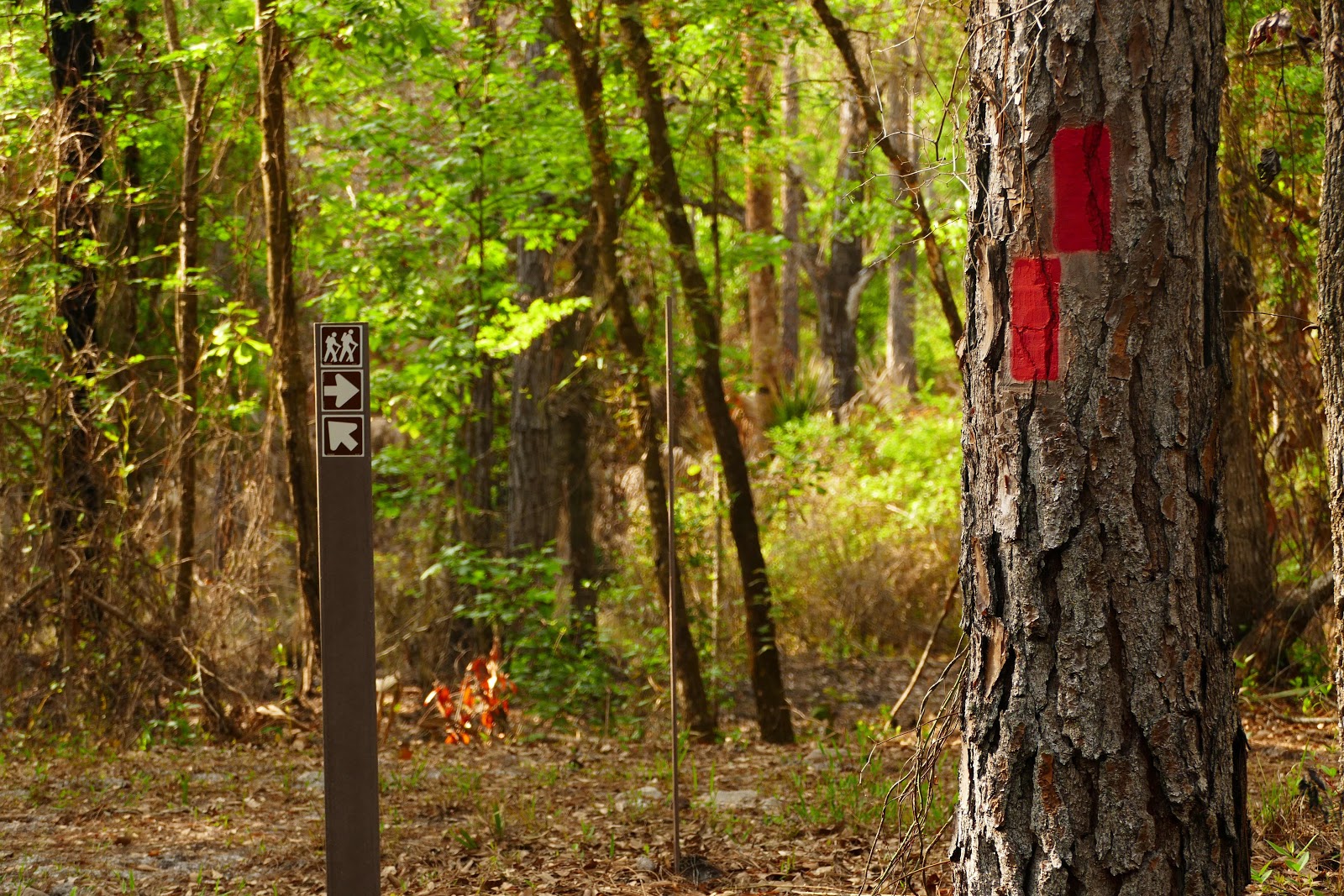 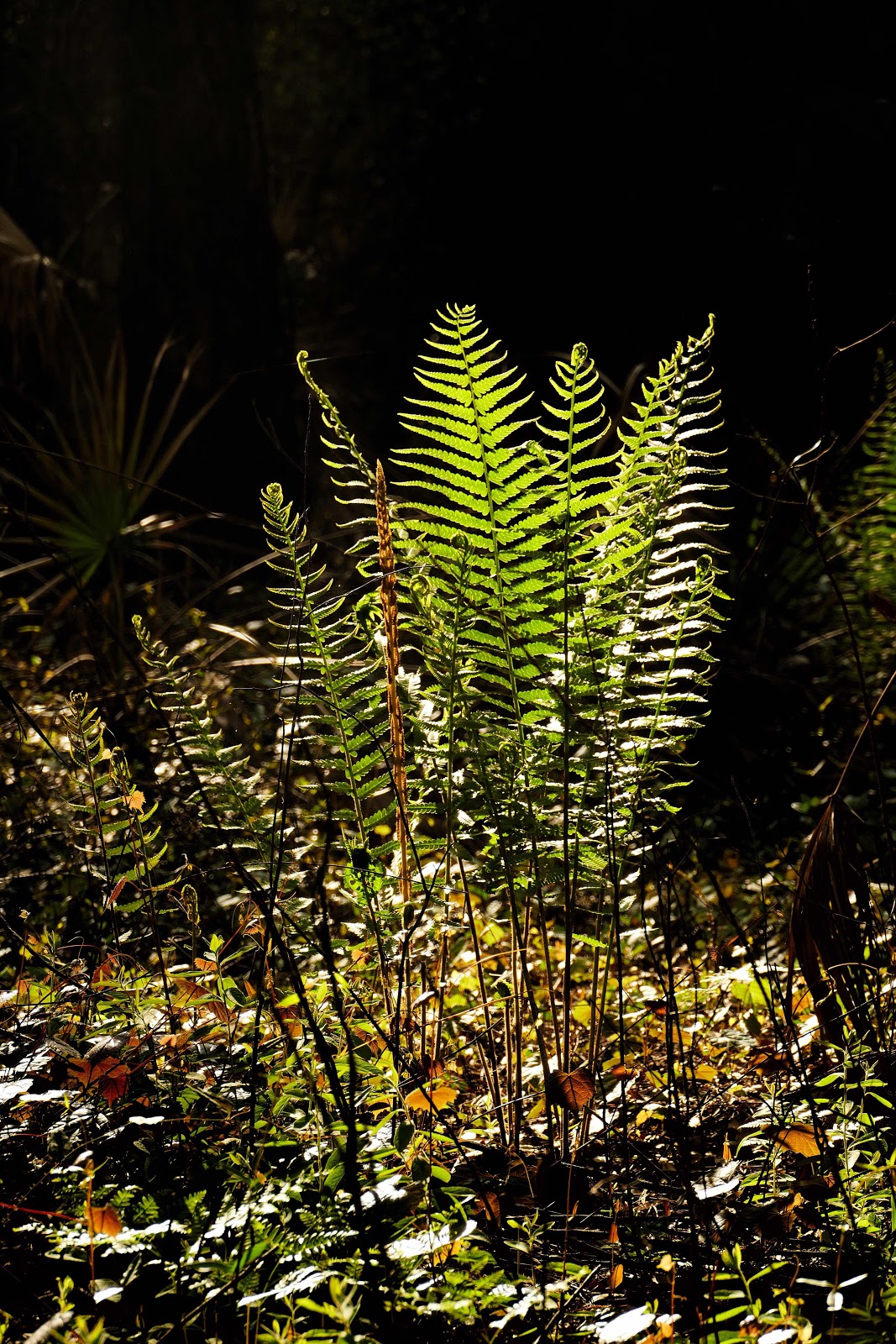 The trail back to the parking lot broke into a freeway again running alongside a fence. 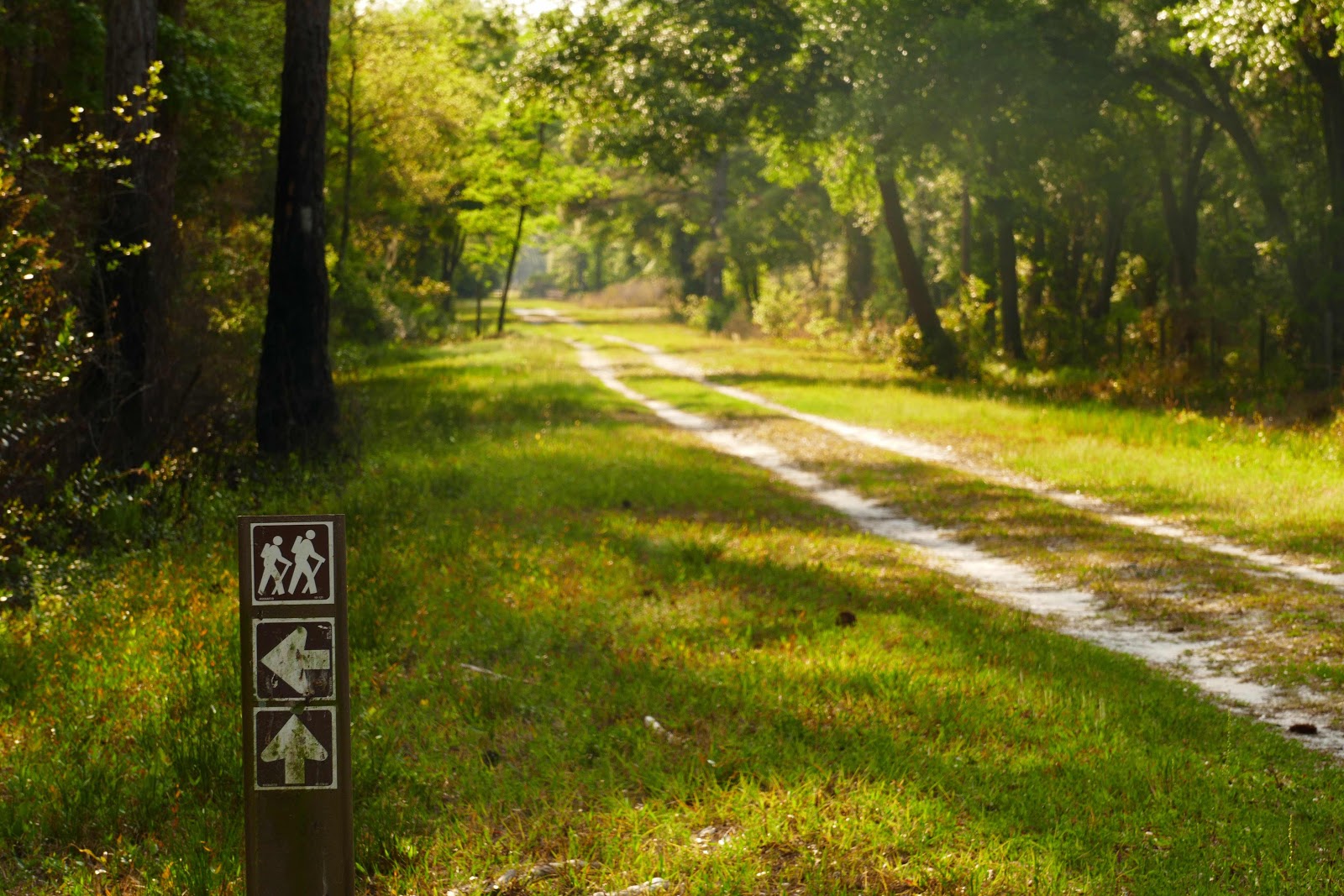 All I carried was my phone, my van keys and my camera which came in handy but kept slowing me down. 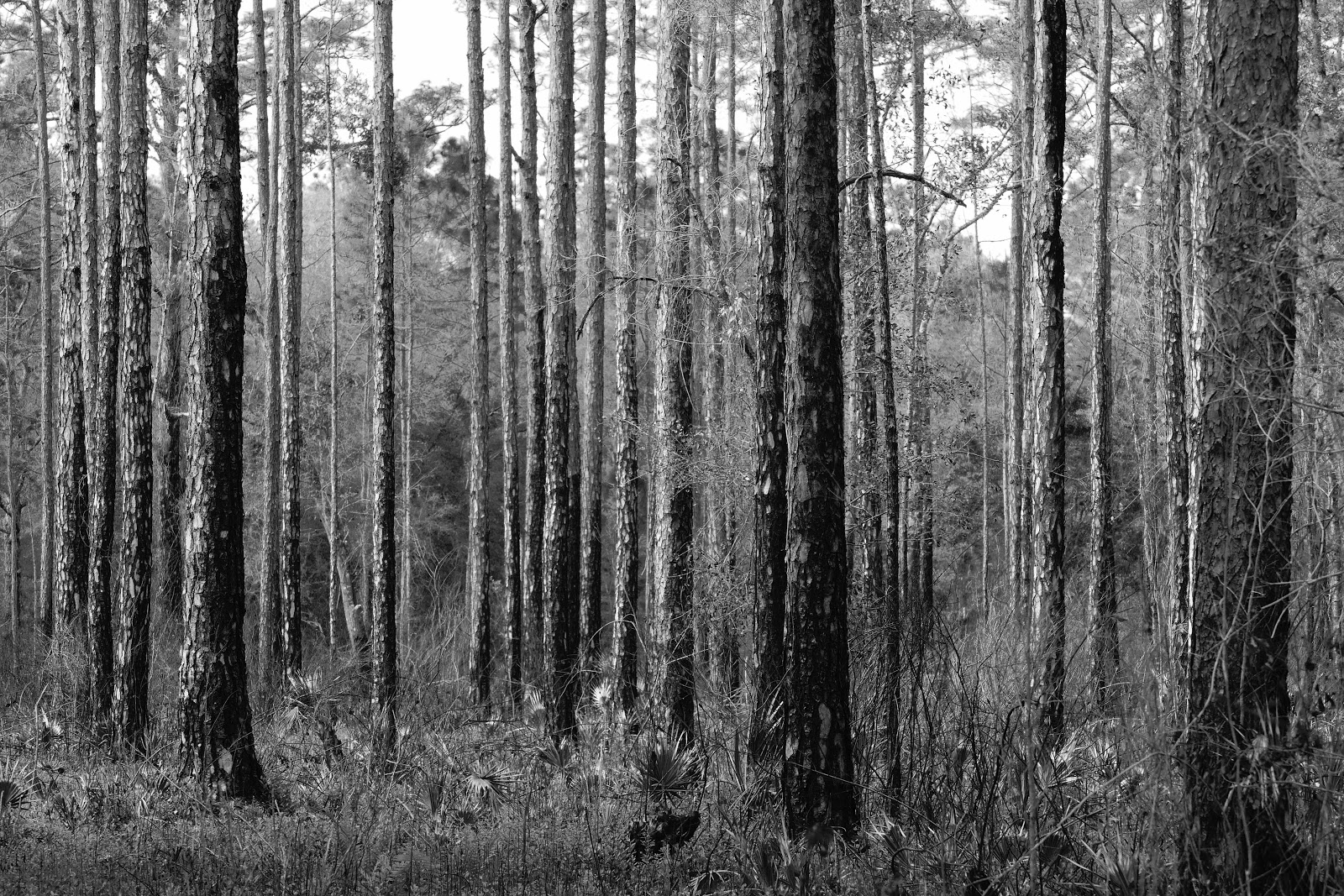 I didn't see wildlife but I did find trees of all shapes and sizes, a pleasure to see when you are used to stunted little things. 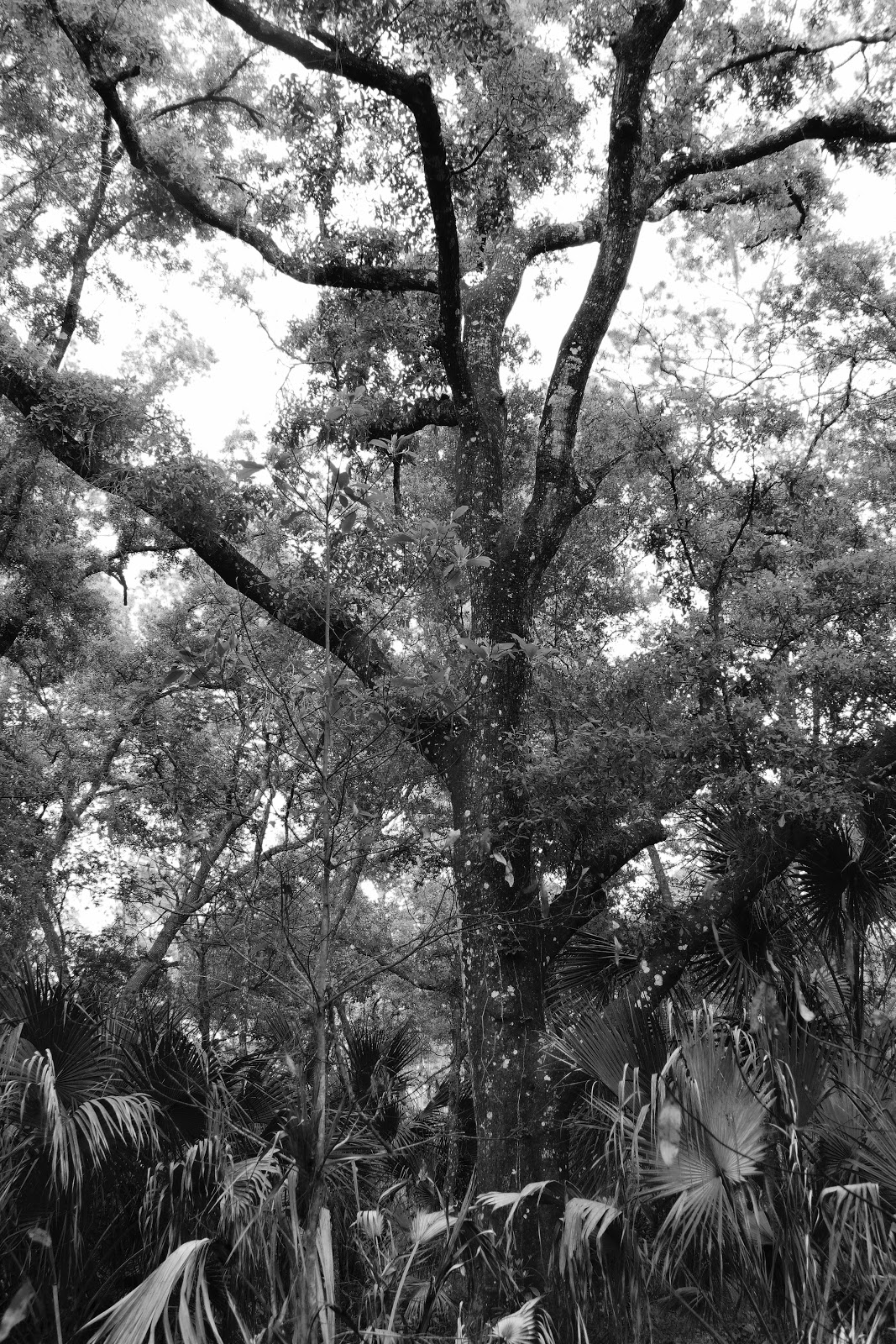 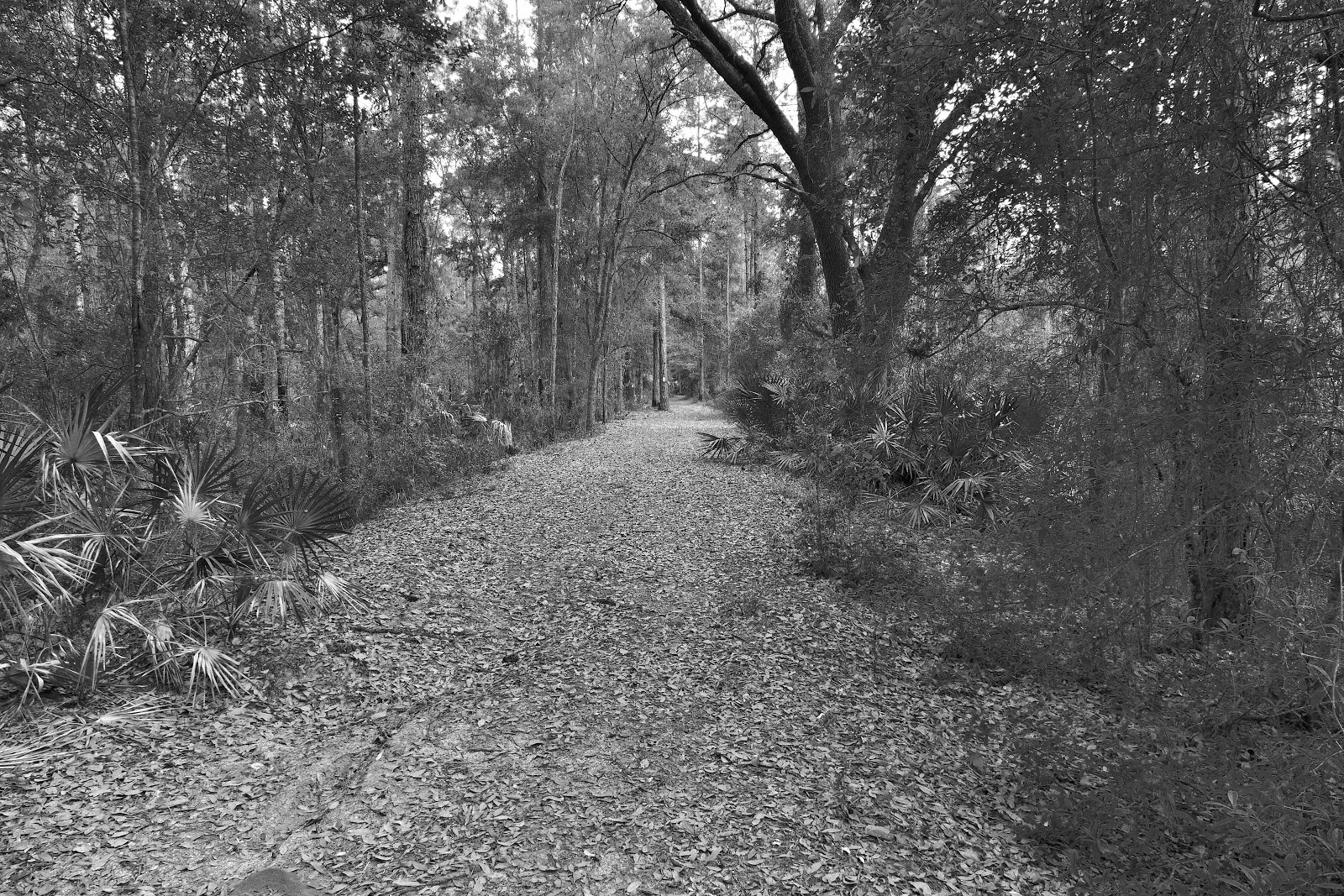 Back at Gannet 2 after a couple of hours. The van is my source of all good things including an electric tea kettle. I turned on the air conditioning, made some tea and settled down for a short rest. It was getting dark and I had to make tracks as, more importantly I was getting tired. 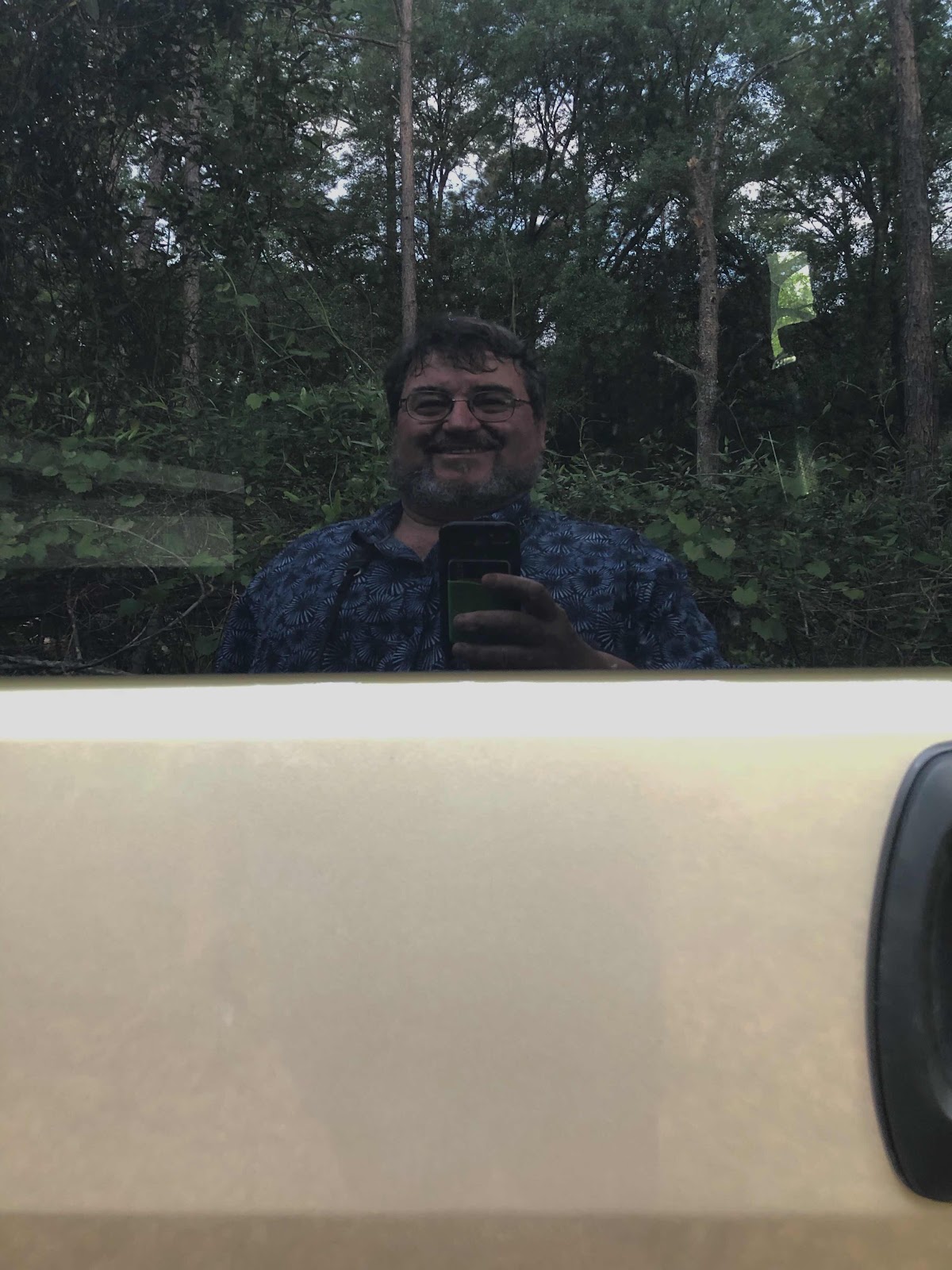 My destination was a rest area off I-95 just south of Jacksonville. I like rest areas as they offer the bare minimum facilities, no one bothers you  or requires anything of you and they are free. Weirdly enough for a noise neurotic like me, traffic noise on the freeway doesn't bother me  and my wife says it sounds to her like the ocean.  I fired up the microwave and Netflix, and I chilled in solitary splendor, no need to even get up to walk a dog. Imagine that. 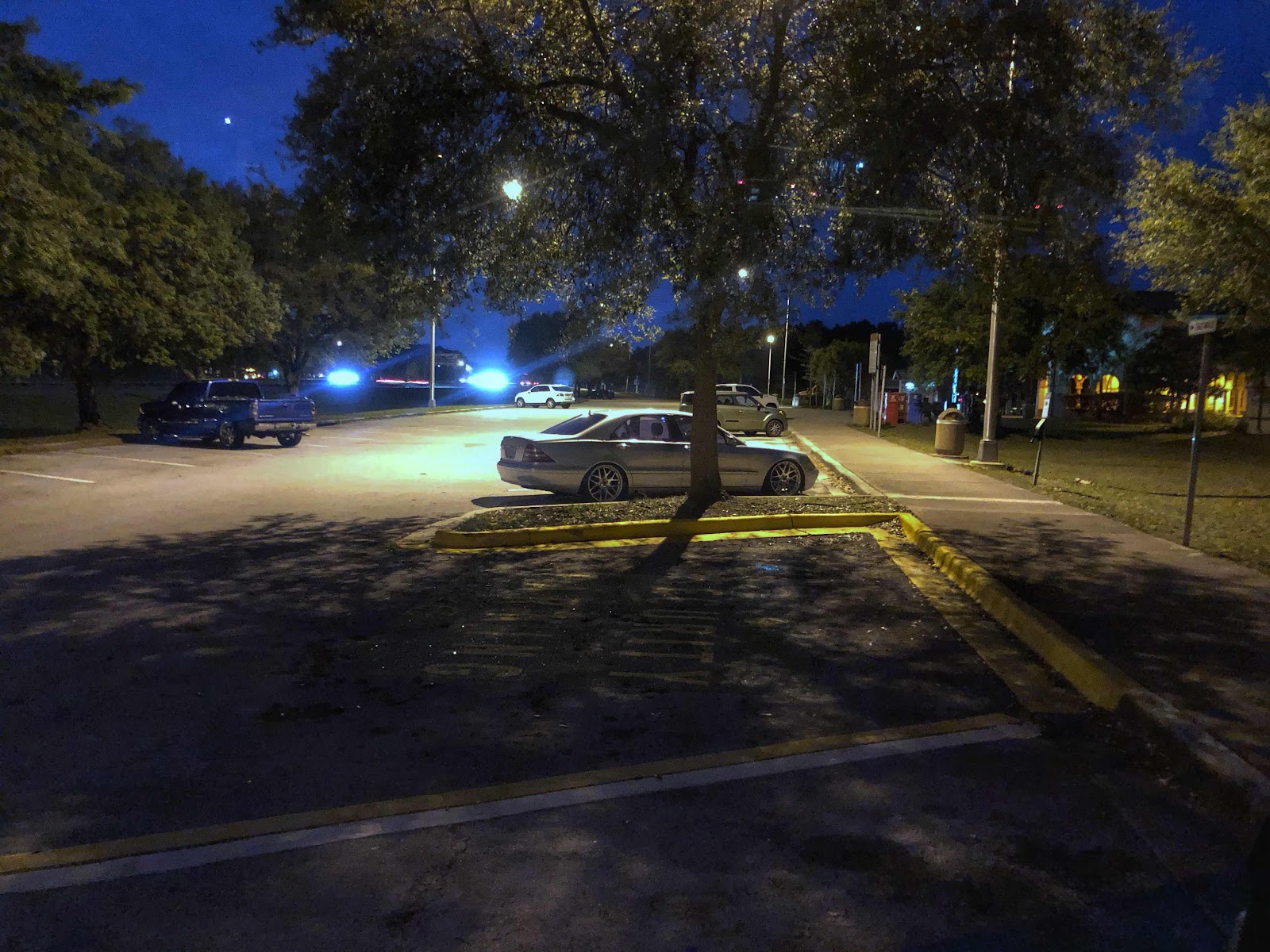