I slept in yesterday morning after a half shift at work saw me get home at 2:30 wide awake so I watched some Netflix and got to bed at four. So when Rusty inspected me with a cold wet impatient snout at seven in the morning I rolled over and begged for more time. 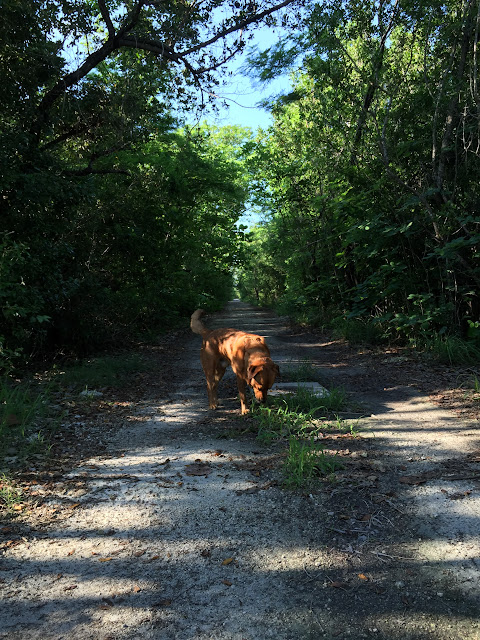 By the time I was groggily awake and kicked out of the house by my newly vacationing teacher wife the sun was well up and it was about 90 degrees at eight thirty. I figured a shady walk was in order and we went to the old State Road 929 south of the Sugarloaf KOA.  I posted the picture above as an antidote to the political posturing of the day on Facebook, but that was just the start of Rusty's day in the mangroves. 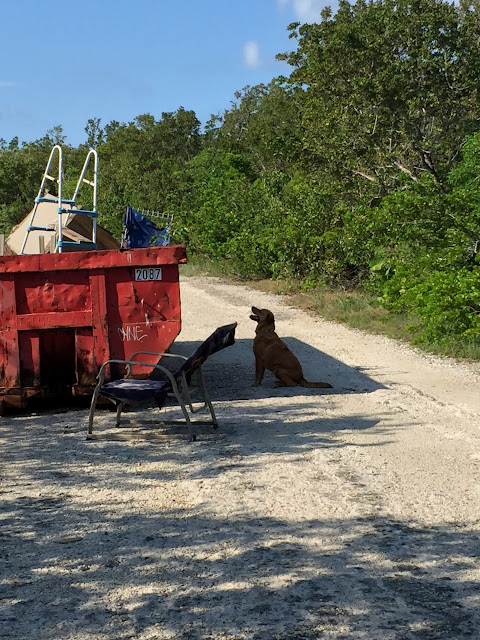 Something attracted him to the dumpster that has been gradually accumulating trash over the past few weeks, so I picked him up and presented the rather unwilling dog with a view of the interior of the trash heap. I expected him to rejoice instead he recoiled, so, having called his bluff I put him down. 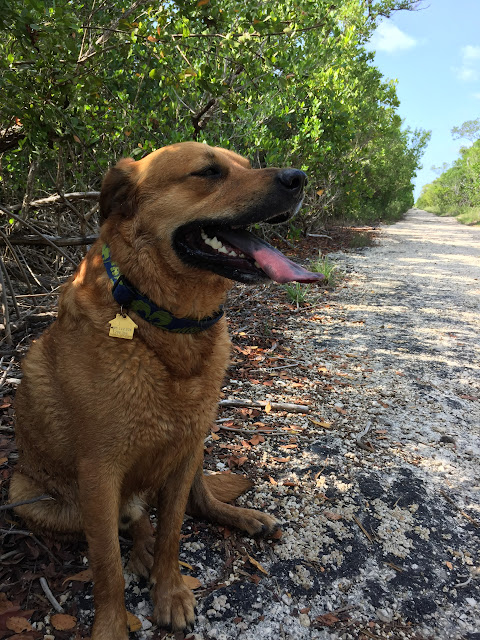 Further down the trail he dived off into the bushes by the side of the trail and the morning went silent. I perused the postings on the Orlando shooting and wondered at how twisted everything gets. a crazy man with a gun kills dozens of people and everyone wants to make political hay out of it so facts get bent to suit the perception. One thing did occur to me inasmuch as you don't hear of atheists shooting people on principle. I guess lacking any conviction of moral superiority or conviction regarding the unknowable we refrain from feeling peeved with people who disagree. It's odd isn't it how people ask atheists like me where our moral compass comes from lacking a deity, and yet ... no atheist  seems driven to murder people in the name of some idolatrous morality. Fringe Christians and Muslims seem to prefer to corner that market in the US. 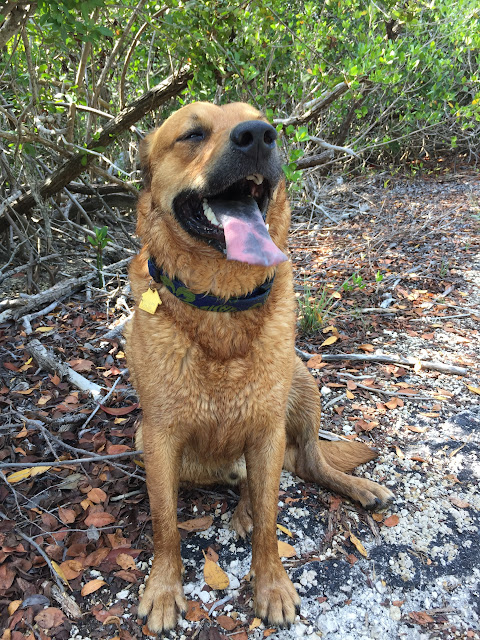 Rusty disappeared for ten minutes and I actually did start to get worried that his collar might have snagged or something so I whistled his particular whistle. There was a crashing sound a few long minutes later and the sound of a steam engine negotiating a particularly steep grade and then I saw a flash of brown swirling through the roots of the mangroves. I made him lay down for a few minutes to catch his breath he was panting so hard. 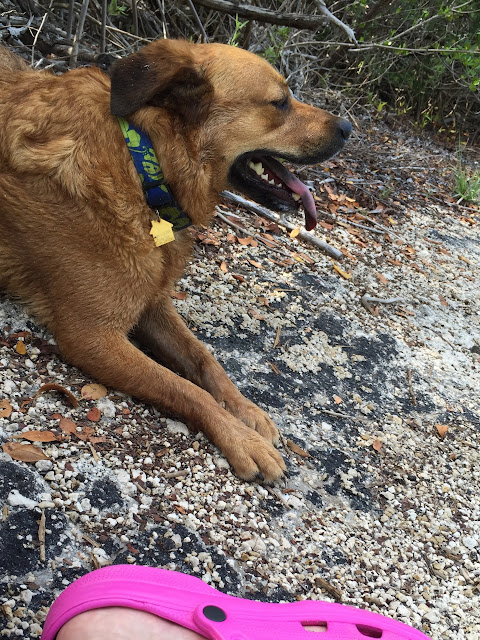 The mangroves are thick and the roots make walking impossible. How he found his way deep into the swamp I can't imagine but he loves the woods. I attribute this in large part to his heritage as a Carolina Dog, a breed of wild dog that went undiscovered for centuries in the woods  and swamps of Georgia and South Carolina until 1970. He is entirely at home here while the city and vehicles and noises put him on high alert. I need to trust his instincts in the woods as much as he trusts me to guide him in the city. We are getting there. 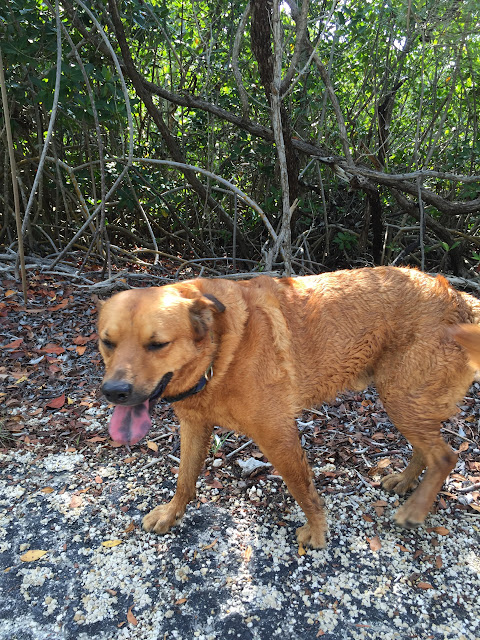 The mangroves are as thick as they appear behind him and he darts through them. 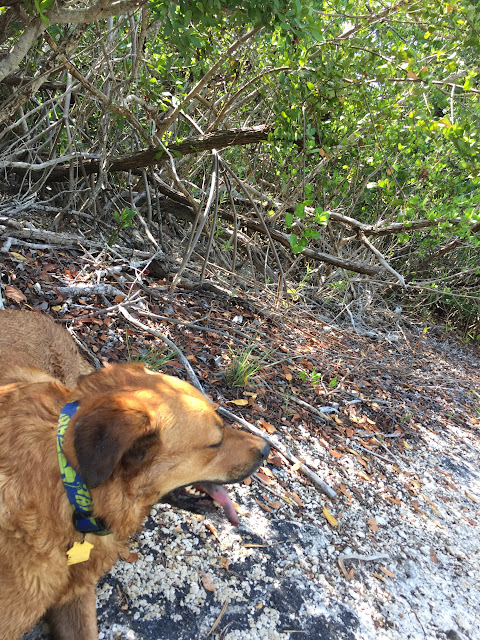 We meandered home, stopping to take a very long drink at the car,  and then a bath for the mangrove-wet dog. He handled the bath very well, I guess he is getting used to water and shampoo and towels, and then he passed out on his couch unable to keep his eyes open. 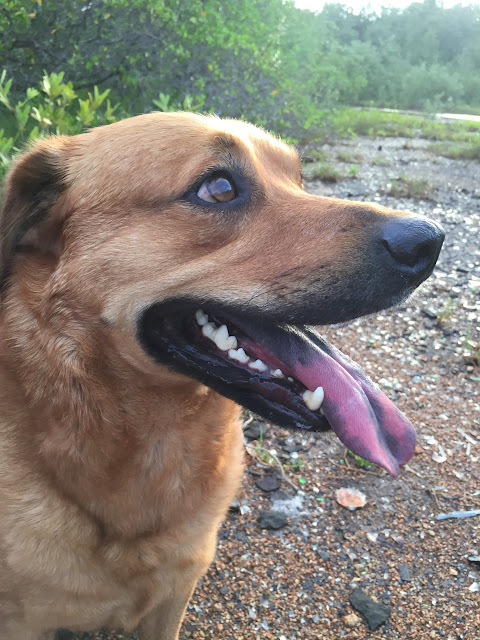 The fact that Islam specifically prohibits the keeping of dogs as pets means I am never going to become a Muslim, clearly, but my past as a Christian has opened my eyes to the fallacy of trying to make me believe the Earth is 6,000 years old or that wine can be blood or that virgins can give birth. So I will stick to walking my dog and leave the killing and the shooting and the arguing endlessly over insanity to others on Facebook and in the papers. Rusty and I are doing fine thanks, in the woods, unarmed. Were I to walk around with a gun the only person I would most likely end up shooting accidentally would be myself.
I captioned my Facebook picture; "The more I see people the more I like dogs."
Posted by Conchscooter at 12:00 AM 2 comments: