I confess, I have been very busy and not touring downtown Key West. My wife and I are starting a business which I hope will be ready for actual live sales in a month or so, long overdue from our initial start up date last winter but these things take time and we are trying to get it right along with our partner the hard working engineer. In addition to our day jobs much waking time is spent contemplating the numerous details that go into preparing for a launch. I cannot be more specific until our lawyer clears our patent and says its okay, because we live in a world dominated by laws (what a pain!) and the people who maintain them (thank God for them). My partner initially was questioning the value of a patent but after a year of grinding at the engineering wheel on my idea he has come around to the belief that supporting intellectual property  rights is good - in a big way. Trade mark- check, patent- check. Anyway I apologize for being a bit mysterious but I feel I have not been as on the ball with my blog, now 8 years old, as I should have been. Last year I was worried that the demands on my time might have impaired my ability to keep rolling out daily posts but so far, partly because the business start was delayed my blog hasn't suffered too much. Tomorrow is the eighth anniversary of my First Blog Post and I wish I had had more time to mark the occasion. So for the time being rest assured nothing much will change here and I shall do my best to bring my idea to market soon while keeping up daily posts about nothing very much except life in Key West. Much of which at the moment must continue to be obscured until my product is ready for nationwide roll out. Which will be a huge relief, as I am not patient by nature. You might even want to buy it if your extended family lives far apart. Indeed I rather suspect you will want to buy it.

Anyway this essay owes it's existence to photographs found elsewhere and attributed in the text. I was prompted to write this rather confessional post when I noticed Doug Bennett's post a couple of weeks ago about the new Starbucks in town, a store I hadn't noticed even as I have scooted by and that realization confirmed to me my head has been elsewhere lately. At first glance I find its presence rather annoying but discussing it with a friend I came to the conclusion that this chain coffee shop, if such we must  have in this deteriorating downtown, may actually prove to be useful.

I used to enjoy sitting in the window at Starbucks under the La Concha hotel on Duval but a recent renovation has moved the Starbucks to the side of the hotel so the only people watching available now is at the dingy side of Fleming Street. This place offers greater potential. Don't get me wrong, I do like my con leche  and colada from Sandy's and Jeana's and elsewhere but sometimes a seat and a table and air conditioning are nice even if you don't want alcohol. This might do: 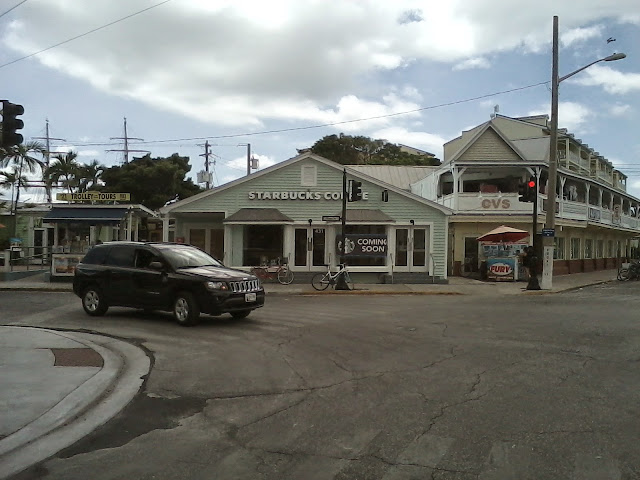 Both pictures are from Doug Bennett's blog: " This Week On The Island" and I am very glad he took the time to get them! This next one has gone, no more Burger Fi which is too bad. I got here just once and I liked it but something must have gone wrong because it's gone. 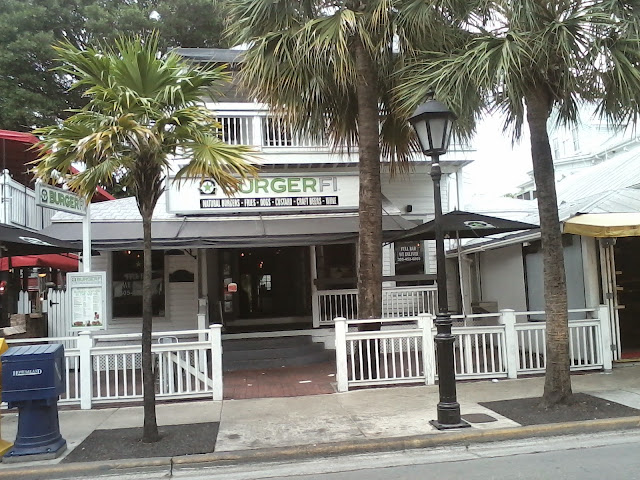 And now the new place, not so new as it's been open a month I believe, and it's thanks to the  Lost Souls blog that I noticed the Facebook Page whose photos I reproduce Here Below:

Joe's Place is open on Caroline Street at the spot previously occupied by JDL's Big Ten and previously JT's, both sports bars so I suppose televisions can only be expected in this new incarnation. The food menu seems okay, pretty standard stuff rendered I hope in above average form and the place seems to be doing well for which I am grateful. I too mourn the loss of Finnegan's Wake, and McConnell's on Duval is a sort-of substitute but I wouldn't mind a totally non Irish Pub replacement for my modest drinking needs if one were available. The Porch worked for a while but it's notoriety got the better of it and I am not nearly hip enough to darken it's doors again. Plus it's bloody noisy and has no food at all. Joe's Place might possibly be quirky and enjoyable even for a curmudgeon like me, with pleasant outside seating (dogs..?).

I shall have to give it a try at some point. However they aren't pushing their beer list so I am skeptical so far. I have managed to glean that Guiness and some craft beers are on tap so that's better than nothing but McConnell's has draft Smithwicks which is an attraction.

Perhaps before too long my business will be in the ether, my sales manager currently very enthusiastic will be even more so when he has a product to sell and I shall get to sneak away to see what is happening downtown in Key West. That would be nice. Here's to entrepreneurship and whoever told you it was easy told you a big fat lie.