I know I have made the point previously that we are appalling slugs in the Florida Keys when it comes to recycling. This innovation I found recently at Truman Waterfront which you would think would be everywhere. And Waste Management doesn't mind at all if plastics and paper and cans and bottles are all jumbled together. They couldn't make it any easier. 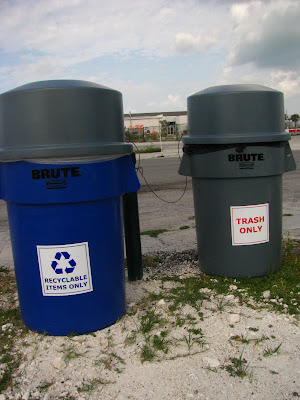 The resistance to island wide recycling is intense and rather unbelievable when you consider how close to nature everyone claims to be. The newspaper reported on a machine last year that reduced bottles to crushed powder and it was small enough to be installed behind the bar itself and used as the bottles were emptied. That idea flew like a lead balloon. Then you'll read comments in the Citizen's Voice to the effect that "I won't recycle my few bottles until the bars do," and no one will call that sort of truculent stupidity on the carpet so we plough forward. this rant was inspired by this trash can at the Ramrod Pool: 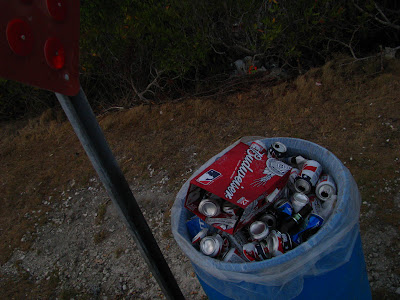 Give them credit for not tossing them in the mangroves or in the water but... Is it time to create some sort of redemption value for empty bottles and cans?
Posted by Conchscooter at 9:01 PM 7 comments: Links to this post 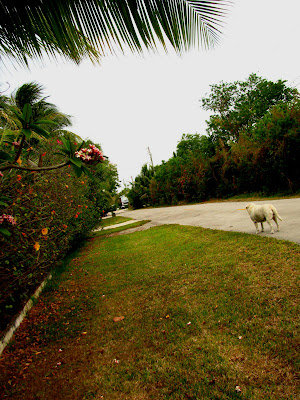 An overcast day leads to one walking behind an active dog and Cheyenne was trotting off down Warner Street on Little Torch Key. She ran out of steam soon enough and happily it was right next to a large hedge peppered with colorful blossoms. 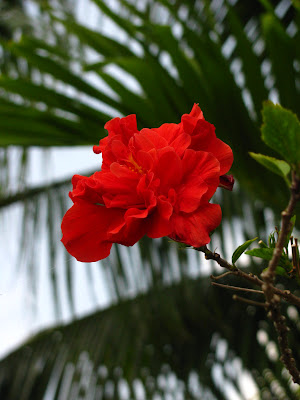 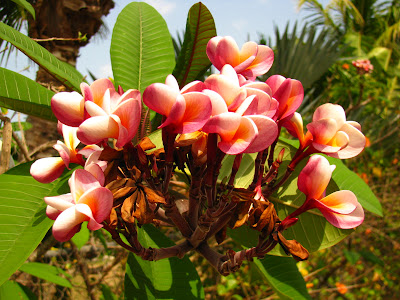 Even the house, barely visible through the profusion of growth was colorful. 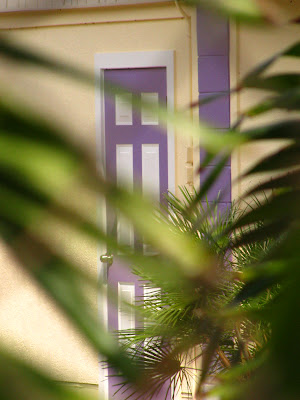 I hope the iguana that has been spending inordinate amounts of time decapitating my Frangipani gets severe indigestion. 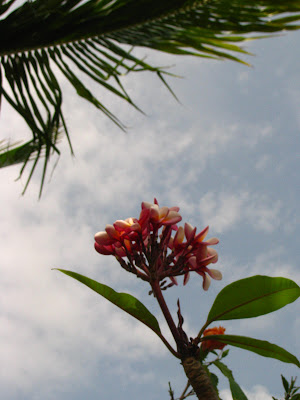 I think these other colorful blooms are hibiscus. 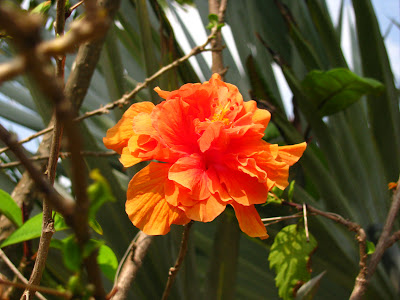 I got the impression the flowers were past their prime but the survivors made a lovely show anyway. 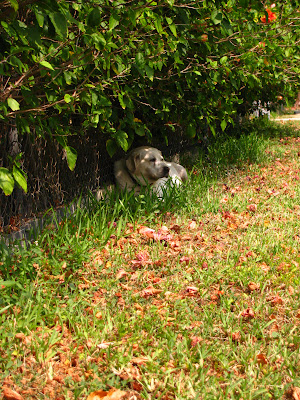 Not as lovely as my dog of course. 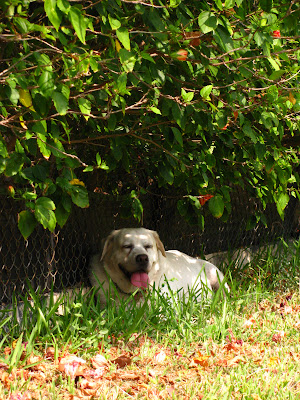 I feel bad for all the trapped dogs we pass, bored out of their skulls behind their fences yapping at the happy Labrador who gets to smell the smells that they can never get to. 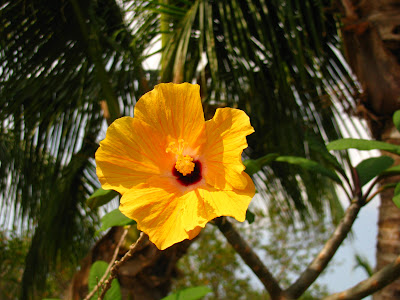 I should have plucked a bloom and stuck it behind her ear, my happy island girl.
Posted by Conchscooter at 5:01 PM No comments: Links to this post

Gary and I needed to walk off the magnificent lunch at Pepe's so as we headed toward Duval I figured to pay back an earlier ambush on Lazy Way Lane. 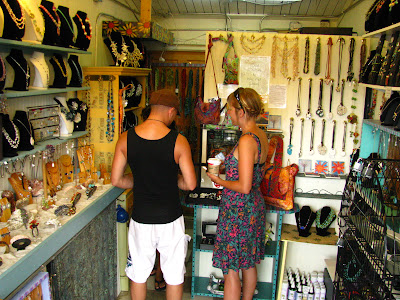 Customers were snagged at Bliss so Gary and I started to goof around until we were labeled as mere locals by the proprietor who showered my dog with affection. Then I introduced Gary to Sue and they started down a conversational path which left me on the sidelines. They talked about the best way to make, store and serve pesto, as one does apparently. 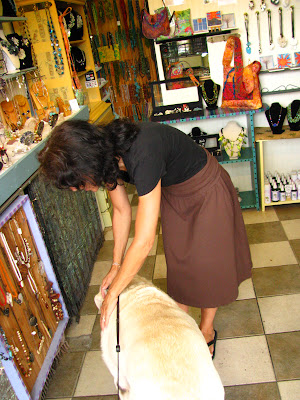 Then we discussed Gay Pride week, one of the first of a whole summer series of gatherings and events to keep the tourists coming. Sue showed us some of her creations made from something called sea stone which she drills and decorates herself. Of course my wife knew exactly what I was talking about so I think it must be a woman shopper thing. I think she will like the ear rings. 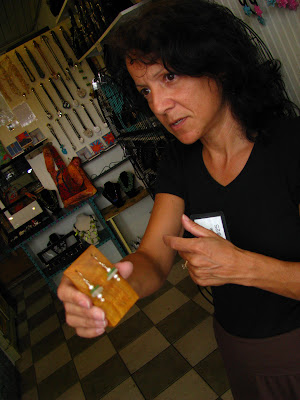 It seems Cleopatra passed through and misplaced one of her more florid necklaces in the store. Sue says it will definitely appeal to the more extroverted among us. As she isn't one of those she chose not to exhibit herself with this loud piece of work. 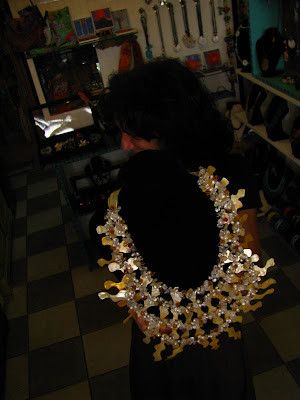 A graduation gift, possibly. anyway Gary and I stood around for a while longer and when some customers sidled past us looking anxious we figured we had done enough damage for one day and moved on, despite Cheyenne's passionate desire to lurk on the cool tile floor a while longer. And that is how one is supposed to amble round key West, dropping in and dropping out leaving unfinished conversations behind as one goes.
Posted by Conchscooter at 11:01 AM 5 comments: Links to this post

It happens from time to time that readers of this blog want to meet me, and as anxious as it makes me I try to oblige. GarytheTourist sent me an e-mail and after we failed to connect by phone he finally nailed me. He suggested this place whence I hadn't been in ages so it sounded good to me. 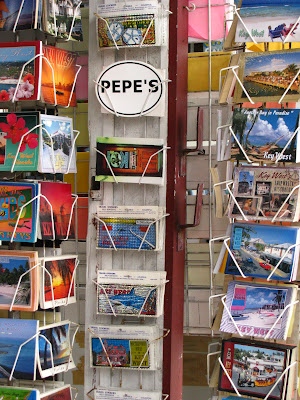 When I started this blog four years ago this week as it happens, I planned to keep myself out of it pretty much and just take pictures of where I lived. I have kept into the pictures from time to time over the years and Gary had been keeping an eagle eye out for me so he knew who I was when I stumbled in, even though I was wearing Birkenstocks and not my tattered pink Crocs. I need a new pair from the store called Neat Stuff on Flagler, as far as I know the only supplier around here of Size 12 pink Crocs. 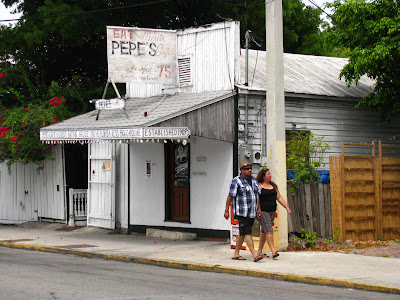 Anyway I made it to Pepe's on time and we sized each other up. Gary has a daughter going to college soon and a dog that isn't. We talked dogs as I have no idea what daughters involve. 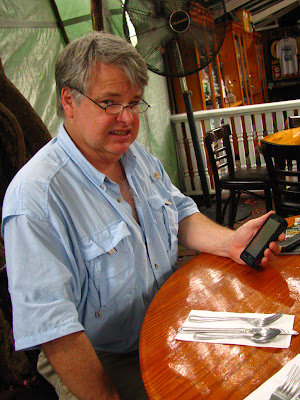 Marcie was our cheerful server and I managed to engage her in modest conversation without bursting a blood vessel so that was good. I always feel as though chatting up the servers is an imposition as they have a hard enough job as it is without having to pander to the customer's need for conversation. Apparently I am all wet about this and I need to change my attitude. It was a horribly self indulgent lunch. I had an Anchor Steam for an appetizer, I love that beer from San Francisco where, when I drove a truck I used to deliver to their family owned brewery right in the city on Third Street as I recall. 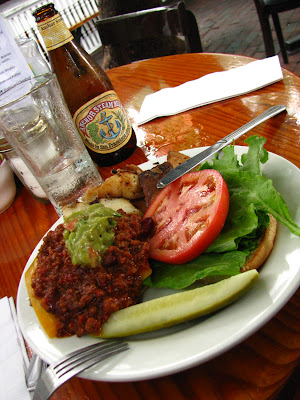 For the main course Gary had the fish sandwich on the grounds they don't have decent fish in Tennessee which I suppose could be true but the woods up there are very pretty as I recall. As I don't live in a land locked state I had the guacamole burger which to my surprise and delight came with a healthy dollop of chili. Marcie returned with the second Anchor Steam to wash down the meat and I was happy. 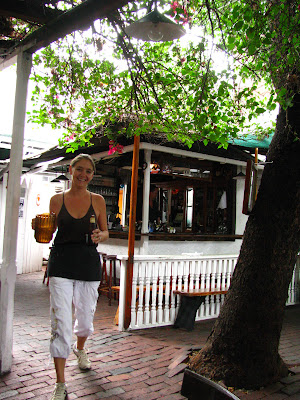 She smiled a lot. The mainstay of a decent meal is conversation so Gary and I engaged in that. We set straight the confusion of modern health care coverage because he is an anaesthesiologist by trade. He also kayaks like a demented fiend and was planning a marathon paddle through the back country which made me feel faint just talking about it. The Anchor Steam was an excellent antidote. Then we had pudding and i should note that Gary was the one who insisted we share a Key Lime Pie. 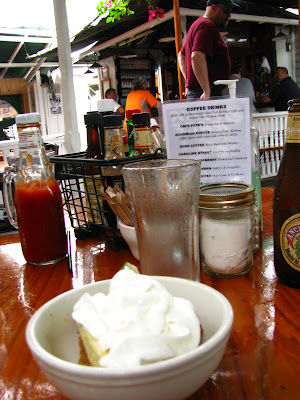 I thought it was quite good. It's not as tart as the home made one at Parrotdise on Little Torch key but the crust was crumbly and I liked scooping it up with the molten remains of the whipped cream. We sat back and burped. 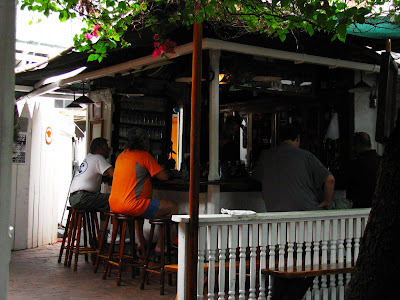 Well, actually we were rather more polite than that, though in retrospect it would have been manly to sit around and eructate. 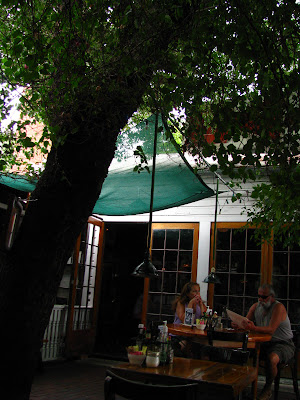 The food was good, the setting was pleasant and the conversation didn't dry up leaving awkward pauses so I think it is safe to say the lunch was s success. 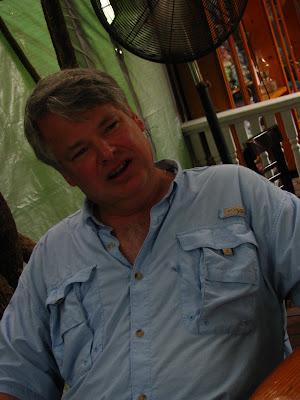 Gary has promised to meet me again for a late breakfast and he has also promised to drop off some key West pictures I shall use in July. He has plans to go kayaking off Big Pine as well so perhaps he can kayak round to my house so I can watch him sweat horribly as he begs for a glass of water. Pictures to follow.
Posted by Conchscooter at 5:01 AM 7 comments: Links to this post

I was ambling with Cheyenne along Caroline street when I got passed suddenly by these characters. they paused for a moment to check their maps, then determined the Ft Myers Ferry, I'm guessing, was one block further so off they went racing their bags along. 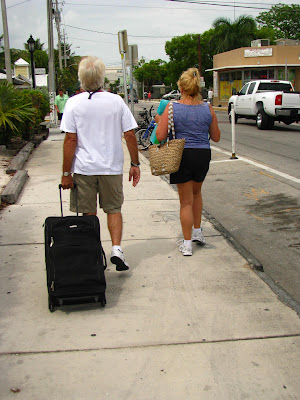 Cheyenne and I were no match for the power walkers and they left us in the dust. Walking into the parking garage I saw his wildly decorated van and it occurred to me that such a service is actually a brilliant idea. They collect your luggage and store it for you. 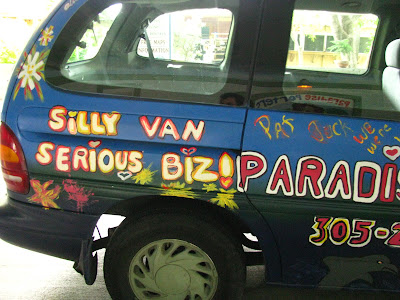 I checked the website http://www.paradiseporters.com/ but it makes no mention of delivering bags to a guest house which seems kind of obvious to me. They also ship luggage home so you don't have to deal with traveling with it. They had a bunch of customers around the desk so i didn't feel like asking questions but I figured it would be quite handy to park your car at the city garage for $13 a day and have these people deliver your bags if you were staying at a parking-free guest house in Old Town. 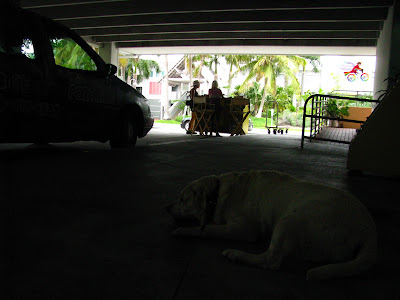 Cheyenne liked the cool of the cement in the parking garage after stumping the hot streets. 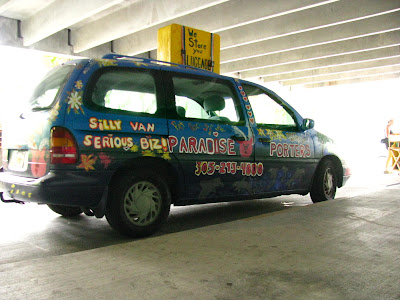 This is one of those services you don't really think about but when you see it, it makes perfect sense. 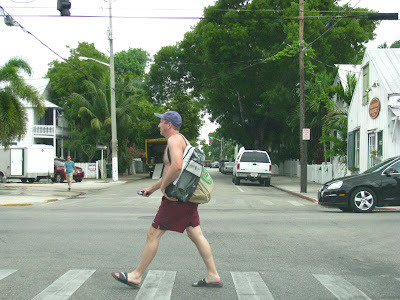 I'll bet he could have used it instead of humping his sweaty bags around on his back. They also interrupted his tanning...
Posted by Conchscooter at 12:01 AM 1 comment: Links to this post