I decided to leave Rusty at home for a few hours and see what happens. Our neighbor was on dog watch to see if he barked, and I moved as many vulnerable things as I could to avoid getting them torn and off I went. First he tore out the dog door panel. 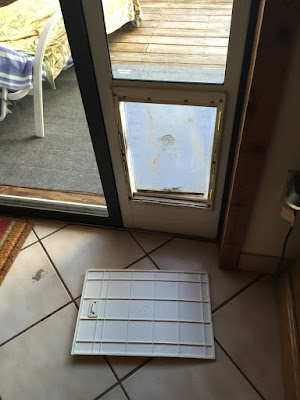 My wife got a text from Brian with a picture of Rusty sitting composed in the driveway, paws crossed watching the world go by- "Is this your dog?" I was stunned. How the hell did he get out?  The house was closed the gate was in place at the top of the stairs when I left and now he was outside. Brian apparently took him back in but that did no good at all. 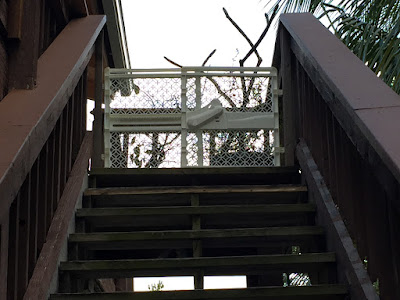 When my wife rushed home the gate was up, the ladder was down and he slid through the bars onto the stairs apparently. 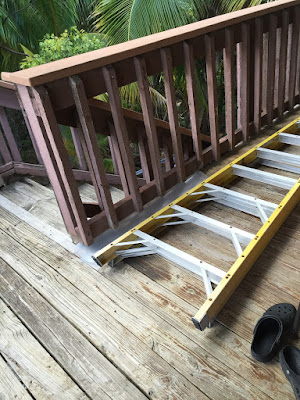 He was in his new favorite spot and came running out when my wife got home. So the moral of the story is trust the dog. I don't know what else to do. He didn't wreck the house or bark or shit in the neighbors' yard. He just sat outside glad to belong and have a home. Luckily I live on a quiet dead end  and apart from my asshole snowbird neighbors who bitch and moan and complain about everything and everyone it's a street without drama so Rusty will likely get to see little action. But if he's happy and relaxed I am too. 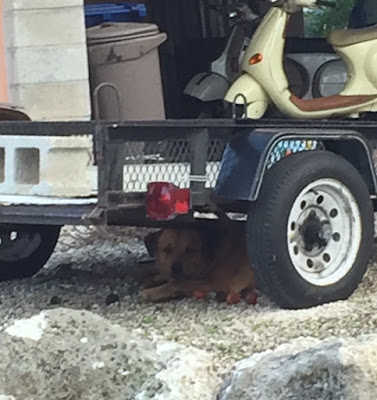 I have got myself a very interesting dog. I'm glad he likes being at home. 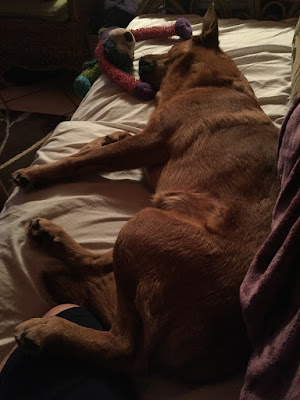 The food truck phenomenon is all over the place, not so much in Key West but mainland Florida with splendid night time weather has embraced this way of eating. Monday nights it's Arts Park in Hollywood at the circle in the middle of town called Young Circle. 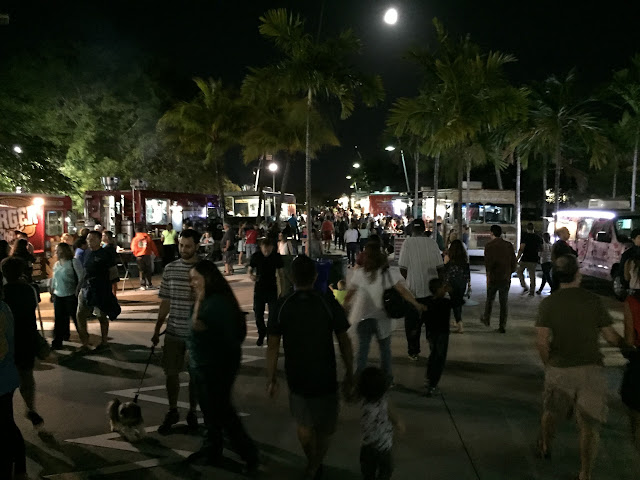 The line up this past week was endless: 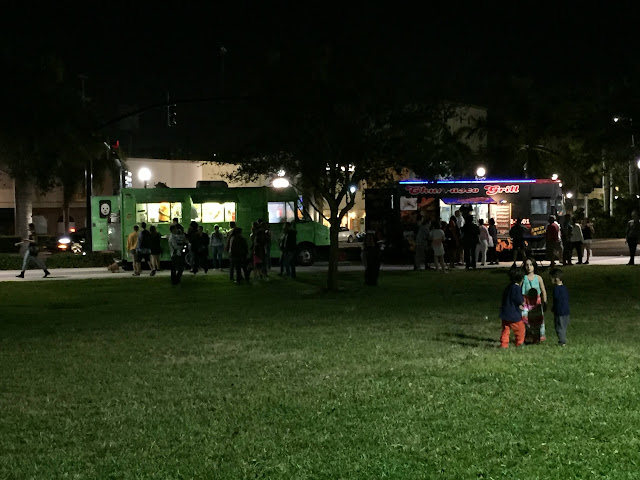 I got overwhelmed in short order but my wife and her sister marched off to check out what was on offer. 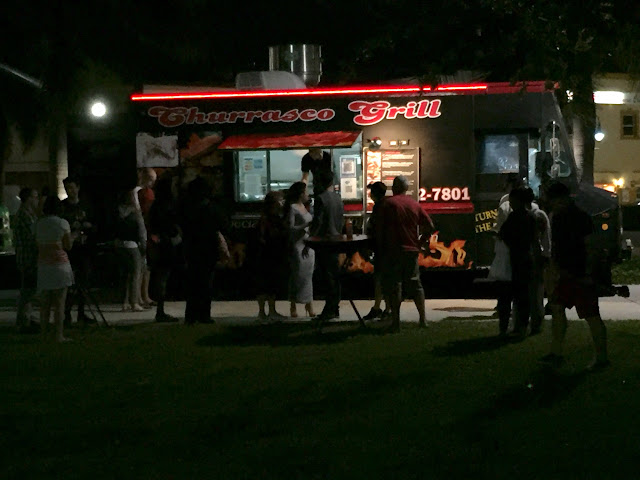 I have no idea what sort of a living one makes cooking in the back of a van but young people seemed to make a decent date night out of it. 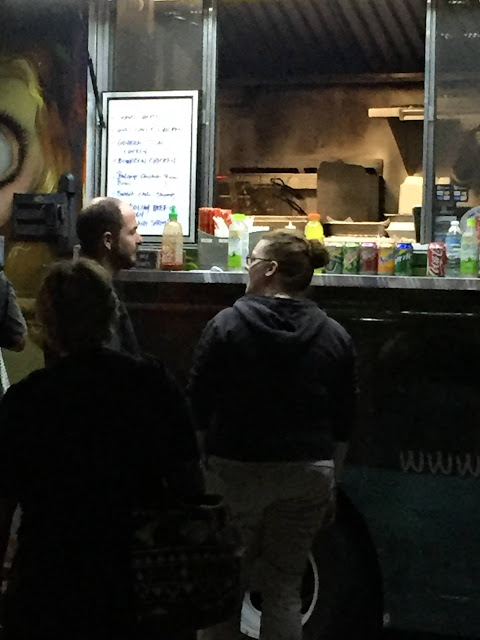 The lines were long and after ordering there wasn't much to do but stand around and wait. Cause for conversation! 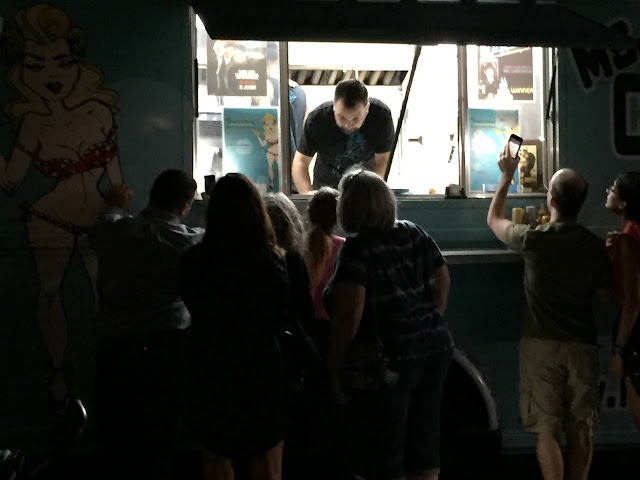 I was looking after Rusty whose brain must have been blown by his change of fortune. A few weeks ago he was an unwanted dog on the margins of life and now he was being petted and admired by strangers and welcomed into the middle of crowds. He took it like the stoic he has become. 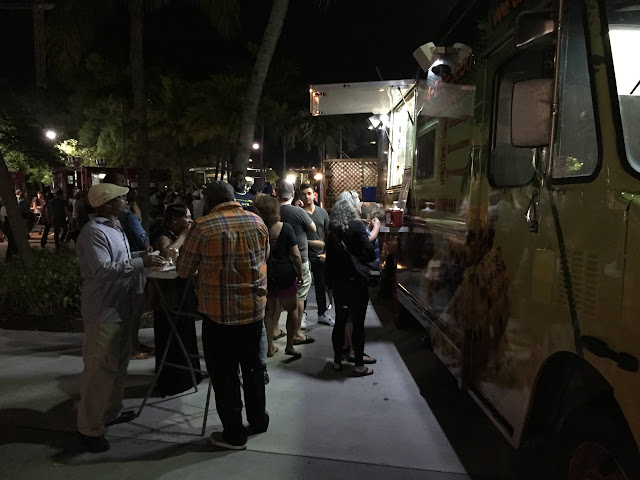 I tried to wander but the crowds were thick and I had no idea what I wanted to eat. 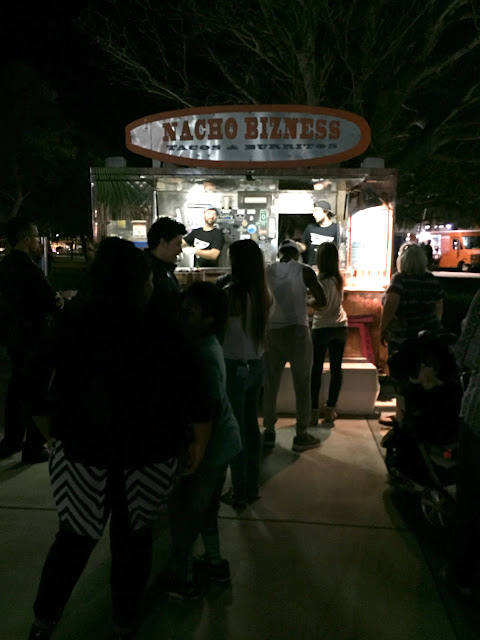 I left the decisions up to my wife. These guys yielded crab fries and a thick wedge of caramel bread pudding. Food trucks tend to go with  substantial fare it seems to me. 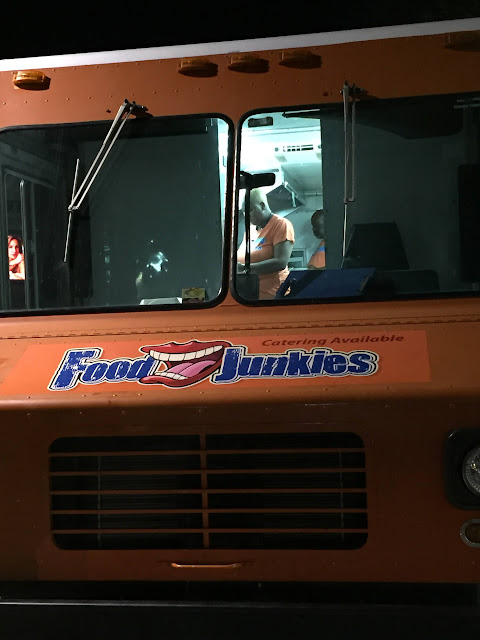 Rusty was totally absorbed into people watching, too entranced to be scared. 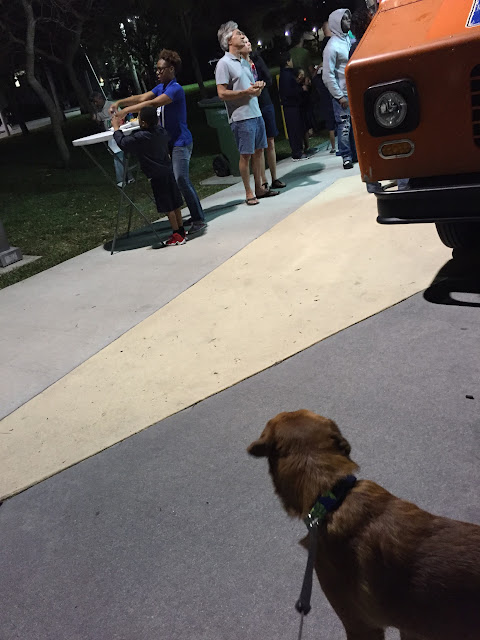 Ms Cheezious sold grilled cheese sandwiches which I thought an odd choice but we had a couple of theirs. 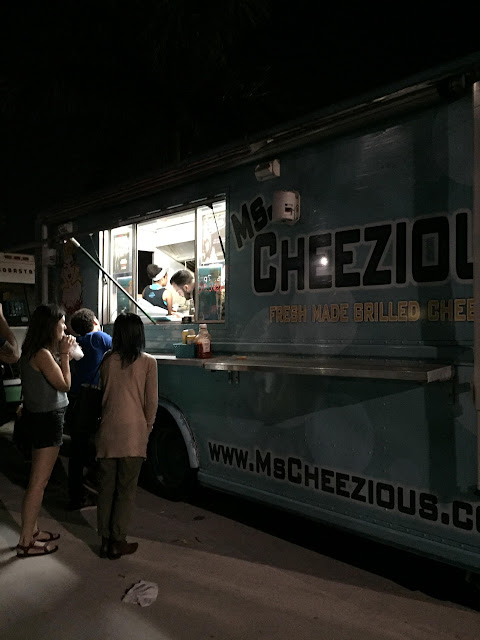 Burger Beast claims to have the most up to date list of trucks and locations:


2015  was the year of Chef Robyn Almodovar on Food Network where she won an episode of Chopped and also won Cutthroat Kitchen. My wife noticed her South Florida base, along with her truck "Palate Party" and noted them down in her phone. She was quite pleased to be recognized. Her crab cakes really were very good. We ate them on the spot. 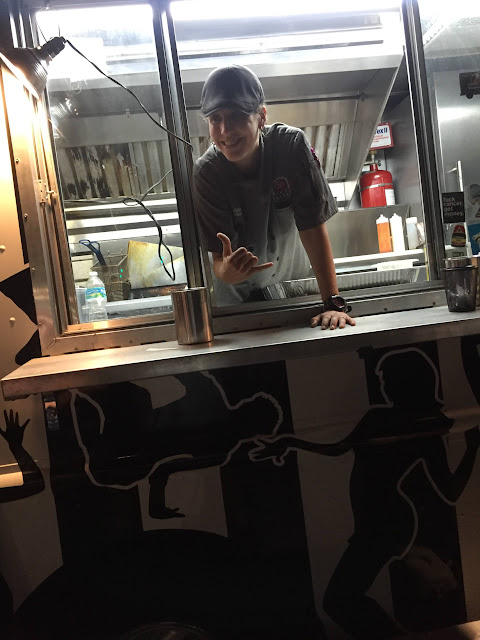 My patient dog, navigating the chaos with the aplomb of an old hand. I hope he enjoyed being in the middle of middle class life as a participant. 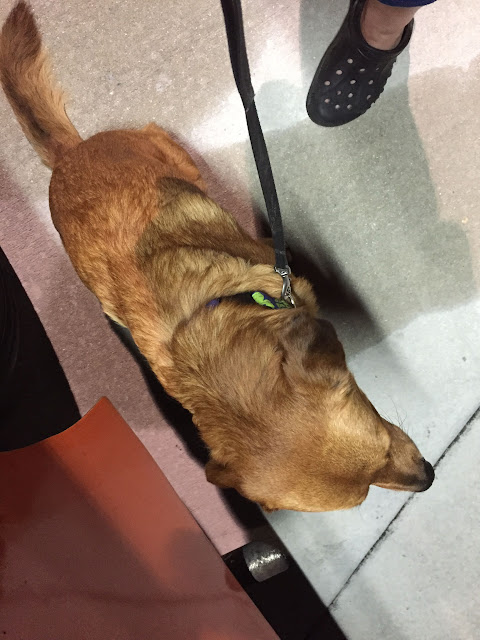 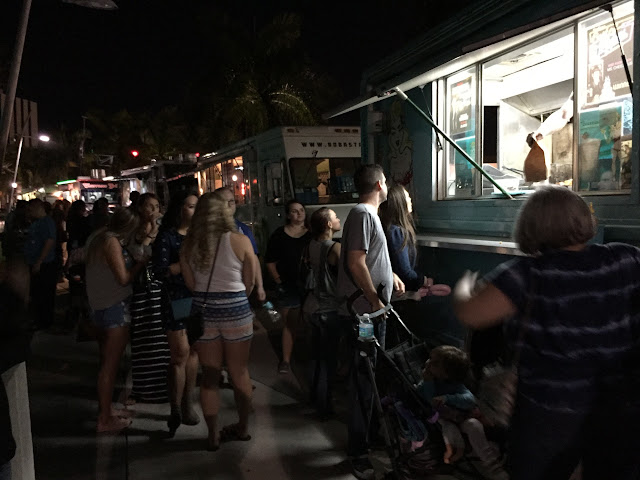 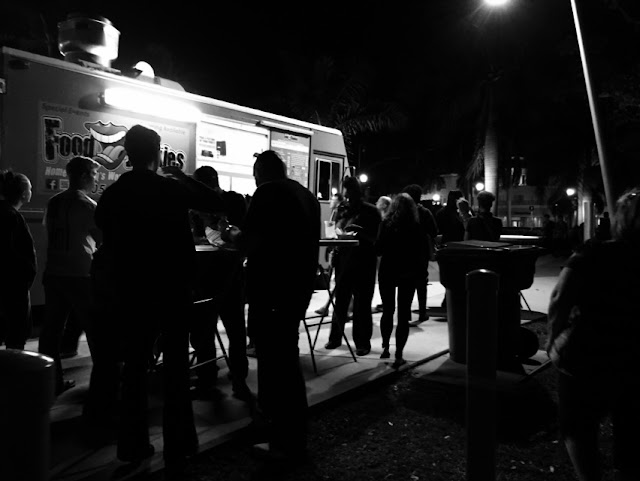 My sister-in-law studying the menu: 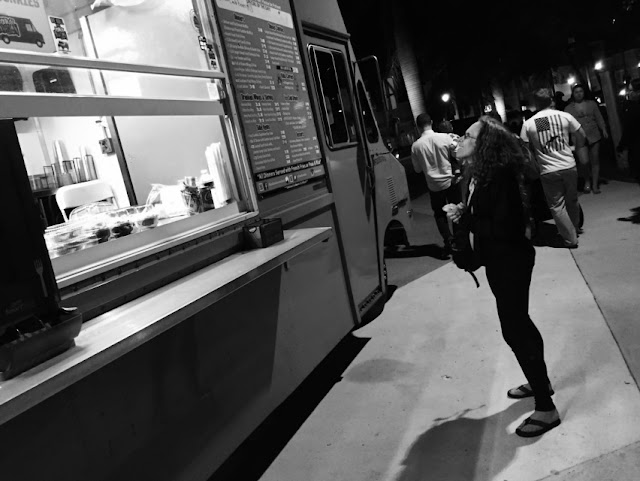 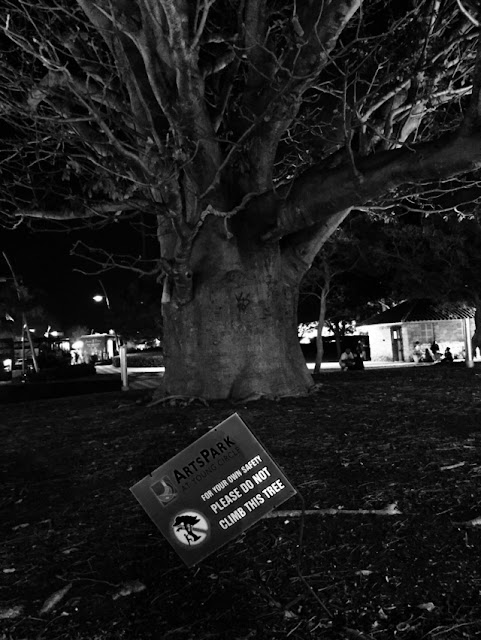 The crab and fries: 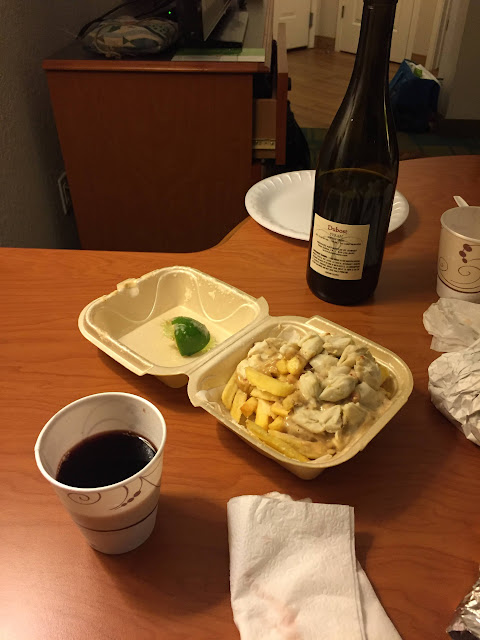 The bacon and blue cheese grilled sandwich. Perhaps it was bleu cheese but food trucks bring out the pleb in me: 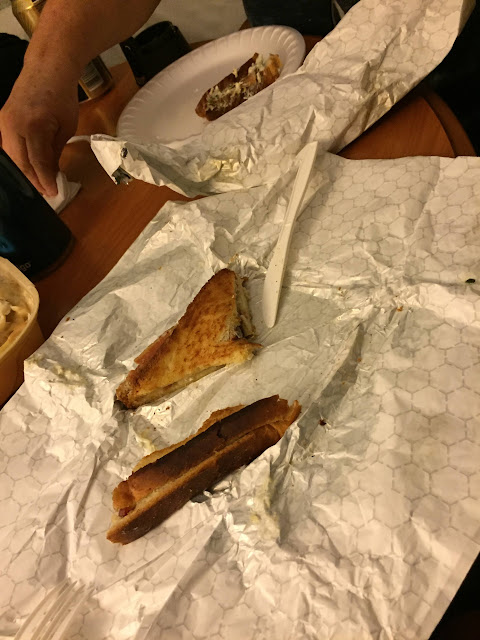 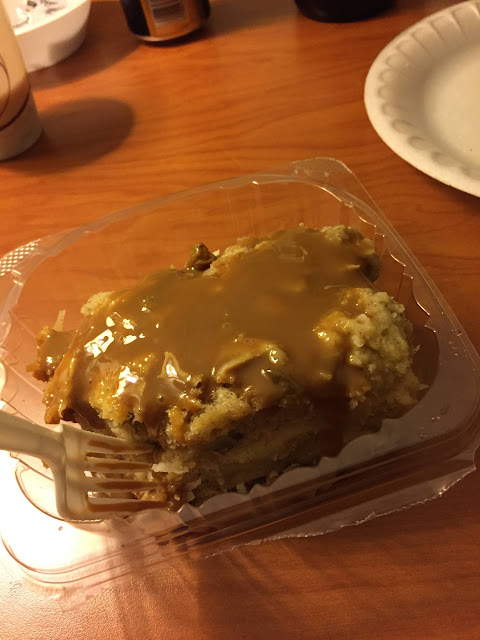 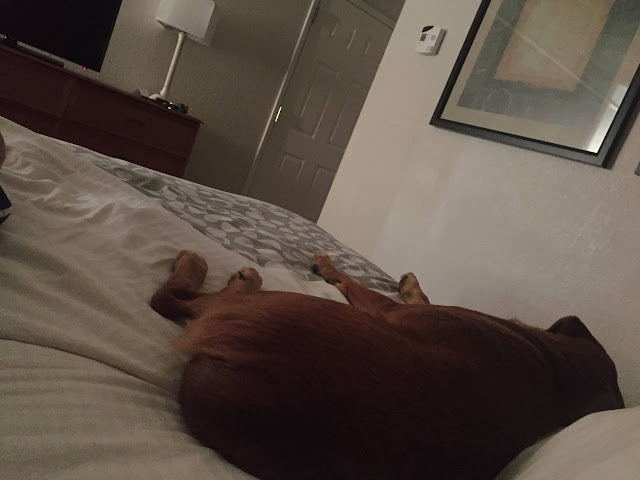 What an interesting evening.
Posted by Conchscooter at 12:00 AM 6 comments: