I put my foot down. Pick me up before lunch, we’re eating out not bringing in. That decision opened up a whole new set of possibilities for lunch. Well said Robert mulling our choices...The elevator was  closed for  maintenance so Robert carried my walker as I took the stairs one careful step at a time. I confess I panicked for a moment thinking we might have to eat in after all, not a crisis but I did want to get out into the cool winter sunshine. 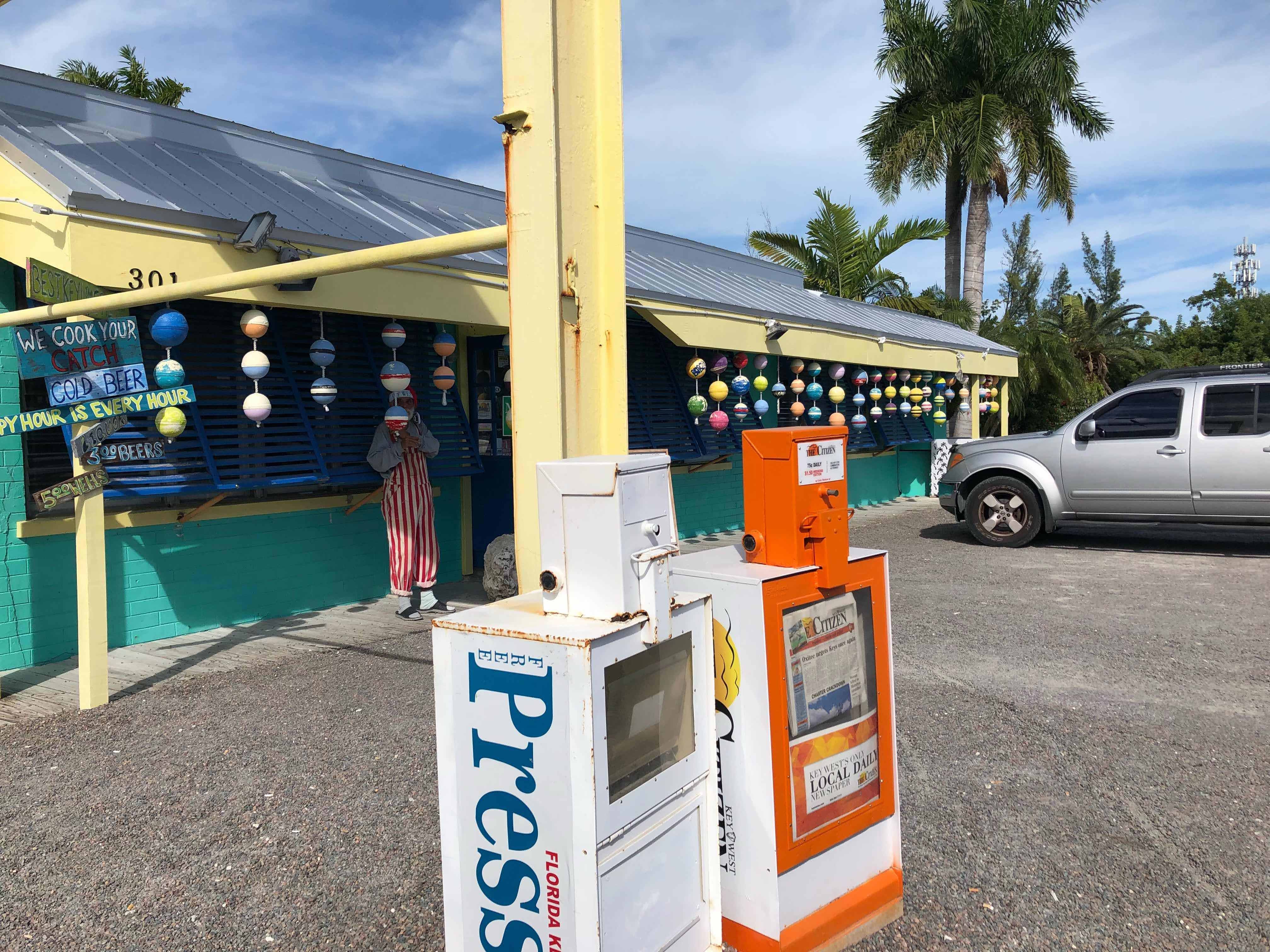 It’s not a great picture but this is the spot we chose for lunch: Bobalu’s in Big Coppitt alongside Highway One. It’s a diner that’s been around forever and even though we used to eat there I haven’t been back in... forever. They do the usual, fish and pizza but also home cooking but my wife makes a mean meatloaf so you don’t go out to get one. Thus we kind of never went back. Silly really. They make pizza and my wife doesn’t. 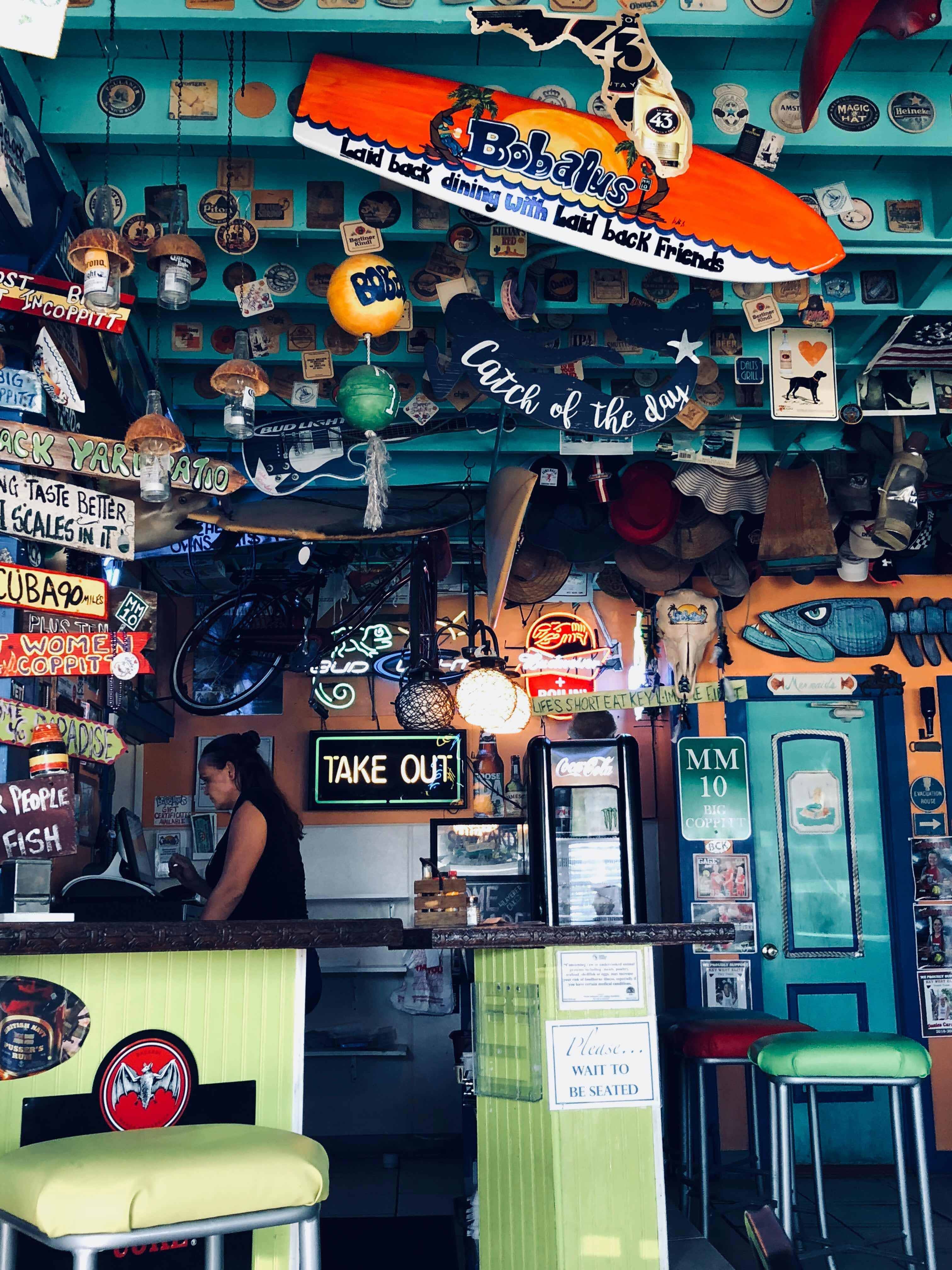 The interior decor has the usual funky island collection of stuff that says The Keys to visitors. Unlike a lot of places Bobalu’s doesn’t look like the dust catchers catch a lot of dust. There is an air of sanitary cleanliness to the place, as though someone polishes the many ornaments. 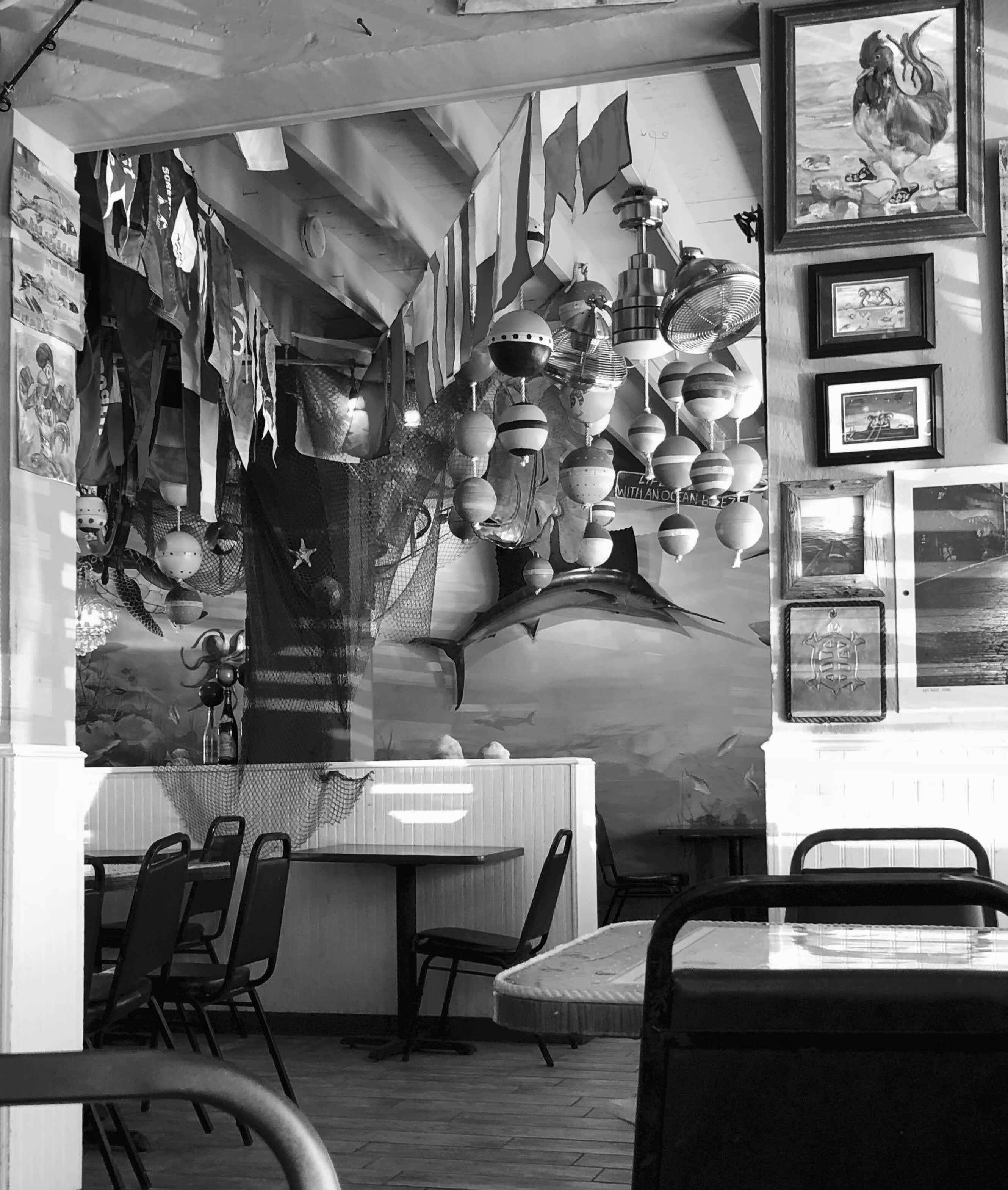 Robert was in the mood for pizza and he’s a much more fussy eater than me so I let him do the ordering. We met in 1991 which we calculated was almost 28 years ago when we were each sailing the Bahamas. We met at Hall’s Pond Cay in the Exumas when Robert organized a gathering at what was the abandoned clubhouse on the island. He unloaded a mound of stuff from his 27 foot sailboat, a deep fryer an electronic keyboard, chairs, cooking tools rather like Mole in the Wind in the Willows going on a picnic. I learned early on Robert is a collector where I am always ready to clear out the surplus in my life. 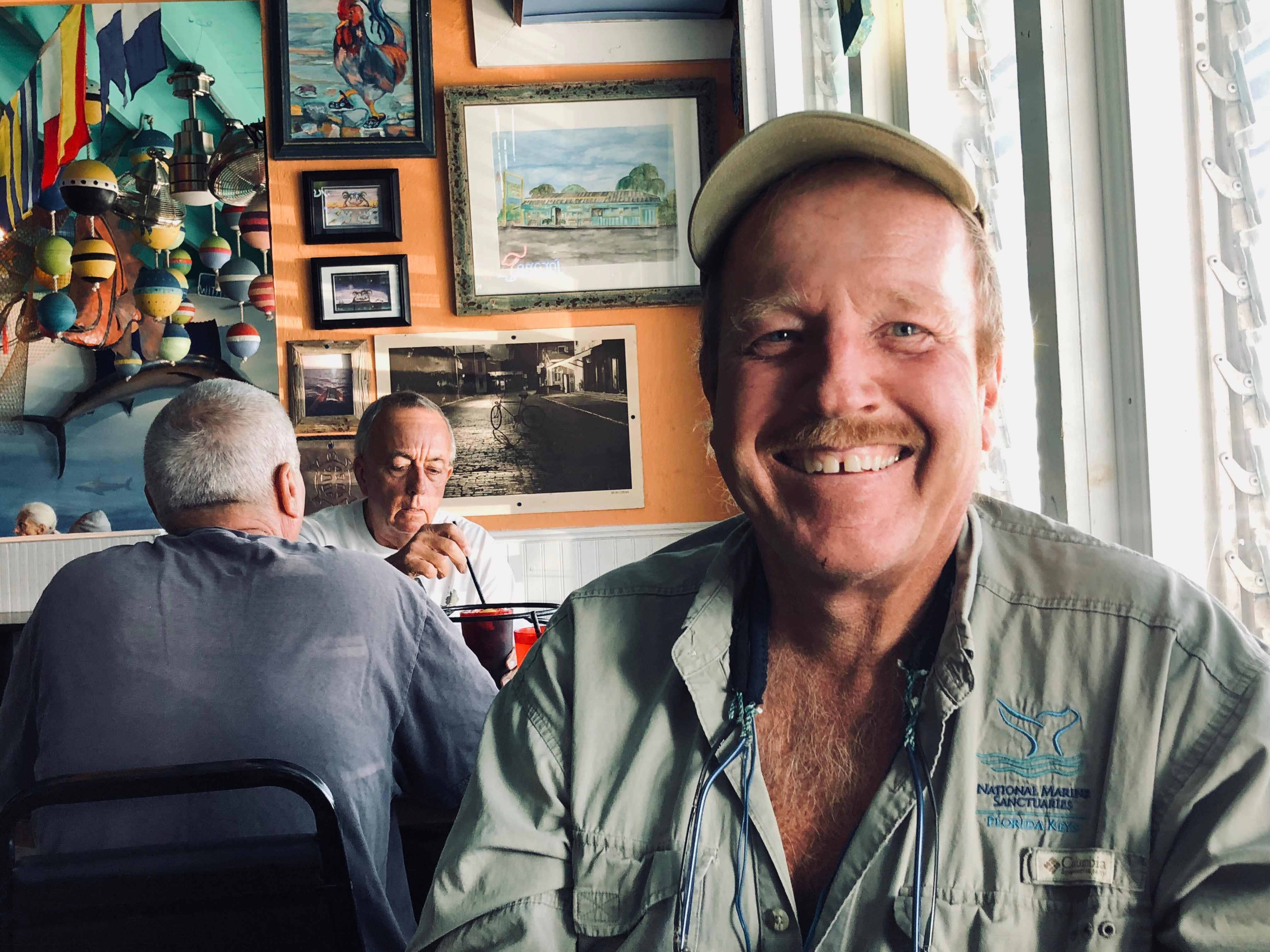 It was one of those magical moments in life when all the parts come together and in Robert I found a man whose life I admired. He’s a gentle soul, kind and thoughtful with a reserved sense of humor and an unrelenting commitment to the environment. His energy in the service of the coral reef exhausts me. 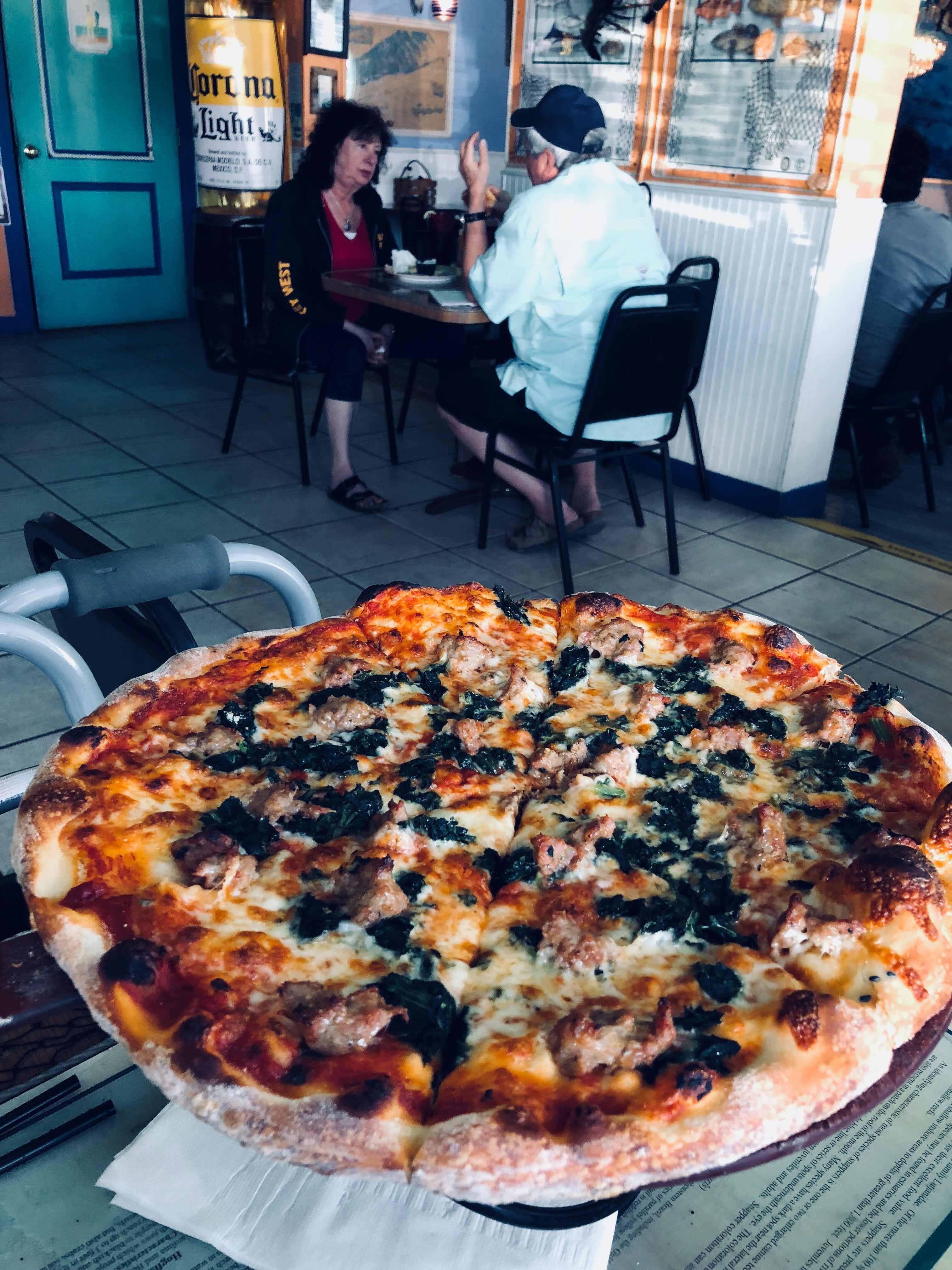 And he knows his pizza. This fourteen inch disc tasted excellent, better I dare say than the picture might suggest. It was not greasy and the crust was firm and crisp as advertised. We ate four slices each in a bow to the flavor of the food, our gluttony and the extended conversation. 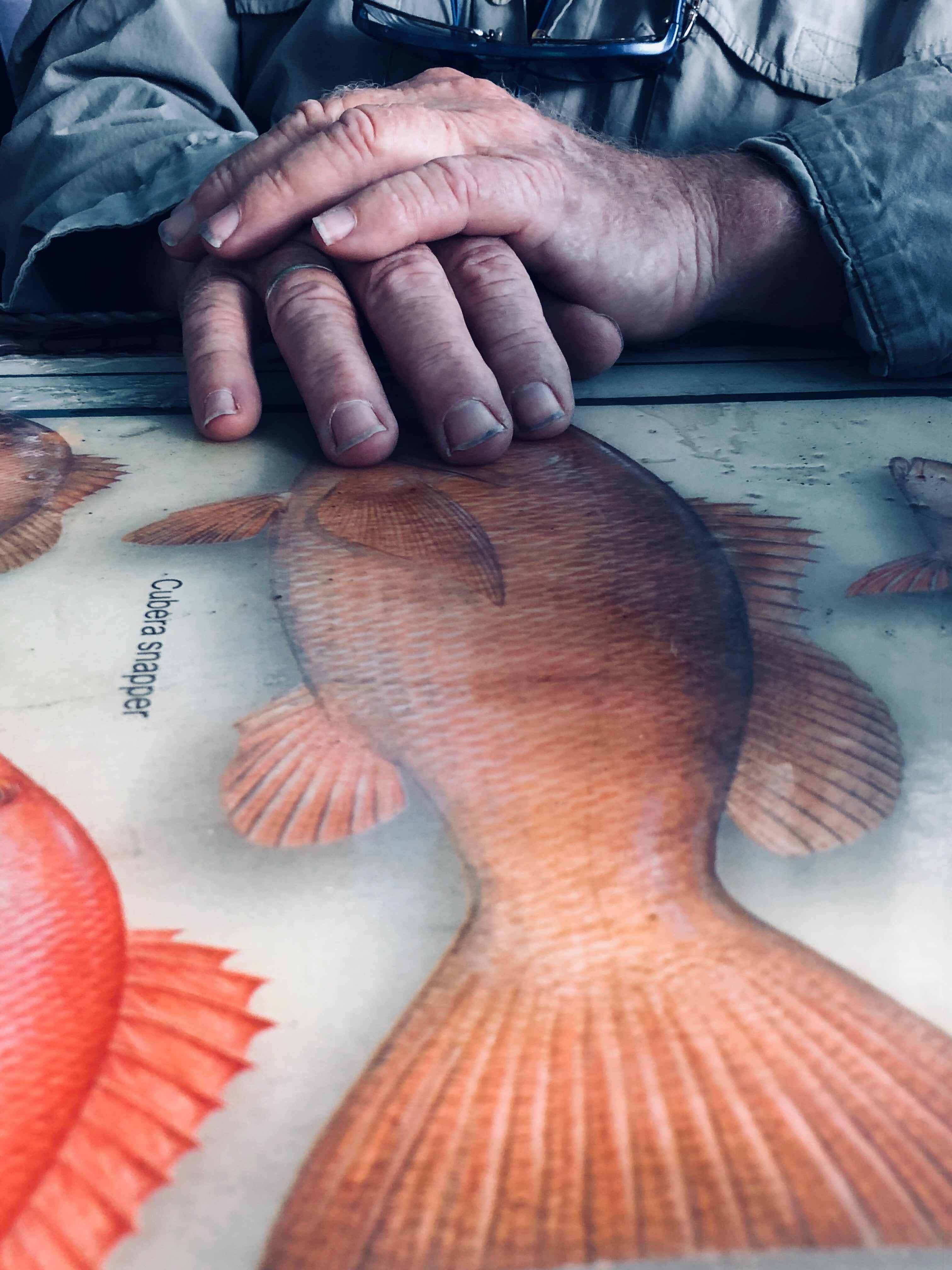 In his life in the Keys Robert has worked as a commercial fisherman, managed a garage, run charter sailboats, worked for the Marine Sanctuary and is now retired with his still working wife on Cudjoe Key, ironically not far from me. He was in a nostalgic mood and we talked about the intersections of our past, including our adventures on the water and now his struggle to streamline his life in preparation for this final chapter, retirement. It was an excellent lunch. I asked my generous friend for a favor. 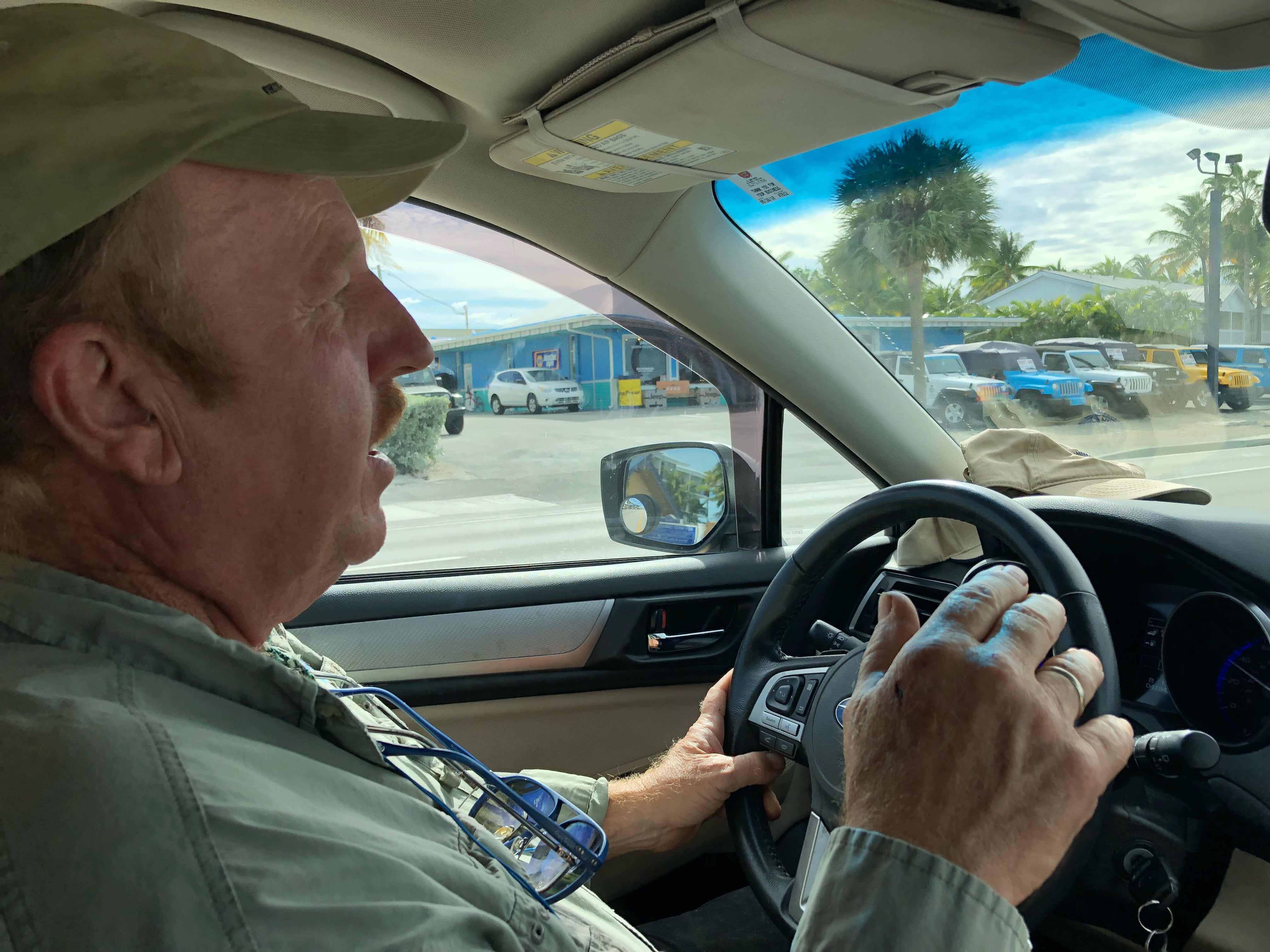 He took me food shopping. I had a list from my wife and  I am always anxious to ease her workload so he drove me to Publix to complete this chore. I made the acquaintance of the electric shopping cart they provide. 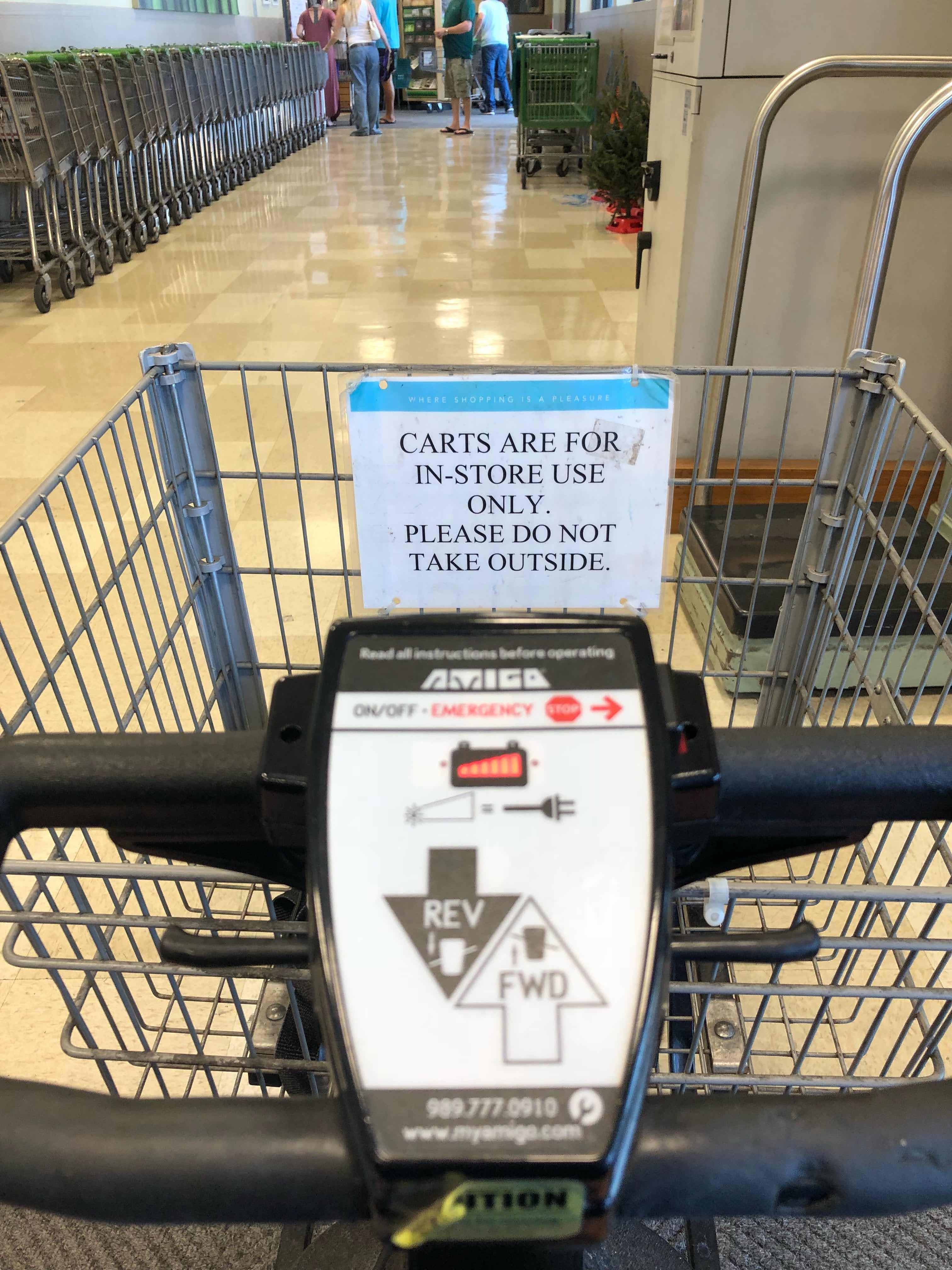 Simple enough to use I pivoted into it from my walkerwhich the  manager took for safe keeping at the customer service desk. Publix employees were brilliantly helpful and thoughtful. We went shopping. It was as usual a different experience gliding through the store. I checked items and Robert trotted off to collect them. Some things I was looking for needed help from people who were standing and could reach them but everyone was kind. I met another guy in an electric cart and challenged him to a race.  He perked up. Just because we are handicapped doesn’t mean we can’t have fun. 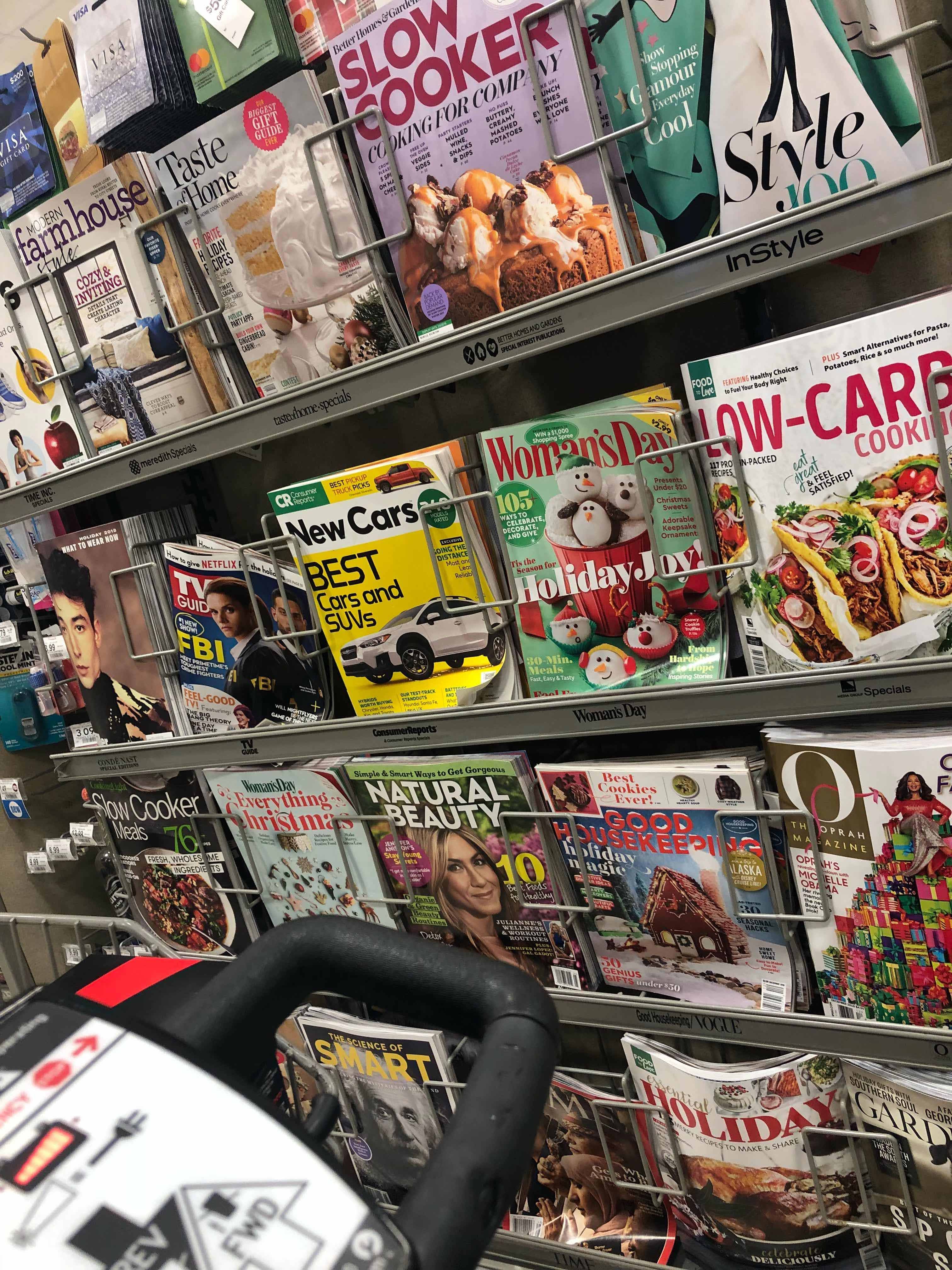 Shopping was a pleasure even though the cart made the maddening beeping as it went into reverse, though it is a sensible safety feature as I had trouble seeing over my shoulder. I am getting used to being out in public at wheelchair height but it was a busy day so there were lots of willing customers ready to help me reach for stuff. 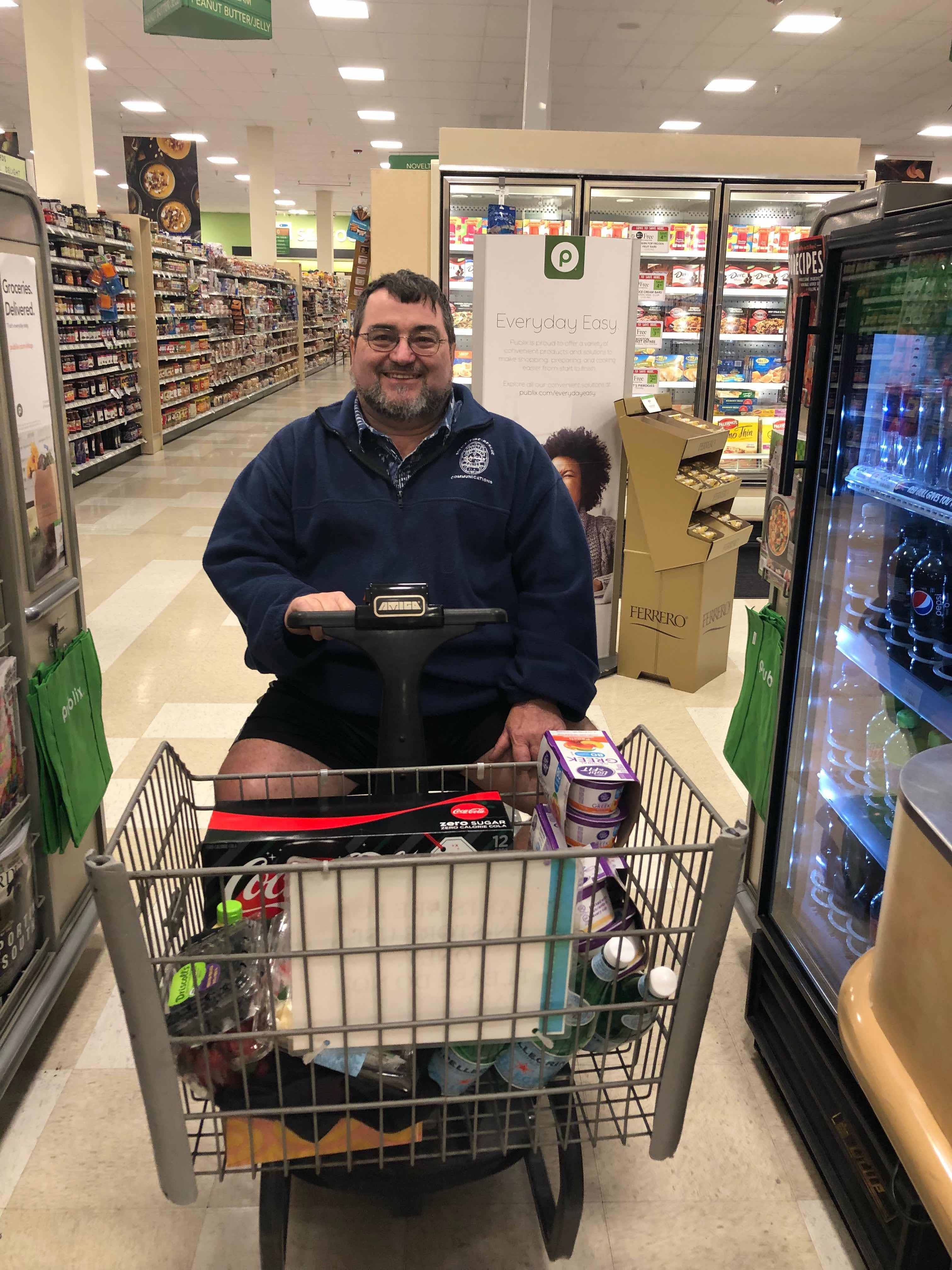 Thanks to Robert I had another useful learning experience on the slow road back to being able to walk.
Posted by Conchscooter at 12:01 AM 8 comments: