From October 2010 (so long ago already?) I really like this essay on bikes in Key West.

I start this essay on cycling in Key West with a picture of a man taking his ease in Bayview Park. 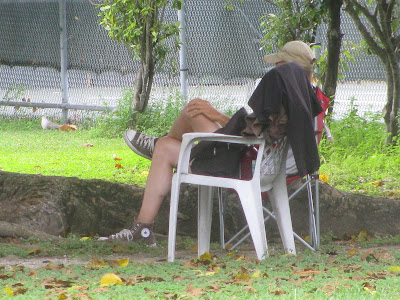 His bicycle laden with belongings was just out of the frame. Bicycles in Key West are basic transportation, for workers, professionals, tourists and even the unemployed homeless. 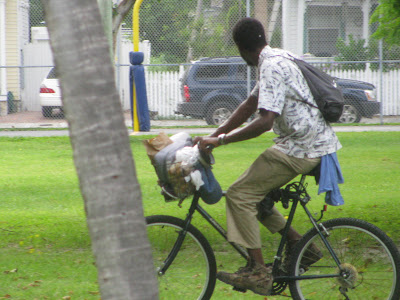 I like to photograph the cyclists around town from time to time as a reminder that this town is the eco-delight that promoters of cyclists envision when they stand before city councils and commissions across the land to promote urban cycling. Not as recreation, but as daily transportation. High cost brand name cycles are the rarity rather than the norm around here. 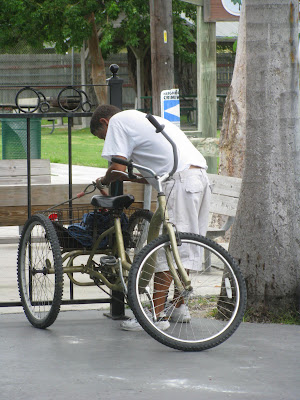 Willie Ward Park has some rather pleasant shelters to hang out under as you while away your day waiting for the soup kitchen to open on Flagler Avenue. 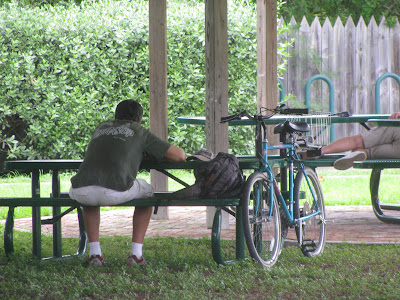 Tourists use bicycles as a fun break from their daily reality at home. Too bad they can't imagine getting used to cycling when they do get back to their daily grind. 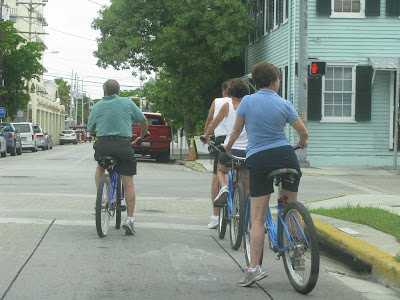 I have noticed a different kind of pedi cab rider lately in Key West. It used to be the preserve of East European young men pedaling energetically. Now I am hearing more Americans talking to their passengers as they pedal. Perhaps the world of pedicabs could be promoted as part of the political agenda currently sweeping the land to get Americans into jobs held by immigrants? 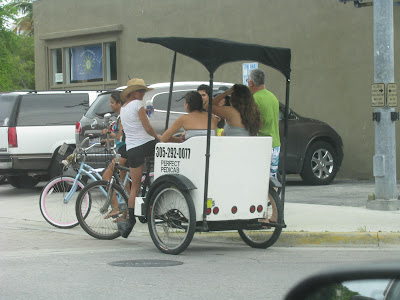 A bicycle, a basket and Old Town is your oyster. 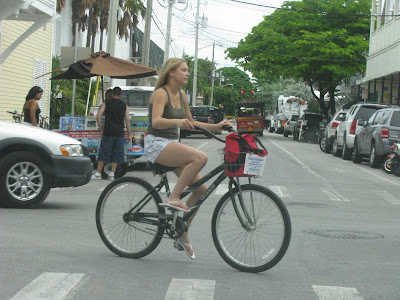 I noticed these three vans (how could I not?) jamming Southard Street at Whitehead. The minivan as billboard. It takes a bicycle to get past these heffalumps blocking the road. 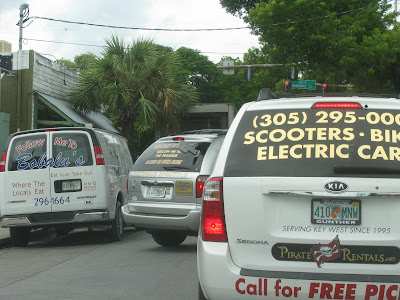 When I was between dogs I used to bring my bicycle into town on a bike rack on the car, park the car at work and take off around town on two wheels. A bike rack is a great thing. Now all we have to do is persuade the nutters who run the Lower Keys Bus Shuttle to put bike racks back on the buses. They took them off when they were too successful. 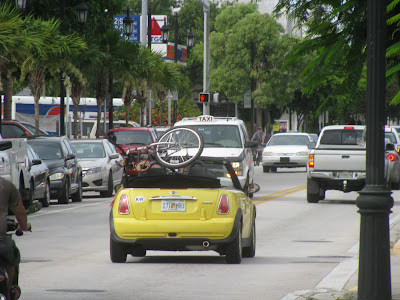 A gentle pedal on Georgia Street is a fine way to spend a morning. 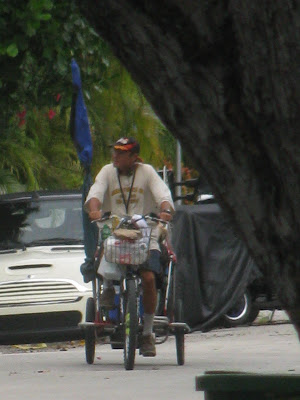 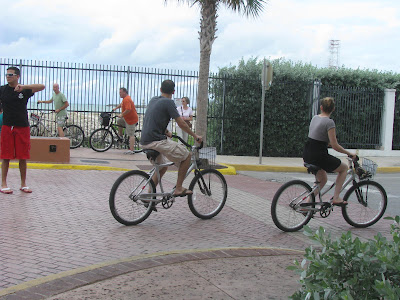 Backwards and forward at Whitehead and South Streets. 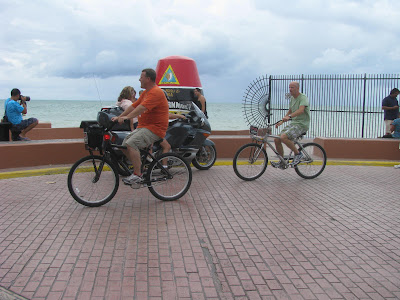 There is a city commission looking into improving cycling conditions in Key West. Some people want more dedicated bike paths but it seems to me that in Old Town you'd need to make streets one way to accommodate a bike path and I can't see motorists agreeing to that. 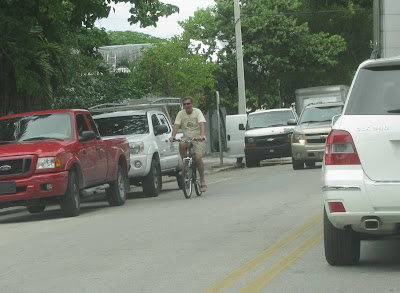 Riding and not texting. What a concept! 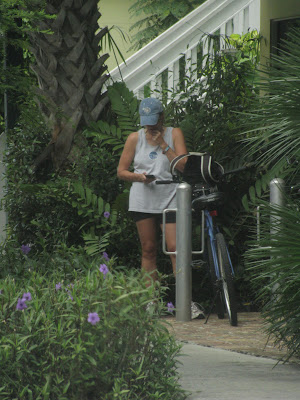 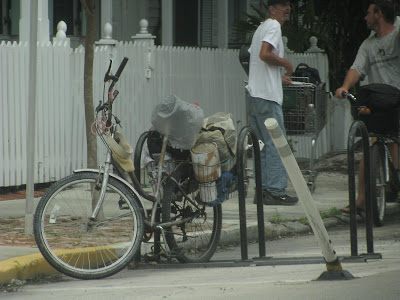 Not riding side by side. These must be well mannered visitors. 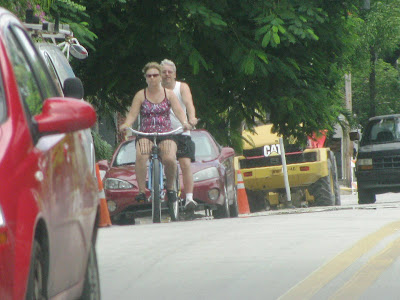 Hotels and guest houses frequently have bikes for guests to use. The size of the collection at Eden House on Fleming Street always boggles my mind. 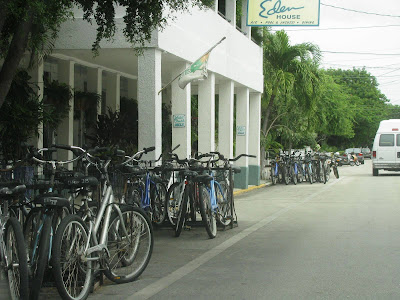 This deocratif motif left by a former resident: 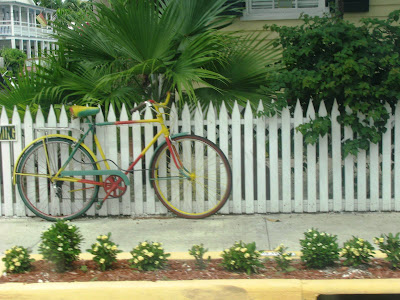 I watched this woman cycling in front of my car southbound on White Street, here seen imperturbable as two other laden cyclists pull out abruptly from Olivia Street in front of her. 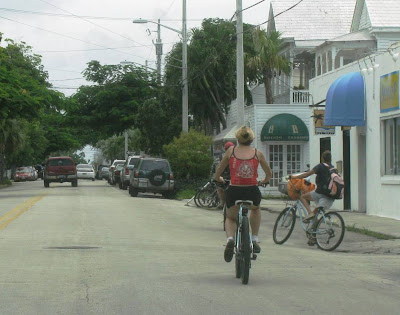 She stops appropriately at White Street at the red light. 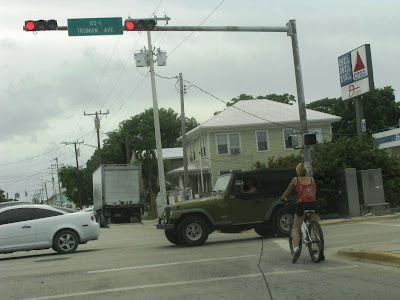 Traffic eases and off she goes risking a ticket if police were around to see her. 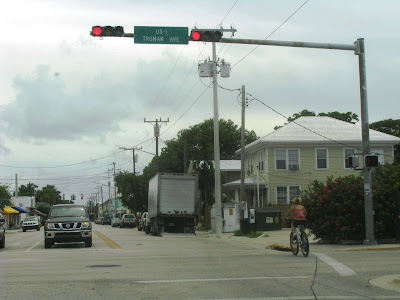 I'll bet she'd have been pissed if she got a ticket for that stunt. Tourists here on Truman checking their directions. Riding on sidewalks is permitted in Florida as long as you a) yield to pedestrians and b) have an audible means of approach (not specified). 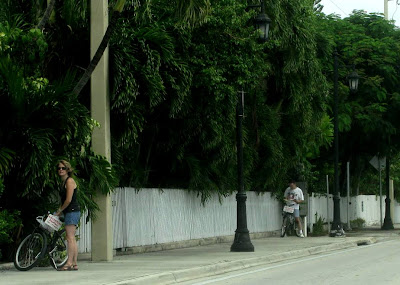 For $9 a day one of these beauties could be yours to cruise around town. 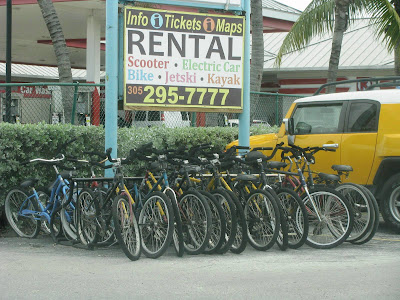 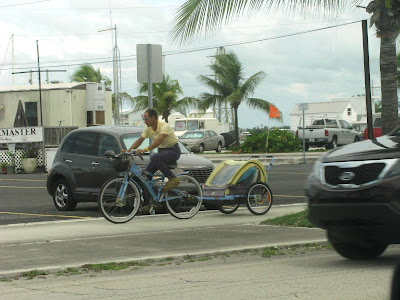 Unhappily my forward motion in the car messed up the focus but you get the idea. Helmets (rare in Key West) and swimsuits. Whatever works. 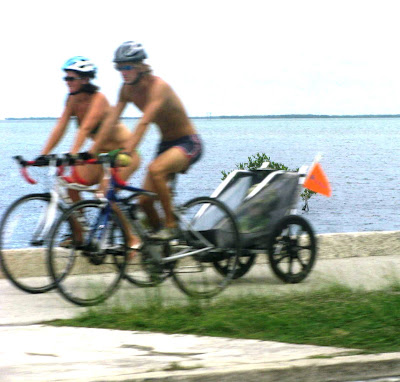 Me? I wouldn't mind a Genuine Buddy from the Yamaha shop to get around town. I find a bicycle less useful than a scooter for fast movement across town. 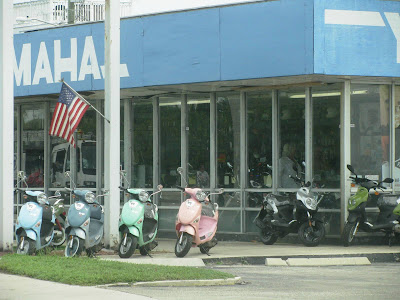 Seen on College Road, quite a likely a student pedaling to the...College with the typical backpack. 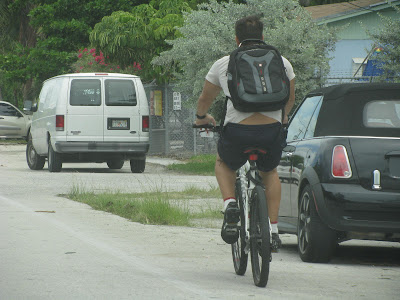 The Florida Keys Community College on Stock Island my be five miles from Duval Street but considering how flat the terrain Key West and Stock Island are ideal cycling territory.