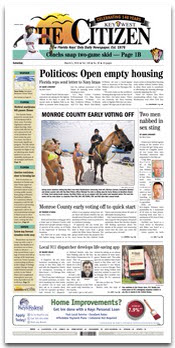 The Key West Citizen put my life saving 911 app on the front page of the paper. Mandy Miles wrote a bang up story about it and when she was interviewed on US One radio and did a terrific job of covering all points with the radio. LINK it was on the Friday evening new magazine March 4th with Ezra Marcus. Bloody nice.

And let's not forget you lot helping out and putting us on the iTunes Store map as it were. Onwards and upwards and many thanks to all involved. I am overwhelmed by the response.

Posted with Blogsy
Posted by Conchscooter at 3:17 PM 3 comments:

You could come to Key West and enjoy winter the way it's meant to be lived. Fred Flinstone drove down and has taken up residence in Bahama Village: 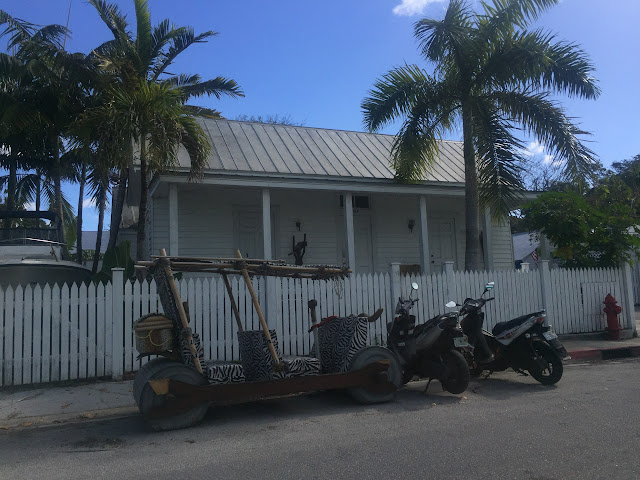 Red Head and Blue Shoes photographing chickens like a tourist. Does Key West still attract visitors who dress like this? Apparently... 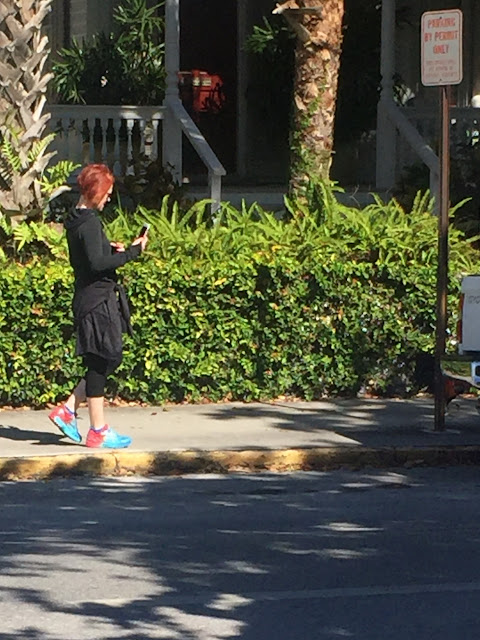 Rusty took his first urban walk and found it quite stressful. He saw people and dogs and loud vehicles but I am pleased to say when he got nervous he came to me instead of pulling away. We are making progress. He was actually quite funny as he would dive suddenly for a flowerbed and take a profound interest in a leaf and I'd look around and I realized he was trying to avoid crossing paths with some fearsome person or dog up ahead. Smart boy. 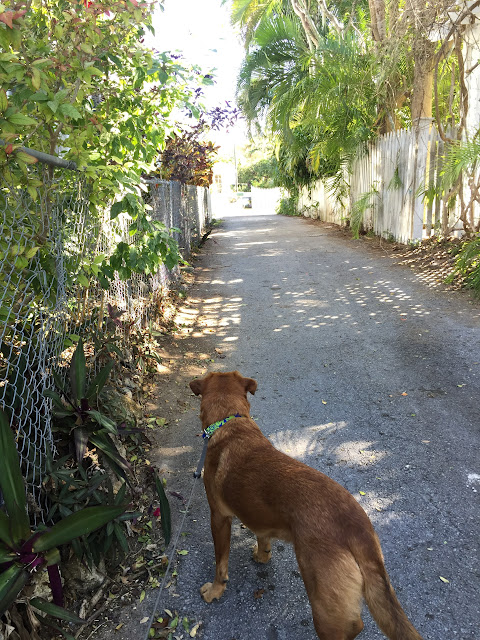 Winter in Key West can be delightful with clear blue skies and bright colors. I am no fan of snow or fog or grayness. 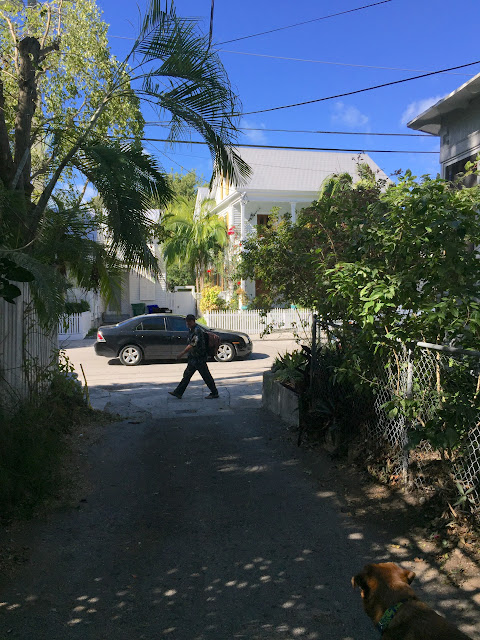 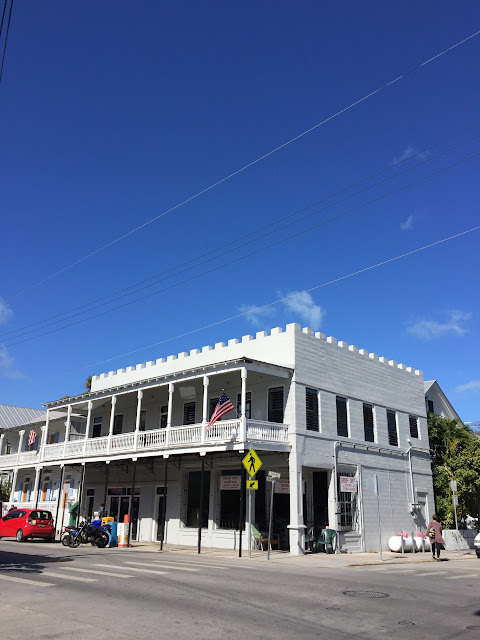 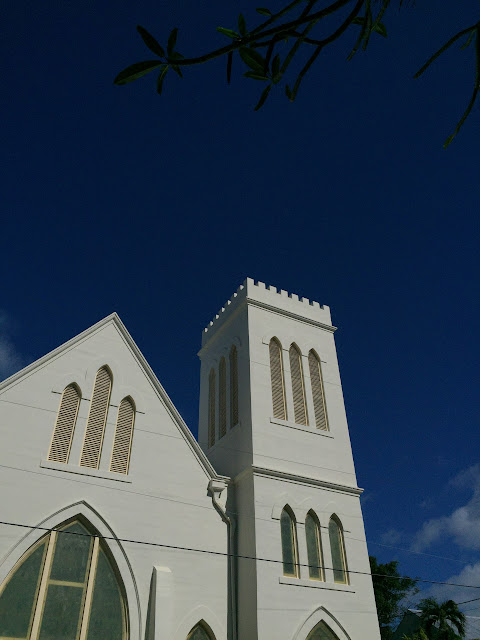 WE tromped around for half an hour, Rusty frightened by the traffic on Eaton Street, me enjoying the day. So as a compromise we circled Southard and Fleming and took a detour up Love Lane before facing off with the bums in front of the library who were no trouble at all except in Rusty's mind. I live a charmed life as the residentially challenged in this town never bother me. 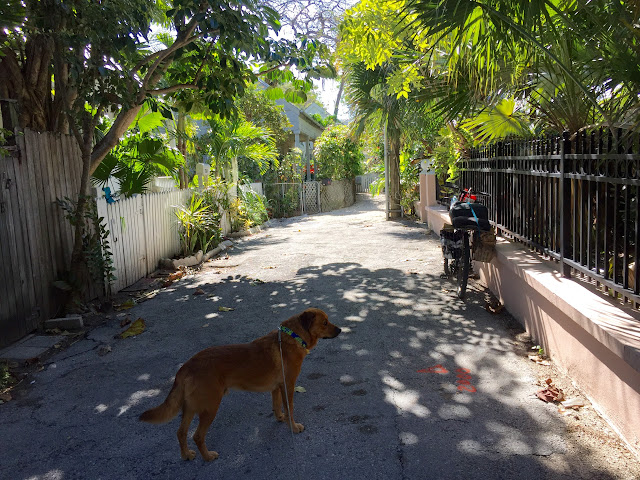 One small dog exhausted. Worn out I suspect more by the tension of his fearfulness than the actual physical exercise itself. I'll bet he never expected such a varied hectic paced life. I hope the couch is compensation enough. 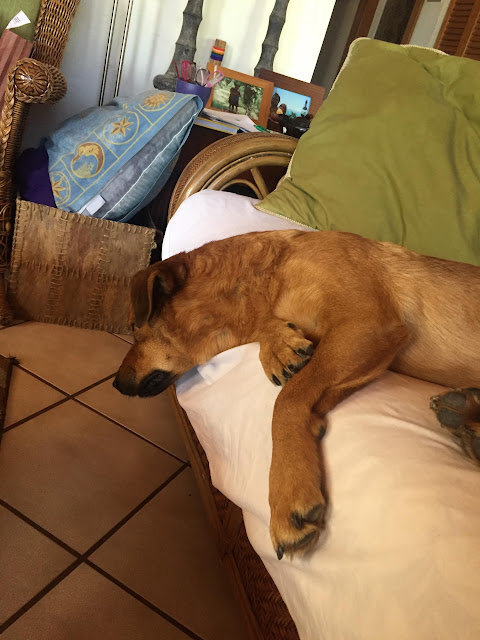