Vespa In The Everglades

I set my alarm for 3:59 Friday morning and I was rolling down the street at 4:15. It was still dark at my first gas stop in Key Largo 80 miles and 1.6  gallons later. That's the Vespa's range on the main tank at 50-60 miles per hour which was why i had a spare gallon of gas on the front rack for mainland touring. 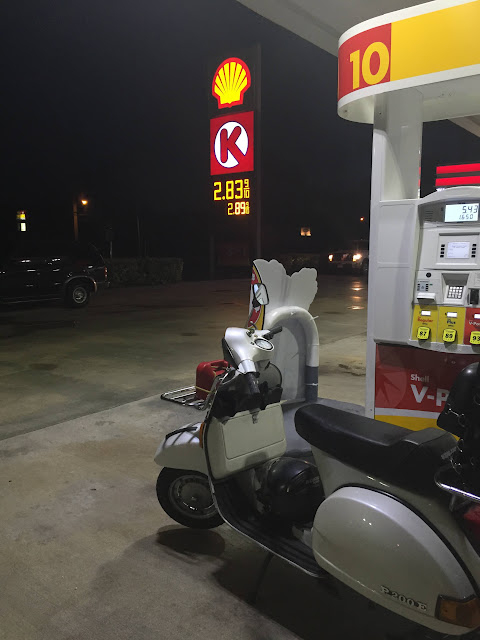 I was on the 18 Mile Stretch by the time the sun was coming up and it looked to be a beautiful day. There were winds out of the east, the sky was clear and I had remembered to apply sunscreen before I left home. I stopped for pictures and to make a minor clutch adjustment and there were no insects biting me which was a reminder that rainy season has yet to kick in. 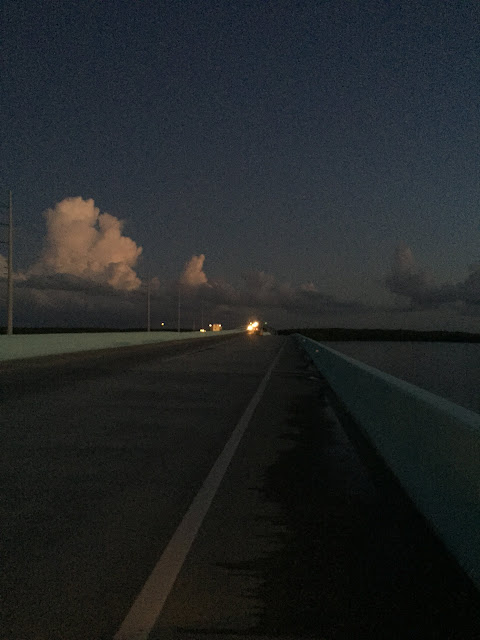 I like the turquoise barricades placed on the stretch at the request of a local resident apparently who told the state engineers it would look suave. Some people will grumble about anything  but I think the color really does show off the bright colors down here especially in the waters around the Keys. 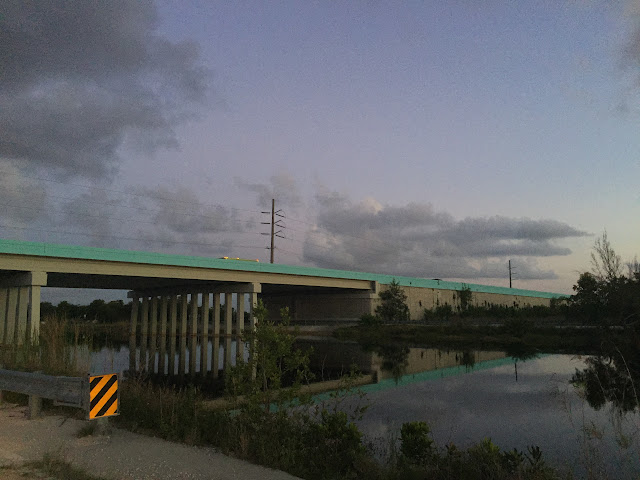 The Stretch was quite empty and I had an easy time going North, which was to be my undoing coming south in the afternoon. 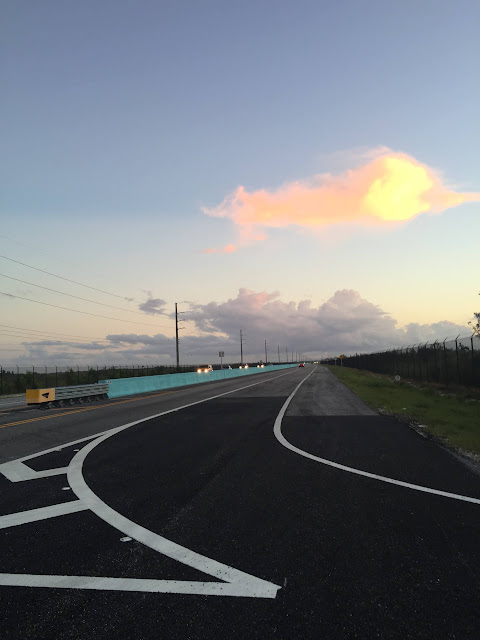 Homestead was empty before seven o'clock. I was staring to think about breakfast and figured I might find an interesting food truck along Krome Avenue. Homestead is a farming town largely populated by Mexican field workers who bring their own culinary traditions to the town. I like real Mexican food and I was ready to find some. 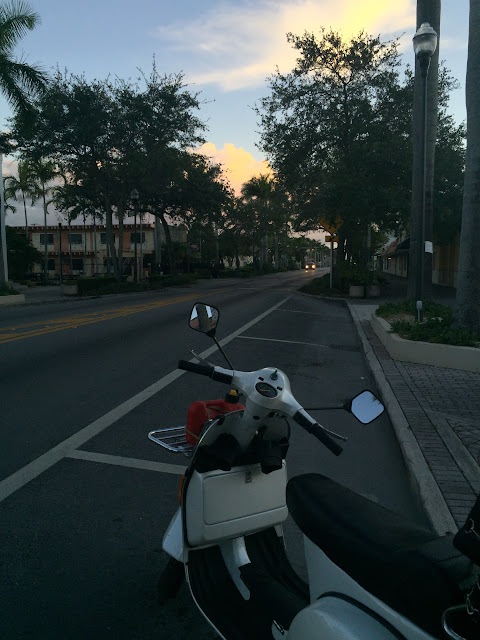 In the event the only place open for breakfast that I found before I expired was this guy with a traditional American food truck for field workers. I surprised him but I surprised him even more by speaking Spanish to him. We got into talking and he told me he'd had a stroke which explained his reticence at first but he started asking about the Vespa and even though he had a  bit of a facial tick I could understand him just fine. He sold me a delicious slightly spiced fried chicken sandwich - not the taco/burrito I had been looking for but so what? Then he told me about his rides on his 250cc motorcycle when he was living in Cuba. I wondered to myself if it was Jawa or an MZ, typical Iron Curtain products of the era. 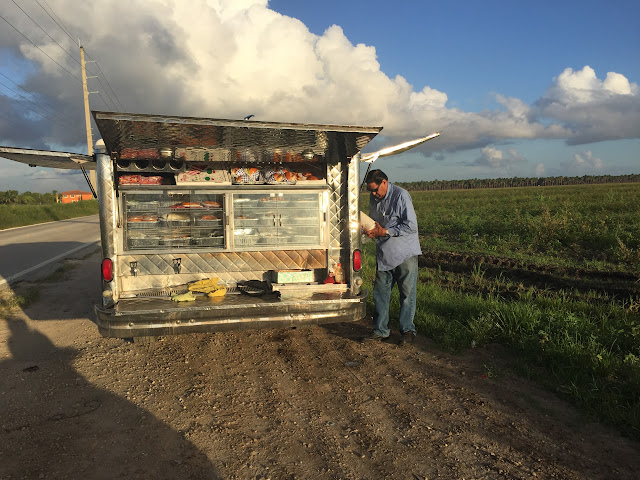 It was very pleasant standing there in the early morning breeze surrounded by some of the most productive farmland anywhere chewing on spicy crispy chicken and drinking a Coca Lite as they are known in the Spanish speaking world. I could have been in old Mexico as I looked around. I sure wasn't in the Keys anymore. 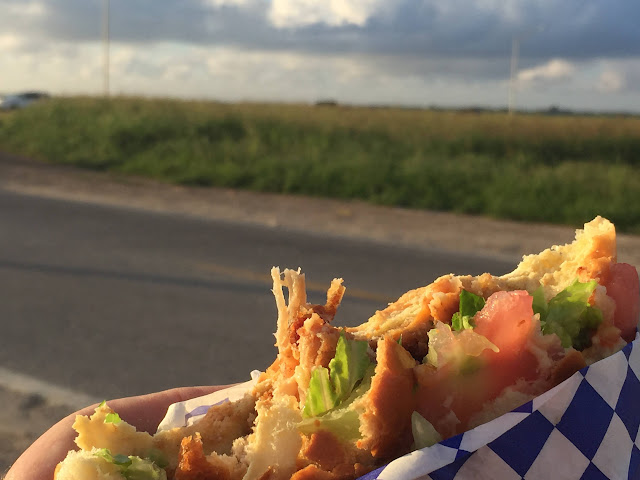 Krome Avenue is a giant pain in the butt. I always want it to be a fun ride through palm plantations, fruit stands and decorative garden gnome country. Instead it ends up being a slow ride to nowhere, 35 miles per hour if you're lucky stuck behind trucks and farm implements and field workers in dusty cars driving like their grannies. The road is apparently a road that has been noticed as a problem as they are now constructing a whole new freeway alongside. Perhaps that will make it a useful if soulless alternative to the turnpike. 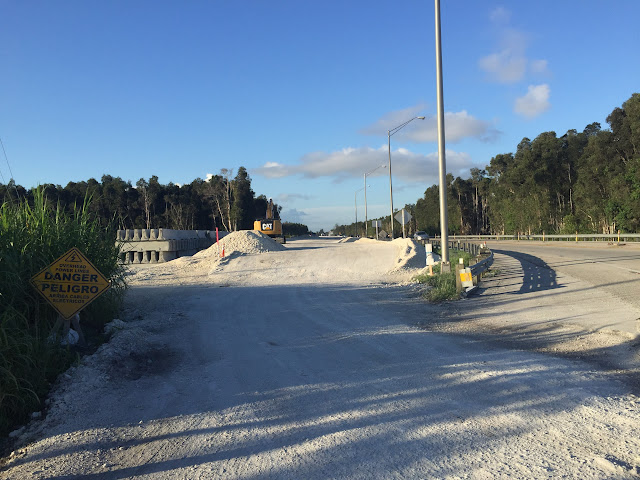 Just to make things even better while we wait for road improvements they have turned this nightmare into a no passing zone for its entire length, maybe 20 miles. On the Vespa I was okay as 55 was as fast as I needed to go. Had I been on the Bonneville...I used to enjoy passing here when the road was wide open and I could zip by on my motorcycle. This officially sucks as cars behave badly when they are penned in behind a slow truck. I watched them weave and duck and we were going so slowly I took this photograph while moving: 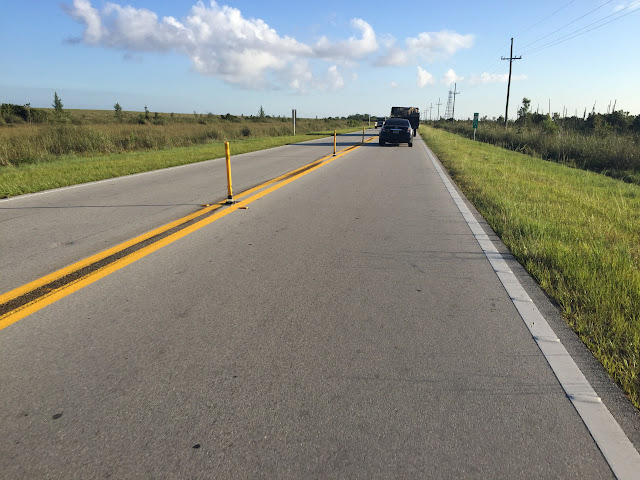 Krome Avenue at last joins Highway 27 which is a four lane expressway across the center of the state, far from the freeways on either coast. I like it when I am driving north as it's a great way to see the bits of Florida the tourist herds have no interest in visiting. During orange season there are tons of stands selling the best fresh juice and the small towns are much quieter than the interconnected communities lining the beaches on either coast. You even get a few mildly rolling hills north of Lake Okeechobee. 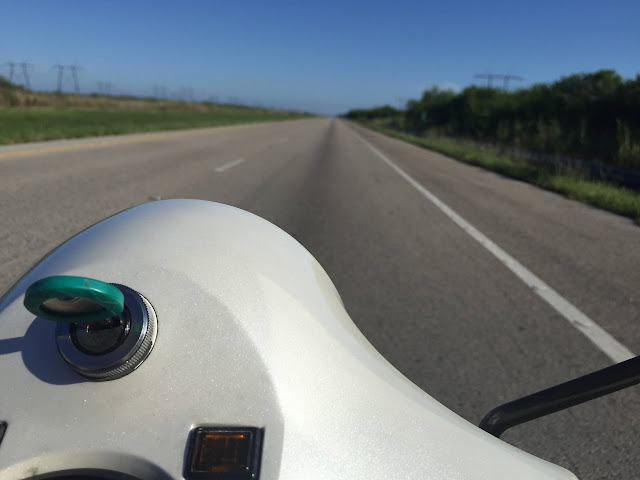 The Everglades are not often understood to be that which they have been described as being, which is a River of Grass. Trundling along at 53 mph the scenery could be described as tedious but a long straight road with an extra lane to allow passing and not much to do allows plenty of time for the inner rider to think. So I did. 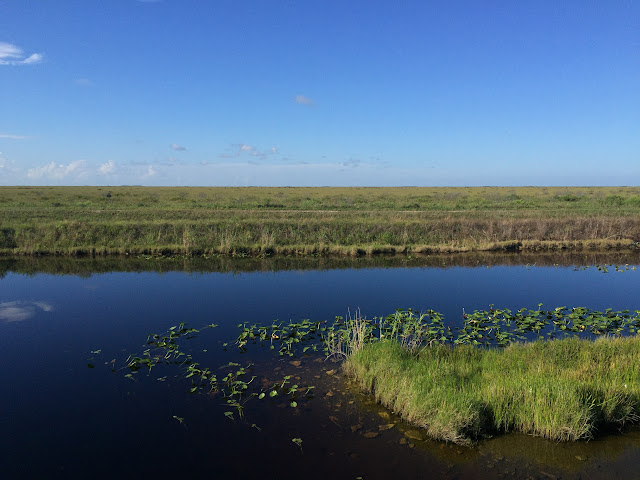 I knew exactly where I wanted to turn off to penetrate this featureless landscape so I didn't have to check my phone or the excellent Google Maps app. I never lost my AT&T  signal throughout the trip which is a remarkable improvement over the bad old days when areas like this were out of signal range. 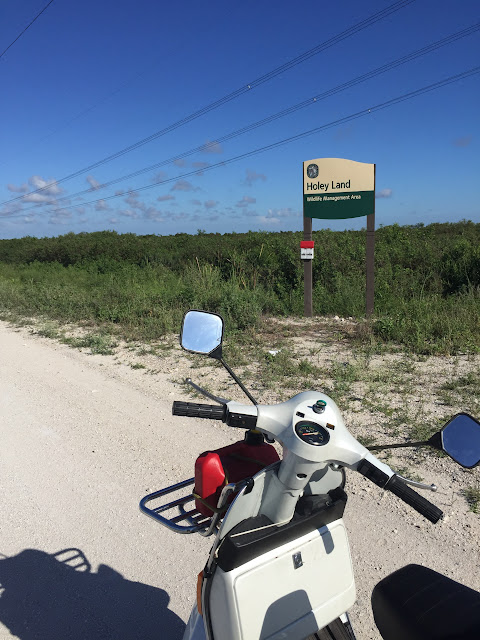 Holey Land is a well known recreational area for off road vehicles in South Florida, and the start of the dirt road is apparently 63 miles north of Homestead. 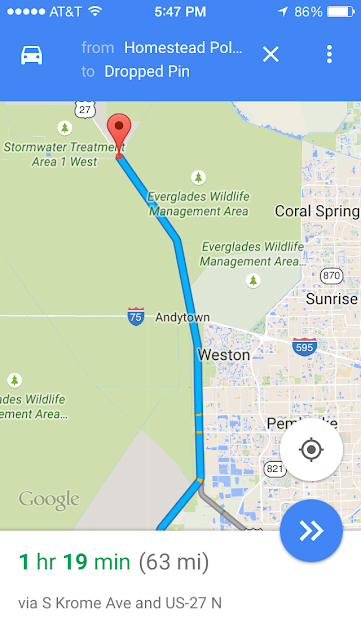 I started off at a cautious 25 miles per hour in 3rd gear keeping a close eye on the road in front. There were some pot holes marked with a slight shadow around the rim and falling into them led to some severe jolting so I got better at avoiding them, but fortunately most of the surface was hard packed gravel with just a little loose stuff and easy enough to ride. I had to stick to the middle later  as there was quite a bit of washboard which caused the scooter to shake hard enough to loosen my fillings. 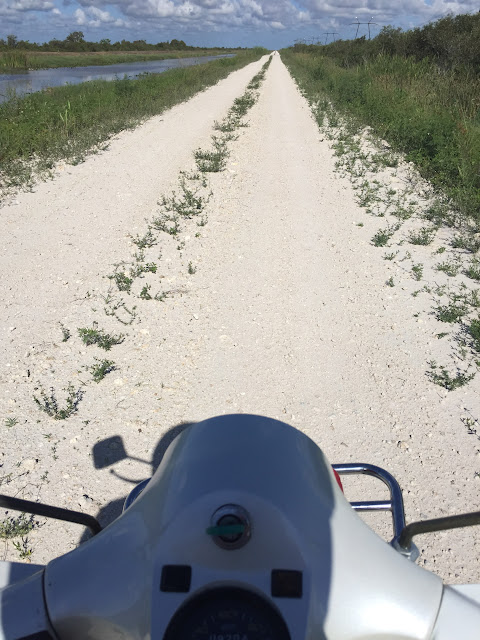 Honestly it was just tedious going half the speed one might have traveled were the road paved and having to keep an eagle eye out for every little imperfection was tiring. I eventually arrived half way to Snake Road where I longed to be, and the half way point was visible from a long way away as a gray block on the horizon apparently never getting closer until suddenly one found a pumping station astride the road. 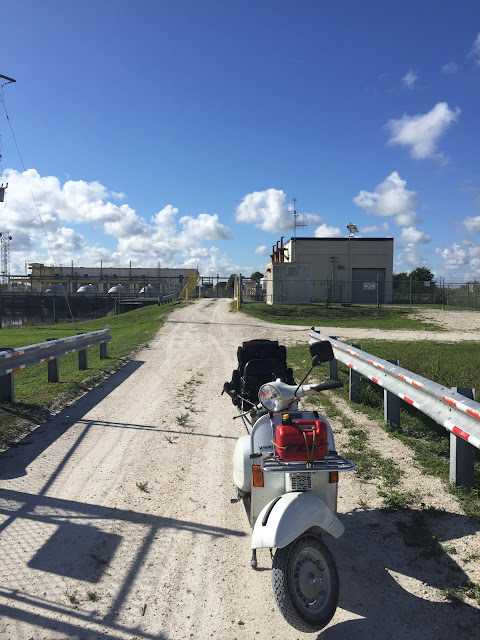 South Florida became the object of much engineering attention in an era when changing the landscape was considered  a Good Thing. That was when the natural water filter that is the Everglades was directed into canals and the natural watery habitat was wrecked for millions of acres. 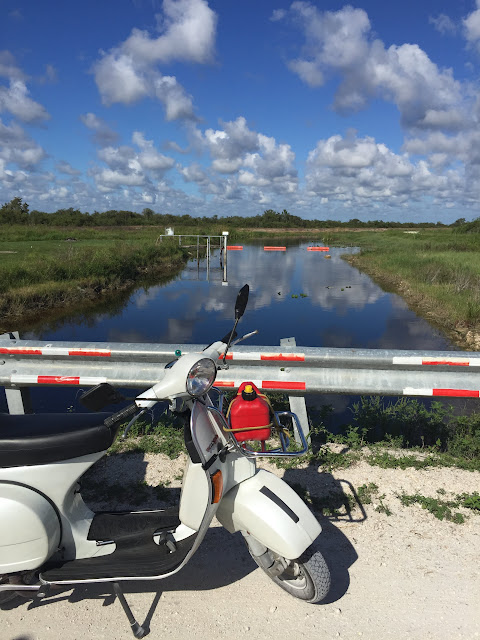 Plans to restore the habitat, voted by Florida residents by a huge majority have been stymied and waylaid by the Republican Governor, his Cabinet and the part time state legislature. 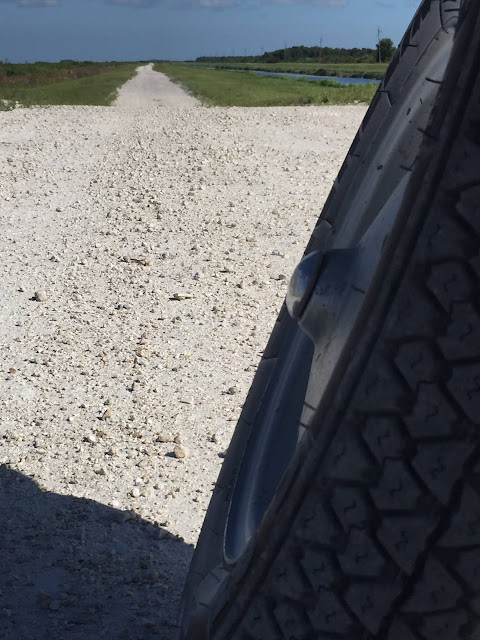 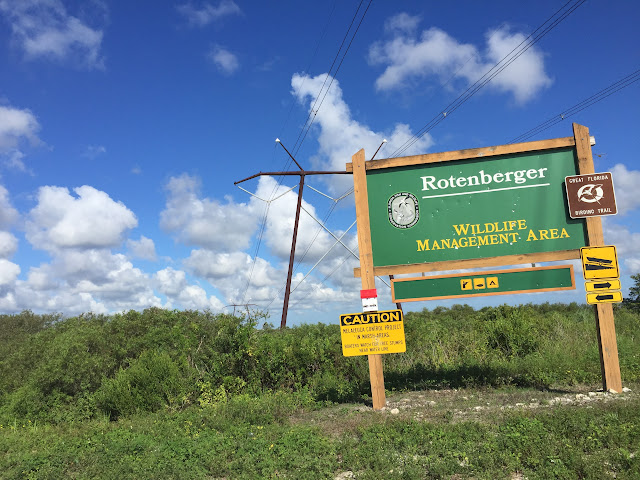 If you want wide open country this is where you come. I saw no one anywhere here on my west bound trip across around 9 am on Friday. Not a vehicle, not a person, no sounds at all when I switched off the engine. 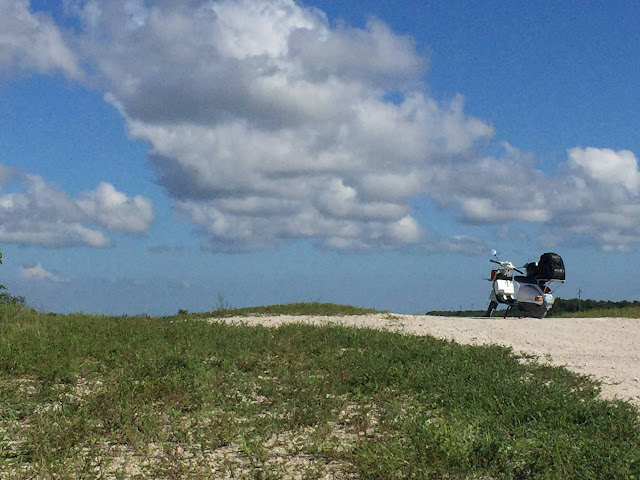 This is Huff Bridge Road which connects to Snake Road about 15 minutes away to the West. 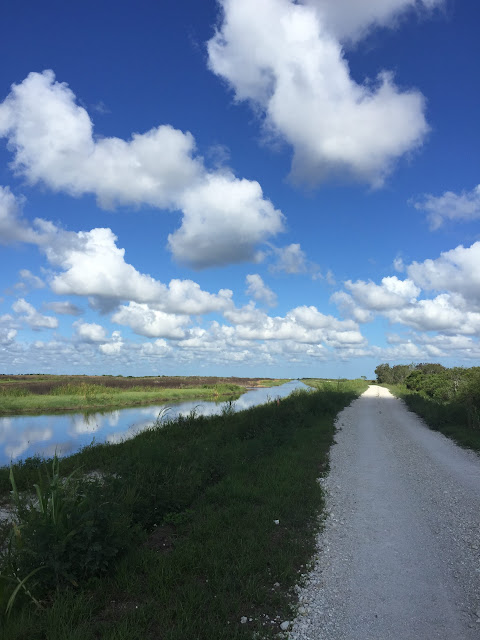 Me, the only human in sight. 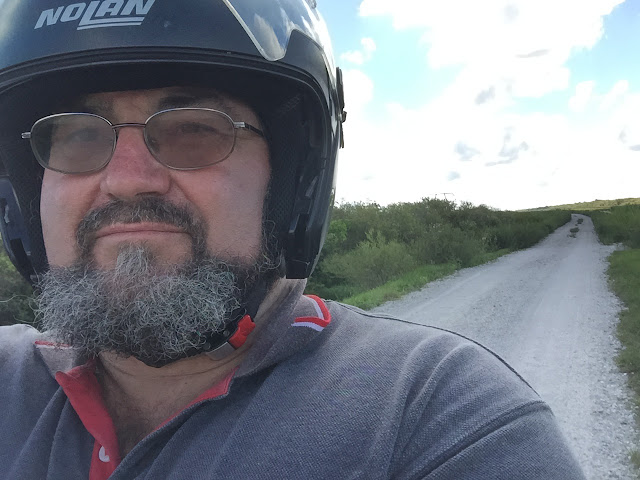 With no fanfare Huff Bridge Road joins paved Snake Road  after several typical long straight stretches of gravel followed by sharp 90 degree turns following the canals. This section was smooth enough I got up to 4th gear and 35 miles per hour. 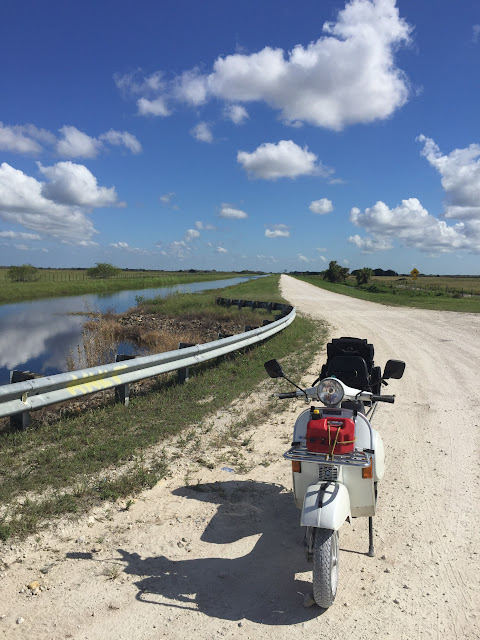 The Seminole Village in the Big Cypress reservation is four miles up Snake Road from where I joined the pavement. I found shade at the pumps, where I hoped to find gas as they can be flaky sometimes. All was well and I bought a big bottle of ice cold water for my next adventure. 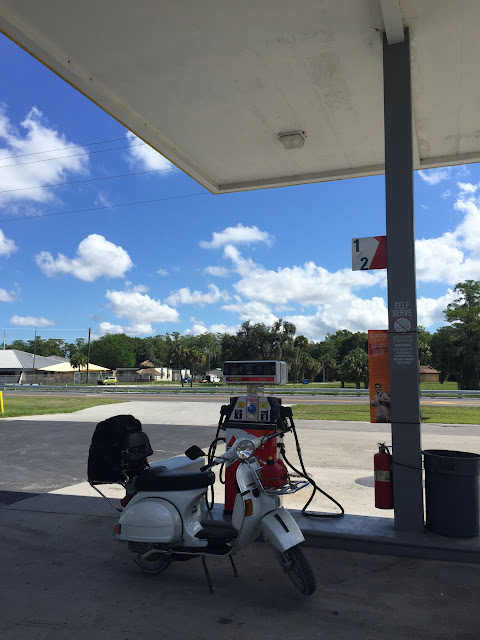 The Seminole Village is actually a neat tidy place with all facilities including the cemetery, driving range and rodeo all run by the tribe.  The museum is well worth a visit. They have a campground with a couple of cabins I believe but there is no motel here for outsiders. 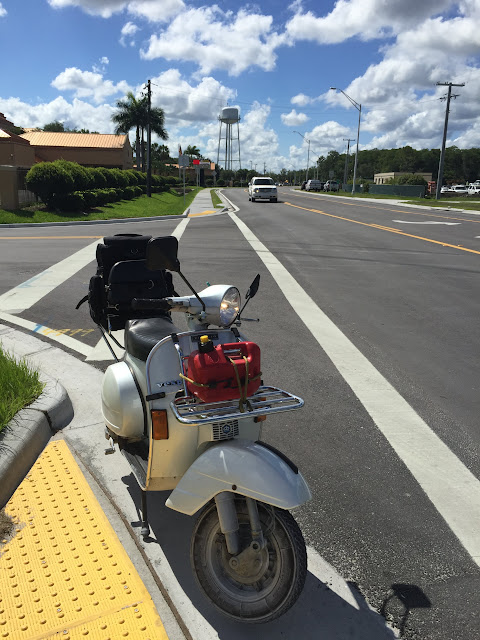 My plan was to follow the pavement on the other side of the village and take the West Boundary Road across the Everglades to come out at Highway 29, then turn south and ride Tamiami Trail (Highway 41) back to Krome Avenue. It was a good plan. 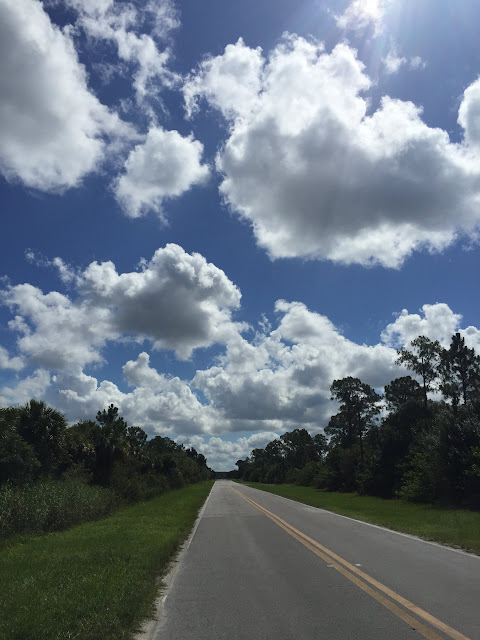 There is pavement out of the village to the big swamp tours place which is busy in winter when temperatures aren't so high. I found it quite pleasant on the road, slightly over 90 but with a fresh cooling breeze and no mosquitoes whatsoever. It was a good time to be out in the wilderness. 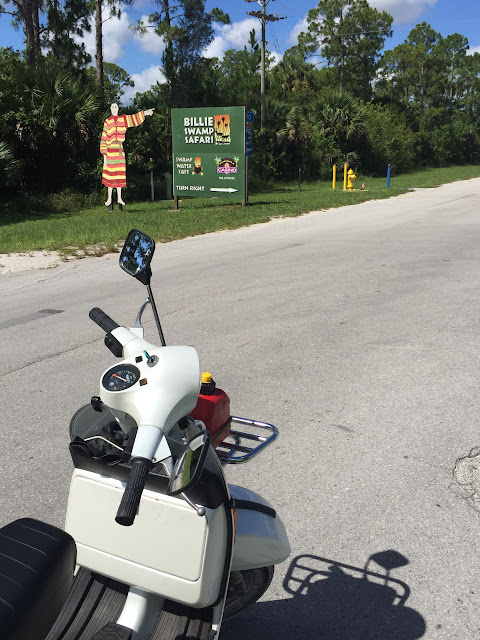