I love history. The past shows the future and the knowledge that the past occurred before I was born reassures me that history will be made long after I cease to exist so I know I have my place in the continuum. To tread where the modern era of flight began is a privilege and the more I learned about the Wright brothers the more astonished I became. They were geniuses. And I am embarrassed it took a trip to Kitty Hawk to teach me how little I knew. I have walked down the first flight path and I am better or it. 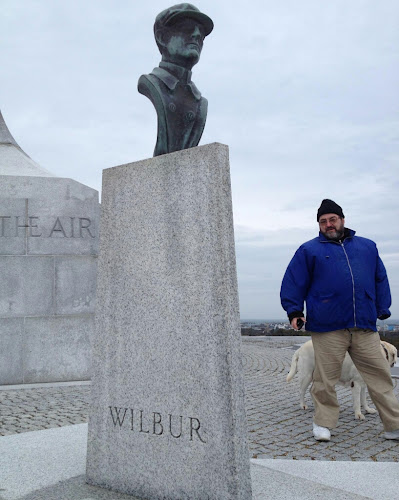 The fact is it was freezing cold, as predicted when we drove to the Outer Banks from our second stop at Rocky Mount, North Carolina. Of that town we saw only the crappy shopping malls astride Highway 64, and walking Cheyenne through them brought down the icy drizzle in 45 degrees, as cold as it gets in Key West. Ever. My Labrador perked up; she likes the cold! We were less enthused, my wife and I. We drove the seventy odd miles to Manteo, (pronounced weirdly enough as man-ee-o) which is a small town on a large wooded island between the mainland and the Outer Banks. The road was boring as hell, four lanes then two through pine forests, an hour's drive through an absolute wilderness punctuated by a couple of small towns equipped with gas stations and feed stores. Then we reached the Croatan Bridge, which seemed as long and as scenic as the Seven Mile Bridge. Except the scenery was shrouded in moisture. 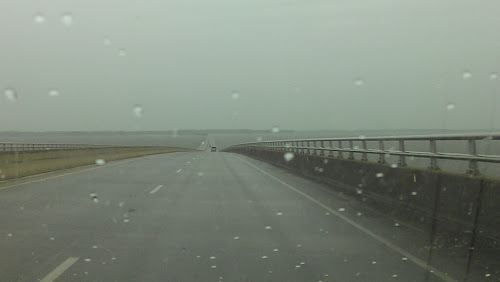 We drove through Manteo, taking notes in case the rain let up the next day and we could return and heck out the Elizabethan recreation of the original colony on Roanoke Island (pets welcome when leashed! Excellent). History of Manteo, Wanchese and Roanoke Island: On The Outer Banks Of North Carolina - History, Events, Attractions - Dare County, NC. Croatan, Roanoke, Pamlico and Albemarle Sounds They call this place Dare County after Virginia Dare the first English child born in the Americas. Nag's Head on the Outer Banks lays claim to shopping, not history and it's a horrible place. Urban planning was lost along the way and the four lane highway is a collection of traffic lights, strip malls and chain stores. Useful perhaps, but not nice. 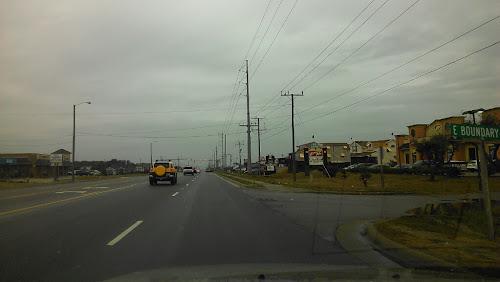 My wife the navigator rooted out a small café in her phone so we looked for Lachine, and had superb soups, apple rutabaga which was sweet and yellow, and crab bisque which was also divine. The owner, Mrs Lachine, told us she has lived here for five years with her husband and two children and in that time has never visited our destination: Ocracoke Island. She's heard it's nice though. I am an explorer and I shall take nobody's word but my own. 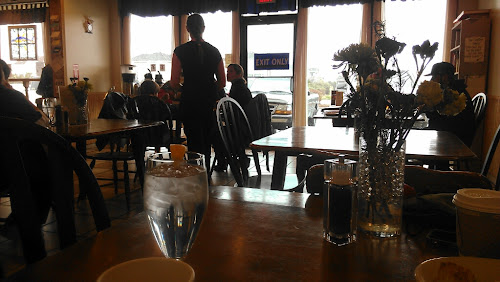 The rain eased a bit after we left lunch and we drove north to the Wright memorial. It was fantastic. December 17th 1903 the Wright brothers made four flights here witnessed by a few life guards who were stationed here to keep an eye on the five thousand local fishermen and any passing mariners in trouble. They saw powered flight for the first time here. 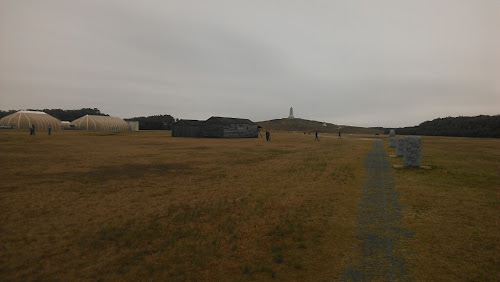 What I learned is that the Wright Brothers, cycle mechanics and acknowledged capable racers from Dayton Ohio planned and executed a well reasoned and researched campaign to learn how to fly over a period of four years. After those first successful powered flights they decided to let the world know. Then they carefully patented their inventions and made a fortune. "Inform Press." 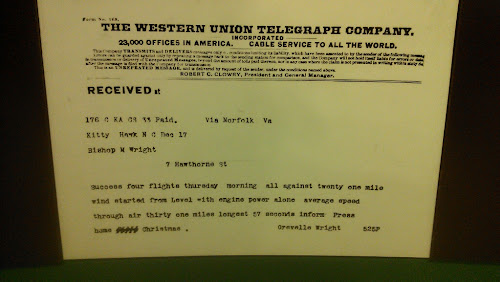 They built a hangar and a shed to live in in a sandy plain next to a sandy hill. They first used the hill in 1900 to learn how to glide, a difficult and slow learning process in a world filled with theories of flight and no facts. Their gliders, masterpieces of elegant simplicity (eventually!) have been overshadowed by their powered Flyer of 1903, but they launched themselves from the hill perhaps a thousand times until they knew their 1902 model worked and could be controlled... 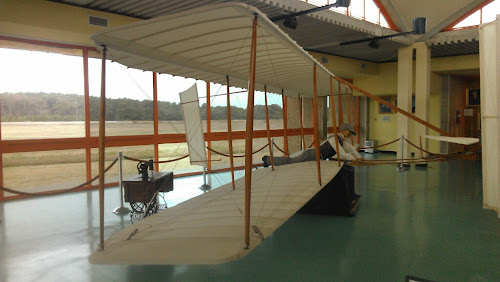 It turns out they were competing with a man who believed he could launch a plane called an 'aerodrome' off a houseboat moored in the Potomac River. He had received money from the military and all eyes were on him as failed to fly in front of God and everybody. Hence the secrecy preferred by the Wright brothers in their remote sandpit. 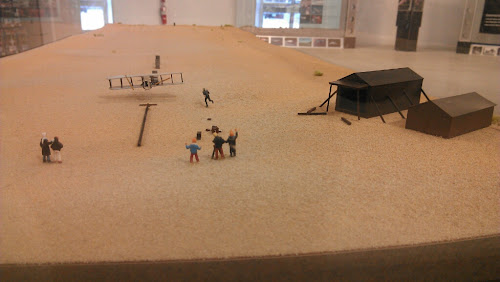 Where they flew for the first time photographed by a freaked out mechanic who couldn't even remember if he had successfully opened the camera shutter. He had. And because he did we have the picture and all the efforts to commemorate and reproduce that amazing moment in that very plain place. 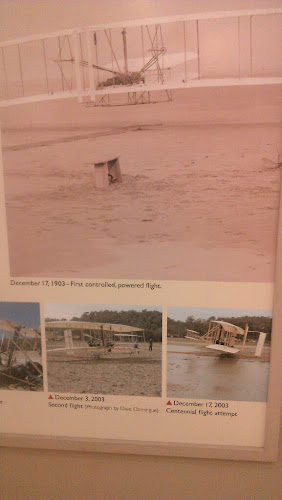 The rain quit but the wind remained and it was cold but I challenged my wife to hike all the way across what had been a sandy wilderness In the Wright brothers' time. Modern solar panels power the most excellent exhibits inside the permanent tents. 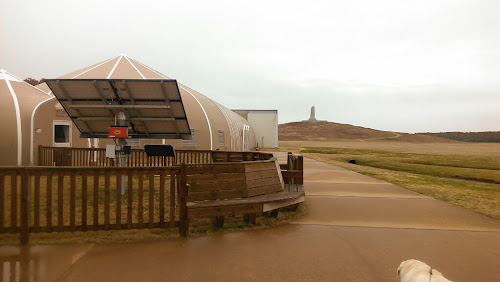 The big marble monument built between 1928 and 1932 looks like all the classic Greco-Fascist statuary of the era. I've seen it all over Rome. It was like standing on the edge of the earth, with the wind plucking at us, as though to induce us into free fall flight. 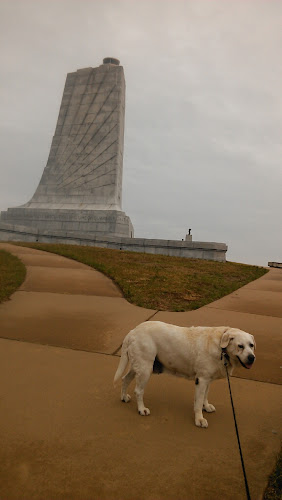 We were alone up there, floating on the icy wind. 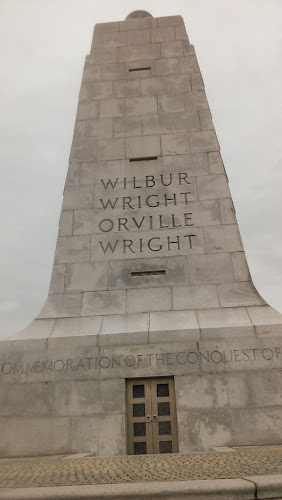 What lies behind the doors I asked myself. I believed the promise that the doors were locked and I failed to twist he handle to see what might happen... 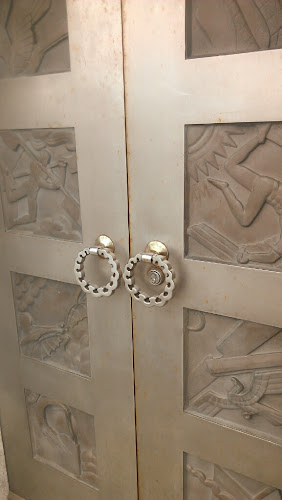 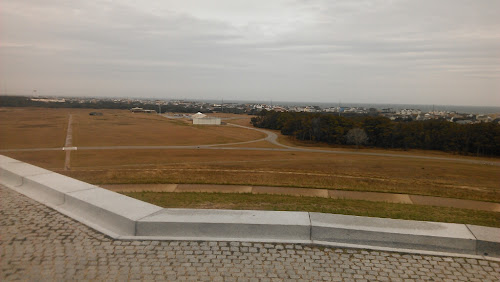 And there was a helipad nearby. I wanted to shout out to the shades of the pioneers: "Hey guys! Check out how easy it is!" 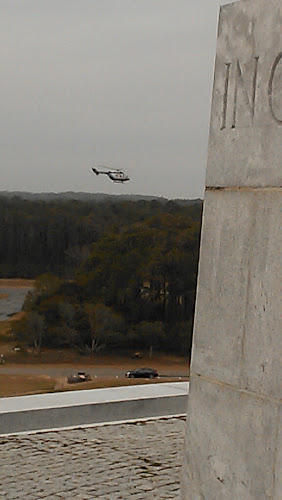 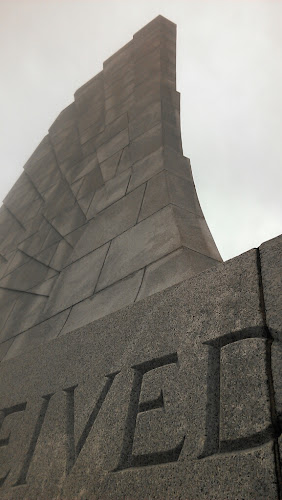 Wilbur, moustache-free unlike his brother, flew second, but over four flights he flew furthest and got the greatest control over the bucking bronco Flyer. He got the longest flight of the day accurately measured at 57 seconds and 850 feet. 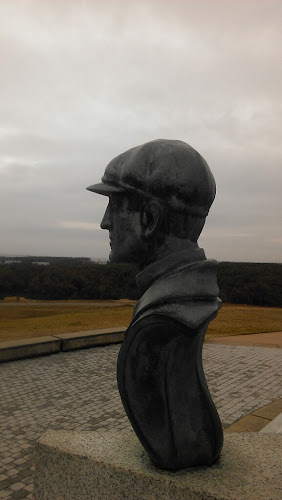 Where they flew. The rail on the left marks their take off system in the soft sand that would have bogged down wheels: 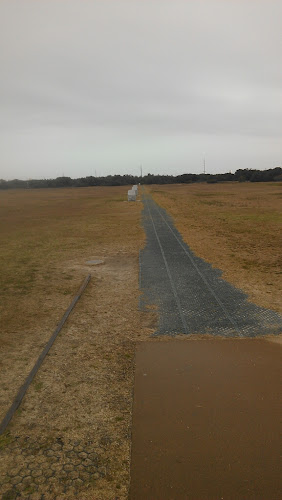 I was free to walk the flight path so Cheyenne and I did just that. It was just there in the grass rubber mat covering the original sand with a fake pathway to make it easier to walk over the spiky cactus grasses in this area. Cheyenne did not like them at all. I was walking on air, this was where it happened... I was born into the era of space, a few months after the Sputnik circled the earth. That was just 55 years ago. So much has happened in so little time. 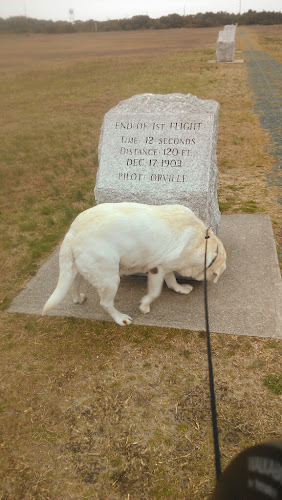 It was all accurately recorded by the brothers. They knew they were making history. 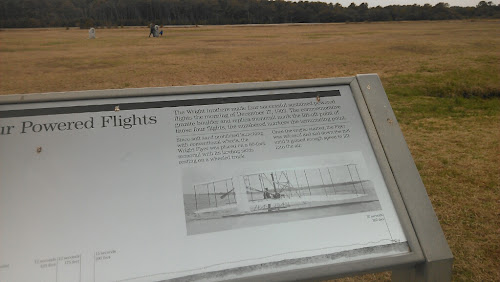 They seemed to love breaking the code of flight: 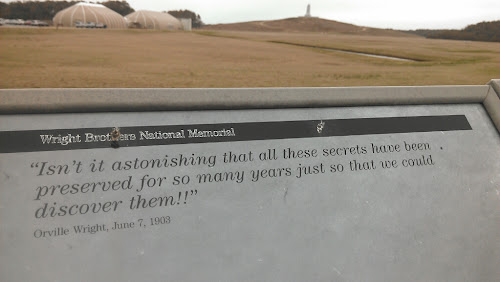 There was a family flying a Flyer kite. "Hey, " I called out, "You're too late. They've already done that. A hundred years ago." It looked lovely and evocative. 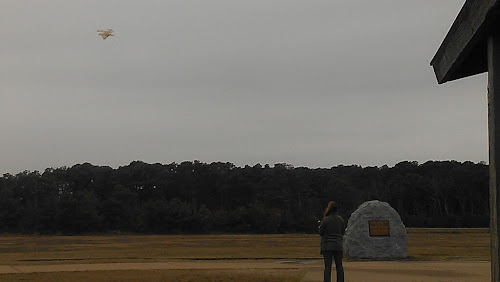 We ended a fun afternoon by listening to a thirty year veteran ranger explain how the brothers figured out how to fly. The principles they learned patented and expounded are still used today on any and all flying machines. 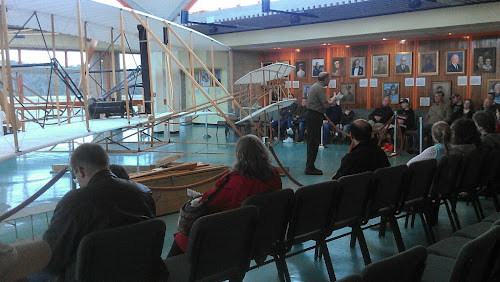 No pets allowed inside. 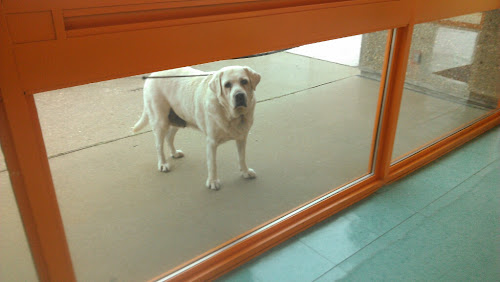 Taking off, turning and roll control. All learned from scratch by the bicycle mechanics from Dayton. America didn't care for their discoveries so they went to Europe and created the world's first production aircraft with Britain's Short brothers in 1909. 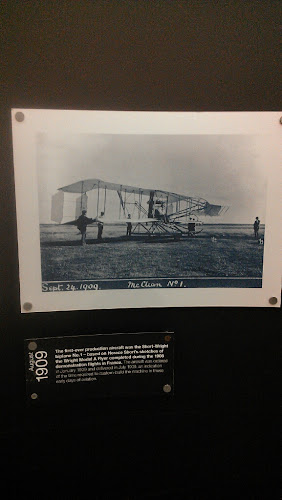 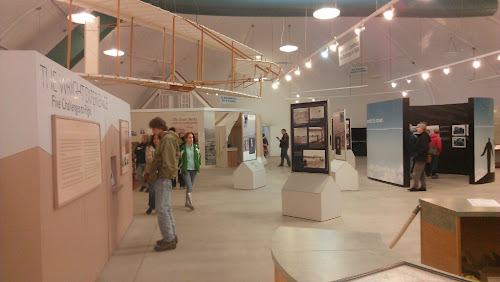 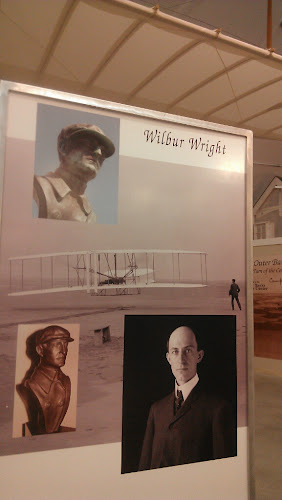 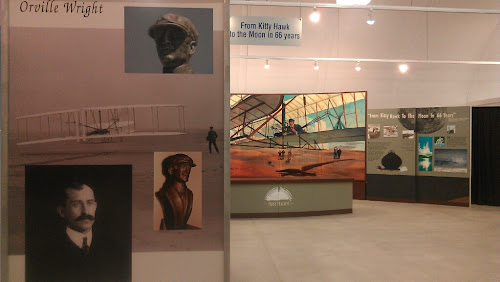 I loved this place. Put on for us courtesy of the US government. Your tax dollars at work, and we got in for eight bucks. 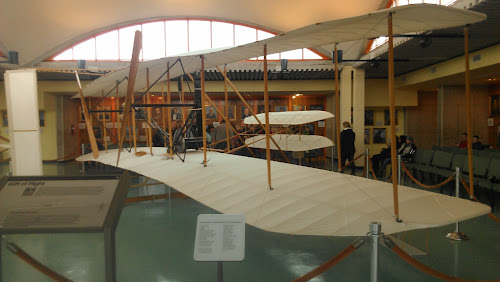 I loved this place. Now I need to get to the Smithsonian to see the actual plane. And I'll know how it works. What a great day. As wintry as it was. 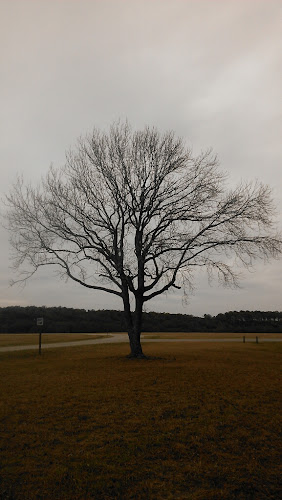 Did I mention I loved this place?