Gone But Not Forgotten

I was just thinking about things that aren't here anymore and some days I wish they were. Fast Buck's the preposterous department store where I worked for a brief while, that's long gone, a victim of internet commerce they say.  Goods were pricey, store display was astonishing and the store gave Duval Street a certain flair. A modern pharmacy in the same place is not at all the same thing. In 2007 Atlantic Shores was gone. I liked it because you could tell visitors it was "straight friendly" and in those days that was rather scandalous. Atlantic Shores was a full service independent motel with a diner attached and a liquor store as well so one had no need to leave the motel. They had pool parties at the clothing optional pool though they weren't for me. I attended the outdoor movie screenings on Thursday nights with my Labrador Emma on my lap. 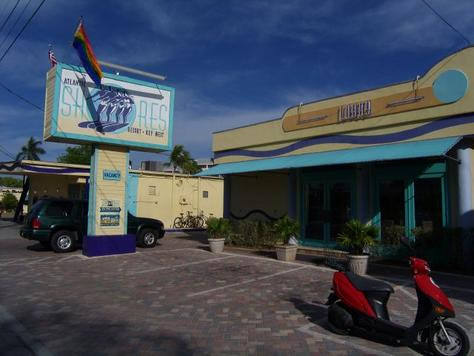 I don't hate the waterfront brewery in the same way I dislike the building that replaces Atlantic Shores, but I miss the grocery store which had it's own organic vibe and juice bar and internet cafe. The brewery is okay if you like vast barn-like spaces, the food is okay but for some reason I don't feel compelled to go back there. It's not a warm inviting atmosphere as I prefer my drinking space to be. But then again I don't drink much. I miss tying up at the dinghy dock and ordering a  sandwich and getting online. That's all. I looked forward to Thursdays and the weekly rag appearing. Solares Hill made Key West feel connected to the past. Nowadays the Blue Paper survives as an internet page but back then a weekly paper was a requirement for a town to have independent journalism and Solares Hill provided it. When it got bought out by the Citizen it became a Sunday supplement and I lost interest. There was a time when the Old State Highway 939A on Sugarloaf was open to vehicles. That allowed the less energetic to get access to a particular fishing hole. That privilege has ended and though I walk Rusty down here frequently I have to say there were never that many cars on the road, and it was fun piloting the Bonneville in the dirt. Oh well. The 2004 and 2005 hurricane seasons were brutal. They drove a lot of people out of the Keys, and those that stuck out the flooding and disaster relief built some kind of a bond. I can't say I miss those awful endless stormy summers. Another decade of peace and quiet would be nice.