It was a quick visit to the Dalí Museum in St Petersburg, a stop on the way home. Rusty spent three hours with a sitter, (rover.com) and I am trying to learn not to leave him behind with a lump in my throat. This time he got away and came haring after the car as we drove away which made it harder but I got through those three hours and so did he. I fear I enjoyed myself even more than he did walking with a lovely young university student and taking treats from her. 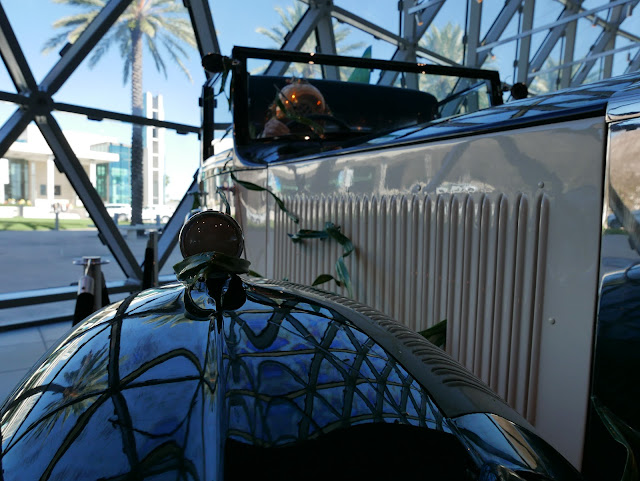 We are member of the Dalí so we get to skip the lines at the entrance which is nice but our cards were messed up so leaving my wife to deal with the bureaucracy (it was her fault, she threw away the valid replacements and kept the outdated cards it turned out...) I tried once again to capture the essential Dalí surrealism in the wet Rolls Royce parked in the gift shop. They call it the Rainy Taxi frequently reproduced with a Cadillac and the driver with a shark's head. Not here: 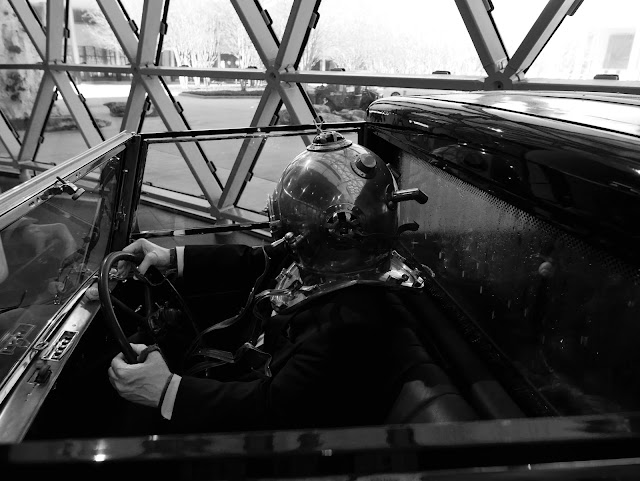 Water streaming down inside the windows makes  a photograph as I like it, crisp and clear, impossible so I allowed myself some latitude and contented myself with the Countess' hand appearing through the mist. The other name for this piece is Mannequin Rotting In A Taxi Cab but I couldn't figure out how to spot snails crawling on her body.... 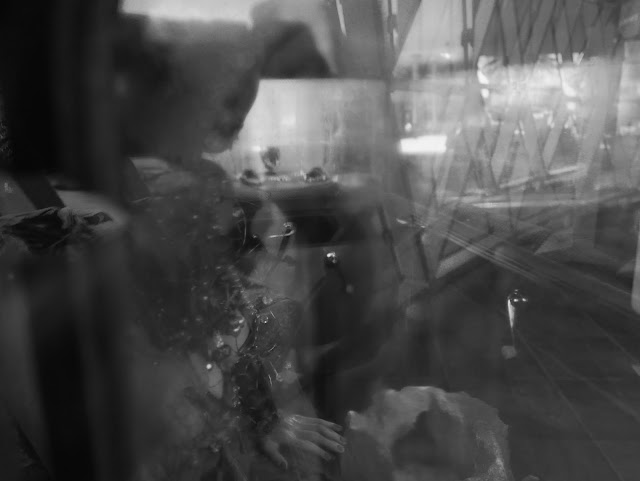 The other creepy thing I've seen here previously is a holograph recreation of the artist himself, walking and talking on screens around the museum. My wife enjoyed the interaction, I shuddered and moved on. I do enjoy the innovations and the exhibits they are bringing to the museum which used to be a rather stuffy mausoleum but some of the surreal experiences are beyond me. I think Dalí would have loved them. 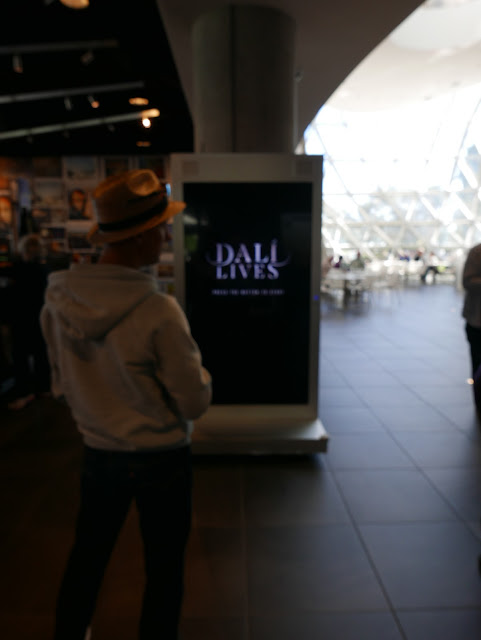 We were at the museum for one specific thing, the display of early 20th entry art focussed on 1929 in Paris when the Surrealists were coalescing around two distinct movements.  Dali landed in Paris and joined the "wrong" group quickly switching his allegiance to the more prominent Andre Breton group and the exhibit shows a short film recreating a clash between the poet and Gala, Dalí's wife (and by her estimation his muse) when Breton and Dalí were falling apart. 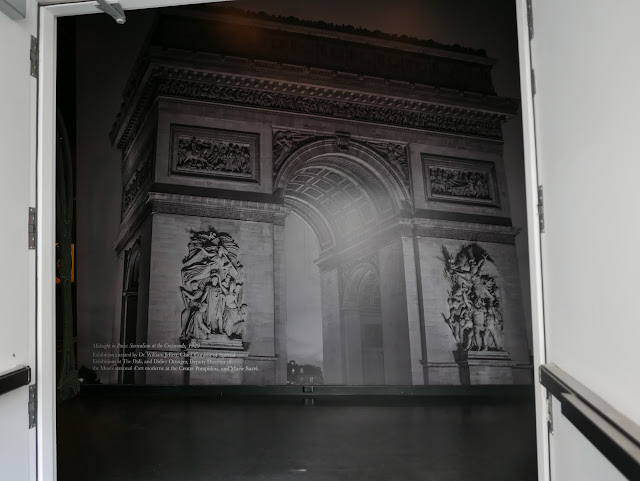 The exhibit wasn't huge but it was full of images of the surrealists and their thoughts plastered all over the walls. Thus using the museum app you can listen to an audio tour of the artwork. The app audio is brilliant, you just hold the phone to your ear like a conversation with no need for headphones but the tours are a total headache to follow. I had to keep asking my wife where to go as she who is quipped with her infallible sense of direction was way ahead of me. I circled hopelessly lost for fifteen minutes staring at the incorrect pieces while ruminating on a totally irrelevant critique in my ear about something across the room. 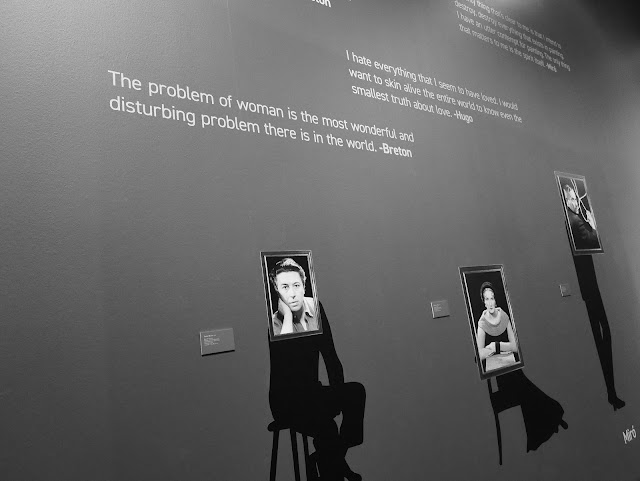 Despite it being a holiday Monday and us being a bit later than usual owing to dog sitting detour it wasn't overly crowded. 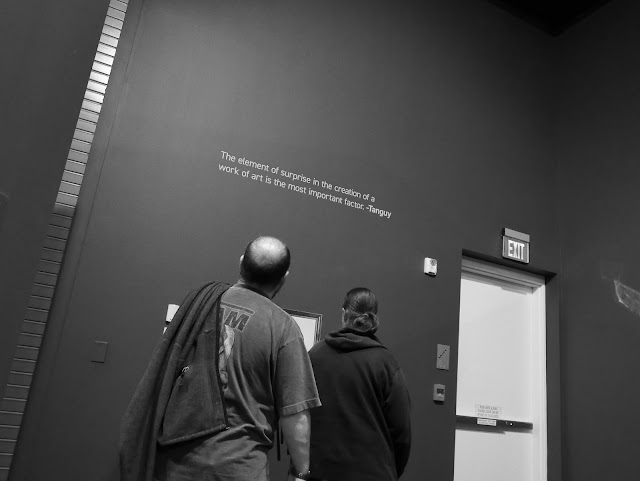 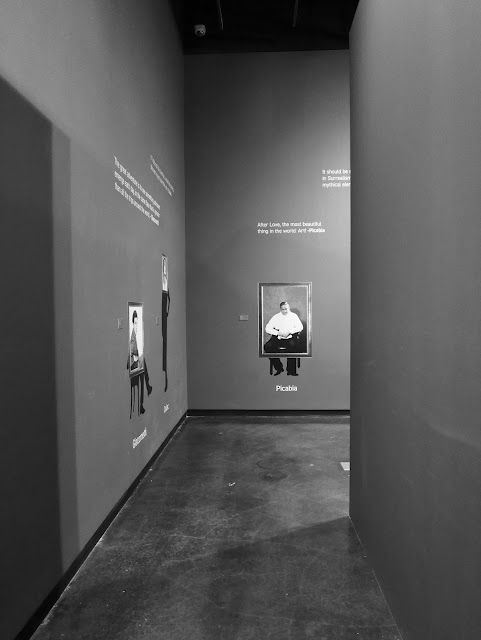 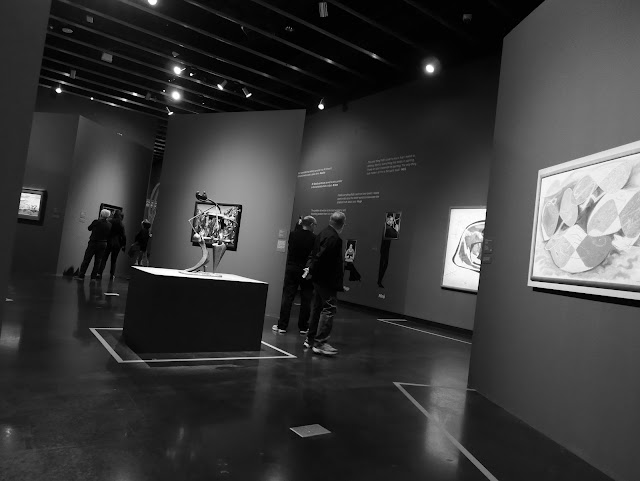 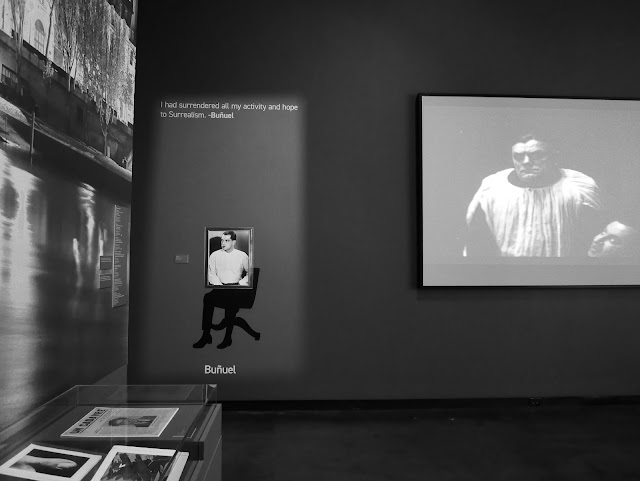 Giorgio de Chirico was among those with a picture on the wall and as usual they managed to put up a picture you don't associate with the more famous artist he became. 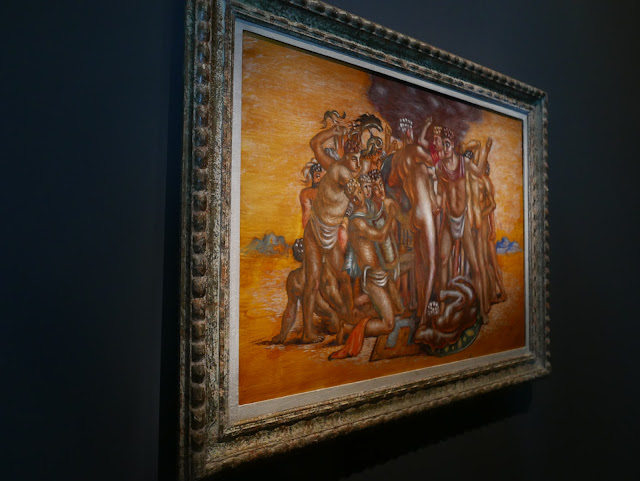 What I liked too was the fact that we got to see the faces behind the art which so rarely happens. What struck me about these avant guards creators was how bland they appeared in real life. They look like bankers and accountants in jackets and ties with neatly parted hair styles and even Dalí who cultivated public eccentricity later looked the part of an eager young salesman early on. 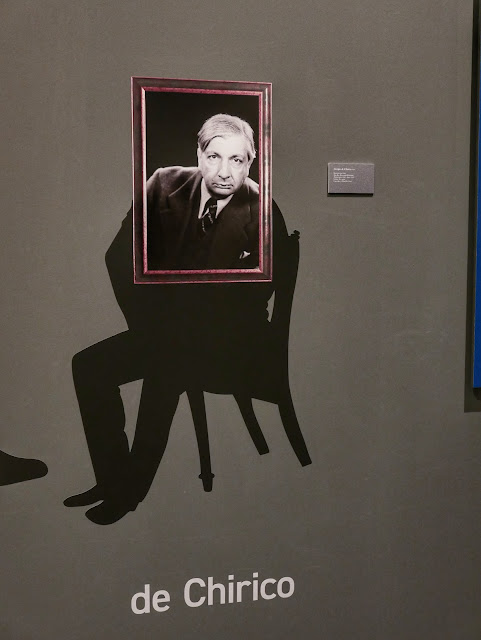 Then there was The Lighthouse by Tanguy whose story captured my imagination. Here was a Surrealist who started out as a sailor on a freighter and on a whim decided (as you do) to become an artist. he was inspired by what he saw so he left behind the workaday world of shipping as a deckhand and started expressing himself. He blamed Jacques Prévert the poet and de Chirico for his decision and  apparently they embraced him. 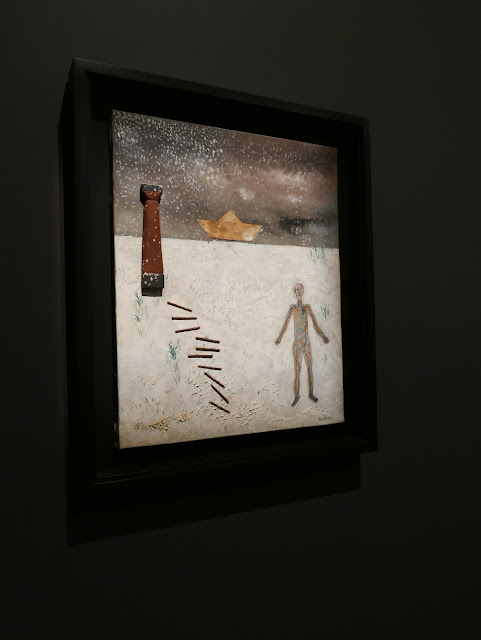 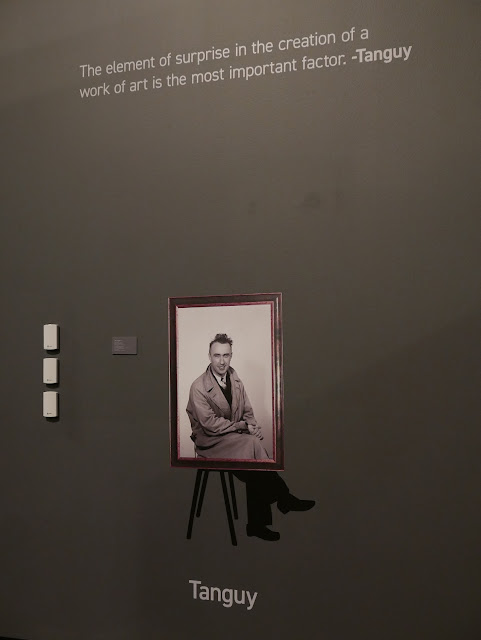 Another of these bourgeois-turned-artist types shows up in the form of Pierre Roy of Nantes who became an architect and went on to forget that and take up painting instead. They had a couple of his works on display illustrating his roots combined with still life and open landscapes and a piece of surrealist tape (!) which really caught my fancy. 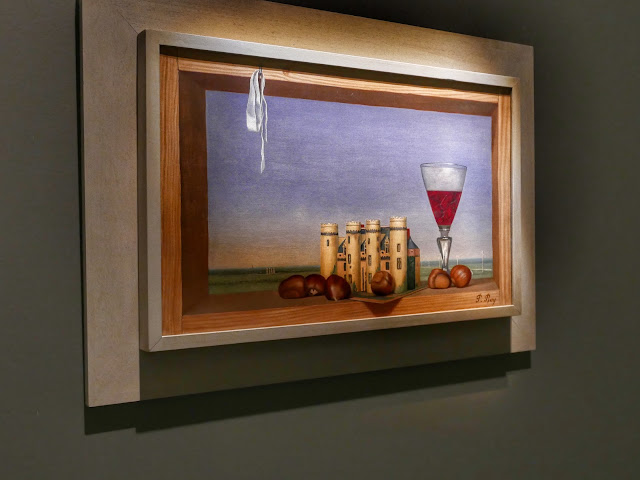 It's one of the features of Dalí that I enjoy inasmuch as he displays his draughtsmanship at the same time as showing off his surrealist message through perfectly drawn works. 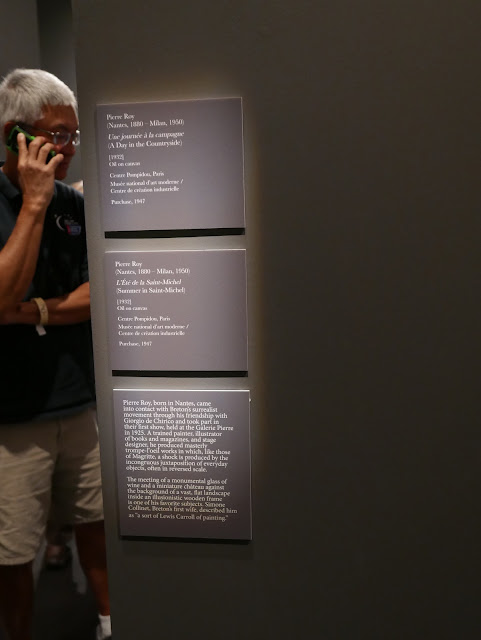 Then there was Max Ernst and Loplop  is best explained by the Museum of Modern Art but was a birdlike representation of his alter ego in art. Remember these people called themselves surrealists so anything goes here... 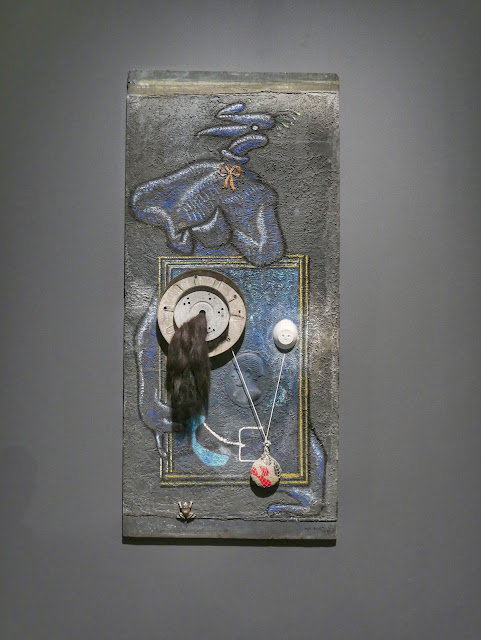 I had never heard of Jean Arp, not even when he is known as Hans Arp. He was born in Alsace when France and Germany were arguing and fighting for possession of the border land so he grew up bilingual and used one name in French and the other when speaking German. Europe can be a messy place so we shouldn't be surprised when reality goes off the rails and surrealism takes its place. Please don't ask me to explain why I like this piece and it captured my attention. Mustache and bottles by Jean (Hans) Arp. There: 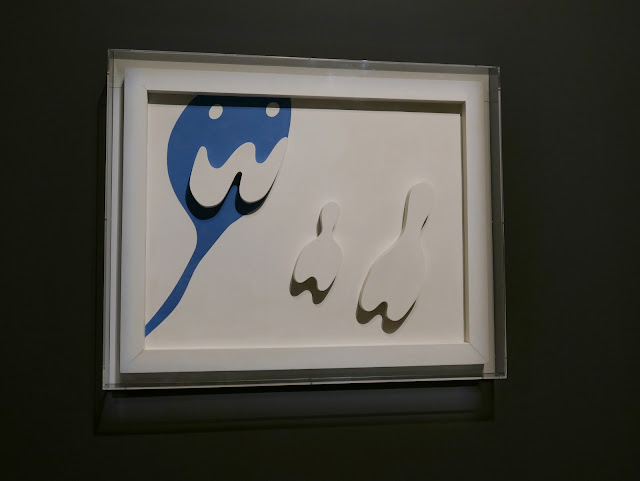 You wander through a decade of time, a period of intense living by survivors of intense warfare, facing the certain destruction of their world in a few years more and yet they hungered after meaning and explanation and description of life and they fought each other and the establishment to prove they were right. It must have been an extraordinary time and I knew nothing of it as I had to wait anther thirty years to be born. And now I'm old the whole proposition of scrambling to be heard and to be right seems nonsensical. What they left behind justifies it all. 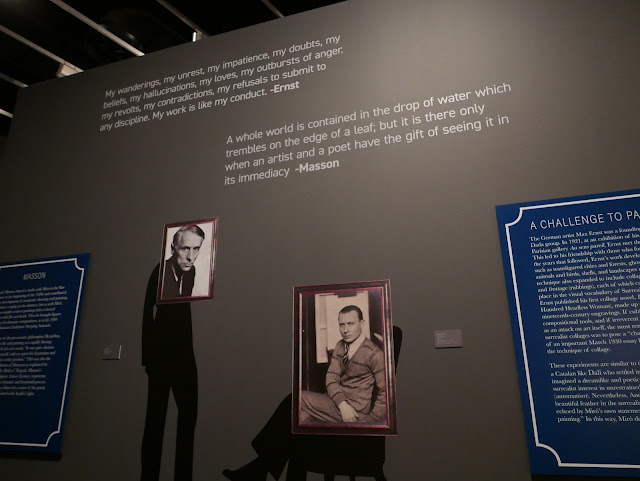 Even if it can be hard to understand and sometimes even to enjoy. I saw some early street photos taken around Paris and I was struck by how banal many of them were, fuzzy black and white prints of streets and trees and fog, stuff you could expect to find on Instagram by people barely able to hold a phone camera steady. Yet photography was break through art form for surrealists, its immediacy and documentary qualities exposed them to new ideas of how to create art. The funny thing is, then as now Photography as Art is a tough concept to sell to the mass of people used to photography as phone snaps, or billboards, TV advertising. In 1929 the idea that a photographic print could be Art was laughable except to these people. 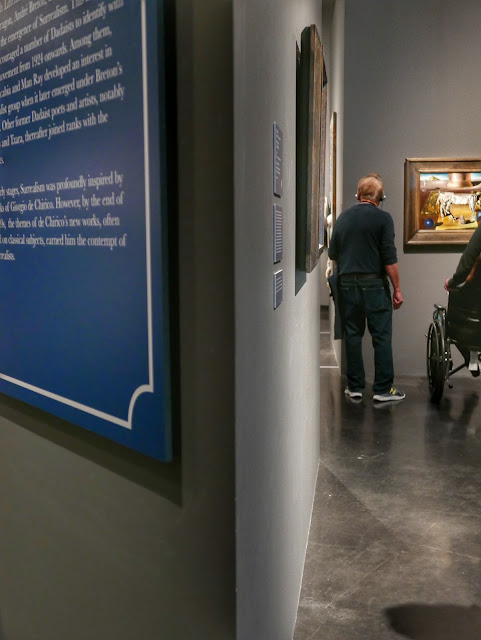 Alexander Calder is known as the Sculptor of Air. Considering he died in 1976 he offered a revolutionary view of sculpture by creating hanging pieces and as you can see artwork that is as ethereal as cobwebs: 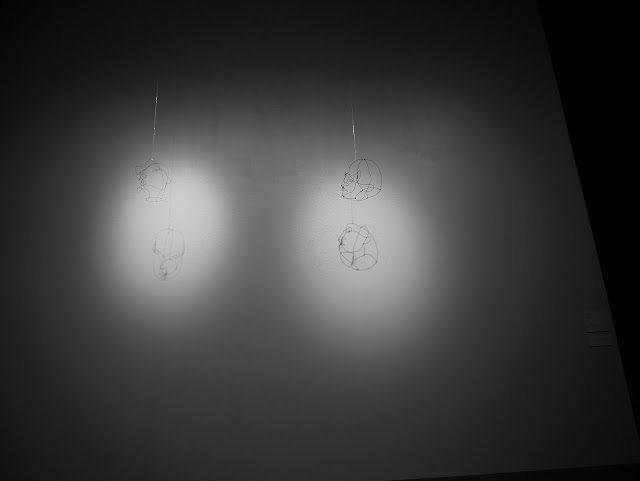 There is still plenty of time to make a trek to St Petersburg, a city worth a visit anyway to check out for yourself the surrealist ferment ofParis between the wars. Well worth it. 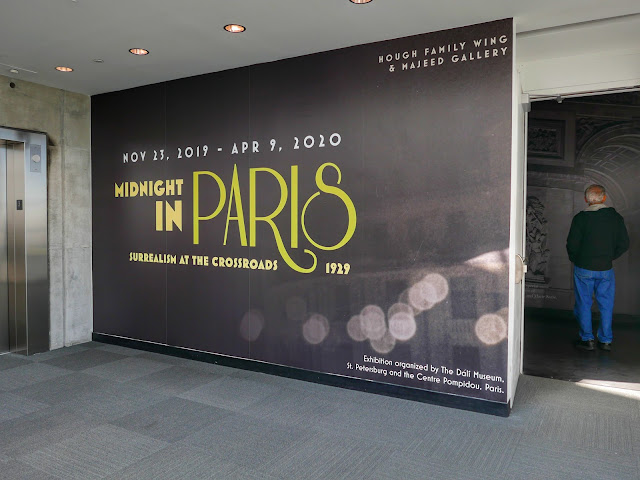 As much as I wanted to get back to Rusty and then get home I like to stop and look out through the hurricane proof armored glass. 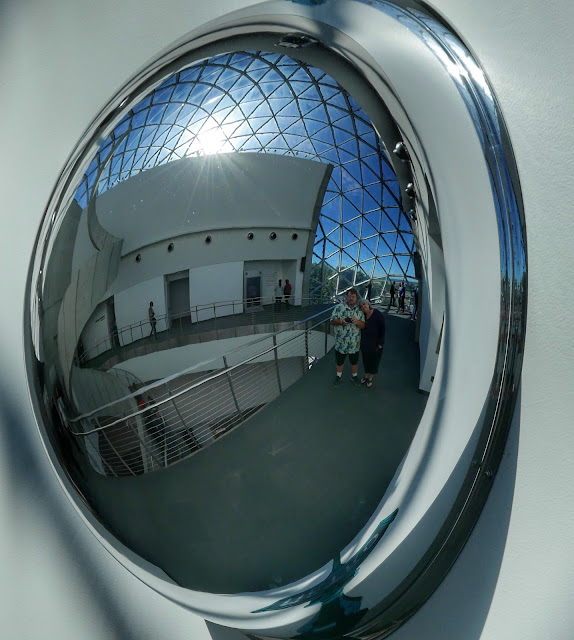 It gives a view of the gardens around the museum and Tampa Bay in the distance. 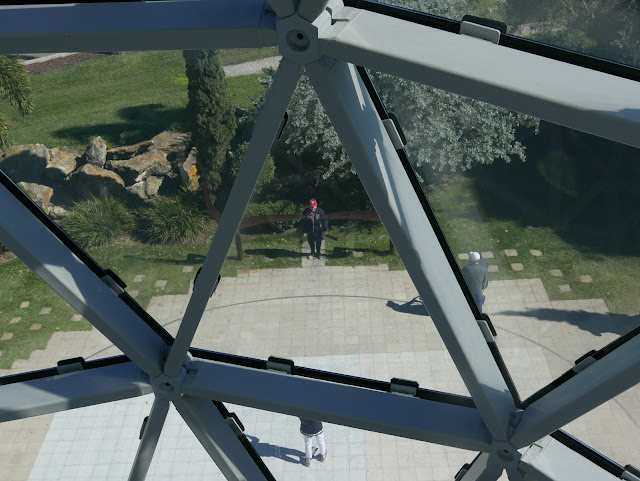 And as this was the MLK holiday the parade that was to make leaving the city slightly awkward was getting underway for the long walk to the stadium near downtown St Petersburg. 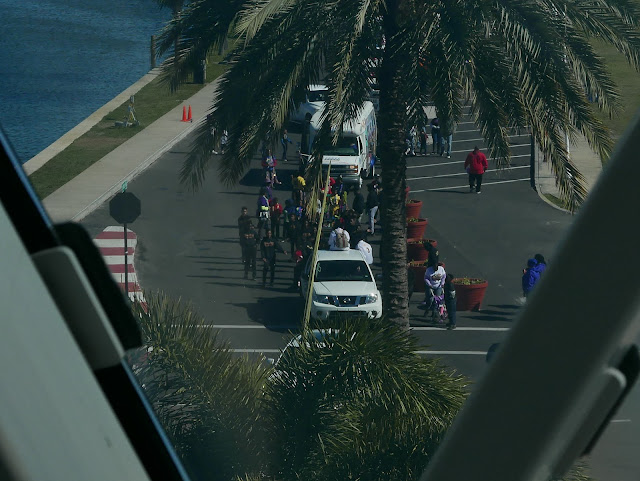 Rusty is an excellent traveling companion as he rides the back seat silently and uncomplaining, sleeping, sitting from time to time and looking out the window at scenery. He is as always no trouble at all. 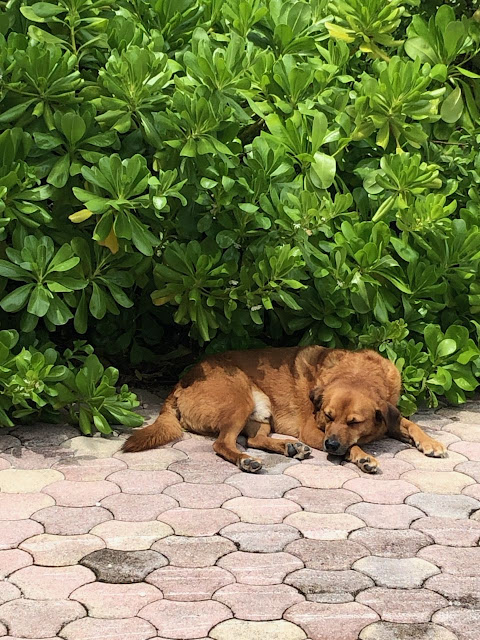