First posted in April 2009 still worth a visit! And I drive by it quite frequently and don't take/have the time to stop! Silly me.


Were I to ask someone to name three state parks in the Florida Keys, I have an idea the answer might be, Bahia Honda, John Pennekamp (especially if they dive) and most likely Fort Zachary Taylor if they frequent Key West. I use the annual State Parks Pass to explore as many of the parks as often as I can as it allows free access. It costs something like $85 per calendar year for the pass while a day ticket for one person is $3.50 at the park entrance or $6 for a car. Ironically two people on two motorcycles thus cost more than four in a car! 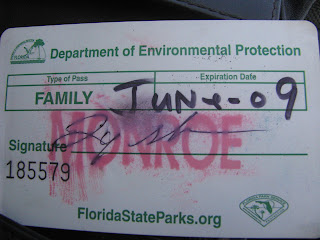 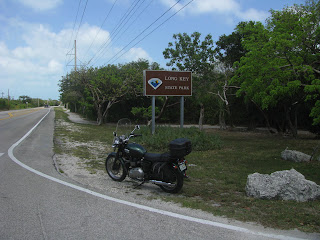 Long Key State Park is at or around Mile marker 67 just south of the City of Layton (see my essay of January 17th 2008, http://conchscooter.blogspot.com/search?q=layton), and it is in the pantheon of second class State Parks in the Keys just because they tend to be less well known. I like it a lot and on my first visit to the Keys in 1981 I stayed at a campsite on the beach, such as it is and used it as my base for exploring further. Probably one reason why Long Key suffers second class status is because it doesn't have a beach though it has a massively extended waterfront for a park a thousand acres in size. 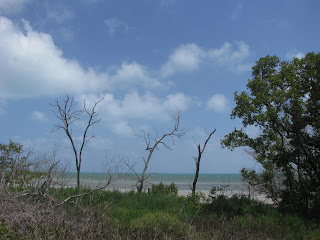 The park is long and thin like it's namesake key wedged between the Straits of Florida and the Overseas Highway. The park promotes birds as one its major attractions including "herons, egrets, willets, sandpipers, plovers, terns, and seagulls," which should be enough for anybody. Additionally there is canoeing on the Long Key Lake in the middle of the park and there is camping in the slice of parkland alongside the Overseas Highway next to the water: 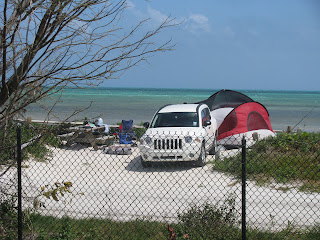 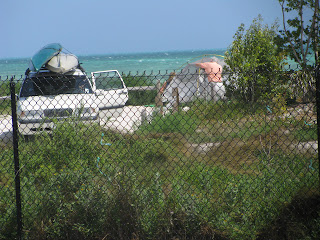 The day use area has a small slice of sandy beach for people riding motorcycles or with picnics: 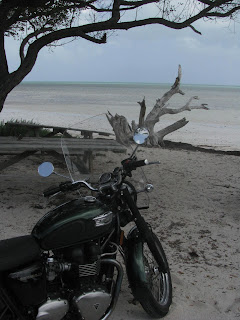 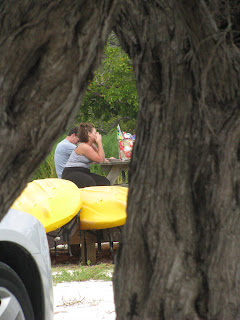 Which was where I spotted a piece of artwork as I ate a granola bar and emptied a thermos of tea for lunch: 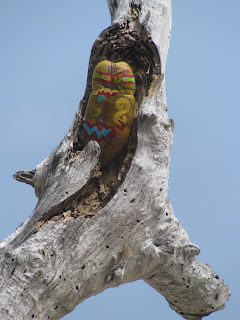 For some people standing at the water's edge and admiring the view is an entirely satisfactory activity: 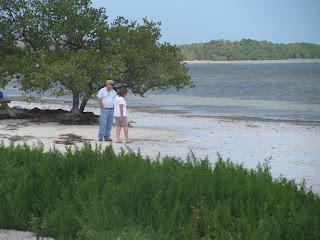 For others the way to pass an afternoon is to stand thigh deep in salt water water to try to catch fish. This dude was quite a ways out proving that my little pocket camera has quite decent reach with the built-in telephoto, and also that the water shelves very gently along these islands: 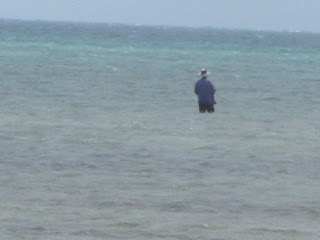 Some people enjoy cycling the roads inside the park, a way to enjoy pedaling and not get run down on the highway: 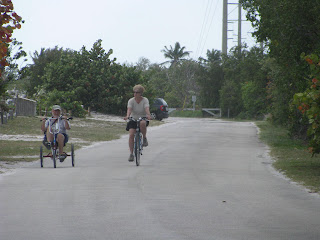 For myself the plan was to take a walk as I haven't been out in the woods for a while, so I headed down the main road... 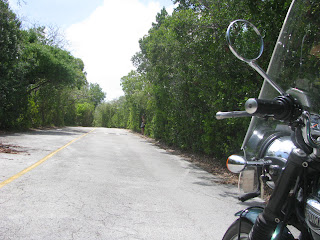 ...to the boardwalk at the head of the main trail which heads towards the beach: 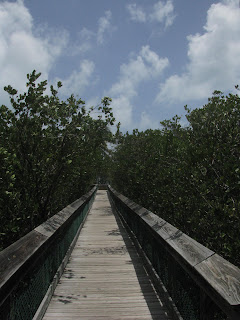 I found a chair parked rather mysteriously in the shade as though someone enjoyed taking in nature's glories in comfort, so much so they dragged their own chair to that very spot: 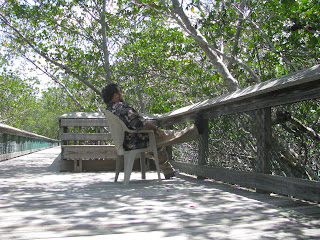 Along the way our thoughtful Park service puts up little notices describing flora, fauna and sights to left and right: 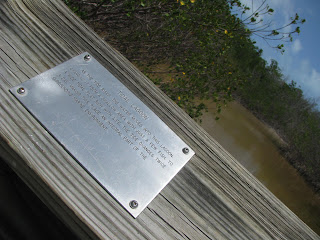 There was also a sturdy observation platform built above the mangroves but the view was I have say, somewhat less than enthralling: 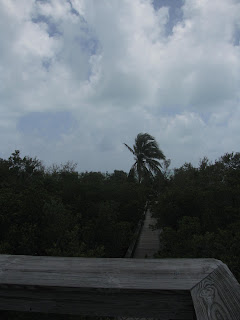 My goal was the main circular trail through the back of the park on something they call the Golden Orb Trail which is named for a spider and is about a mile and a half long. The helpful signs suggest a leisurely hour long walk and even though I was wearing motorcycle boots and long pants I covered it in a little less than that. 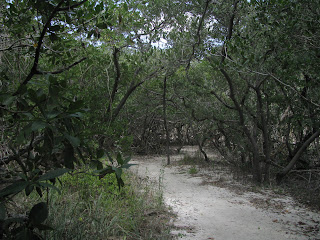 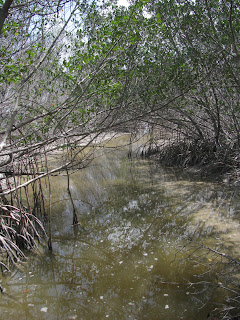 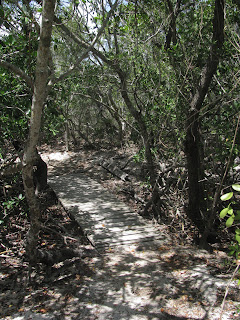 The second half of the trail after I crossed the plank bridge shown above, is described as a hammock environment, which in South Florida means an area of raised dry land above the water level such that trees can grow in real dirt. Only thing was, this was the first sandy hammock I had seen. It reminded me of chaparral seen in western states: 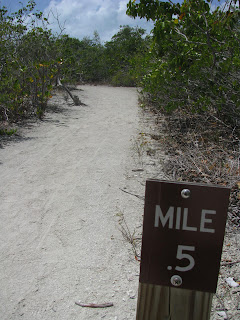 And I was not entirely alone. I met another walker, rather more suitably dressed than I, and we played trail leap frog, exchanging remarks while not willing to impinge on each other's privacy too much: 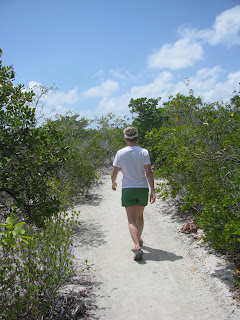 She was a visitor to Florida and spent more time than I on the useful little signs along the way, though we exchanged a few comments as we passed each other. 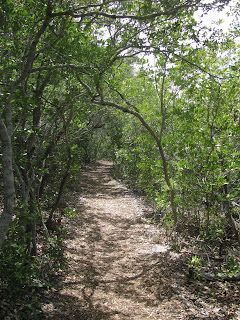 Closing in on the parking lot, where the Bonneville was parked in the shade, it being that warm, the trail started to get the mulching treatment a sit passed trough buttonwoods that look more like a "proper"hammock to my untutored eye.
Thence home, leaving unexplored the canoe launch and the Layton Trail, across the Overseas highway. The good thing about a parks pass is that it encourages return visits.
Posted by Conchscooter at 12:00 AM 2 comments: