I was in the south of France in the summer of 1978, riding my Morini 350 twin and it was hot and sticky and dry and I was not ready to ride far. 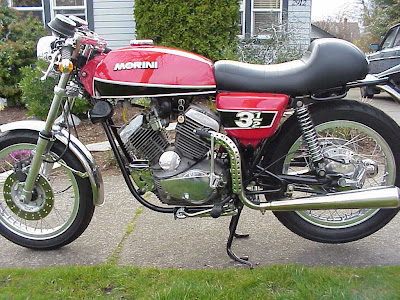 With frequent stops and a lot of lane splitting I got stuck in traffic in all sorts of exotic places, St Tropez heads the list of any self respecting tourist in the South of France, but I was not impressed. My bike had clip-on handlebars forcing me to ride in a crouch, while my tank bag kept flopping from side to side so that I had to hold it in place with my forearms which got sweaty from the contact. Thus it was that all I could think about was finding shade and water, trapped in the long line of cars inching to nowhere. Shade and water meant I had to escape to the hills, so I abandoned any pretensions of hanging with the rich and infamous on the beach and I rode for the hills. 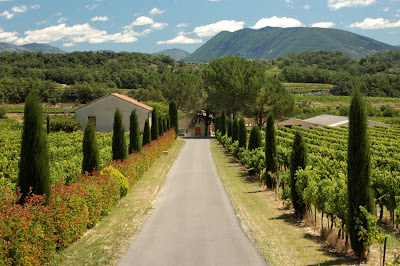 It was hot work even when I gained elevation and there were still slow poke cars on the roads to prevent me moving smoothly at speed, but I got more of a cooling breeze the higher I went so things improved gradually. Besides, even loaded with luggage the Morini was great fun to ride. Nowadays a 350cc V-twin on tires that seem no wider than beach cruiser bicycles tires would not appear to be much good for riding anywhere out of sight of home, but that Morini took me to North Africa and all over northern Europe over the course of three years that I owned it. Eventually a friend of mine rode it off the road after he nagged me to death asking to ride it and that was the end of that. 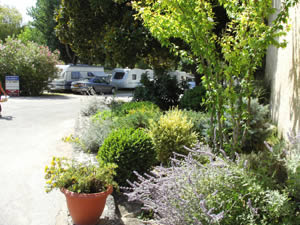 I found a campground much like the one pictured above, a bunch of camping trailers mixed in with space for tents and tons of people everywhere on their much anticipated summer vacations. I picked a spot and put up my bright blue two person tent. Inside I lay next to my belonging and everything was suffused in blue but it was not restful. It was hot and airless and bright under the southern sun under a blue plastic flysheet. I stood outside the tent and breathed in fresh,untainted hot summer air.


"Hey! You hot?" the man in the cool shady awning stretched out next to his roulotte waved a piece of delicious looking red fruit. Sure I said, sucked in to his orbit by the shade and his smile. I was young and innocentg and took everything and everyone at face value. We sat and talked while his wife, unseen, clattered dishes in the travel trailer behind us.

We talked about where we were from, me from Italy he from Paris. We talked motorcycles and I told him how bored I was by life down on the farm. "I escaped that," he said, "by joining the Legion." Huh? "I've been everywhere," he said. He talked about the Congo and Algeria, he talked of fishing in the Indian Ocean and driving trucks in jungles and deserts. He saw me looking at his hand. "That was never a problem," he said and I could believe it as I had not noticed his weird lobster claw fingers for the longest time. "I grew up like that," he said looking at the huge deformed pink thumb and the wadded up single finger that grew out of the stump of his hand. "The Legion never minded when they understood I could do anything anyone else did." He spoke in answer to my unspoken question.

His wife, a pretty, slim woman in a summer dress with the good manners of a middle class Frenchwoman came out and invited me to dinner. We ate at the table under the awning by the light of a gas lamp and the conversation continued late into the night. My host was what we call a "contractor" who ran his own company providing services and "personnel" around the world. I was fascinated and a little scared. "He isn't always so kind," his wife said smiling, as he told a story against himself of some close shave in as former French tropical colony. Implicit in her comment was the suggestion of severity if not savagery. he grinned the mirth of the amoral. 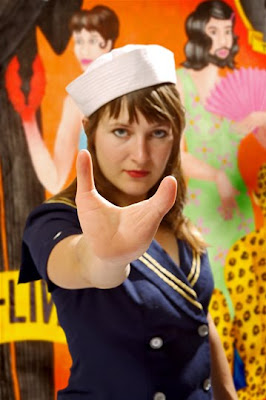 Had the Internet existed back then I could have looked up the hereditary condition called ectrodactyly which is caused in hands or feet by some chromosomal alteration. I could have looked him on faceboomk perhaps, under gunmen for hire, governments overthrown on demand... As it was I watched his lobster claw in open fascination and admiration of his ability to ignore daily complexity even when using a deformed hand. He was amused by my fascination at his stories of derring-do and by his dexterity with the hand. "You need to get out of the farm and see the world. Come and work for me." The suggestion shocked me.

He renewed it the next morning. "I'll show you the world," he smiled as he poured me a coffee. I got on my motorcycle and fled after thanking him profusely.

I wonder what might have happened to me had I thrown my customary caution to the wind. Probably nothing much as I never did see myself as a dog of war. On the other hand...who knows what lies within any of us and perhaps I would have made a bloodthirty mercenary with the best of them. How odd are the crossroads we pass, and ignore, in the journey of life.

Posted by Conchscooter at 11:44 PM 3 comments: Links to this post

Police have to have a reason for stopping a vehicle that is driving around minding it's own business. Lawyers call it probable cause. So you ask yourself why would a cop light up this motorcycle...where's the PC you might ask.

No helmets? Nope, in Florida if you're 21 and have medical insurance you can ride helmet less. Lights? Nope the tail light is properly lit. Look again. Closer.

Tag? License plate? Even in Florida land of the no common sense rule, license plates are required. There are 97 different designs for cars (I kid you not, I counted them last Tuesday at the Big Pine DMV when I renewed my registration) and two for motorcycles. But you do have to display them. Nice thighs are no substitute.


- Posted using BlogPress from my iPad
Posted by Conchscooter at 9:18 PM 2 comments: Links to this post

There used to be a pier for human use here at the corner of South Roosevelt and Bertha. Now there isn't.

These days there are a series of platforms set out on the water.

This is where birds of various feathers gather to matter and catch a few rays.

Of course you'll always find the odd confused human who believes he's one with the birds and thinks they want to share their space with him.

Birds are much more accepting of us in their space than we are of them in our spaces.

Posted by Conchscooter at 7:06 PM 2 comments: Links to this post

Setting sun, parked Bonneville, Conchscooter must be on the prowl for pictures.

And this is typical turf for the pocket Canon SX100.

Ooh! My almost-favorite Vespa! Bonus! It's one of the awesomely slow PX 150cc revived classics. It's cute, it's a two stroke and it has a spare wheel and a kick start in addition to an electric boot. But it will barely wheeze up to 53mph, far far less if you face a headwind.

How do I know? I had the Indian built model until that blew up after 2800 punishing miles. Cute but useless.

Back to happier themes, Conch cottages and palms.

Eliza dead ends into the House of Brats school, but it's a lovely ride all the way.

I mean, really there are just too many of these things.

And here's one more.

And this lovely old rusty roof from another era.

Too bad I had to get to work.

Posted by Conchscooter at 2:00 PM No comments: Links to this post

Blood Sweat and Aggro On Sugarloaf

I had determined it was time to increase my dog's education in the ways of the country, so we took a stroll on an apparently sylvan trail off Crane Boulevard.

The bees, in decline in much of the world thanks to our superb environmental stewardship of God's creation are staying busy in the Florida Keys. They made me exhausted just looking at them as they had insecticidal intercourse with an innocent bush.

When suddenly a posse of an overfed cat and an over hyped Very Small Dog waylaid us.

Cheyenne took her usual evasive action, ignoring the intrusion while continuing to seek nourishment in the chlorophyll, small yappy dogs be damned.

My evasive action consisted of ignoring the little shit while continuing to read as I waded into a large pool of extremely slippery mud. I lost my dignity but my backwards cartwheel was apparently so spectacular the yap machine was brusquely silenced and he retreated, terrified to the bosom of his uncaring family.

This was rather fun. I felt like a small boy as my middle aged knee stung and bled exactly as it did when I fell off my moped, repeatedly, forty years ago. Ah youth! The worst thing about aging is that you are supposed to age with dignity; while I understand the concept I fail hopelessly time after time on the practical.

On the other hand I do notice the oddities laid out in the various communities the length of the Keys. Hands up anyone who routinely parks a boat in a horse stable? I think this is the sort of lateral thinking we should see more of, as M1 continues to shrink nationwide.

No prizes of course, no contests on Key West Diary, and of course never any boring video. Just a few pictures of some mysterious growth or other. It must be poisonous because there were no bees here. It looked good though, much like the color of the juice dripping down my leg. Small aggressive dogs should be banned.


- Posted using BlogPress from my iPad
Posted by Conchscooter at 7:28 AM 2 comments: Links to this post

Everyone who has lived in Key West knows your best chance of a good piece of fried chicken is to be found at convenience stores and gas stations between Homestead and Key West. The trick to getting the tastiest piece of chicken is to be on hand when the breasts and thighs and wings come out of the fryer. Or you can go new age and get a skinless baked breast which is okay but...let's think about this. Dion's chicken should be fried. It's the law. Chicken done right indeed. Check this out if you don't know what I mean:
2008 Chicken Essay

I took the picture at the Dion's at Truman and White and I really liked the sign. DO NOT BEG FOR CHICKEN HERE. By Order of the Management! You have been warned. Buy your own (it's not expensive).


- Posted using BlogPress from my iPad
Posted by Conchscooter at 2:55 AM No comments: Links to this post