Indian food has not managed to take root in Key West. There was a sit down restaurant for a while at the thousand block of Truman and the food was quite decent but perhaps owing to the lack of parking it didn't last long. They had some Indian dishes at the former Deli after the longtime owners sold to some newly arrived hopefuls, but that place has turned into the new home of Key West's dessert restaurant. 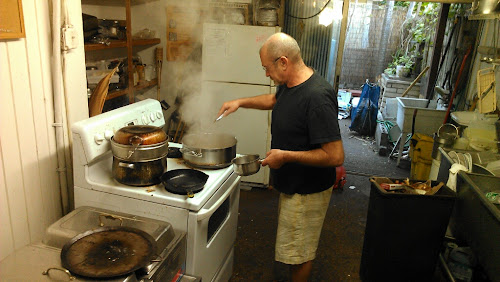 So when my wife in distant Puerto Rico said try the Indian I was not ready to believe her, but I drove by Badboy Burrito and of course she was right. Instead of being closed as per usual on a Sunday, the door was open. Intriguing. I moseyed in looked around. I liked the table with tablecloth, a nice touch in a small eatery where one doesn't expect to buy food and sit. I have taken a stool at the window which is okay when you are on your own with a burrito but having a table, especially with fiddly Indian good is important. 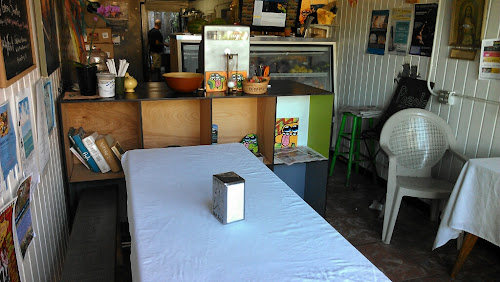 I snapped a picture of the menu as a reminder to myself because the owner hasn't yet printed up to go menus. The schedule is basically dinners weekdays and all day Sunday. Essentially he is operating the reverse schedule to that of the burrito operation, which is actually a smart use of the space, often done in poorer countries. This is as far as I could see a vegan menu so everyone gets a chance to taste something Indian once again in Key West, a good thing. 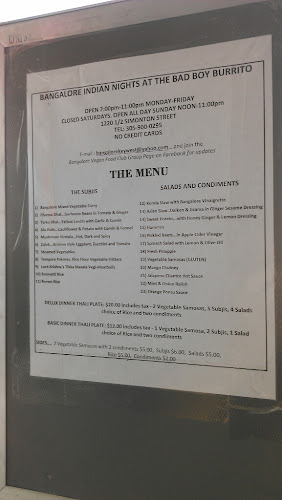 I was intercepted by the owner, whose accent matched mine so we got to talking and a very interesting conversation followed. Philip had some thoughtful ideas about emigrating and he left Europe just a year after I did. In Philip's view the US offers much greater flexibility and self confidence. He compared the societal changes coming to this country as an evolution of public opinion. Health care, decriminalized marijuana, gay marriage, wire tapping and wealth inequality are all issues that are being debated and discussed. In Britain by contrast Philip says society is a fossilized landscape, wrapped in fearfulness, surveiled in ways Americans would never accept. His cheerful faith in the future was almost as refreshing as the cooking smells coming from the kitchen in the back. 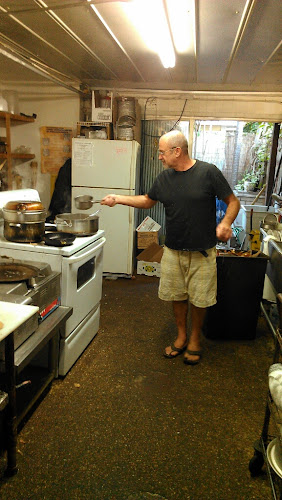 We shook hands with a promise to meet soon. I went on to get my dinner which fortunately still tasted good though it wasn't Indian which I was now craving. I had no particular conversation with the staff at El Siboney but I got my dinner and drove home in a thoughtful cheery mood. Dinner and a movie will be Indian flavored soon I have no doubt. 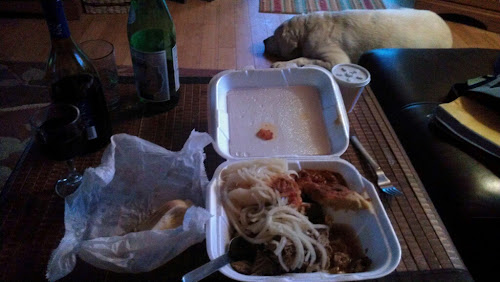 Cheyenne enjoyed her long slow afternoon walk enough that she only had strength to eat half her dinner, as did I, and we passed out together at a ridiculously early hour, a deep refreshing sleep to end a companionable Sunday together. Who needs a wife (still enjoying Vieques as it happens) when you have good food, a happy dog and a deep desire to sleep.