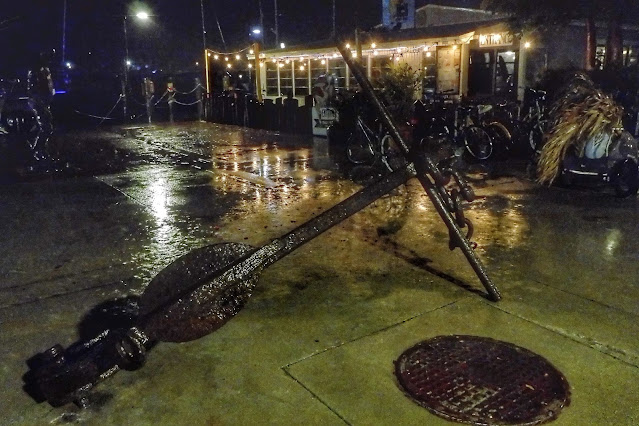 I'd much rather have walked Rusty than come in to work, but I dutifully left home early, before five and found an empty open highway, not a power line out of place, not a leaf in the roadway. I knew the power was good because the electric clock wasn't flashing in the living room, so despite text warnings from Keys Energy everything worked as it should. In these islands used to tropical weather that was no surprise. 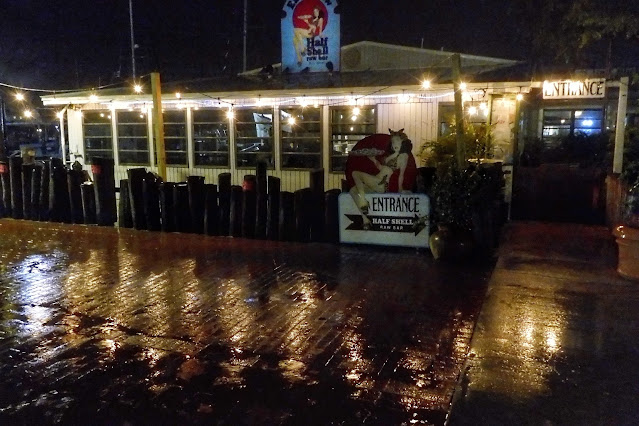 I had time to spare so I drove down to the Bight and stepped out under an umbrella with my waterproof pocket camera. It was windy and the rain was slashing, trying to get under my umbrella as I walked out on the docks. 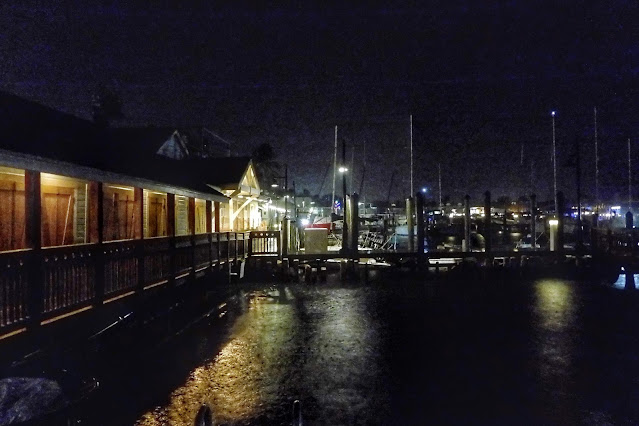 It did not look to me like the old hands in the harbor had taken the time to prepare for the storm as everything looked as it usually does, just a bit wetter. I dare say this afternoon one could even go for a fish as gentle southeast breezes are expected to return, under sunny skies. 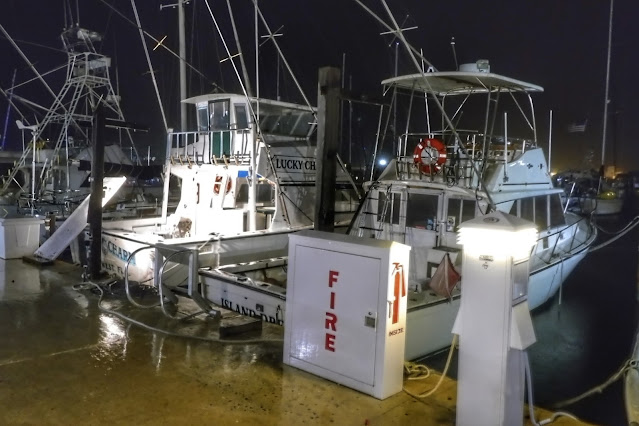 If you hang around people debating the value of surviving a catastrophe you'll find some that really like the warnings you get before a storm and others who prefer to be surprised as by an earthquake. I've lived through both and am decidedly in favor of the hurricane survival mode. Lots of warnings, and in our well built world (mostly) it's hard for anyone to die of hurricane related weather. 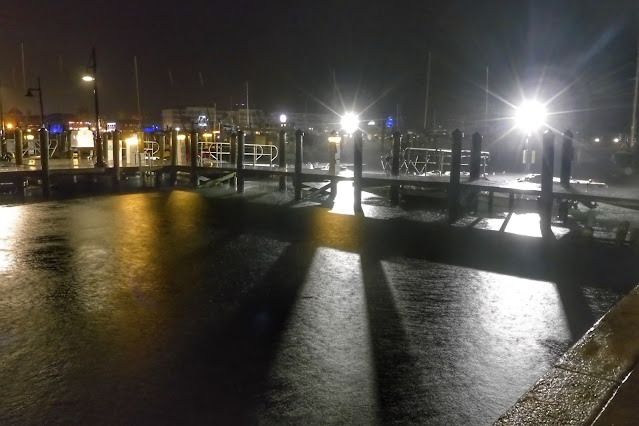 In the past hurricane warnings tended to get overblown but this year the city and county managed to be alert and keep control and not force evacuations where none were needed. It was windy and I struggled to control camera and umbrella at once but it wasn't   enough wind to knock over but one tree on Simonton Street, which is cleaned up already. I blame the umbrella for some fuzzy pictures here: 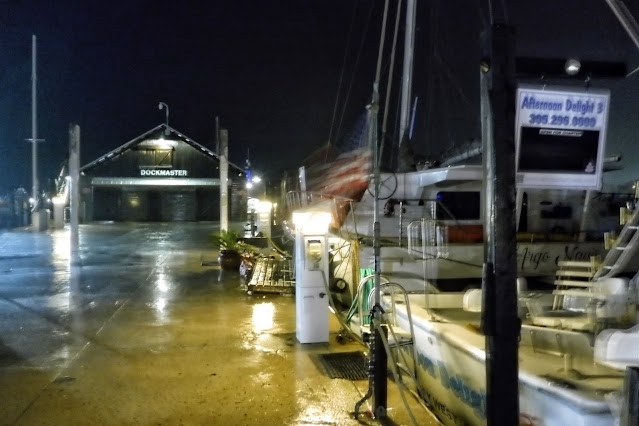 I wandered around for a few minutes surprised to see dinghies still in the water but there they were in the water getting rained on. 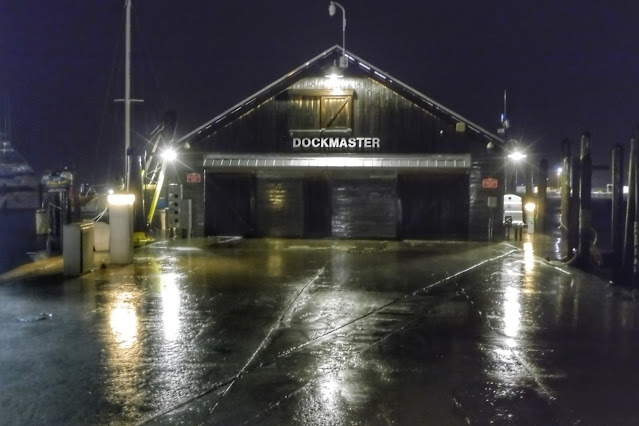 I talked to a friend of mine who went through Hurricane Irma as well and when I remarked how much better this is he said he was getting PTSD from the category four that caused extensive damage in the Keys. 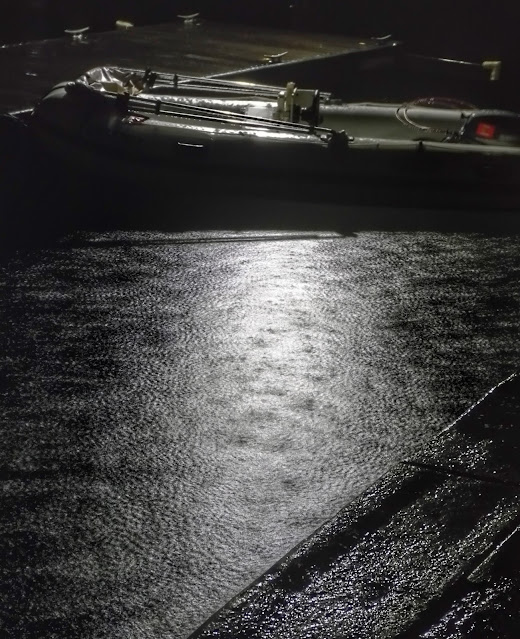 Rain wind and unpleasantness leads me to ponder the people who don't keep their dogs indoors, people who don't have waterproof homes and people who do but don't believe in climate change. Maybe I overthink stuff but I was never as relieved as when we moved from home ownership to becoming renters. To leave the  Keys we give notice, lock the door and drive away.  If I never have to speak to a real estate agent again it will be too soon. 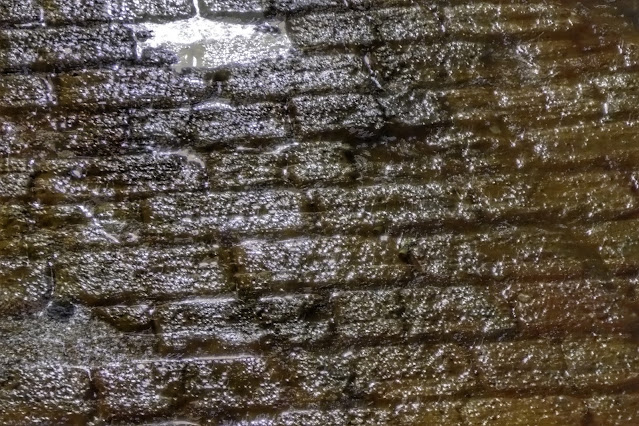 To some extent anyone who lived through Hurricane Irma has to have some PTSD after that breakdown of society. It's a humbling experience not to have running water  never mind no electricity Internet or fuel. For days. 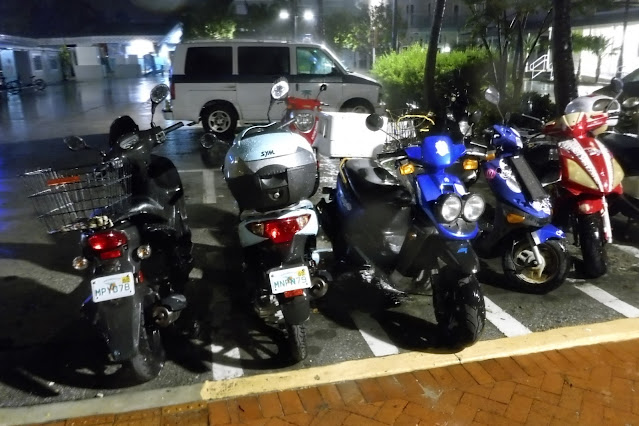 I have heard the suggestion, from a friend who needs to remain nameless for exhibiting excessive commonsense, that we not name storms until they are hurricanes and possibly Category Two storms. We live in a world of hype, fear and gullibility so I suppose any attempts to suggest to people they learn to manage with the information they can gather themselves is open to the charge of snobbery or some such. 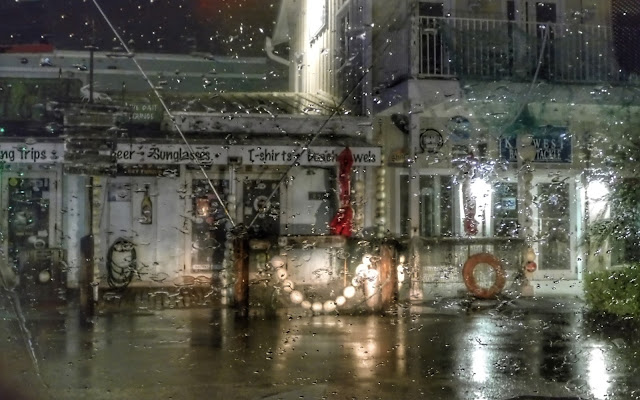 It was a rainy day in Key West and happily I could not keep the umbrella still to save my life. So I accidentally made rainbows. I think that after the rain blows over, the stray dogs will I trust, dry out, and one former stray dog at least will get off the couch, stretch and go outside to great the proper arrival of summer. It's called hurricane season but there will now be a pause while we enjoy some swimming and blue skies and boring uninterrupted tropical living. Until next time when we will re-evaluate. 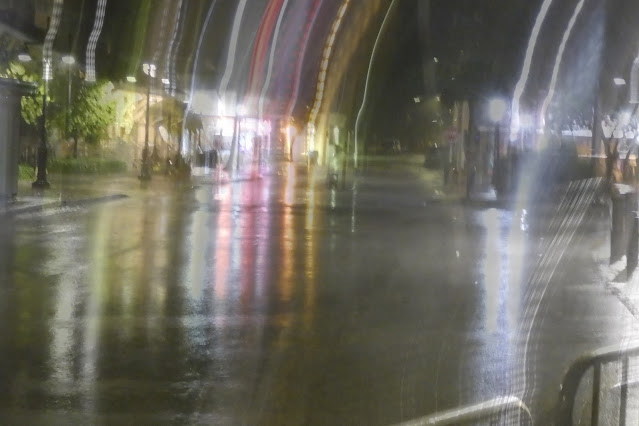 I am not one to underrate the power of a tropical weather system as I have seen enough of them blow over to know how bad they can be. But Tropical Storm Elsa has done not much to impress me. 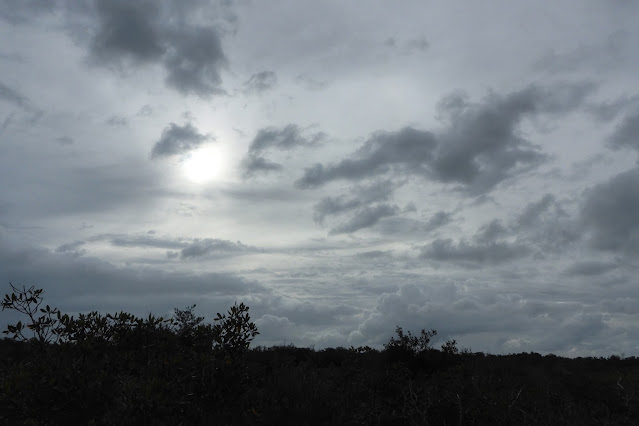 After a fast gallop across the Atlantic the storm slowed down, passed over land masses in the Caribbean and after one moment as an actual hurricane, the tropical storm has stayed well under 74 mph. 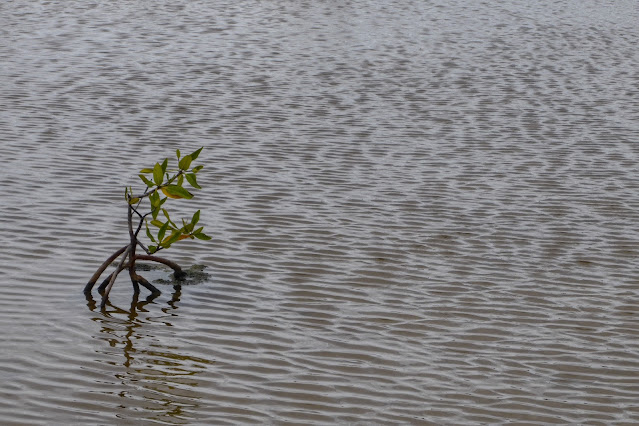 I must say I have been impressed by our community leadership facing off against this potential buzz kill. After a year of pandemic tourism starvation no one wanted to see Fourth of July wrecked by some rain so the response to the threat was muted. An advised evacuation of mobile homes they said, suggesting residents stay with people in more solid homes. 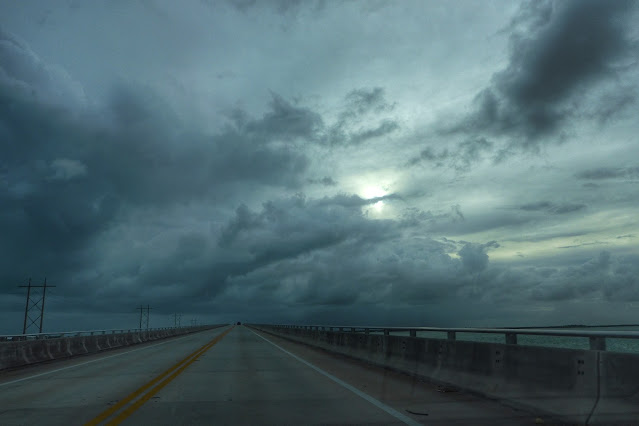 Years ago the threat of a storm led to shut downs, evacuations and a loss of business. Then the storm blew through and nothing much happened. That got old. 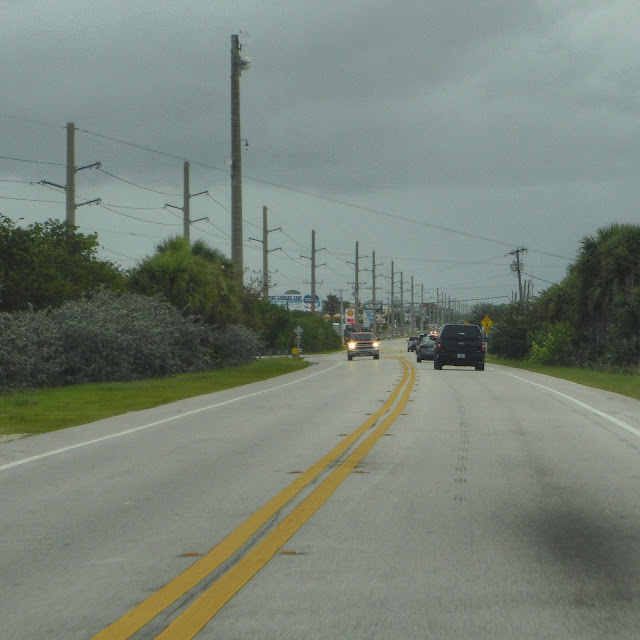 We've had some crappy storms. Wilma in 2005 followed Katrina which sideswiped the keys and destroyed New Orleans so when we had flooding later that year we were all bit freaked out. There was money in those days before 2008 and car dealers set up tents on Stock island to help replace the ten thousand cars drowned by Wilma. Trash was everywhere but it was nothing compared to Irma in 2017. That was a hurricane for the ages and that I don't want to live through again. 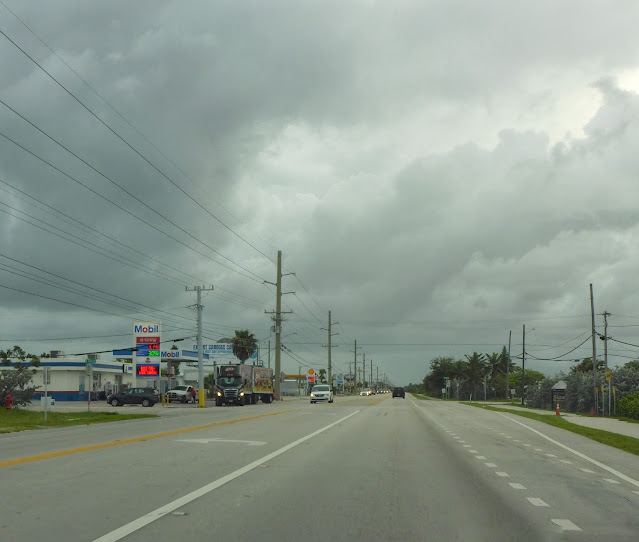 Tropical Storm Elsa is scheduled to arrive overnight between Monday, yesterday and today Tuesday. 50 mph winds over Cuba may strengthen a bit but the National Hurricane Center in Miami says the eye of the storm will slide westward and pass over the Marquesas Keys 15 miles west of Key West. 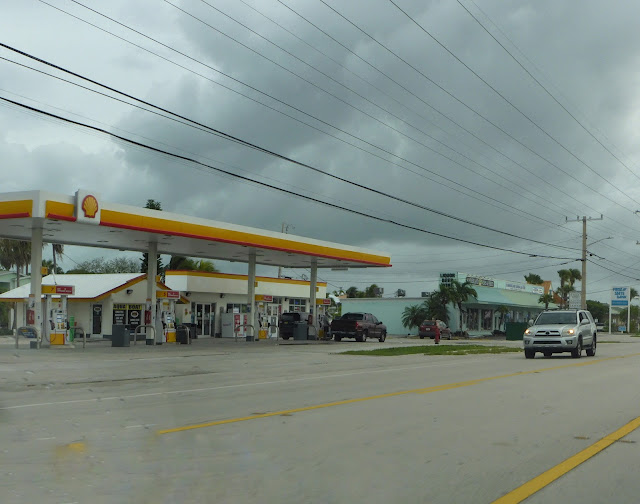 Tourists have been leaving for sure, RVs and boats on trailers have headed for the mainland but this isn't an evacuation situation. I worked overtime this weekend and we got a few calls from people wondering if the Keys were evacuated. Really? Gas stations have been busy but a tropical storm of these proportions didn't stop fireworks on the fourth (and Rusty was none too happy about that). 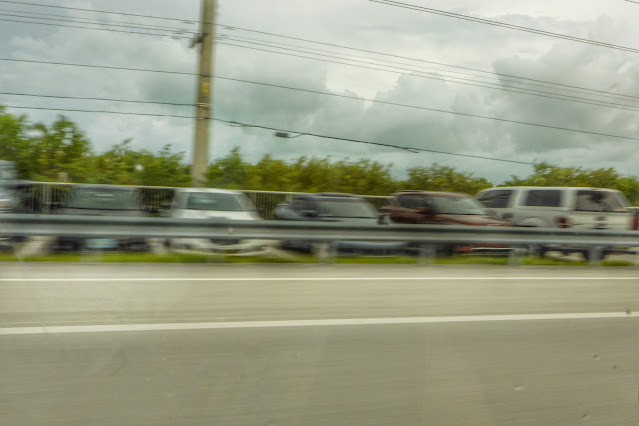 And yet we see people parking their cars on the approaches to the bridges on the Overseas Highway. This is a tactic deployed to get cars above potential flooding when conditions merit. Even if we get the full six inches of rain predicted this doesn't seem necessary to me. Whatever they want, hurricane preparation is more to make people feel better than to actually out-think a force of nature. 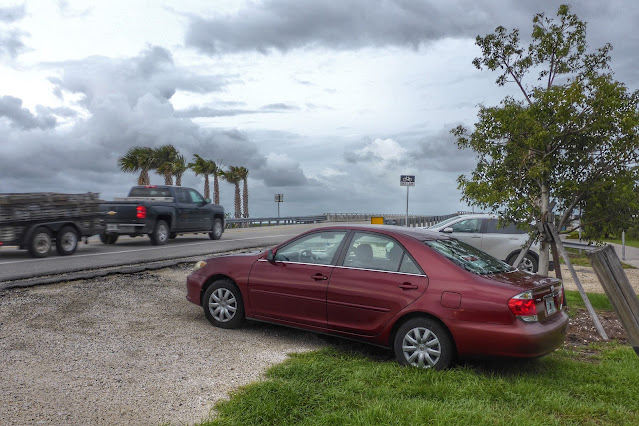 I looked south on my way home from my last dog walk with Rusty (we got soaked in a sudden shower which didn't stop us) the seas were flat as expected. Havana was getting the rain and we were getting a little wind. 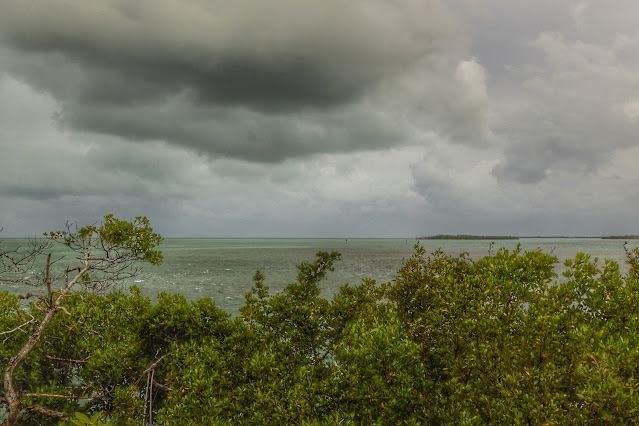 I had thought about spending the night at work so I drove in aboard Gannet 2 thinking I might hunker in the van and be at work for my six o'clock shift Tuesday morning. In the event the afternoon was so still and calm and utterly dull I would have felt like a total idiot setting up camp with a Lean Cuisine in the police station parking lot with my wife, my dog and a proper kitchen with pork chops and roast potatoes 25 miles away. I drove home. 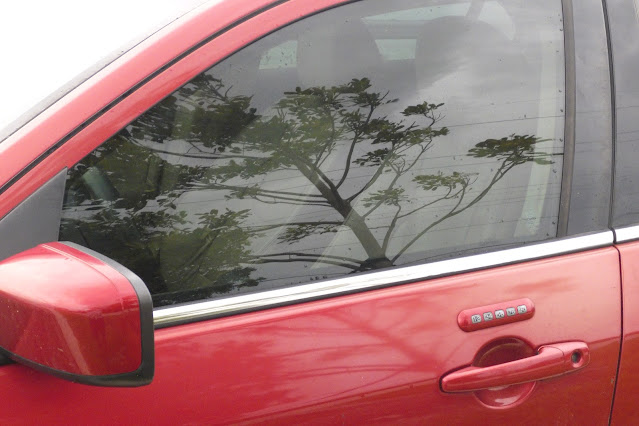 I drove in to work this morning at five in the expected rain and wind and the Fiat 500 handled the conditions just fine. It was actually quite pleasant having the Overseas Highway to myself. Put some rain on the road and everyone starts to act like it's a snowdrift crawling along and peering through the windshield like modern tires can't handle rain . City offices are closed and most people get a post Fourth of July pause today. As usual the National Hurricane Center predictions came through, furthermore we never even had a power outage as Keys Energy has built a system designed to brush off mere tropical storms. They are now warning of floods on the mainland and I see pictures of people stuffing sandbags. Much fun no doubt. 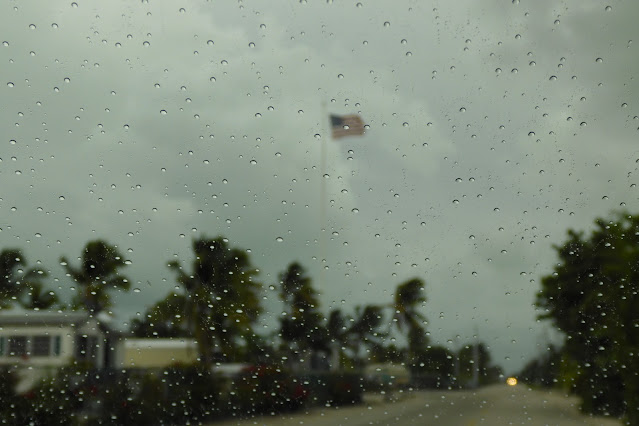 I hope Tropical Storm Elsa is the worst we get between now and November.
Posted by Conchscooter at 12:00 AM 2 comments: