Standing on the dock at what used to be known as the Westin resort (nee Hilton) the hand held camera managed a picture that more resembled a painting than what I seek,  a representation of what I see, which is to say a form of reality. There was a dreamy quality in the shaded tones of yellow against the black of night of the Margaritaville Resort and boat basin: 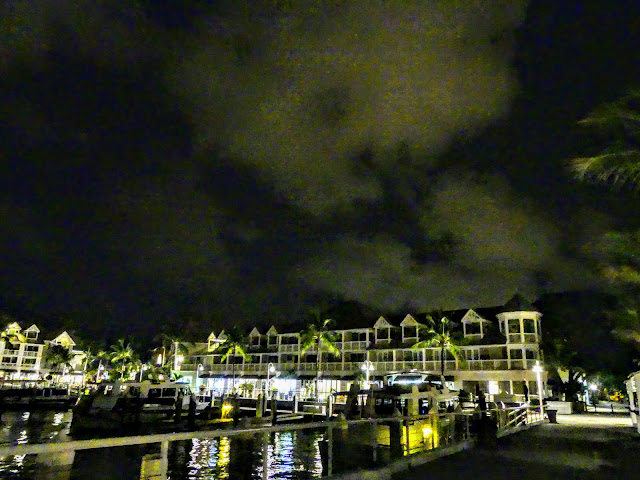 I used to work on the waterfront here, riding my scooter across town from Sunset Marina where I lived on my boat. When this place was the Hilton the scooter parking was a free for all though now it is all locked up and severely restricted: 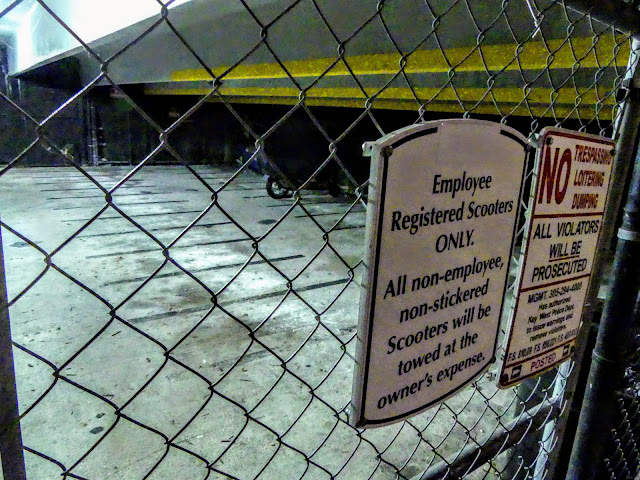 It was hot work running a sailboat any day the tourists wanted to go for a sail and some days there was no wind and much sweat, which came and went like the tips did as well. When I walk Key West these days I see scabby paint and dusty shop windows and gardens flourishing amid the mold and neglect of a town that seems to have no respect for the money the visitors bring. This sort of lack of attention to detail seems to me to show no respect to the people who bring the money: 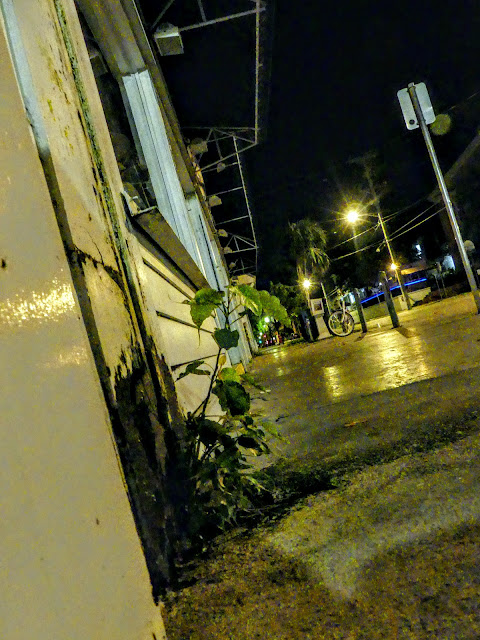 I have perhaps too much time on my hands walking Rusty and thinking. Before people wake up the air is cool and the streets are empty and I like it that way. I have long since wondered too about bus routes. Sometimes people call the police trying to figure out where they can catch a bus out of town. I have to confess the schedule is complicated if you don't know the places mentioned, but the route is incomprehensible. None of the buses in town or shuttling up the Keys seems to travel Key West in any logical form whatsoever. You need to be a chess master to figure bus routes out. I wonder why? 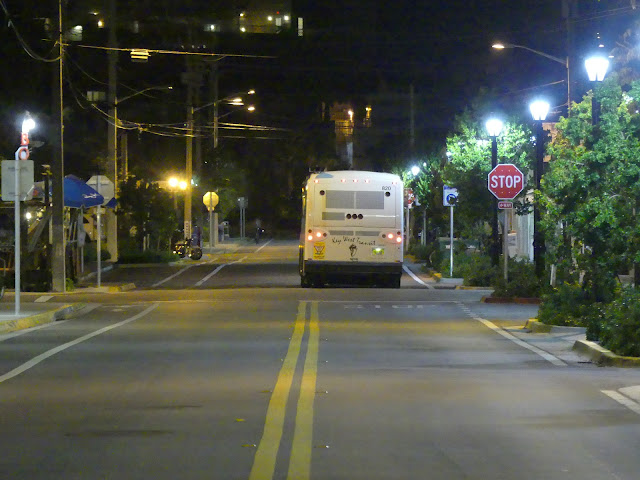 I posted this one on Instagram, not just for the mural but for the sentiment. Anyone who begs for used clothes is some form of hero. In my world they are but in the world of work they are barely noticed, the people who make the machines go. 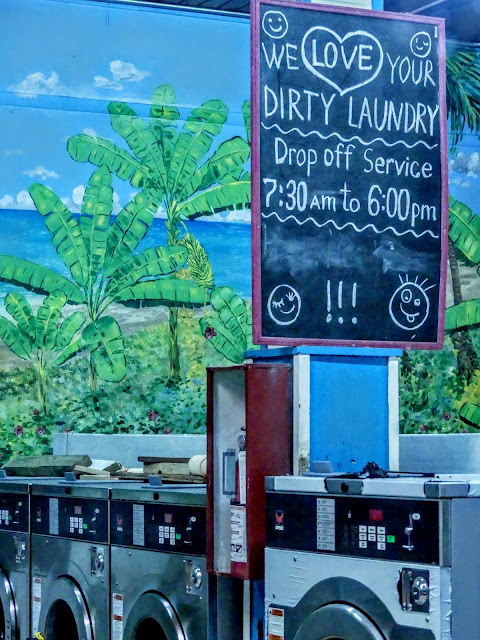 There has been so much noise about Lyft and Uber being allowed into Key West by a  new state law, that I fear  disappointment may follow in it's wake. I don't think the people who created Lyft and Uber much care about employment law but there again cab companies don't seem to do much better. True they provide the cars but drivers have to earn more than hundred bucks just to pay for the car plus fuel so the ride share model seems pretty similar. Its not like Key West cab drivers are union hires with benefits losing out to weird millennial style part time workers using their own cars. I find it hard to work up any enthusiasm for the Uber versus cab wars one way or the other. 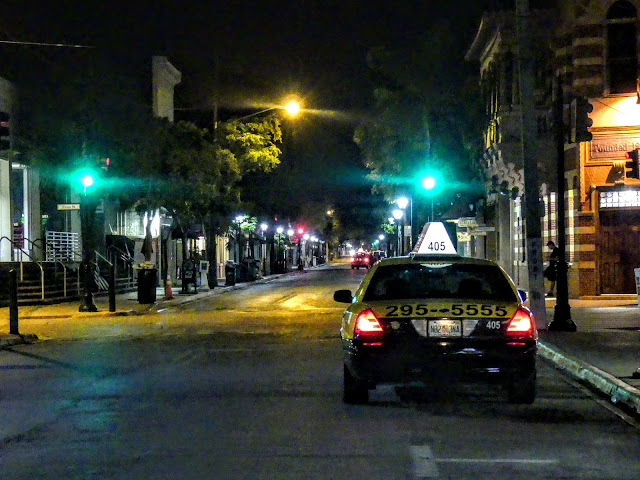 I find that Duval releases a sense of reassurance after hours, the lighted windows the serene empty sidewalks tell me things will keep on keeping on. During the day the hustle and the crowds tend to overwhelm but while Rusty checks his things out I have time at this hour, before six in the morning, to see Duval not stressed. 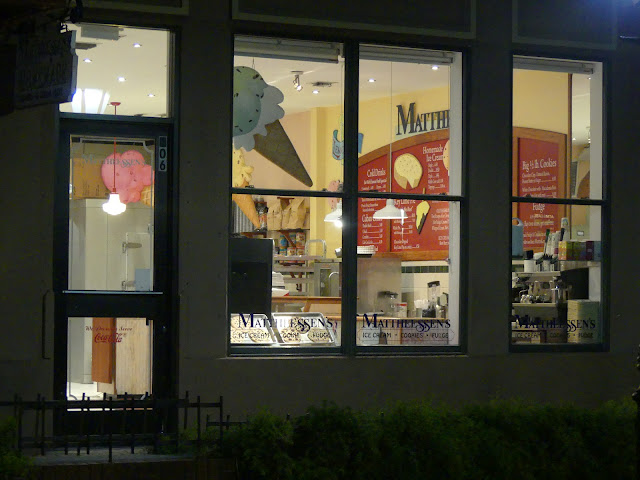 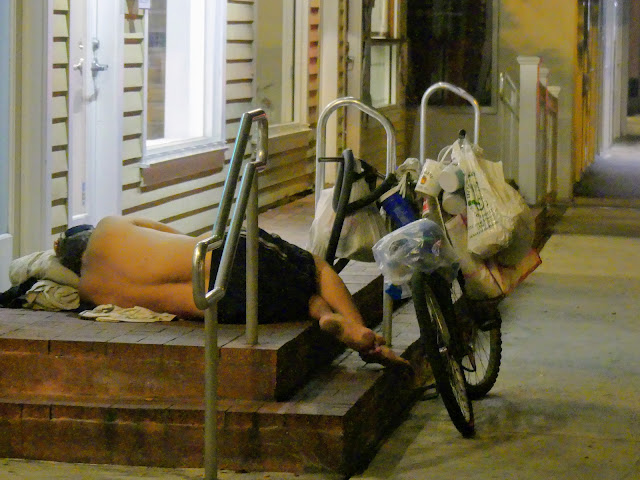 The workaday world of Key West, at night.
Posted by Conchscooter at 12:00 AM No comments: Links to this post