I was at work Wednesday taking my CPR class when someone mentioned a lightning strike earlier that morning. Lightning strikes are fairly common in Florida and I know of at least one police car that has been hit in the past few years. It turns out this time, the strike that made headlines was a friend of mine riding his motorcycle, a police Harley Road King. The officer ended up spending the night at the hospital. 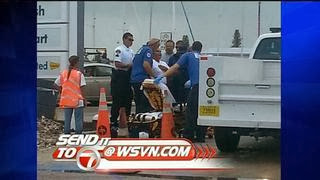 The lightning bolt made a Taser feel like an ant bite.

That's how Key West Police Department motorcycle patrolman Deglys Chavarria described the strike that hit him after apparently bouncing off a nearby sailboat Wednesday on North Roosevelt Boulevard.

"There was a big flash that came right out of the handlebars that knocked my hands off," Chavarria said Thursday afternoon from his room at Lower Keys Medical Center. "There was a small pause, and then my adrenaline got going and I looked at the newspaper lady I was just talking to -- her face, she had this look -- and I knew I had to get the bike out of the street."

Somehow the 27-year-old on-duty officer kept his motorcycle upright and moved it near the sidewalk at the Shell Station at Palm Avenue and First Street.

Out of traffic, he quickly checked to make sure he still had all his digits, and then "searing pain ran from my shoulder all the way down to my seat."

Chavarria found a way to chuckle about it.

"The ironic part is I was on my way to the station to get my patrol car because of the weather," he said.

The officer was awaiting MRI scans after being under observation for 24 hours, but hoped to be out of the hospital by Thursday evening and back to work soon.

"My vitals are fine," Chavarria said. "They've had a heart monitor hooked up to me since I got here. Everything is good so far. I just want to get back to work."

He was happy to apparently be OK.

"I'm very, very fortunate and grateful to everyone who stopped and helped," Chavarria said. "The (Citizen) hawker who helped me and everyone who came out of the gas station and the drivers who stopped; it was very reassuring. Really awesome."

The hawker was Lou Ann Carnell, who described a flash of light so close she turned her head away

Chavarria is an active Police Athletic League officer who has been a visible volunteer at many youth activities in the past few years.

"I didn't get any superpowers, that's for sure," he said of the lightning strike, laughing.

Chavarria, who was a police Explorer in high school, started at the Key West Police Department as a dispatcher in 2005 before becoming an officer in 2009, said police spokeswoman Alyson Crean. He's a native of Nicaragua who grew up in Key West.

Meanwhile, also Wednesday, a construction worker in Naples, Fla., died at the scene after being struck by lightning while climbing down scaffolding, according to The Associated Press.

The National Weather Service has recorded two fatal lightning strikes in Florida so far this year. The state led the country in such deaths last year, with five, AP says. 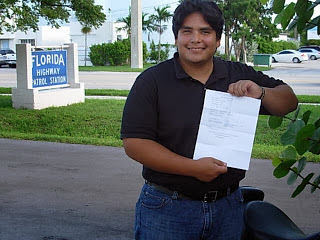 It was a few years ago that Deglys and I rode over to the DMV in Marathon where he took, and passed his motorcycle endorsement test. He was a dispatcher at the time and waiting for his citizenship papers to arrive. He was born in Nicaragua but came to the US with his parents as an infant and became a US citizen. He joined the explorers a decade ago and policing has been in his blood, so I was not surprised when he quit dispatching to beocme an officer, which is known as "going on the road," in the police station. 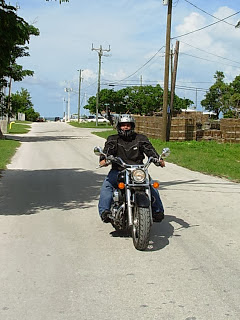 He talked about riding all the time so I wasn't surprised when he applied for the traffic officer position and was trained to ride a Road King for the department. I don't think he will be off the road for long, lightning strike or no. 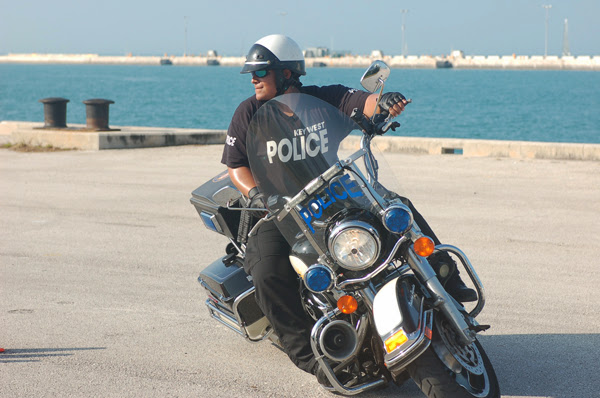 In the event of a thunderstorm the general advice in south Florida is to get out of the water and take cover. A car is considered an excellent Faraday Cage to safely dissipate lightning's electrical power but a motorcycle I figured would be neutral, especially as it runs on insulating rubber...I guess I was wrong! Live and learn and I'm grateful to Deglys for another lesson learned -half my age and twice as smart.﻿
Posted by Conchscooter at 12:00 AM 4 comments: