Vespas Around The World

When I bought my Vespa in Iowa a couple of years ago I planned to have it mechanically refreshed if not restored not least because I wanted a reliable commuter but also because I grew up in the belief that an old style two stroke Vespa is one of the most sensible and reliable touring bikes available. I love my Bonneville, 84,000 miles in 7 years attests to that and it runs fine, but in the Keys 65hp is a steam hammer to crack a nut. The motorcycle I love to ride encourages me to ride like a hooligan in a society where 55 whole miles an hour is going real fast, and with modern acceleration and brakes anyone can dice and slice city traffic like its not there on even a relatively slow motorcycle like mine. Its just not a good way to ride at my venerable age, I should know better and my wife's 2004 automatic Vespa showed me the way to keep civilized. I thus figured that taking a 35 year old nostalgia scooter and making it "as new" could work and I am starting to think my plan is paying off. I'm not sure my middle aged responsibilities will allow me to repeat my 1981 trip coast-to coast, but who knows? It would be easy in retirement, a period to close the life I chose that began with that six month ride...

So it occurred to me that because I ride an "antique moped" in a world dedicated to traction control, ride by wire, electronic suspension, swiveling headlights, automatic braking systems and total environment control my pleasure in riding a biplane daily may seem willfully stupid or eccentric at best. I find it liberating and sensible and I am not alone.


Then there is my hero, the amazing Roberto Patrignani who raced motorcycles, wrote about them and traveled all over the world on unsuitable machines. For some reason Italians are particularly good at riding Vespas in improbable places and I grew up on a diet of such adventures, so to me the idea of an elderly two stroke scooter as a travel adventure machine makes perfect sense. Low maintenance, low cost, easy to ride and easy to lift up when it falls over, equipped with a spare wheel and a fan to keep the engine cool these simple rugged machines epitomize freedom to me. And I'm not alone. check the modest partial list below: 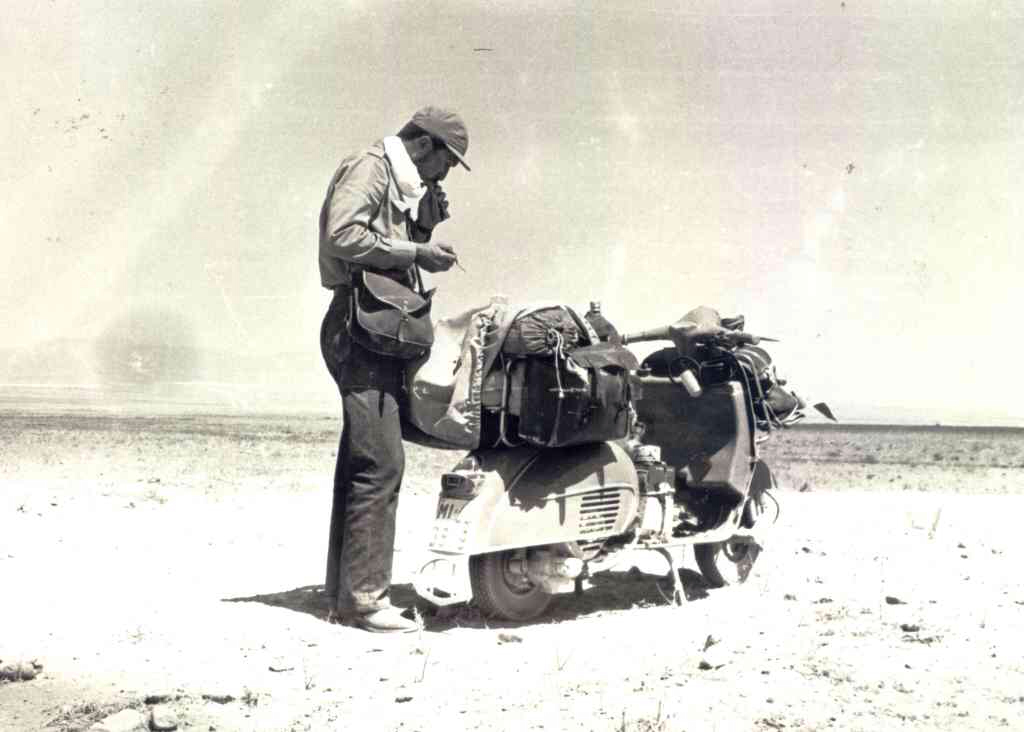 General Lee, 50cc Around the World
Giorgio and Giuliana Serafino scraped some money together and bought an old farmhouse and use it as their base of operations to see the world continent by continent. They've crossed the US, Africa and parts of Asia after figuring their stuff out touring Europe. All on a scrapped 50cc Vespa Giorgio restored in his shed.

This intrepid couple are tougher than I could ever be, touring with 50ccs but they have done it and they have the pictures to prove it on their Italian language website with the photos HERE.

I have been trolling the web looking for stories of  intrepid  derring-do on old Vespas. Here, underneath the mound of clothes we have Missmoletta Marineo of Milan on a 125cc small bodied Vespa Primavera. She took not one but two trips to winter rallies, the larger one is famous in Germany as the Elephant Trek attracting up to 5,000 riders. To her credit  she reports in the Italian motorcycle magazine Motociclismo  that she took a tent, as you do, despite hating the cold, and she looked with barely veiled contempt on people who trucked their motorbikes to within twenty miles of the rally to complete the journey in style.

Stergios  Gogos -Around the World  in Greek

On his  blog page partly in English (LINK) you can read how Stergios left  Greece  disillusioned by the appalling economic situation and spent a year and eight thousand bucks traveling across Africa very slowly to save fuel on his Vespa P200. The scooter has about 120,000 miles on it and Stergios, who bought it lightly used at 45,000 miles (!) says he has never had any mechanical problems. He's now in South America starting to make his way north.

La Vida Vespa  by Markus
This German's exploits are particularly close to my heart as he rides the exact same type and year Vespa that I am riding, a 1979 P200...

On his English language website (link) Markus also known as Don Calvo (which means bald in Italian, the language of Vespas), says he traveled  13,000 miles across 31 European countries.

Vesparicana Atze Through The Americas

A young German lad took off for the Americas and rode Alaska to Patagonia on what I consider to be a grossly overloaded Vespa 125 ex-Postal Service. He had a few mechanical issues, notably the suspension which is hardly surprising when you look at his load...His blog is very efficiently translated into decent English.

Journey done the intrepid scooterist (this one too is bald!) and his machine are home in Cologne in Germany, so I guess he wasn't overloaded after all! (This picture is from when he took off): 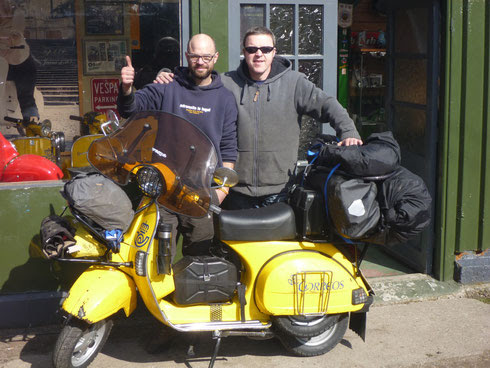 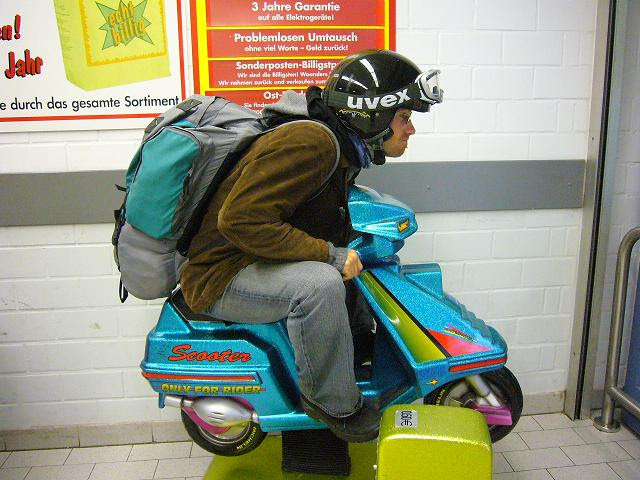 These two guys had altogether too much  fun being youthful and silly riding around the Mediterranean in their BLOG. They like their Vespas which gave them some trouble but nothing they couldn't handle. Lots of good pictures, not so much great commentary but think of them as frat boys on the loose. 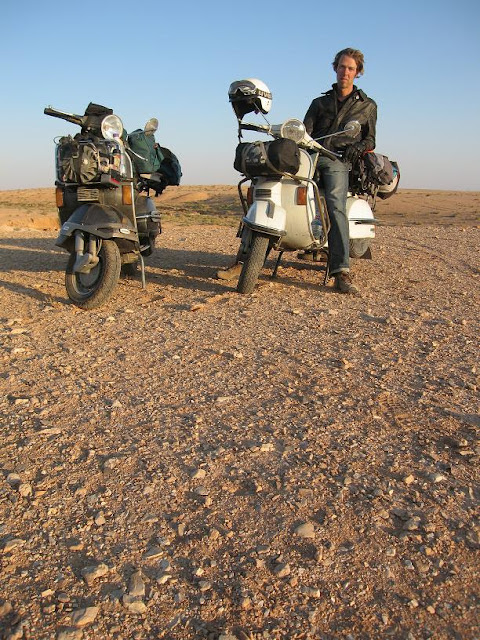 Its a Vespa 150 built in 1970 that Illario had previously ridden all over Europe and Turkey. Then he decided to ride from New York to Alaska to Patagonia over the course of two years. His blog is down but his travel photos are HERE. 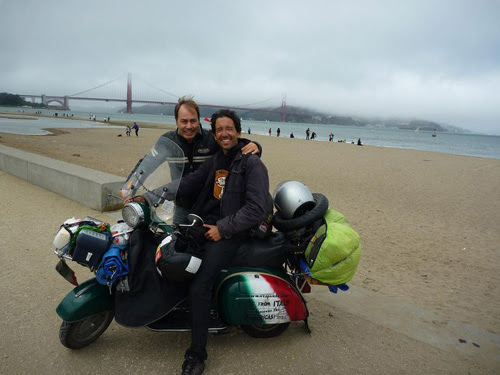 Not surprisingly he  says his inspiration for his 45mph journeys (! a bit slow for me...) is the late Giorgio Bettinelli, a well known world traveler by Vespa in his native Italy. 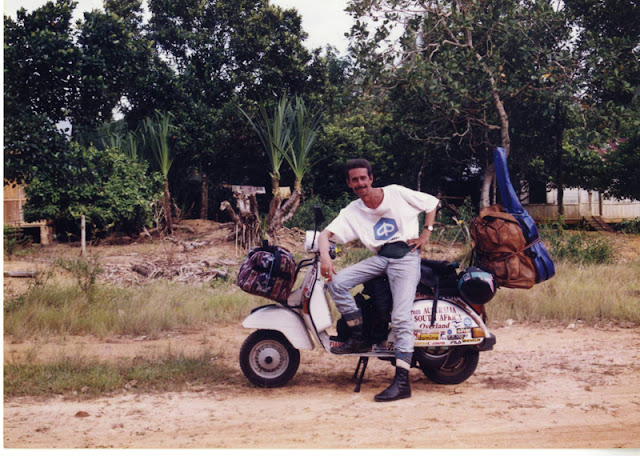 Its worth noting that he had no mechanical aptitude whatsoever and he went riding for tens of thousands of miles at a time. He married a Chinese woman and settled in China where he got ill and died suddenly while touring with a modern Vespa donated by the factory after decades of free publicity. There is a fantastic tribute to Bettinelli HERE and The Scooterist website has lots of pictures of scooters, riding in Vietnam and historical pictures of  Vespas in that country.

I came across one American willing to step up to a Vespa after a life time girdling the globe on "proper motorcycles.

He's been around the world half a dozen times but he also decided to take on the dirt roads of Thailand on a very elderly three speed Vespa. A great adventure honestly chronicled here: Motorcycle USA.

On this Facebook page you can read about a group of Modern Vespa riders crossing the USA and ending up in Key West. I had hoped to meet them but I had no luck and am limited to their Facebook Page.

Anything is possible with the Italian scooter that could. I prefer the older models for their simplicity and proven reliability. My old 200 model gets  a solid sixty miles an hour without modifications which is enough to keep up with traffic and enjoy scenery on the back roads. Freeways for this kind of travel are unnecessary. So next time you see pictures of my elderly ride on the road remember I'm not alone and there may well be method to my madness.

This Canadian couple has no visible website, but here's what I found in the press:  LINK and more recently: LINK

Of course if you want to find stories of people riding modern four stroke Vespas, Google Search is your friend, especially:

Personally I find the prospect of riding a complex computer driven modern scooter long distances rather more daunting, but I am a creature of my generation. I hope this is all food for thought if you thought you knew all there is to know about idiots riding "mopeds."

Orin at Scootin Old Skool also ran my story on his well known blog:  Scootin' Old Skool about the whys and wherefores of my choice in three parts.