Garrison Bight is a brilliant marina setting if you want the most protected marina and easy access to all the city has to offer, as it is situated on the north shore in-between Old Town and New Town. Just like everything else in your life it is a compromise because that lubberly convenience makes it a bit of a trek to get your boat anywhere interesting. Unless of course you have a high powered center console with low bridge clearance and fast planing speeds. For everyone else you are about an hour from Mallory Square. 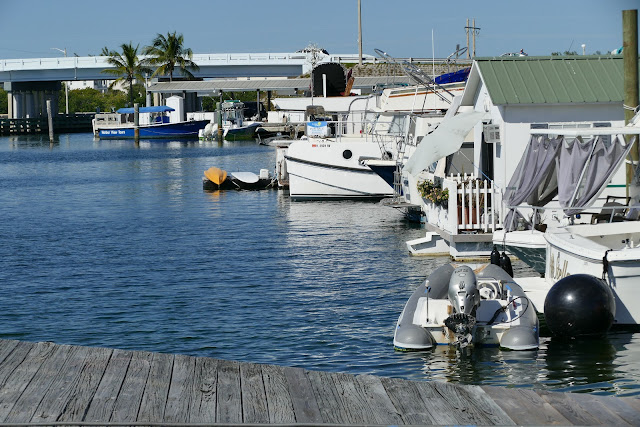 There is traffic on the roads that parallel and bisect the marina and from time to time people with cameras wander by trying to find shadows and light to wile away a sunny lunch break. 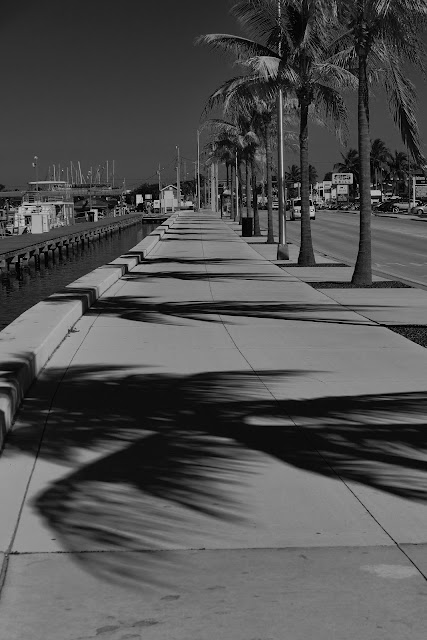 This has been a winter of rain and gales interspersed with sunshine and cool crisp days so I should not have been surprised to see a boater in long sleeves and well buttoned up though around here t-shirts are the year round costume for the active boating lifestyle. 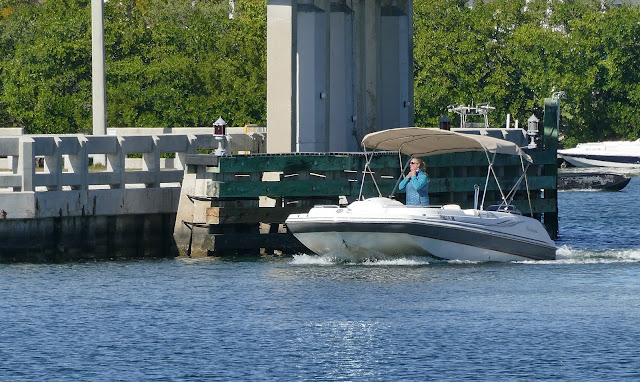 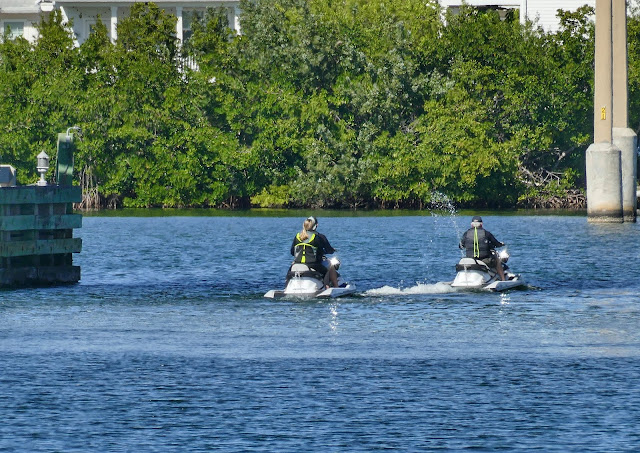 I never really noticed  the pump  in the bow of the fire boat before but peering down from the sidewalk it looked fearsome and very industrial. What a strange and particular specialization: making fire boat pumps and nozzle sprayers. 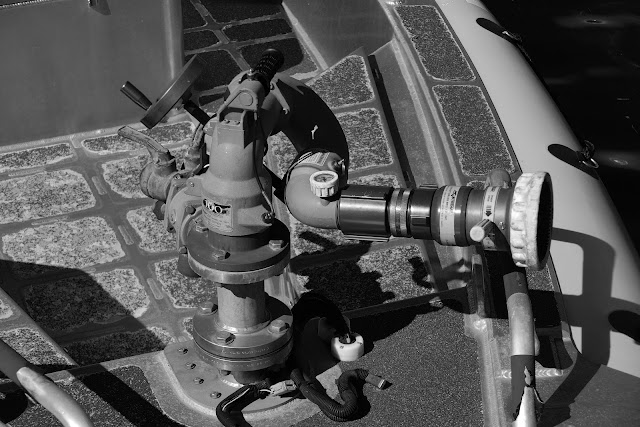 I strolled across to Eisenhower Drive after I had squeezed the last bit of entertainment out of the waterfront and I saw an unfamiliar face: 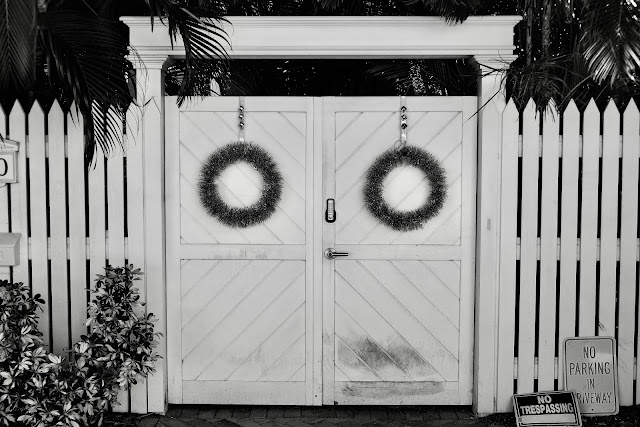 I never cease to be amazed how much stuff I get to see in such a small space. I know people who live in Key West and don't have the least curiosity about things half way across the island. I was listening to two colleagues debating the layout of a new pocket park in town, and when I say new I mean a few months old. Neither had been by the look but both had opinions.  I was there in November, but I said nothing. 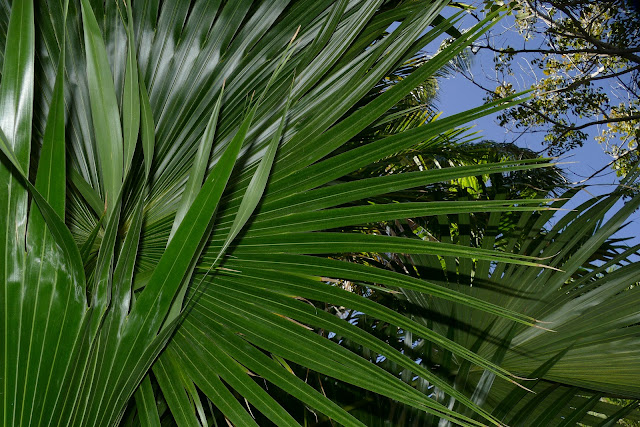 I find myself getting older but never less curious about life which i think can be very annoying to the people forced into my orbit and who themselves couldn't care less what the currency of Mongolia is or how the Japanese tea ceremony unfolds or why France owns the Kerguelen islands. So I wander the city on my lunch breaks and I wander Google between calls for service. 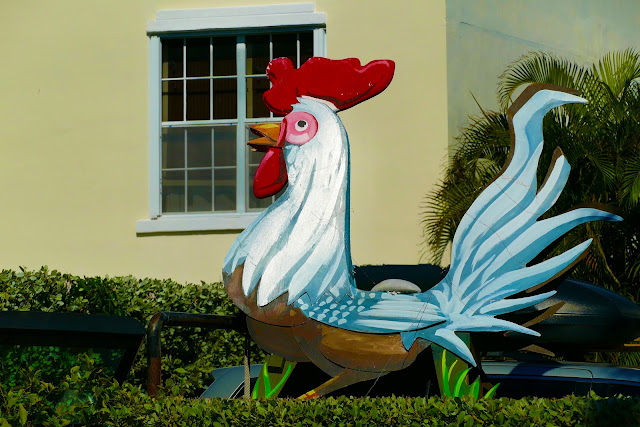 When my wife and I go to the UK next month it will only be for ten days (without Rusty! That's agonizing) and my sister will be the tour guide for most of it. However I have been looking at bits of England where I lived as a boy and wondering what my wife will make of Leith Hill and Dorking and the weirdly typical English lanes I used to bicycle along. And it occurred to me that in the decades before the Internet and street view and during those glorious years of unfettered net neutral Google you could learn more bout a place in an hour than previously in half a life time. 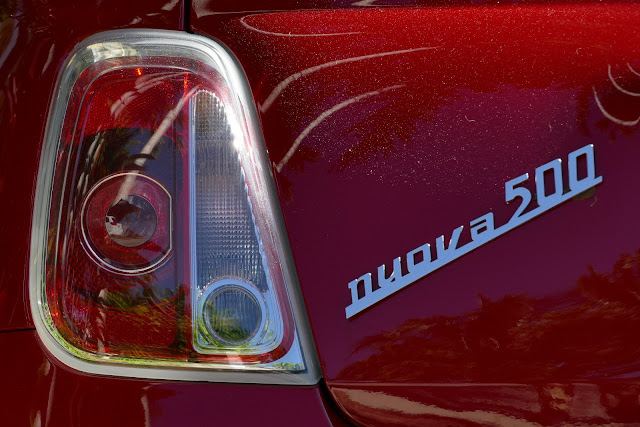 That sort of thinking puts my own feeble efforts to uncover key West and the Lower keys into perspective. I wonder what street view will reveal about Key West after we've finished traveling in retirement and plan to come back?
Posted by Conchscooter at 12:00 AM 2 comments: