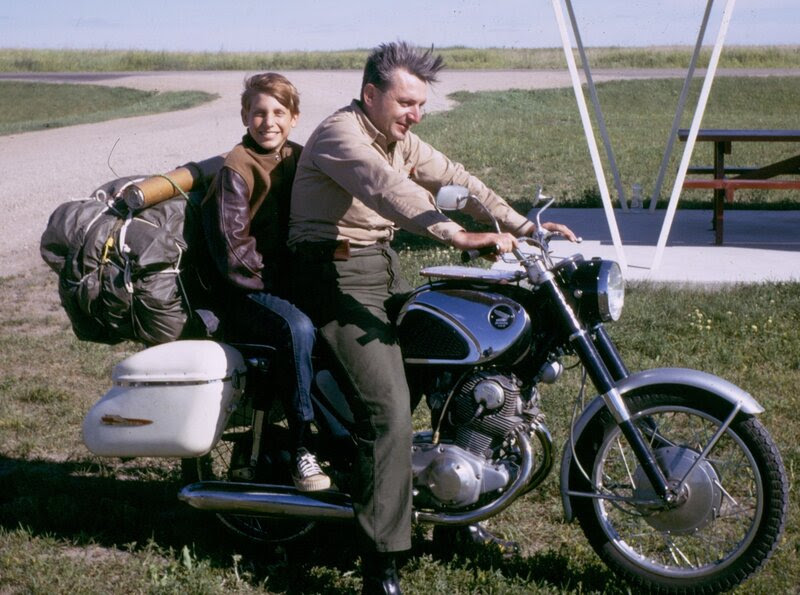 Robert M. Pirsig, who inspired generations to road trip across America with his "novelistic autobigraphy," Zen and the Art of Motorcycle Maintenance, died Monday April 24th 2017 at the age of 88.
His publisher William Morrow & Company said in a statement that Pirsig died at his home in South Berwick, Maine, "after a period of failing health."
Pirsig wrote just two books: Zen (subtitled "An Inquiry Into Values") and Lila: An Inquiry into Morals. 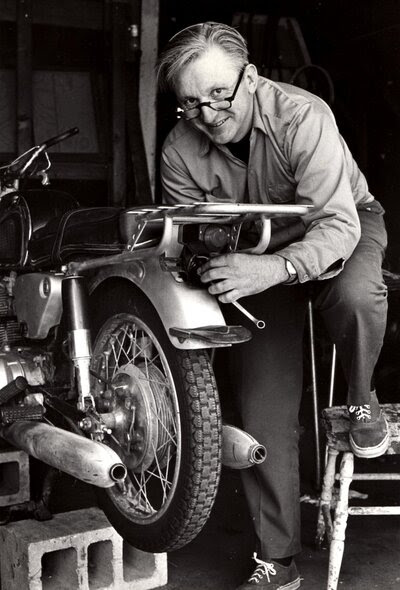 Author Robert Pirsig works on a motorcycle in 1975.
William Morrow/HarperCollins
Zen was published in 1974, after being rejected by 121 publishing houses. "The book is brilliant beyond belief," wrote Morrow editor James Landis before publication. "It is probably a work of genius and will, I'll wager, attain classic status."
Indeed, the book quickly became a best-seller, and has proved enduring as a work of popular philosophy. A 1968 motorcycle trip across the West with his son Christopher was his inspiration.

An excerpt from the first chapter of the novel:


"What I would like to do is use the time that is coming now to talk about some things that have come to mind. We're in such a hurry most of the time we never get much chance to talk. The result is a kind of endless day-to-day shallowness, a monotony that leaves a person wondering years later where all the time went and sorry that it's all gone.

Now that we do have some time, and know it, I would like to use the time to talk in some depth about things that seem important. What is in mind is a sort of Chautauqua...that's the only name I can think of for it...like the traveling tent-show Chautauquas that used to move across America, this America, the one that we are now in, an old-time series of popular talks intended to edify and entertain, improve the mind and bring culture and enlightenment to the ears and thoughts of the hearer.

The Chautauquas were pushed aside by faster-paced radio, movies and TV, and it seems to me the change was not entirely an improvement. Perhaps because of these changes the stream of national consciousness moves faster now, and is broader, but it seems to run less deep. The old channels cannot contain it and in its search for new ones there seems to be growing havoc and destruction along its banks.

In this Chautauqua I would like not to cut any new channels of consciousness but simply dig deeper into old ones that have become silted in with the debris of thoughts grown stale and platitudes too often repeated. ``What's new?'' is an interesting and broadening eternal question, but one which, if pursued exclusively, results only in an endless parade of trivia and fashion, the silt of tomorrow.

I would like, instead, to be concerned with the question ``What is best?,'' a question which cuts deeply rather than broadly, a question whose answers tend to move the silt downstream. There are eras of human history in which the channels of 8 thought have been too deeply cut and no change was possible, and nothing new ever happened, and ``best'' was a matter of dogma, but that is not the situation now.

Now the stream of our common consciousness seems to be obliterating its own banks, losing its central direction and purpose, flooding the lowlands, disconnecting and isolating the highlands and to no particular purpose other than the wasteful fulfillment of its own internal momentum. Some channel deepening seems called for." 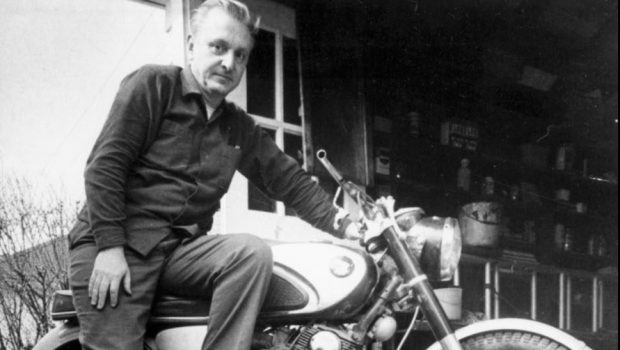 My buddy Jack Riepe, a scribe himself of no mean repute grumbles that after ten pages of this classic hippy tripe he got bored, put he book down and gave up on his first plan when he was given a copy of the book. He wanted to imitate the  novel's bestseller style in order to make himself a fortune just like Pirsig. Unlike Riepe I liked Zen and found it to be a revelation for my young self. In those days there was no internet so what I gleaned from the book about the author was all I knew and the story was the story with no access offered to explain further details about Pirsig and his tortured psyche.

I pretty much ignored the stuff about how to lose your mind and gain it back but the discussion about Quality and coping with mechanical failure I took to heart and found great relief in discovering that I was not the only amateur motorcycle traveler who had ever got hung up on and stripped on recalcitrant fastener while trying to accomplish a roadside repair. Pirsig gave me a new appreciation for how to overcome roadblocks be they ever so small, and to take  the time to study the problem before trying to tackle the solution.

The effect of this philosophical tome might be described as being rather lightweight in my life but it didn't feel that way and in many respects I still feel comforted by Pirsig's vision of life metaphors expressed in terms of motorcycle repairs. For the past 40 years motorcyclists everywhere have discussed and quoted and critiqued Pirsig's discussion of Quality as though the background of a motorcycle trip to Montana makes the points raised purely a motorcycling issue. It really isn't as Quality or lack of it is what flustered Pirsig into writing the book. His descent into madness, in the third person, is part of his pursuit of Quality, much derided by his haters.

"The mechanic's feel comes from a deep inner kinesthetic feeling for the elasticity of materials. Some materials, like ceramics, have very little, so that when you thread a porcelain fitting you're very careful not to apply great pressures. Other materials, like steel, have tremendous elasticity, more than rubber, but in a range in which, unless you're working with large mechanical forces, the elasticity isn't apparent.

With nuts and bolts you're in the range of large mechanical forces and you should understand that within these ranges metals are elastic. When you take up a nut there's a point called ``finger-tight'' where there's contact but no takeup of elasticity. Then there's ``snug,'' in which the easy surface elasticity is taken up. Then there's a range called ``tight,'' in which all the elasticity is taken up. The force required to reach these three points is different for each size of nut and bolt, and different for lubricated bolts and for locknuts. The forces are different for steel and cast iron and brass and aluminum and plastics and ceramics.

But a person with mechanic's feel knows when something's tight and stops. A person without it goes right on past and strips the threads or breaks the assembly. A ``mechanic's feel'' implies not only an understanding for the elasticity of metal but for its softness. The insides of a motorcycle contain surfaces that are precise in some cases to as little as one ten-thousandth of an inch. If you drop them or get dirt on them or scratch them or bang them with a hammer they'll lose that precision. It's important to understand that the metal behind the surfaces can normally take great shock and stress but that the surfaces themselves cannot.

When handling precision parts that are stuck or difficult to manipulate, a person with mechanic's feel will avoid damaging the surfaces and work with his tools on the nonprecision surfaces of the same part whenever possible. If he must work on the surfaces themselves, he'll always use softer surfaces to work them with. Brass hammers, plastic hammers, wood hammers, rubber hammers and lead hammers are all available for this work. Use them. Vise jaws can be fitted with plastic and copper and lead faces. Use these too. Handle precision parts gently. You'll never be sorry.

If you have a tendency to bang things around, take more time and try to develop a little more respect for the accomplishment that a precision part represents."

I suspect some of my fondness for this book and its mixture of motorcycle travel and philosophy stems from the fact that I read it and had my mind expanded when I was young and to re-read Zen is to travel back in time in a more perfect way than it was at that time... And I also believe that the issues he raised back the n about Quality in our society are more relevant than ever in the Internet Age. I wonder if the youngsters I work with could ever be persuaded to read and ponder this weighty subject. I expect they are too busy with their phones.